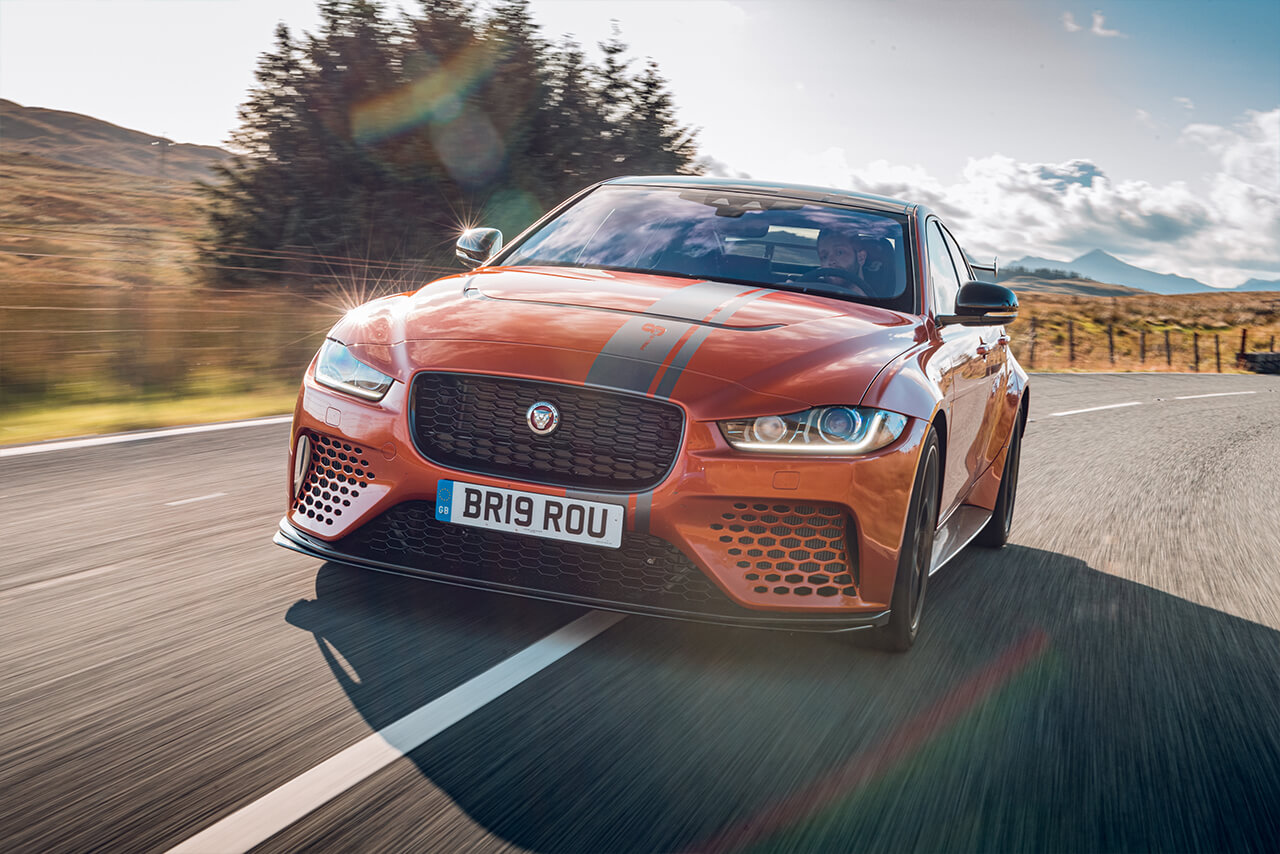 7 minutes 18.361 seconds – that’s the time it took to get the Jaguar XE SV Project 8 around the Nurburgring, 12.9 miles of the most challenging racetrack to exist on the planet, shattering the previous record set in 2017. What car held the previous record? Another Project 8. Life is occasionally not-so-tough at the top.

That supersonic time is significant not just because it makes the Project 8 the fastest 4-door car in the world, but it means it beats some colossi of the performance car world in the process, The Ferrari Enzo & 812 Superfast, the Pagani Zonda F, and the BMW M4 GTS have all had their times & egos fall victim to the Project 8 – impressive in a car that you can take the wife, dog and kids to the shop in, in relative comfort. 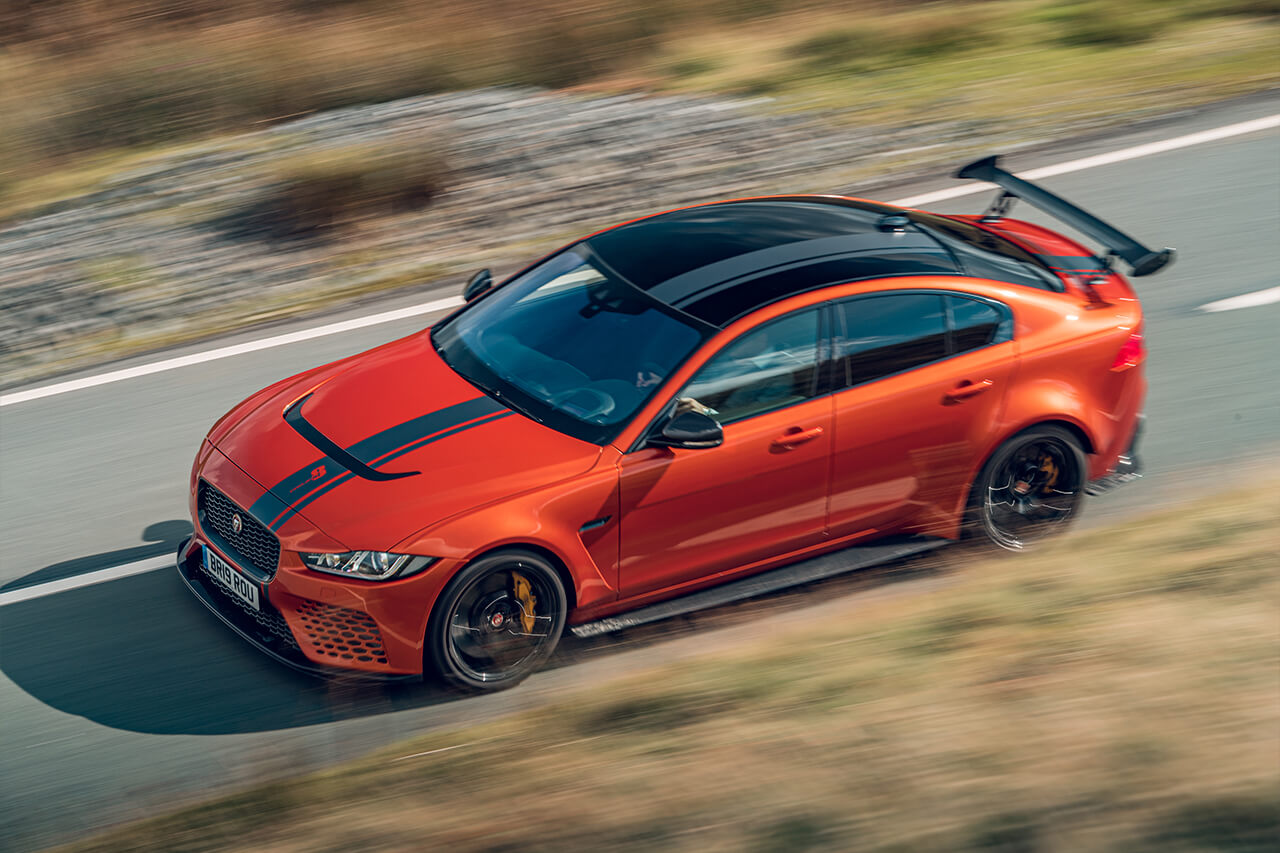 It doesn’t hide its performance either. Other speedy saloons opt for subtle ‘Q-Car’ styling. Not so on the Jag. The ostentatiously flared rear arches are partially uncovered at the back of the car – this means you can actually see halfway up the rear tyres from behind, which not only looks menacing but usefully throws stones at your beaten opponents’ cars as you leave the golf club. A huge, adjustable, carbon fibre rear wing along with surfboard-sized sills complete the unapologetically aggressive look. Think Monaco street racer rather than riviera cruiser.

Anyway, aggressive looks and stellar track performance already confirmed, what’s the car like to drive on the road? Specifically, on some of the best driving roads in the UK on the ‘EVO Triangle’ – Google it if you don’t know. 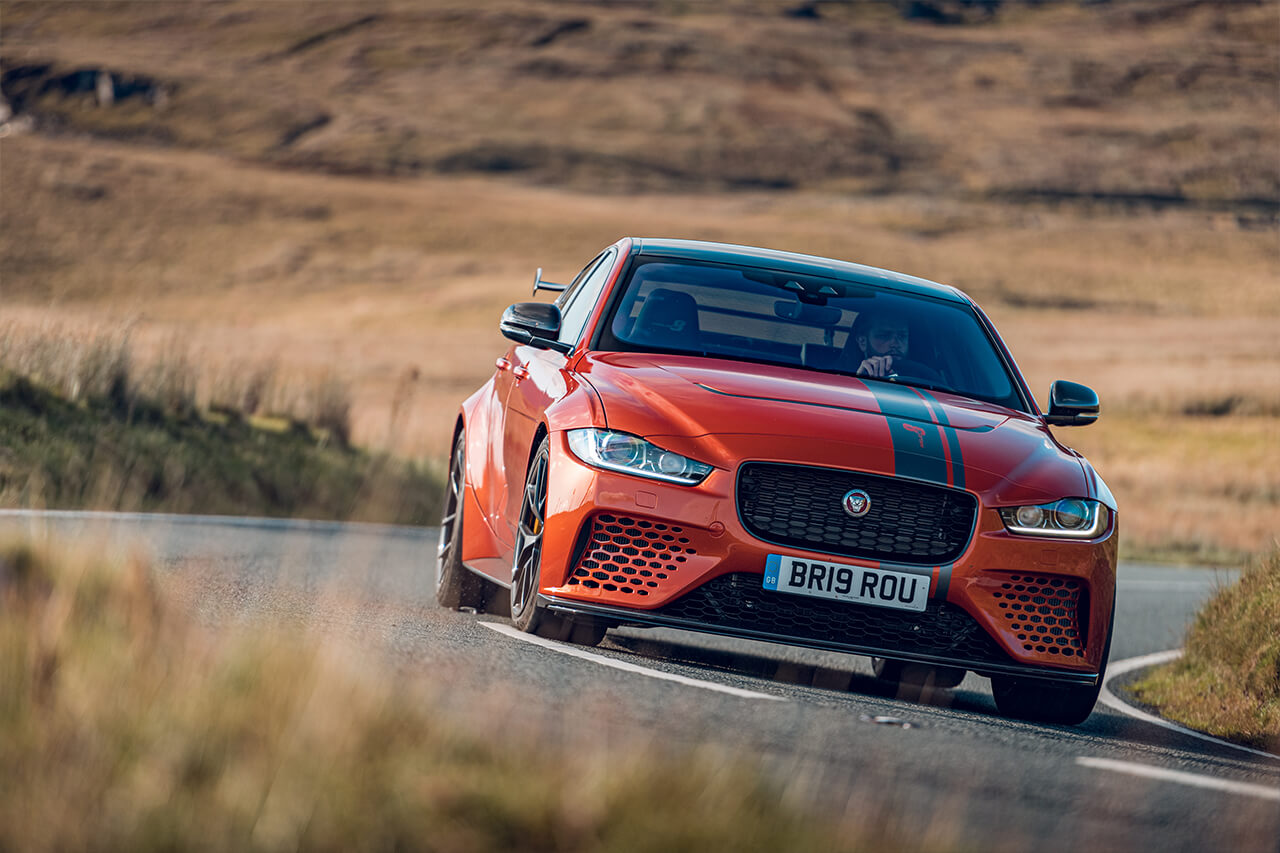 First, the sound. Sweet and holy mother – the sound. It dominates everything. Stepping on the accelerator makes the car generate a sound like you’ve kicked a wounded bear in the testicles. A deep snarl from the giant quad exhausts at the rear and a distant shriek from the supercharger in front of you make for an utterly compelling aural experience and a possible breakdown in relations with your neighbours should you enjoy early morning starts.

There’s a bite to match the bellow, too. Acceleration is as compelling as it is brutal. 60mph comes in 3.3 seconds and the Project 8 will do a bonafide 200mph – not that we could get near that on the public roads – but this thing feels supercar quick. This performance comes courtesy of Jaguar’s tried-and-tested 5 litre supercharged V8 & the 600 horsepower it chucks out, and the ZF automatic gearbox it’s connected to can change gears in as little as 200 milliseconds. 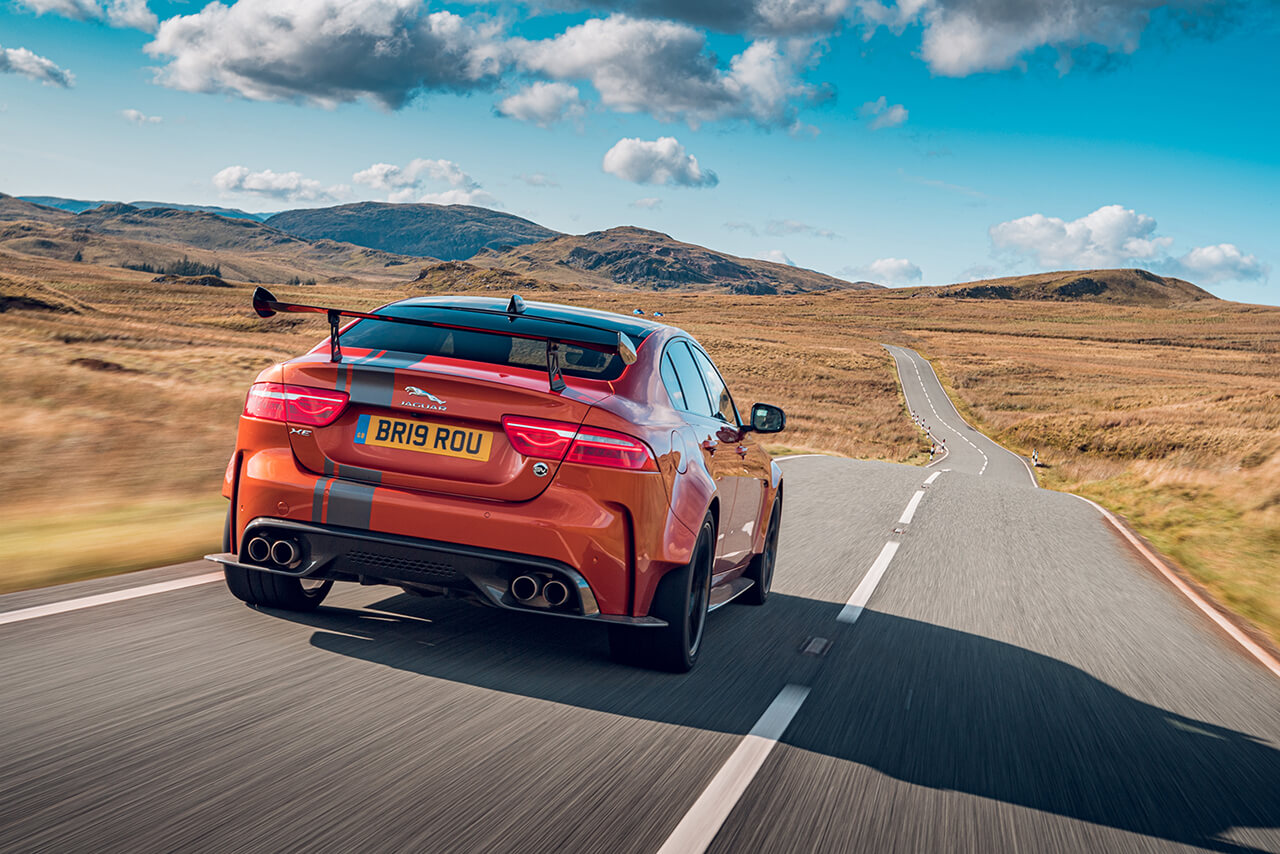 As you hit the end of your first high speed straight at potentially license-losing speeds, you’ll want to stamp on the brakes. Greeting you are huge 400mm carbon ceramic discs with huge 6-piston calipers up front, hauling the 1742kg Jag to a standstill as fast as anything else with numberplates, and crucially it can do it time and time again. I couldn’t fade them and I tried to the point of belligerence.

As impressive as the drivetrain is, the way the Project 8 handles is its party piece. It uses an extremely clever 4 wheel drive system that can send up to 100% of the power to the rear wheels and vector it around when needed. Combined with the sticky Michelin rubber, it corners better than an olympic ice skater. That Cessna-sized rear wing isn’t just for show either – it generates 122kg of downforce at 186mph. Even when pushing hard, the chassis is neutrally balanced with very little oversteer or understeer. 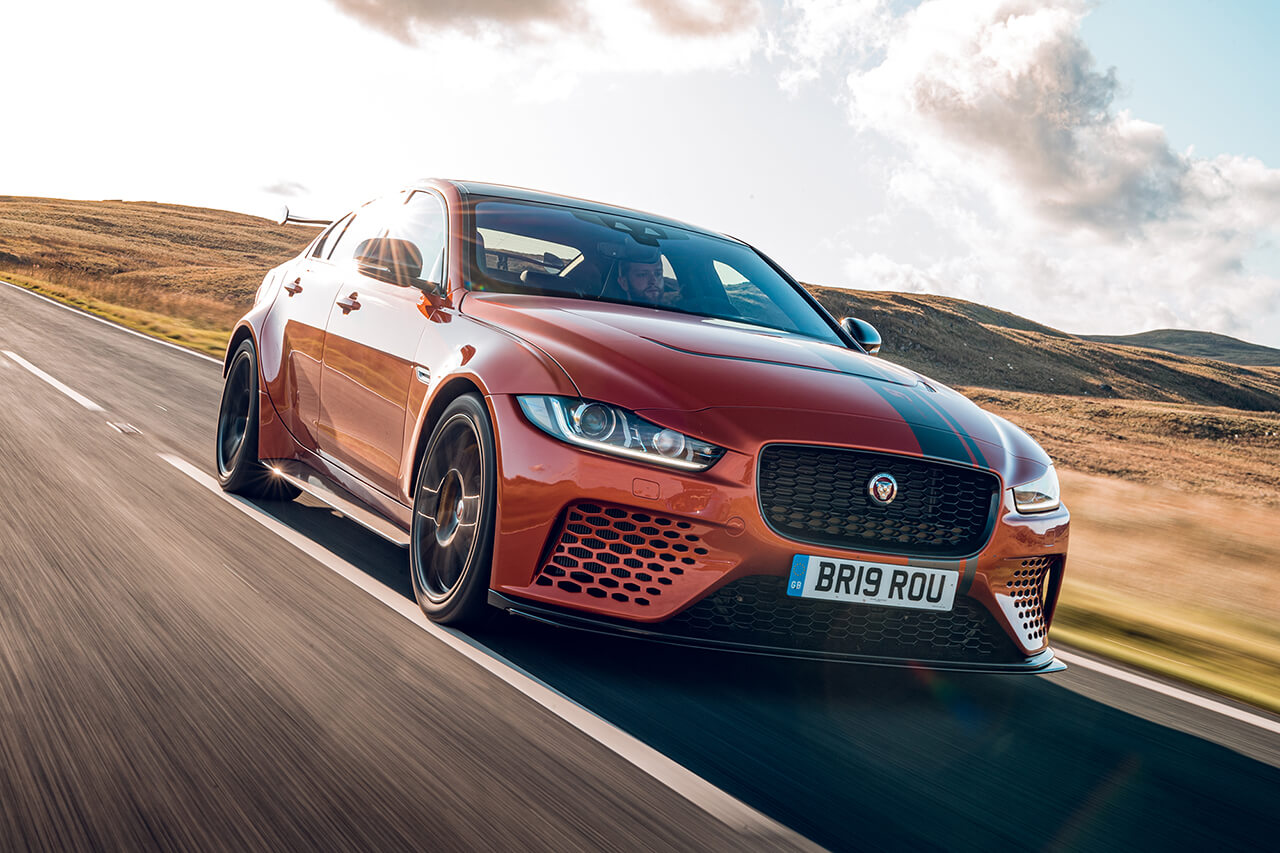 Slowing things down a bit, the Jaguar is a docile kitty. Put the car in comfort mode and it does the automotive equivalent of taking a drag on a cigarette and completely relaxes itself. The ride is firm, but not punishing. You could use this every day – it is a Jaguar XE at heart after all.

The Project 8 is available in different levels of spice, too. If you don’t want it to look too lairy you can opt-out of the rear wing with the ‘Touring Pack’ – limited to 15 cars worldwide, it limits the top speed to 186mph. If you’re slightly psychopathic and want to go the other way – then you can opt for the ‘Track Pack’. This throws away the rear seats and replaces the front ones with carbon-fibre buckets for maximum weight saving, and gives the addition of a roll cage gives maximum stiffness.

There are of course some downsides. The interior is a little dated, it’s expensive at £150,000, only comes in left-hand drive and isn’t the last word in technology. But, I love it. There are few cars made today that have this much soul and put such a stupid grin of everyone that drives the Jaguar XE SV Project 8. I have a suspicion there will never be anything quite like this made ever again, and for that I can only give it full marks.

Only a few are left from the limited run of 300 cars, so if you want one – hurry. If you’ve got one already, you have yourself one of the finest – and most practical – sports cars ever made.