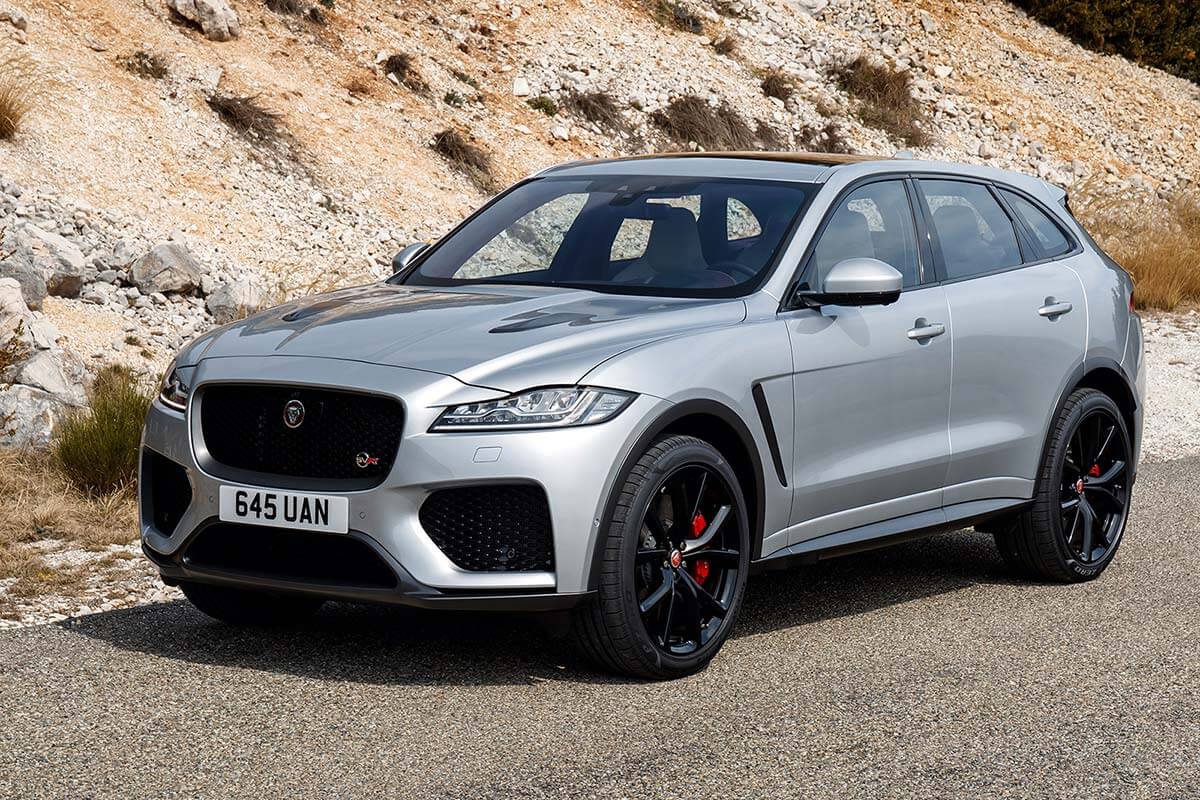 Jaguar are on somewhat of a roll at the moment. A continually tumbling average buyer age, something that started with the F-Type, has meant Jaguar team have been able to crack their knuckles and gleefully work on some truly special performance projects.

The younger, performance-hungry market has opened up to them again, once occupied by Jaguar with the XK120, E-Type and the Mark 2 from yesteryears. Even teenagers on car forums are getting excited about the latest car with a leaping cat on the grill. Jaguar’s slightly fuddy-duddy, ‘old man’ image has officially all but disappeared. 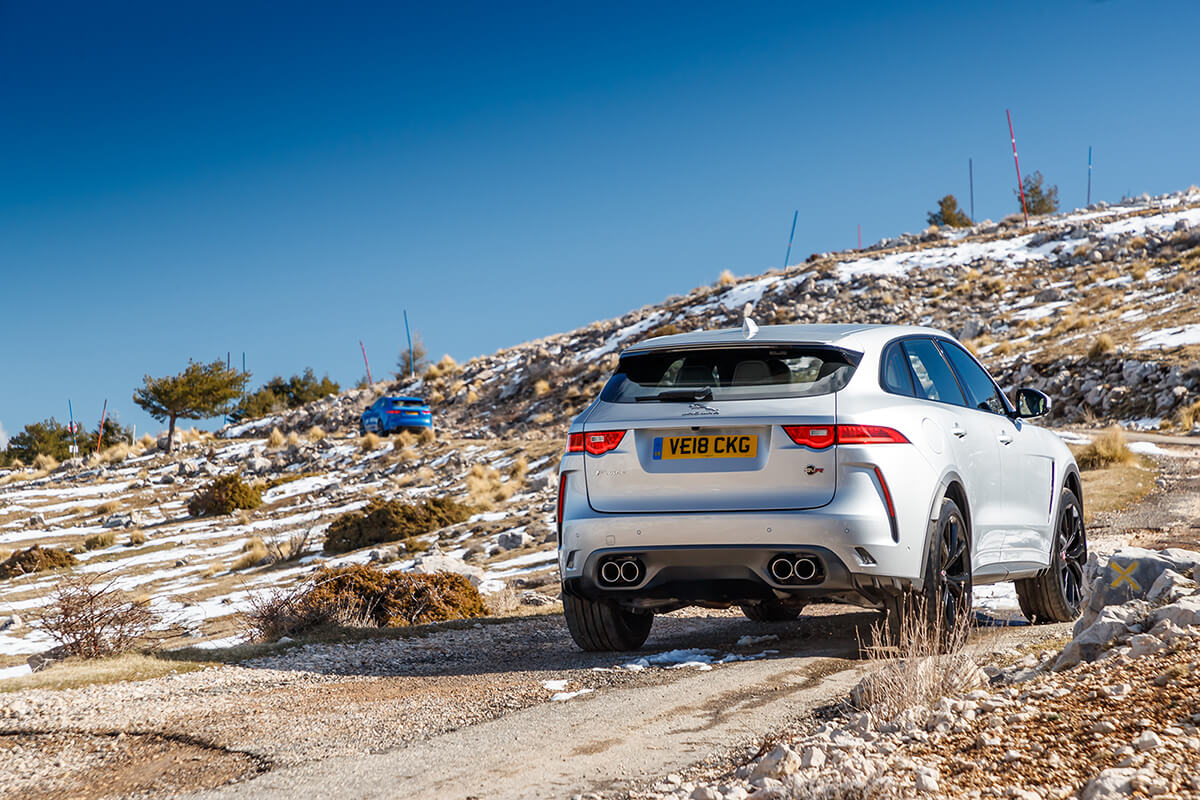 Talking about their performance cars – one relevant accolade here is of the Jaguar SV Project 8, a car that broke the Nurburgring lap record for a four-door car back in 2017.  The Project 8 put in a scarcely believably time of 7min 21.2sec, and the record still stands today. To put that into perspective, that’s faster than the latest mid-engined Ferrari, the 488GTB. Done in a car with space in the back for a fairly substantial IKEA trip.

That same ‘Special Vehicle’ SV team that worked their magic with the Project 8 have now got their hands on the F-Pace, Jaguar’s rather handsome SUV. They got the butter out and squeezed in their perennial 5 litre supercharged V8, giving the car 550PS and 680Nm of torque. That’s 542bhp 502lb ft in old money.

All that power sends the car to 60mph in 4.1 seconds, the same as Ferrari F430 (I know, another Ferrari comparison, but it conveniently fits) and on to a top speed of a fairly useful 176mph. 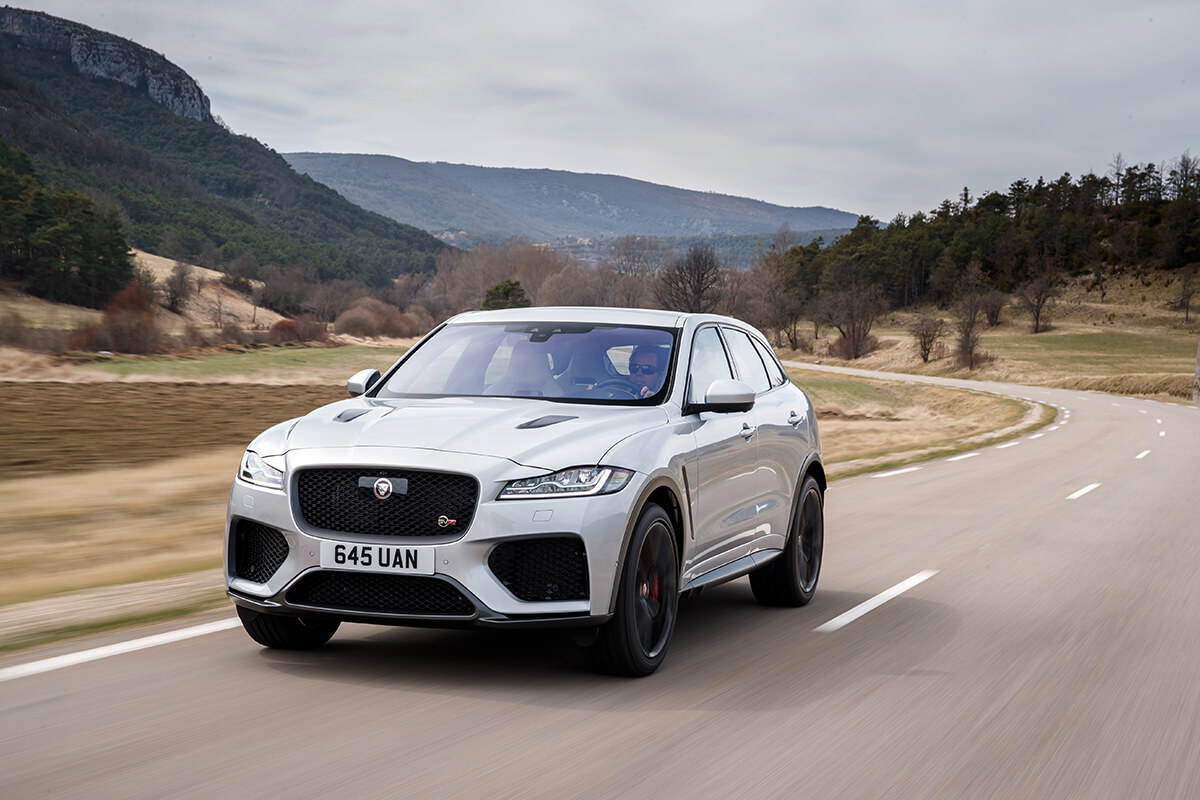 Jaguar sent me to the South of France to do the arduous task of testing their new creation. I know, I know. The things I do for our readers.

The South of France, specifically between Nice and St Tropez in this case, in addition to being a jet-set destination, offers some of the most spectacular driving roads in the world –  and a view to die for. This made it the ideal place to test the SVR to its full capabilities. It also incidentally tested the stomach of this journalist when presented with an unlimited supply of the local moules-frites.

Anyway, stepping out of the hotel. 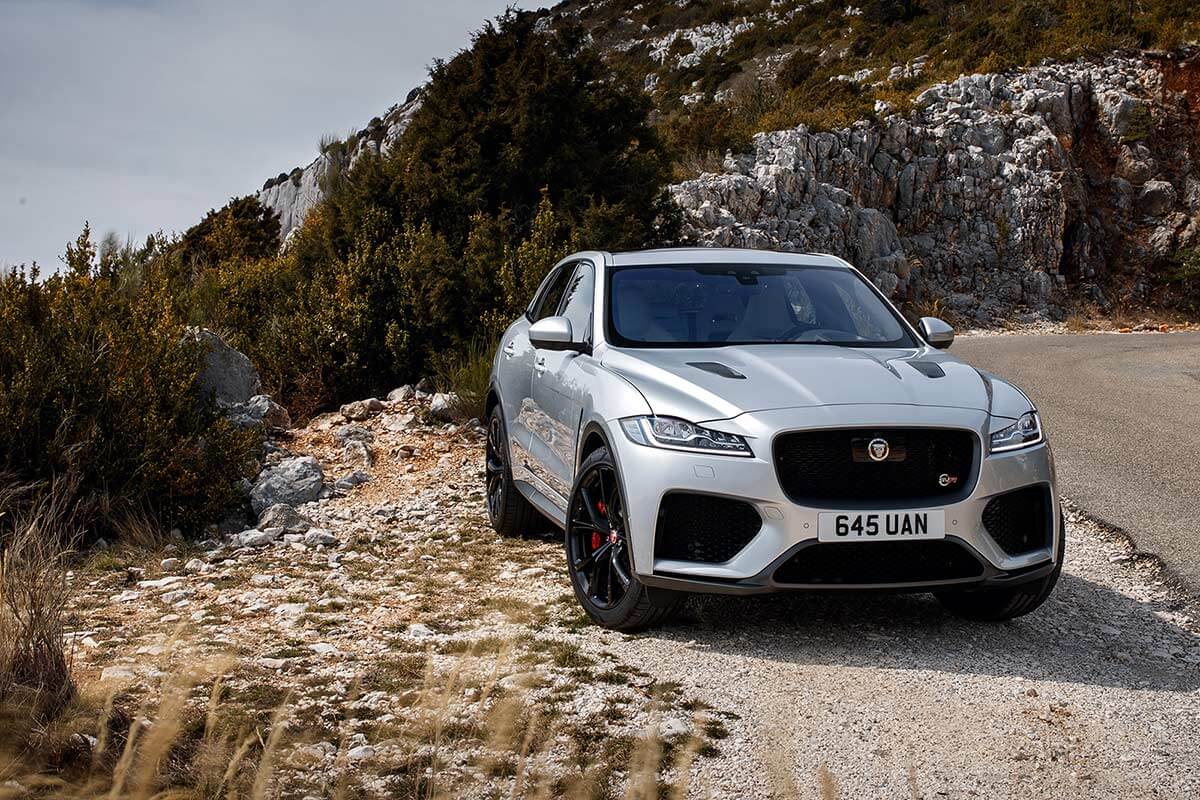 On the outside, it’s a handsome beast. Clearly recognisable over the standard F-Pace owing to the (functional) vents dotted around it, quad tailpipes , 21 inch alloys (22s are optional) and wide stance. No-one will think you’ve bought the diesel, this is a car that’s clearly got performance as its focus. Our car’s brightwork was a deep silver and it wears the colour well – it’s one of the few (new) cars that does, so kudos to the designer as that’s one of the key markers that you’ve made a good-looking car.

Heading inside, the interior, whilst not the most the absolute last word in luxury and tech, is still a very, very nice place to be. Quilted leather seats (with adjustable bolstering) and mood lighting will make you feel suitably special, and the driving position is excellent. The only slight annoyance is the window controls that are placed on the very top of the door card for some reason, inches from the wing mirror. As I don’t consider putting my windows up and down as one of my pastimes – this wasn’t a real issue living with the car. 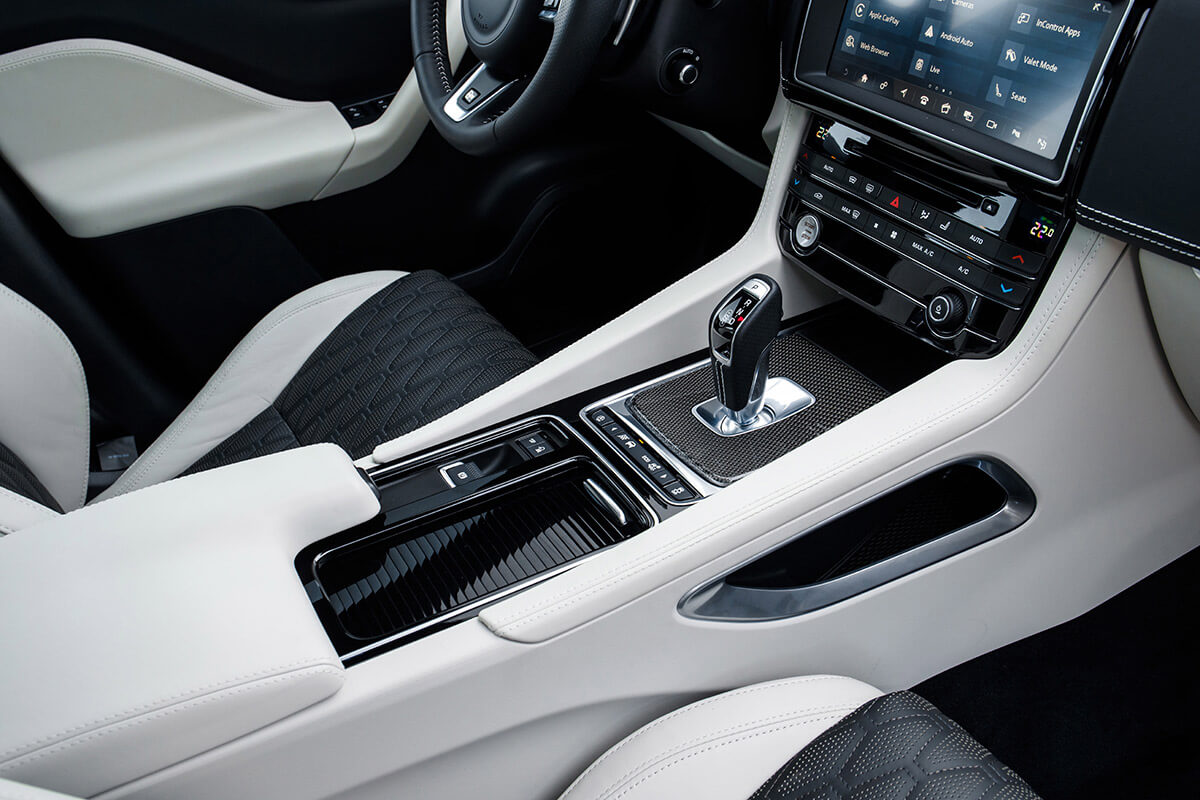 If I’m honest, I’m not here to sniff leather and test the firmness of interior plastics, I’m here to drive.

You press the starter button and you’re greeted with a gruff bellow from the exhausts before the sound settled into a typical V8 burble. A ‘quiet-start’ mode is available if you want to keep relations good with your neighbours. 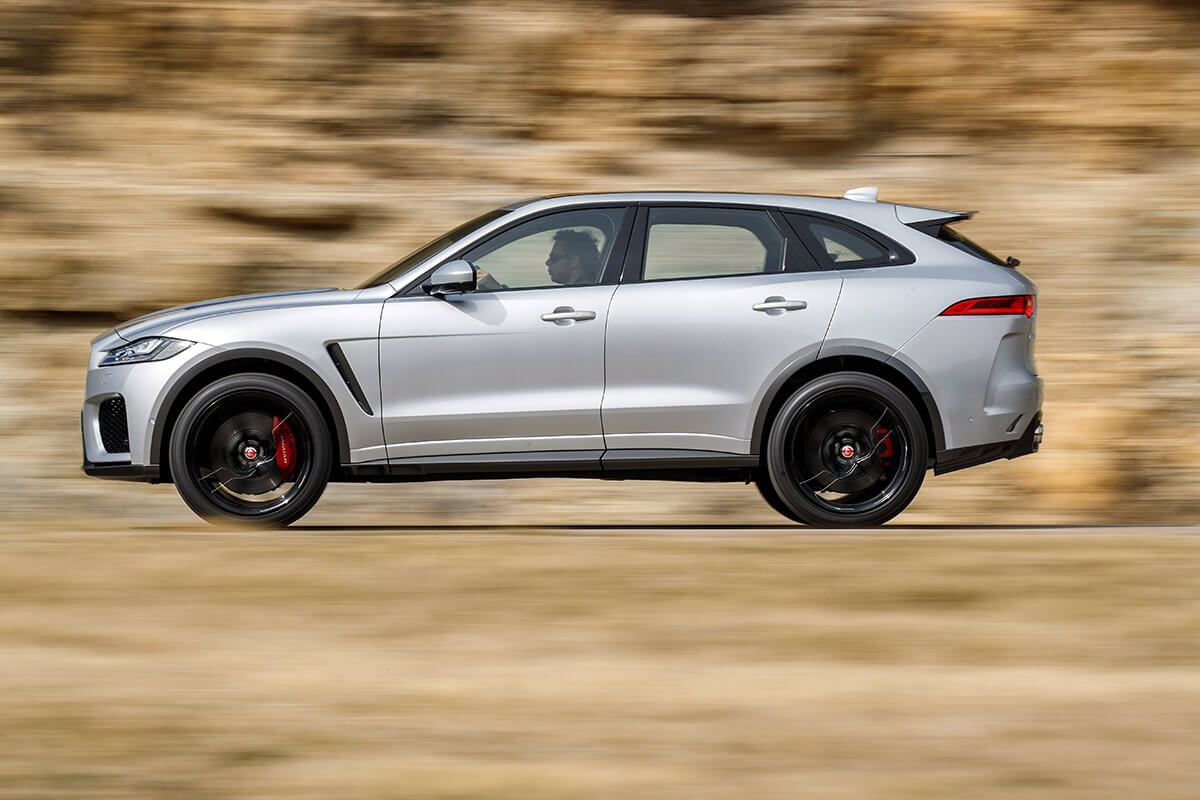 The acceleration is impressive. Like, really impressive. It doesn’t feel its weight and despite the large amount of power on tap, the acceleration is never jarring. It’s smooth and progressive, surging you towards the horizon with some vigour and some shock to whatever passenger is in the car at the time.

Getting high up into to mountains, stringing a set of fast swooping turns together and chasing David Gandy of all people (who has a racing license to go along with his irritatingly good looks), the F-Pace SVR remains composed through the bends. Even with the traction control off and progressing at somewhat naughty speeds, there is no hint of under or oversteer – just complete compliance and only the slightest bit of body lean and equal to, if not better than the competition. 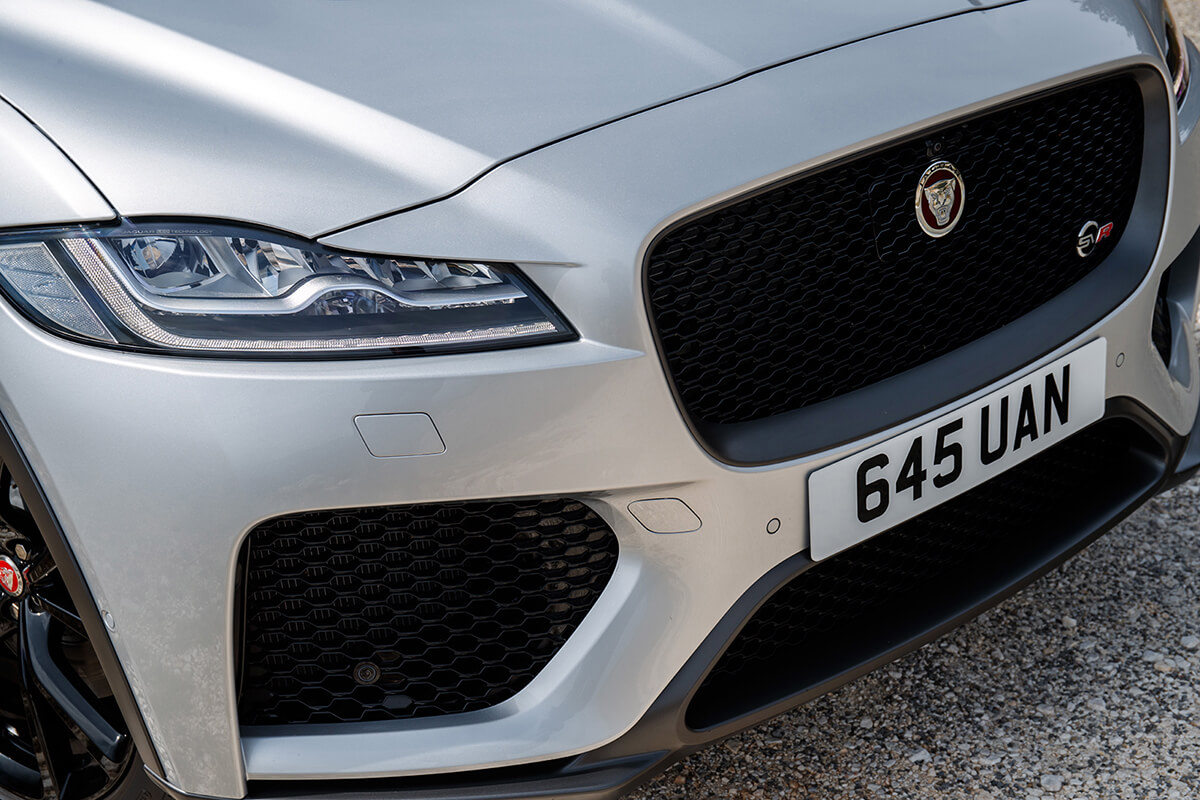 The 8-Speed ZF gearbox changes gear with urgency on the upshifts, especially under full throttle, and on the downshifts, whilst lacking a little crispness to the gear change, delivers the full Kellogg’s with crackles and pops on the overrun when decelerating.

The brakes are ‘only’ 4-pots at the front with floating callipers at the rear, but they’re big, beefy and consistently stopped the 4.7metre long, near 2-tonne car on some particularly tight (and occasionally hairy) French roads without issue. Lucky as some of the drops off the road were approaching 1000 feet. Erk.

This, incidentally, was after I spent an hour the previous evening arguing with the SV team (admittedly fuelled by some gin) saying the car needed six-pot callipers. I then spent the next day expecting to prove them wrong, and even under repeated and heavy braking I couldn’t get them to fade – you could realistically track this car, if you so desired. Impressive stuff for a car of this weight. 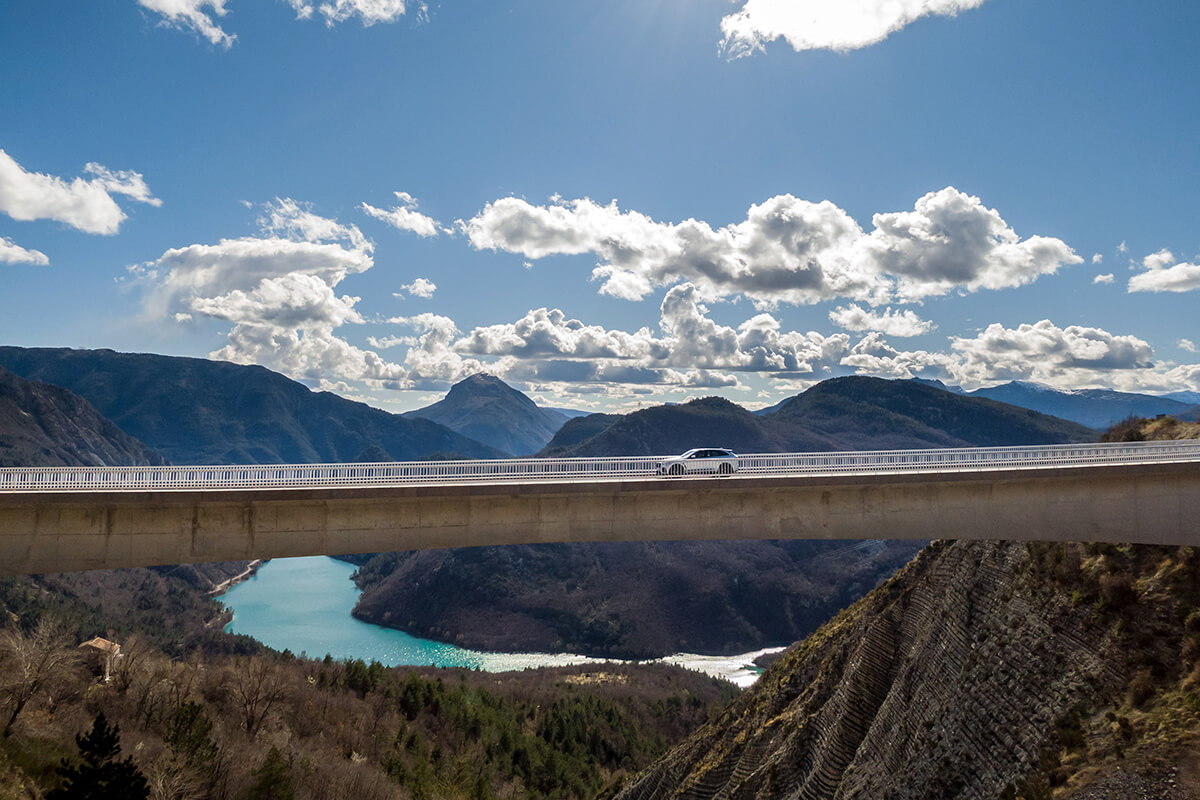 When you back off and want to drive like your hair isn’t on fire, the SVR is docile. Turn off the loud exhaust, put the car into ‘comfort’ mode, and the only thing that would let you know you’re in the SVR is the slightly stiffer suspension and the distant sounding soft V8 burble. It’s genuinely comfortable and the added performance has not dented its ability as a daily driver.

Driving through those roads, one thing hit me more than anything – I didn’t wish I was in a sports car, and that’s about as high a praise as you can bestow on a sports SUV.

Starting at £75,335, it’s a little more expensive that its closest rival, the Alfa Romeo Stelvio Quadrifoglio. The Alfa is slightly quicker to 60 but it lacks in the midrange compared with the Jaguar, and quite frankly, doesn’t look as good as the big cat. Most importantly, you just can’t beat a V8 for pure aural pleasure. I’d take the Jag.