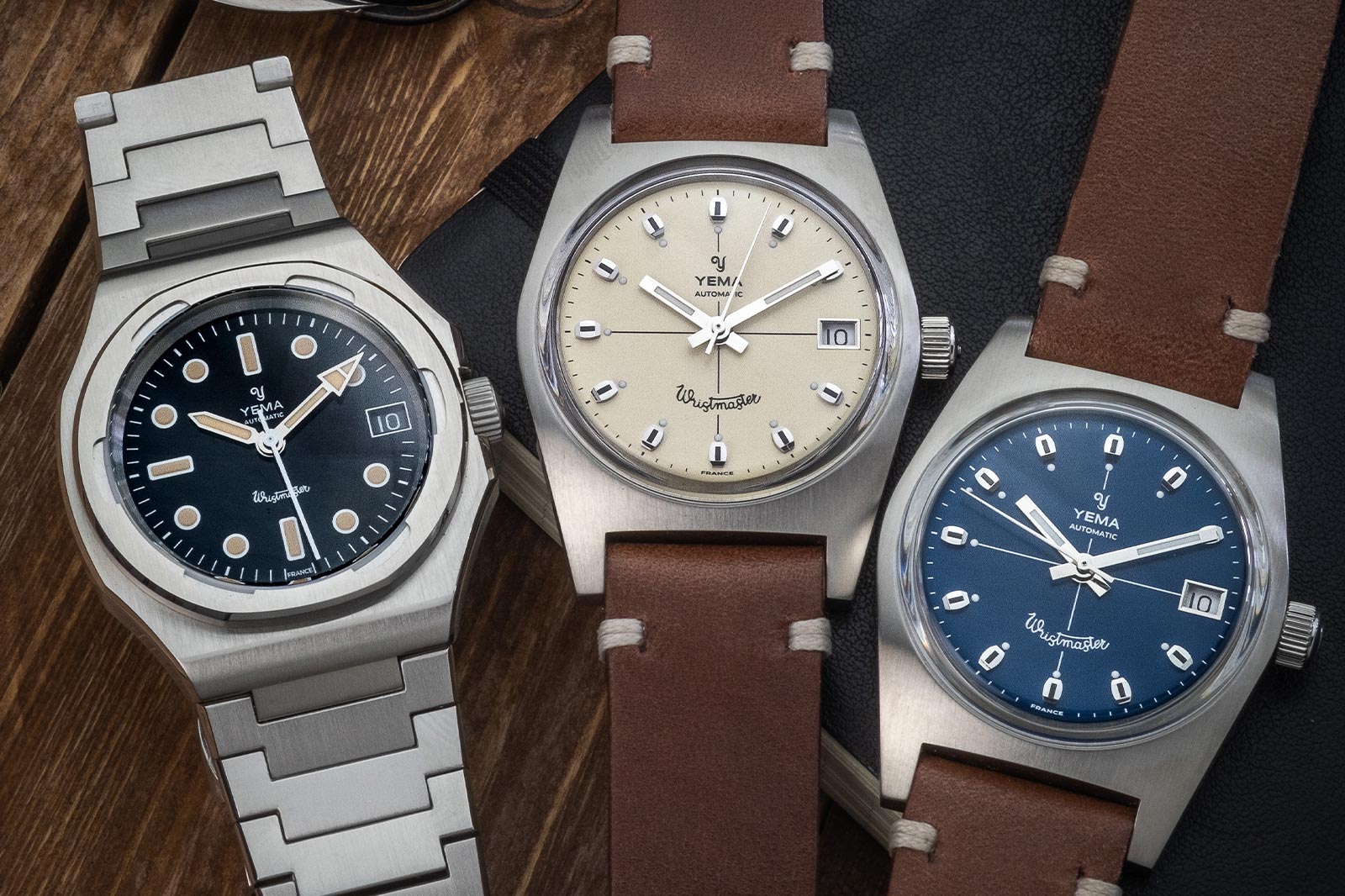 Yema have quietly been producing great French timepieces for many decades now, although they are currently undergoing a modern revival and renaissance. Watches like the Superman and the Navygraf have proven their quality time and time again, especially earlier this year with the release of the Navygraf Marine Nationale GMT Limited Edition. And now Yema are taking a look back at their history with a pair of new dress watches, the Wristmaster Adventurer and Wristmaster Traveller.

While they might not be have the same vintage chops as a reissue or an update to an actual historical reference, both watches have been created with vintage inspiration in mind. They make for a lovely duo with the classy Adventurer complimenting the squatter, more robust appearing Traveller. 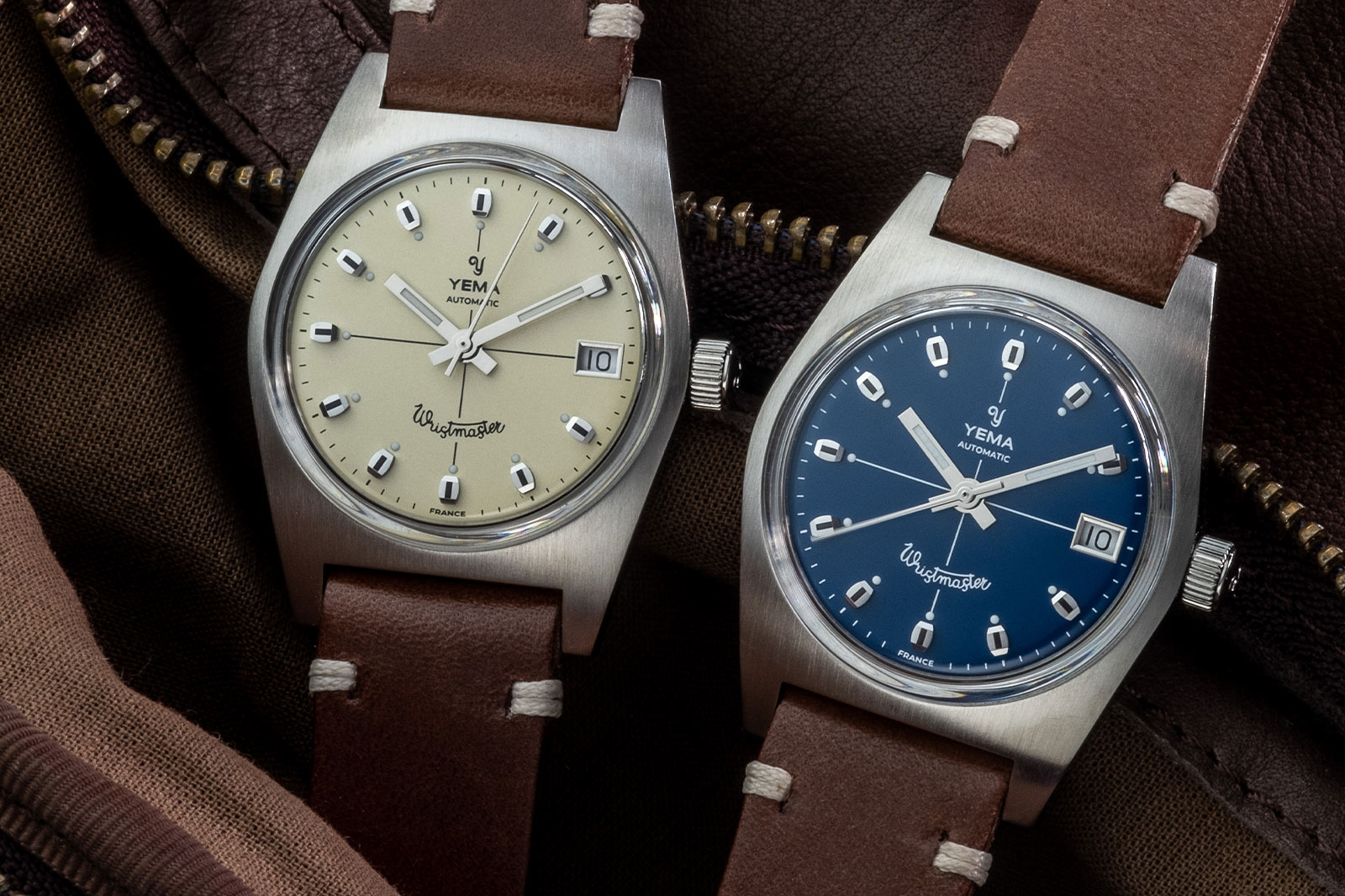 The stainless steel case measures a very retro 37mm in diameter, a size taken from the original Wristmaster of the 1960s. However, its slim proportions are balanced out by a 48mm lug to lug length, which is the same as a much larger watch, meaning it still sits on the wrist like a modern piece. The case itself is simple with a large, brushed surface that’s only interrupted by the polished bezel. It emphasises the classical inspiration and simplicity of its dress watch status – which is what Yema describe it as. 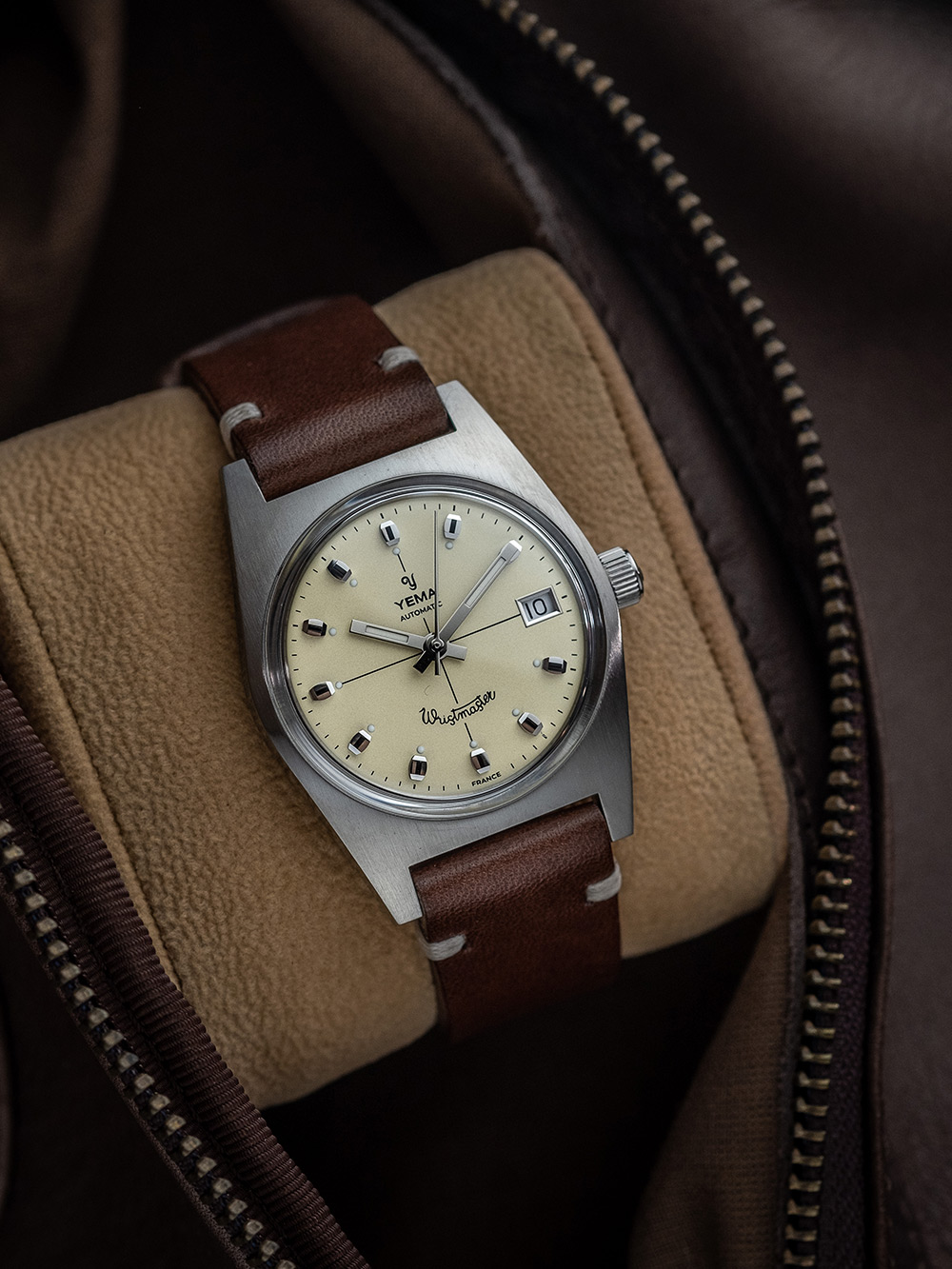 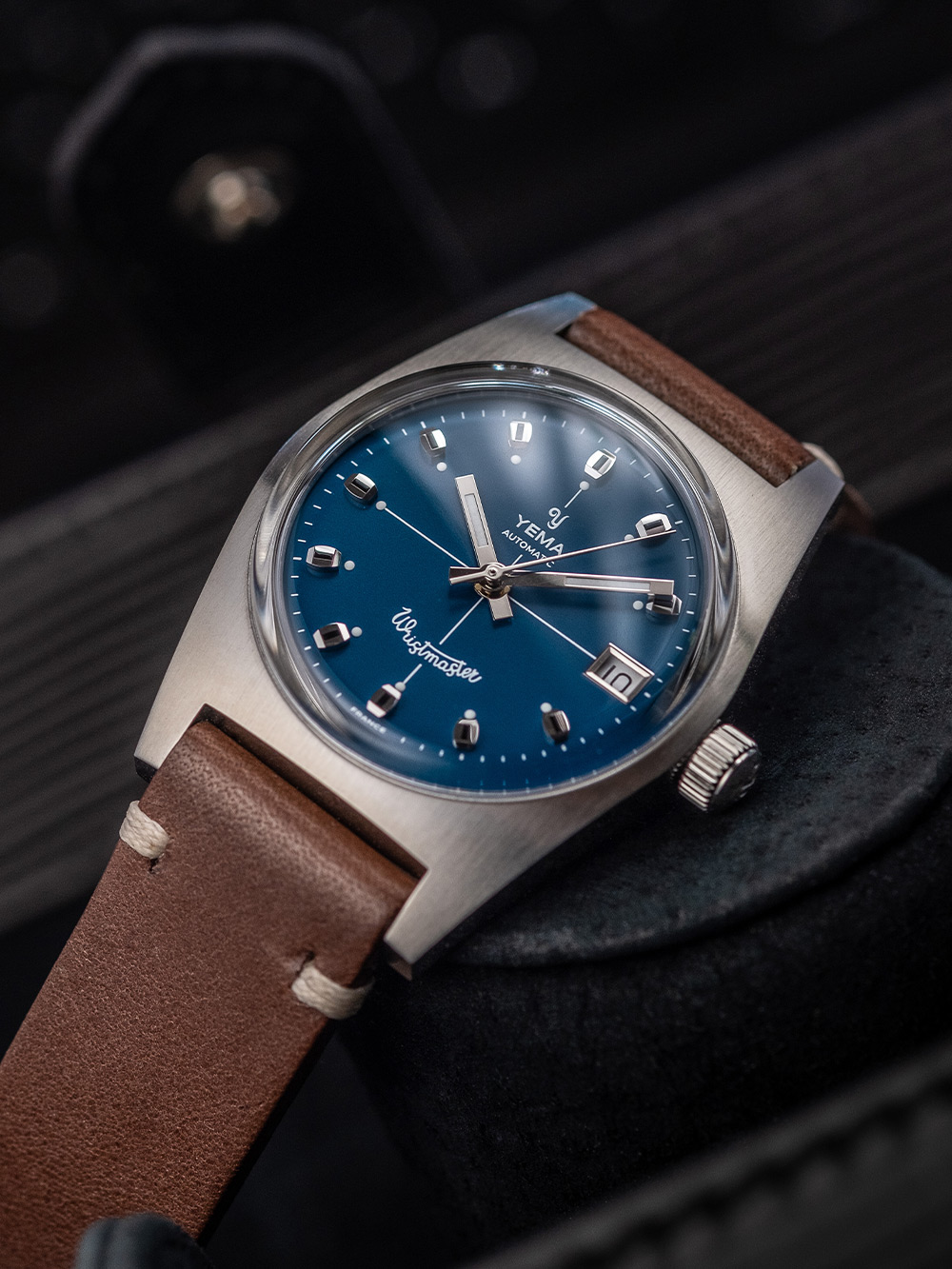 Similarly, the dial itself is also simple. A crosshair pattern sits between the raised, silver indices and a date window occupies the 3 o’clock position. It’s reminiscent of the Longines Heritage Classic, which rocks a sector dial. As for colour, there are two options: blue or beige. The beige really brings home the neo-vintage vibe but for my money the blue is where it’s at, something about it makes the whole composition pop. Then, for legibility, there is plenty of lume on the hands and hour markers. 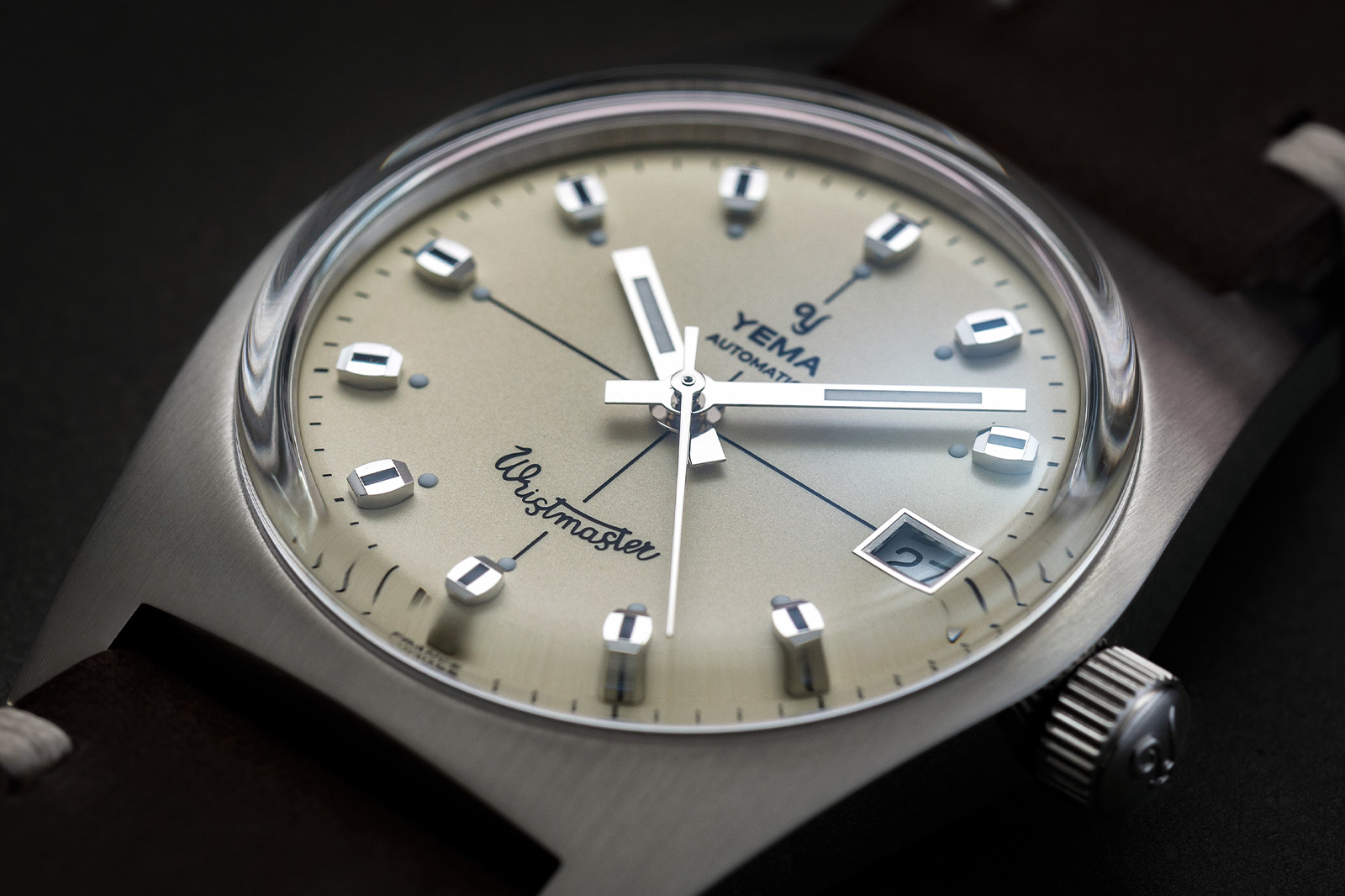 While the design of the Wristmaster Adventurer might draw on vintage elements, the movement inside is entirely modern Yema. It’s the in-house Yema 2000, an automatic calibre with a 42-hour power reserve and +/- 10 seconds variance per day. It might not be a Swiss calibre but it performs just as well, if not better, than Sellita and ETA equivalents. And hey, France is only next door. 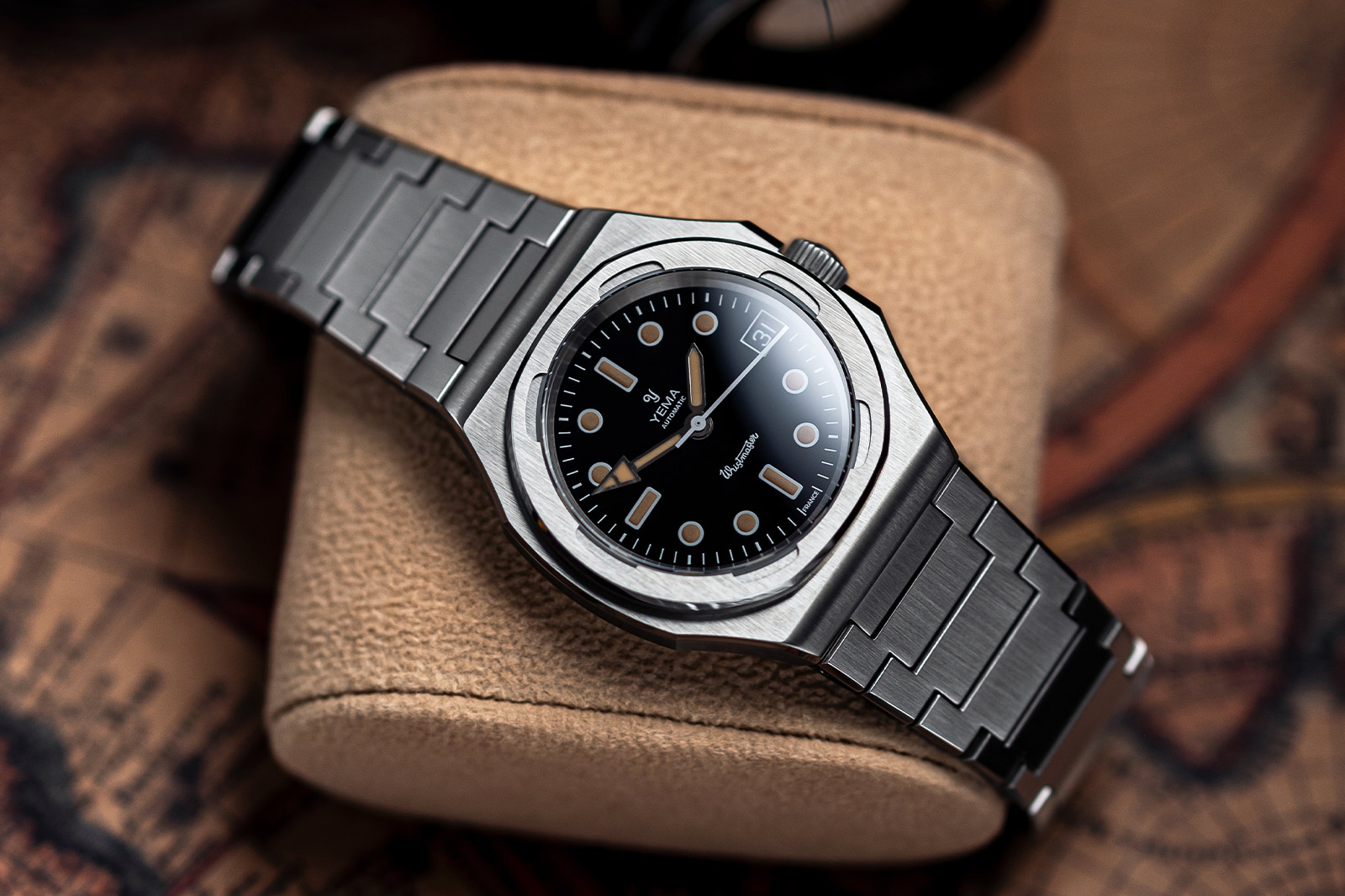 The second watch in the Wristmaster collection is the Traveller. With an octagonal case, the sports luxe inspiration is apparent for all to see, inspired by watches from the 60s and 80s. It’s a touch wider than the Adventurer with a diameter of 39mm but that’s balanced by a shorter overall lug-to-lug. It lends itself more to a traditional tool watch and daily beater vibe. 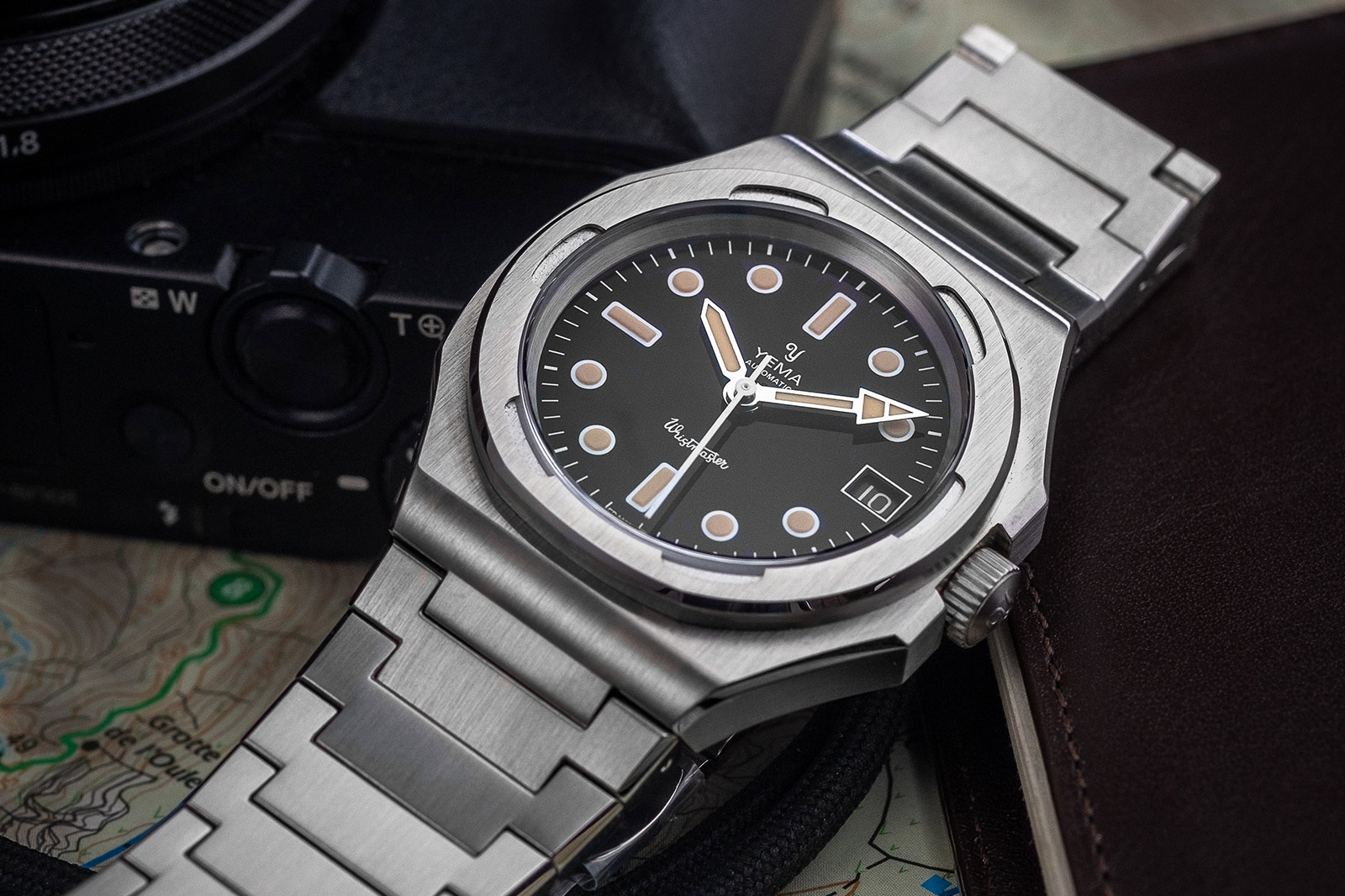 Its dial is glossy black with oversize hour markers that make it super legible. Although for a watch called the traveller, it is slightly odd that there’s no additional GMT hand or dual time zone, the iconic traveller’s functions (especially as they have an in-house GMT movement – the YEMA 3000).

Instead Yema have given it time and date functions only, courtesy of the YEMA 2000 movement again. I suppose they intend it for more ground level adventurers instead of jet setting. 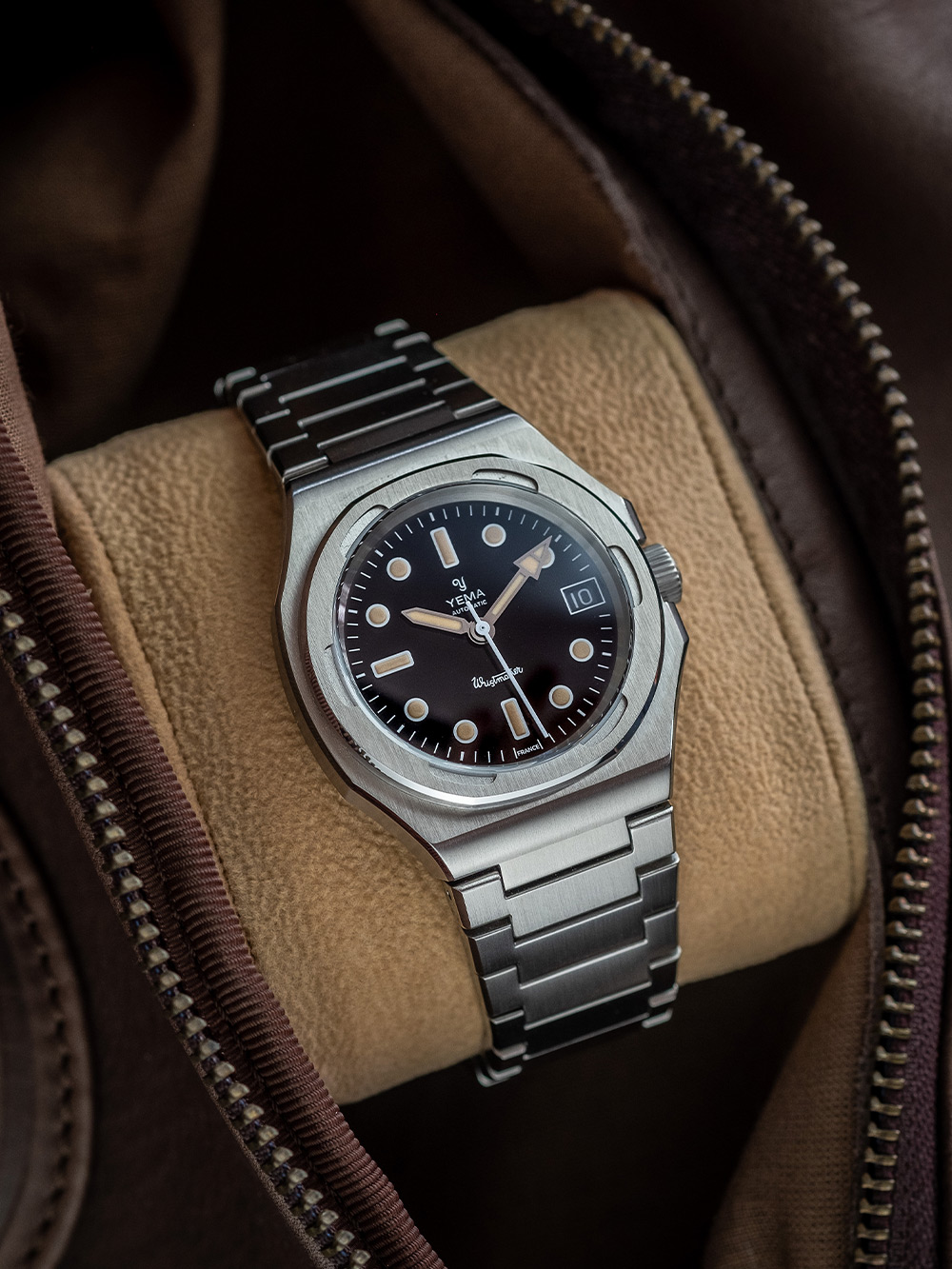 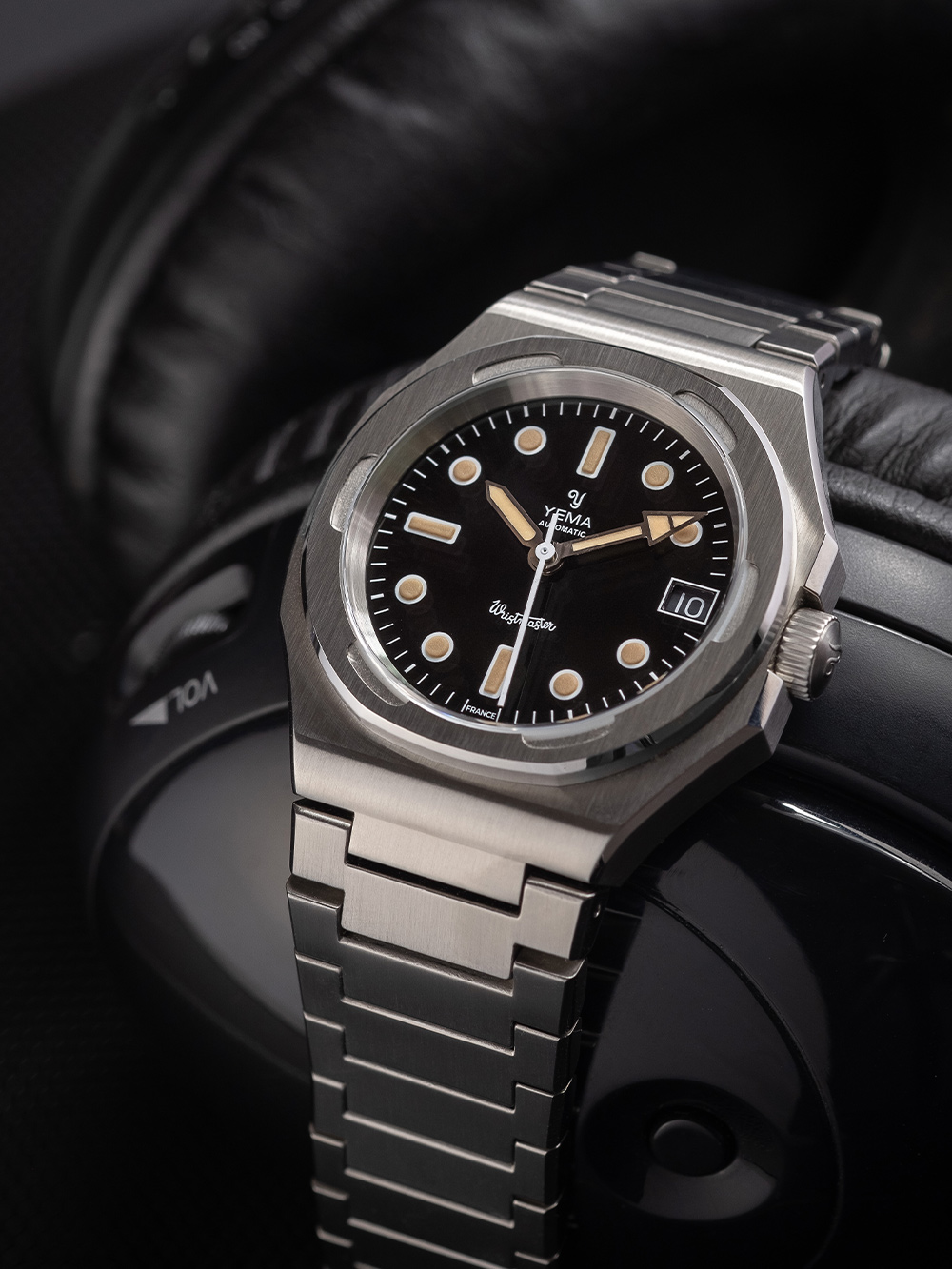 Both watches are being made available through Kickstarter, the popular crowdfunding service. That’s par for the course for Yema, even though the watchmaker has been around since 1948. Kickstarter is generally a platform where you find microbrands and new watchmakers but Yema have shown a mastery over the platform over the years and are one of its biggest horological successes. Through crowdfunding these vintage inspired watches, Yema plans to work towards new innovations faster by funding the expansion of their workshops in Morteau.

All that’s left to say is that the Kickstarter will take place from November 15-30, during which time the Wristmaster Adventurer will cost €399 (approx. £340) and the Traveller €499 (approx. £420). Following the campaign, both prices will go up by roughly €200, so they’ll still be well within the realms of accessibility. If your tastes lean towards the classical the Adventurer is a lovely dress watch for that price with bucket loads of vintage charm, why wouldn’t you? And likewise for the Traveller’s sports luxe flair.

More details at Yema and Kickstarter.