One of the first lessons that we learn as a kid is that crime doesn’t pay. Well, apparently that’s not entirely true. Sure, most of the best on-screen villains, be they in blockbuster films or great TV drama, meet a sticky end. But as far as their watch game goes, many of them are on point.

It’s hard to hate the late great Alan Rickman for example as Die Hard’s Hans Gruber, not only because the actor is magnificent but because he’s a seriously suave antagonist. The same goes for Pacino’s various gangster turns and even the impeccably-dressed psychiatrist that just so happens to eat his patients. We’re not saying we want to be like them, but if it comes with their watch collections it can’t be all bad.

Here then are the top 10 watches worn by on-screen villains. Good guys need not apply. 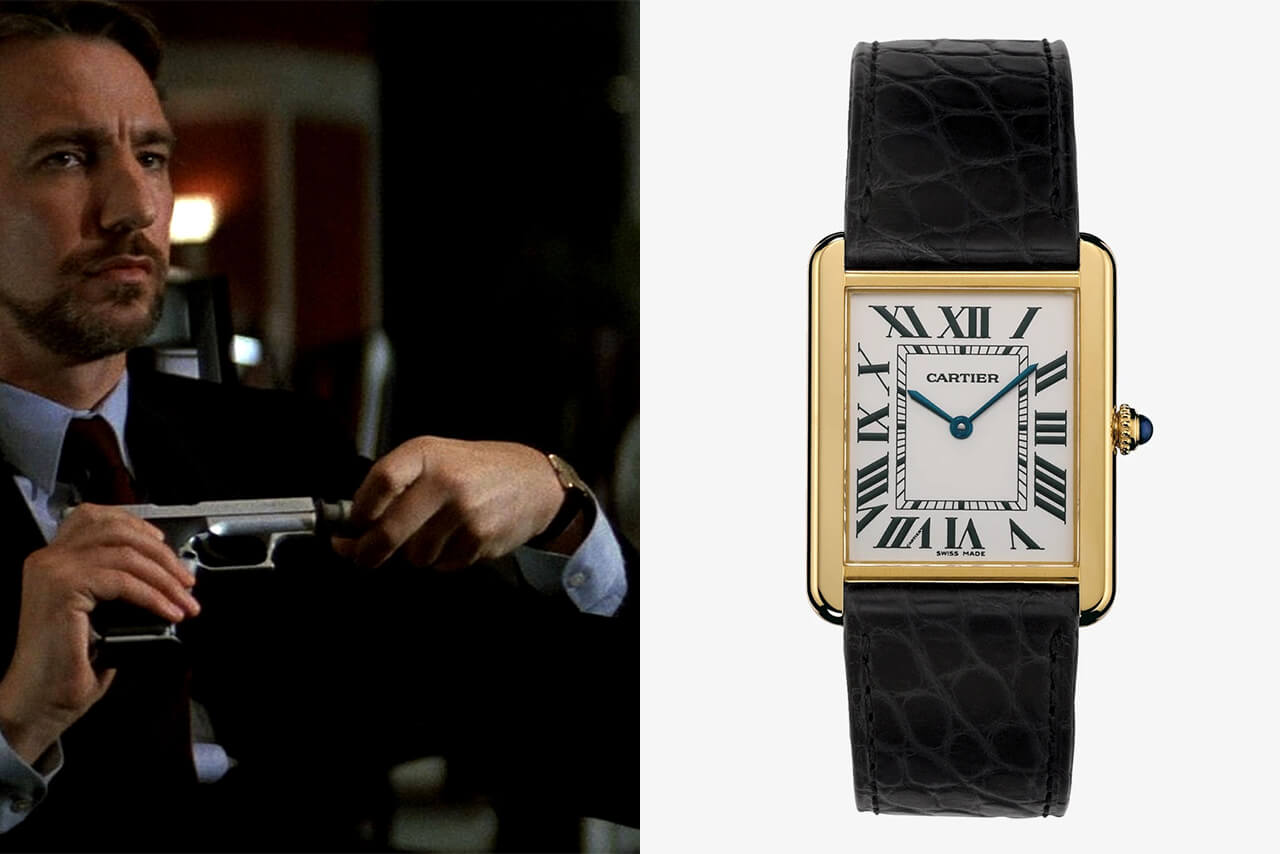 Let’s start with a Christmas classic and the well-spoken architect of the Nakatomi Plaza takeover, Hans Gruber. Sure he may have just been a bank robber masquerading as a terrorist, be he was one of the most refined villains of the era, and not just because he was played by Alan Rickman. On his wrist was a sleek, elegant, gold Cartier Tank, or something very similar, and something that sets him apart from his TAG Heuer-wearing cohorts. 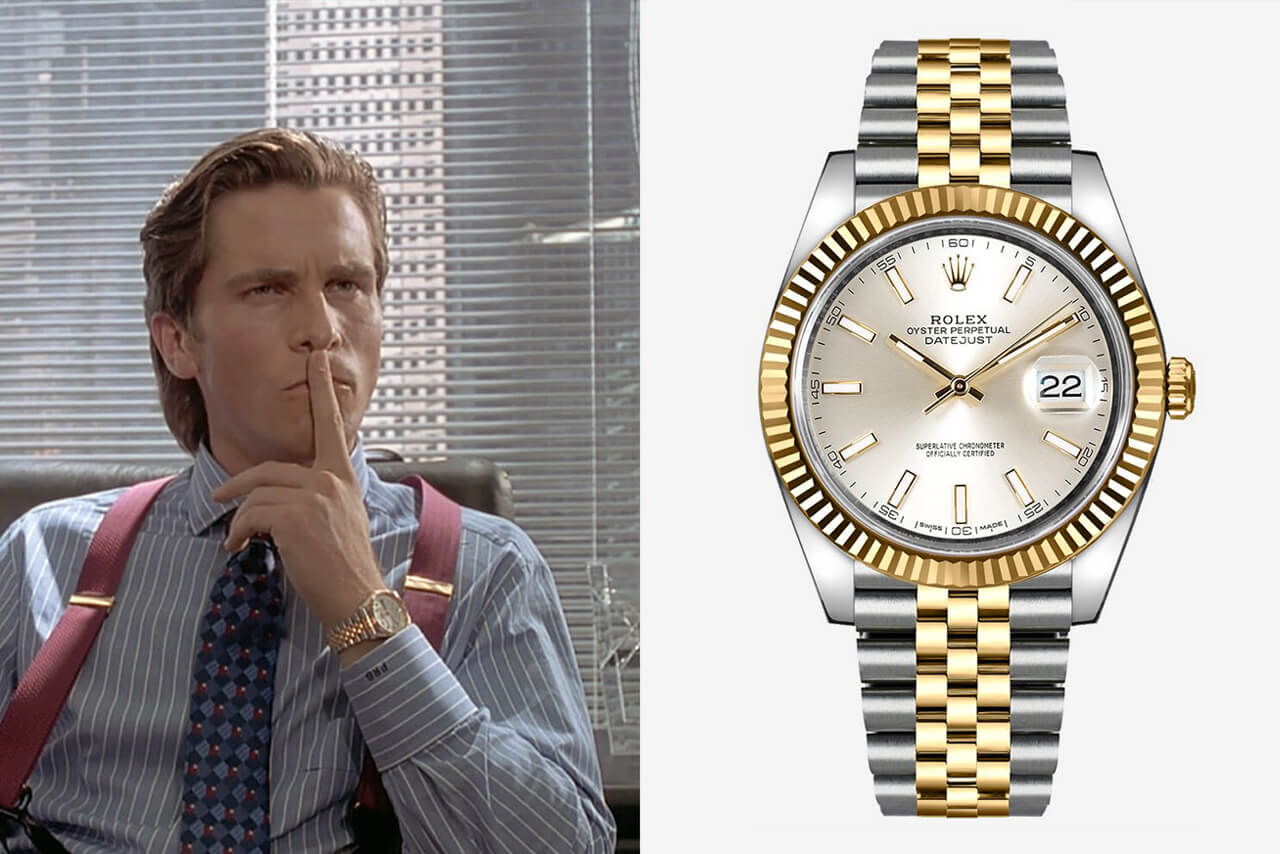 What does a 1980s yuppie with a penchant for ‘murders and executions’ and dangerous obsession with business cards opt for? A Rolex of course, probably bought with his first bonus. The Rolex in question is a Rolex Datejust Ref 16013. We don’t just know this from the film; the book mentions it 26 times. The two-tone colouring and champagne dial make a watch fit for the perpetually-stylish serial killer. Just don’t have a nicer watch than him. 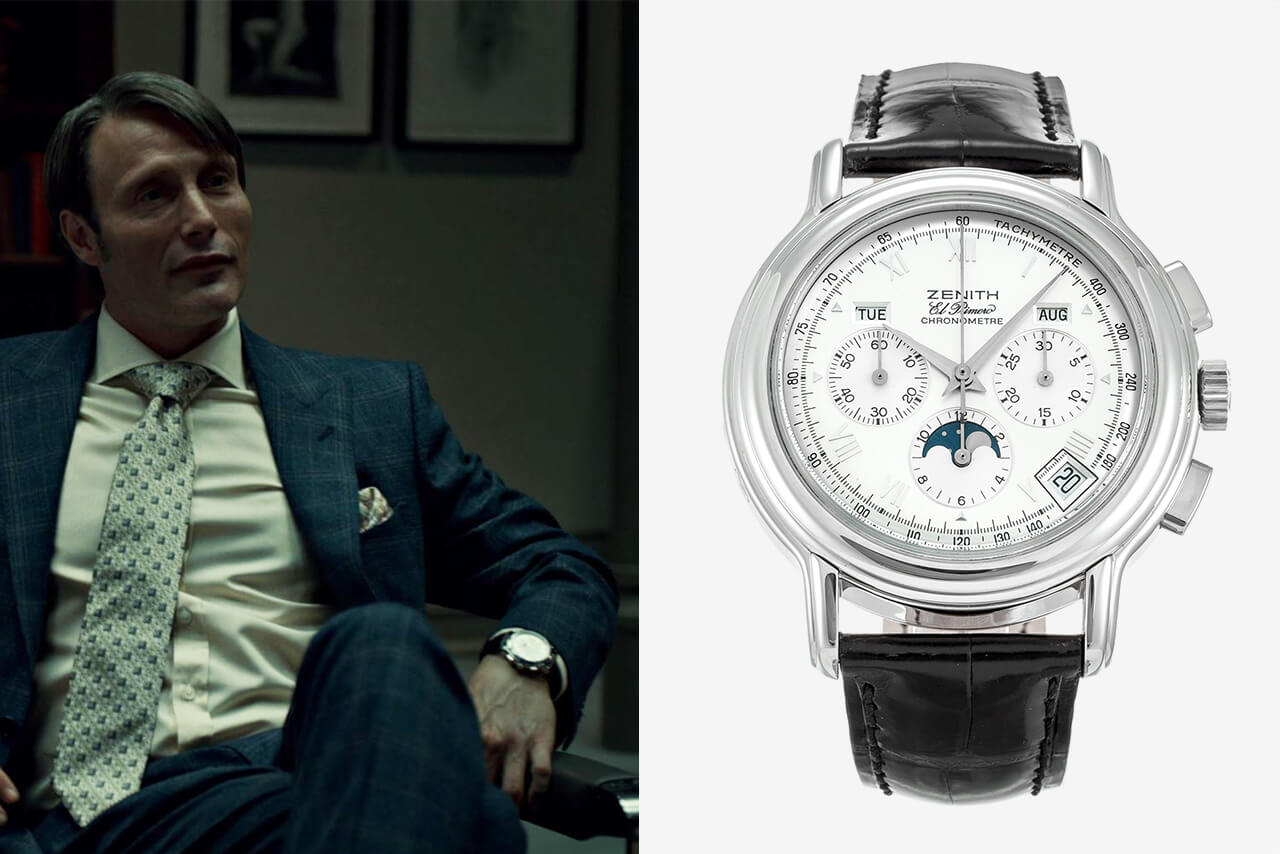 The TV adaptation of the Hannibal novels was dark, disturbing and, thanks to Mads Mikkelsen’s star turn, impossible to take your eyes off. Along with a wardrobe full of pocket squares and a larder full of body parts, his take on the cannibal doctor opted for what looks like a lovely Patek number. It’s actually, however, a Zenith El Primero chronograph. Does this reflect the villain’s dual nature, an elegant façade hiding something more predatory underneath? Probably not. Nice watch though. 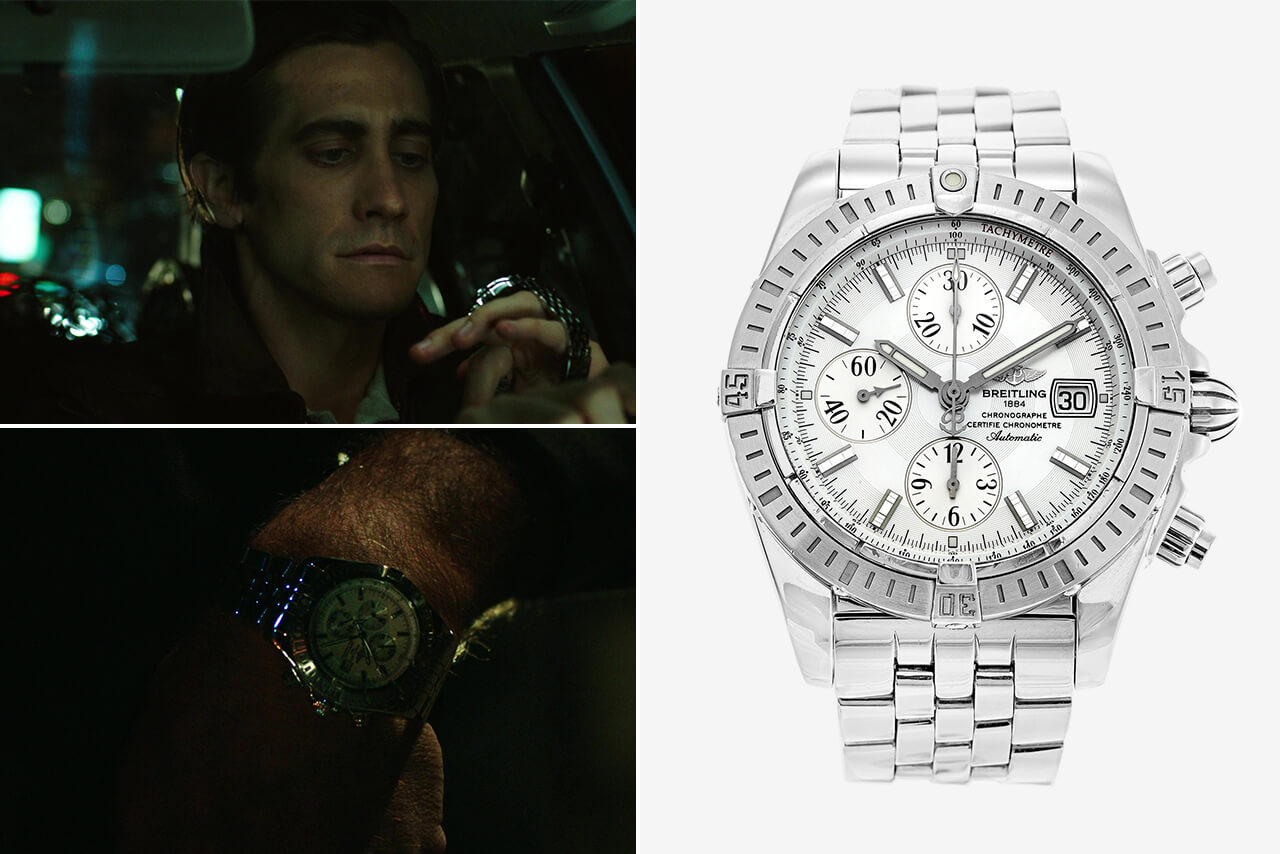 Possibly the only film Jake Gyllenhaal isn’t charming in, his crazed, sociopathic murder scene photographer is a whirlwind of compromised ethics and dubious morals. Still, there’s no denying he’s good at what he does and one of the first things he buys with his new-found wealth is a Breitling Chronomat A13356. Sure, it looks too big on him, but it still proves you can achieve anything you put your mind to. Even if you shouldn’t. 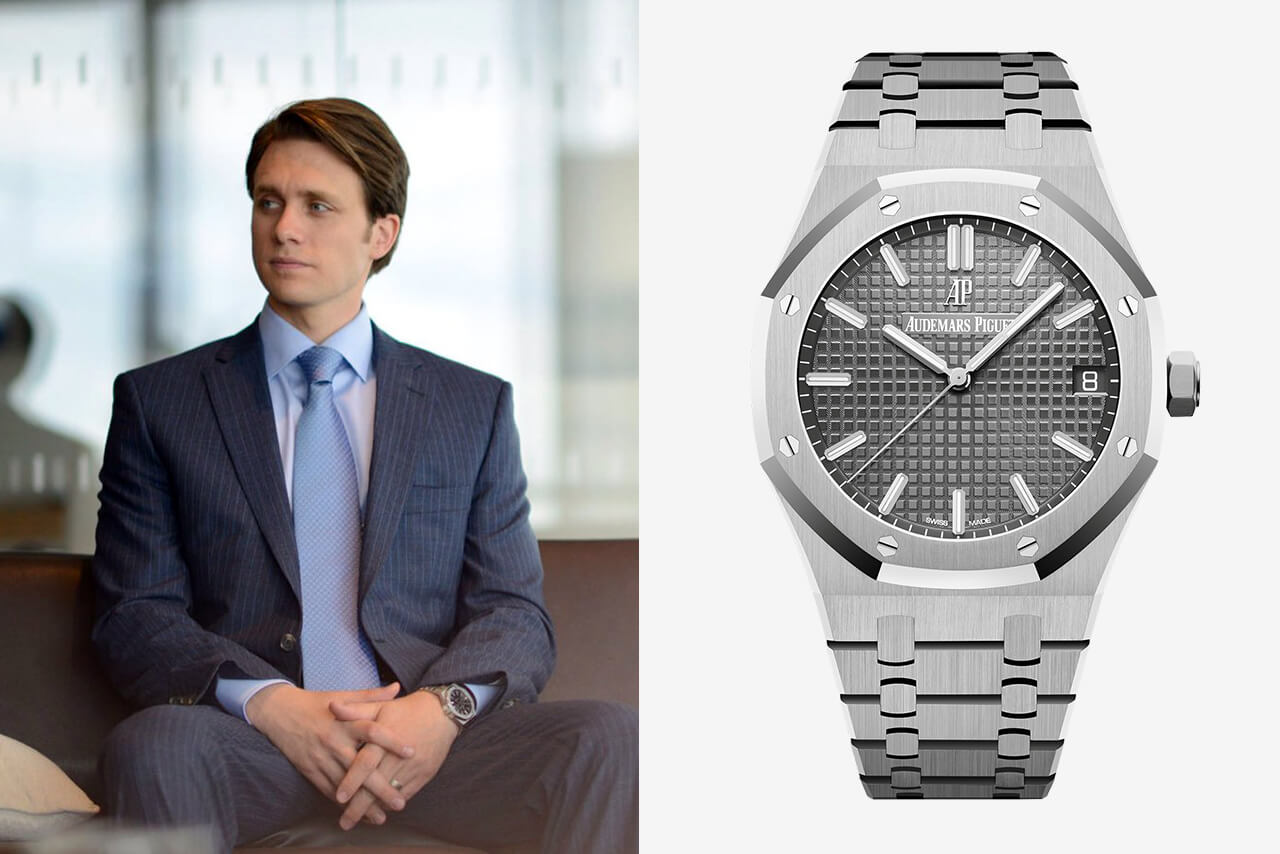 “Is that a Vacheron?” “Patek Philippe Tourbillon.” A sly bit of wrist-based discourse between Martin Wallström’s Tyrell Wellick and boss Scott Knowles is one for the watch nerds, especially when contrasted with what Wellick himself is wearing: a bigger, bolder and far more modern Audemars Piguet Royal Oak. For a guy that sees himself as a disruptive force against the old guard of mainstream finance, it’s a solid choice. 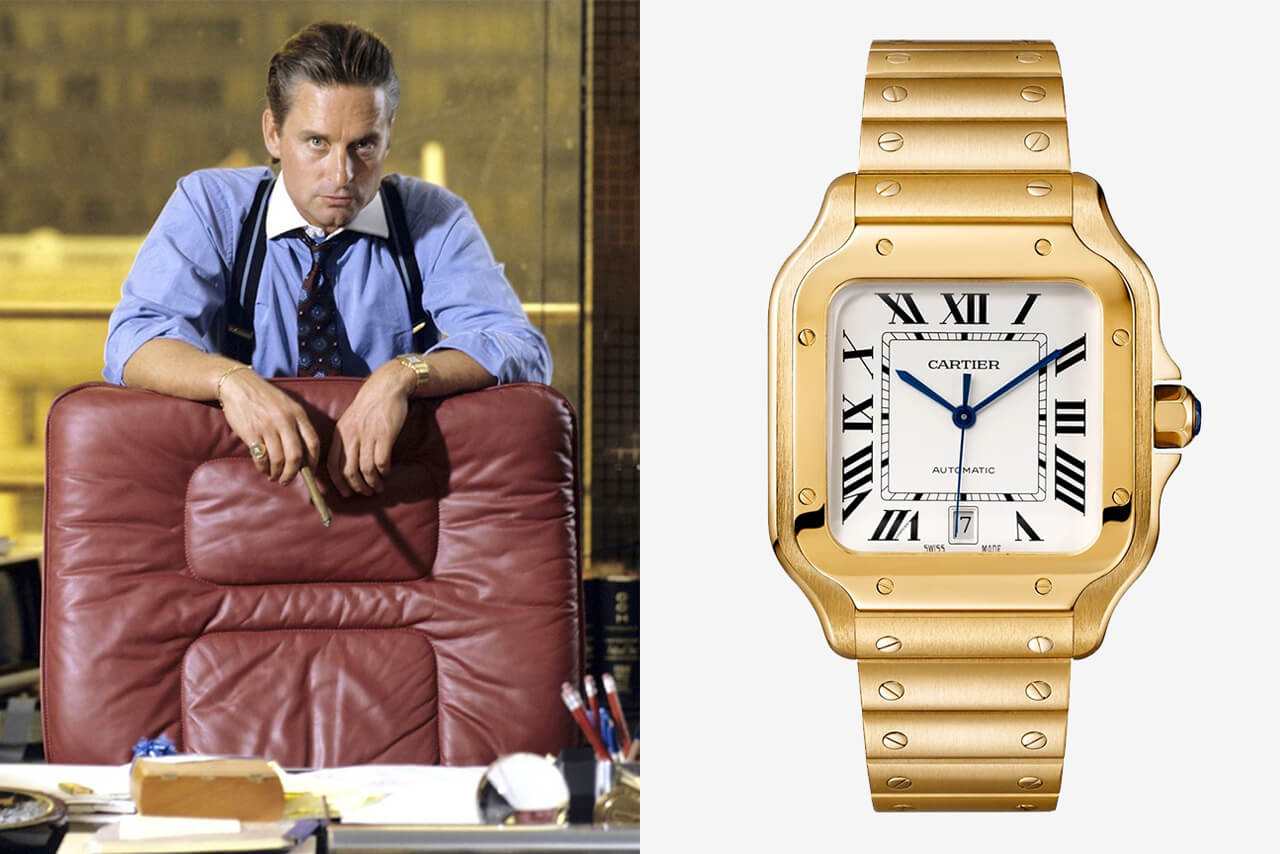 Speaking of the financial old guard, nobody represents the worst of the Wall Street ethos like Gordon Gecko – and nothing represents his own “greed is good” outlook like his solid gold Cartier Santos. The luxurious take on the original pilots’ watch is on show in pretty much every scene Michael Douglas dominates (i.e. all of them) and with his contrast collar shirt defines the corporate raider’s look. It’s not the Rolex you might expect (see Patrick Bateman, above), but for someone like Gecko, standing out is all part of the deal. 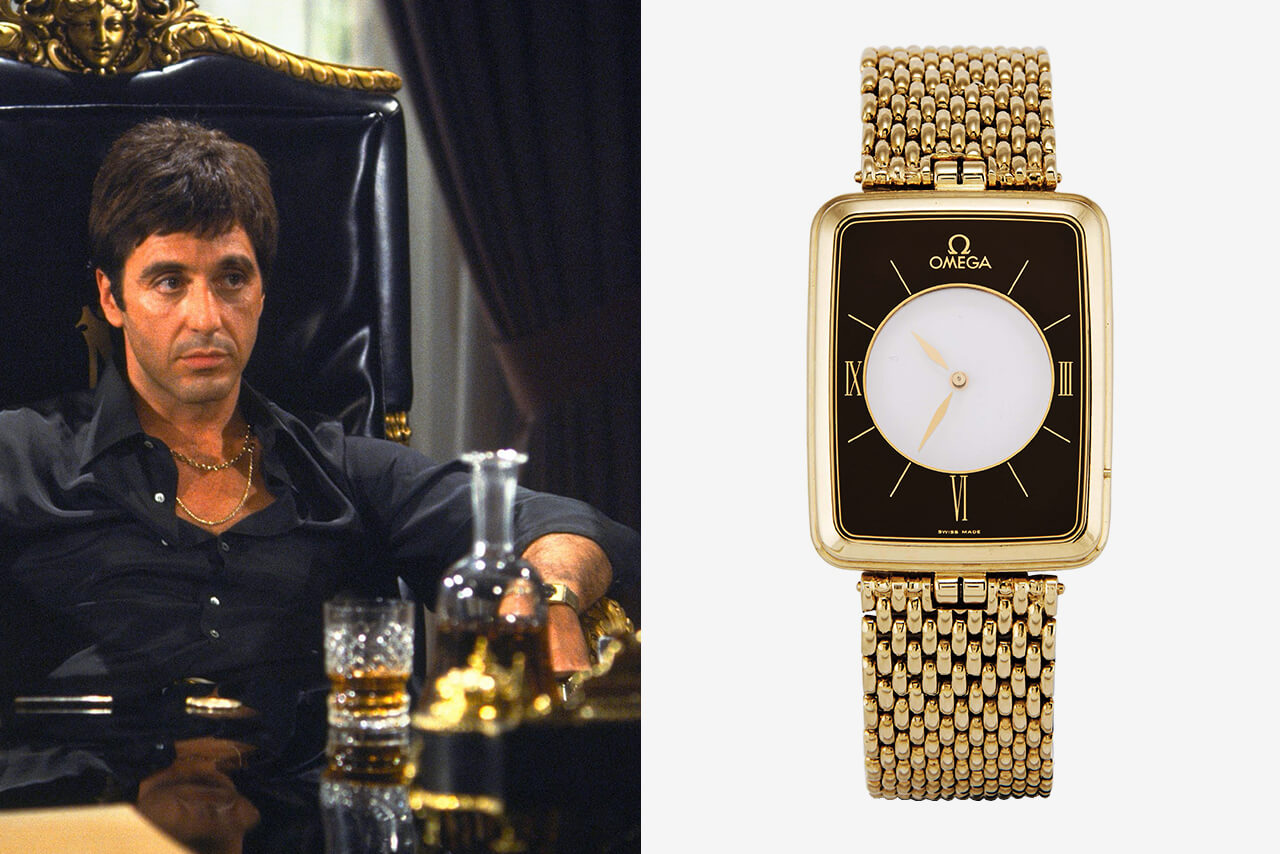 From immigrant in search of the American dream to international drug lord, Al Pacino’s star-making turn as Tony Montana is still one of the most intense, awe-inspiring performances on screen. The problem is, Montana wears his criminal wealth on his sleeve and aside from piles of cocaine lying about his mansion he dresses like a newly-minted criminal, with flamboyant shirts and a very snazzy watch: the rare Omega La Magique. Only 261 of the ultra-thin rectangular watch were built. Not exactly a subtle choice for the Cuban kingpin. 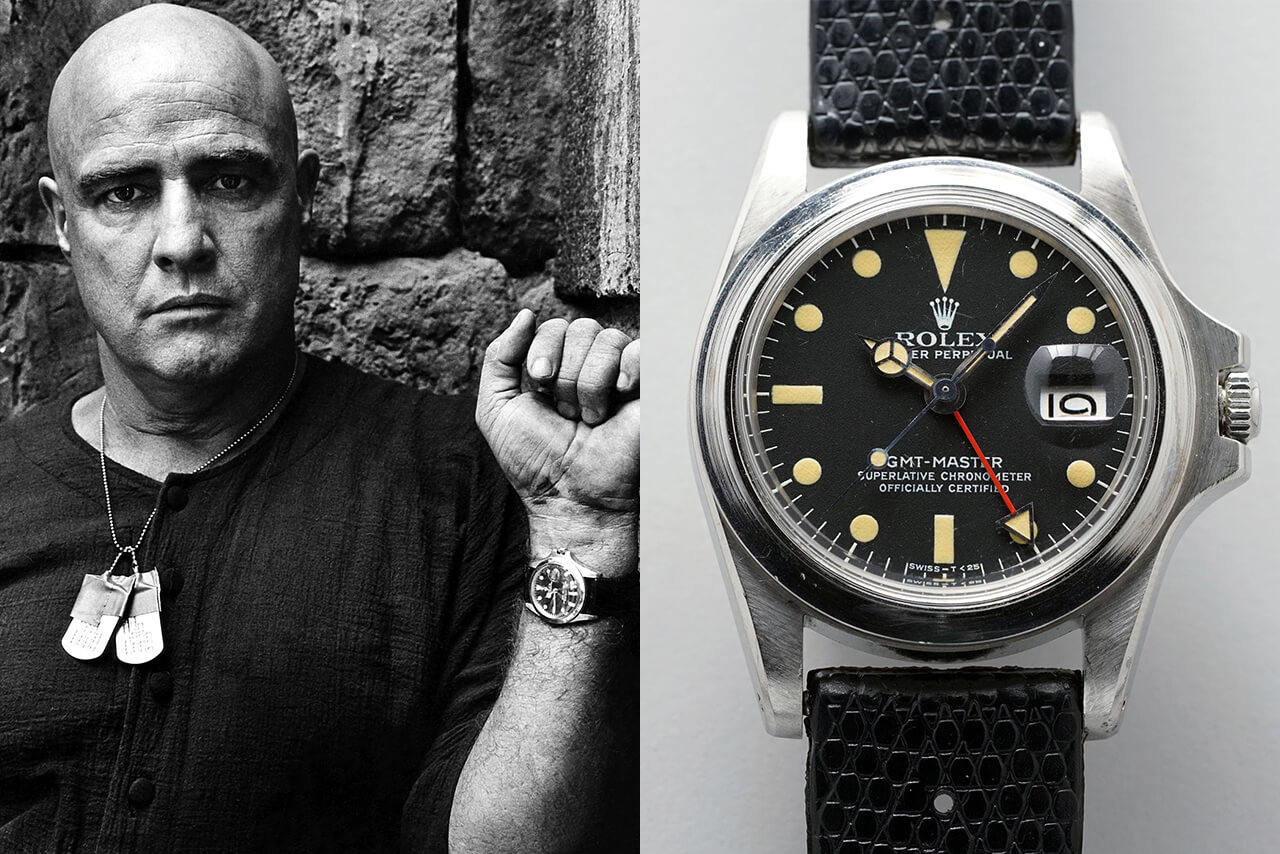 We recently got hands-on with the most famous of Apocalypse Now’s iconic timepieces, the Seiko Willard (see our review here) worn by the film’s protagonist. Despite only appearing at the very end however, it’s Marlon Brando that steals the film with the ‘gone native’ Kurtz. It’s no surprise then that the fallen Colonel’s watch is just as famous: the Rolex GMT-Master. With its military colouring and rounded crown guards, its precisely the kind of watch you’d expect a high-ranking American officer to wear, off the deep end or no. 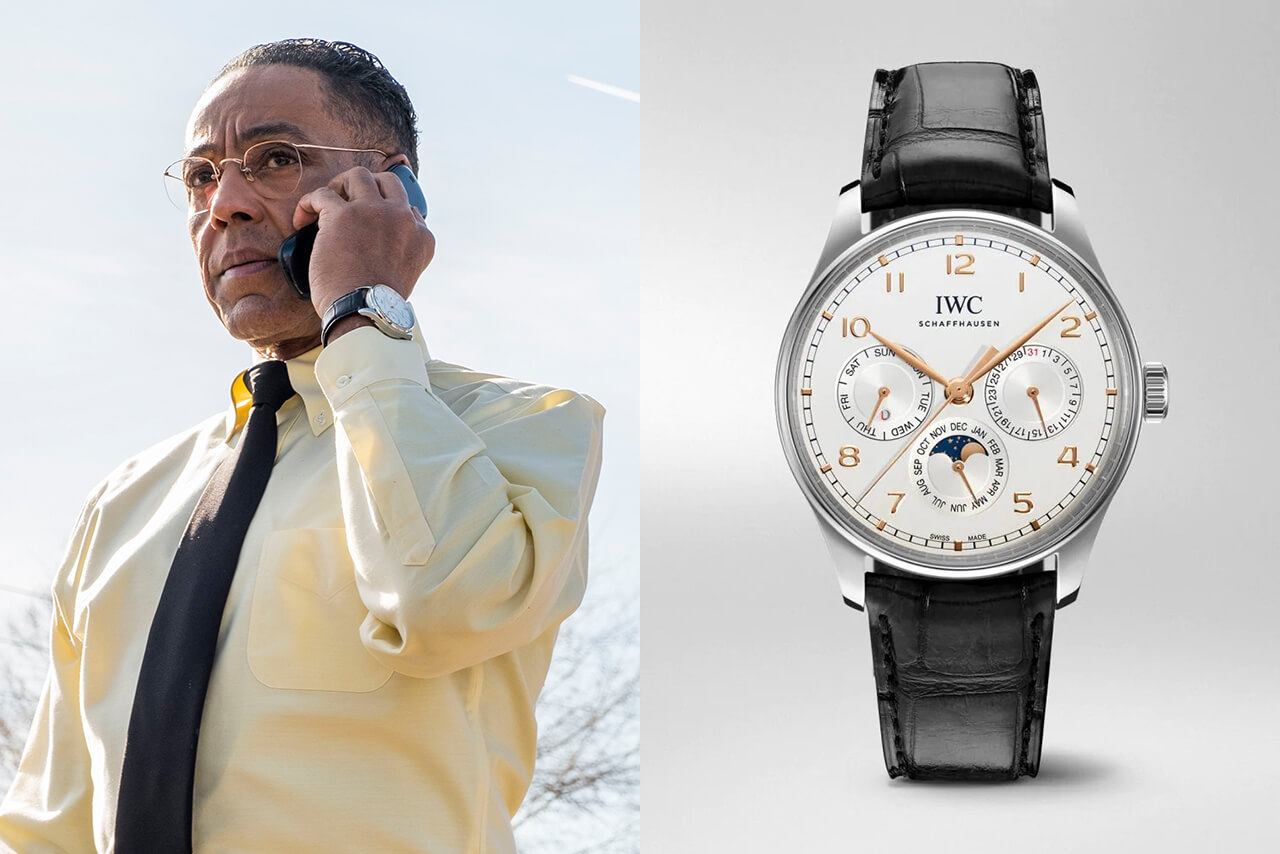 So good they had to bring him back for Better Call Saul, Breaking Bad’s Gus Fring, the chicken shop magnate come meth manufacturer, was the quietly intimidating antagonist that the show needed. Yet despite being happy to get his hands dirty – in both arms of the business – the impeccably turned-out Fring opts for a typically large (before the 2020 editions anyway) Portugieser. Not one to flaunt his wealth with too much gold, it’s an understated choice and one that, given he owns 12 restaurants, could still afford. 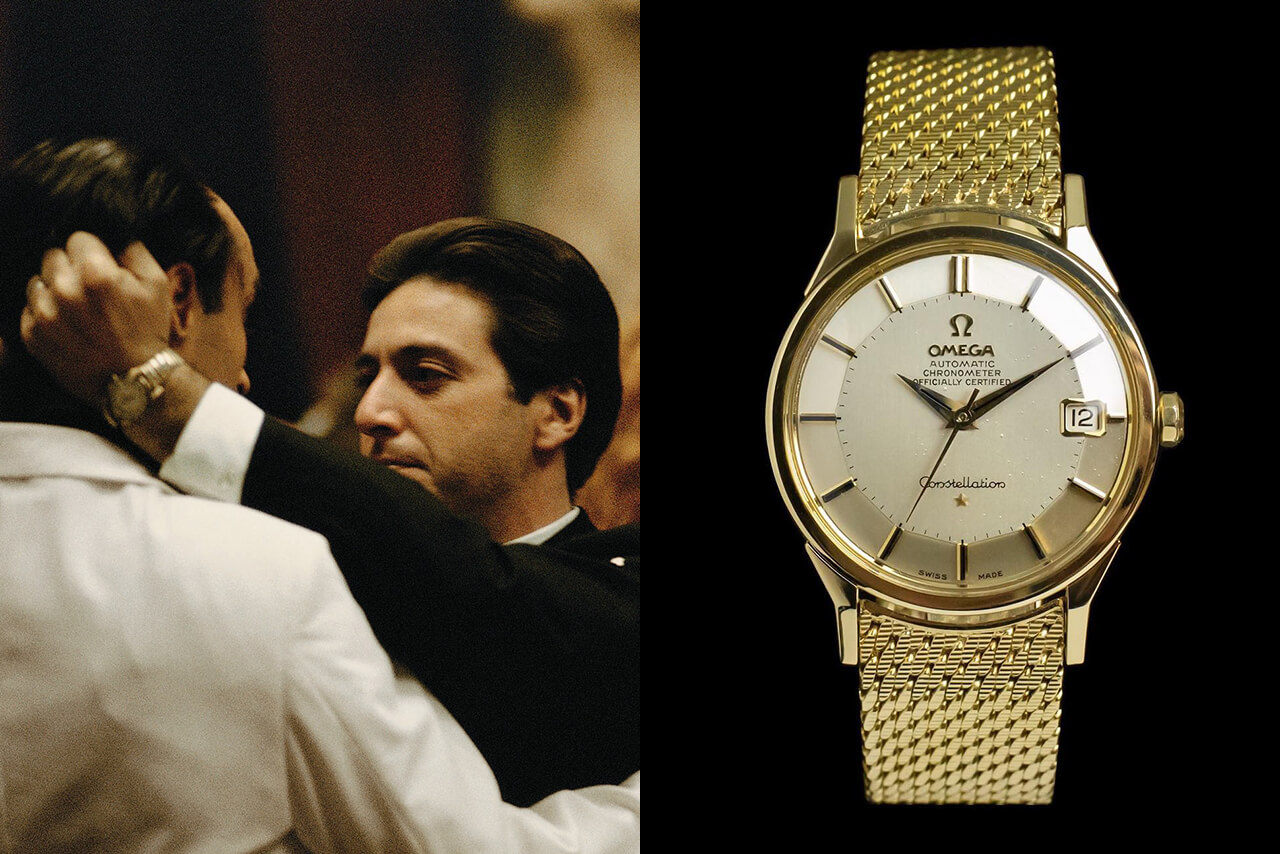 Another classic crime saga, another Al Pacino star turn. Sure, Corleone might veer more towards anti-hero than straight-up villain, but he is a Mafia boss and not exactly a nice guy. The stunning Omega Constellation on his wrist though, with tis 35mm case and pie pan dial, is a stunner. Set on a beautifully-finished bracelet, it’s vintage elegance incarnate. Fredo couldn’t have gotten away with it. Or anything, apparently.

We take a trip to Shaffhausen to get the low down on the history of ceramic watches from one of the...