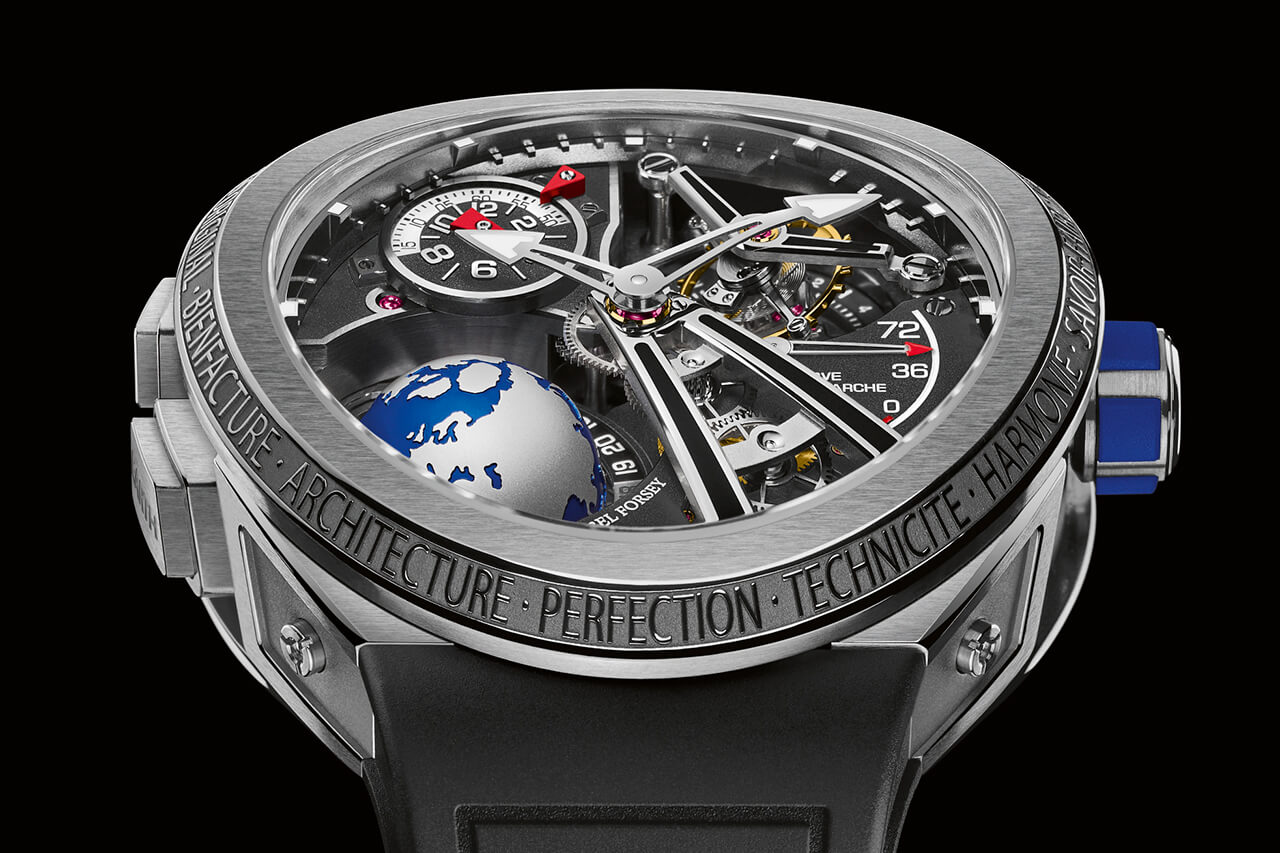 Greubel Forsey isn’t exactly synonymous with sports. Hell, you’d be hard-pressed to find someone willing to wear one for a light jog. Their watches are big, serious pieces of haute horology, finely-tuned and delicate. Well, with the Greubel Forsey GMT Sports that might be about to change. Maybe.

This is essentially Greubel Forsey’s answer to the Sports Luxe resurgence that everyone from Bell & Ross to Lange & Sohne seems to be jumping in on – though is far more on the luxe side of things. In fact, dial side it’s pure GF, with a turning GMT globe and the usual array of intense architecture throughout, including their signature slanted tourbillon.

The dial has a new feel to it. It’s a lot more closed than we’re used to with Greubel Forsey with its new layout, limiting slightly the amount of light and movement visibility it allows, but it does make it feel that bit more rugged. 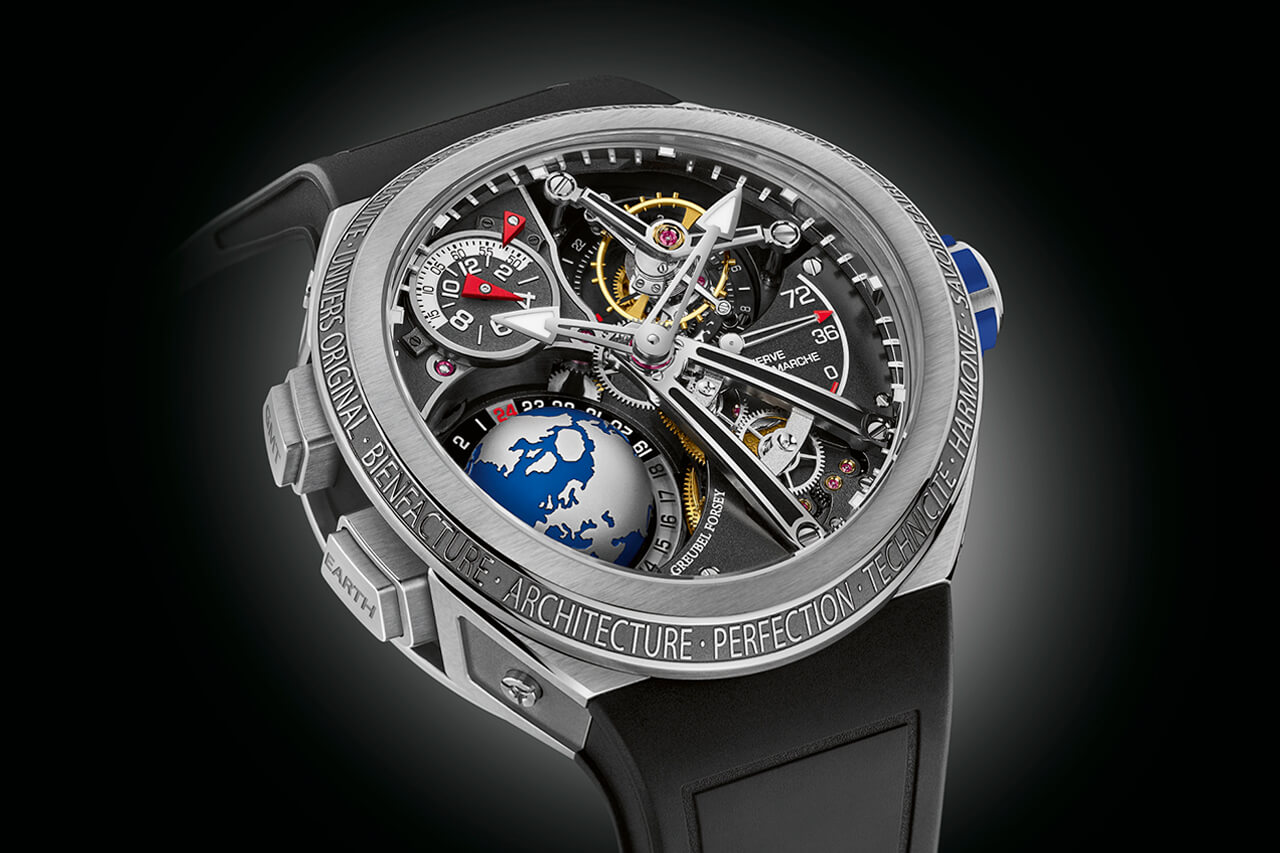 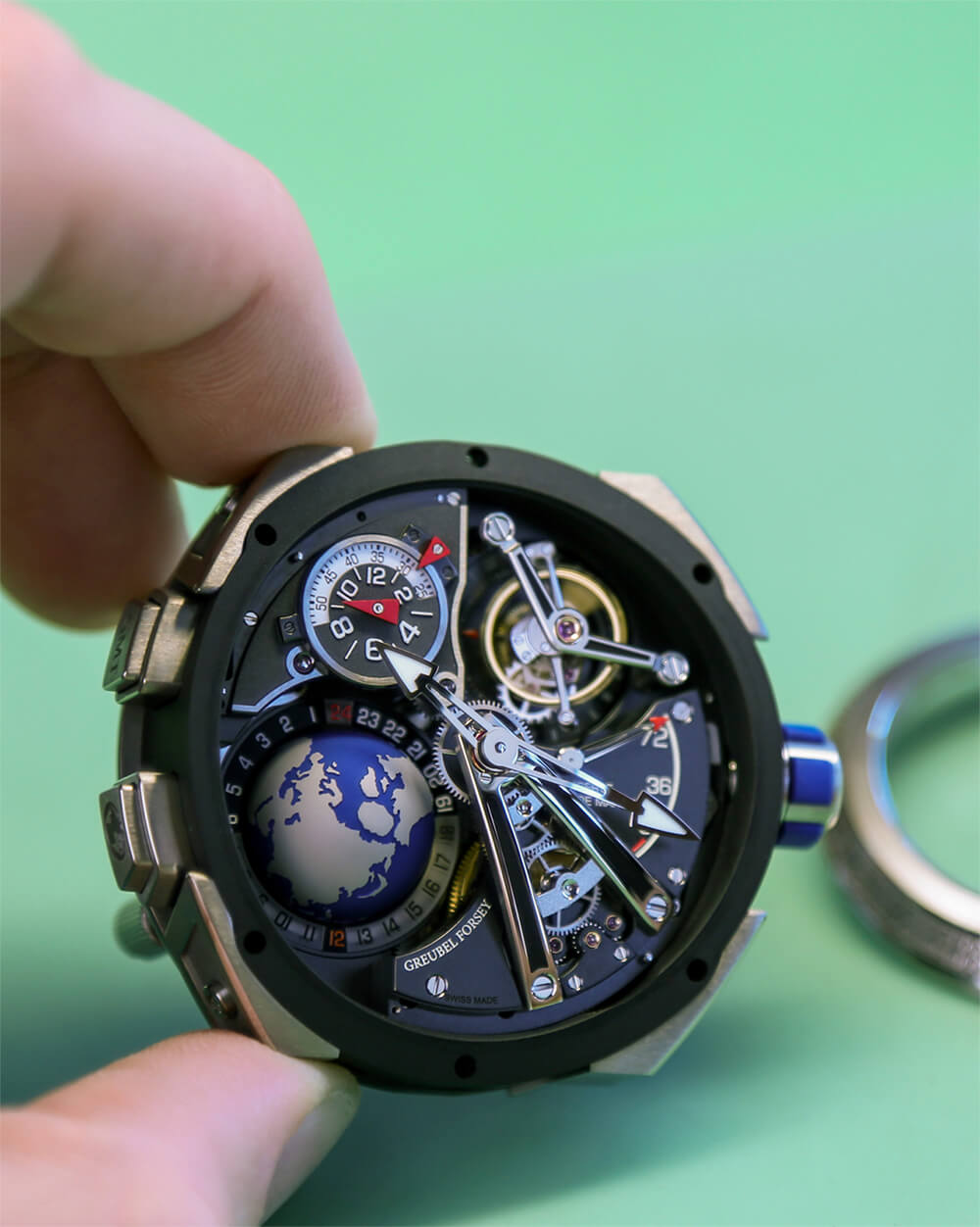 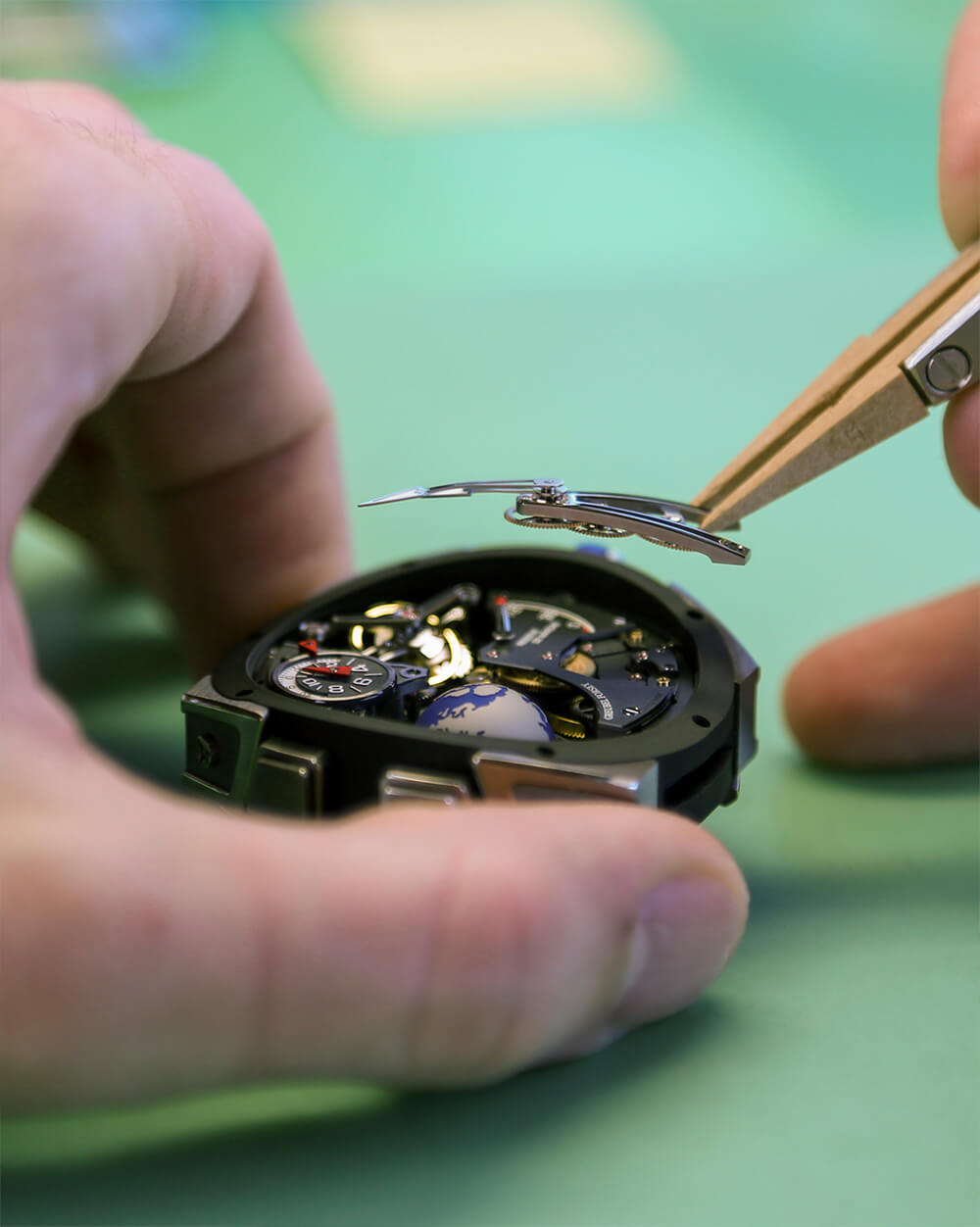 The biggest difference though is the case. Having worn previous Greubel Forsey GMTs I can say they’re not the most comfortable watches in the world. The Sports on the other hand has been developed with ergonomics at the fore, building a curved, ovoid case to sit on the wrist perfectly. The fact that it’s titanium is certainly a help too, because at 45mm it’s a big piece of metal.

From above, the case looks perfectly round yet as you move the watch through different angles the arches become more pronounced, creating a strange, sculptural look that we’ve never seen on a watch. It’s a shape that’s reinforced by the integrated strap, a prerequisite for any watch hinting at a Gerald Genta link. 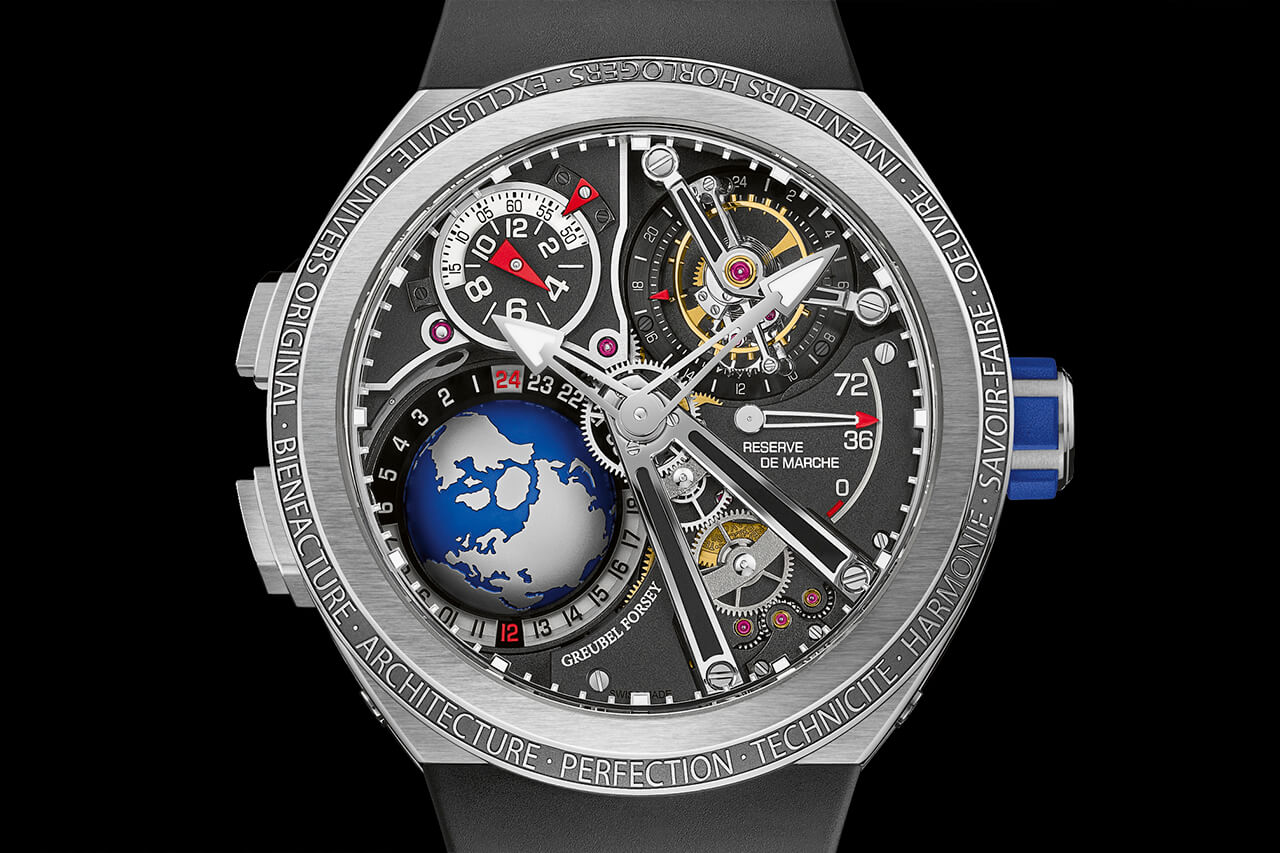 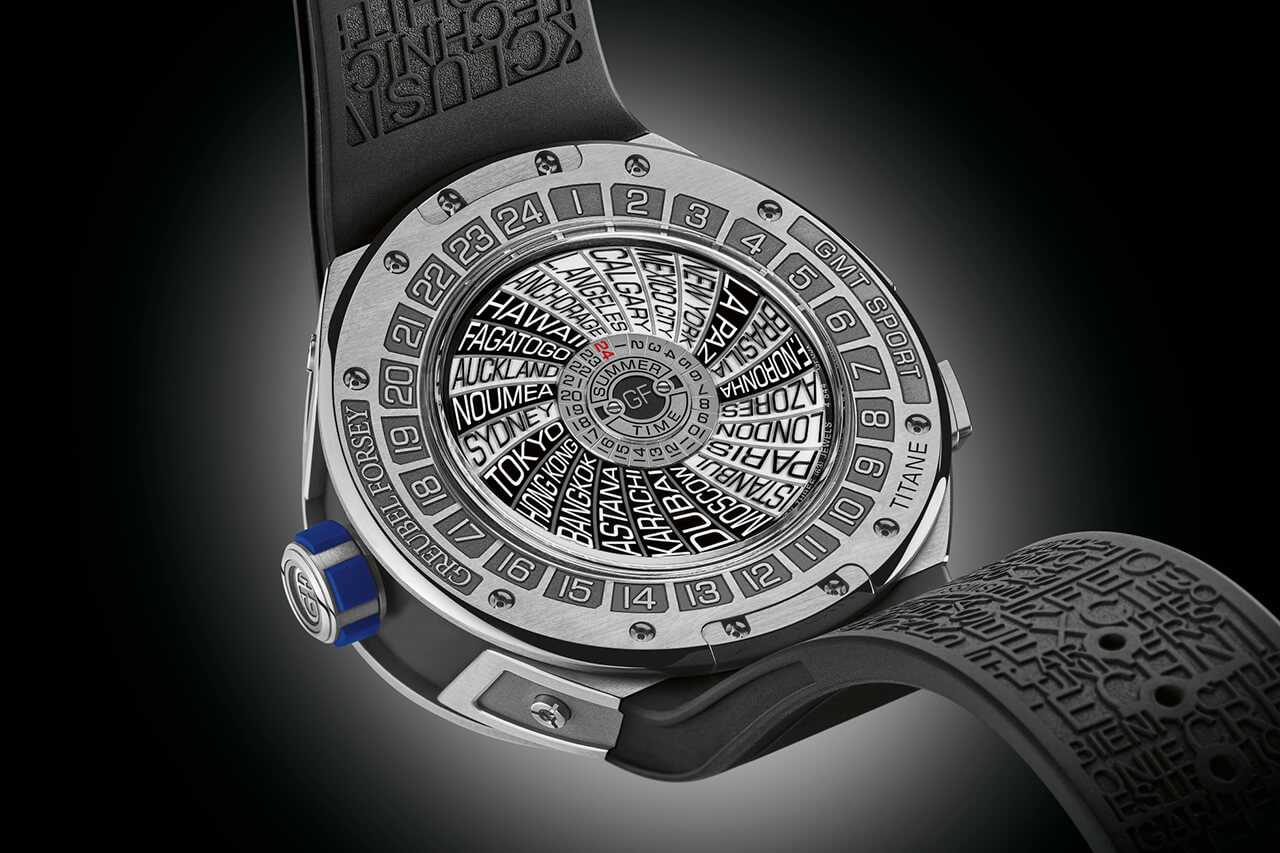 The bezel has been engraved with a mantra of Greubel Forsey values; it’s a bit on the nose, but it’s an extra level of detail most sports watches wouldn’t bother with. Whether it’s a nice touch or not I’ll leave up to you.

On the flipside, like always, is the full worldtimer, spelling everything out fully. It’s not the easiest place to read it of course, but then it’s simply an extra anyway. Thankfully the GMT Sport’s deployment clasp and rubber strap make it easier than other models to take off and look at the reverse.

This isn’t a sports watch in the traditional sense; more it’s Greubel Forsey throwing their hat into the ring alongside the Odysseus. It still has the finishing and technical magnificence the independent manufacture’s known for, just for once with comfort in mind, too. We’ll be able to tell you how well they succeeded when I manage to get one on my wrist – that’s if all 11 don’t sell before then, of course.