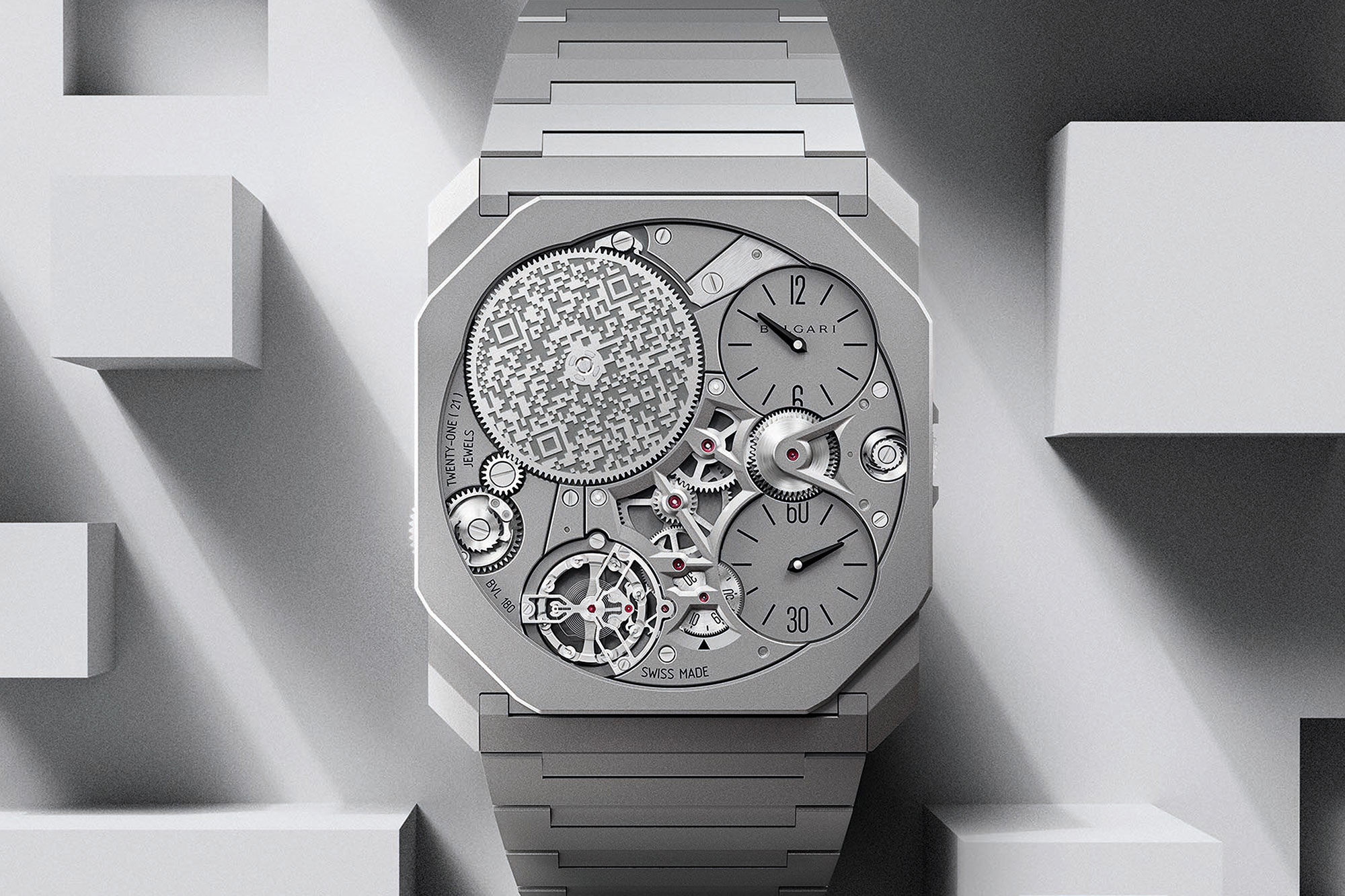 Over the past seven years Bulgari have well and truly taken the mantle of ‘King of Thin’, with seven world record breaking-ly thin watches released in consecutive years. Last year the Octo Finissimo Perpetual Calendar even won the Aiguille d’Or at the Grand Prix de Genève. So in 2022, with the Octo range celebrating its 10th anniversary, Bulgari’s new world record watch has got to be pretty special. Spoilers: it is. The new Bulgari Octo Finissimo Ultra is 1.80mm thick.

You read that correctly. 1.80mm. Let that sink in for a moment. It’s officially the thinnest mechanical watch ever created and a 0.43mm reduction from their own previous time-only world record watch and a 0.20mm reduction from the current record holder, the 2.00mm Piaget Altiplano Ultimate Concept. Plus, what’s all the more impressive is that for this challenge Bulgari restricted themselves to achieving it within the space of the same horizontal proportions and materials as its forebears. Specifically, a 40mm diameter octagonal case made from sandblasted titanium and tungsten carbide. 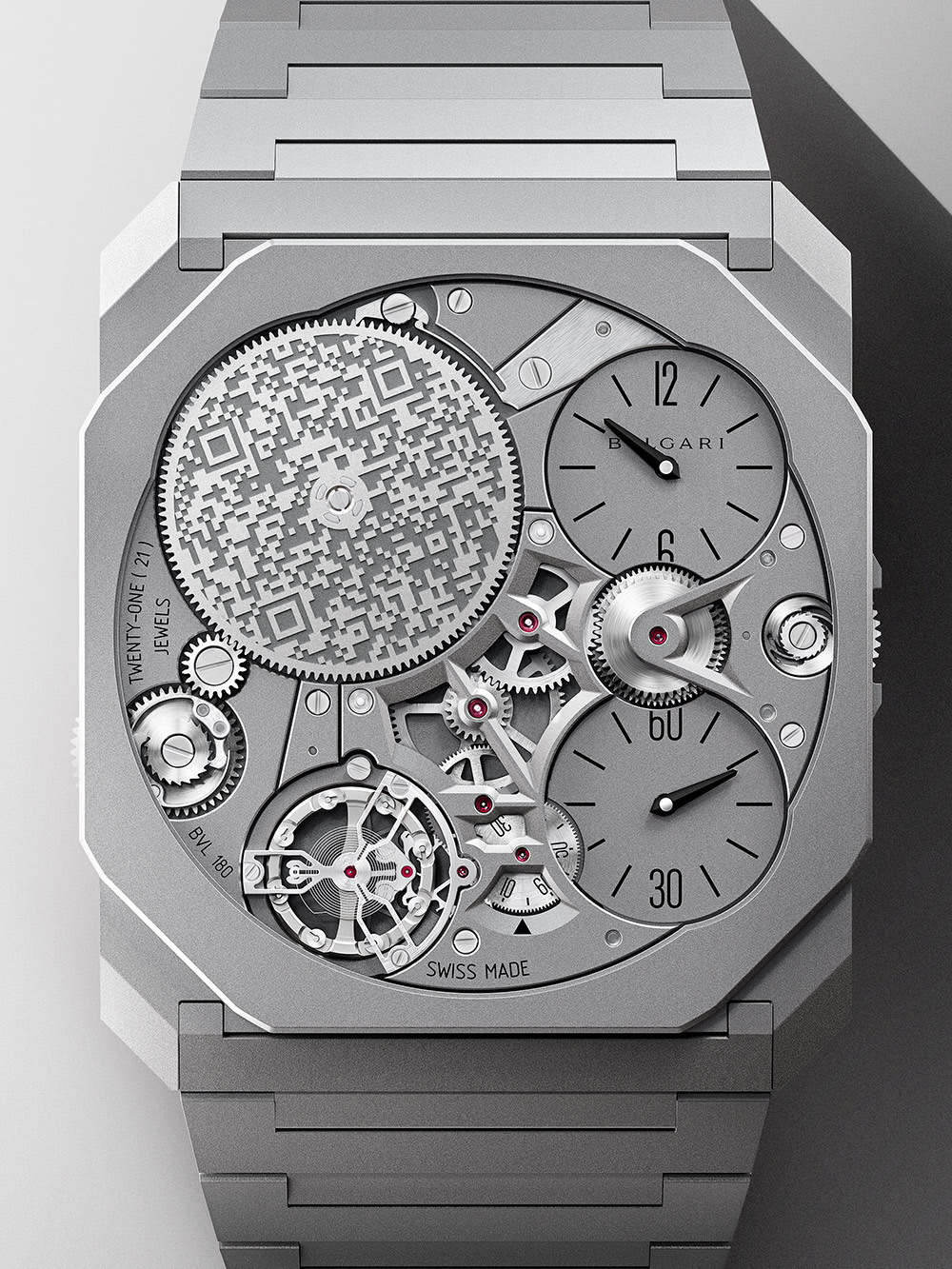 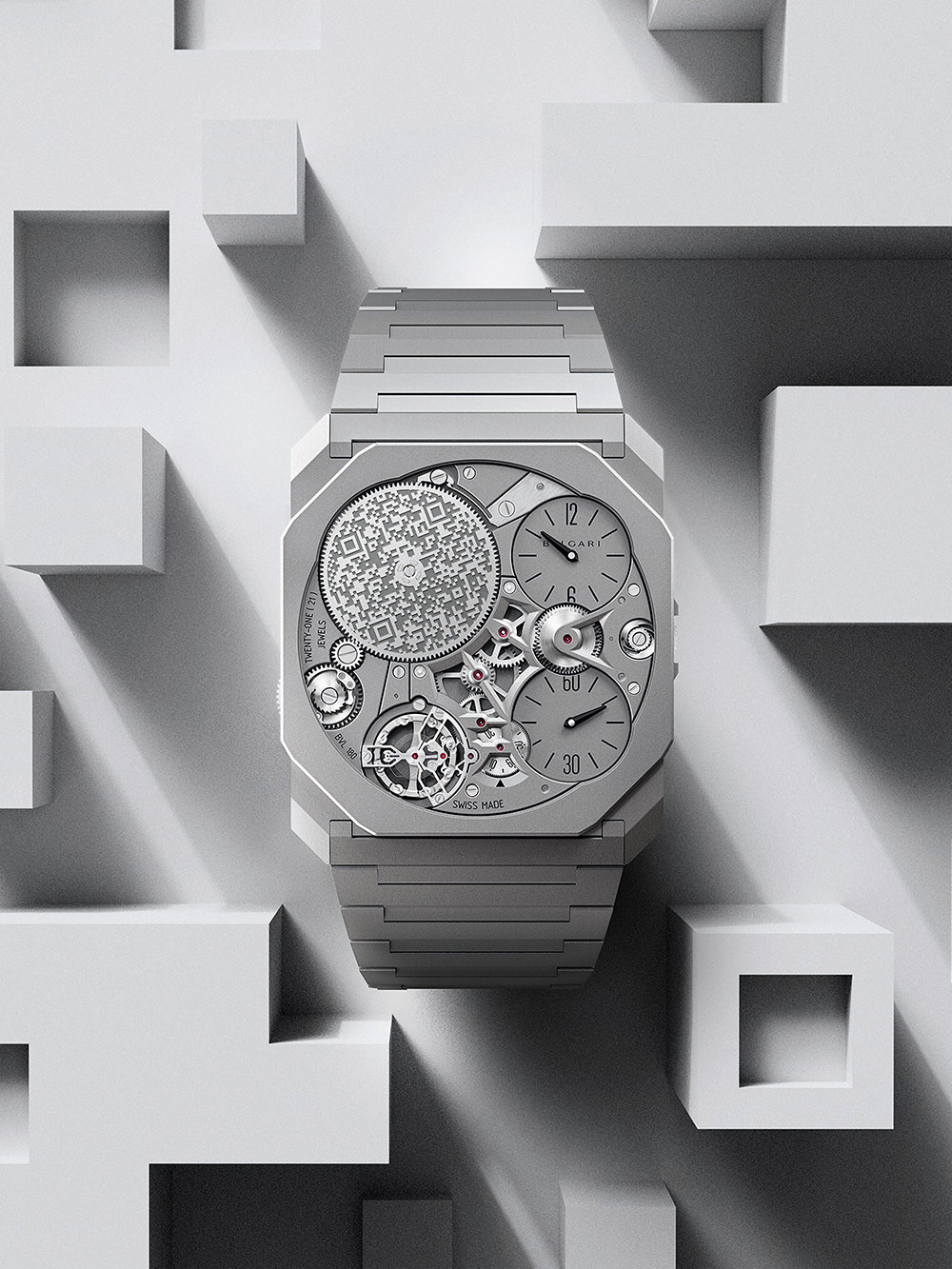 The tungsten carbide forms the caseback which doubles as the main plate and functions as the core backbone of the piece. Titanium is used for the bezel and upper portions to maintain the Octo Finissimo aesthetic. Safe to say that having it bend would be a disaster and with a combination of two extreme materials there’s no risk of that. Although just looking at the thing makes your mind boggle to think that it’s not flexible. The bracelet is also made from titanium and has the same thickness as the body of the watch, just to drive the importance of the size home. 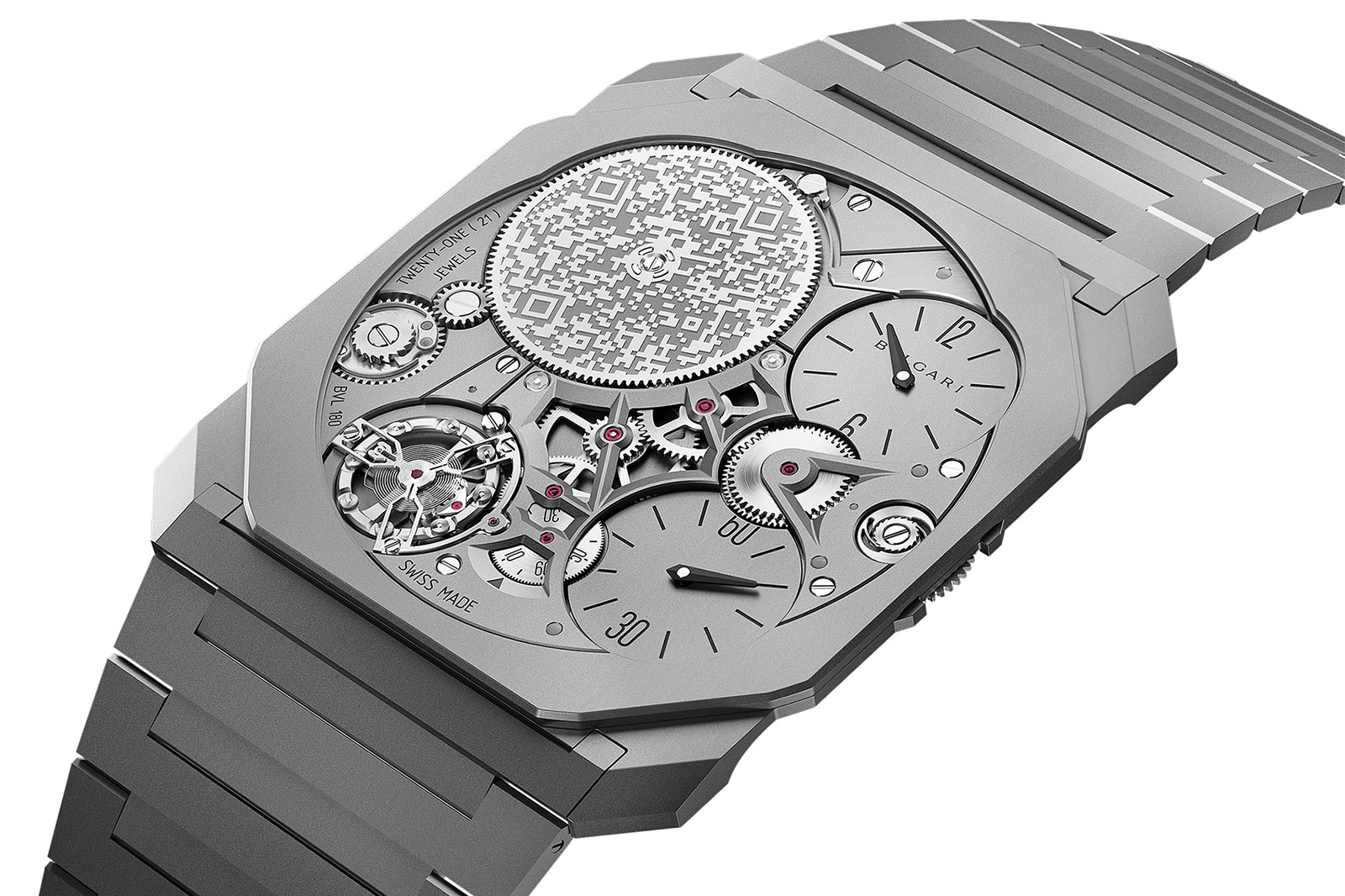 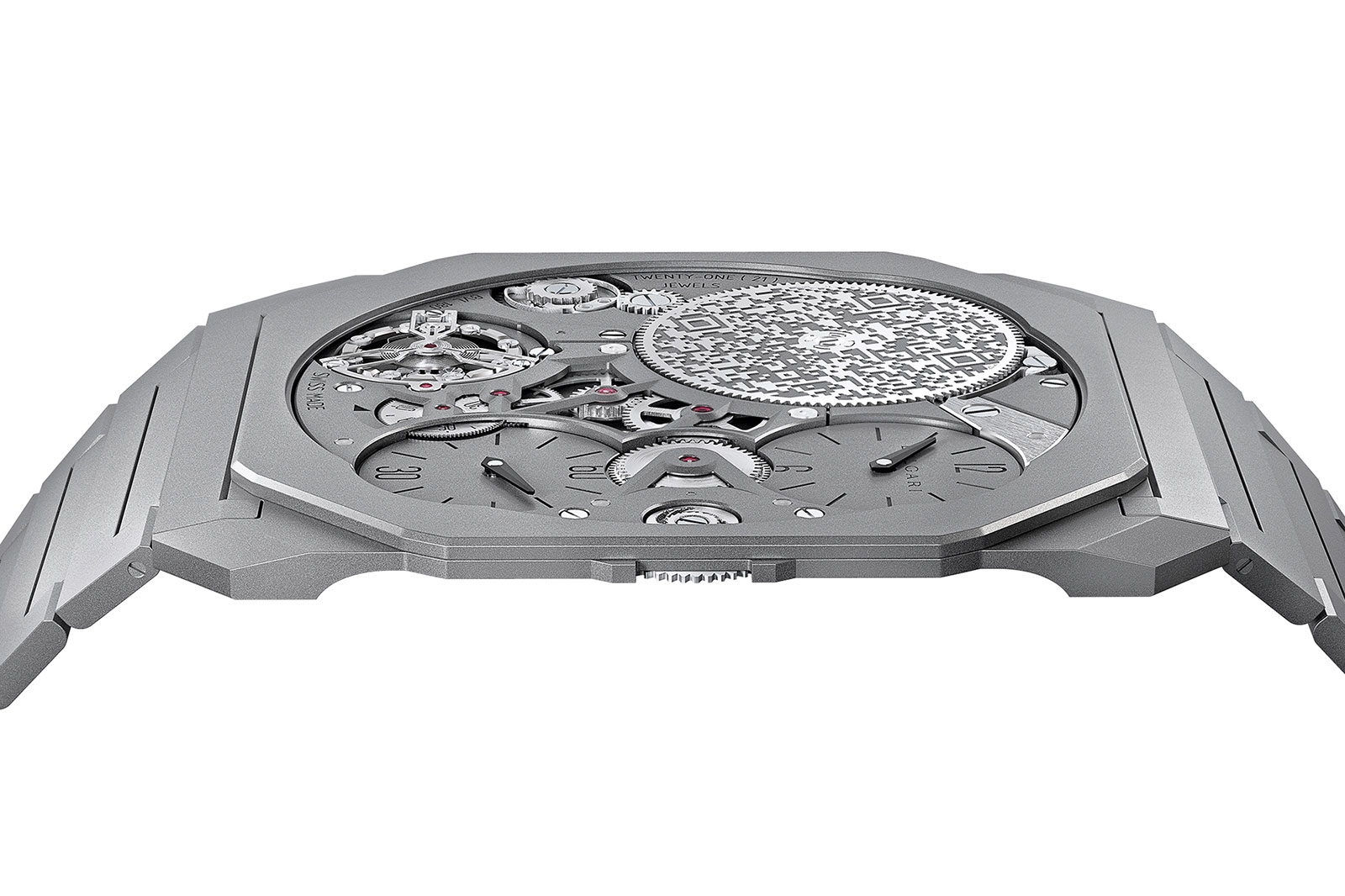 Style wise, if you look at the Octo Finissimo Ultra from straight above with no indication of how thin it is, it’s possibly the most bizarre display around. The upper left portion is dominated by the barrel, which sports the image of a QR code on it (more on that later) while the hours, minutes and seconds are separated on a trio of off-centre subdials along the right side regulator style. The hours and minutes are easy to spot but the seconds are tucked away on a tiny white subdial, partially obscured below a structural bridge, that slightly overlaps the edge of the minutes dial on the left. 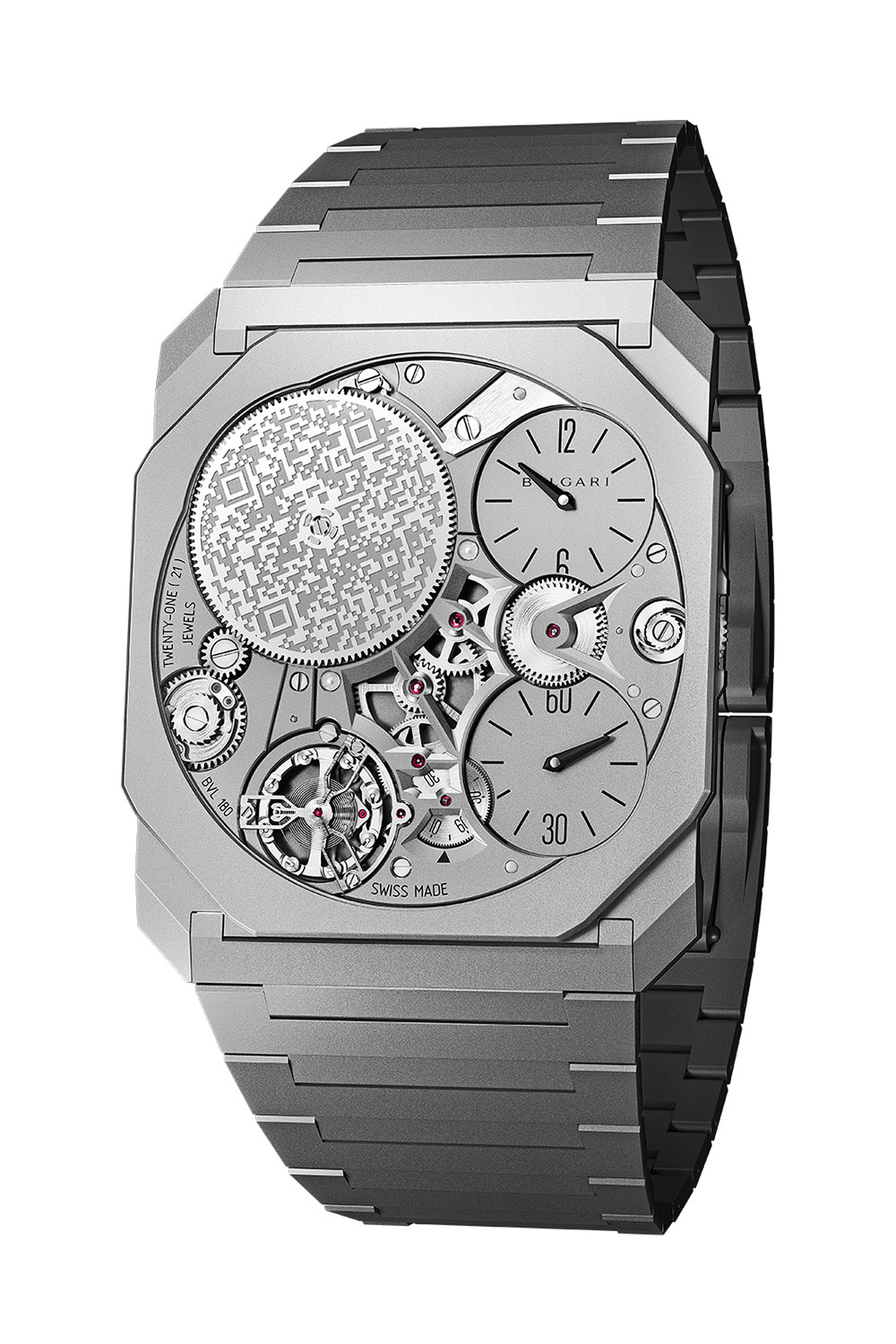 Of course, all these peculiarities are down to the size of the piece. The caseback, the subdials, the movement and the sapphire glass are more or less on the same plane as each other. Which in the development process required starting from scratch and forgetting everything they knew about watchmaking. Unlike previous Octo Finissimos that look like regular watches, the extremity of the Ultra’s thinness has resulted in a strange, surreal display. That small seconds is ridiculous. But at the end of the day, the whole piece functions like a conventional watch and that’s the goal. 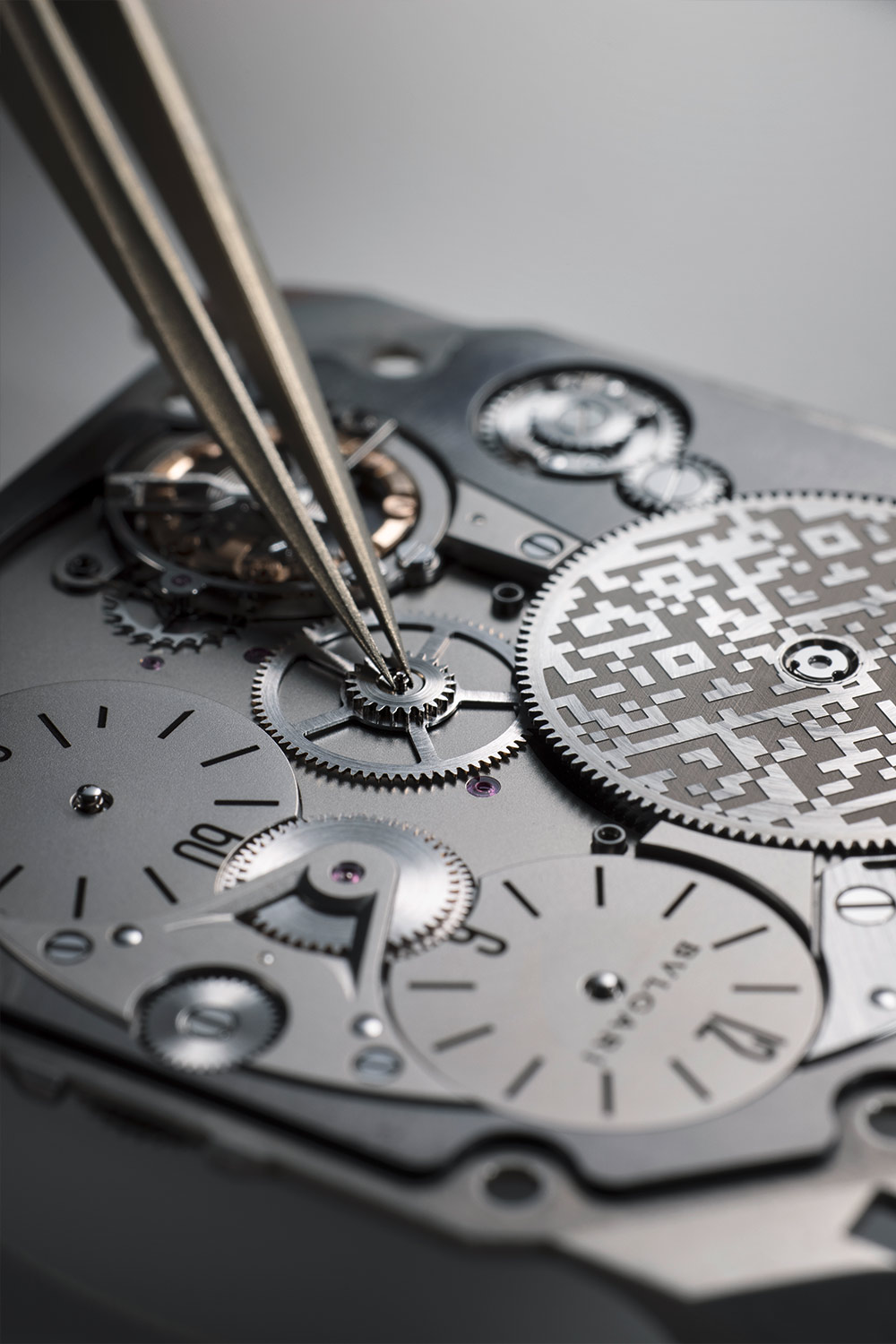 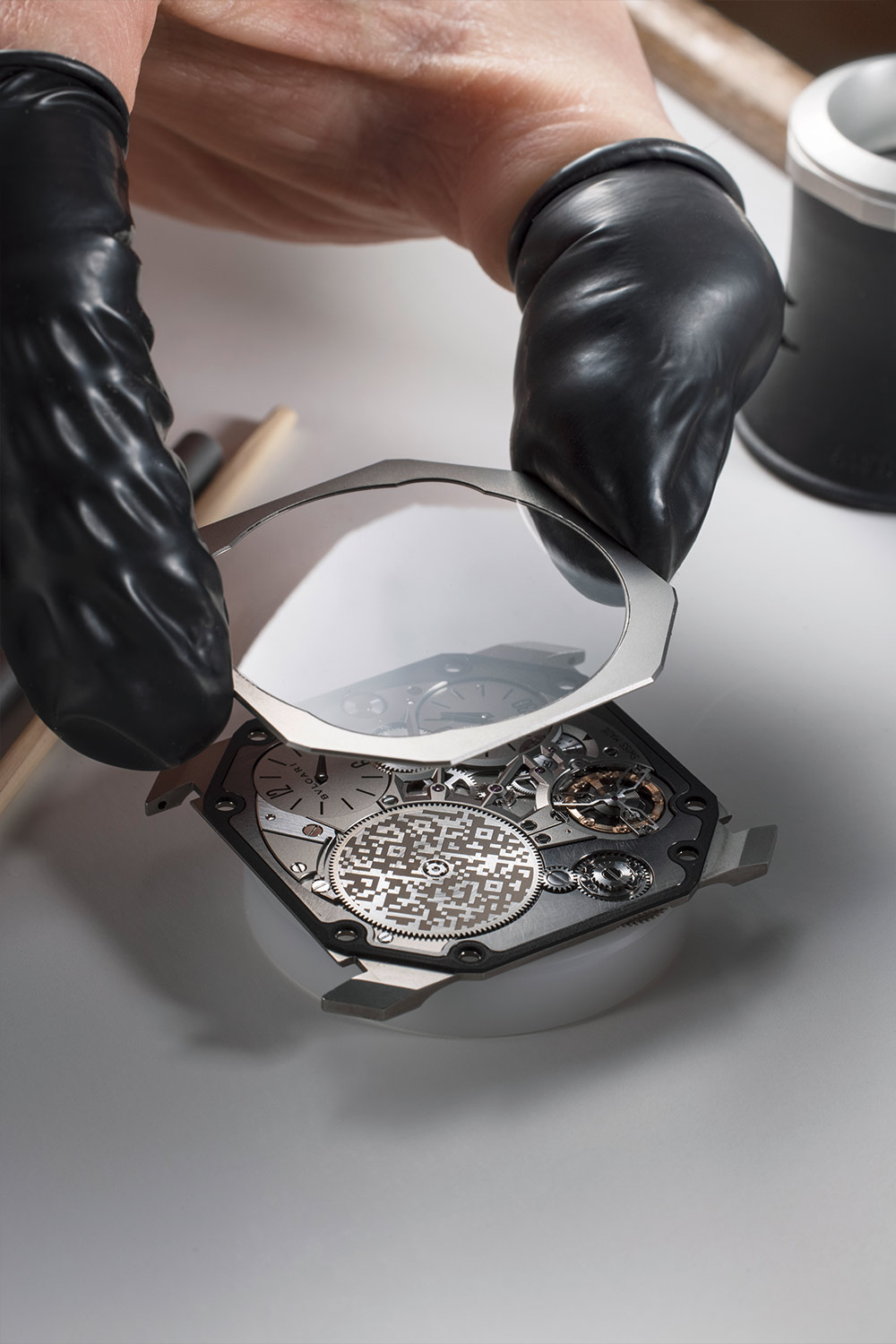 The movement inside (if you can call it an “inside” on something this thin) is the BVL 180, named after the 1.80mm thickness. Miraculously it has a 50-hour power reserve, which doesn’t seem possible at this size but is due to the wide barrel. Although the watch is manual winding so it needs to be kept topped up. Thinking about the barrel again, I already mentioned that it’s decorated with a QR code… 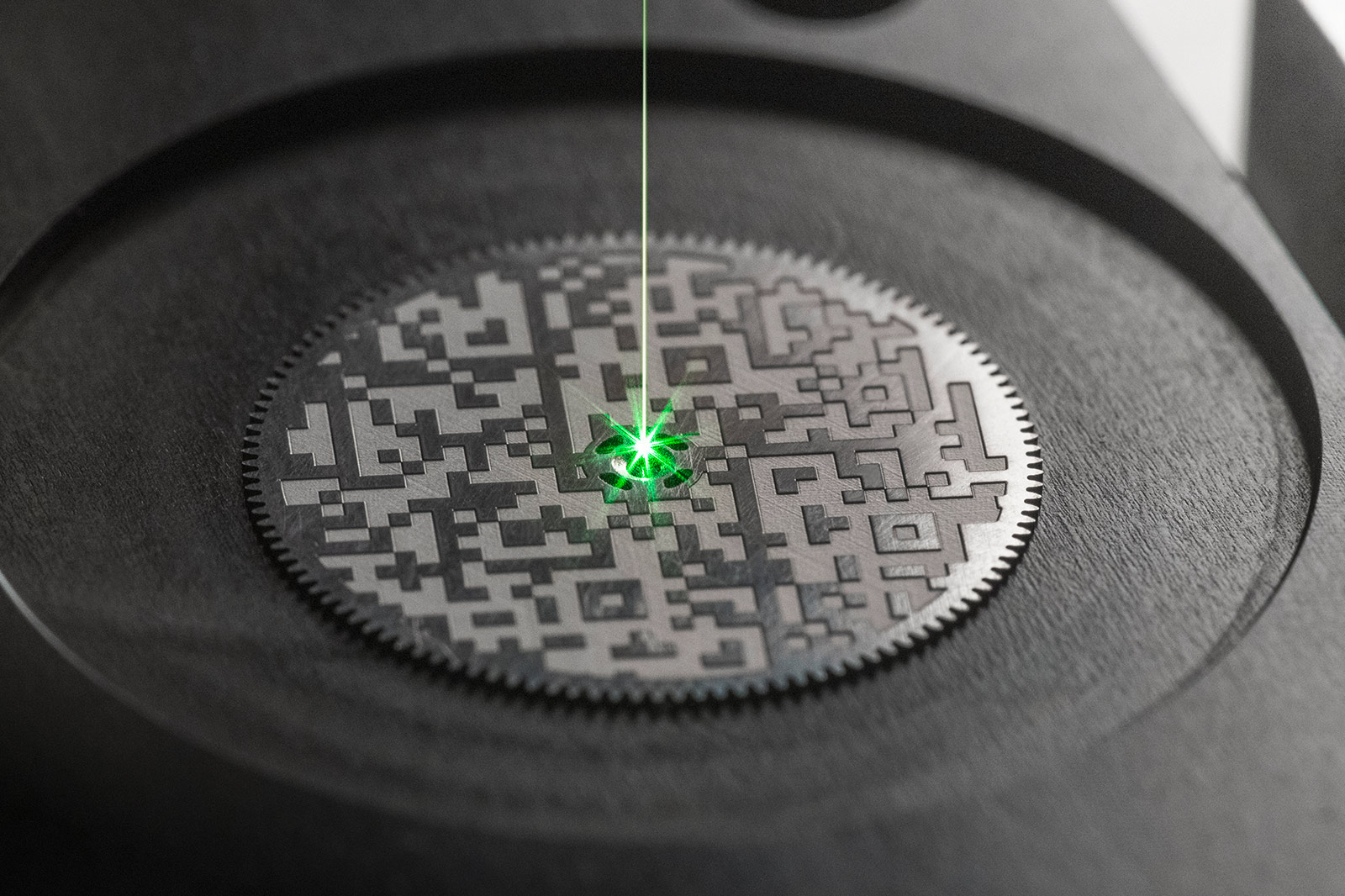 Alongside the watch itself, whoever buys one of the 10 limited edition pieces will also receive an NFT. Details are relatively sparse at the moment as Bulgari have said they’ll be unveiling an entire digital ecosystem once the watches hit the market in a few months’ time. What we do know is that the QR code will lead to a range of interviews and information about the watch, its design and its history. The NFT artwork will prove the watch’s authenticity and link it intrinsically to the new owner.

How much does it cost to own the world’s thinnest watch? A cool €400,000. Safe to say you’re paying for more than just the weight of raw materials. Your move Piaget.