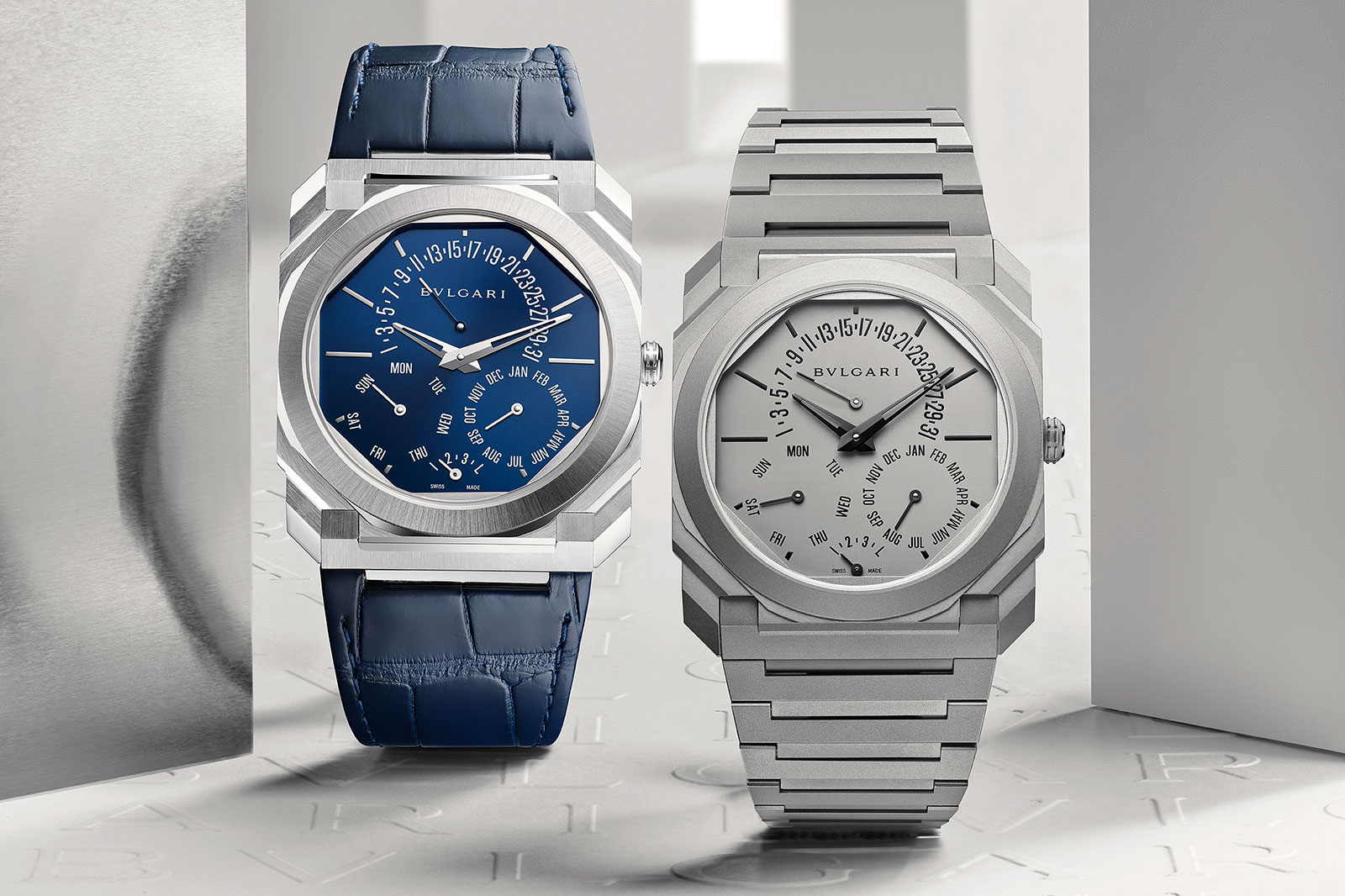 Since 2014 Bulgari has set itself the task to break a world record every year and seven years on they’re still at it. For last year’s Geneva Watch Days is was their Octo Finissimo Tourbillon Chronograph Skeleton Automatic, essentially a mash-up of their greatest hits. Now though, they have their sights firmly on one of the most competitive complications out there: the Perpetual Calendar.

Let’s start with the headline: the watch is 5.8mm thick with a new 2.75mm calibre developed especially for it. It requires a fabrication process on a whole other level to fit all 408 components into the extremely limited space, necessitating insane levels of spatial optimisation and the use of a micro-rotor. That’s par for the course in Bulgari’s Finissimo range, but taken to the nth degree with a calendar that factors in leap years. 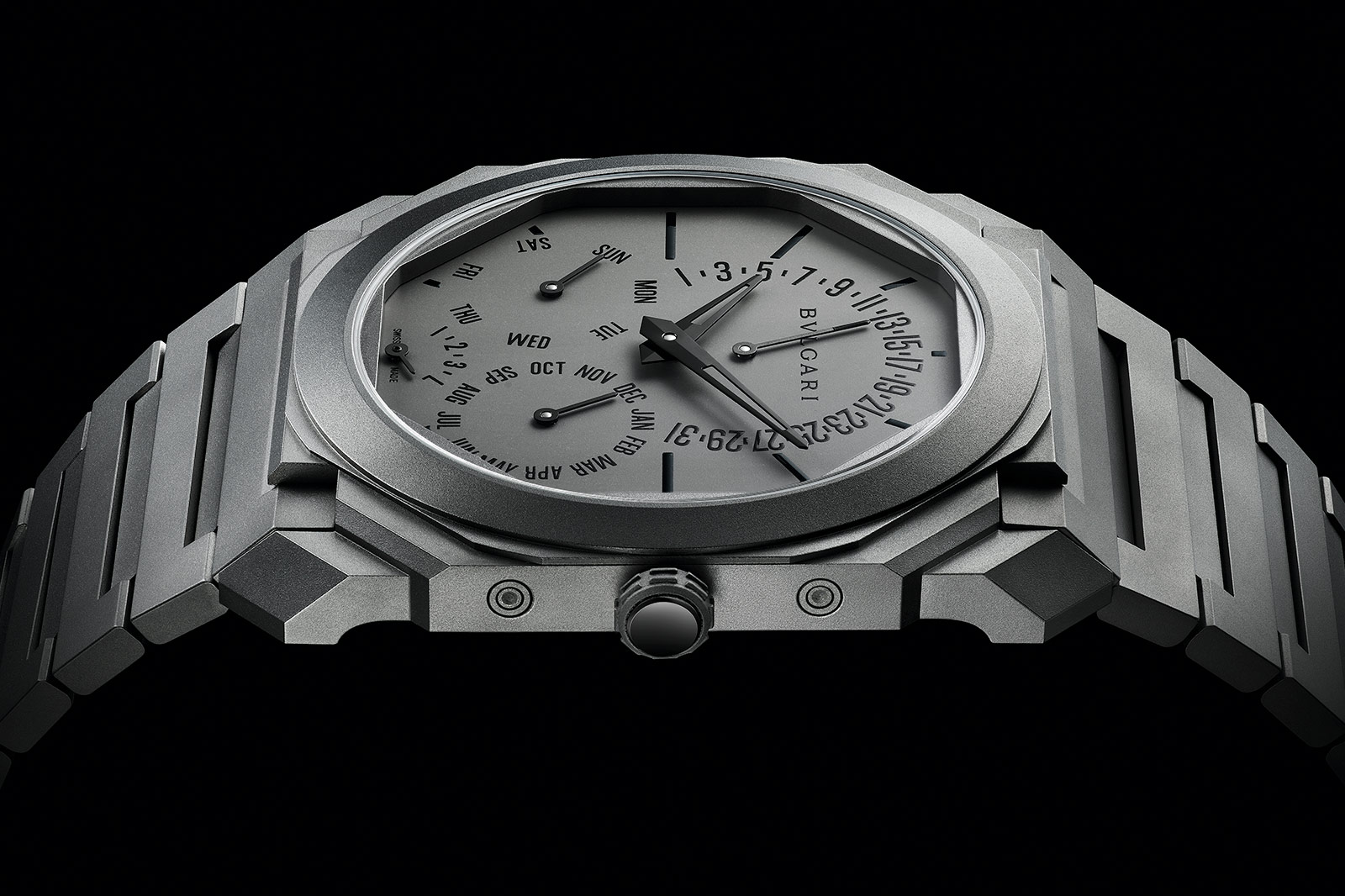 Given the space Bulgari has to work with here – and the Finissimo’s signature, subdued colours, simplicity is key. A large retrograde date occupies the top half of the dial and a weekday subdial is positioned between 7 and 8 o’clock, which is mirrored at 4 and 5 by the months. A retrograde leap year counter can also be found tucked at 6 o’clock. The rest of the empty dial space is occupied by the hour markers, which are of varying lengths, creating a simple and pleasing sun burst effect. 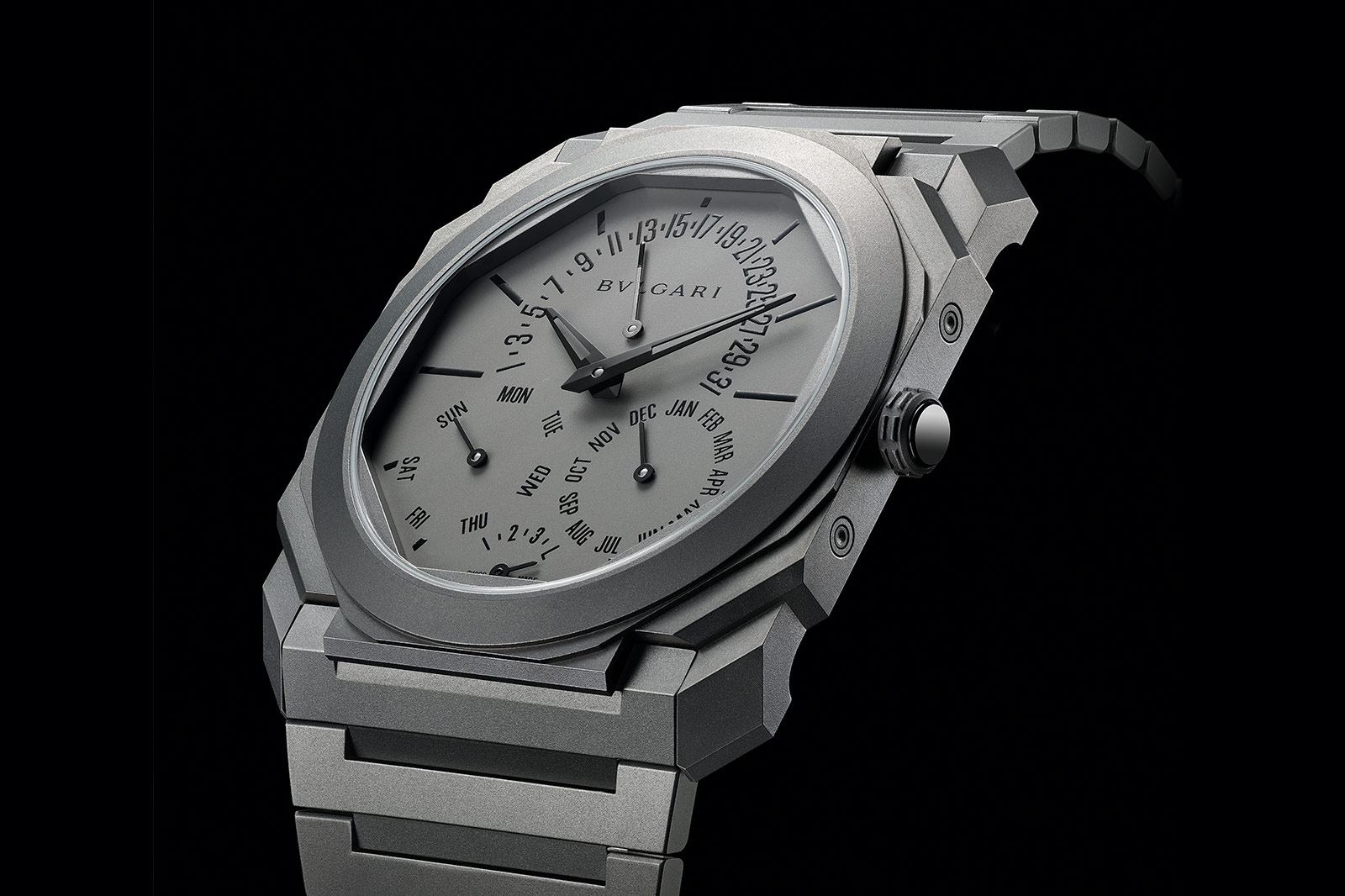 The signature, octagonal case that gives the watch its name looks as striking as ever, following the same aesthetic language laid down by Gerald Genta (he of Royal Oak and Nautilus fame) and that has defined the Octo Finissimo since the Tourbillon Manual in 2014. 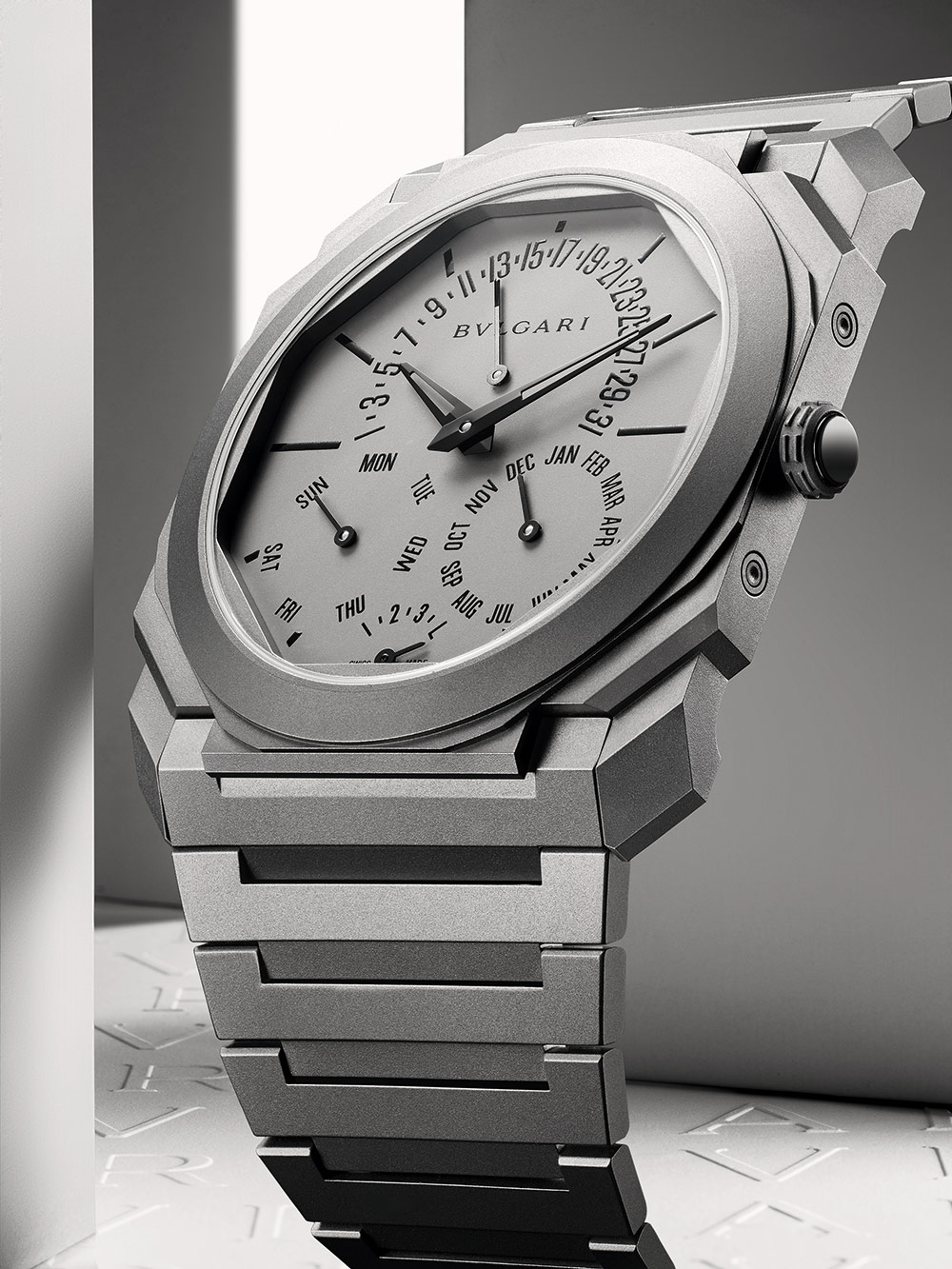 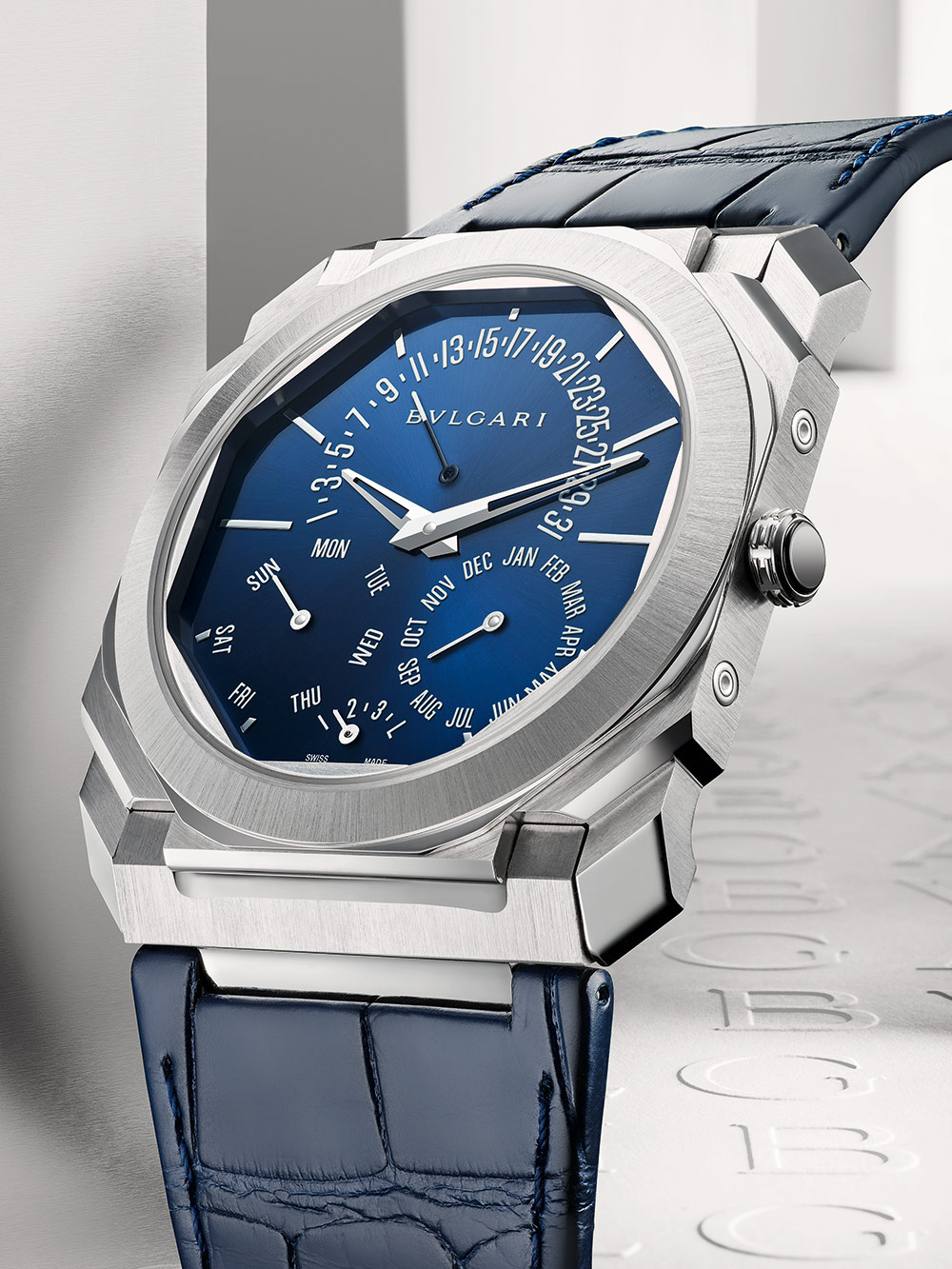 The new watch however is available in two different materials: an Octo Finissimo signature titanium version with matching titanium dial or a platinum variation with a blue lacquered dial. The platinum edition is a celebration of the future of the range, looking forward to the 22nd century – a reference to the year 2100, when the perpetual calendar actually needs to be re-adjusted. Why platinum is more futuristic than sleek, monochromatic titanium is something I can’t quite figure out, but it’s a lovely take on the formula either way. 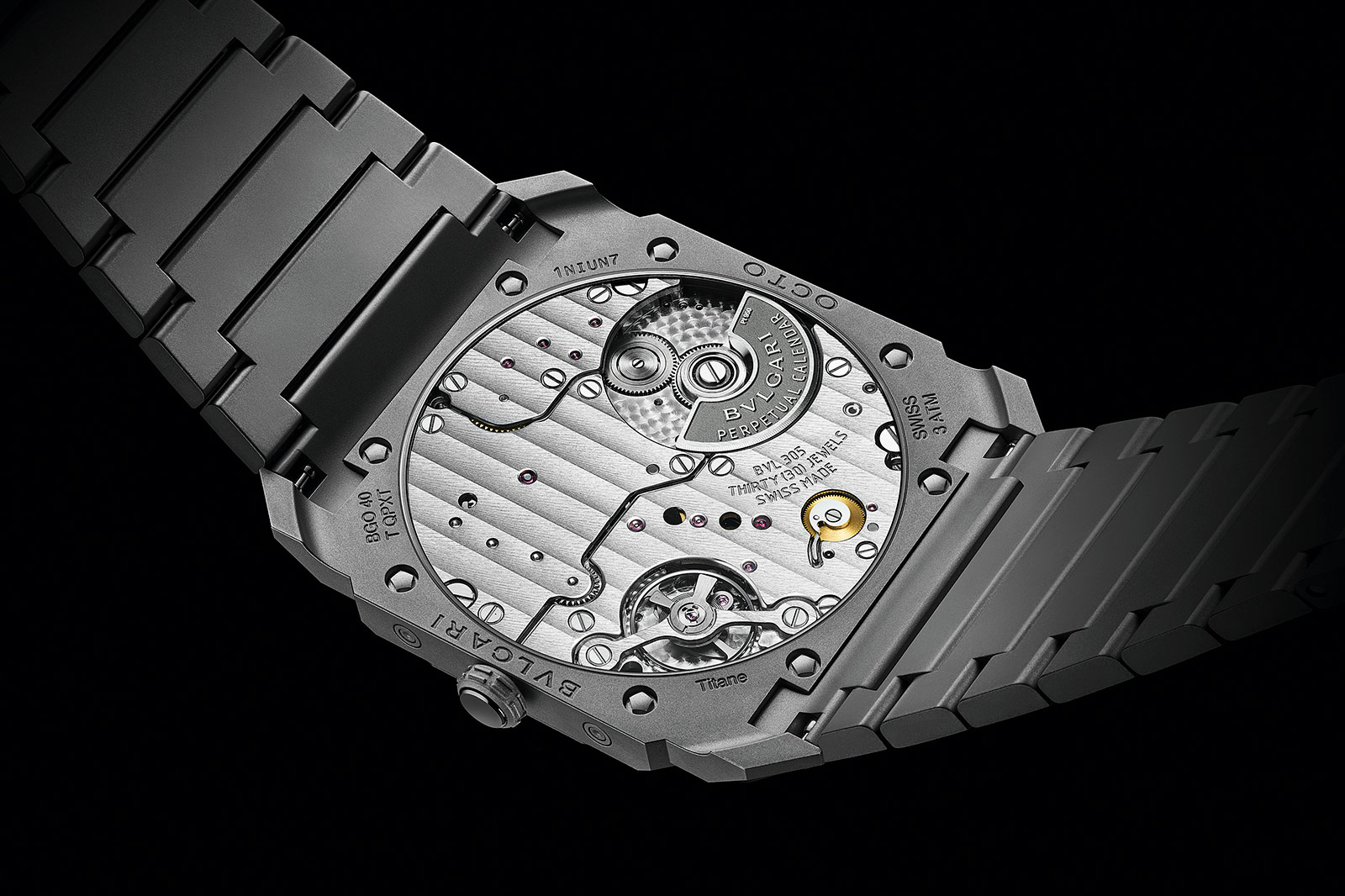 Powering the whole thing is the new Calibre BVL 305 developed by the Manufacture in Le Sentier and it has a 55-hour power reserve. As I’ve already mentioned, it’s pretty damn svelte and while there’s not much to actually see with so many overlapping parts, the side-on silhouette kind of says everything it needs to. 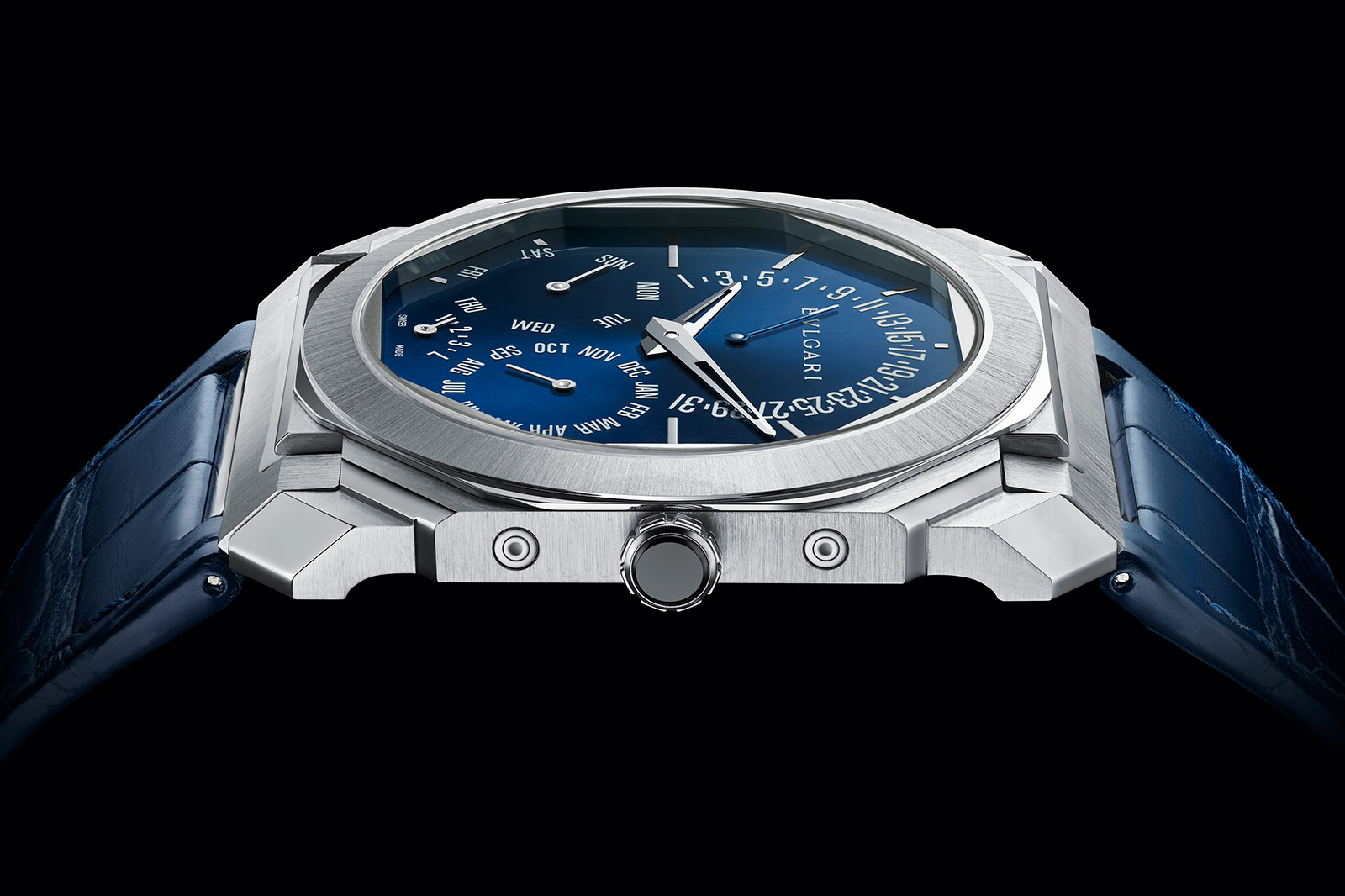 Last year was honestly not all that interesting. The watch was impressive for sure, but it was two of their previous world record breakers put into one watch. The Perpetual calendar however has replaced the tourbillon as the de facto high complication for flexing those horological muscles and with so many other ultra-thin versions on the market from the likes of Vacheron and Patek, this might be Bulgari’s most important record to date.