This weekend the top golf players from the USA and Europe will be battling for the honour of winning the prestigious Ryder Cup at the Whistling Straits course for their team. It’s an Atlantic brawl that’s become one of the most anticipated competitions on the calendar as international talent gather to face off. And what does a gathering of golfers mean? Well, it means a gathering of superb watches as well, because golf is notorious for big sponsorships and legendary wristwear.

So, in the spirit of competitive fun, we asked the question, which team has stronger wrist-game, the US or EU? To find out, we’ve taken a watch from the collections of 5 players from each team and paired them against each other in a head to head over 5 horological holes, with par being set at the same value as the corresponding hole at Whistling Straits. Who will end up on top USA or Europe? And will Rolex dominate the competition? Let’s find out. 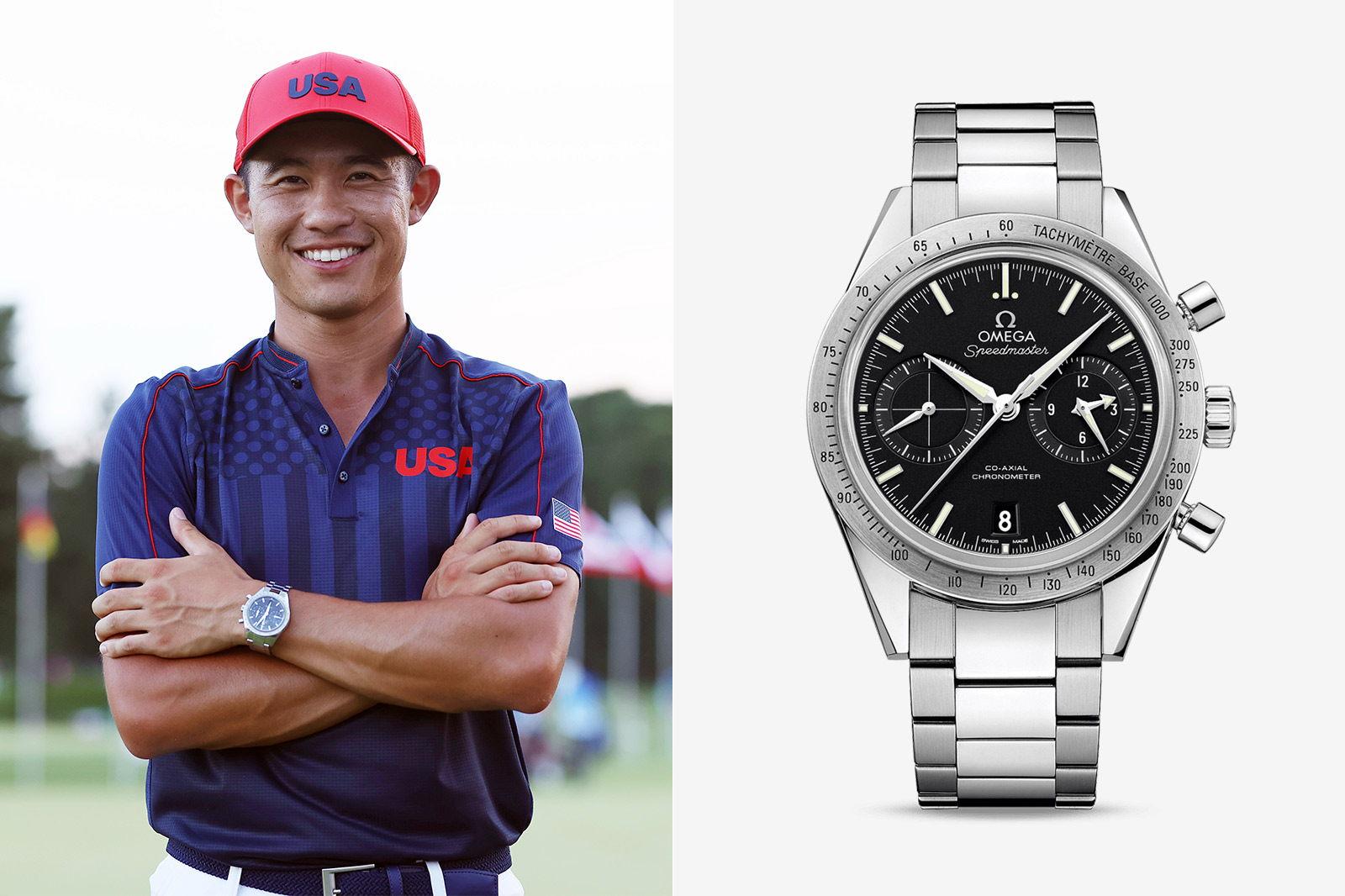 For the opening hole, it’s the battle of the 24 year-olds as America’s Collin Morikawa goes up against Norway’s Viktor Hovland. It’s a fitting head to head because both turned pro in 2019 and since then have hovered around the top echelons of the sport. Currently Hovland sits at rank 5 on the PGA tour while Morikawa is a few places lower at 26.

We’ve also put them against each other as they each have a prestigious chronograph. Morikawa sports the limited edition Omega Speedmaster ’57 while Hovland has the Audemars Piguet Royal Oak Selfwinding Chronograph with a panda dial. 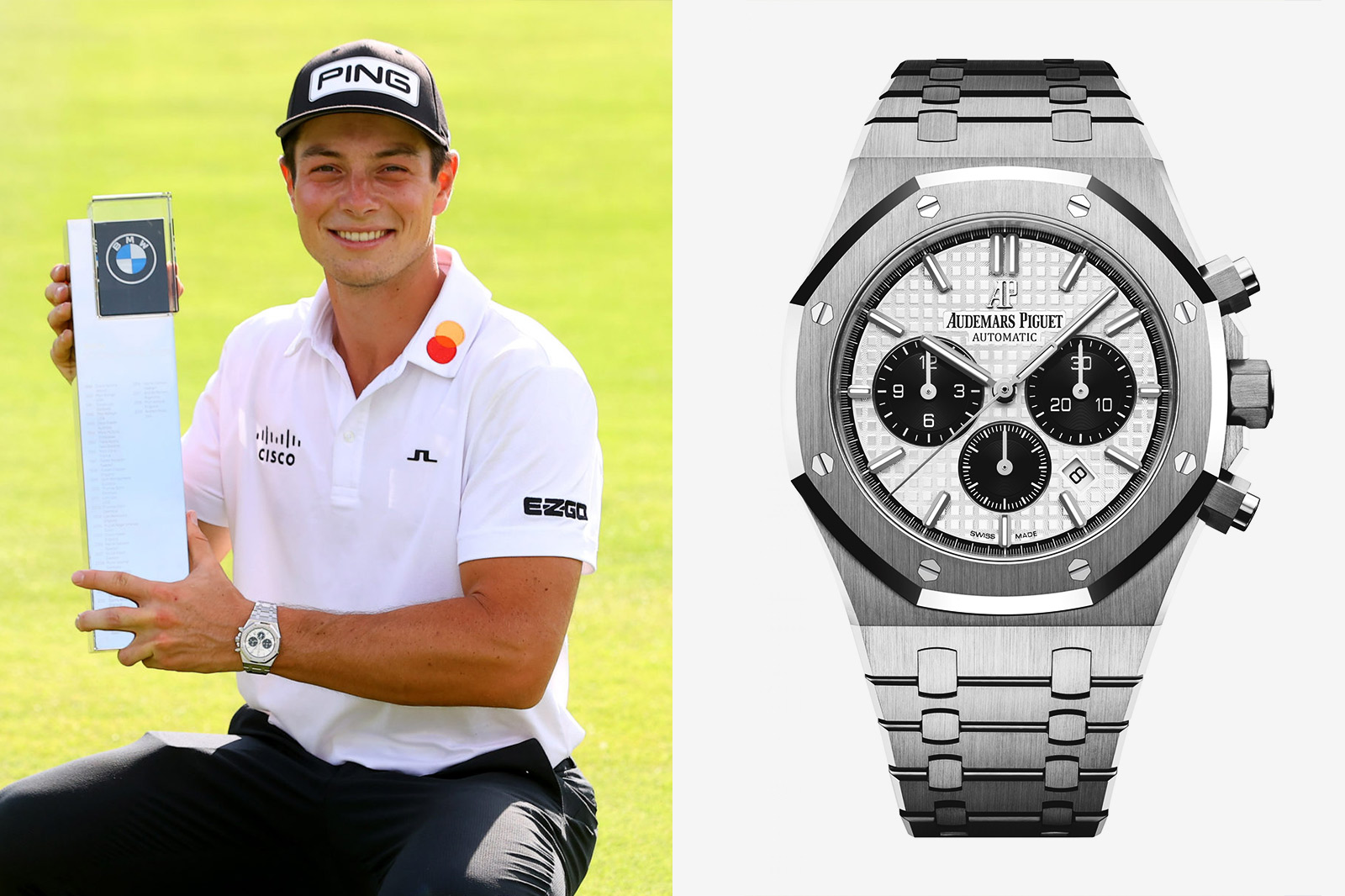 The Royal Oak is one of the most well regarded sports luxe designs and there is no sport more luxe than golf, so it makes sense that AP would have plenty of ambassadors in the sport. Its thick bezel and Grand Tapisserie dial are the equivalent of a particularly fine golf cap and patterned trousers. Add the chronograph for additional functionality and you’re onto a winner.

However, while the AP is excellent, it can’t stand up to the Speedmaster. The ’57 is inspired by the original Moonwatch which survived the g-force of leaving the stratosphere. So, the g-force of a golf swing is no issue. And unlike a Daytona, the ’57 is actually exclusive because of its limited edition status, meaning you won’t find a chronograph to rival it in the entire clubhouse.

It’s par for the Royal Oak and a birdie for the Speedmaster. 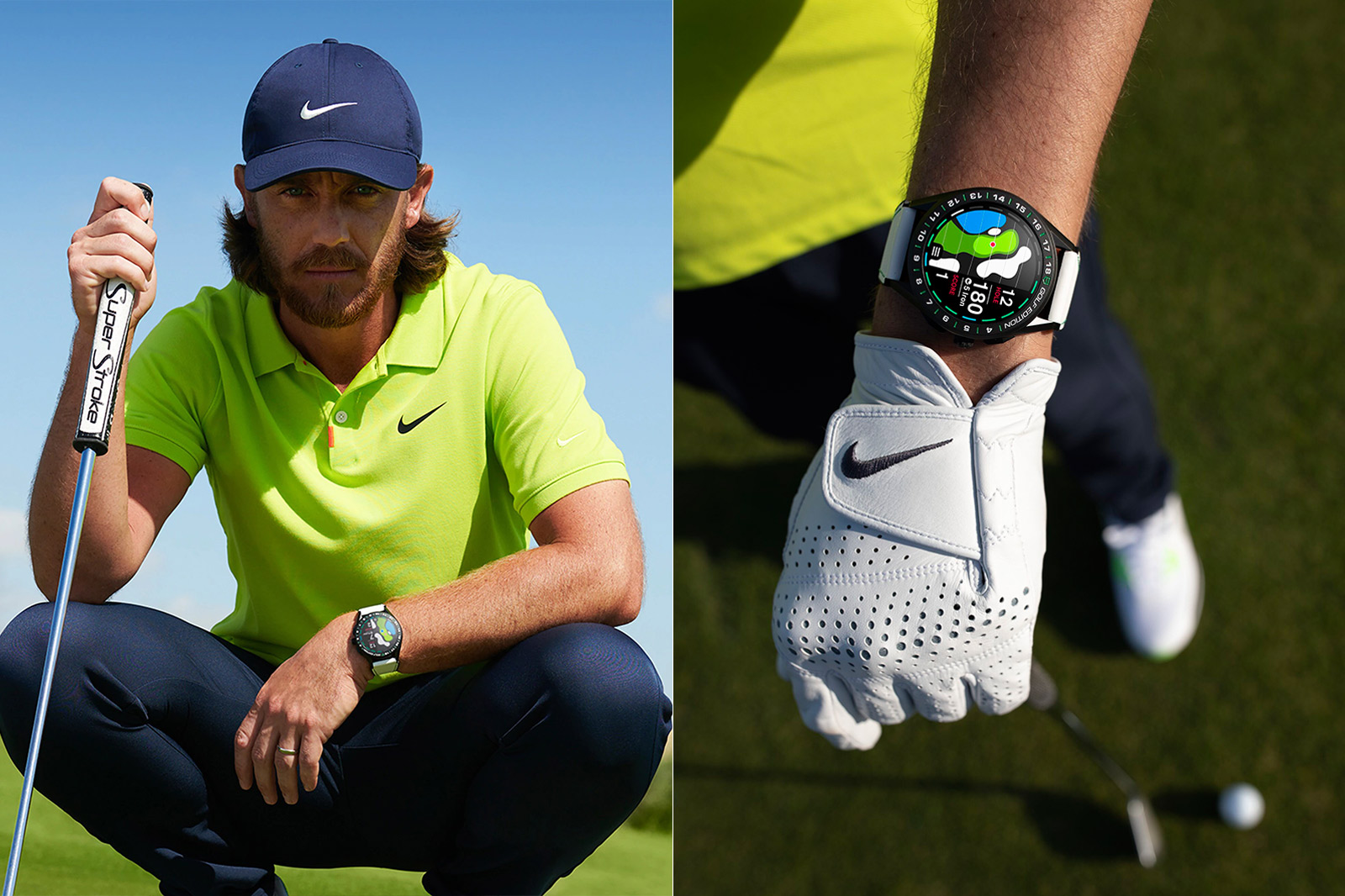 For our next horological hole, the US is represented by Dustin Johnson while Tommy Fleetwood is up for Europe. We had the chance to catch up with Tommy and talk to him about his Tag Heuer Connected Golf Watch earlier this year, which you can read here. As his watch is distinctly golf themed, it makes sense to pair him against Johnson, who also has a golf edition timepiece, although this might be the largest disparity in PGA ranking between players.

As mentioned, we’ve already had an in depth look at the Tag Heuer Connected Golf Edition and it really ticks all the boxes you want a golf watch to. It is of course in a slightly different category to your typical luxury wristwatch because it has a digital display that can monitor your game with course mapping and more. It is perhaps the only watch on this list that you would actually wear during the match and not just to lift the cup at the end. 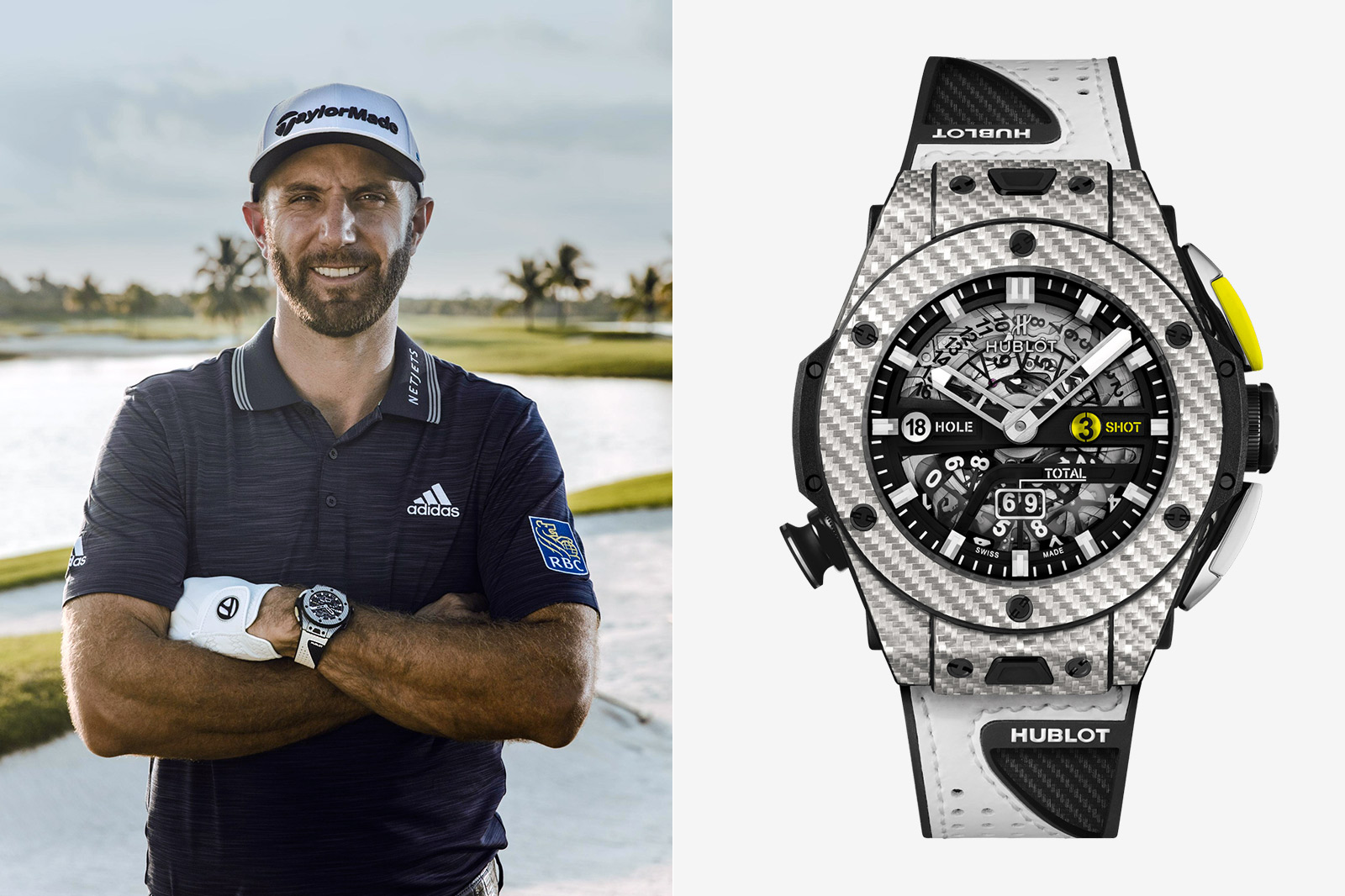 On the opposing wrist is Johnson’s Hublot Big Bang Unico Golf. Stylistically, it has a grey carbon fibre patterned case and bright yellow accents, which is in keeping with Hublot’s typical brash and bold approach. Not exactly elegant or refined and at 45mm it’s massive and will definitely affect your swing should you wear it. Although admittedly the mechanical shot and hole counters are impressive.

When it comes to the scores, the Tag Heuer edges it out over the Hublot but neither are as awesome as the pieces that competed on Hole 1. Bogey for Tommy Fleetwood and a double bogey for Dustin Johnson. 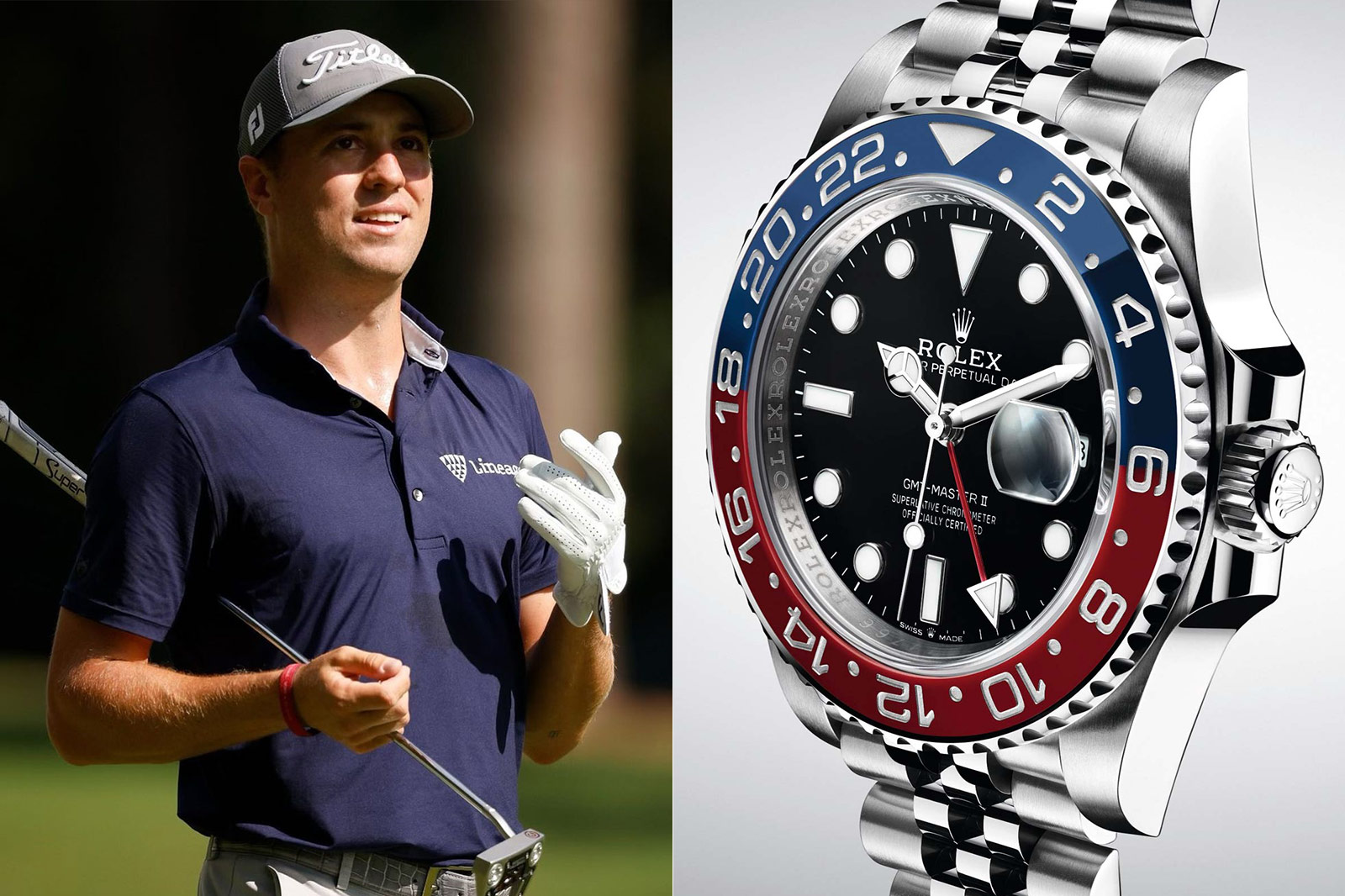 Moving onto hole 3 and Europe have a 2 shot lead over their US rivals but that could all change as Justin Thomas sets foot on the fairway, rank 4 on the PGA tour. Although his opponent is the Spaniard Jon Rahm, the current world number 1.

Enter Rolex. While there are many watchmakers with aspirations to grow in the field of golf, none dominate quite so much as Rolex who have one of the largest rosters of ambassadors in the game. So much so that they find themselves on both sides of the Ryder Cup and pitted against themselves in this head to head. It’s the Rolex GMT Master II vs the Rolex Sky Dweller in the battle of GMT watches. 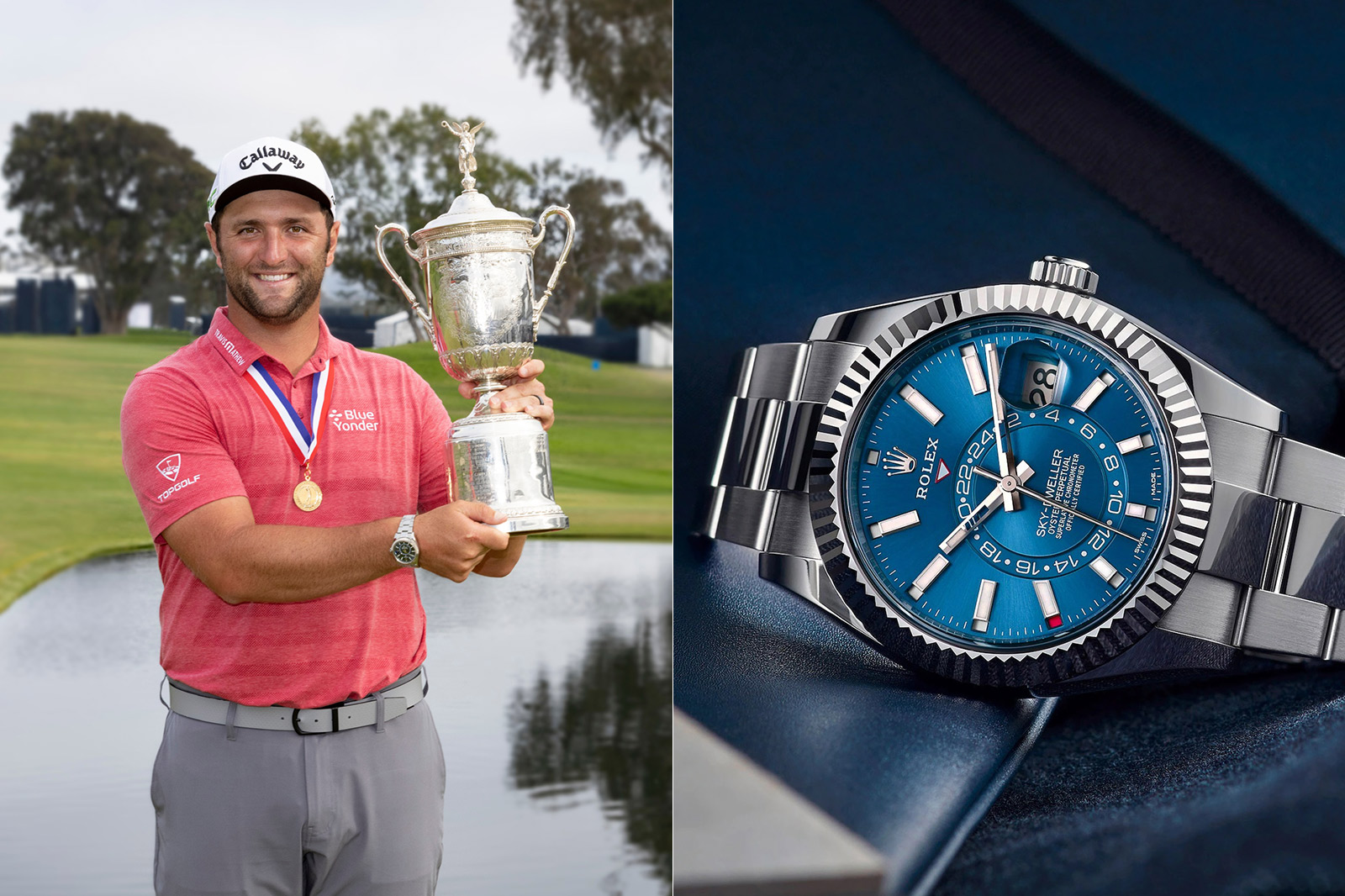 Teeing up first is the Sky Dweller, which is a greatly underappreciated watch. The off-centre 24-hour second time zone ring is one of the most unique designs in the realm of GMT watches. The second time zone features alongside a subtle annual calendar complication consisting of a date window at 3 o’clock below a cyclops lens and a red month indicator that works in conjunction with the hour markers. It’s all controlled by the Rolex manufacture 9001 calibre, which has a 72-hour power reserve and an accuracy of +/-2 seconds per day.

However, while the Sky Dweller is underappreciated, the GMT Master II is rightly lauded as a king among GMTs. Its sporty 40mm Oystersteel case and skindiver aesthetics are excellent and there is likely no rotating bezel as iconic as this. It’s a 24-hour scale with dual colour day/night indicator, giving rise to the cult classic ‘Pepsi’ variant in dark blue and red. Oh, and Justin Thomas has that most coveted version, and fortunately for him it’s on the Oyster bracelet, because while it is available on Jubilee that would have cost him a stroke.

The Sky Dweller scores a deserved par but the GMT Master II Pepsi has to be a hole in one for an eagle. 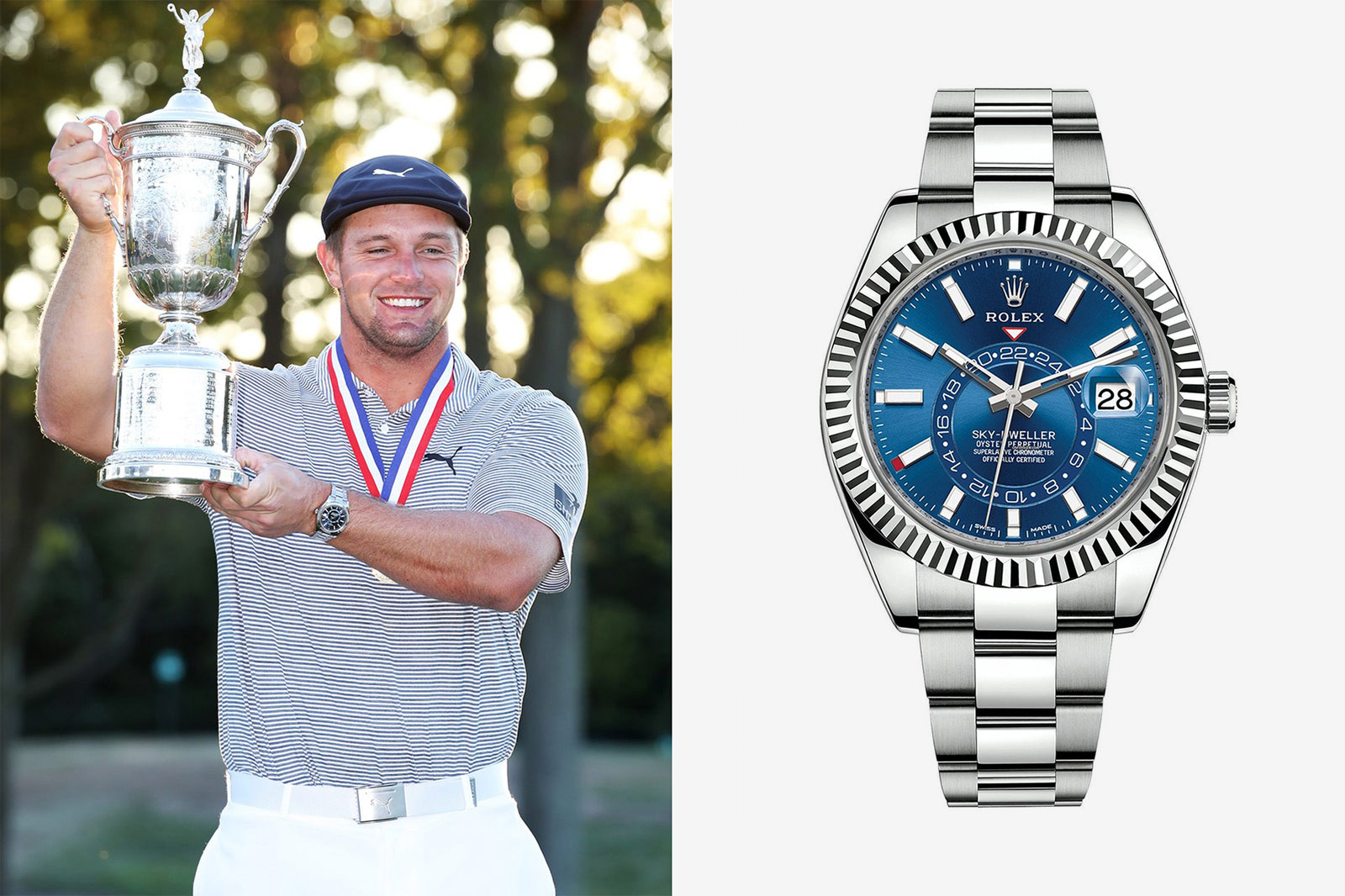 With both teams tied heading to the fourth hole, who will triumph out of the big-hitter Bryson DeChambeau and veteran Sergio Garcia? At 41, Garcia is one of the oldest competitors at the event and is the all-time best performing European player in the Ryder cup, and in that time has curated one of the most varied and versatile watch collections of any player, showcasing a passion for horology that expands beyond sponsorships.

We’ve chosen to highlight Garcia’s Omega Planet Ocean 600m, because it provides a nautical foil to DeChambeau’s Rolex Sky Dweller. That’s right, another Sky Dweller, this time swinging for the US team. During my research into the Ryder cup players, I was pleasantly surprised that the Sky Dweller was the second most popular timepiece after the Rolex Daytona (spoilers, one of those features in our final match up.)

When it comes to specs, DeChambeau’s Sky Dweller is identical to Jon Rahm’s because they’re the same white rolesor with blue dial model. Which just goes to show how successful it is as a design for international travel as golfers spend a lot of time globe-trotting around the best courses in the world. 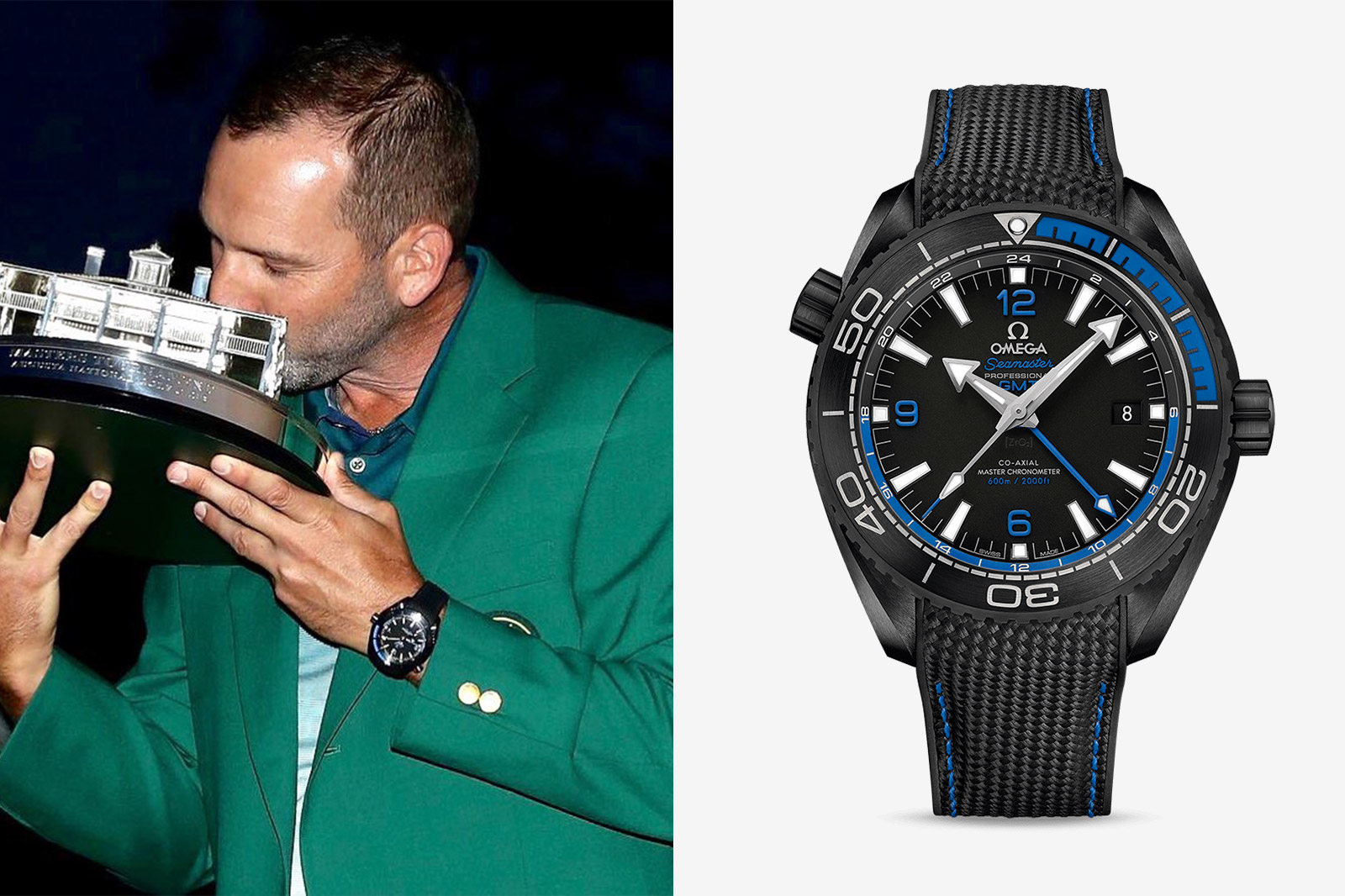 But if the Sky Dweller is comfortable on a plane, as its name indicates, then the Planet Ocean 600m absolutely lives for the water. At 45.5mm, the case is the definition of modern size creep, but it also means there is a lot of watch on offer. He owns the GMT version in black and blue, but his other in Omega’s signature Senda gold transforms it from a sporty, professional diver into a luxurious behemoth, without compromising on its 600m water resistance or the master chronometer chronograph movement inside. With this on the course, you don’t have to worry about water traps. 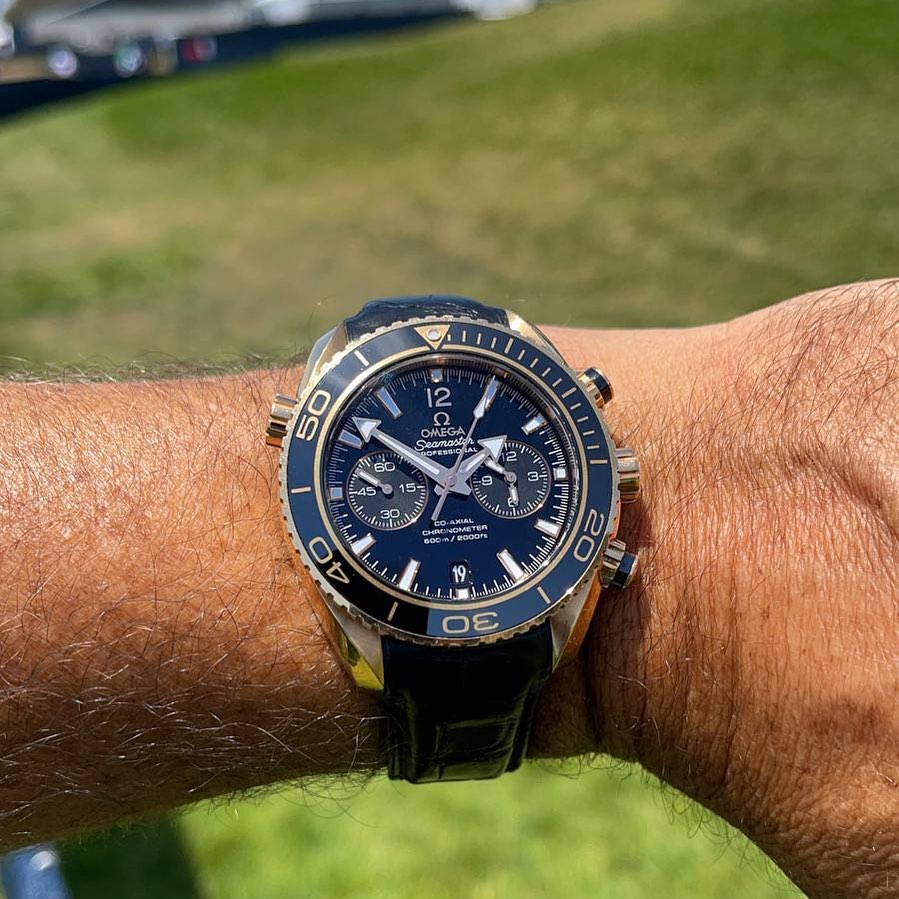 It’s another close hole, but looking at Whistling Straits hole 4, which is right on the shoreline of Lake Michigan, the water resistance of the Omega gives it a slight advantage. Birdie for the Planet Ocean and another par for the Sky Dweller. 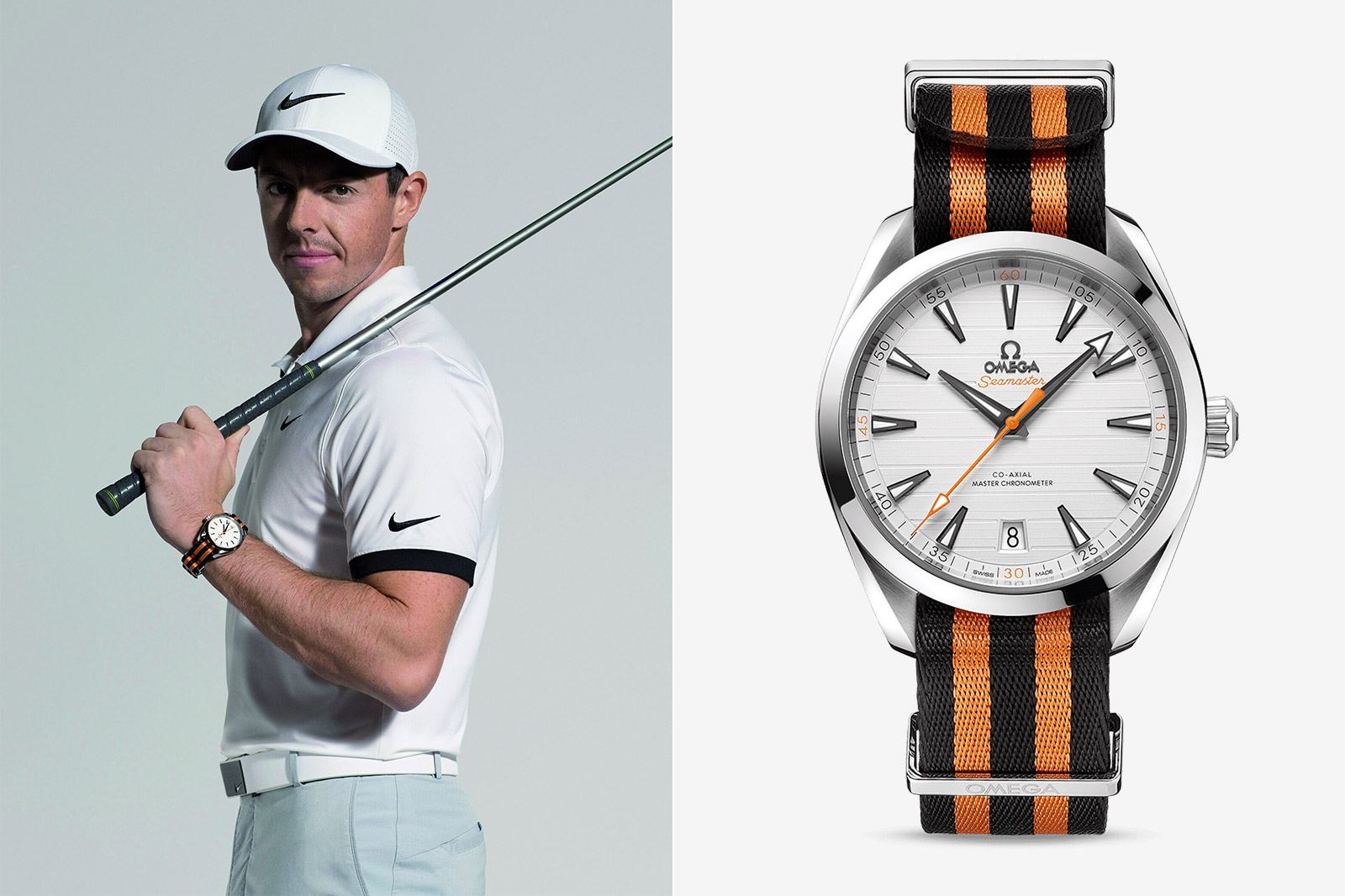 Heading onto the final hole in our short tournament, we have Brooks Koepka for the USA and Rory McIlroy for Europe. McIlroy is without a doubt the greatest British player in recent years, a true hero of the sport. And on the theme of big names, both player’s watches are style icons that have proved themselves time and time again.

For Europe, the Omega Seamaster Aqua Terra Golf and for America the Rolex Daytona. Both are classic watches that are at the pinnacle of style and poise. All I need to say is Paul Newman and that should silence anyone who disagrees about the prestige of a Daytona.

Unlike the golf editions we saw on Hole 2, the Aqua Terra Golf Edition keeps things classy, with no overt references to the sport. It has an elegant steel case in a sweeping shape that is a fusion between dress watch and diver. It isn’t as extreme as the Planet Ocean but that makes it far more versatile and suitable for the clubhouse and at 41mm, is far more subtle. Of the two versions available, McIlroy has the white dial one with black and orange NATO strap, which adds a sporty flair to the design. Plus, it has a great master chronometer movement with a 60-hour power reserve, because you know, Omega. 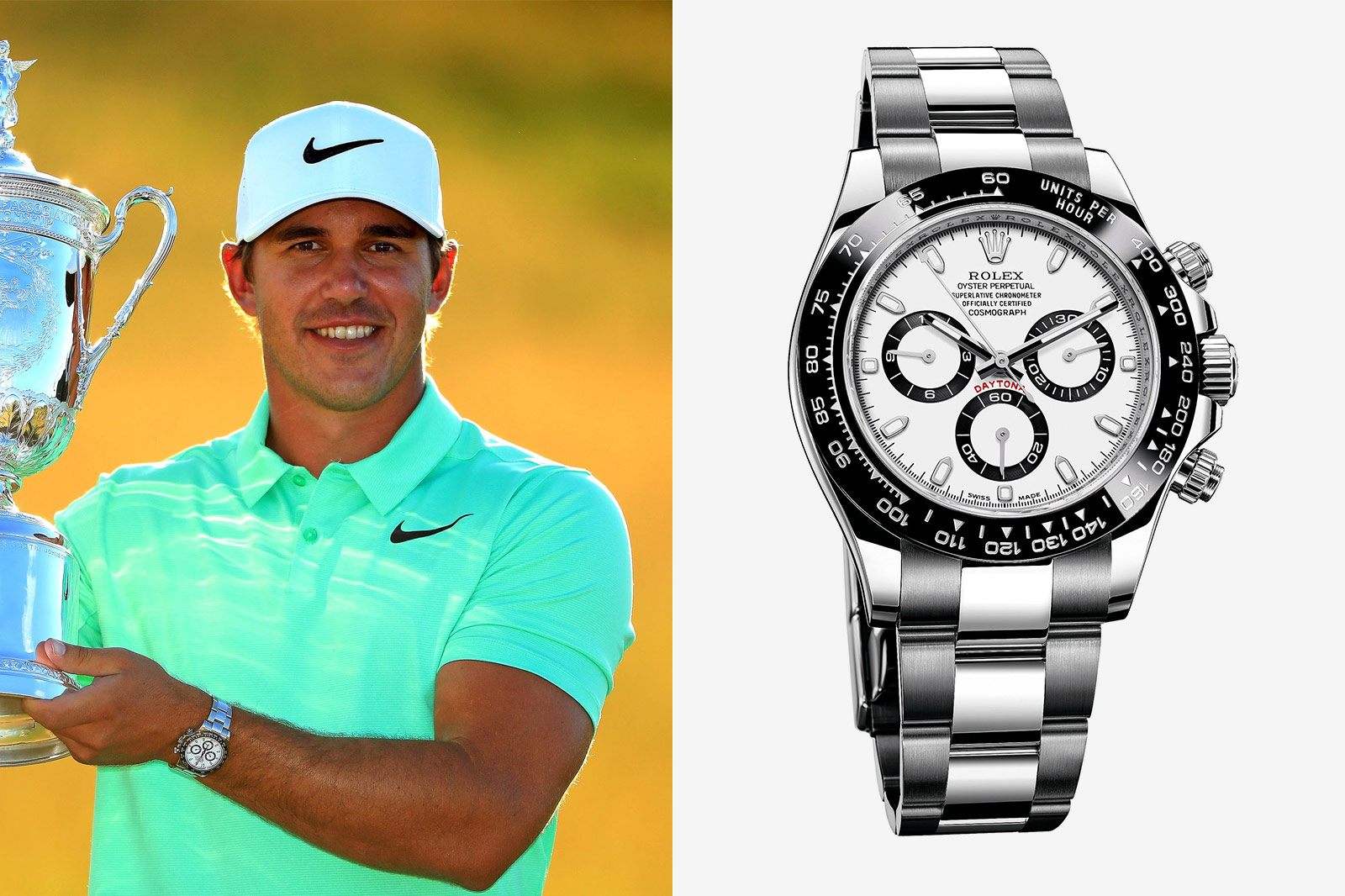 Finally, the Rolex Cosmograph Daytona. Practically every player on this list who owns a Rolex has a Daytona in addition to any other watches, that’s how popular this watch is. Koepka has a monochrome version with a white dial, black bezel and black rings around the tricompax subdials. Unfortunately for Koepka, it isn’t the ‘Paul Newman’ Daytona, which is the most sought after so that will cost him a stroke. The Rolex is also a sight more expensive than the steel Aqua Terra at a price of £10,500, but that just feeds into its prestige and ‘cool guy’ character. It might not be a golf edition, but it is certainly THE golfer’s watch.

As much as it pains me as a Brit to put Rory McIlroy’s watch second in this case, the sheer class of the Daytona wins out. Leading to par for Koepka and a bogey for McIlroy.

Well, after a close fought horological competition, Europe take it. Now it just remains to see who will raise the actual trophy at the end of the weekend, which is probably a lot more important than our hypothetical game. If you enjoyed this article, check out The European Championship of Watchmaking.