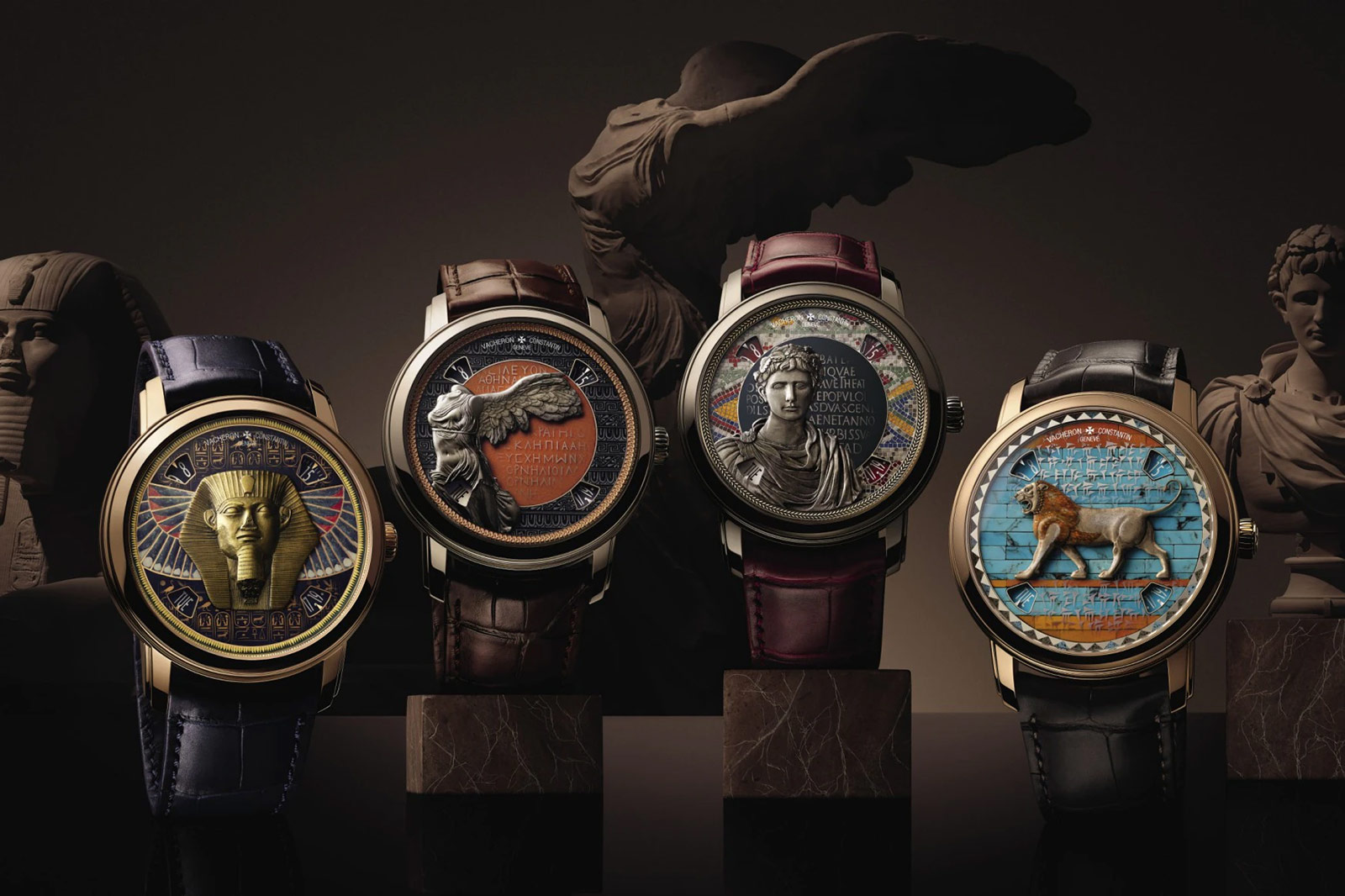 In 2019 Vacheron Constantin and the Louvre Museum in France announced a partnership aimed at exploring the cultural history and artisanship of beautiful objects in new forms. A lofty aim to be sure, but one that’s well within the remit of one of the most prestigious Swiss watchmakers. As demonstrated by the new Métiers d’Art – Tribute to Great Civilisations collection that highlight artwork from Egypt, Persia, Greece and Rome.

The four watches – each limited to five pieces – that make up the limited edition collection are structurally and mechanically similar but with vastly different dial designs. 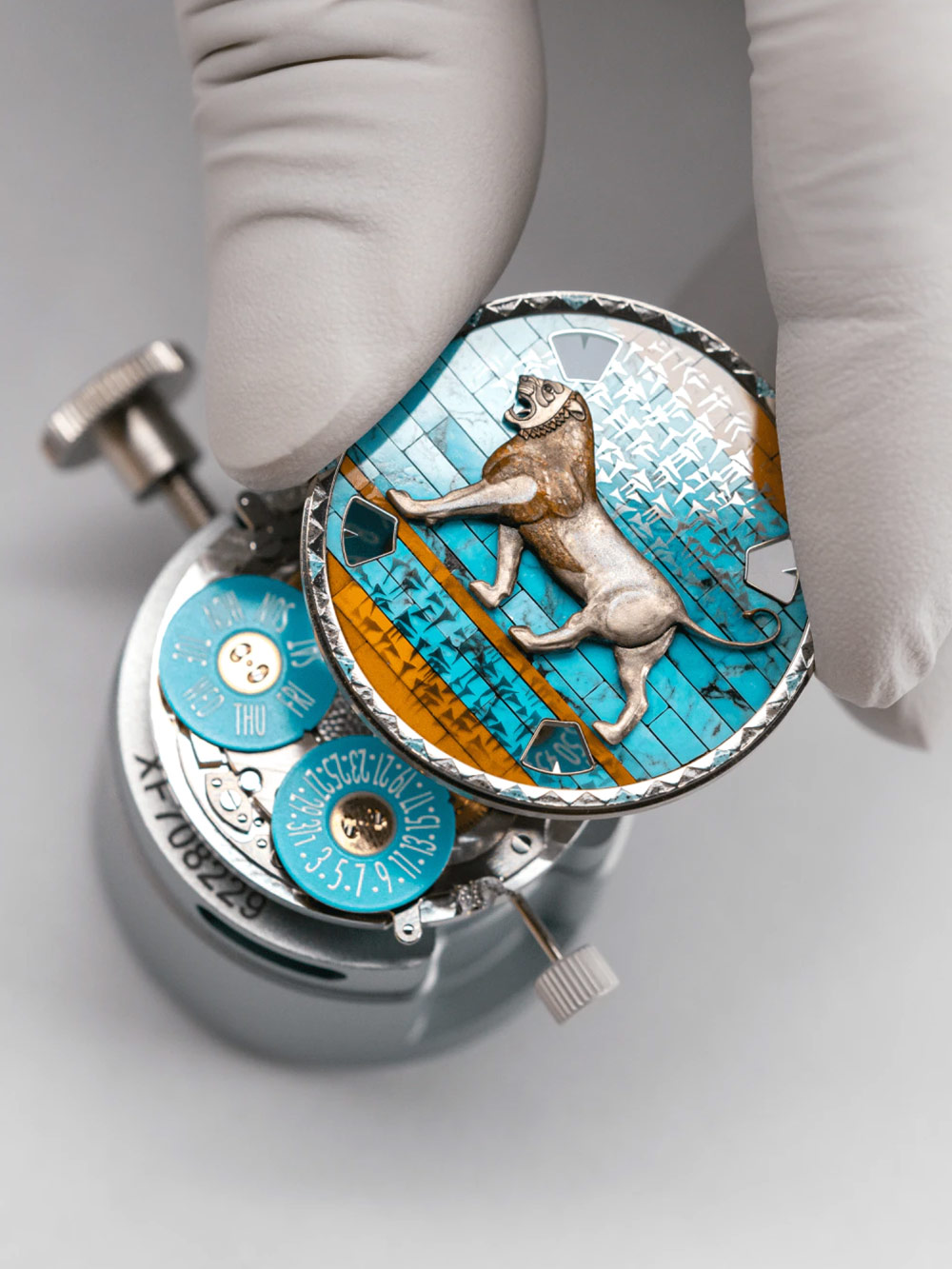 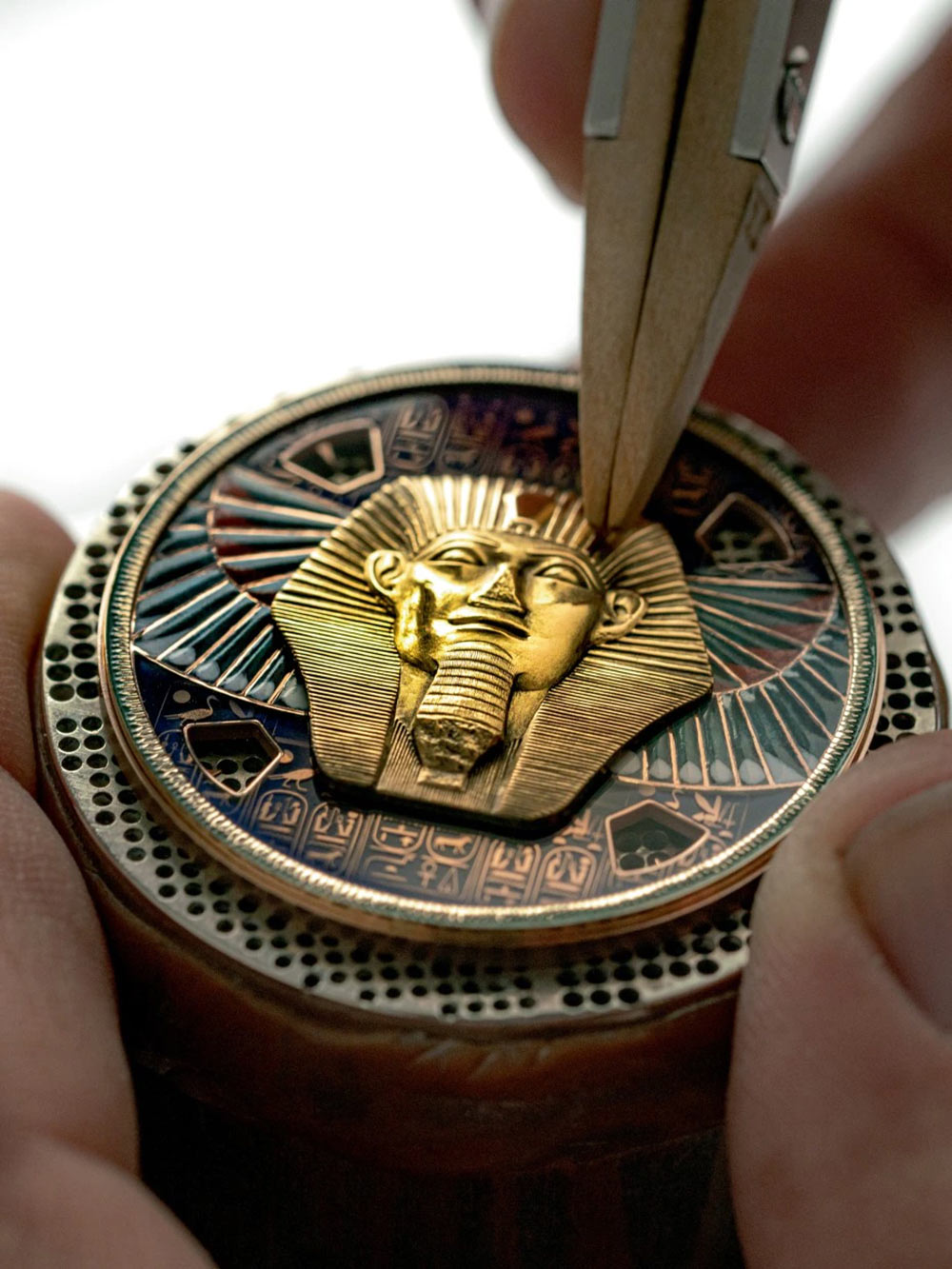 Each features a 42mm white or pink gold case housing the 2460 G4 movement. It’s their standard Métiers d’Art combination that we’ve seen several times already, including earlier this year for Chinese New Year, which makes sense because the handless display of hours, minutes, days and date leaves plenty of space for artwork.

In terms of the artwork’s structure, that also follows a similar formula: a foregrounded Louvre exhibit against a Métiers d’Art backdrop and a different Métiers d’Art periphery. The final element that’s the same on all four is the engraving of the Louvre found on the automatic rotor visible through the exhibition casebacks. Now though, it’s time to delve into the gorgeous artwork on each individual piece. 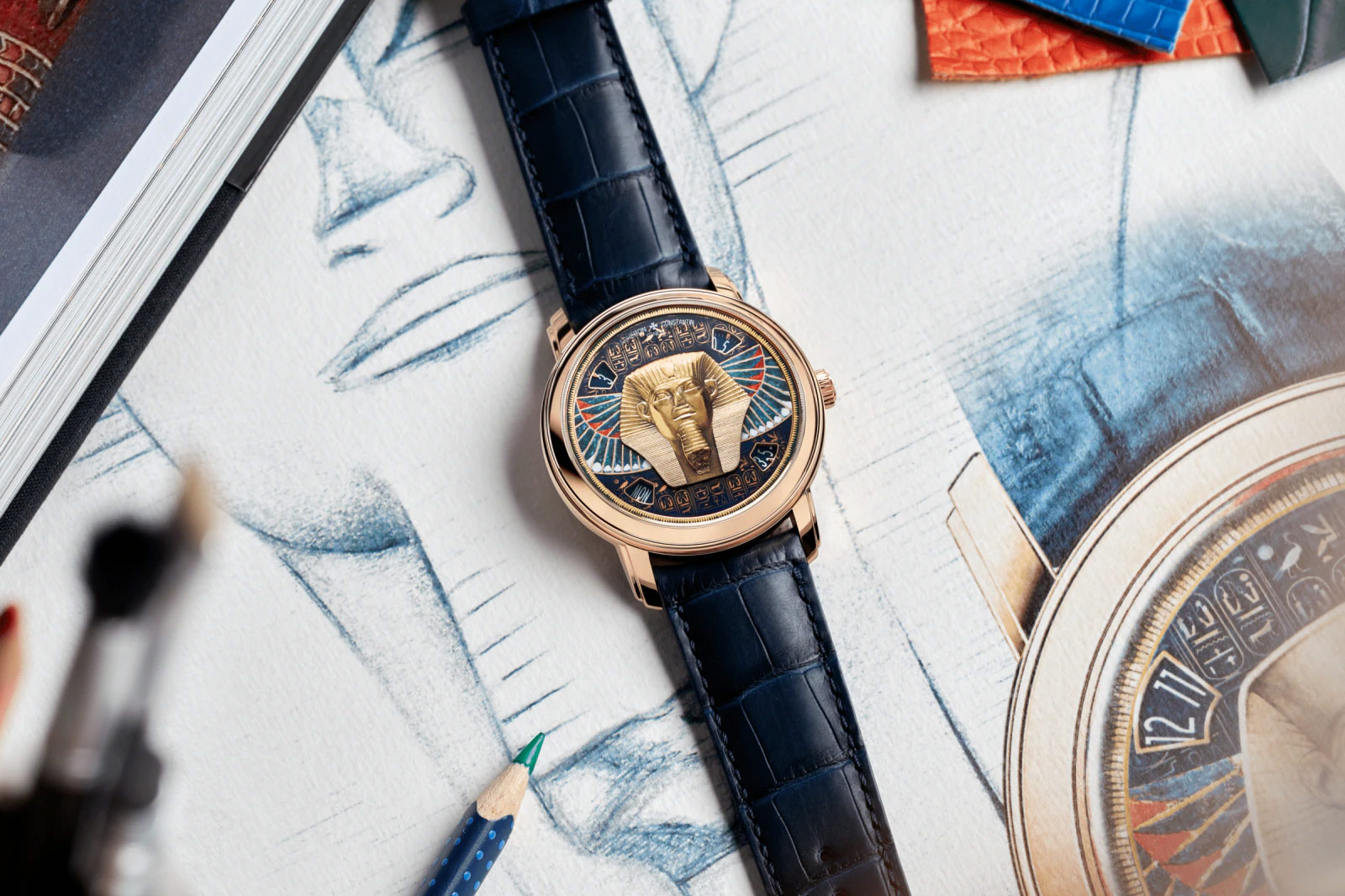 The Grand Sphinx de Tanis is the largest sphinx statue preserved outside of Egypt itself and like all the artworks here, it’s on display in the Louvre. Its history is still being debated by historians with the prevailing theory at the moment being that it dates to the Middle Kingdoms, around 2035 1680BC. This period is considered the Golden Age of Egypt. Golden being the apt word because the Vacheron Constantin Tribute prominently displays a gold engraving of the Sphinx’s face set against a backdrop of period ornamentation. 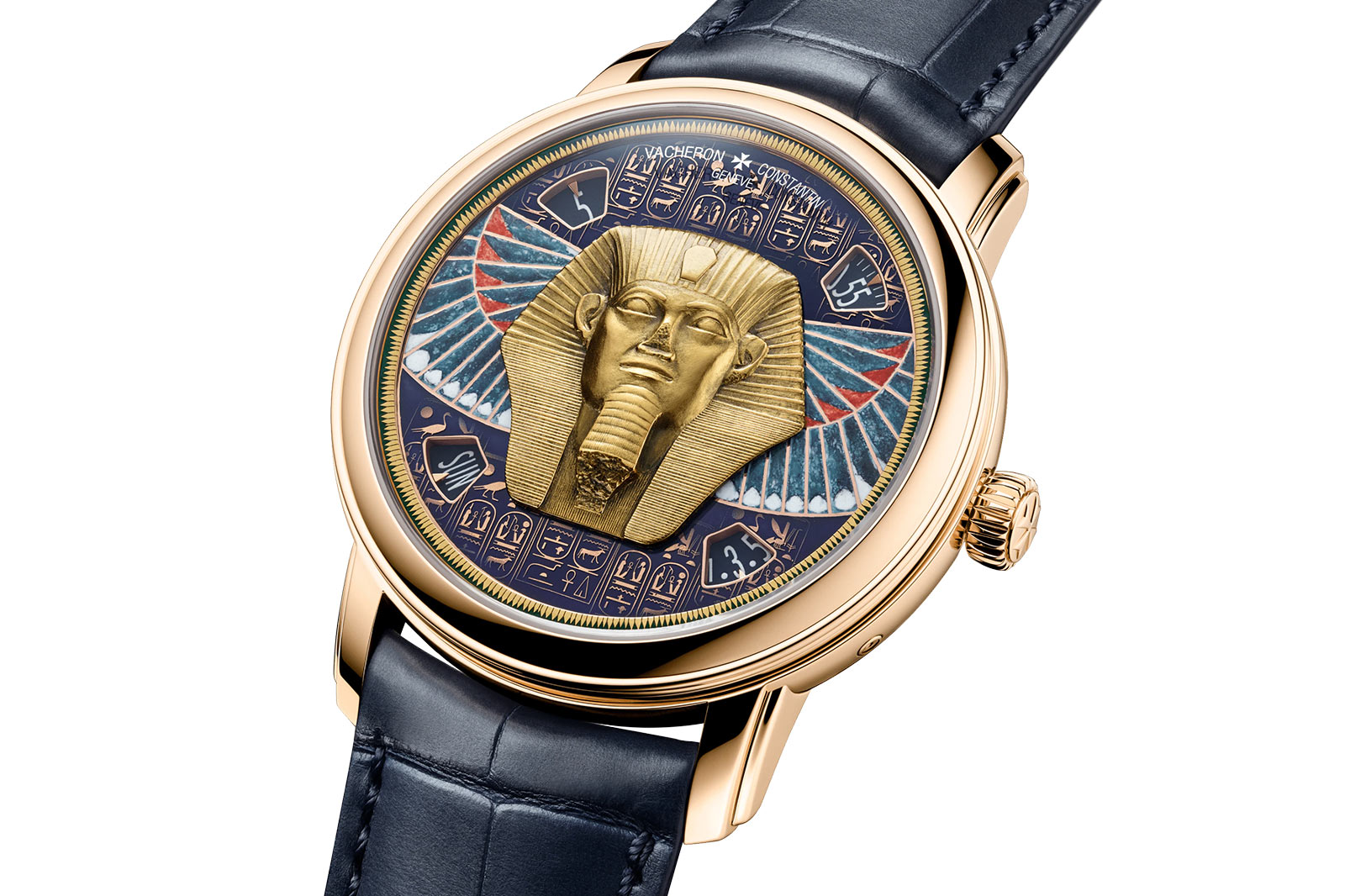 That backdrop is made from Champlevé enamel with decorations inspired by the coffin of Nakht khonsou irou, sigils and icons of warding for the afterlife. Both the applied statuette of the Sphinx and the enamel dial are immensely beautiful and the precision required to achieve such detail within a 40mm diameter dial is inconceivable. 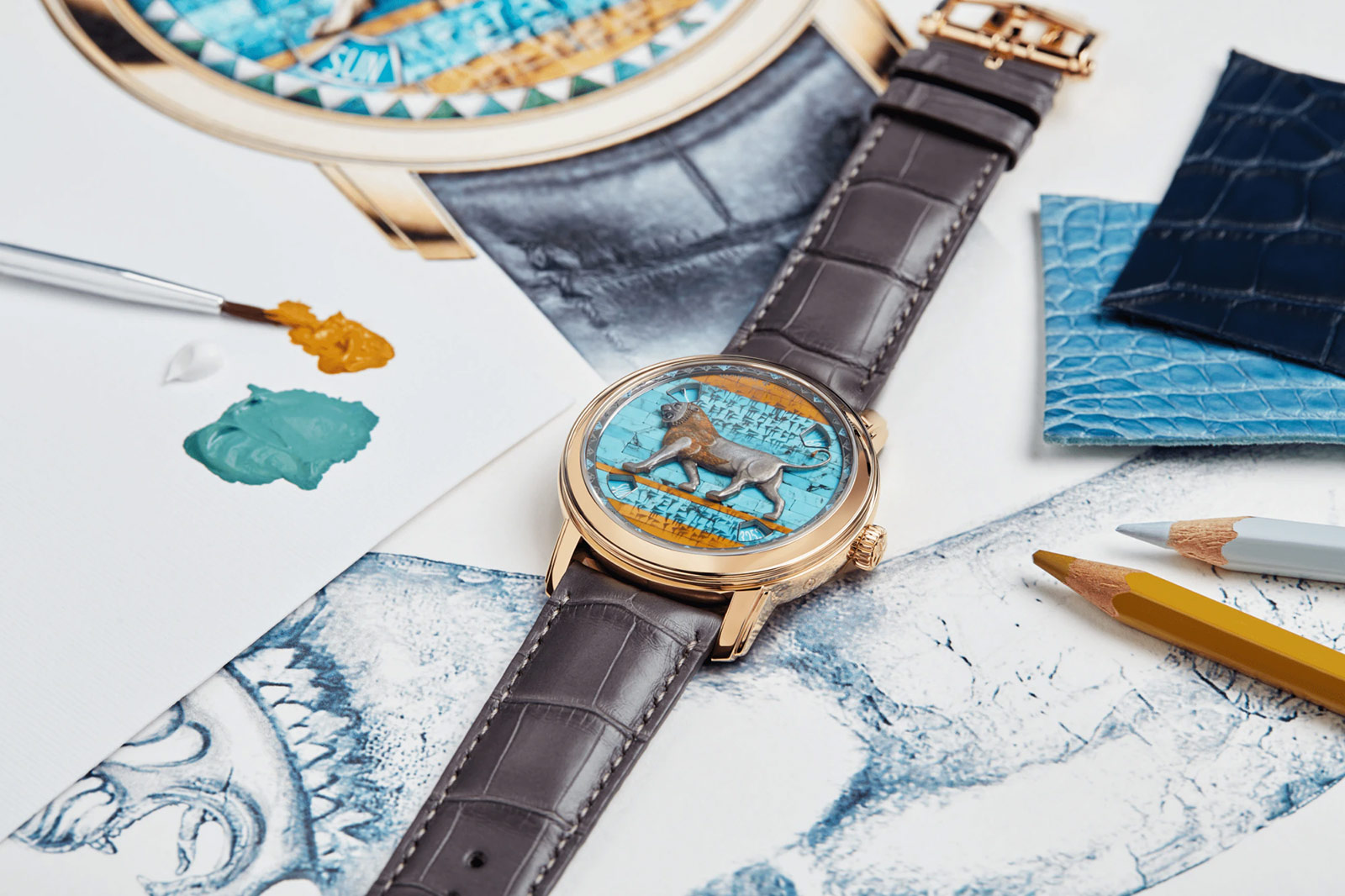 Darius was one of the greatest rulers of all time conquering the area from modern day Pakistan to the Black Sea. However, his name perhaps isn’t as recognised in the west as his expansion towards the Mediterranean was halted by the Greeks at Marathon. For the timepiece honouring him, Vacheron Constantin have reproduced a marquetery form of a frieze lion from the Palace of Darius in his capital of Susa, in modern day Iran. 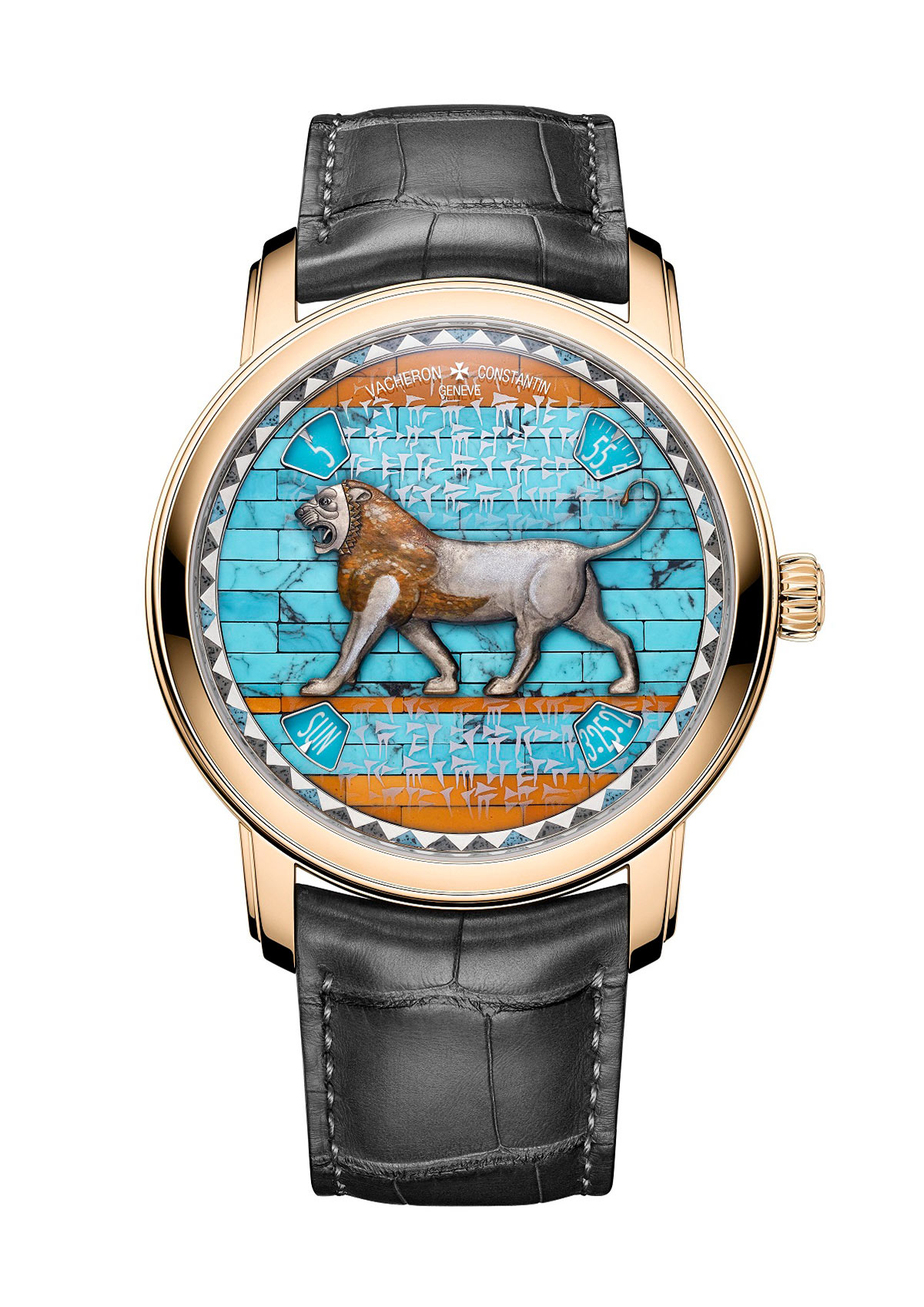 In fitting with the fact the original artwork is a frieze, the watch features a wall as its backdrop made from genuine stone fragments, the bright colours of which make this one of the most eye catching of the four. There are also enamel elements around the periphery of the dial inspired by a separate frieze. The cuniform text that is displayed is a replica of that written by Darius himself and is a charter for his palace. 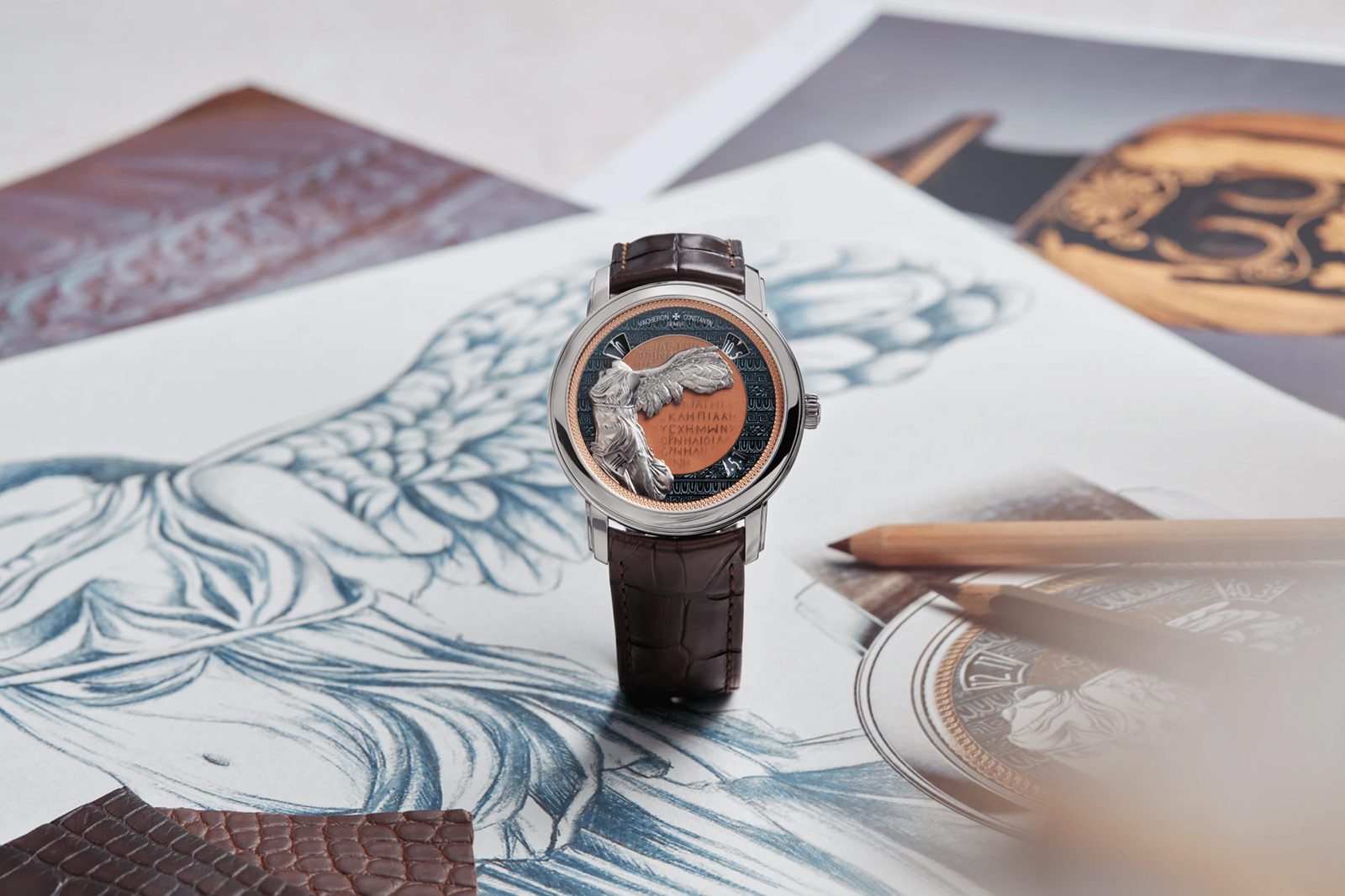 For the third timepiece, Vacheron Constantin have turned to the Hellenistic period of Greek history with the statue of the Goddess Victory from Samothrace. Victory, also known as Nike, was a member of the expansive Greek pantheon alongside the iconic Olympian gods. It’s believed that the Victoire de Samothrace was created to commemorate an important naval victory for Greece since the goddess is depicted standing on the prow of a ship and the statue was found in a temple complex on the island of Samothrace in the North Aegean, an area of many significant naval battles. 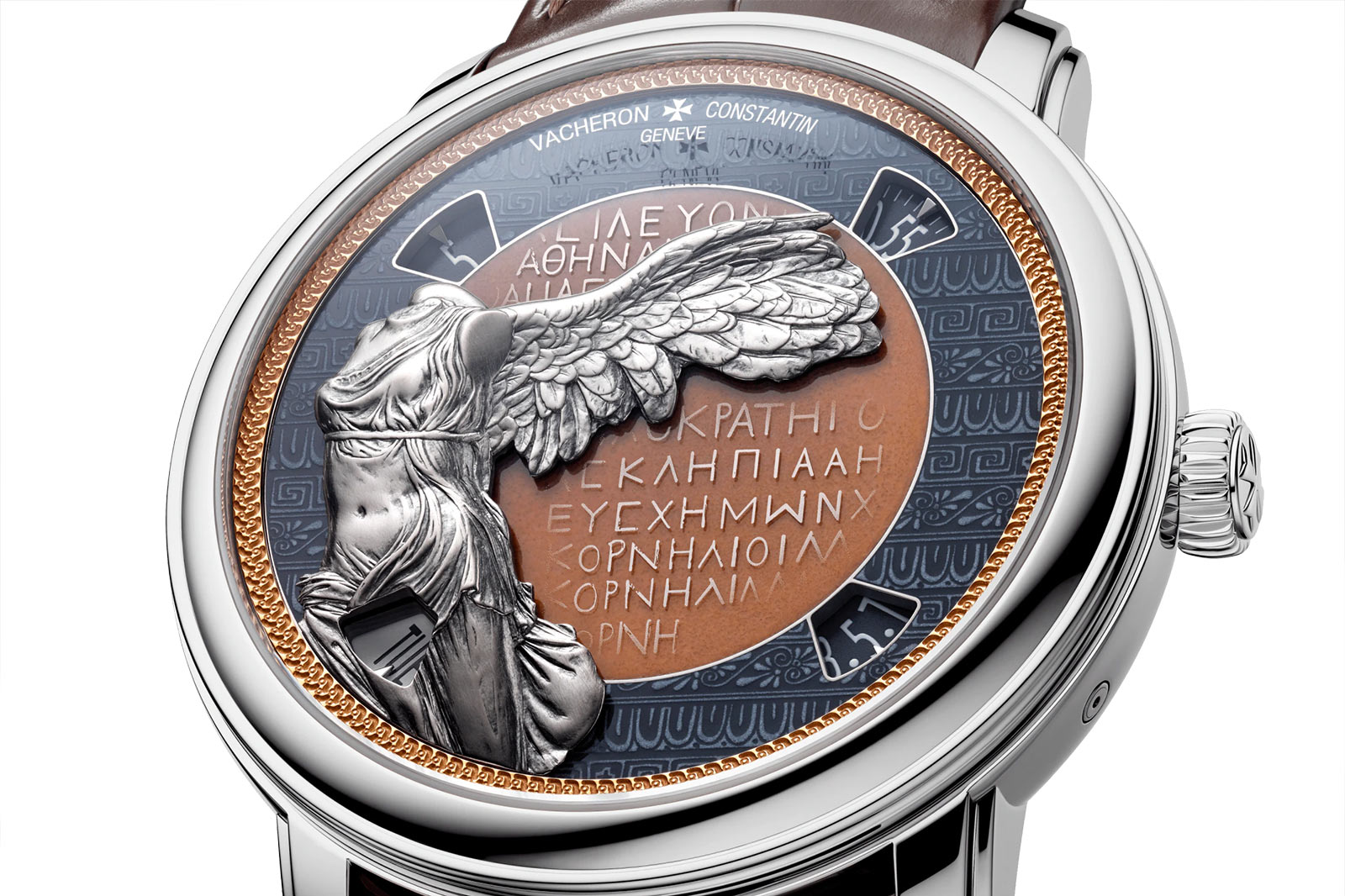 In terms of the watch, the statue is presented as a white gold engraving that mimics the artistry of the original sculpture. Creating the impression of flowing cloth across the body is incredibly difficult to produce and required utter mastery of multiple artisan skills from Vacheron. The base of the dial is likewise difficult, featuring multiple types of enamel including brown Champlevé and blue Grisaille enamel. The contrasting colours and materials present on this timepiece combined with the mythological subject matter makes it my personal favourite. 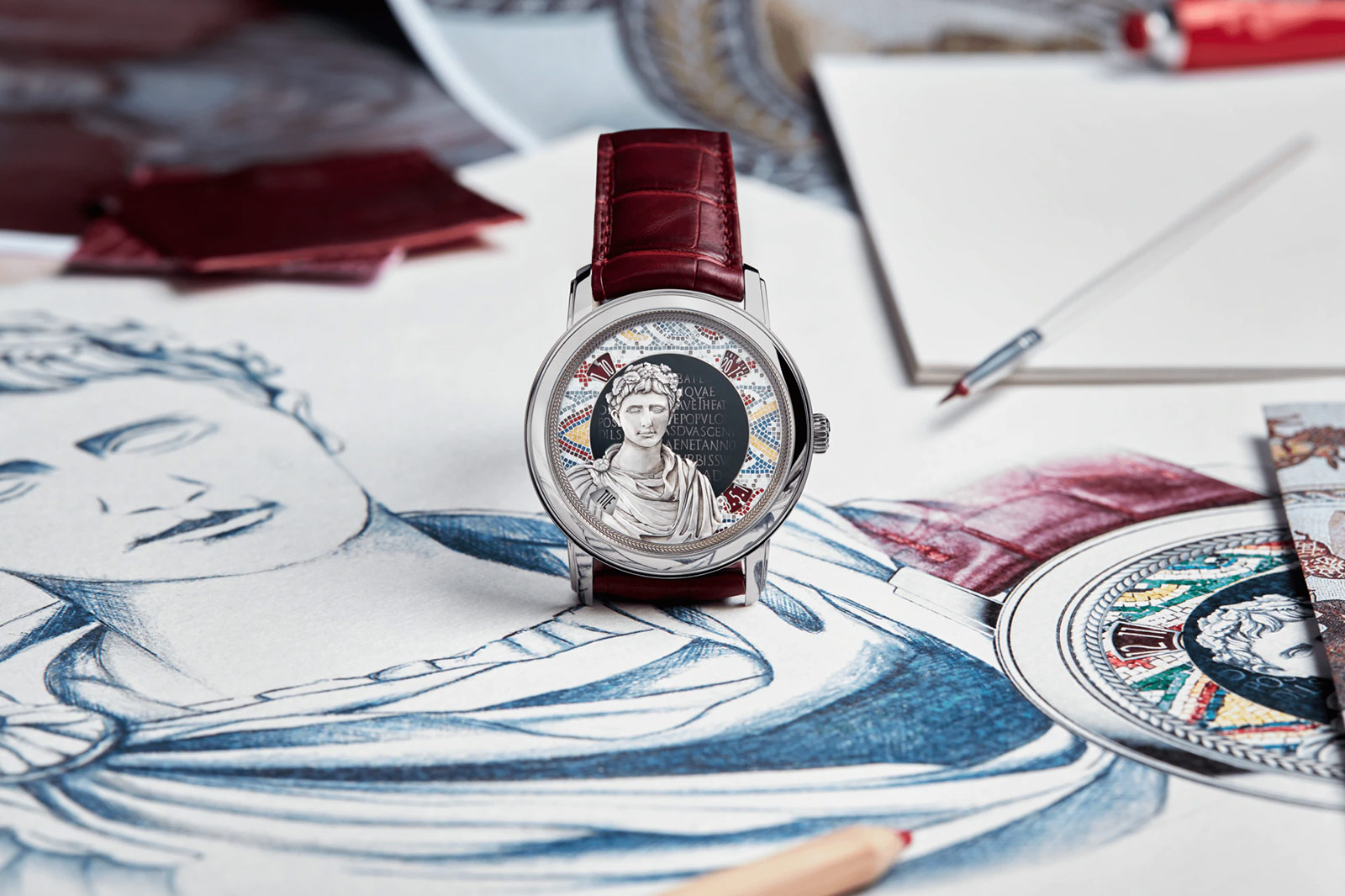 Lastly, we have the Roman Empire, the most recent historical civilisation commemorated in this collection, albeit one that’s still over 2000 years old. The Bust of Augustus at the Louvre depicts him in his fifties at the time when he was the first Emperor of Rome following his ascension to that position in his thirties after defeating several rebellions by the likes of Marc Anthony. 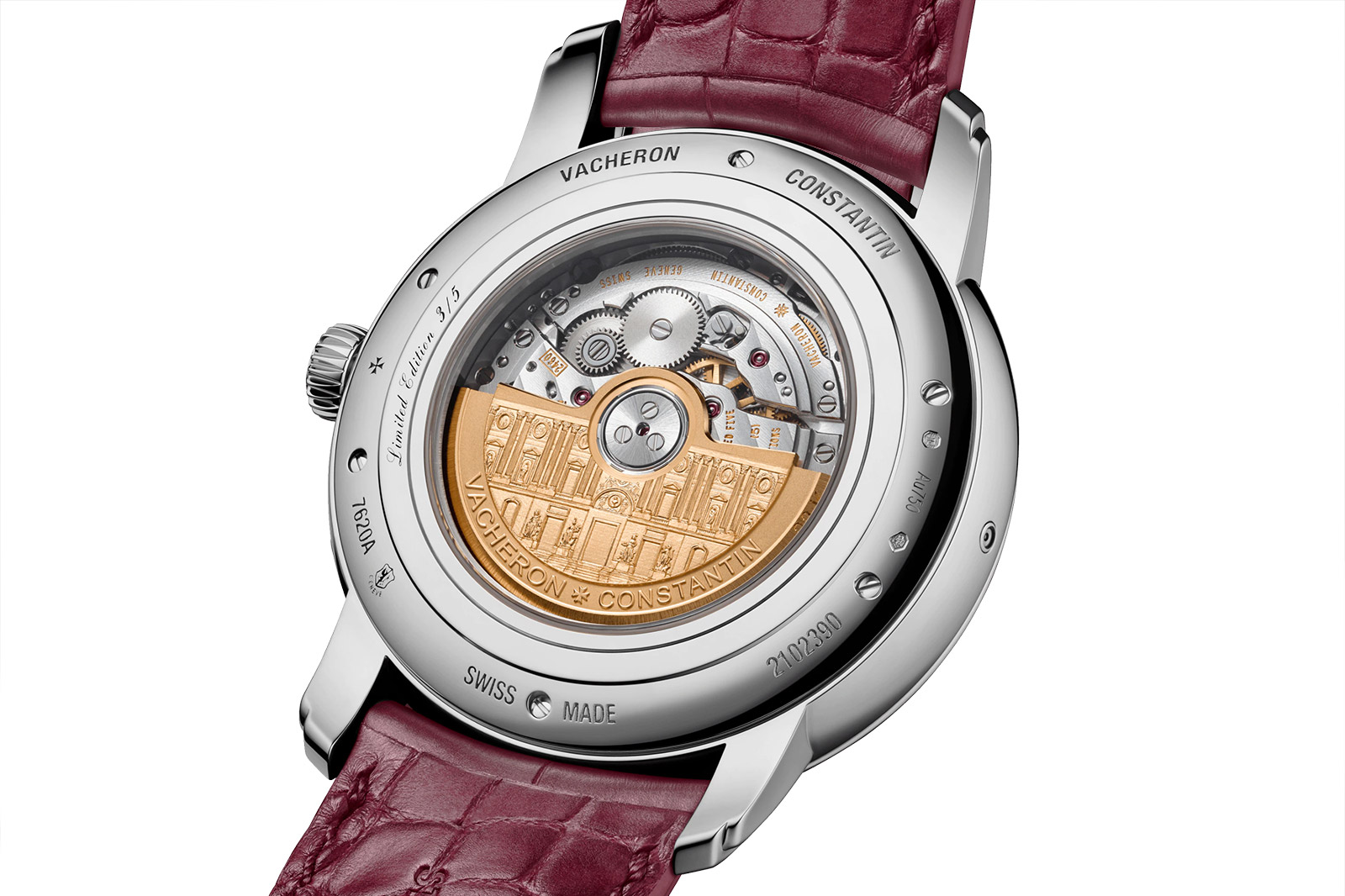 This is the most meticulous of the four watches as it required creating a micro mosaic on top of a Grand Feu enamel dial. If any mistakes at all were made in the mosaic process then the entire dial would need to be remade from scratch. That means perfect placement of all 660 stones which are made from seven different types of stone with their own properties. A feat that had to be replicated five times to produce the five limited editions. And to think I don’t have the patience to finish a jigsaw.