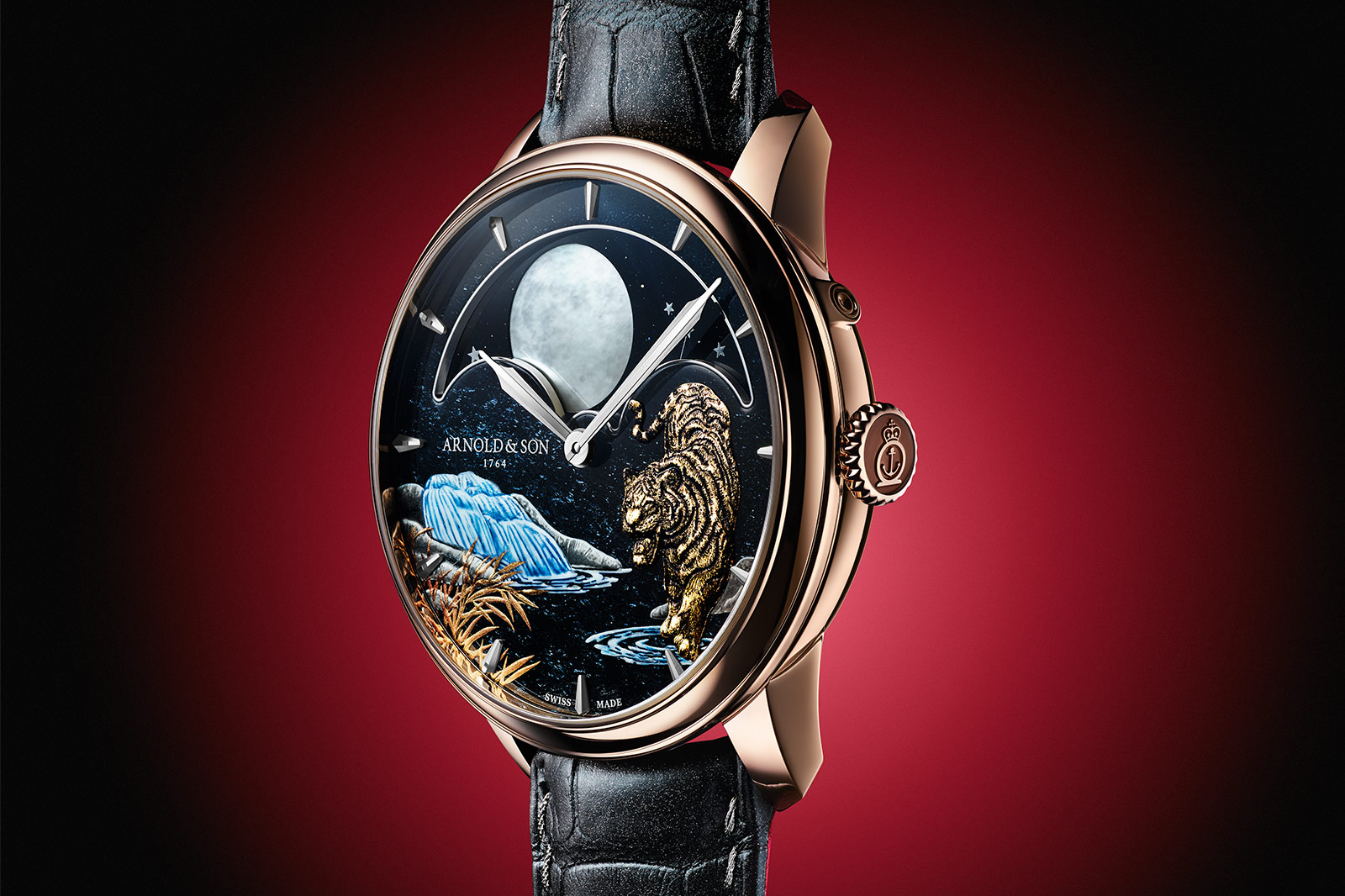 February 1st, marks the beginning of the Chinese New Year, with the zodiac tipping over to the year of the Tiger, after the year of the Ox. On a personal note, I was born in a year of the Tiger and throughout my childhood tigers were my favourite animal, so I’ve actually been quite looking forward to seeing how watchmakers will interpret the animal in horological form.

China is a huge market for watches of all varieties, making the Lunar New Year an unmissable opportunity for watchmakers. As such, they’ve been announcing their tiger themed timepieces over the past month or two and with the New Year upon us, it’s finally time for a round up 10 of the best year of the Tiger wristwatches. 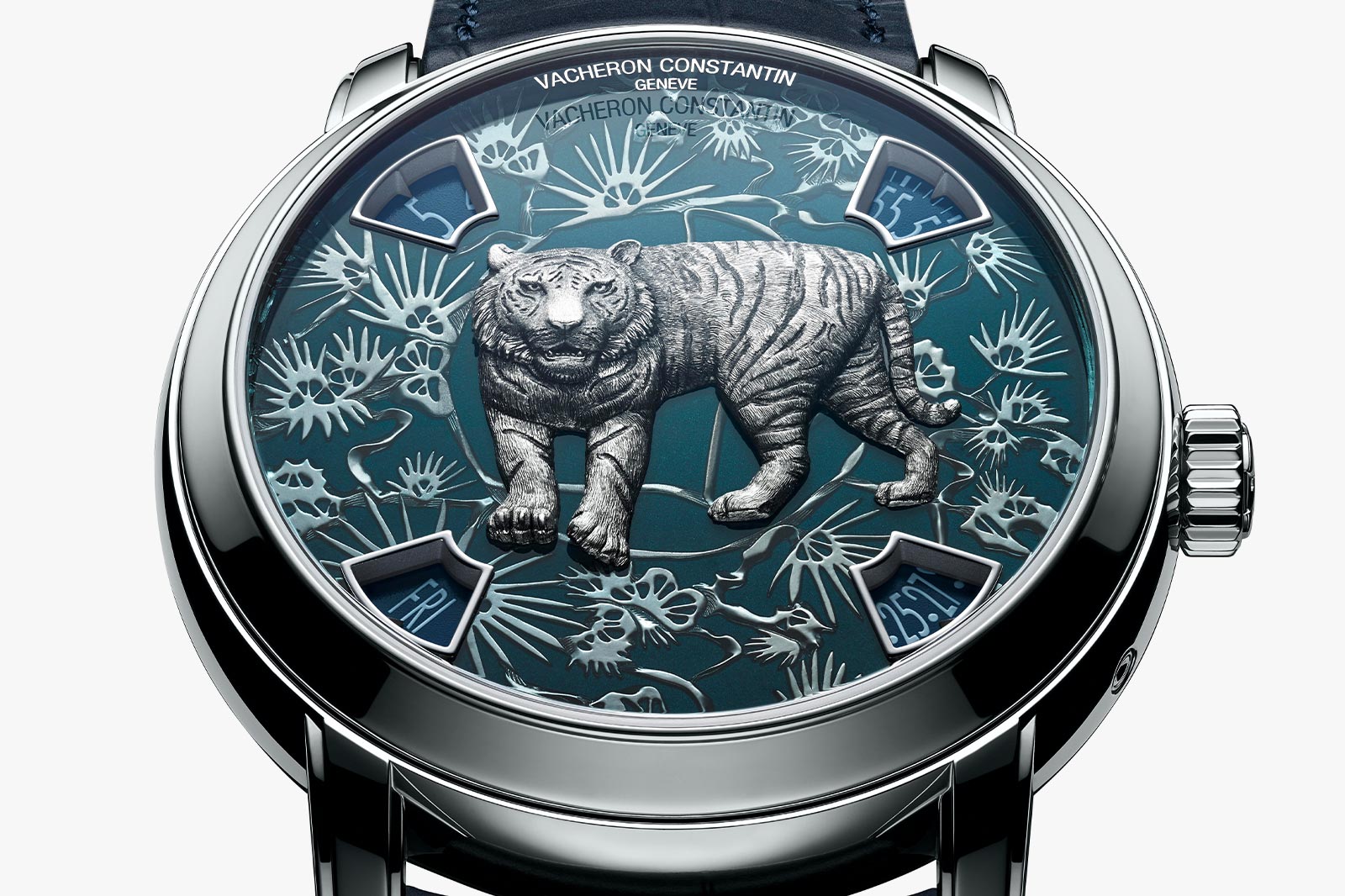 Coming out swinging are Vacheron Constantin, who have created the Métiers d’Art The Legend of the Chinese Zodiac Year of the Tiger. It’s available in either platinum or rose gold with complimentary dial colours and features a large, engraved tiger on top of a grand feu enamel dial etched with vegetation. It’s both mesmerising and intimidating, just a tiger should be, especially in 2022 when it symbolises braveness and competitiveness. 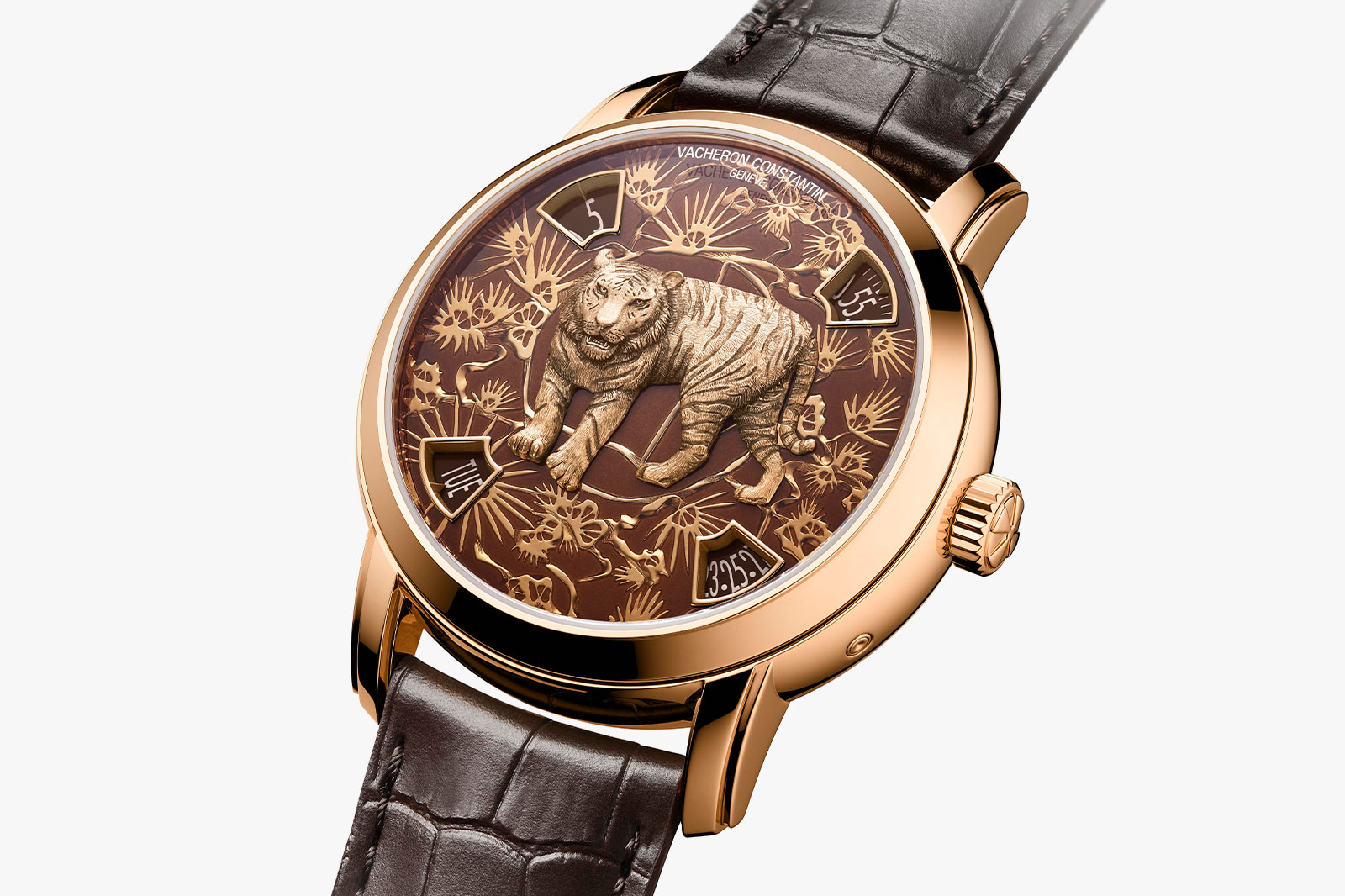 Inside it houses the calibre 2460 G4, featuring a hands free time display of hours, minutes, days and date in the four quadrants of the watch. The hands free method of timekeeping allows the tiger to be literally and figuratively front and centre.

Piaget Altiplano Year of the Tiger 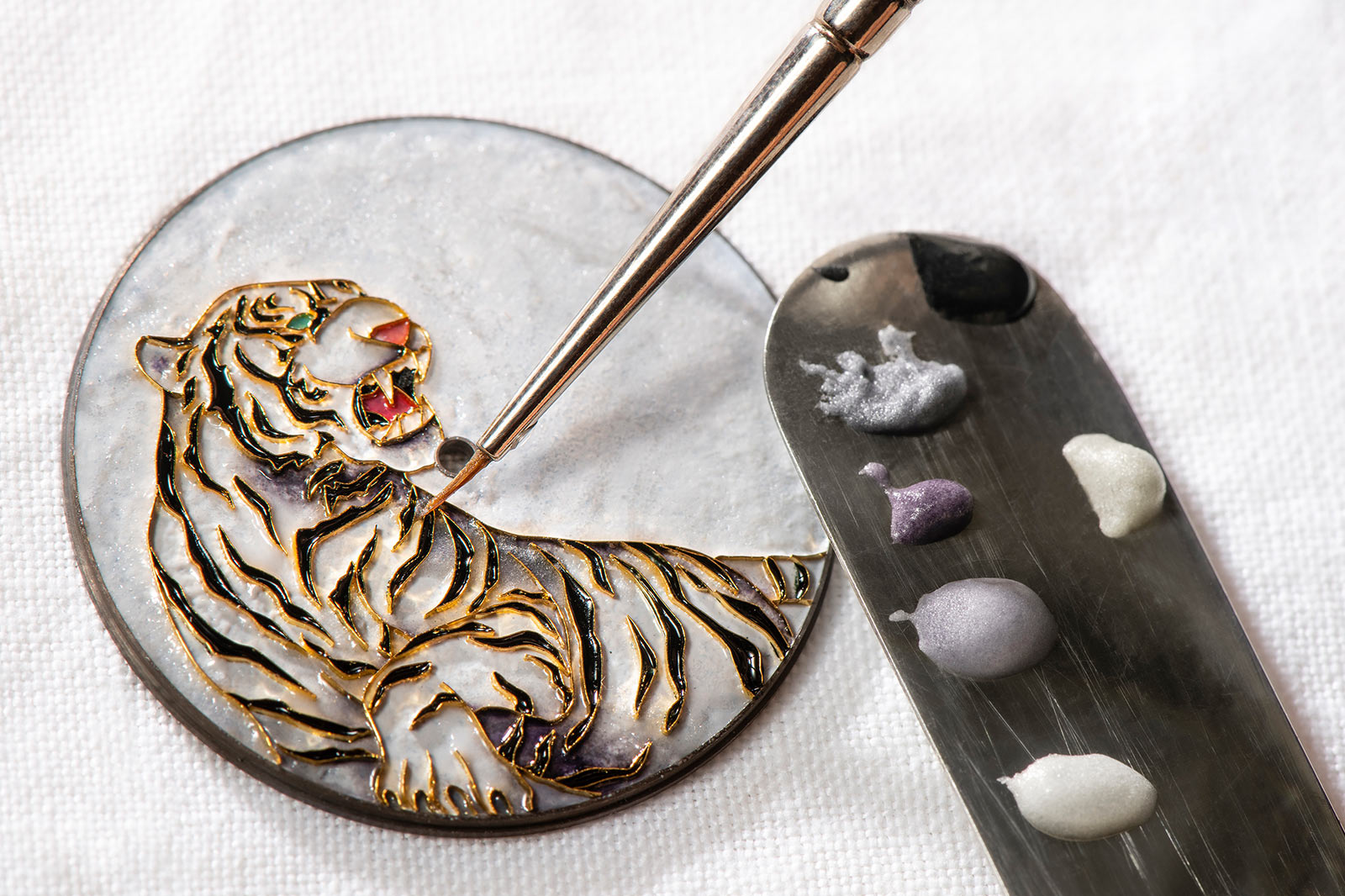 Piaget have focussed on their grand feu enamel skills with an absolutely gorgeous rendition of a tiger in the cloisonné style. Cloisonné is a method that involves using extremely thin gold wire to define areas of the enamel dial and separate different colours, creating a golden highlight on the image of the tiger. 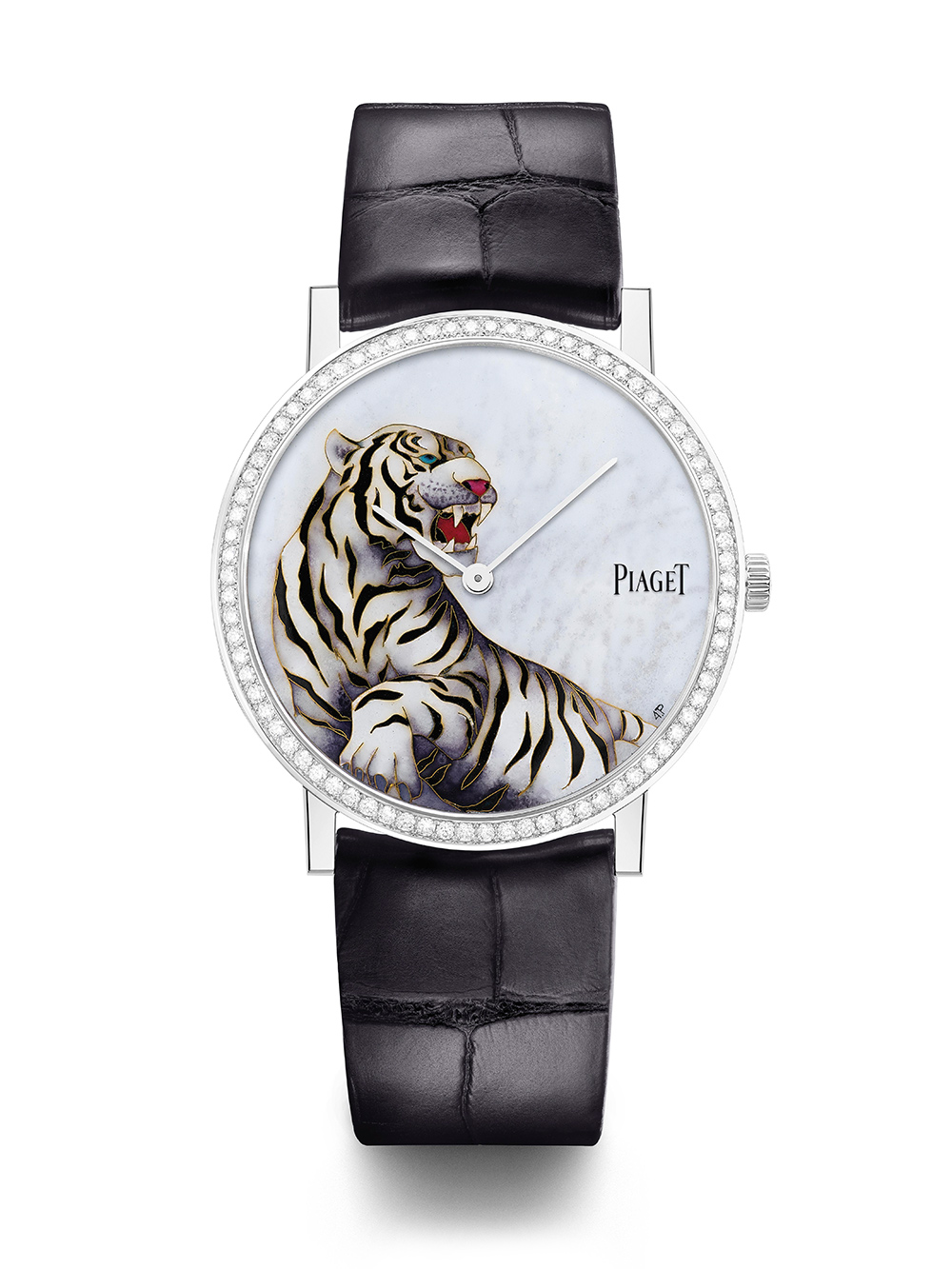 The watch itself is an Altiplano with a white gold case and 78 brilliant-cut diamonds set on the bezel. This is Piaget, there had to be diamonds somewhere. Inside, it houses the Maison’s ultra-thin 430P calibre, a manual movement with a 43-hour power reserve. 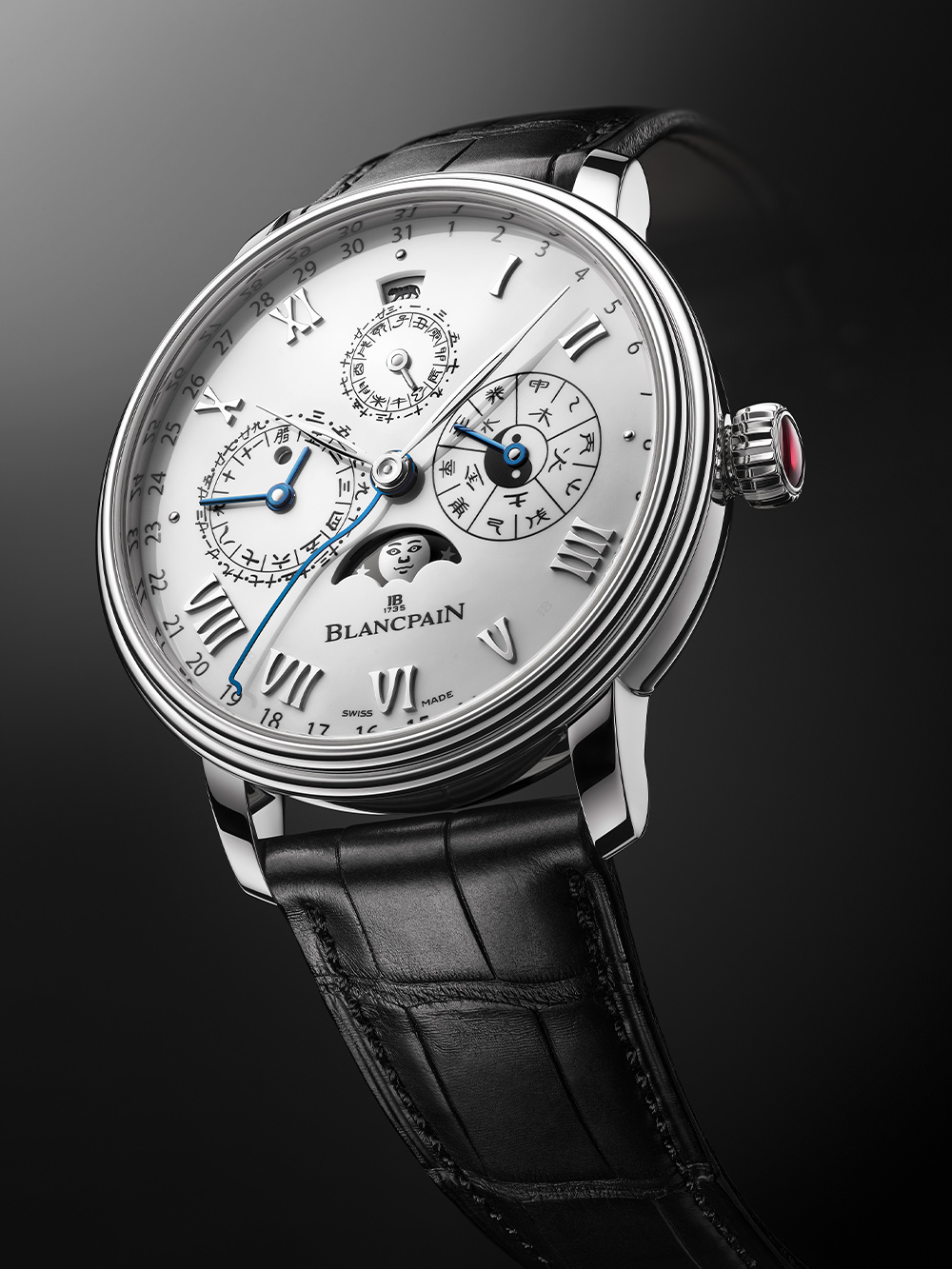 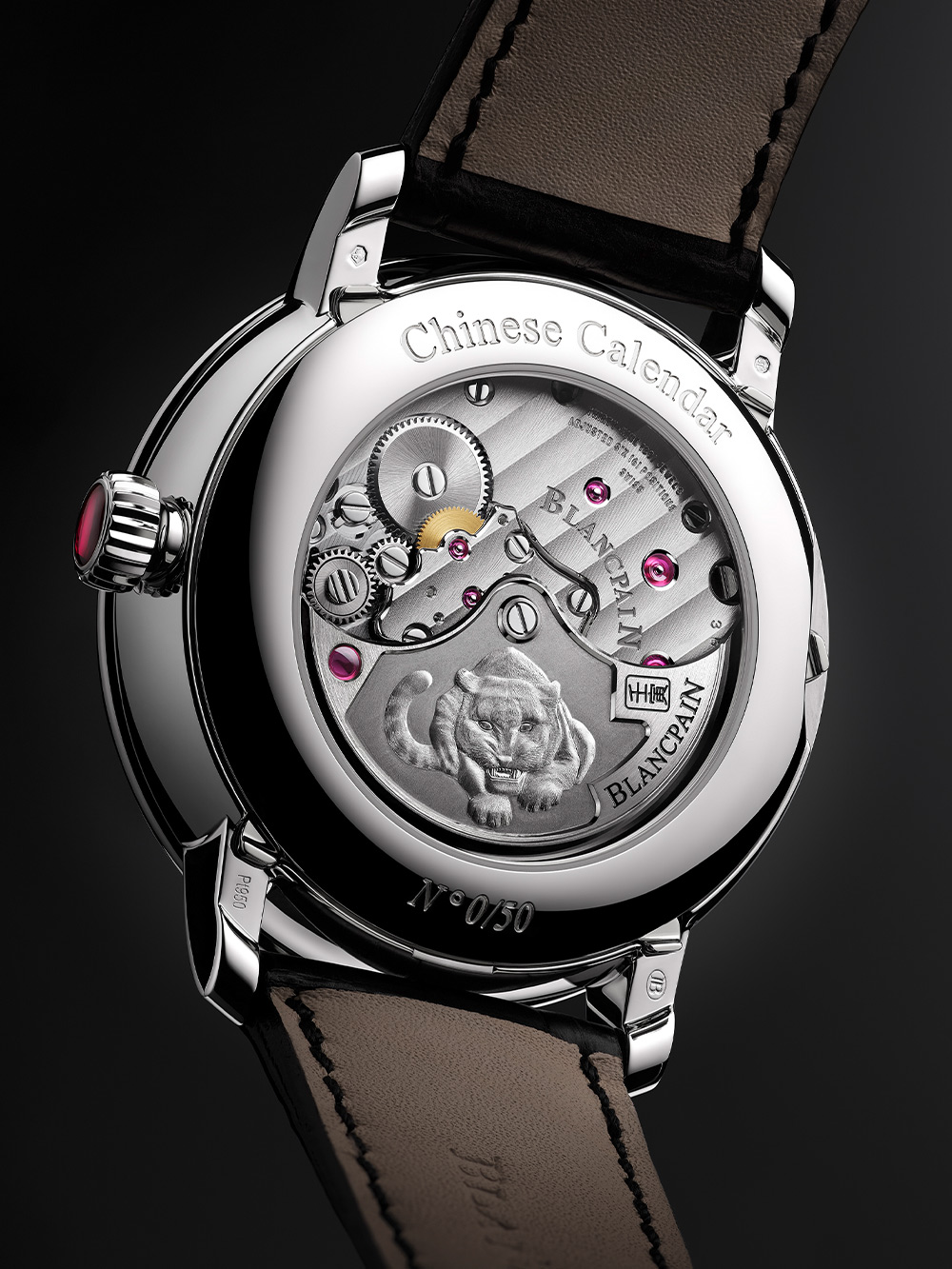 Providing an alternative interpretation of how the New Year should be celebrated in watch form is Blancpain. Instead of a lavishly detailed tiger on the dial, they’ve focussed on their titular Traditional Chinese Calendar complication. It features seven separate functions taken from both the Gregorian and Chinese calendars including elements of the zodiac. The calibre that powers it, the 3638 is a serious bit of kit and has been used in their annual Chinese New Year release since 2012.

To celebrate the tiger, this year’s watch has been given an engraving of the beast on its automatic rotor. The platinum tiger edition is limited to 50 pieces, however there is also a non-limited rose gold edition that sports a yin yang symbol instead of the tiger. 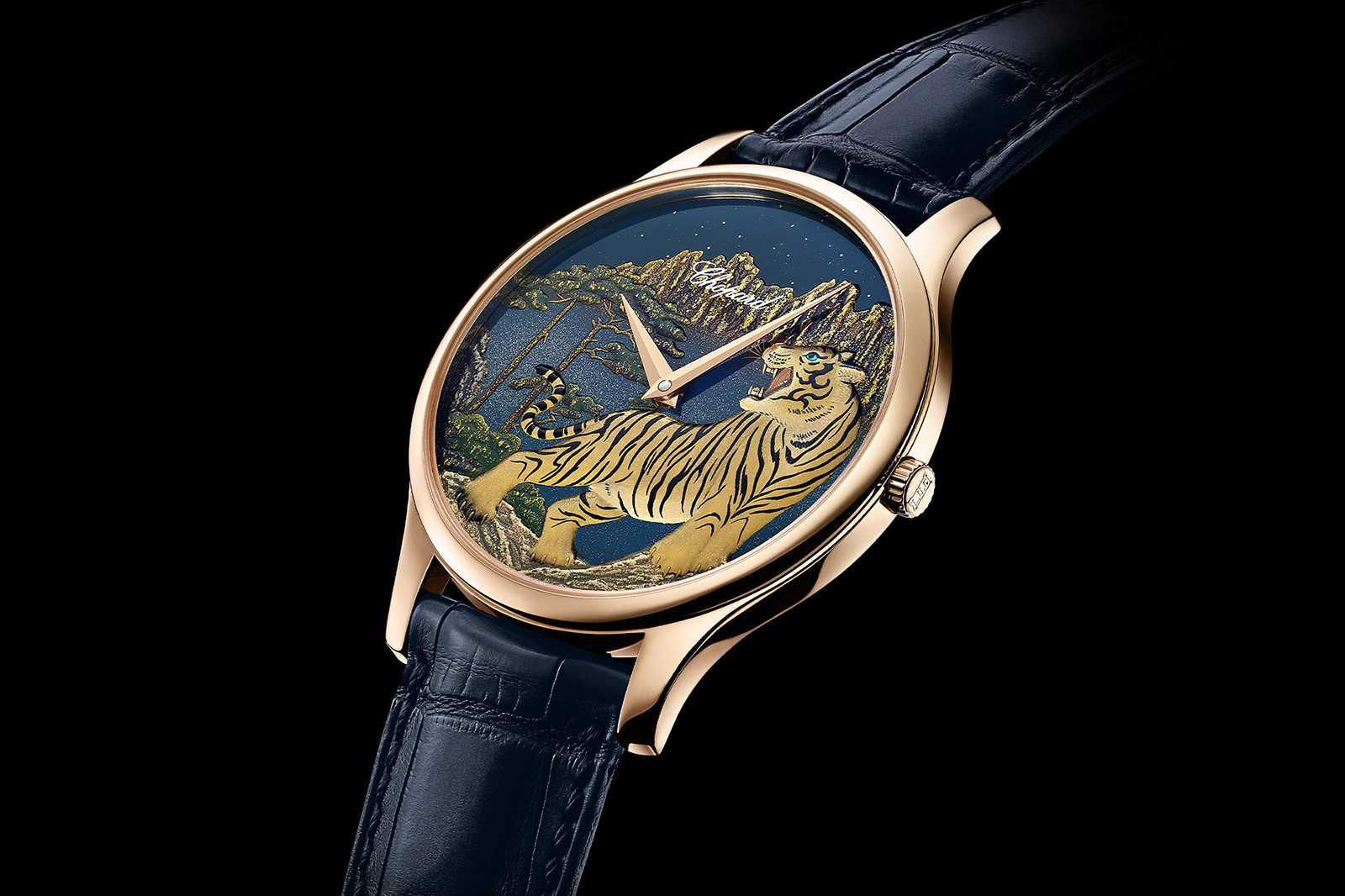 Similar to the Piaget Altiplano we discussed earlier in this article, the Chopard L.U.C XP Urushi Year of the Tiger celebrates the Lunar Year by featuring an intricate depiction of a tiger writ large across its dial. However, rather than enamelling, it uses a different artistic technique called Urushi, a traditional form of lacquer. It’s a painstaking artform and in this rendition uses sap from Chinese trees, as well as the use of gold dust.

In accordance with the prevalence of the number 8 as a lucky number in Chinese symbols, 88 of the watches are available. 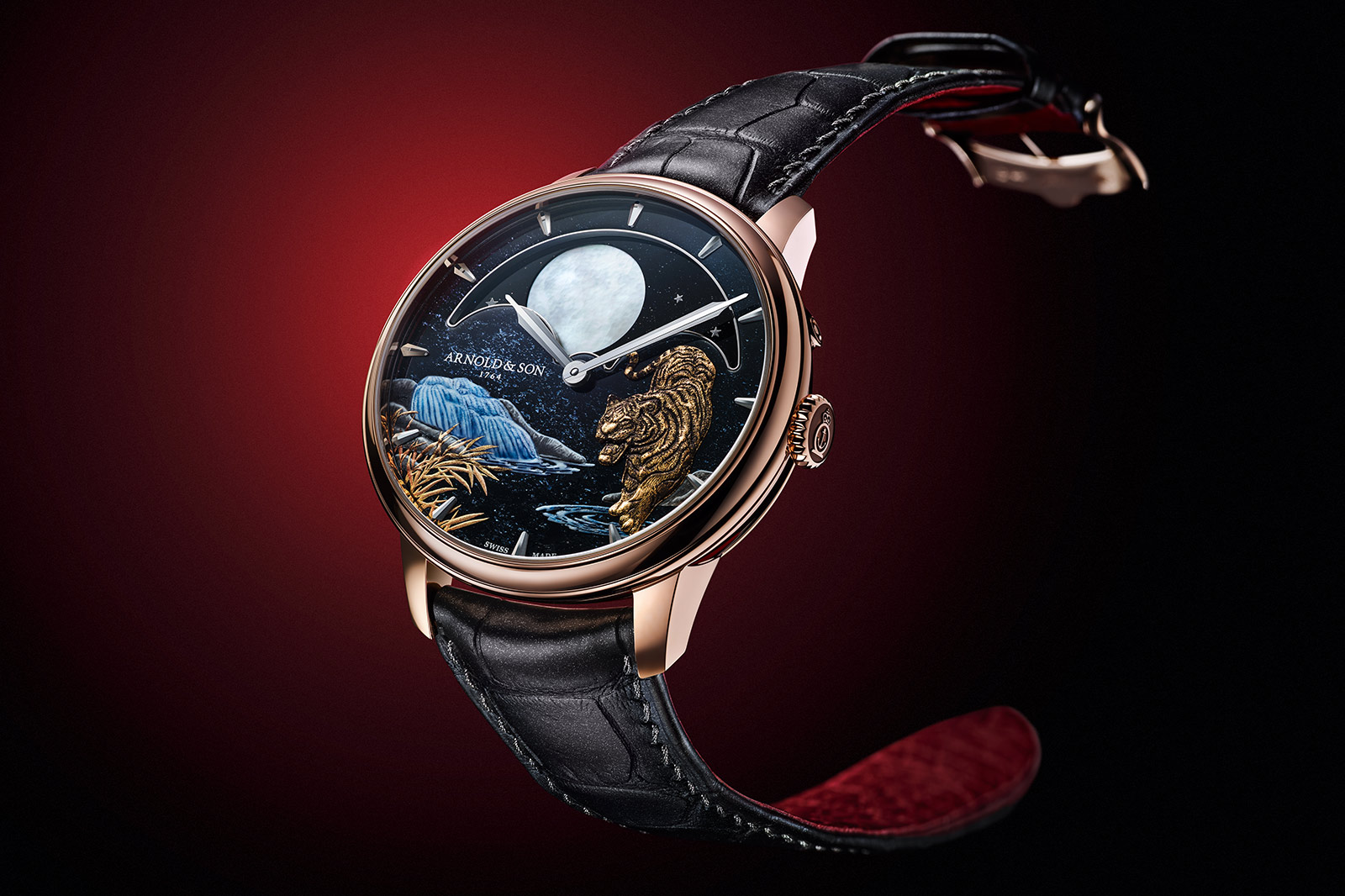 Alongside one of the twelve animals, each year in the Chinese calendar is associated with a primal element, which for 2022 is water. It’s this aspect that Arnold & Son have focussed on for their delicately crafted Perpetual Moon “Year of the Tiger”. The titular feline is engraved in gold while in the background a waterfall symbolises the calming nature of water.

Above the tableau is the large, beautiful moonphase, created from a mother of pearl disc. It’s powered by the manual calibre A&S1512, which has a stellar 90-hour power reserve. Métiers d’Art meets haute horology in spectacular fashion. 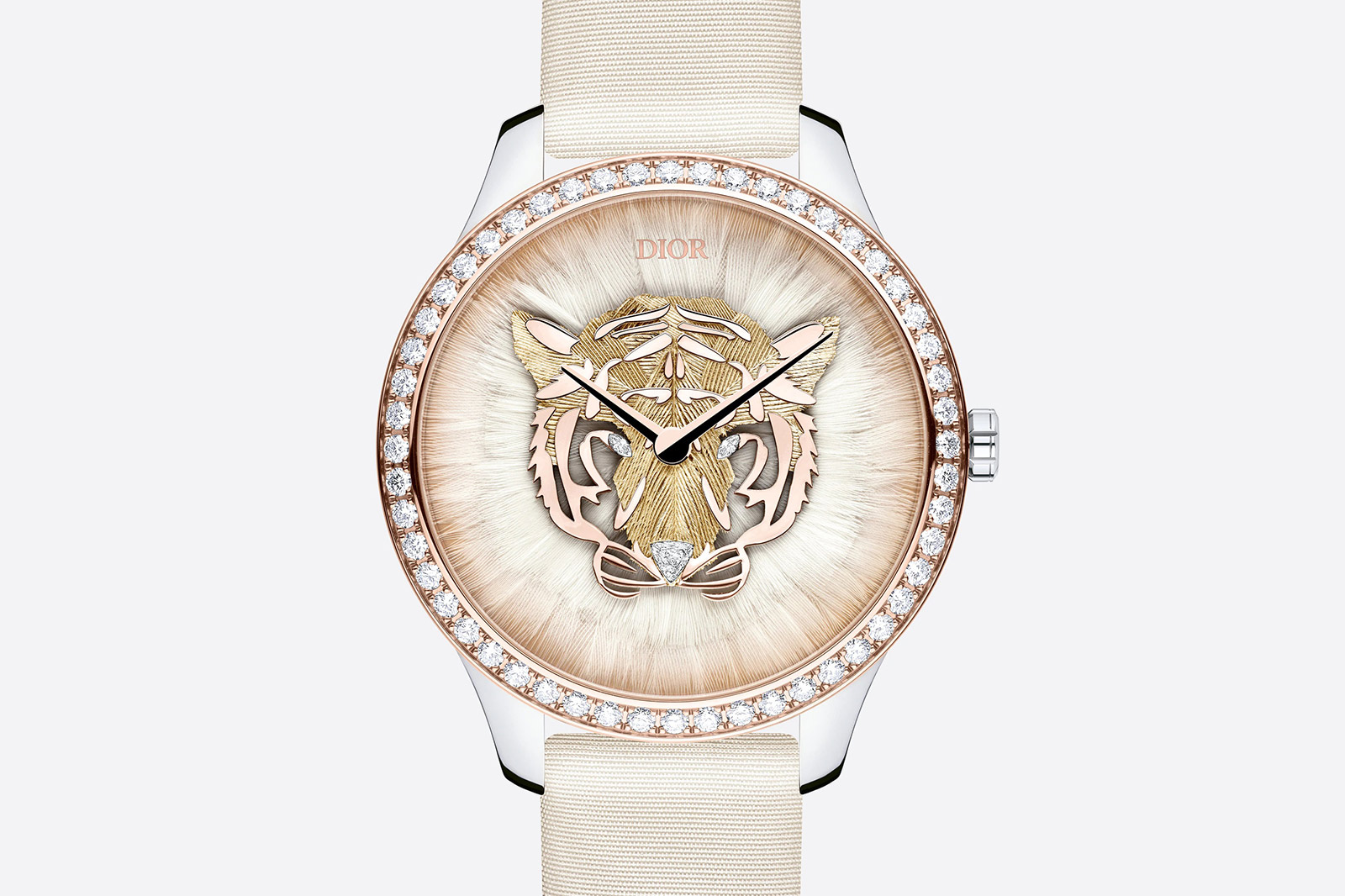 The Métiers d’Art nature of many Chinese New Year watches means that traditional gender perceptions are less relevant. However, the Dior Grand Soir Year of the Tiger has the most distinct feminine edge of any watch we’ve look at so far. After all, it comes on a taffeta silk strap and has trillion and marquise-cut diamonds set in its bezel. 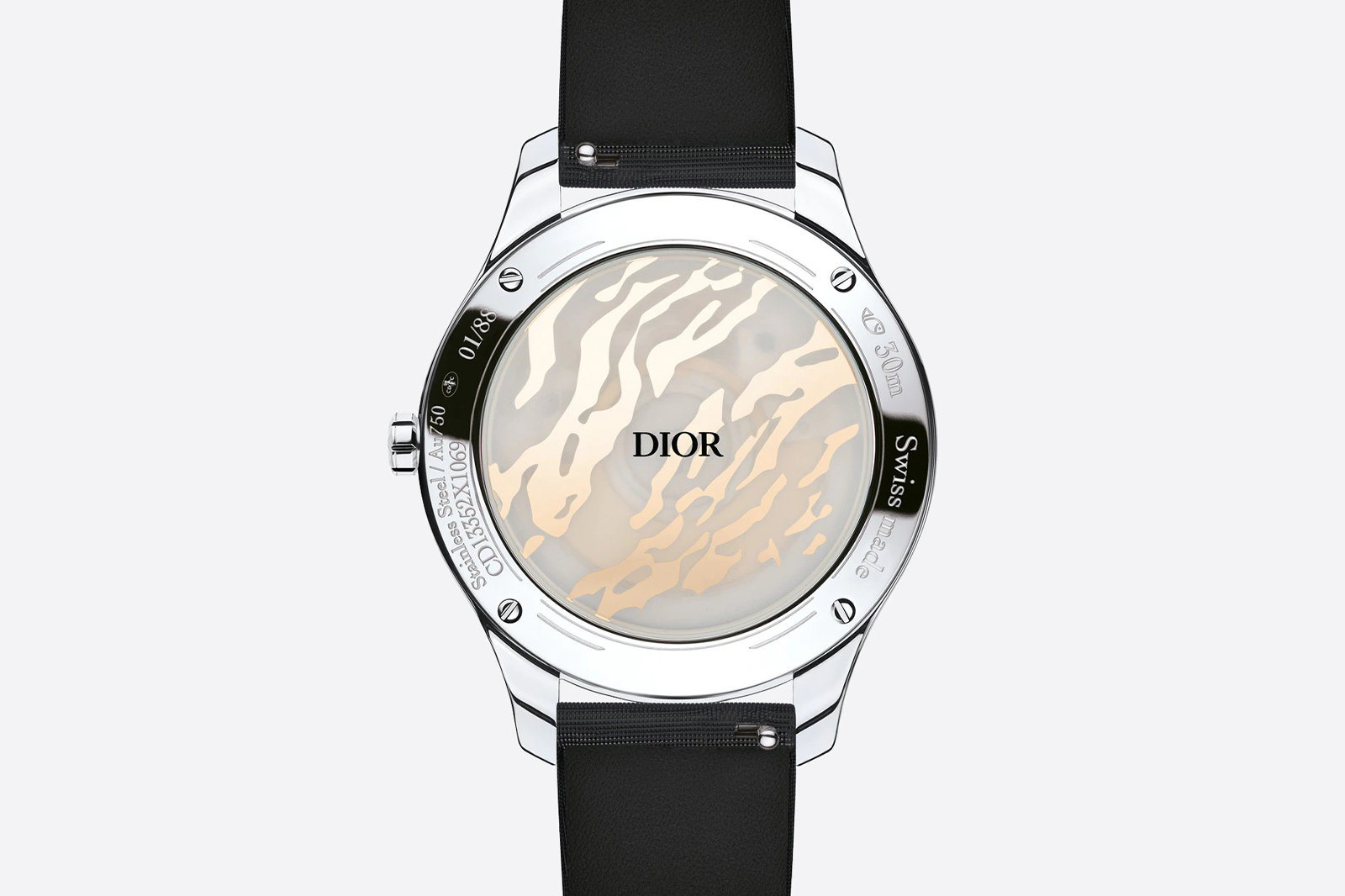 However, regardless of who wears it, it’s an objectively beautiful piece of watchmaking because the dial itself is lovely. The gradient from white to pinky gold of the feathers used in the dial creates a gentle wash of colour, almost a halo, around the central engraved tiger. 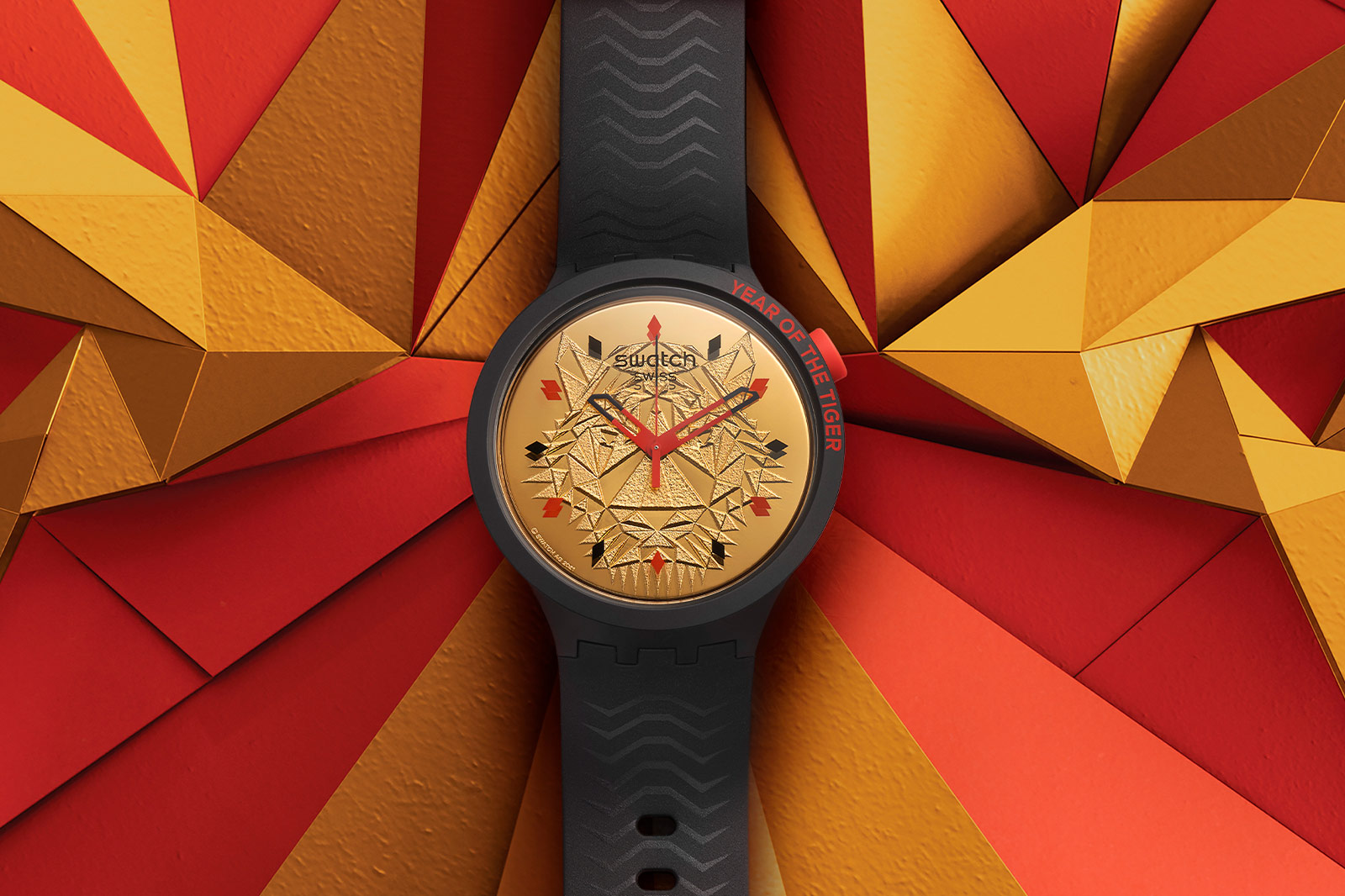 It’s quite a jump from Dior to Swatch but the two watches actually share similarities in the core motifs. That being a stylised and geometric representation of a tiger’s face set centrally on the dial. It’s just that the Swatch version costs £133 not £28,000. Tigers are the Chinese king of beasts and swatch is the king of accessibility so it’s a natural match.

The Tiger Power 2022 is made from Swatch’s bioceramic material, one of the most cutting edge materials in accessible sustainability, which you can read about in our current trends in sustainable watchmaking article, and features orange and black accents on its dial, hands and strap… because tigers. It might not be to everyone’s tastes and it’s quartz but for the price, it’s hard to knock. 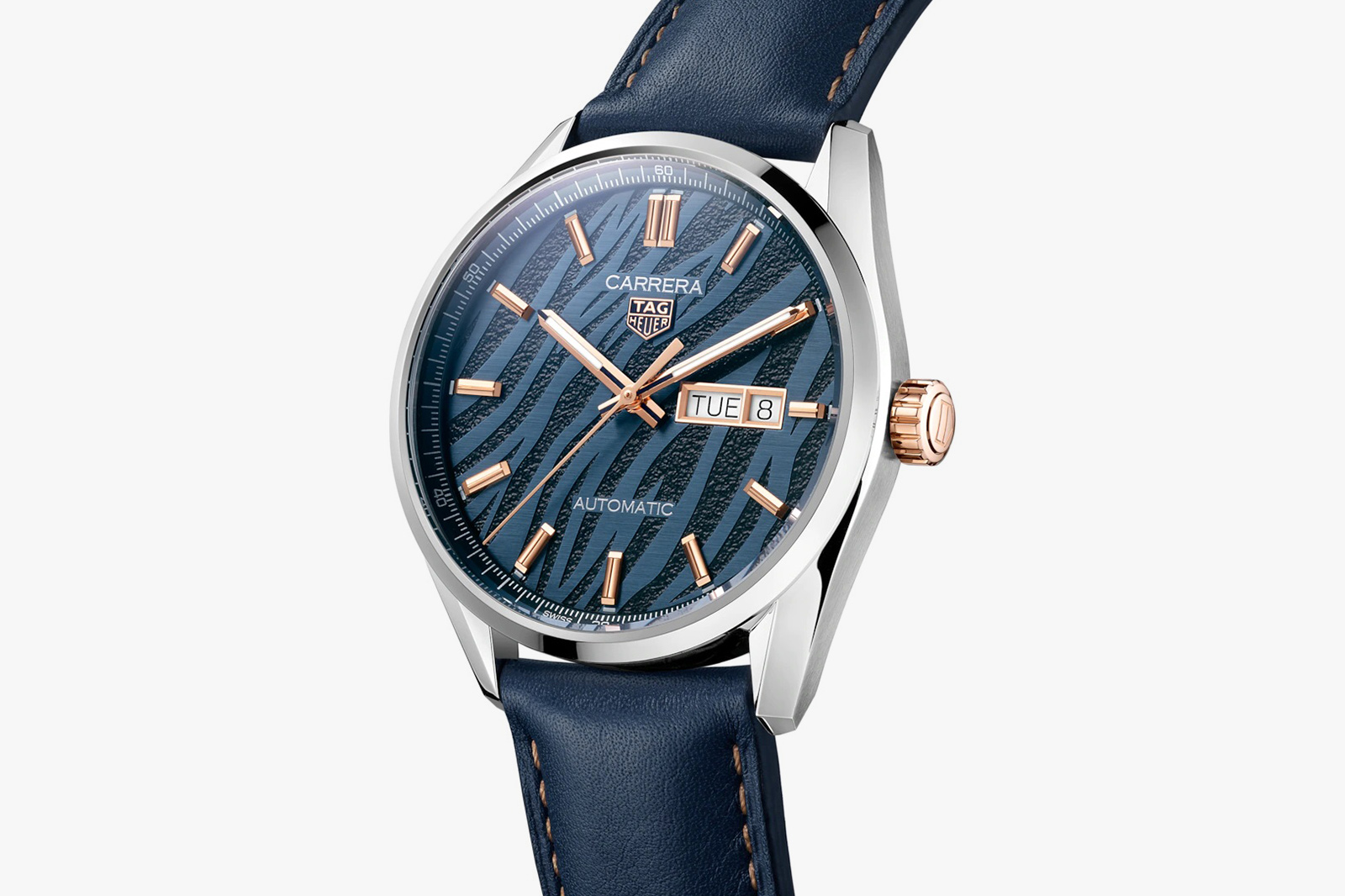 It is somewhat surprising to me that more watchmakers haven’t taken the direction of Tag Heuer’s Carrera Tiger, which rather than placing an engraving of a tiger on its dial, has instead opted for a tiger print pattern instead. Although there is a picture of a tiger on the display caseback as well. 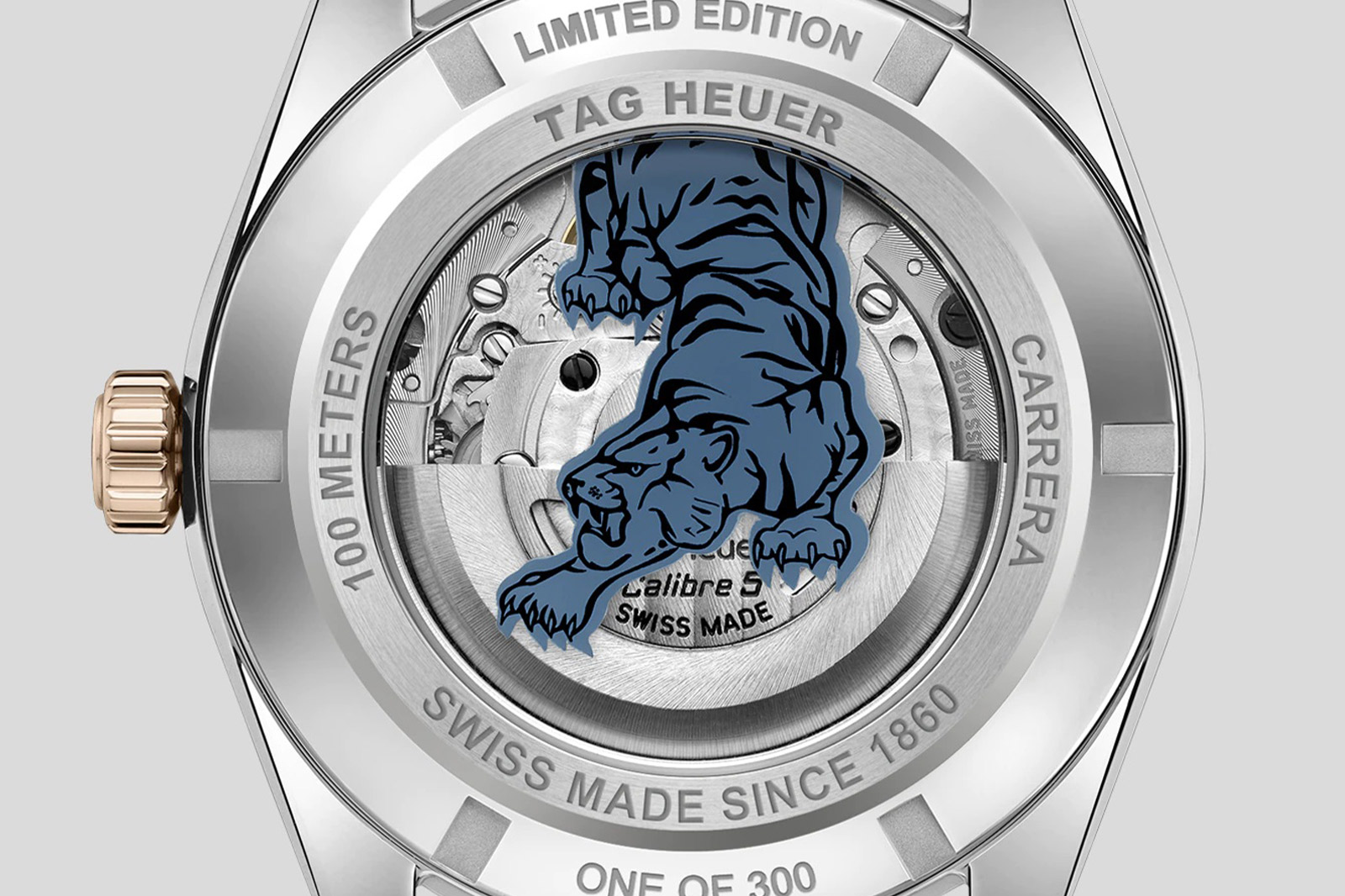 The dial features the traditional tiger print with the stripes created through the use of two distinctive textures in shade of dark blue. The lighter stripes have a horizontal brushed finish while the darker ones have a leathery appearance. It’s all pulled together with a hint of luxury thanks to the 18k rose gold hour markers and hands. Inside is the calibre 5 automatic movement. 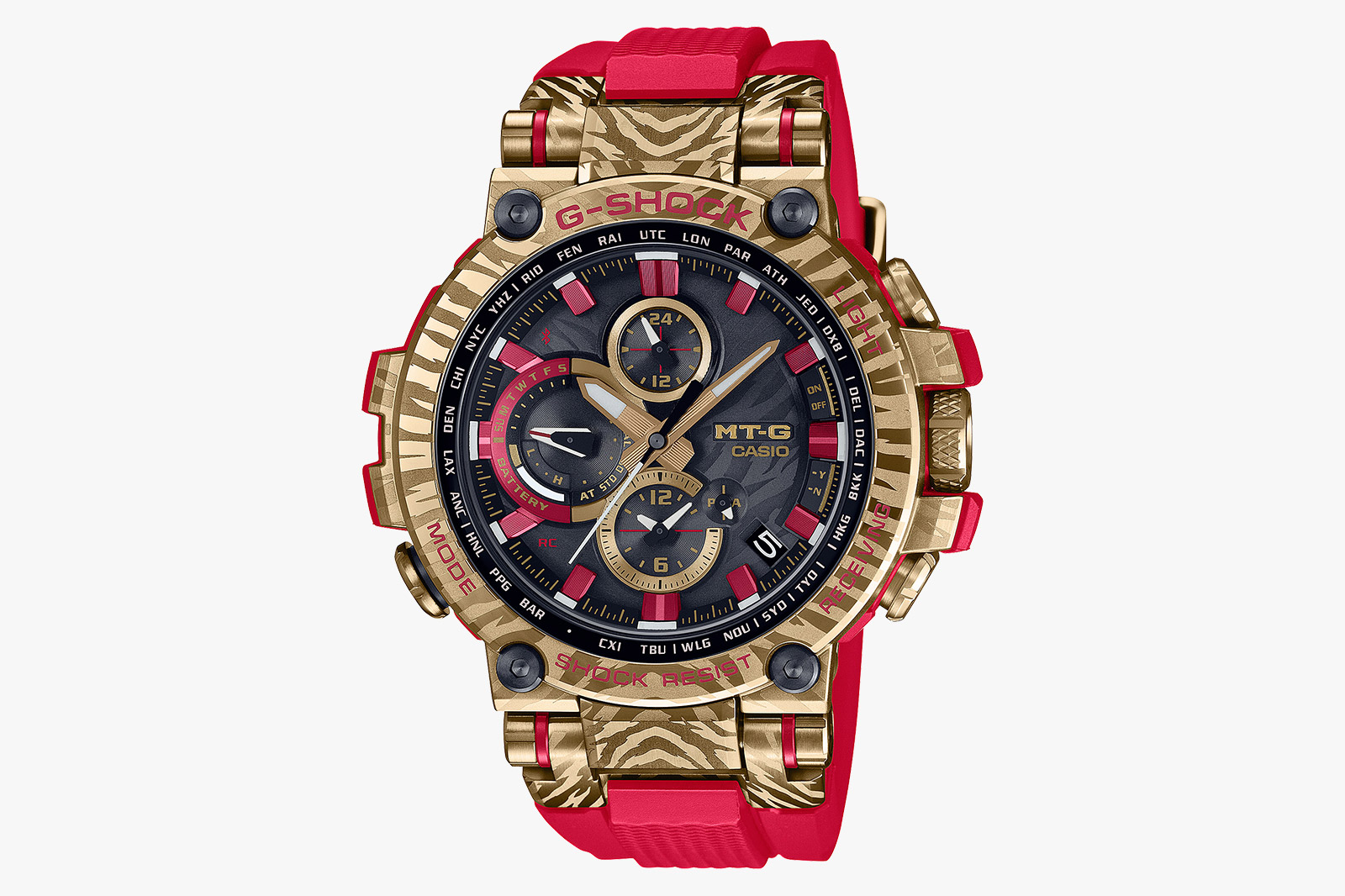 Like the Carrera above, G-shock have gone for tiger stripes instead of a whole cat for their Lunar New Year offering. The pattern was created with a single piece of material that was then laser peeled in the designated shapes to reveal a different shade of the golden colour. Paired with bright red accents such as the strap and hour markers on the analogue display, it makes for a bright and incredibly bold watch. Red is, of course, an auspicious colour in Chinese tradition. 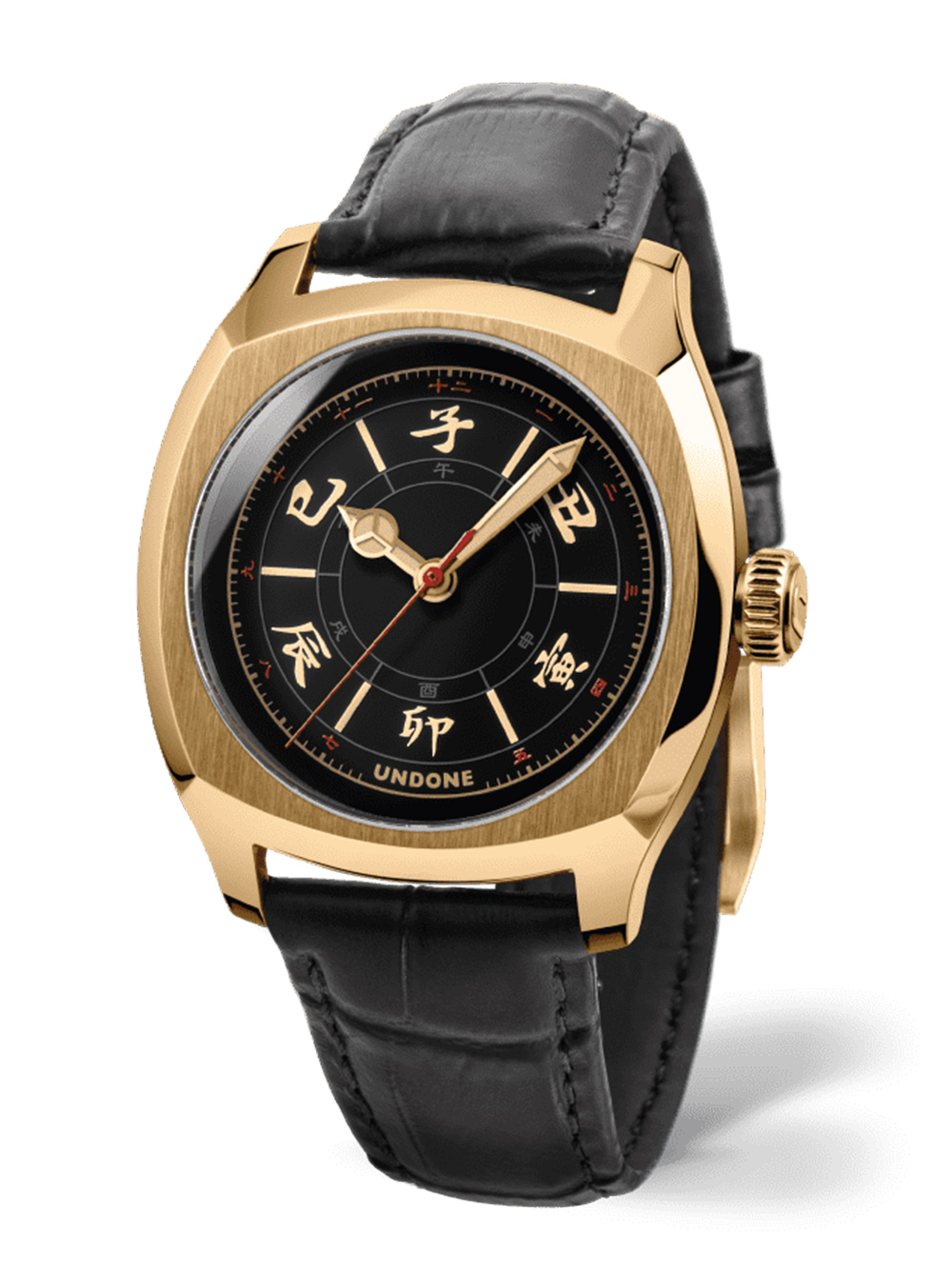 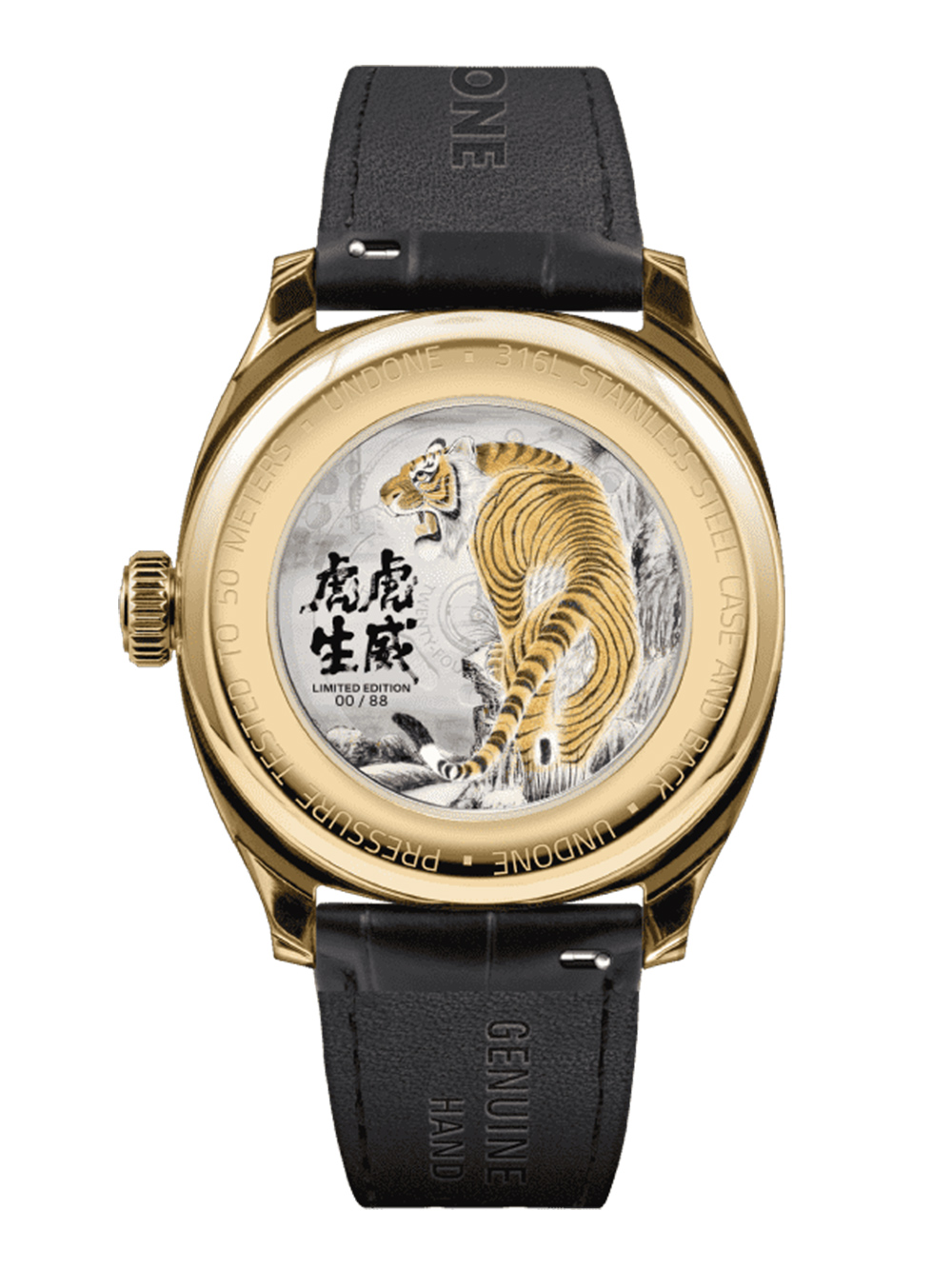 For Chinese New Year, Undone have created the Terra Chinese Hour in either silver or gold coloured stainless steel. It uses a traditional Chinese method of timekeeping with six yellow Chinese characters depicting the morning hours and 6 grey character denoting the afternoon. It certainly looks the part and on the reverse side is an illustration of a tiger and the phrase ‘To forge ahead with the vigour and vitality of a tiger’ written in Chinese characters as well.

Inside is houses the TMI NH35A automatic movement, which has a 42-hour power reserve and helps to keep the watch accessible at just £417. 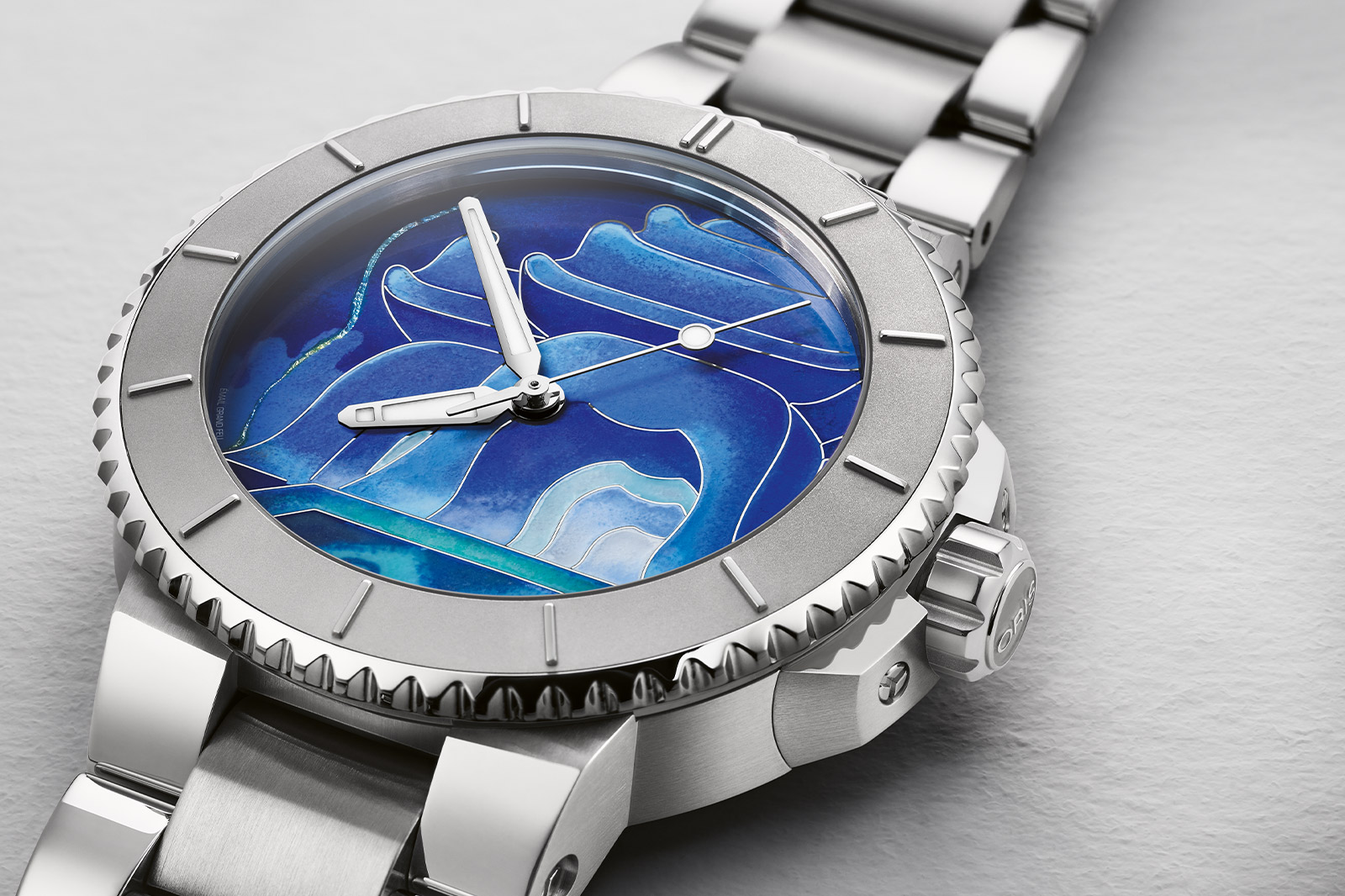 While Oris’ new Sun Wukong Artist Edition is not linked to the Chinese New Year, it is linked to perhaps China’s most famous fable outside of the zodiac: the tale of Sun Wukong, the Monkey King. As such it finds a natural place alongside these Year of the Tiger editions and has been released by Oris to coincide with the New Year.

The watch is inspired by the 1961 Chinese animated film The Monkey King: Uproar in Heaven, which recounts the adventures of the titular Monkey King. Oris’ watch, which is based on the Aquis model, immortalises a significant scene from the film where Sun Wukong visits the underwater palace of the Dragon King to retrieve his signature staff. 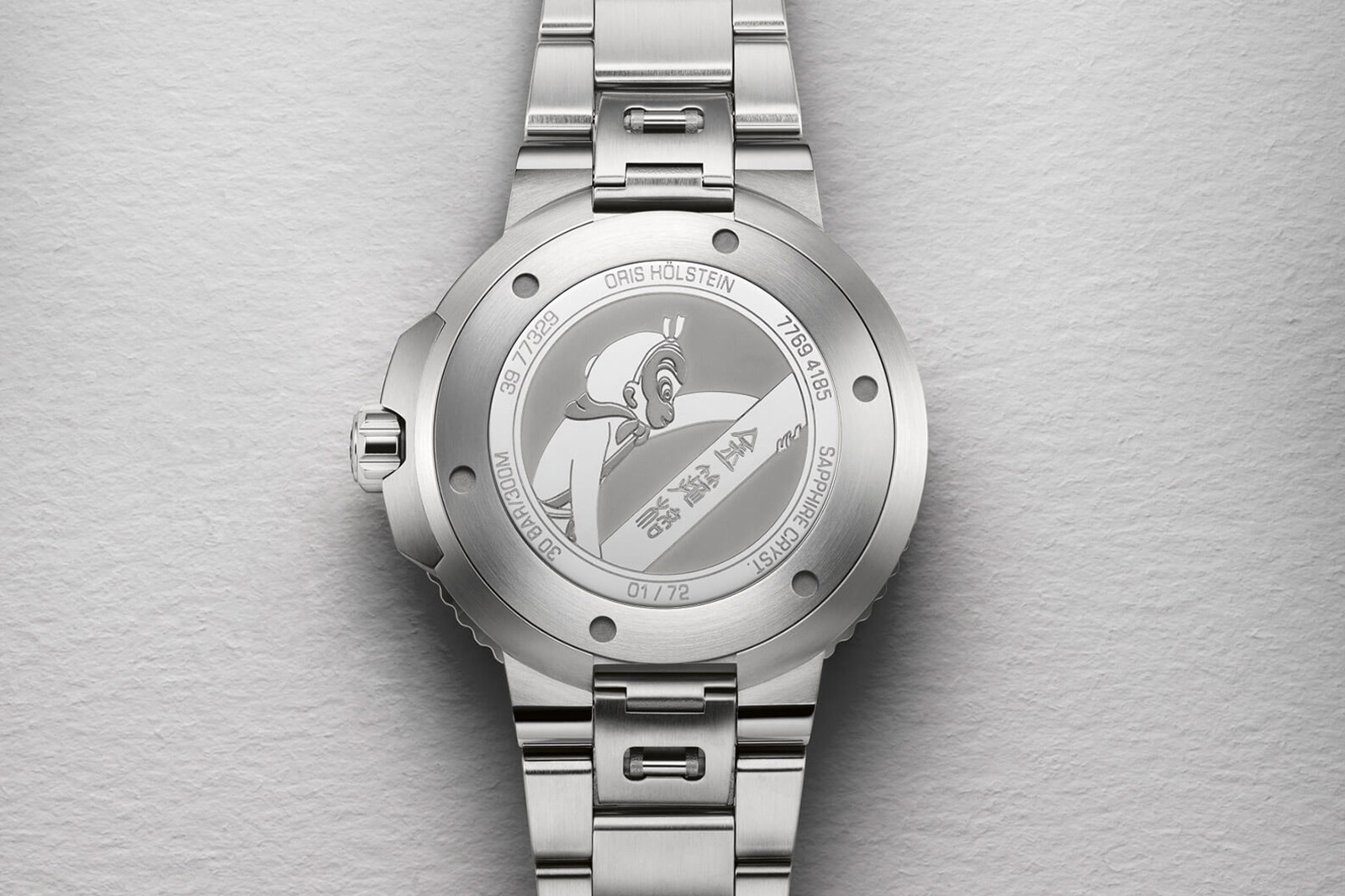 Most significant, though, is the fact that this is the first watch from Oris to ever feature cloisonné enamel. They’re not a watchmaker associated with métiers d’art so it’s a pretty landmark moment. And it works beautifully, the slightly abstract palace rendered in gorgeous shades of blue, it looks almost identical to the original animation.

This watch isn’t limited to the iconic, lucky 88 pieces, as there are only 72 available instead. 72 is the number of shapes the shapeshifting Monkey King can turn into.