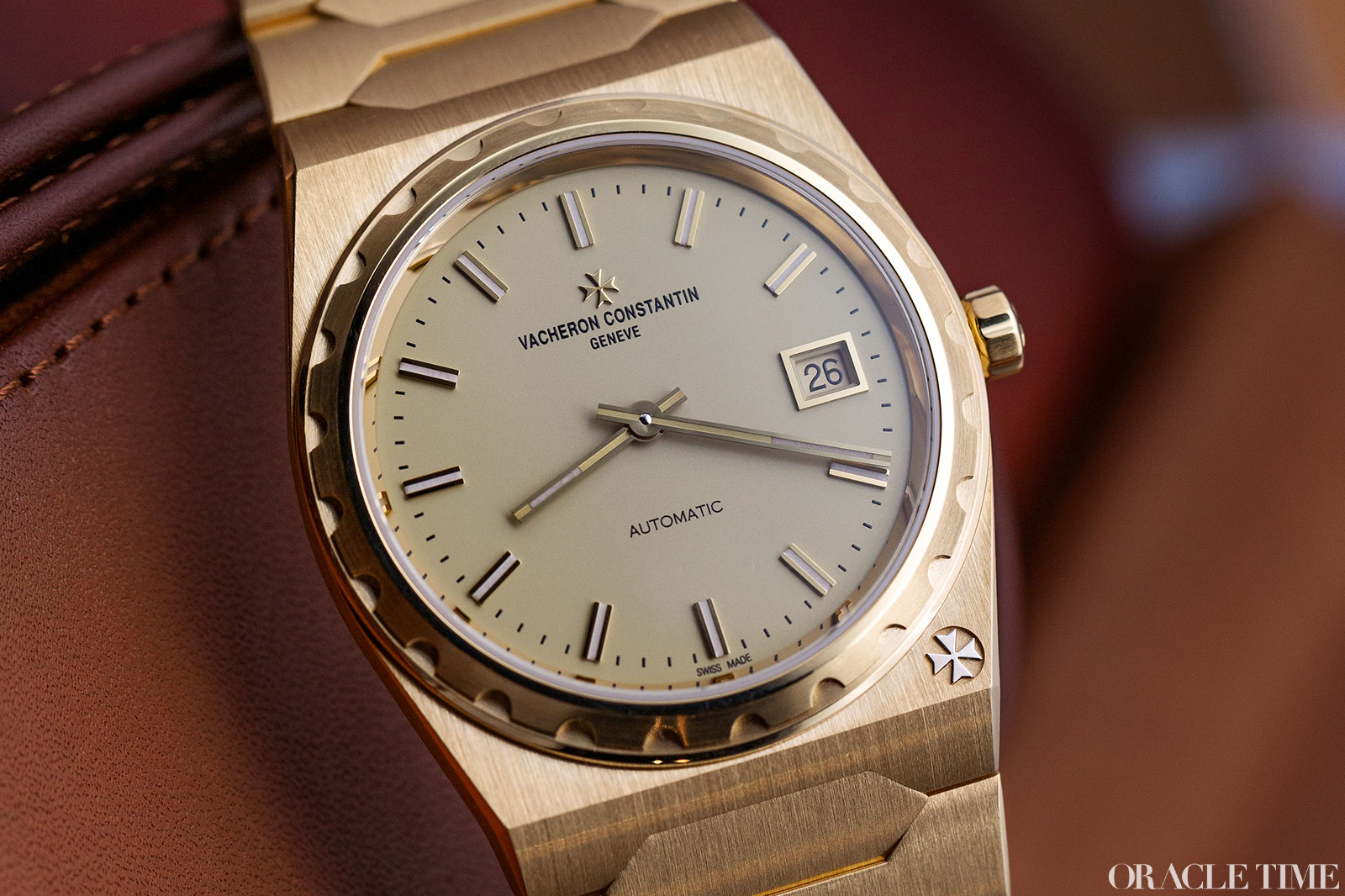 Well, it finally happened. After years of will-they-won’t-they tension and a less-than-slow burn on the pre-owned market proving there was a 1970s-shaped hole in the watch world, Vacheron Constantin have done what we all knew they would do (but secretly dreaded they wouldn’t) and re-issued the legendary 222.

I won’t wax lyrical too long on the history of the piece, but the TL; DR goes like this. Back in 1977, Vacheron was turning the grand old age of 222 years old and they needed a centrepiece design to mark the occasion. Two years earlier, they’d tried to throw their hat into the sports luxe ring against the then-new Royal Oak and Nautilus, but couldn’t quite make their mark, and so repurposed the newly rounded bones of what was the 2215 Royal Chronometer into the anniversary-honouring 222. This time, they nailed it.

Flash forward to today and the 222’s aged magnificently. Not only is its DNA alive and well in the Overseas collection, the integrated bracelet, and notched bezel, but the overall sports luxe look that defined it is about as relevant now as it’s ever been. Needless to say, it’s a revival we’ve all been expecting. Is it worth the anticipation? Yes. Yes it is. 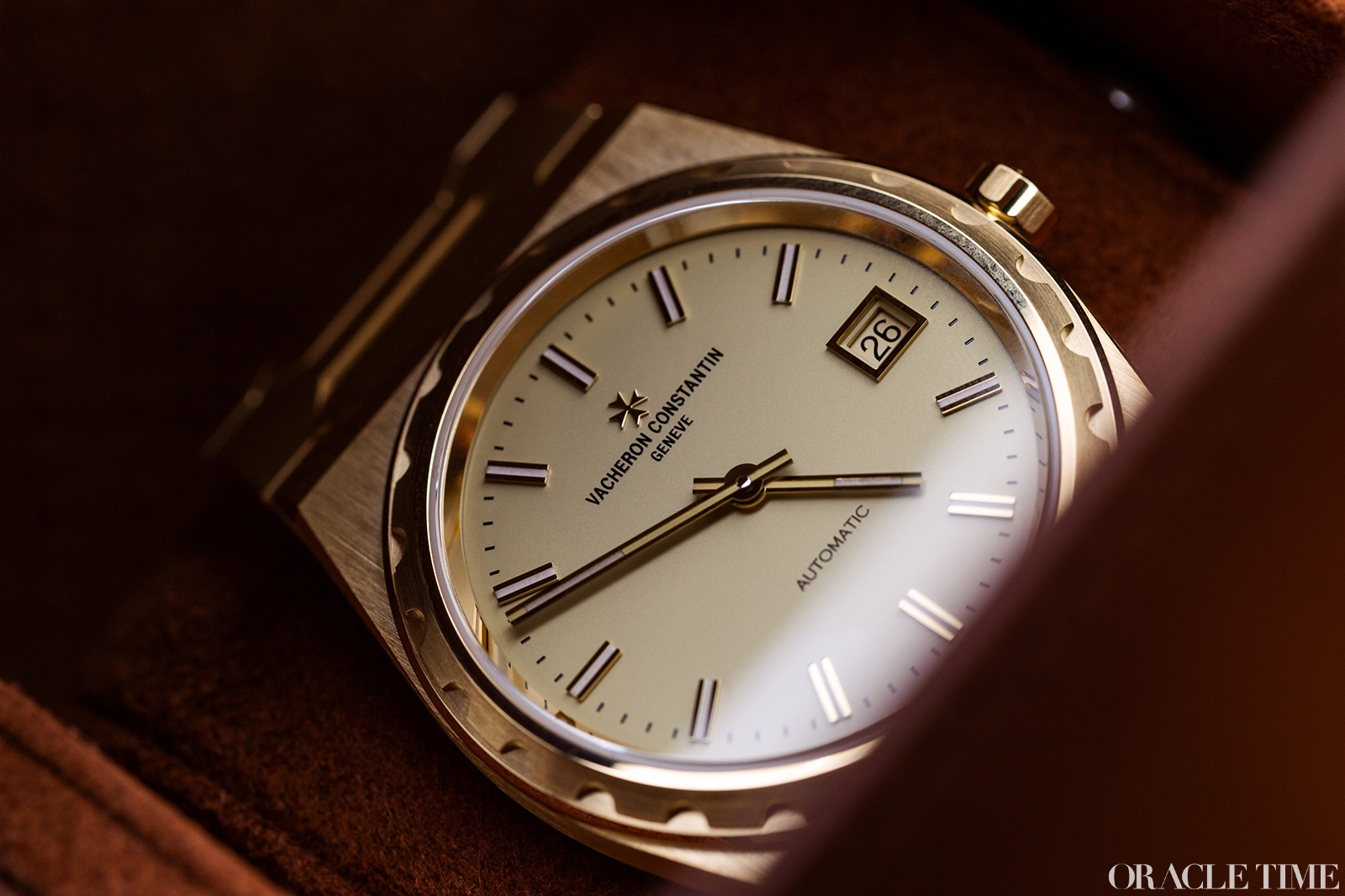 Vacheron have been very true to the original piece, with it’s ‘jumbo’ 37mm case and famous bezel, somewhere between notched and fluted. These days they could have been excused for upsizing just a touch but not by me and most lovers of the original.

The case also shows off the Maltese cross at five o’clock, which is honestly an artefact I’m not too sure about. It’s nicely done, the white gold logo soldered directly onto the case, but it’s one of the few qualms I ever had with the 1977 piece and an aesthetic change I’d have easily forgiven. 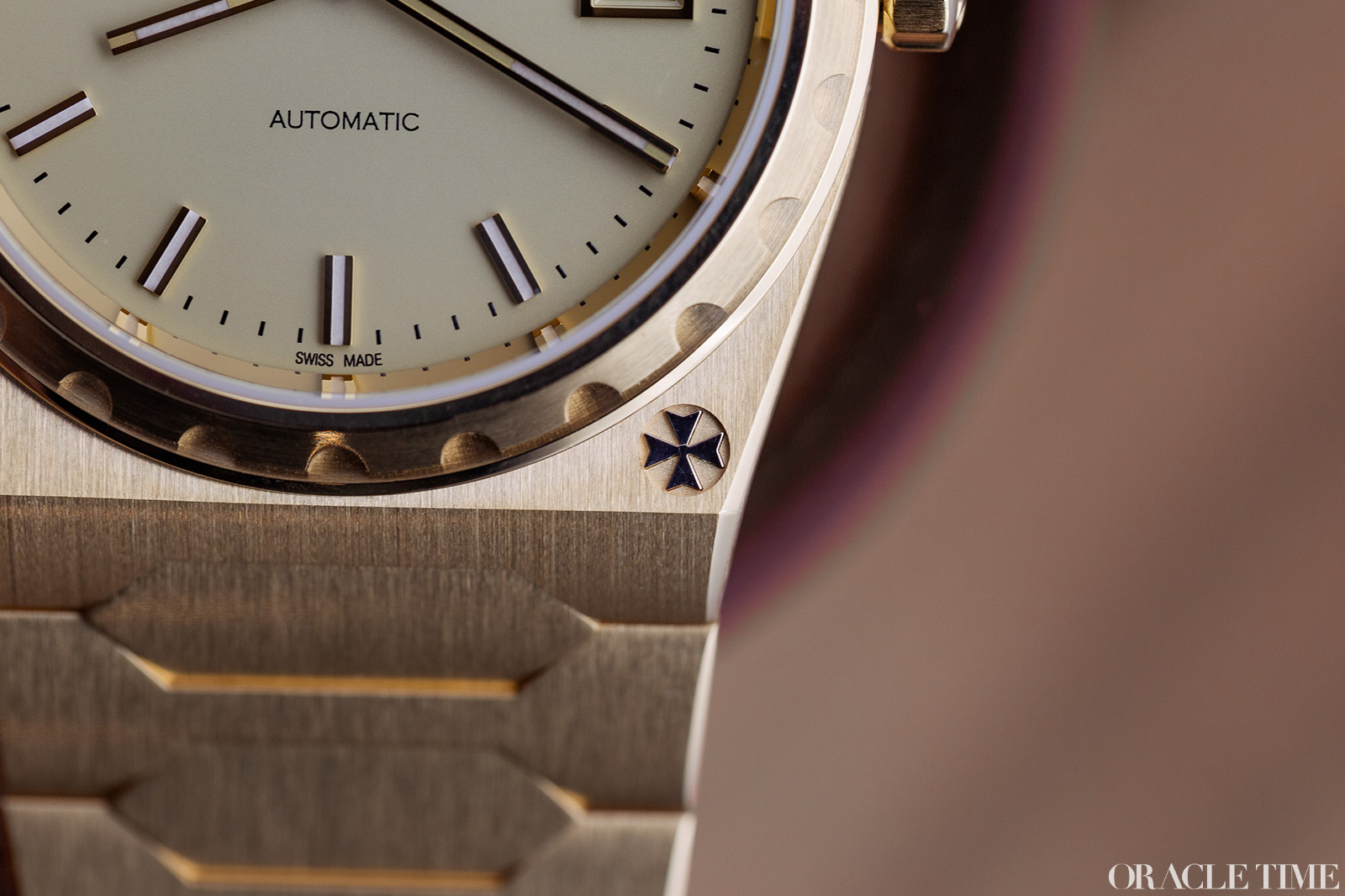 Possibly the most important aspect Vacheron have kept intact however – and quite possibly the loveliest part of the entire watch – is the bracelet. The jewel-shaped hexagonal links are beautiful, and not just in a quirky retro way. They’re just objectively phenomenal, both visually and on the wrist. Sure, it’s a little more refined and classical than the legendarily cool Royal Oak bracelet, but it can easily go toe-to-toe with its Genta-designed precursor.

If anything, the Historiques version of the bracelet is even better than the original. Vacheron have upped the finishing, with vertical satin-brushing. The joins between the links have been changed ever-so-slightly too, hiding the pins better and generally making it feel a bit more solid and comfortable on the wrist. It also has a new clasp, but I can’t say I noticed the change all that much.

There are also much bigger changes internally. This is a modern watch so a contemporary calibre is a must, namely the Calibre 2455/2. Its 40-hour power reserve could be better at this price point (it’s not cheap, as we’ll get on to), but otherwise it’s a stunner because yes, this version of the Vacheron Constantin Historiques 222 has an open caseback. I’m sure some collectors will mind that; I do not. It’s a pretty sight.

The new movement does have another subtle effect: it moves the date window in a little bit from the edge of the dial. It makes it a touch more readable, though if Vacheron were going to move it I’d just as soon do without entirely. The date window has a dial-matched background so it’s at least subtle, but when given the choice I’d always drop the date on an otherwise time-only timepiece.

The dial itself is pure retro loveliness. It’s matte, so it has that monochrome 70s charm and matches the particular yellow gold of case and bracelet flawlessly. There’s a subtle contrast with the polished indexes – Vacheron’s ‘Anatomy of Beauty’ (a concerted effort to point out their attention to detail) on full display – that I love. 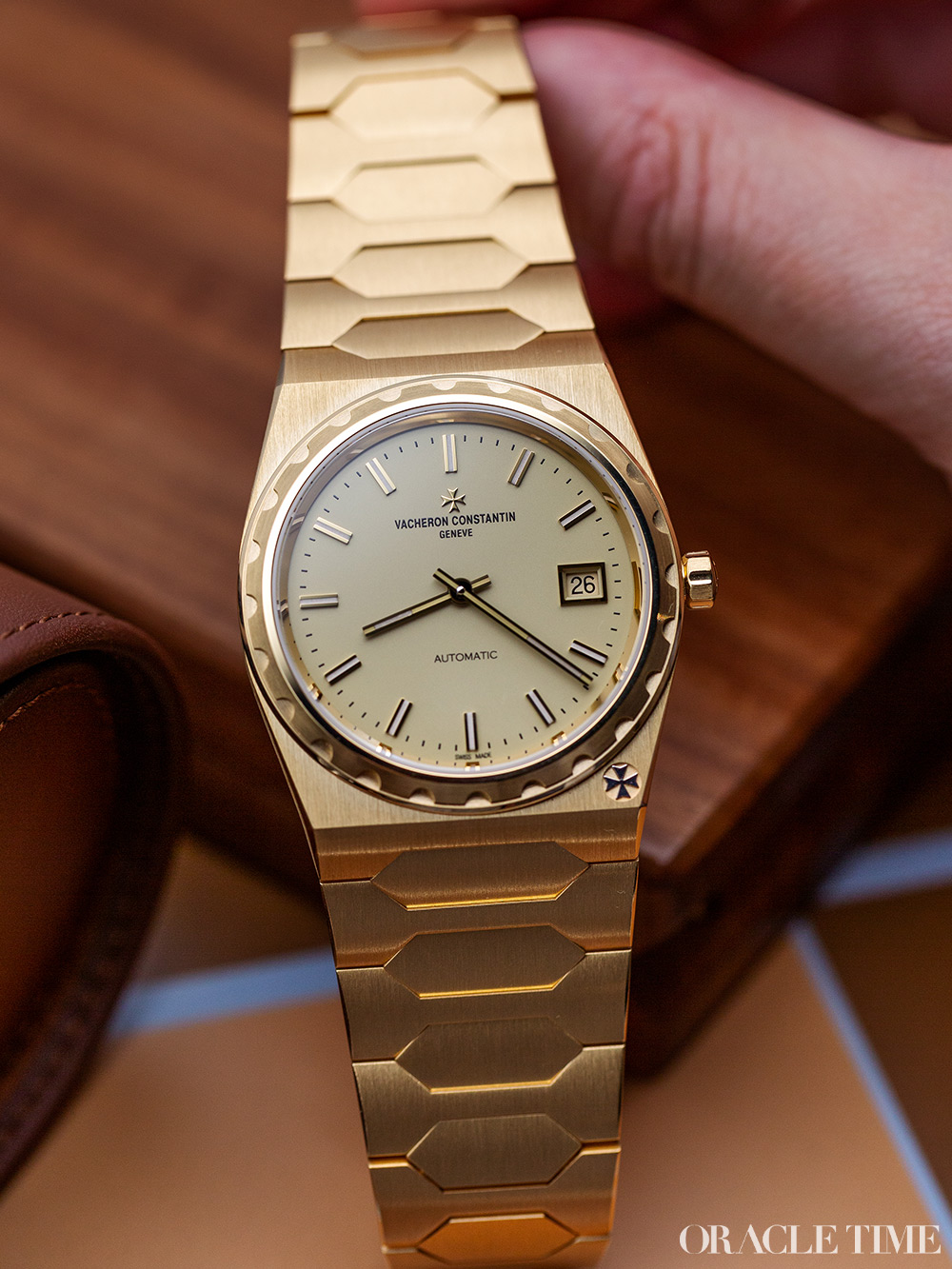 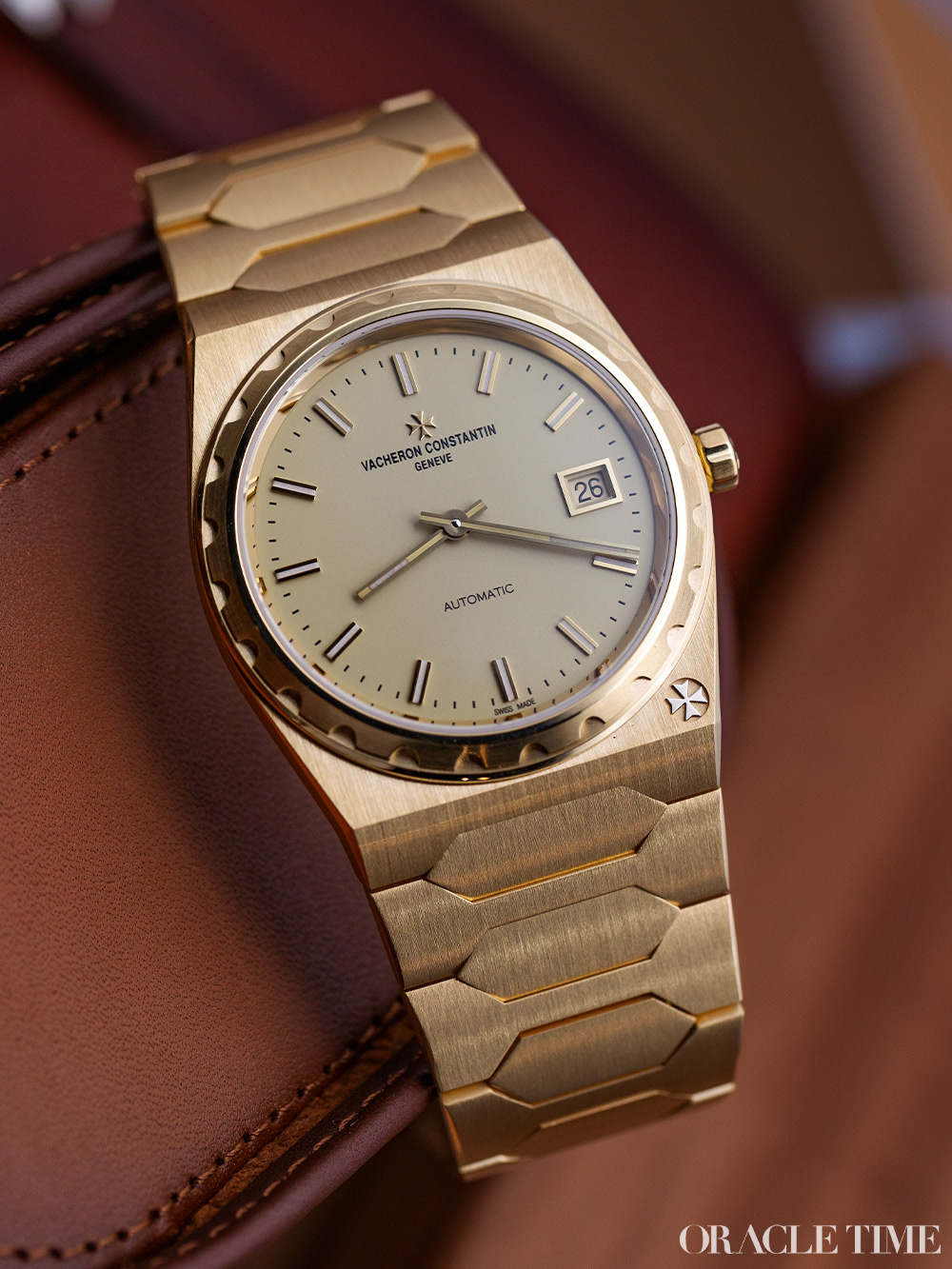 Minor gripes aside, there’s only one aspect of the Vacheron Constantin Historiques 222 that I have a problem with: it’s gold. There’s precedent for a full gold 222 of course and there’s no denying that it’s an absolute stunner, but after all this waiting I was really hoping to get my hands on a revamp of that original steel model.

It’s still a possibility of course. When asked, the party line from the brand is a frustratingly ambiguous ‘who knows?’ They’d be missing a trick if they didn’t, even if it happened to be a limited edition. I mean, that would frustrate me a little, but it would be understandable. And saleable.

So yeah, long overdue as the 222 may be for a revival, it’s arrived, and my only substantial gripe is about what it’s not. Would I buy one in gold? If I had the 58K to put down for it, definitely. But I’d probably hold off at least a little while longer until I’m sure that a steel edition isn’t imminent. And perhaps more importantly, that I could actually get one.