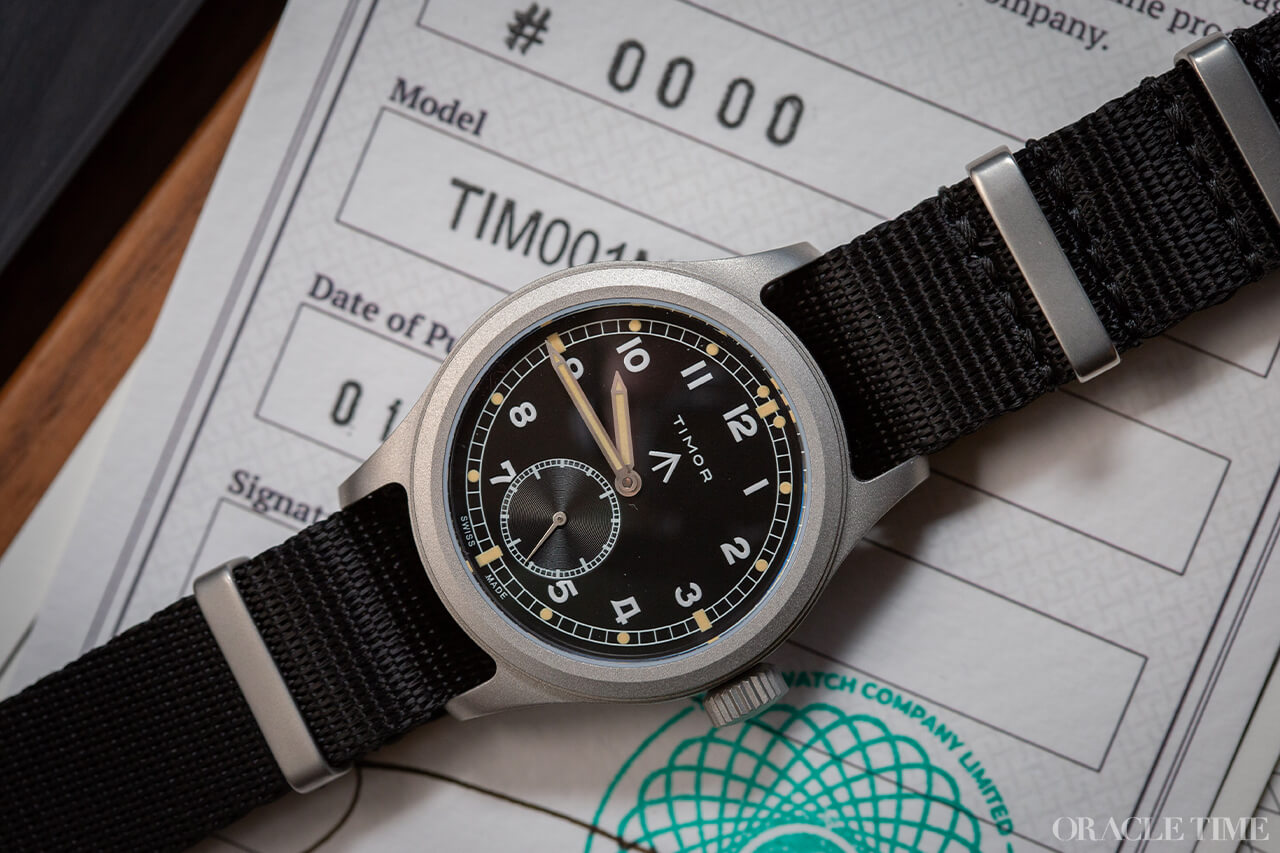 The Dirty Dozen is legendary. I mean the collection of field watches commissioned by the Ministry of Defence rather than the film. Sure, the Lee Marvin vehicle is decent, but the 12 timepieces commissioned for WW2 have been getting more and more recognition in recent years – and prices to match – with a full set going for £27,000 at Fellows earlier this year.

It’s seems odd then that nearly all of the members of the Dirty Dozen, which ranges from the likes of Jaeger-LeCoultre to Eterna, haven’t gone back to the design. In fact, until 2020 the only real option (other than homages from the likes of Bremont and Christopher Ward) was Vertex. Now though the British brand might be being given a run for their money in the form of Timor. 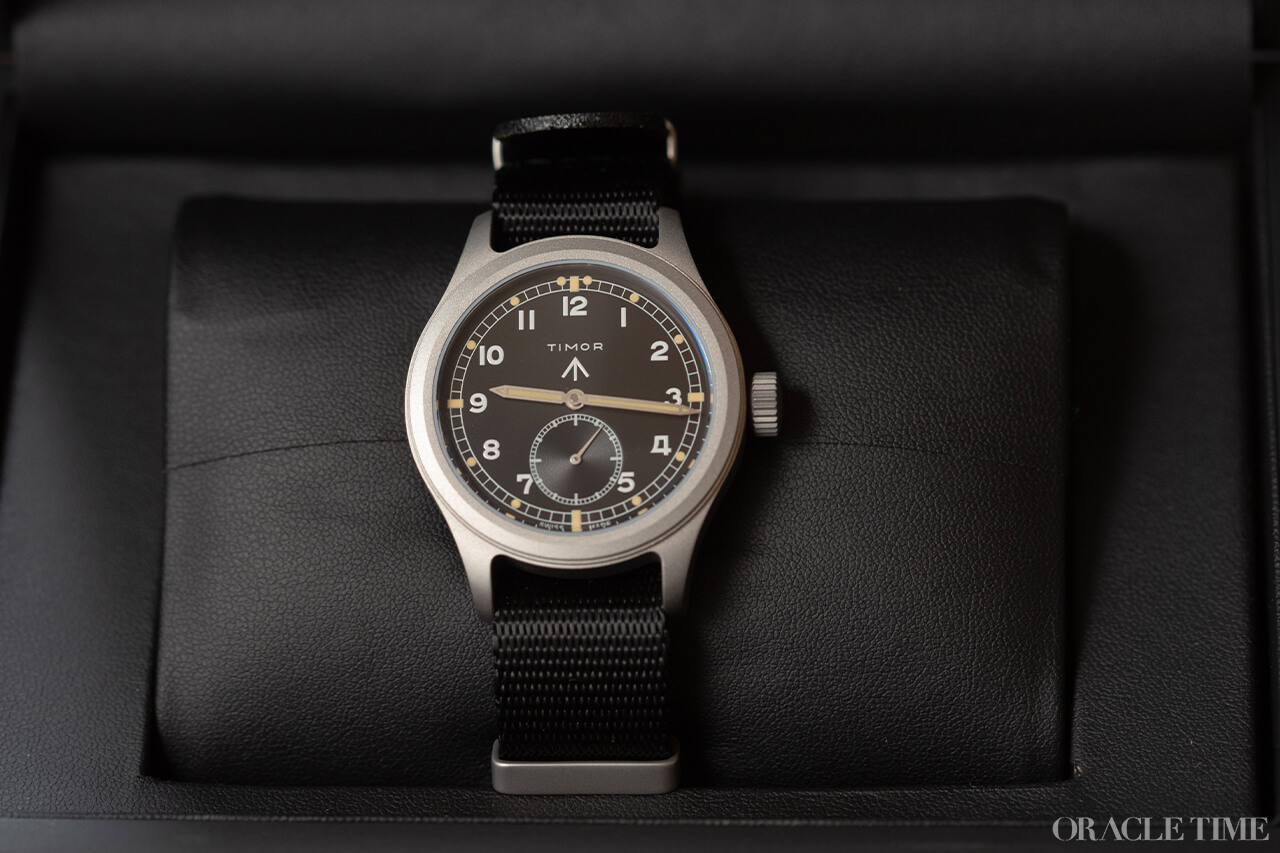 Timor was one of the many casualties of the quartz crisis in the 70s, with the name knocking around a few manufactures and owners in the decades since. That was until British army vet Benjamin A. Briggs found out about it. He convinced the Swiss owners at the time that he could make a go of it back on home turf and soon Timor was a shiny new Kickstarter project.

It was one I first heard of when my dad – a military watch collector at heart – decided to back it. He wasn’t the only one; the project hit its goal in 24 hours, and it wasn’t too hard to see why: a faithful Dirty Dozen re-issue led by a British army veteran. Now that it’s here I can tell you it was money well spent. 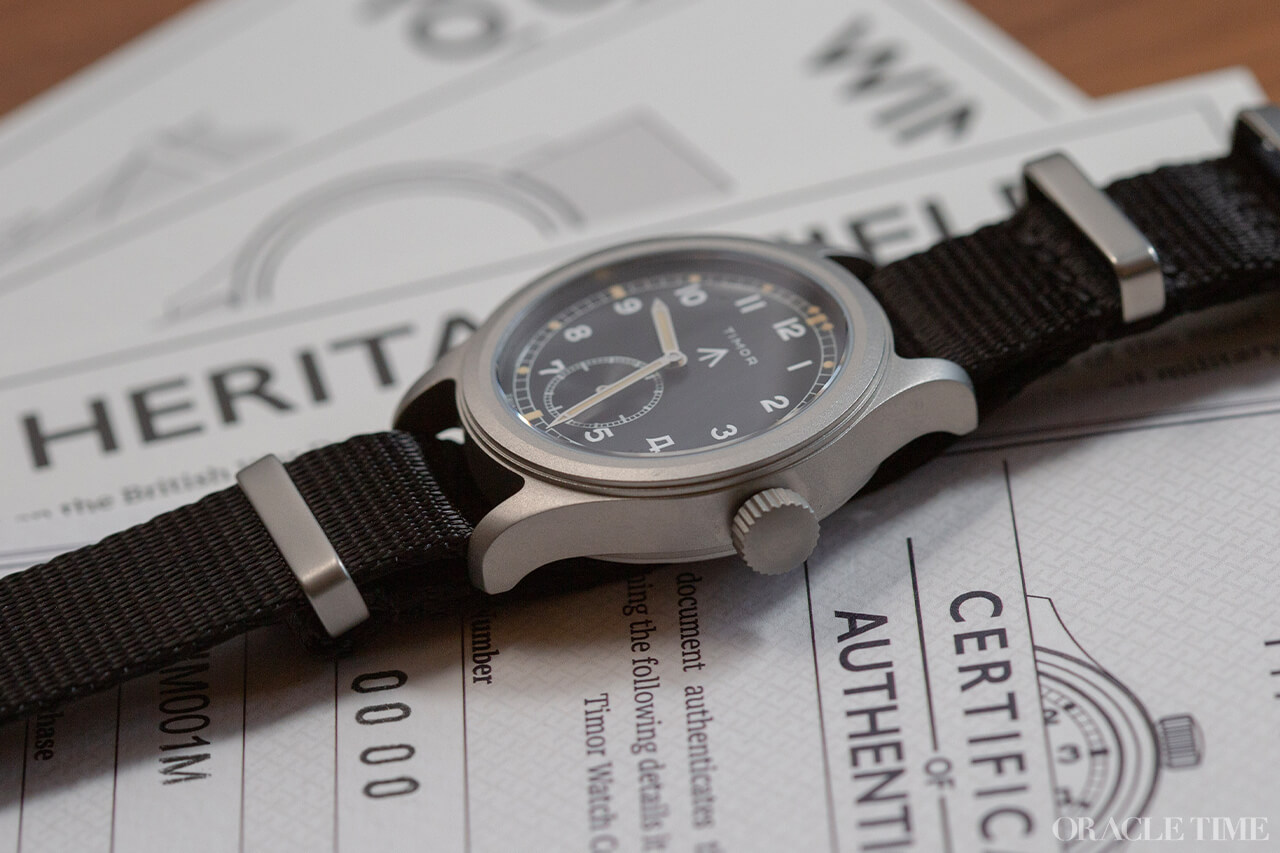 The Timor Heritage Field is incredibly faithful, starting with a charming 36.5mm case. If that sounds small, that’s because it is. While I can just about get away with it, there are plenty of guys out there that’ll dwarf it. Most watch brands in fact would feel like they had to up it, at least to the more normal 38mm. I’m glad Timor didn’t.

The case material itself isn’t exactly vintage though. The bead-blasted steel has a nice gunmetal finish but not what you’d have originally found on a Ministry of Defence watch, where finishing wasn’t exactly a priority. Surviving combat, sure. Looking flawless while doing it? Less so.

The same goes for the caseback; it’s relatively authentic, with simple, engraved branding and serial number, but far smarter than any of the Dirty Dozens before. They looked like they were scrawled by a 3 year-old with a chisel, so that’s not the worst thing in the world. 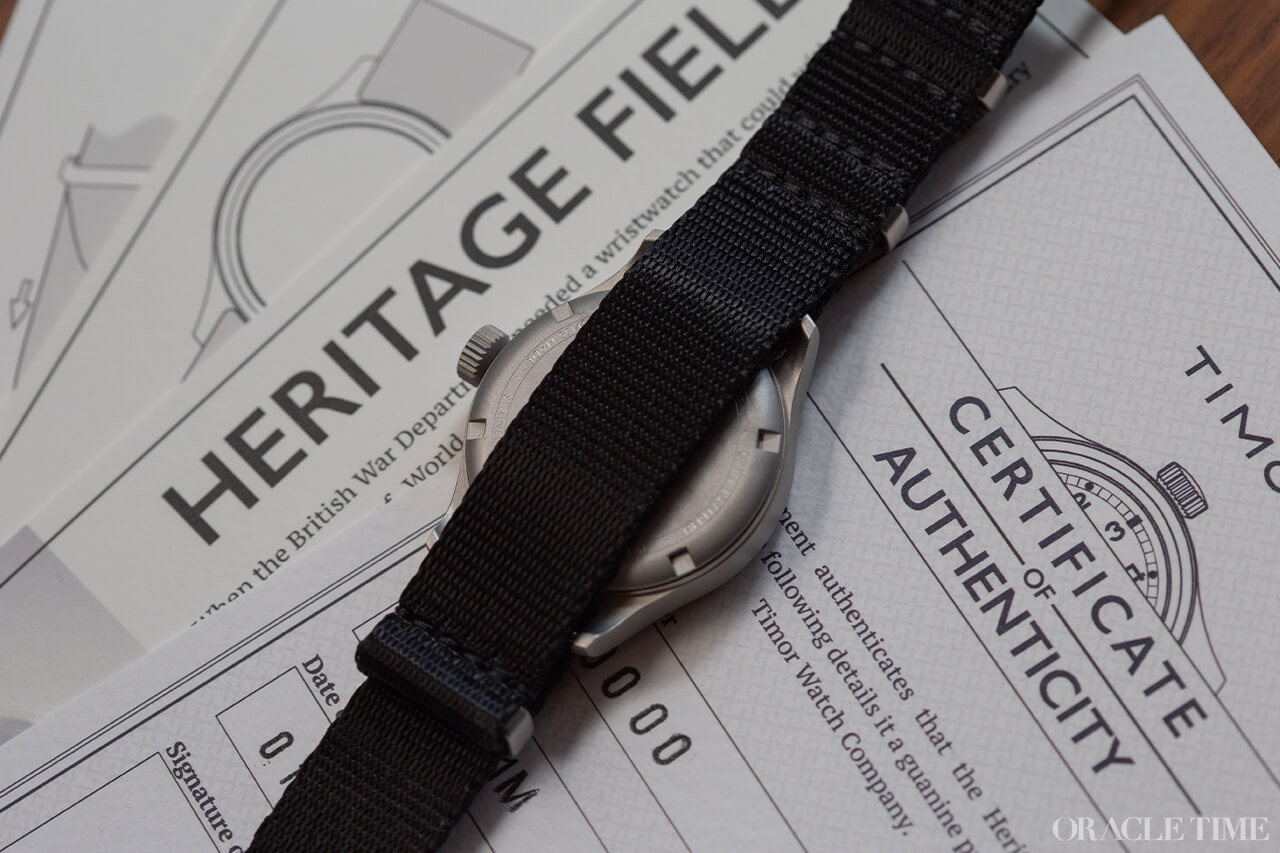 The dial is perfect. The oversized Broad Arrow, the railroad minute track and small seconds, everything is proportioned to fit the diminutive case size and retain readability, right down to the iron sights at 12 o’clock. Throw in some retro beige lume and it’s the bead-blasted twin of the original.

There’s a choice of two movements, depending on quite how horologically faithful you want it to be. You have either the hand-wound SW216 or the automatic SW260, both from Sellita. Both have the same 38-hour power reserve and visually there are no differences between the two, so you don’t need to worry about specs, just which feel you’d like. We have the automatic here, but like I said, you wouldn’t know. 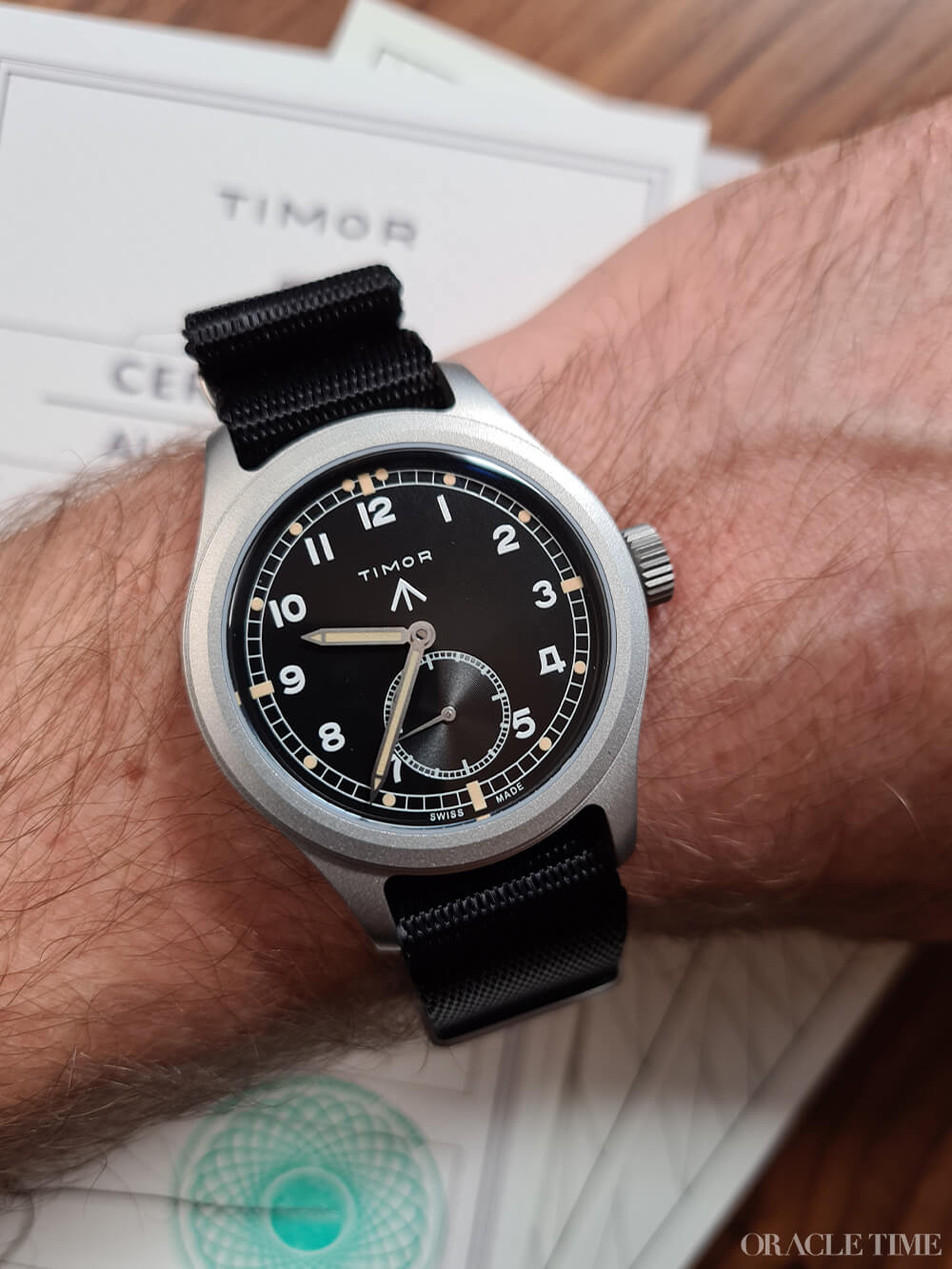 On the wrist the Timor Field Heritage feels small and lightweight, obviously. It’d need to be made of tungsten to feel anything else. The black NATO strap it comes with is incredibly comfortable, though personally I think it suits the Heritage strap better, and not just because the original wouldn’t have known what a NATO strap was. I’m just not a big a fan of over-and-unders as some people. 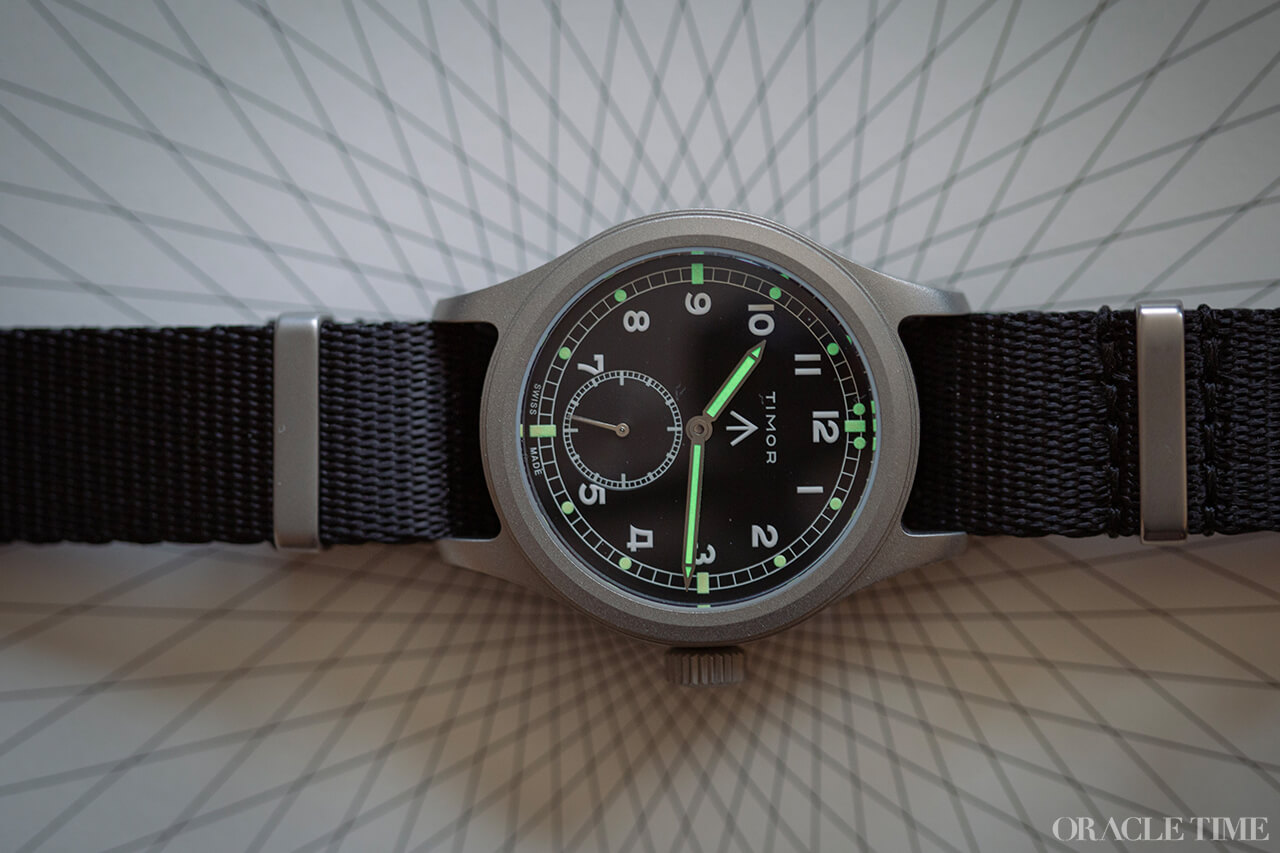 The clinch for me though is the price. The only other vaguely authentic option out there is Vertex, who has much the same history as Timor. But where Vertex has smoothed the edges and upped the size for a more modern, elegant interpretation – think more London members club than British military – the Timor is faithful to its roots, with an accessible price to match: £910.

The watch is made in batches of 300 each year, so there’s a small chance that you’ll need to wait for one. No matter how you look at it though, it’s worth that wait.