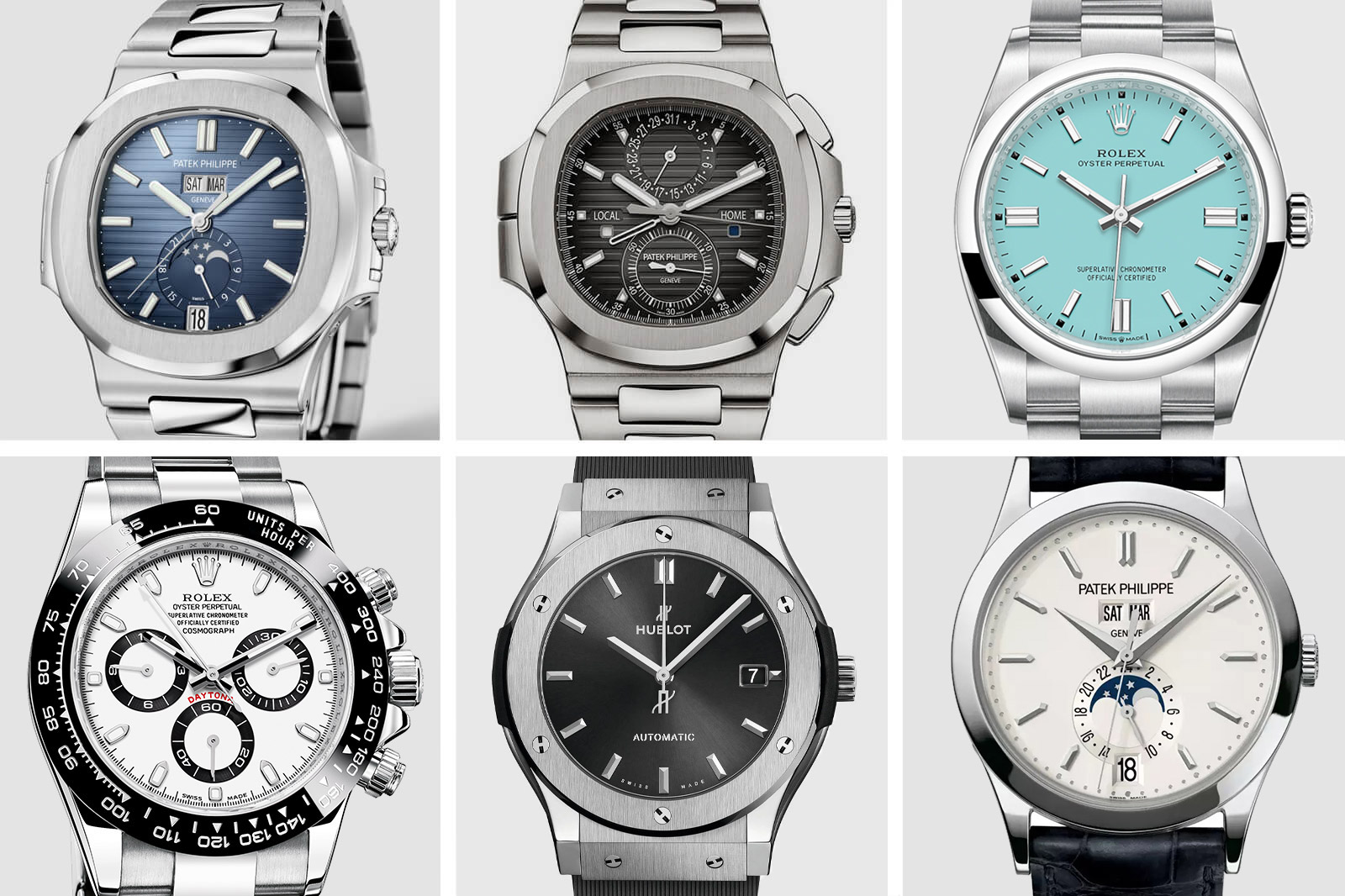 We all know that football players love to flash the wrist candy. Who else buys Hublot anyway? But what of the guys that are actually in charge, the decision makers in the dugouts, dictating play– shouldn’t they get in on the horological action too? Well, some of them do, in some cases putting their players to shame. From the cool to the outrageous, here are the best Premier League managers and their watches leading the way for their players. 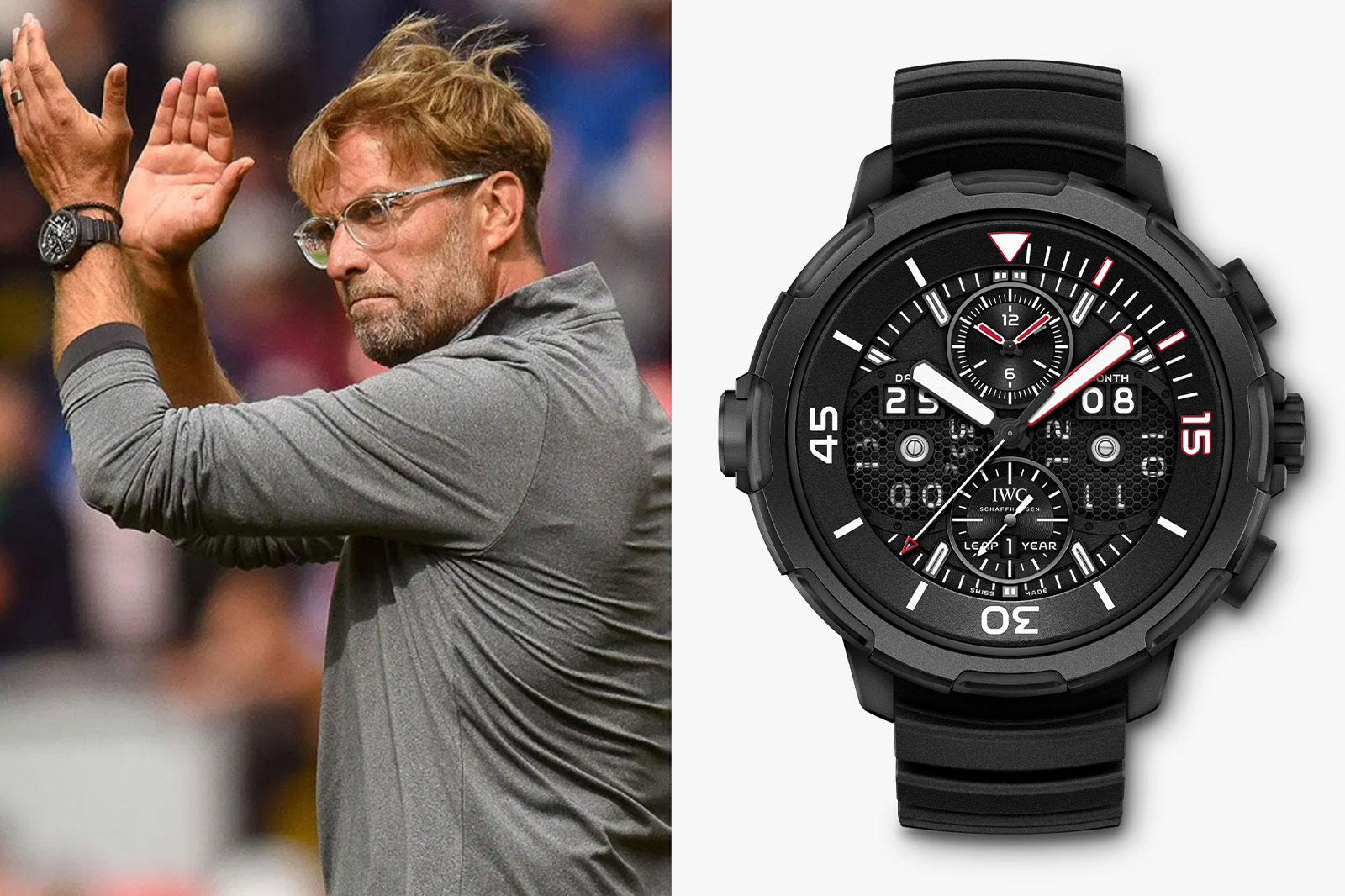 If there’s one Premier League manager that everybody seems to love regardless of your team colours, it’s Jürgen Klopp. The laid back German is an undeniable managerial great that manages to stay humble to his roots on the pitch and on his wrist. He sports an IWC watch. Rather than the usual pilots’ pieces, Klopp opts for the underrated Aquatimer, specifically the Perpetual Calendar Digitate Date-Month Edition “50 Years Aquatimer”. It’s not the most catchy name, but the black Ceratanium – a fusion of ceramic and titanium – case is hard to miss. 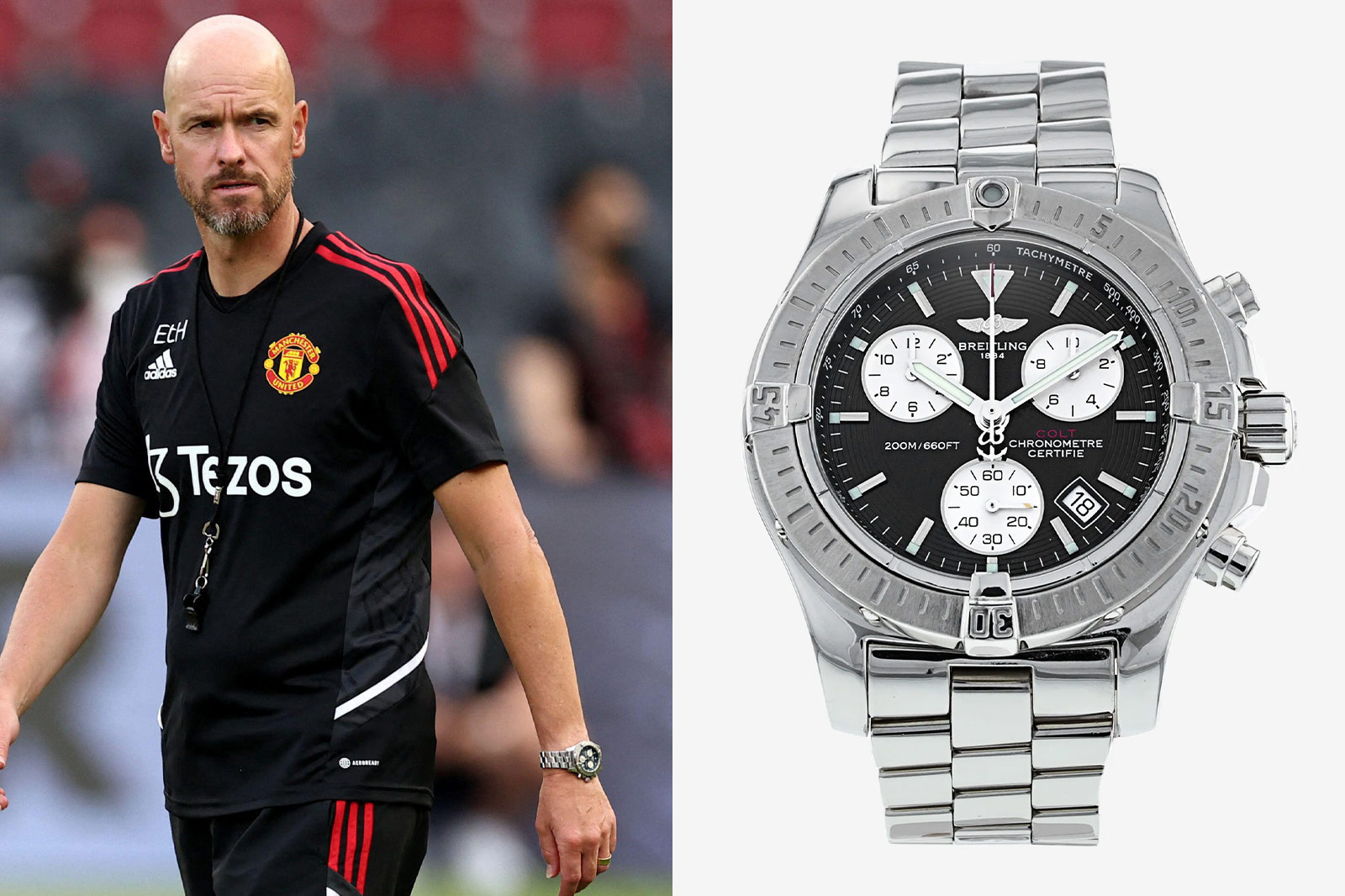 Erik ten Hag has the unenviable position of stewarding Man United through their biggest rough patch in recent history during the Premier League. Since the departure of Sir Alex Fergusson, the team has failed to find its footing despite several big name players on the squad. Erik ten Hag will need to be brutally practical if he wants to navigate the season, but judging by his watch, he can be. It’s the Breitling Colt Quartz, a relatively accessible chronograph that he’s worn for years. The modern Breitling equivalent would be the Chronomat, sporty, steel and uncompromising. 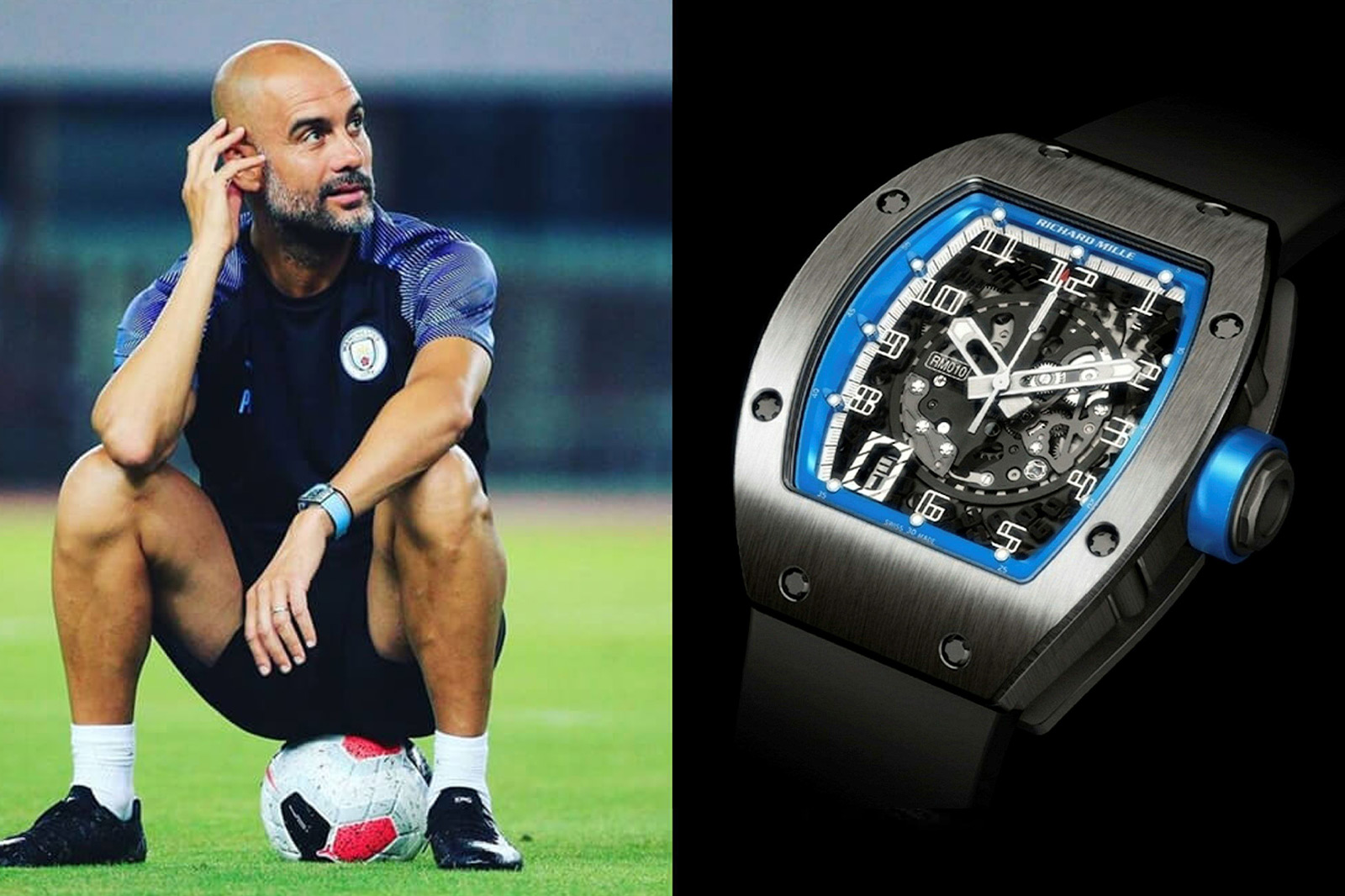 Given their recent success, you can understand why Man City manager Pep Guardiola is more than happy to sport his team’s colours. His RM010 Automatic AMC Blue, aside from being a serious piece of wrist candy, has a bezel and strap which are a perfect match for his players’ sky blue jerseys, the latest watch in his longstanding partnership with Richard Mille. Sure, they like to place their watches on the wrists of players to prove their lightness and nigh-indestructibility, but surely some animated arm waving from the side line counts too?

In fact, Pep’s collection is so spectacular that we took a closer look here. 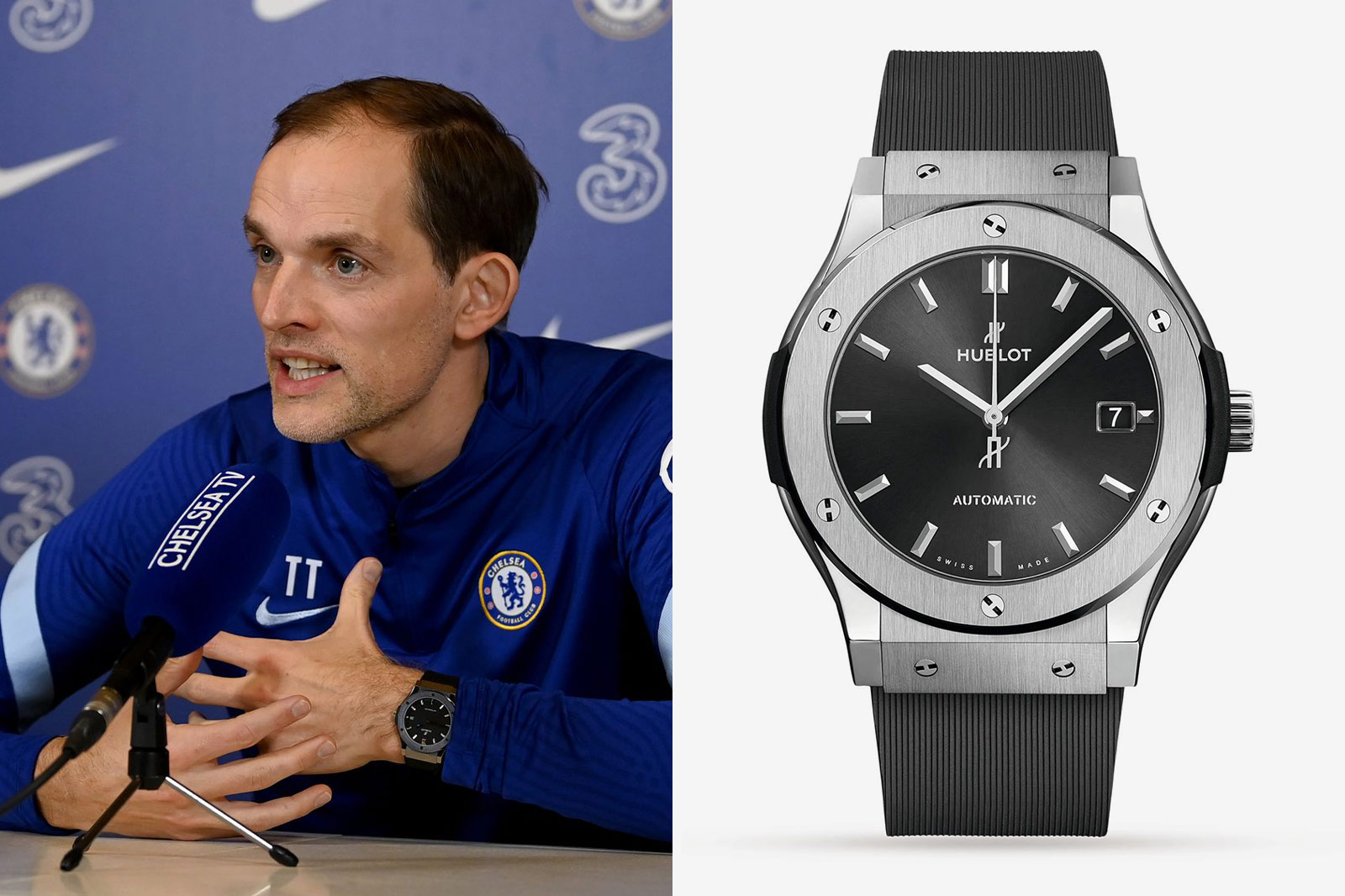 Sometimes a team’s sponsors have sway over the watches worn by the team’s representatives during matches and sometimes that sponsor happens to be Hublot. When he stepped into the manager role at Chelsea in 2021, Thomas Tuchel was immediately gifted with a Hublot and has stuck with them since. Hublot gets somewhat of a bad rep for being the “footballer” watch but Tuchel does himself proud by wearing what is the coolest watch Hublot produce, the Classic Fusion. He’s been spotted wearing the 45mm titanium version and the stealthy all black Magic Black edition. 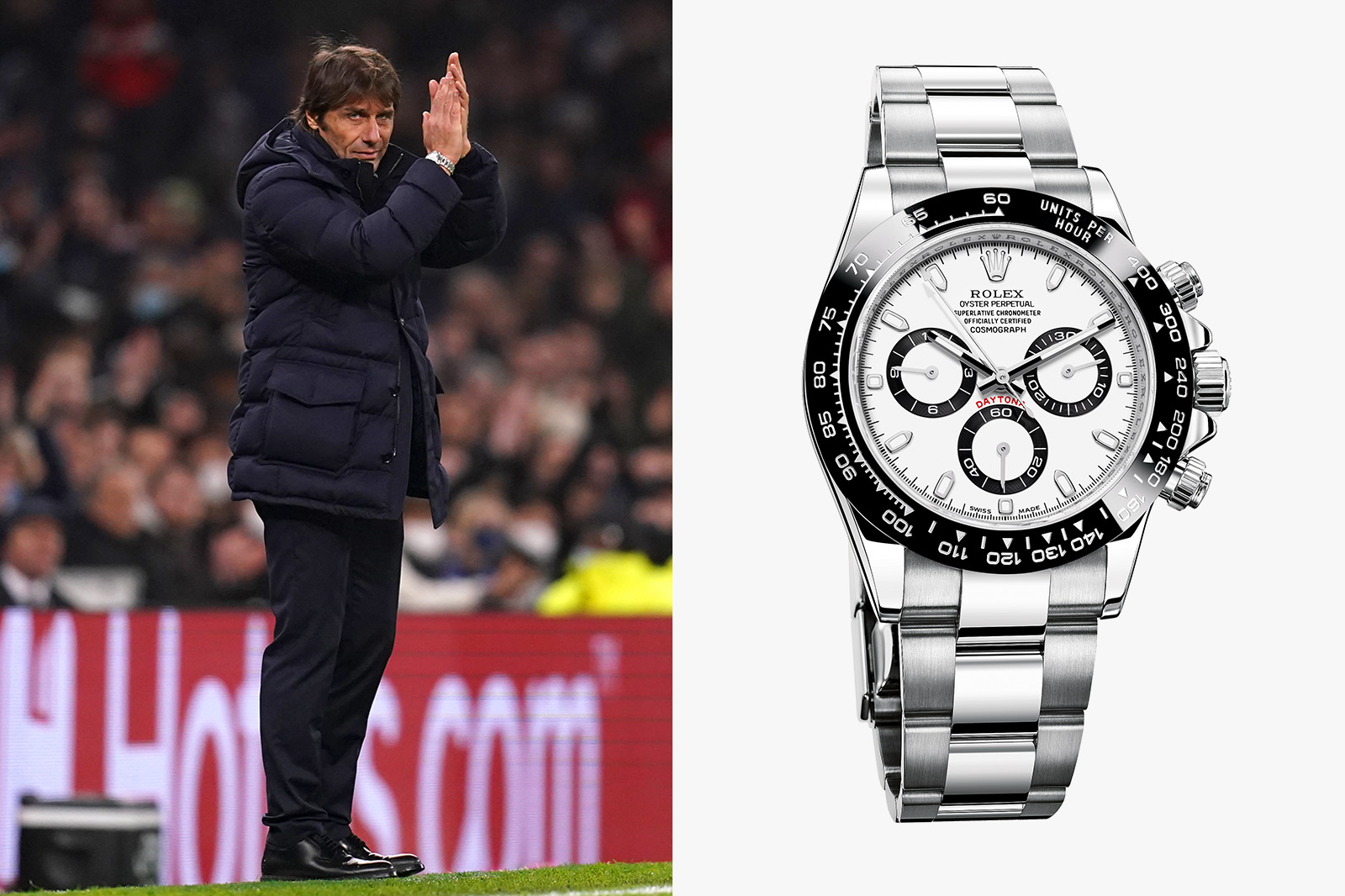 Currently available on the second-hand market for around £30k Conte has likely made a nice profit having been pictured with it all the way back in 2011. Here’s hoping to some Spurs success so he can get himself an upgrade, though he hasn’t left himself many places to go. 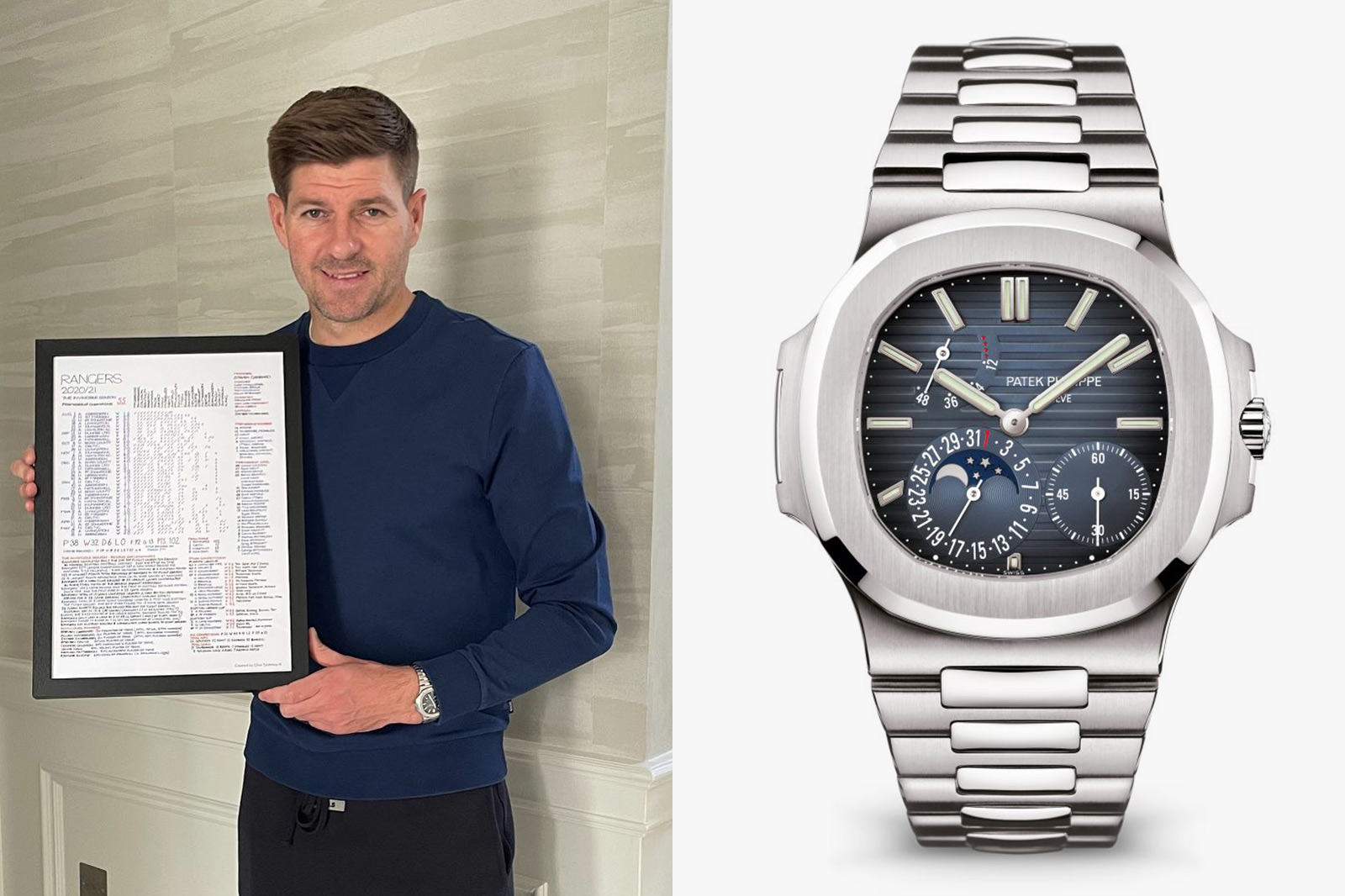 The England legend and Aston Villa Manager might be best known for wearing an Apple Watch, which let’s be honest is far more of a sensible choice for a football match than any other watch here, but that’s not to say has doesn’t enjoy high-end pieces of horology. Namely, the Nautilus 5712/1A-001, a blue dialled moonphase in stainless steel. Considering it bears such similarity to the legendary 5711 the allure is obvious. Plus, it houses the calibre 240 PS IRM C LU which has a 48-hour power reserve and moonphase complication, arguably the least practical of any complication showing that Gerrard isn’t all business. 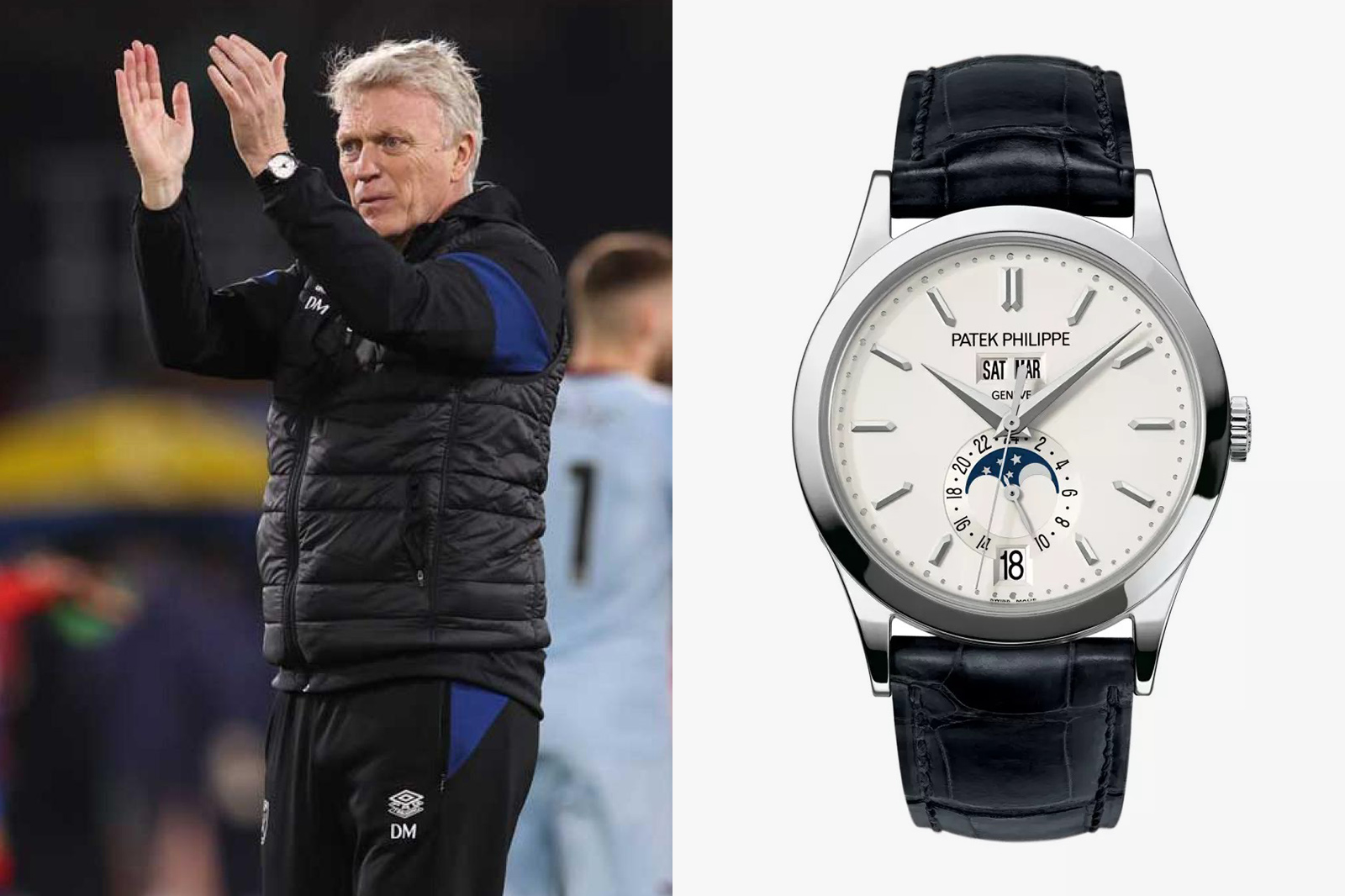 Given his reputation Scottish manager David Moyes, currently at West Ham, might not be the first person in football you’d look to for some horological flair but his wrist game is surprisingly on point. Instead of the endless procession of Nautli we’ve seen so far, he’s opted for a Patek Philippe of an altogether different speed. The Annual Calendar Moonphase in white gold. It’s far more elegant with a classic circular case measuring 38.5mm in diameter. 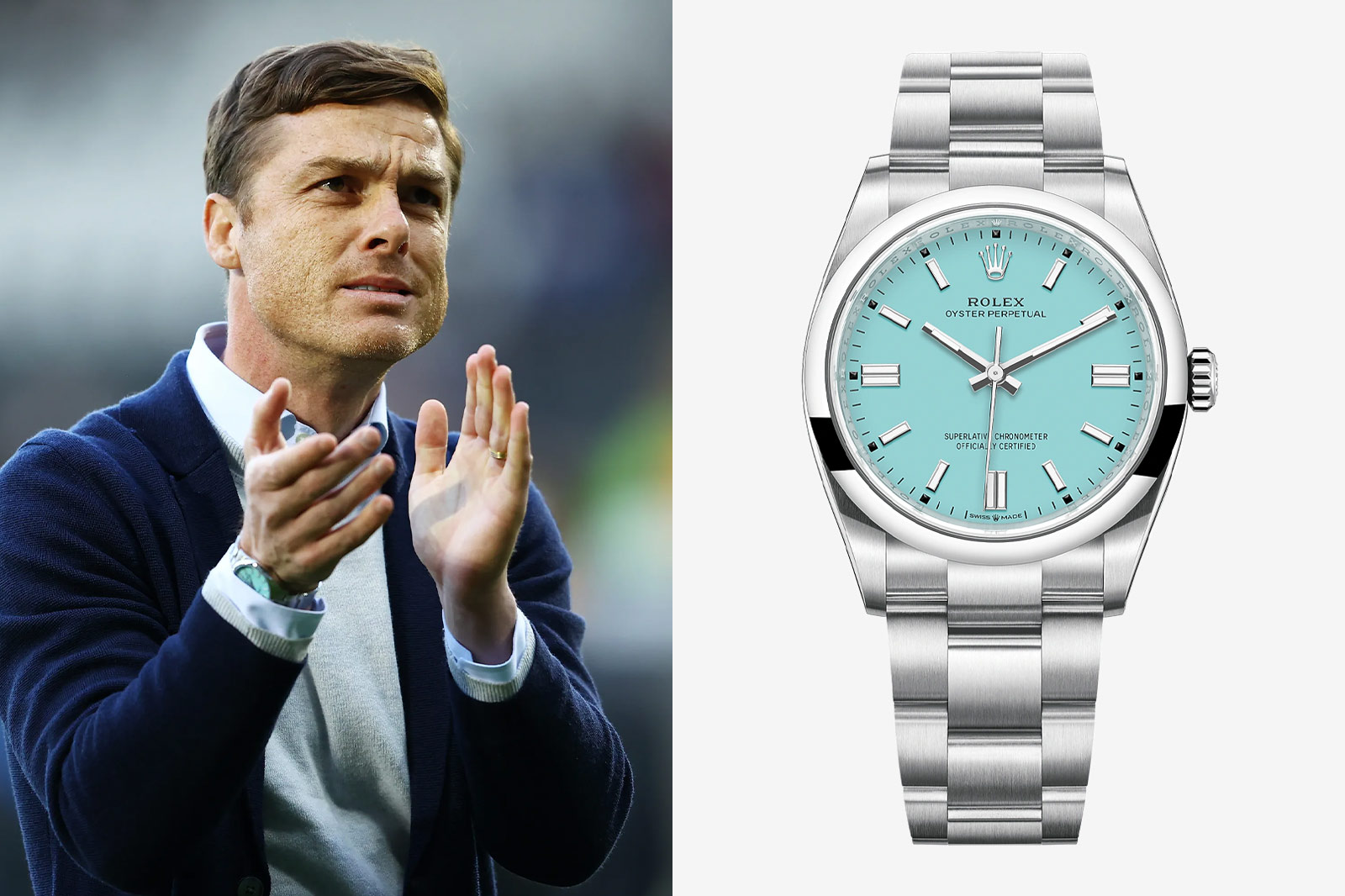 Scott Parker is one of the snappiest dressers out of all the Premier League managers. The Bournemouth manager wears his suits with the same ease and comfort as he might some athleisure wear. His elegant style is complimented by his choice of watches, which can lean towards the more traditional high end sports watches but also includes the highly sought after Rolex Oyster Perpetual in tiffany blue. The time only watch with turquoise dial is an expression of refined elegance and character that pairs perfectly with Parker’s preferred styles. 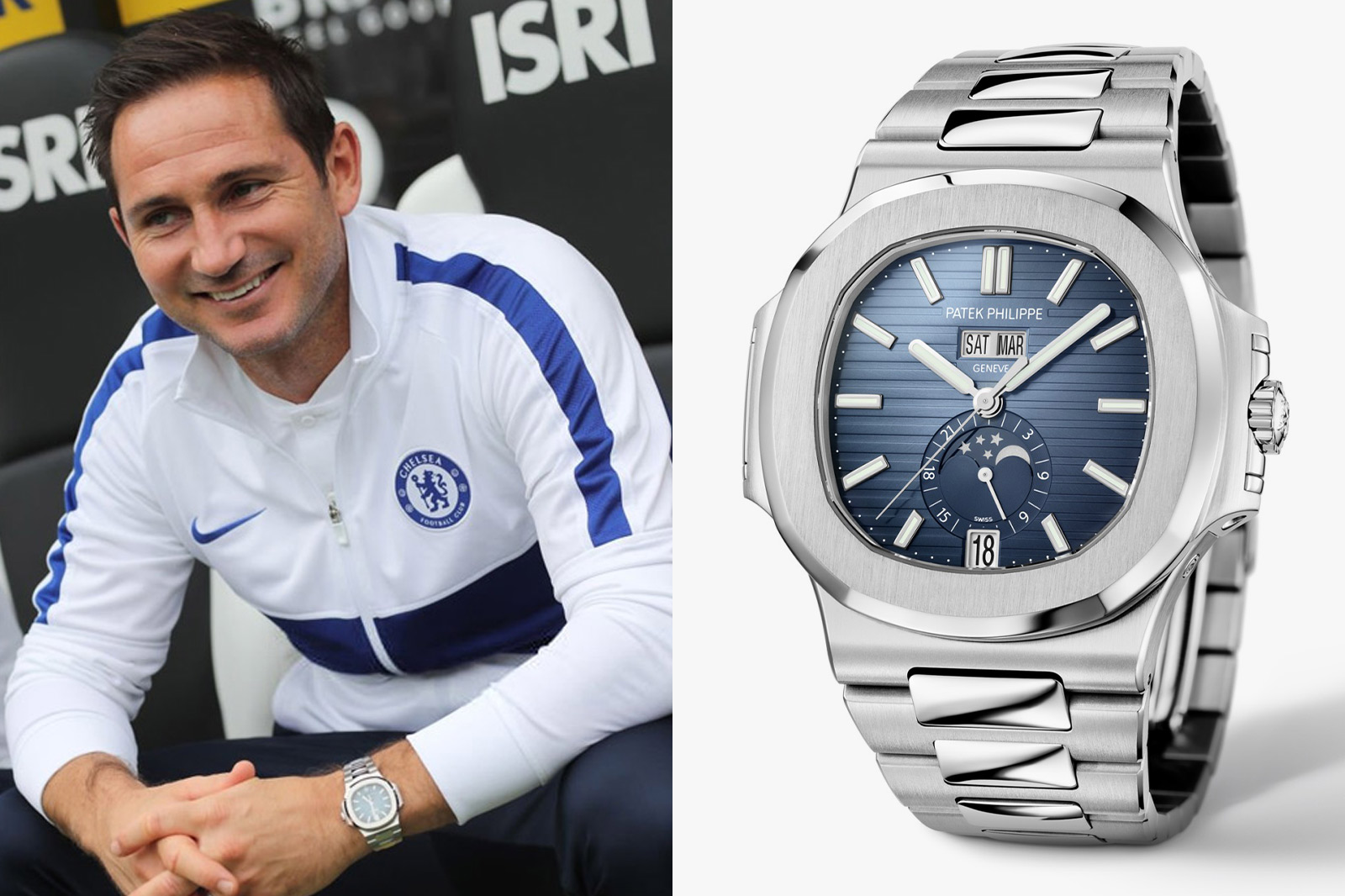 Frank Lampard is a veteran when it comes to his watches, showing off a Richard Mille in the past. Still, it’s Patek that’s his one, true horological love and the ex-Chelsea star causes ripples in the Premier League wrist game with the Nautilus Reference 5726 Annual Calendar.

It’s not got quite the waiting list as it’s time-only sibling but then that’s one of the most popular watches ever made. Frank Lampard has prior of course, previously seen wearing the extravagant white gold Nauti chronograph and the cool, orange-handed Aquanaut chrono, but as far as we’re concerned his most recent is his best. Here’s hoping his managerial decisions prove as great as his horological ones. 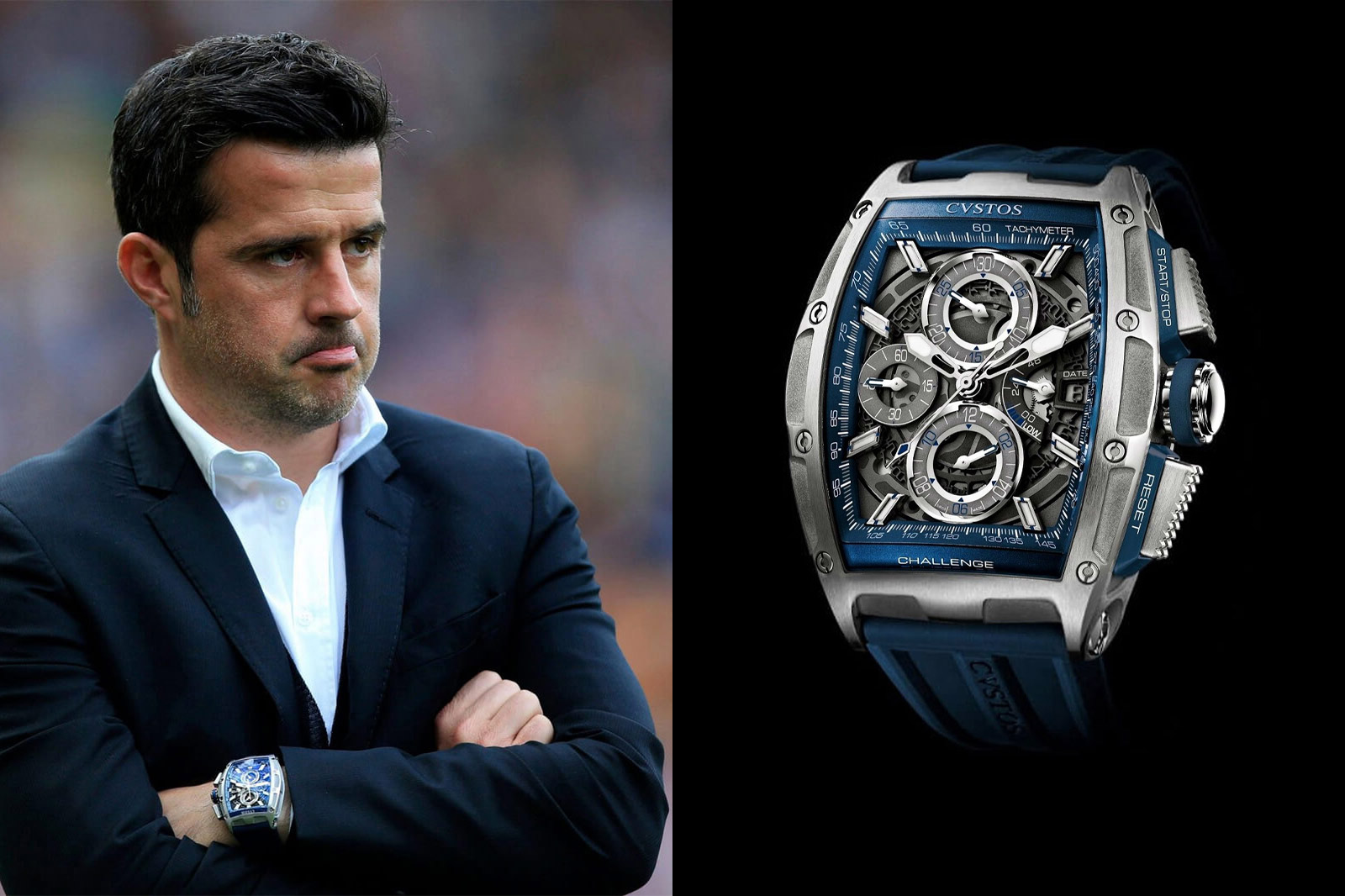 Back in 2018 the then Everton manager Marco Silva became an ambassador for Swiss watchmaker Cvstos. In fact, we interviewed Silva about becoming a watch ambassador at the time, which you can read here. Four years later he continues to champion Cvstos watches although now in his capacity as manager for Fulham. He wears watches from their sporty chronograph collection like the Challenge Chrono II with a large tonneau case and skeletonised display.