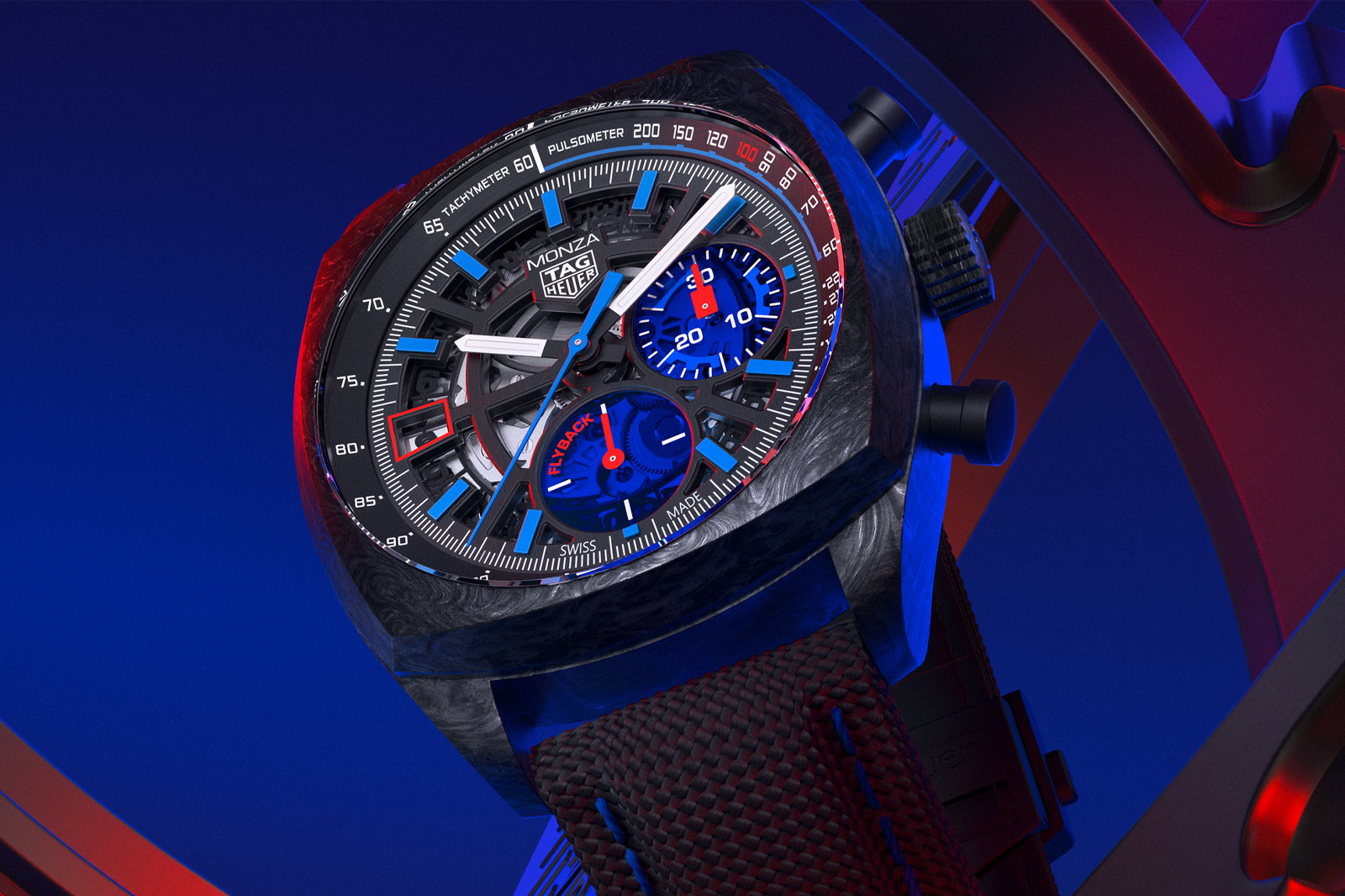 In Tag Heuer’s extensive catalogue of chronographs, a name that doesn’t come up all that often is the Monza. The design was originally launched in 1976 to celebrate Ferrari winning the F1 World Championship with Niki Lauda (Tag Heuer were their timing partner at the time) and is named after the most famous F1 track in Ferrari’s home nation, Monza in Italy. However, since then it has only been an intermittent member of Tag’s range, unlike staples such as the Carrera which is celebrating its 60th anniversary. Now, a new version has emerged, the Monza Flyback Chronometer in forged carbon.

Personally, I’m a big fan of the way Tag Heuer is willing to explore different shaped watches: the Carrera is round, the Monaco is square, the Aquaracer is octagonal and the Monza is cushion shaped. Cushion watches are essentially square with curved outer edges that give the piece a softer appearance and larger surface areas, well suited for showcasing the unique patterns of forged carbon, especially at 42mm. Carbon is an incredibly lightweight and scratch resistant material, ideal for sports watches like this chronograph. 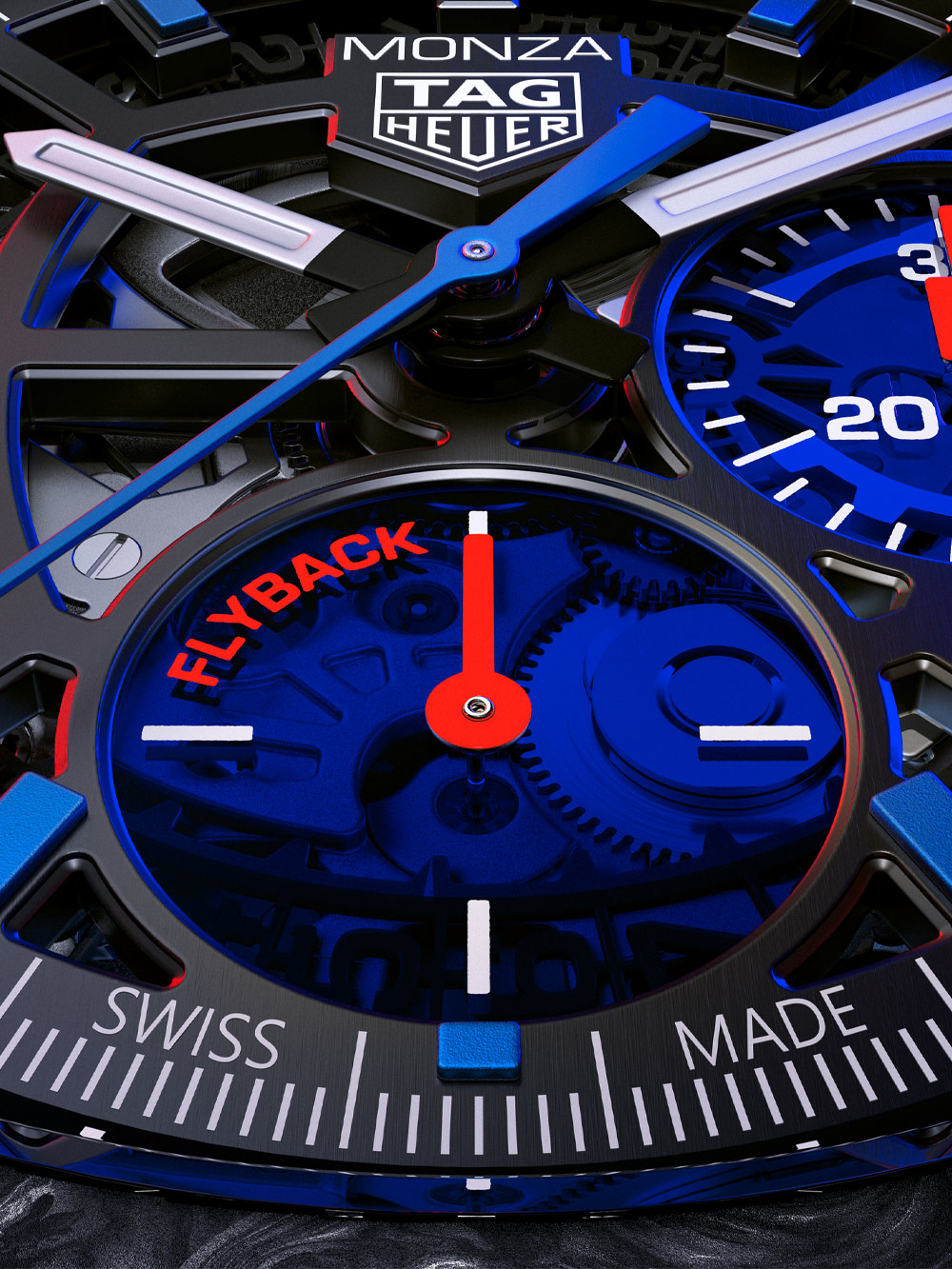 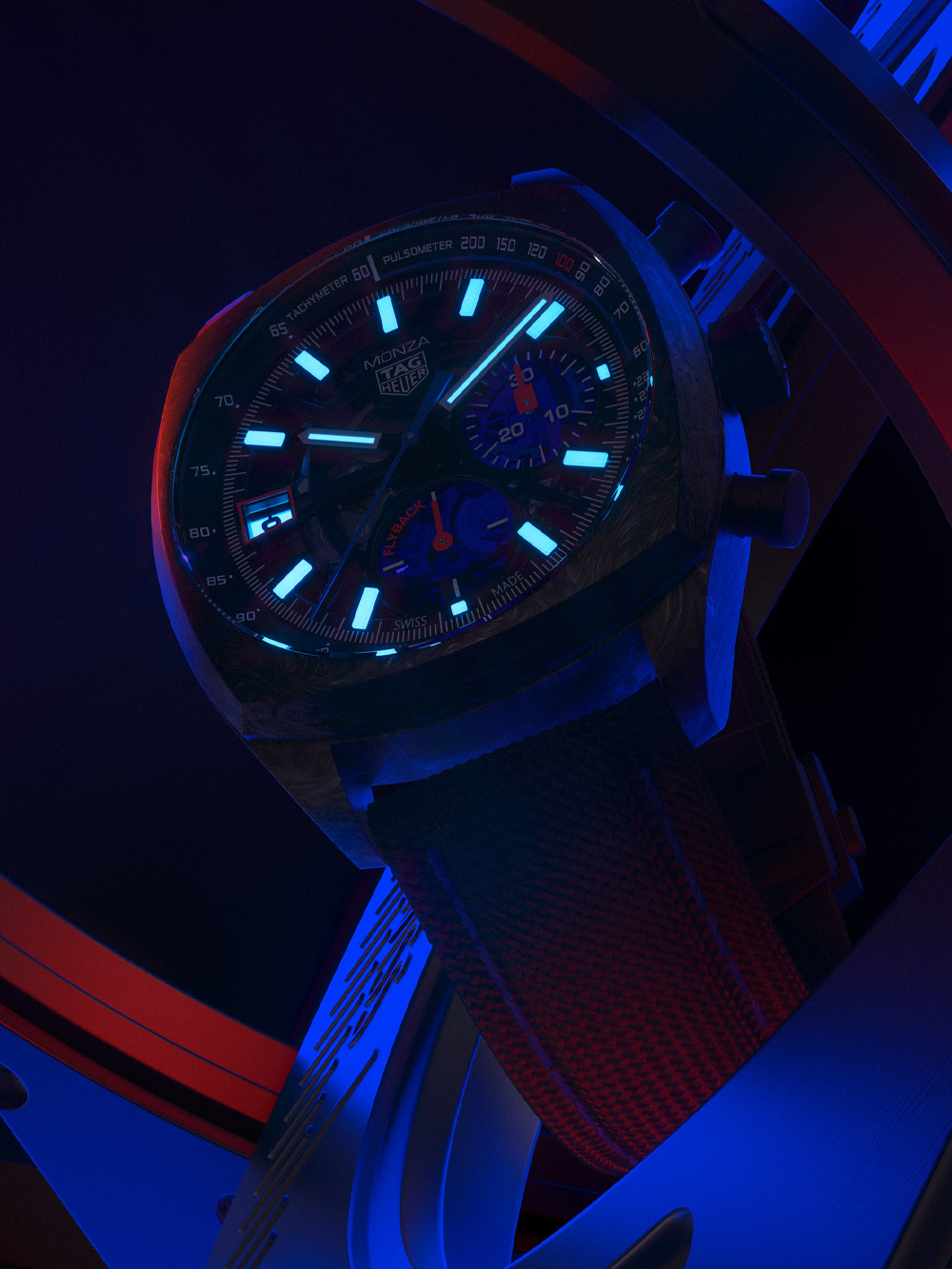 Speaking of it being a chronograph, it has a fairly unusual chronograph display. Specifically in the fact that it has an asymmetrical layout with a 30-minute timer at 3 o’clock, small seconds subdial at 6 and a date window at 9. It’s not the traditional bicompax or tricompax display that Tag Heuer typically use. I don’t dislike this dial layout because the Monza has always been slightly off-kilter with the original having one of its subdials positioned at 10 o’clock. 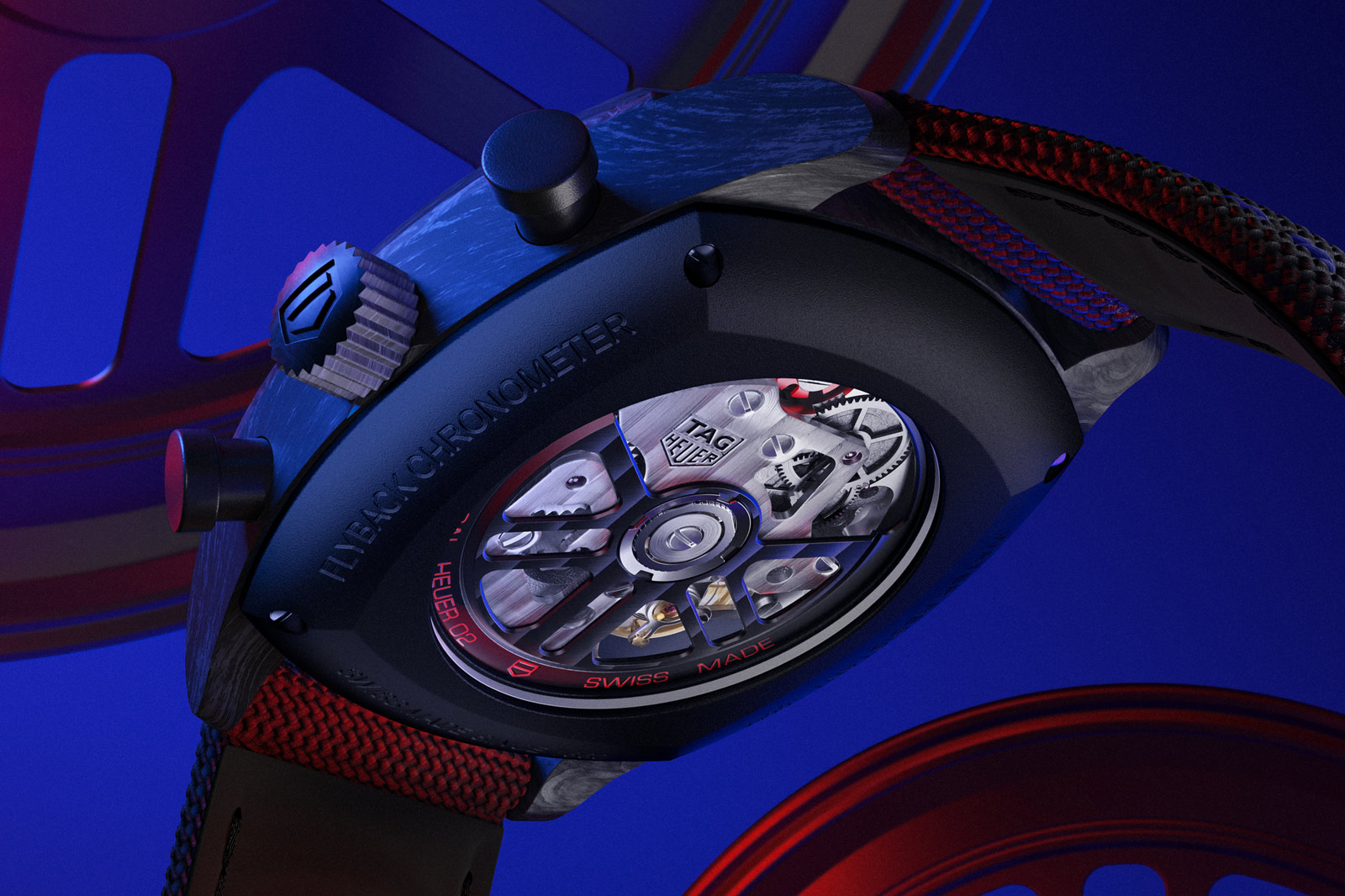 Through all this I’ve neglected to mention that the dial is actually a skeleton design, showing the Calibre Heuer 02 working away. The subdial are even made from blue sapphire crystal so that they don’t obscure too much of the movement. And what a movement it is, rocking a superb 80-hour power reserve and featuring a flyback chronograph function that allows the central chronograph hand to be stopped, reset and started again with a single pusher press. On top of that it’s COSC chronometer certified, ensuring reliability and accuracy. 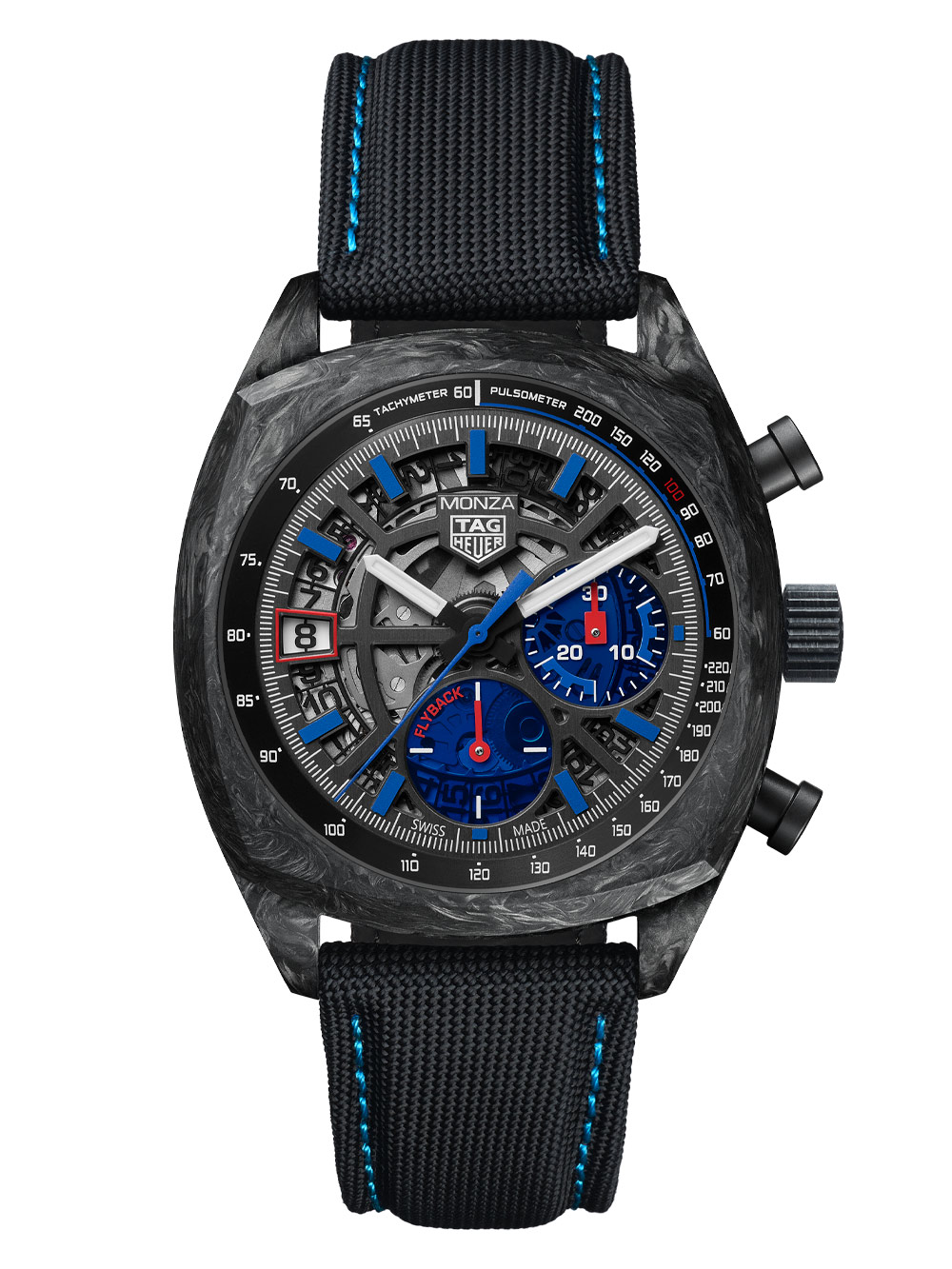 While the Tag Heuer Monza Flyback Chronometer technically plays second fiddle to the Carrera 60th Anniversary in terms of big name watches that are likely to stoke the flames of collector’s desires, it would be a real shame for it to fly under the radar. I’ve always been more conservative in my watch tastes (when I talk about collector’s desires for the Carrera, I’m talking about myself) and a forged carbon skeleton is not something I’d ever buy, but if Tag Heuer keep this up they may well change my mind, even at the not inexpensive price of £11,450.