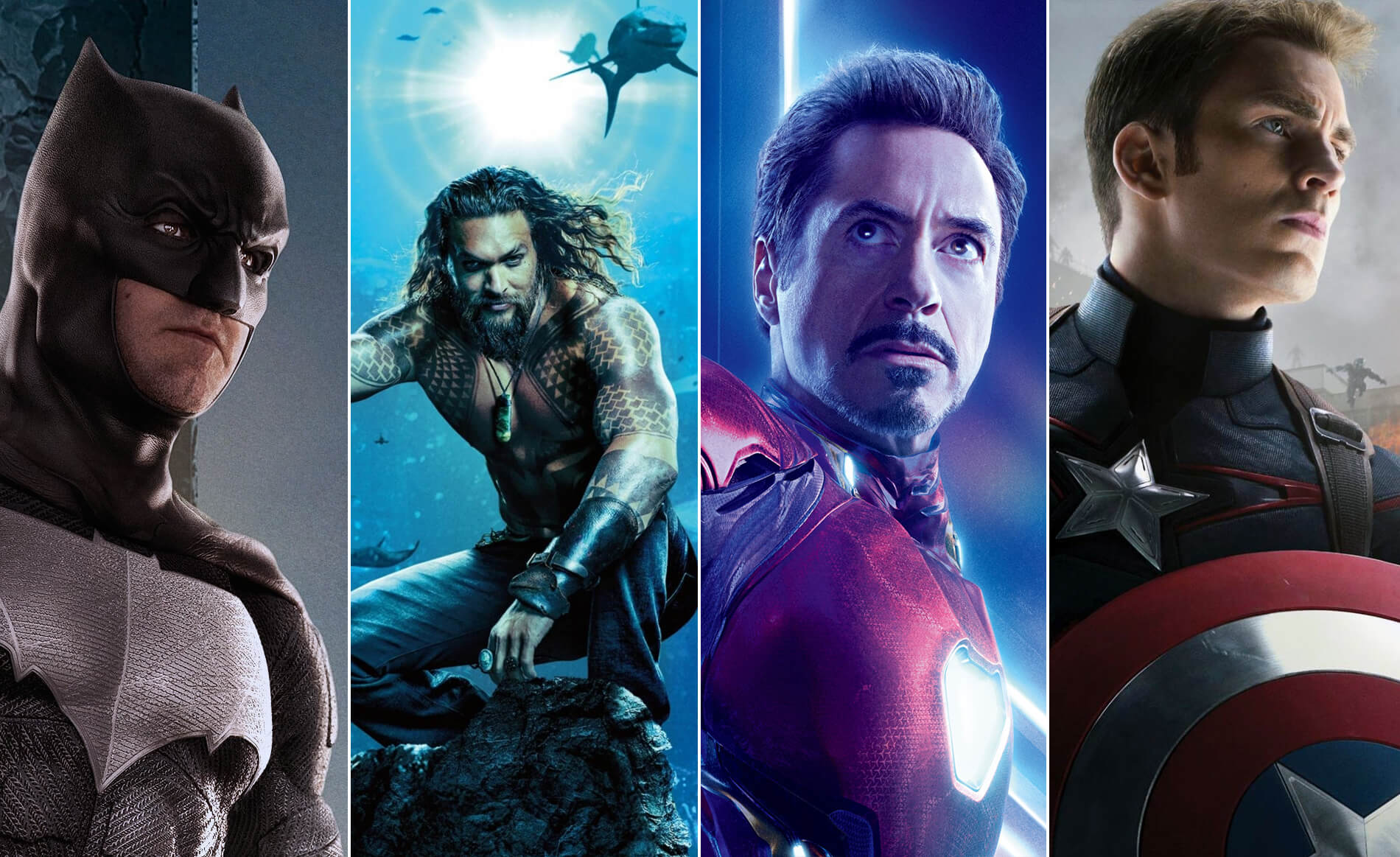 Superheroes can be many things: stoic, just, powerful. Just not late. Every hero with powers shy of omniscience needs to know the time, and therefore needs the perfect watch to accompany them.

There’s only one chance to stop a building from falling, destroying a doomsday laser or rescuing a cat from a tree before it remembers it’s a cat. But then what watches can stand up to the rigours of hero life? And what types of timepieces would suit certain supers? Never fear citizens, for we are here to save the day, one watch at a time. 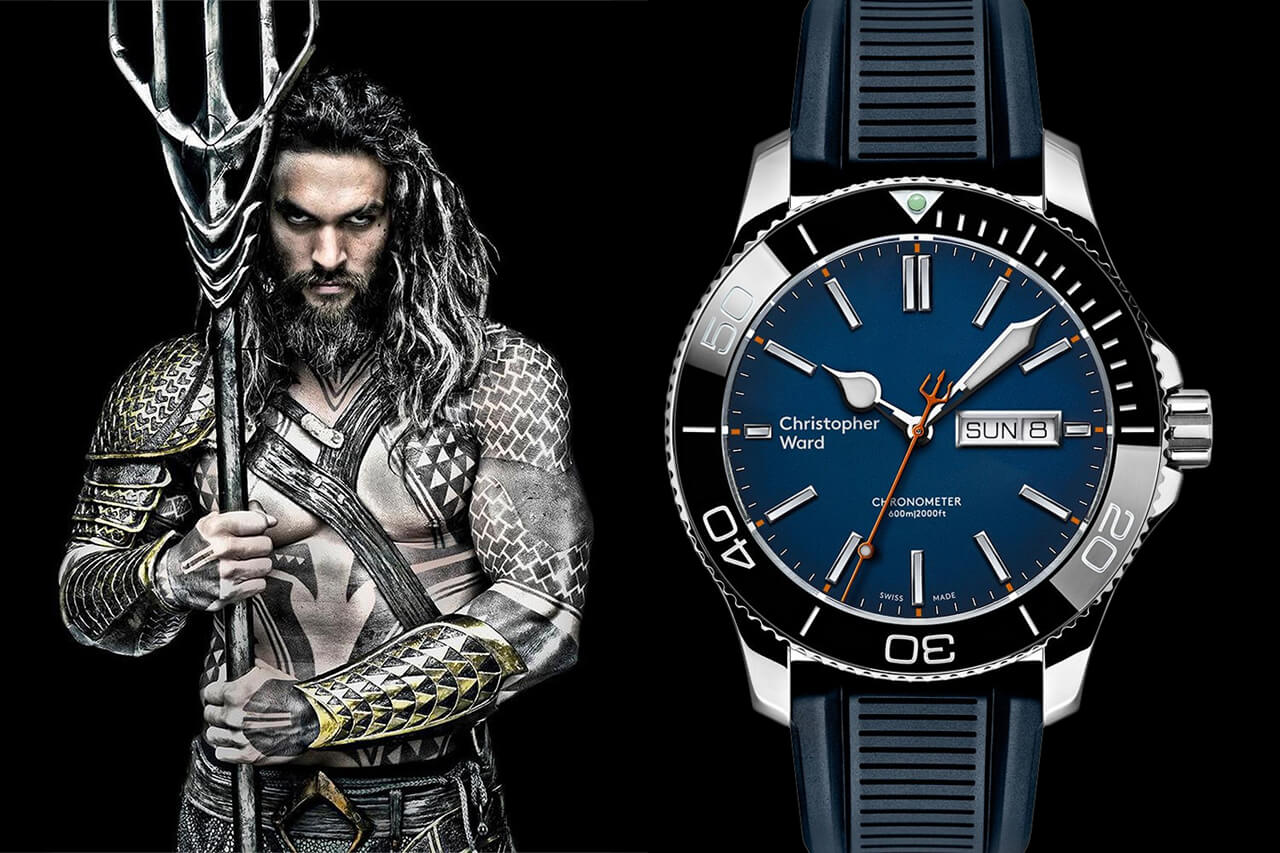 The fact that it’s named after the Atlantean’s weapon of choice is a nice bonus too – as are the orange highlights on both dial and webbing strap that match Aquaman’s less-than-subtle livery perfectly. To round it all off, it’s less than £1,000. I mean come on, this is Aquaman… we doubt he brings in the big hero bucks. 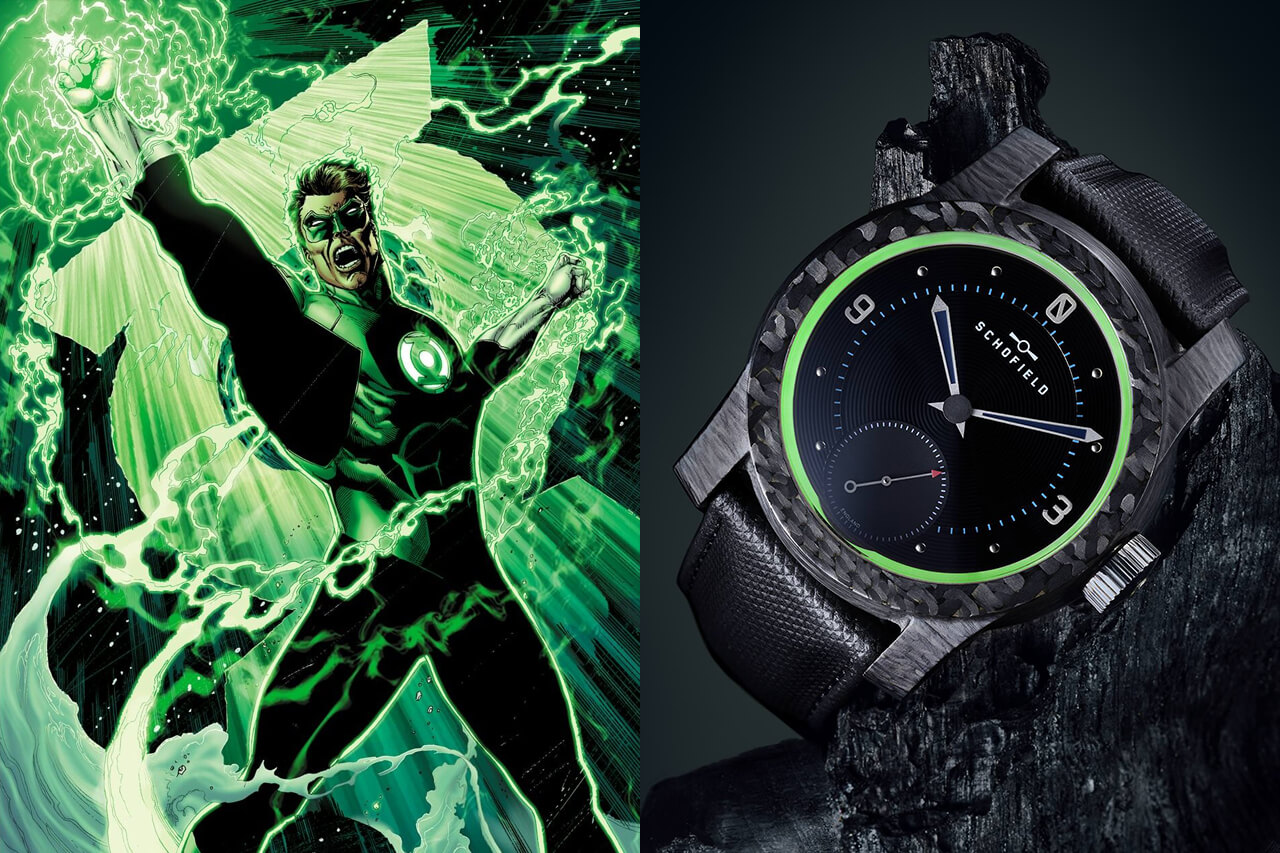 Sure, any of the green lanterns could probably conjure up their own watch, but let’s assume Hal Jordan would want to take a little bit of Earth with him in the form of a more terrestrial timekeeper. Either way, the eerie green light of the Schofield Black Lamp might not come from the cosmic force of willpower, but it looks pretty damn close.

It’s bright enough in face to be read while cruising through the depths of space, though how well it would work on planet Oa who knows? That brightness comes courtesy of the equally cosmically-named Moonglow lume set around the dial. Thanks to the carbon case, the Blacklamp is also light enough to fly with. 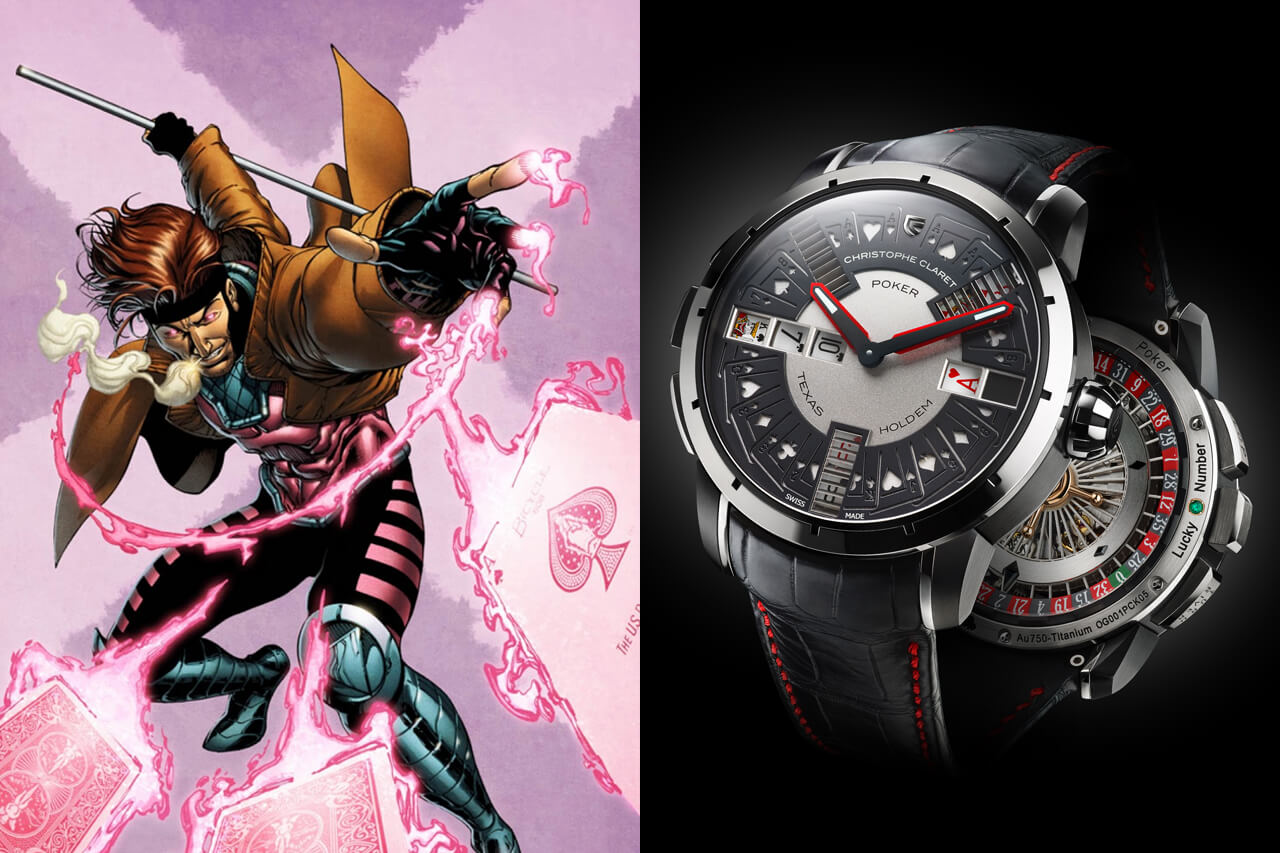 What do you get the Cajun mutant with a penchant for exploding playing cards? The chance to play a round without a single deck of cards in sight. Don’t halt your winning streak simply because you blew up the jack of clubs. Just let Christophe Claret do the dealing.

This isn’t just a poker-themed watch; it genuinely allows you to play a round of Texas Hold’em with up to two other people. At the press of a button three random cards will show the flop, followed by the turn and river on another button. Each player gets their hand and, thanks to slats in the dial, are the only ones that can see them. Oh, don’t explode if the cards treat you badly… there’s always roulette on the back. 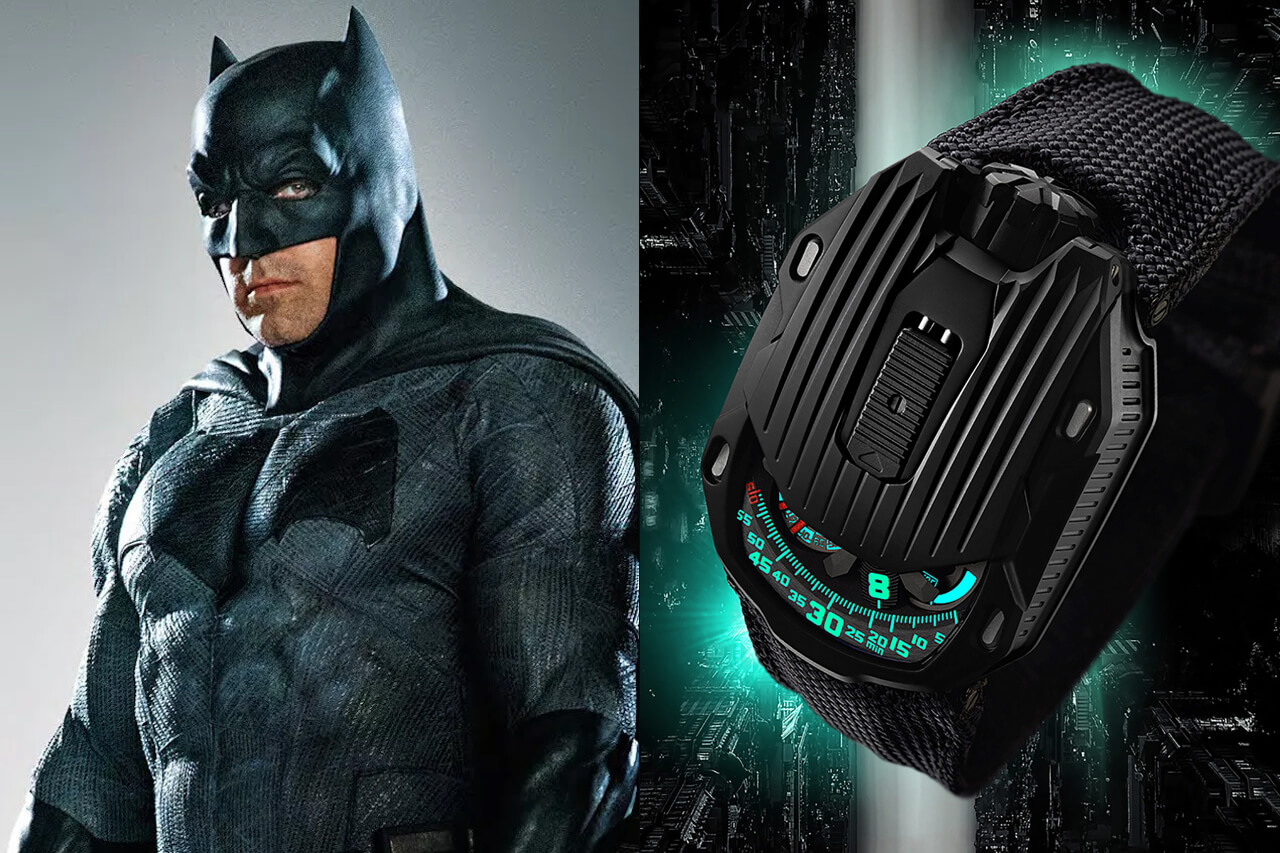 Dark? Check. Brooding? Check. Occasionally very, very dark grey? Check. There’s a good number of Urwerks that could fit Batman’s criteria, but we’ve plumped for one that compliments the Dark Knight’s own armour with a case inspired by that of his ancient counterparts. It doesn’t take the World’s Greatest Detective to see that the shape of Urwerk‘s UR-105 CT is taken directly from that of metal breastplates, given the once over with a hard DLC coating.

This particular model though might be best suited to the Dark Knight Falls (think Batman vs. Superman but good) given that the green of its numerals is named after his rival’s one weakness. And no, I mean Kryptonite, not poor writing.

No watch is going to survive a lightning bolt from the God of Thunder, but at least it can stick close to Thorn’s own Scandinavian origins. Sure, Asgard might in actuality be a realm floating out in space, but it still shared some of the same design influences as Sweden’s Viking-inspired GoS watches.

The Väring for example, named after a particularly famous Viking warlord, not only uses the watchmaker’s signature Damascus steel, but almost weaponises the hands. It’s mix of bronze and steel is striking to say the least which is definitely a good thing for Thor. For him at least, lightning does strike twice. 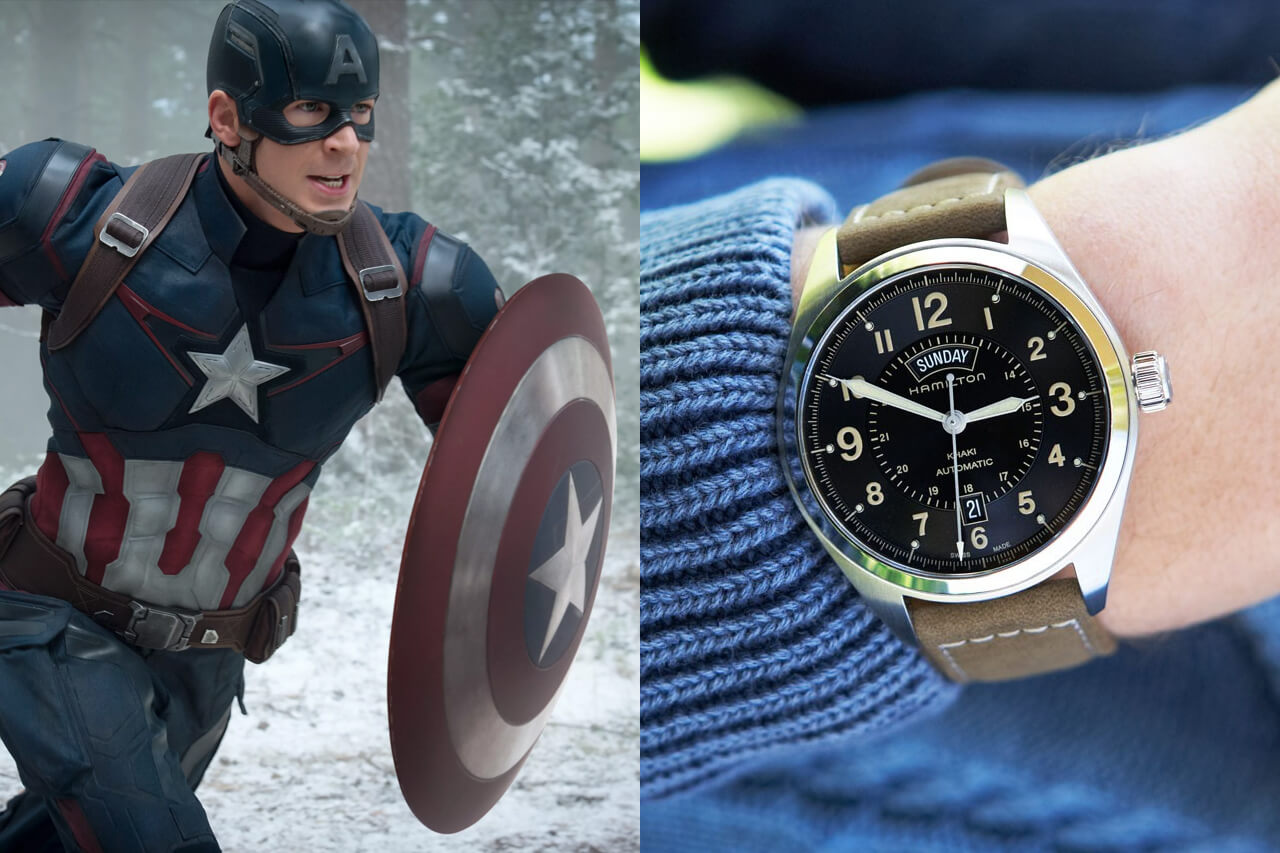 For a man out of time struggling to catch up with everything from Star Trek to any music post 1945, you can’t blame Cap for needing a little touch of horological nostalgia to keep things in check. What better then than a watch he’d have been wearing before he hit the ice? We’re not talking vintage, but one of Hamilton’s WWII military-inspired Khaki Fields.

Based on the shape and style of the ‘watch that won the war’, it’s a simple, rugged watch that can survive a decent beating, even on super soldier wrists. The Day Date Auto makes it a little more complicated, though it’s still nicely stripped back. It’s not the most interesting thing in the world, but then let’s be brutally honest here… neither is Captain America. 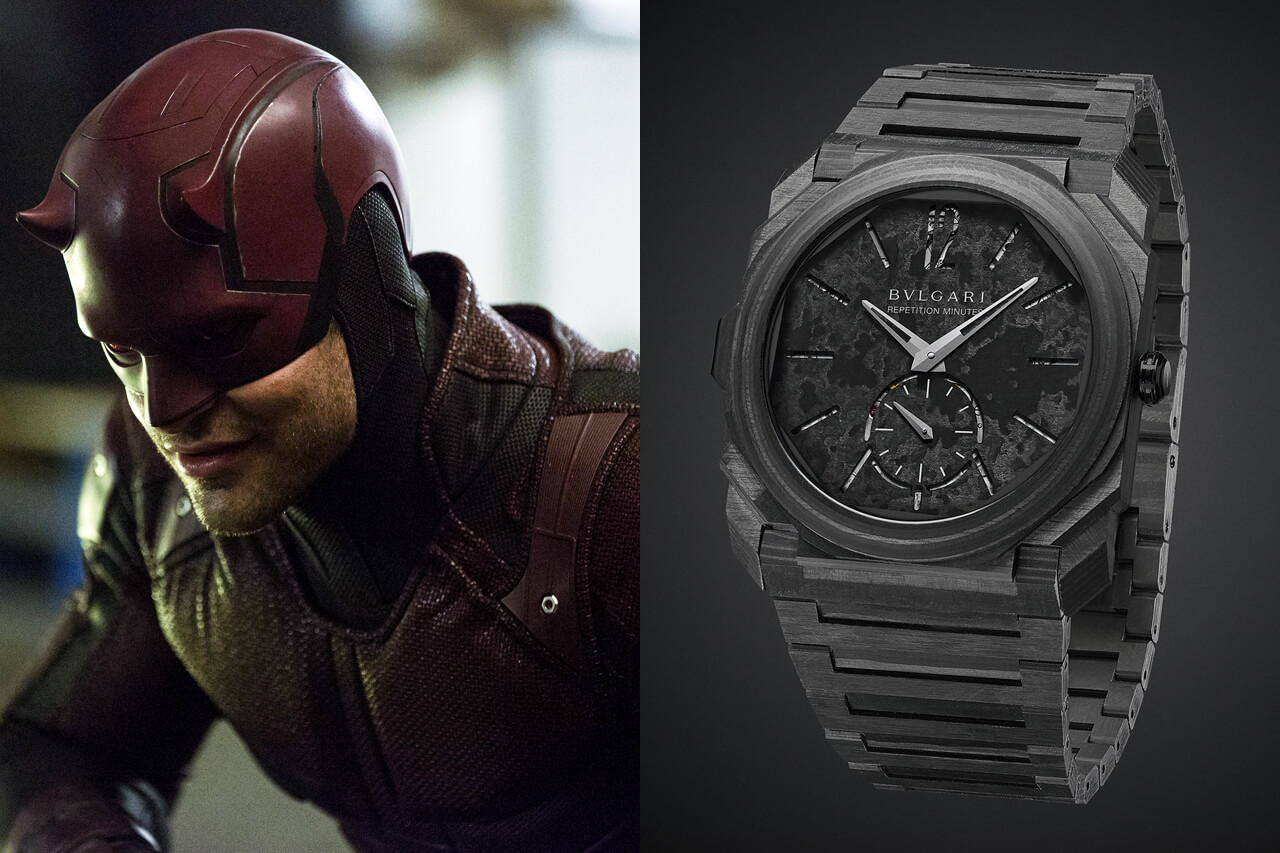 What use does a blind man have for a watch? Not a huge amount unless the Devil of Hell’s Kitchen’s sonar is accurate enough to pick out the hands through the crystal. Not likely, even by comic book standards. Instead, he’s all about sound – which Bulgari’s Finissimo Minute Repeater has plenty of.

At the touch of a button, the ultra-thin movement will chime out the minutes and hours, handily mapping the area out to Daredevil’s senses. The carbon version also happens to be light and stealthy enough for all his ninja needs. He’s just got to be careful; Matt Murdock wearing it in court might raise a few eyebrows. I don’t mean because he’s blind. Where the devil did a public defender get the money? 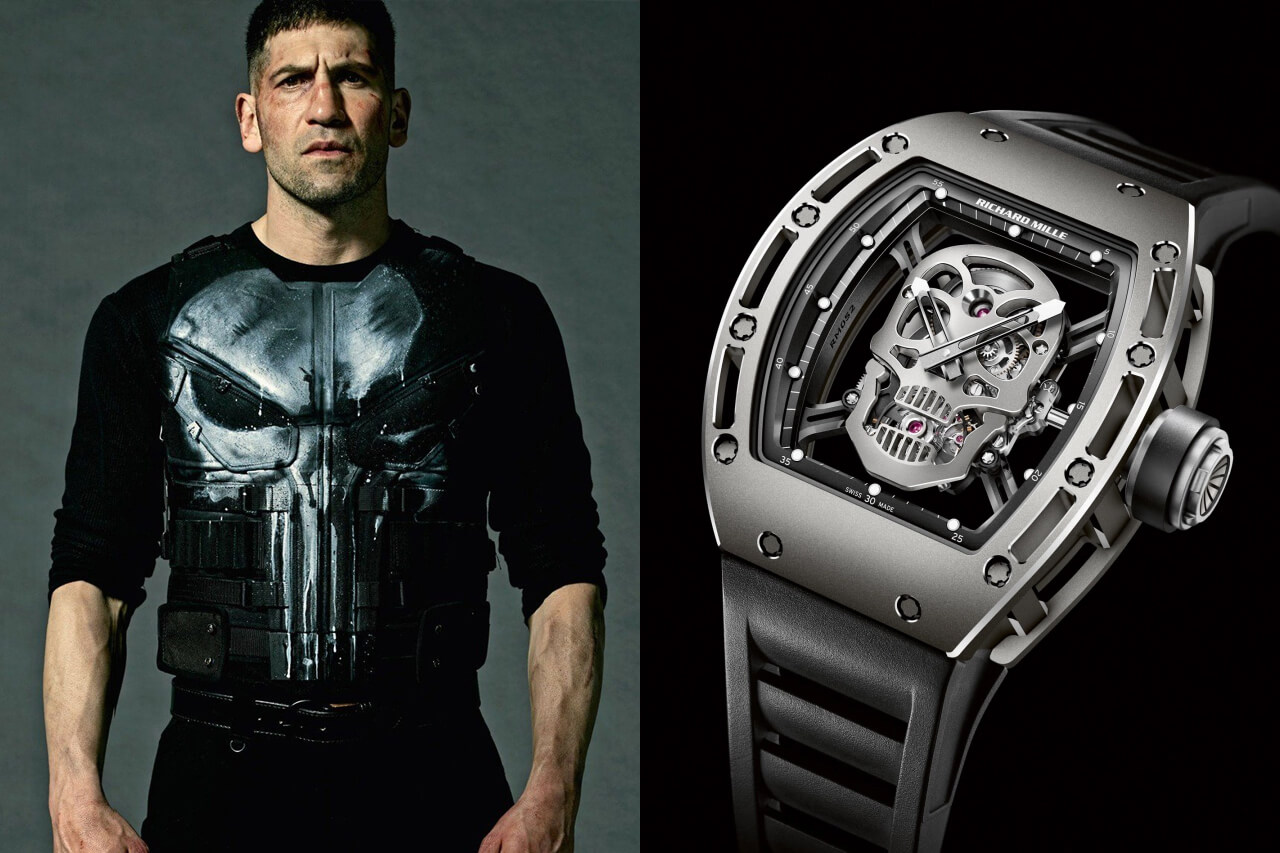 What do you get the man that kills everything? Professional help most likely. But, failing some serious PTSD treatment, any ex-marine with a death wish can appreciate Richard Mille’s morbid momento mori, complete with tourbillon.

If this was anyone else placing a tourbillon near that many explosives it might not be a great idea, but a Richard Mille can survive the apocalypse. It might be a little different to the actual skull on Frank’s shirt but there are few more terrifying sights than a guy with a gun wearing a watch impressive enough for the Expendables – especially when he has a higher body count. 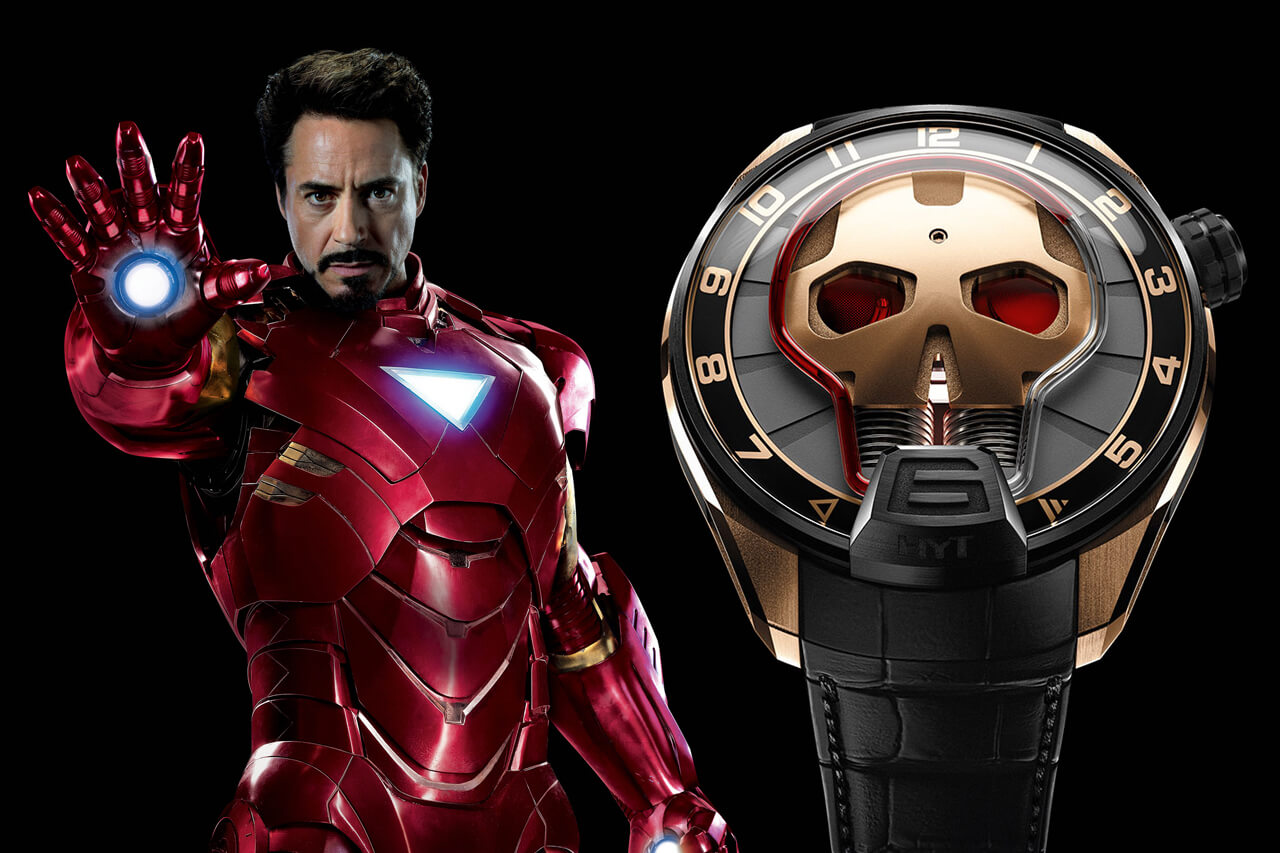 What do you get for the billionaire playboy philanthropist that has everything? How about a watch with his egotistical alter-ego on the front? After all, if there’s one thing Tony Stark likes more than the kind of mechanical ingenuity HYT’s hydraulic timekeeping system shows off, it’s himself. Granted the watch isn’t designed with Iron Man in mind per se – it’s just a red and gold version of the wider Skull Watch model – but the resemblance is uncanny.