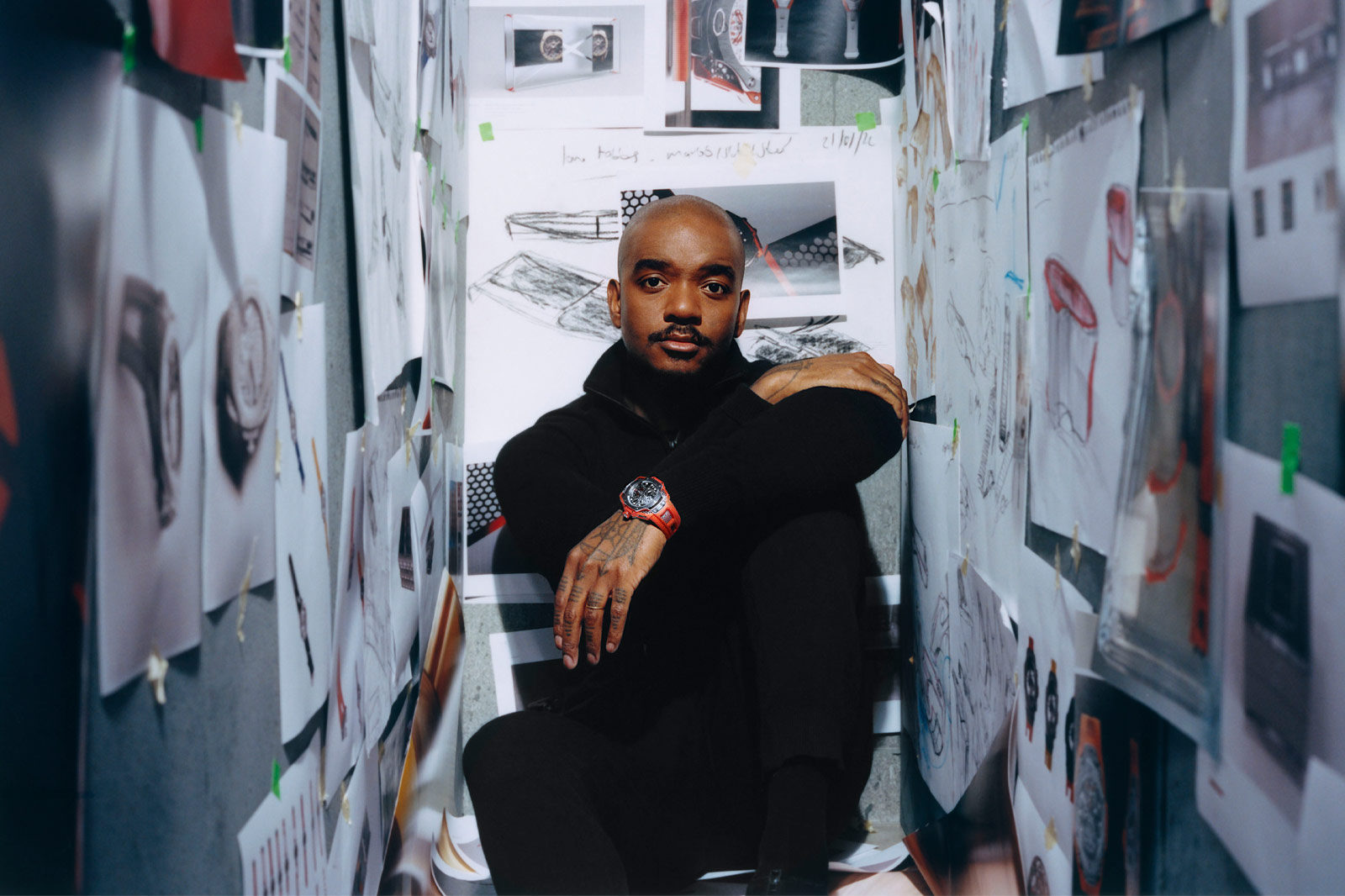 A-Cold-Wall*’s Samuel Ross is a man with more hats than Royal Ascot. He’s a fashion label, an industrial designer, a sculptor, and a creative in whatever direction he happens to be facing at the time. To call him multi-disciplinary is far too narrow a label but listing everything he’s tried his hand at would get exhausting.

Mostly, Ross is known for his work on A-Cold-Wall*, a fashion label that mixes luxury menswear with architectural influences, and the lens of class and community. What that basically means is clothes with cool, industrial vibes, and a penchant for playing with materials. Yet as you might expect from a man with as many facets as Ross, A-Cold-Wall* isn’t his only outlet. In fact these days a good part of his creative output is through his studio, SR_A.

“SR_A’s a bit more loose, a bit more elastic,” says Ross, gesturing to his office space, one filled with sketches, upcycled industrial art and electric bike concepts, among other things. “After building A-Cold-Wall* to the scale it’s at, SR_A is a testament to keeping creativity as pure as possible.” 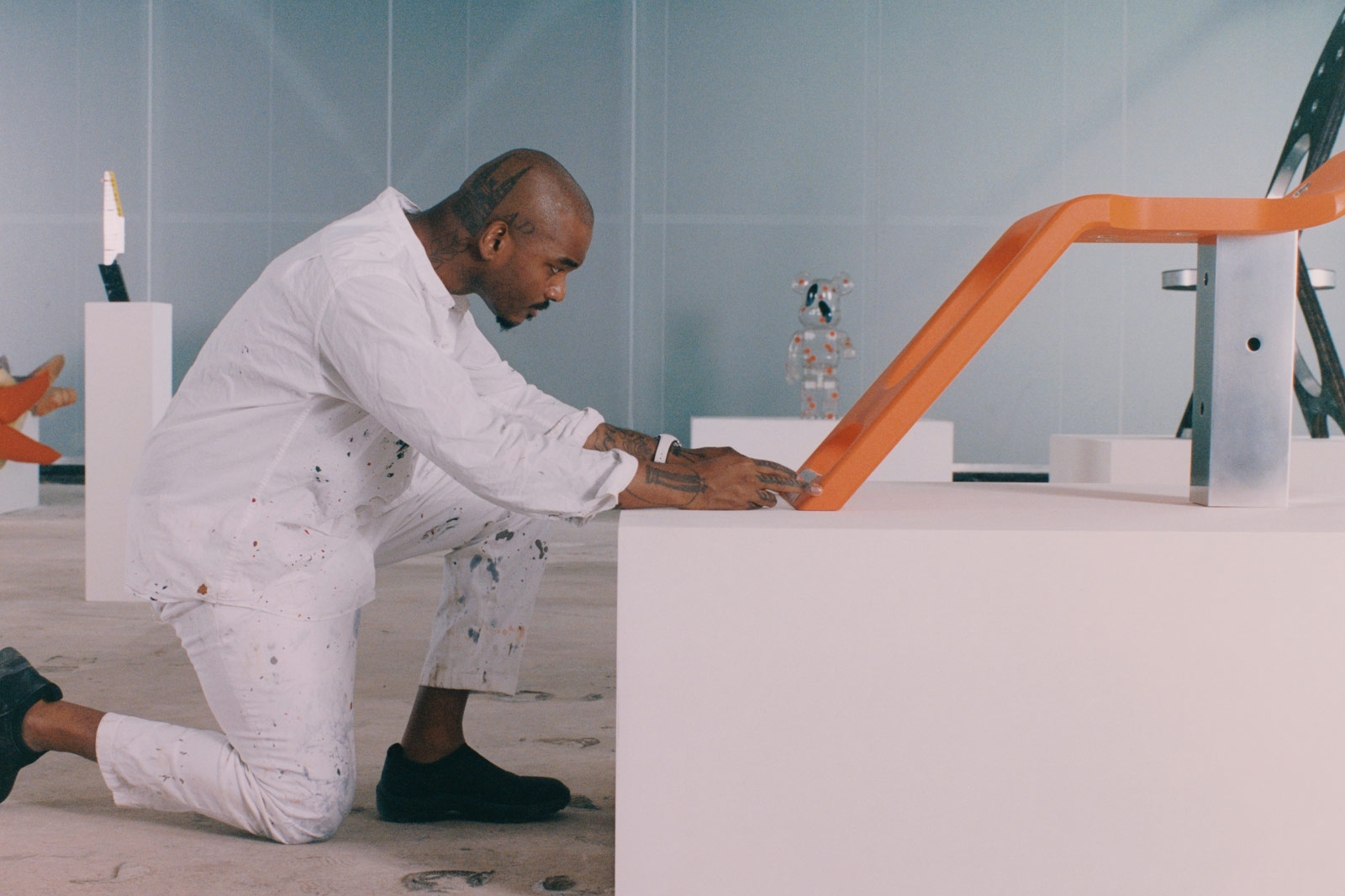 It’s not exactly a direct aim and even for people far more creative than I, that kind of breadth would be daunting. How do you pick a project? How do you fine-tune your approach?

“That’s a really good point! It’s become a bit of a conundrum in how I’m actually categorised. If you look at the last three years of awards, they’re all for ‘changemaker’ because it’s a non- descriptive title. It’s a bit of fun playing with the idea of what a multi- disciplinary practitioner look like these days and it’s something both V (Virgil Abloh) and I wanted to explore, traversing the segue between the design and art space.”

It’s an approach that’s hard to pin down in any meaningful way and in large part that’s the point. But there is always one red thread running through and that’s emotion. 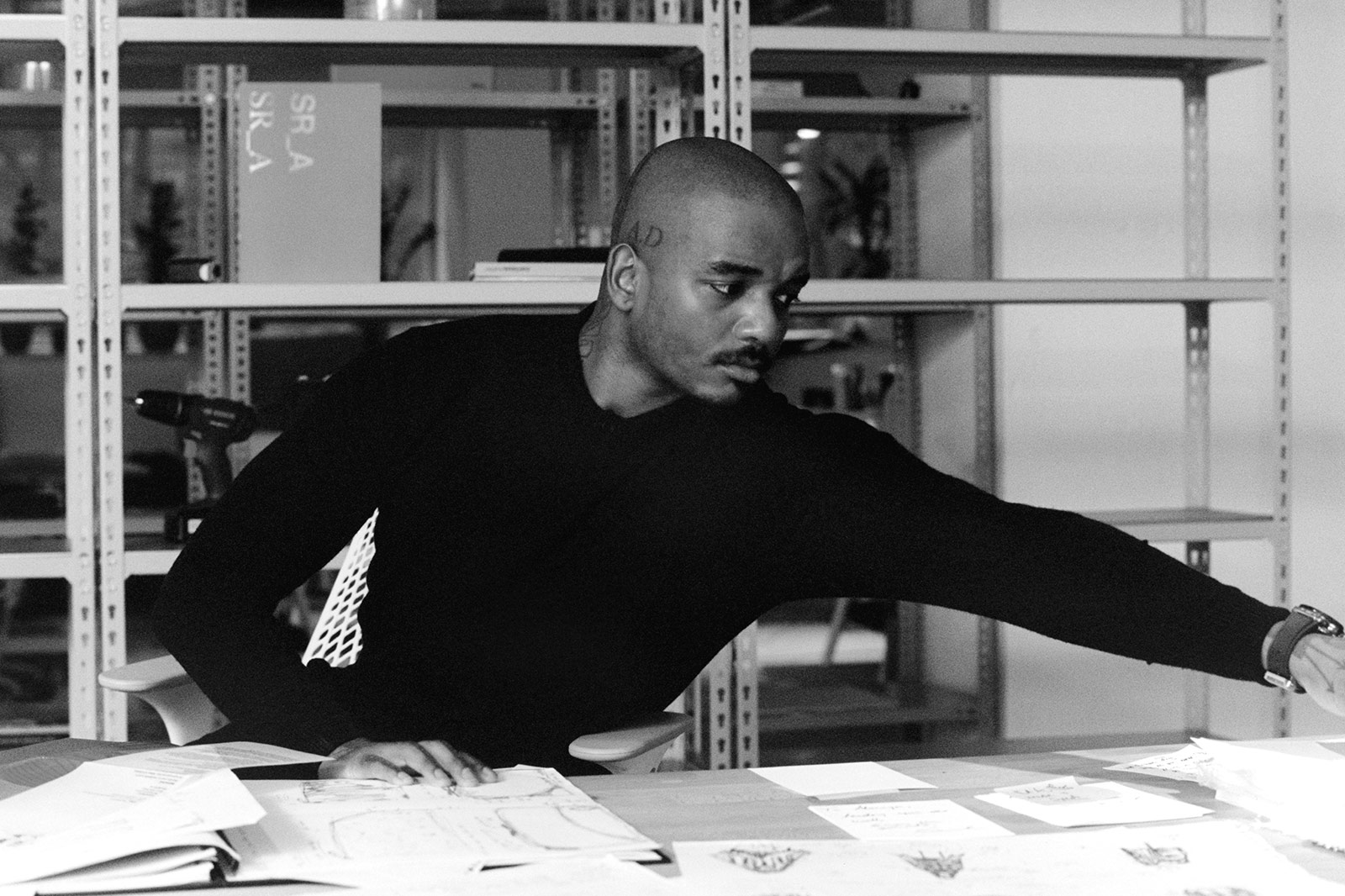 “I’d describe my own approach as experiential. I want make people feel something whether that’s provocation, enthusiasm, even startled, I just want them to have an opinion immediately. That’s the best way I can put it.”

“A-Cold-Wall* was my first true incubator of that. When I think of the early days – we now do about 700 products a year – but there was always an element of world-building around it, a chance to try different things and see what worked or what burned my hand off.”

Trial and error is part of growing a design brand and given A Cold Wall*’s five worldwide mono-stores, countless retailers and a space in Selfridges, there haven’t been all that many errors. Still, it’s reassuring in a schadenfreude kind of way to realise that even Samuel Ross has the occasional failure. So, what was it that burned him? 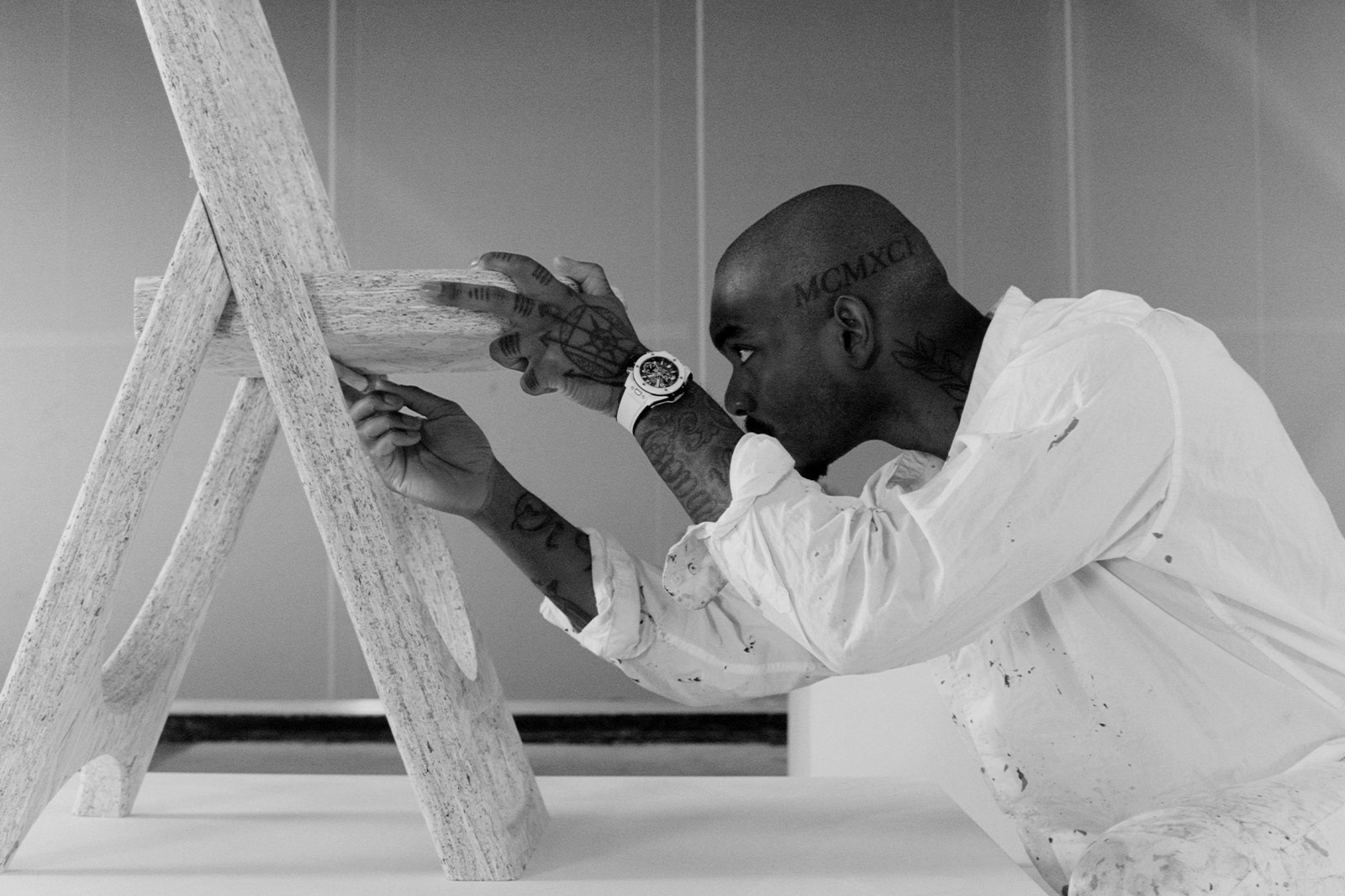 “Furniture. It took me years to understand furniture; seven years. I didn’t understand the level of resources required, the tools and machinery needed to articulate furniture. For a long time I was iterating it as a secondary outpost and there just wasn’t enough reverence for materials and how they worked, so I’d often produce rapid proto and scrap. The first piece that actually made it was in 2018 for Dover Street Market, with plenty of flat, powder- coated iron sheets.”

Now there’s a whole furniture wing to Samuel’s creative business, so evidently he wasn’t burned too badly by the experience. Sound though really has taken a back seat. Ross used to score all of his runway shows, now he uses actual musicians – “they’re far more proficient than me!”

“Trying new things has birthed a respect for the history of a craft, what makes a movement beyond objective aesthetic value. Why post-modernism, why brutalism, why deconstructivism, whatever it may be? It made me realise that you have to understand the legacy behind what you’re trying to do in order to look forwards.” 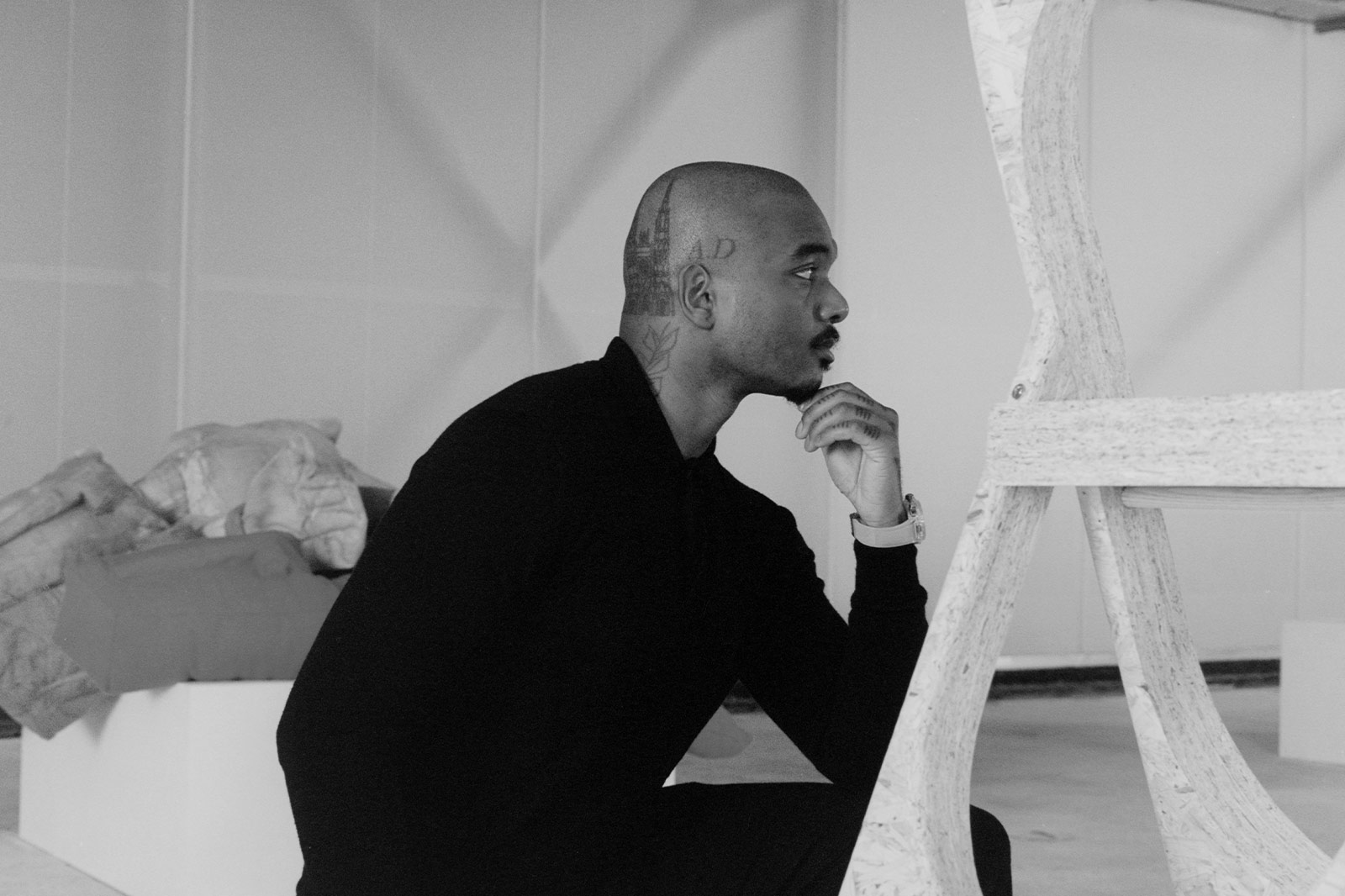 So, where does A-Cold-Wall* sit on that spectrum? “Between brutalism and post- modernism for the most part,” replies Ross. “We look at mid-century German and social design like Studio Super, looking at design from an optimistic standpoint. Part of me knows that a large part of your design ethos comes from what you read early on, whether you happened to pick up neo-classical or post-modern, and for me it was that area.”

Perhaps most importantly though – and something which Ross is very keen to underpin – is that his kind of broad approach to design and creativity is only possible with a grounding in theory, in education of the craft. It’s the idea that, while there are plenty of potentially great artists and designers out there, you need the knowledge to be able to back up your ideas.

For Ross that was a degree in graphic design and illustration at De Mortfort University, Leicester, where he graduated with a first. He then dived straight into product design after being scouted at his degree show. The thing is though, that wasn’t exactly what he wanted to do. 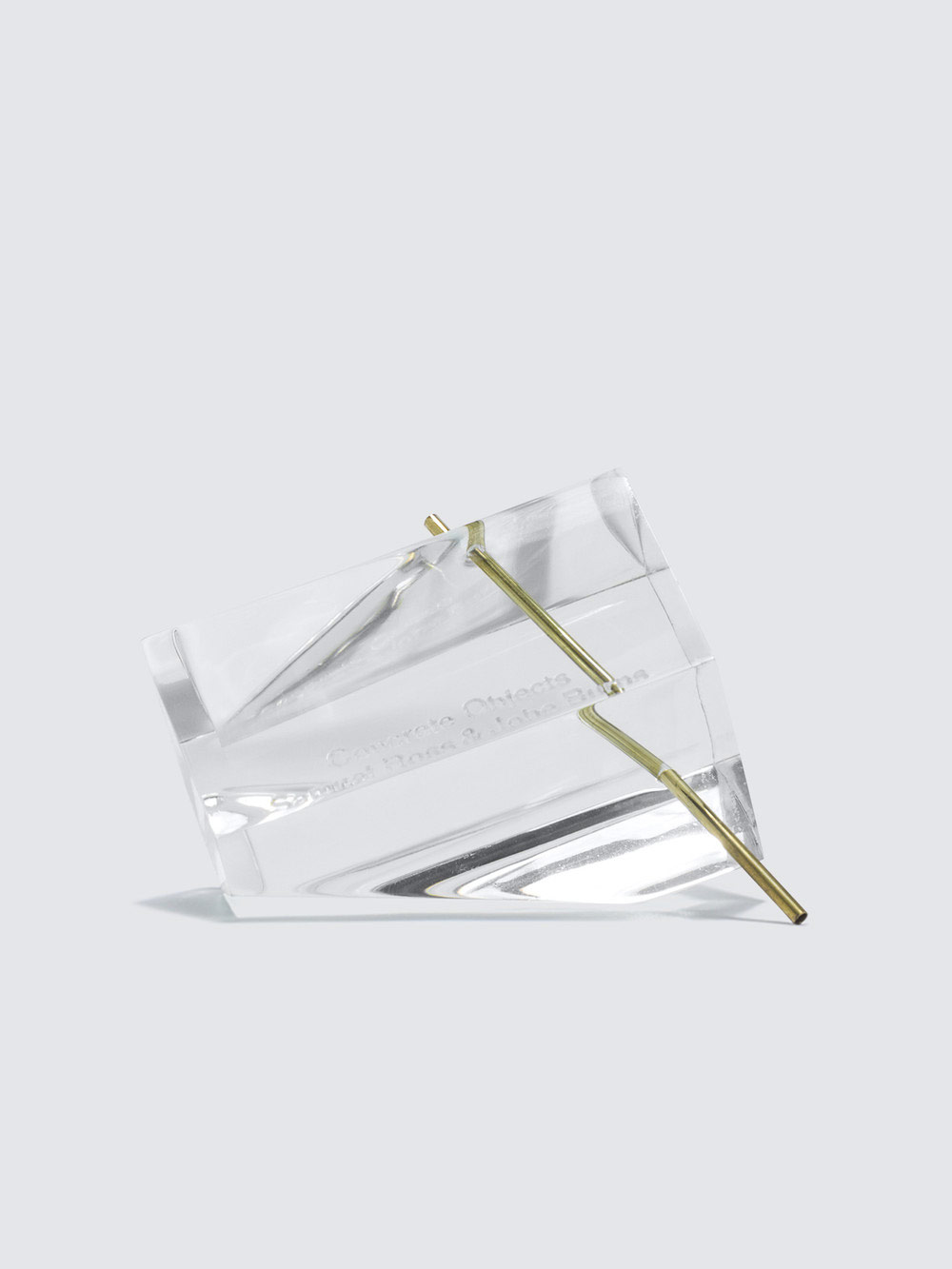 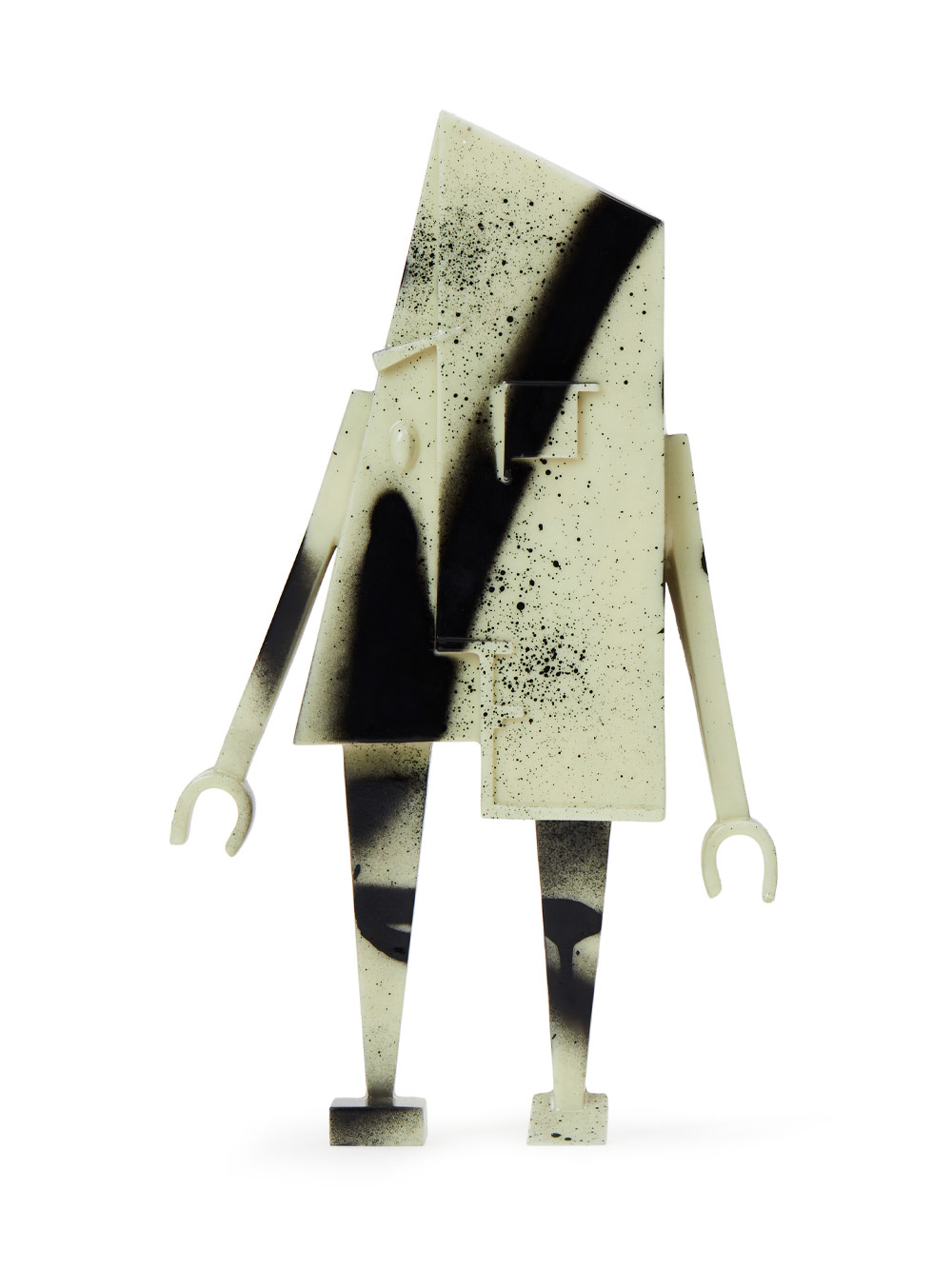 “I was actually considering a fine art degree,” he explains, “but I didn’t think someone of my background would be able to do it, to make it into a career. So, I did design instead.”

Evidently it wasn’t a bad decision, but it’s one that in recent years Ross has taken pains to rectify. Lately, creative polymath that he is, he’s been working as much in fine art as traditional design, with sculptures and sketches aplenty, enough that he’ll soon be heading to the Basel Art Fair in Miami before opening his first gallery solo show here in the UK, doing his part to change the perceptions he himself fell victim to.

“The first time I saw a Michael Moore piece I thought who? What? Why? When? How? I feel in love with this idea of being able to generate a response across multiple generations. For me, sculpture has been a way of broadening what I have to give to the future via design versus extending what’s been done in the past. You don’t want to decimate the past, but you need both.” 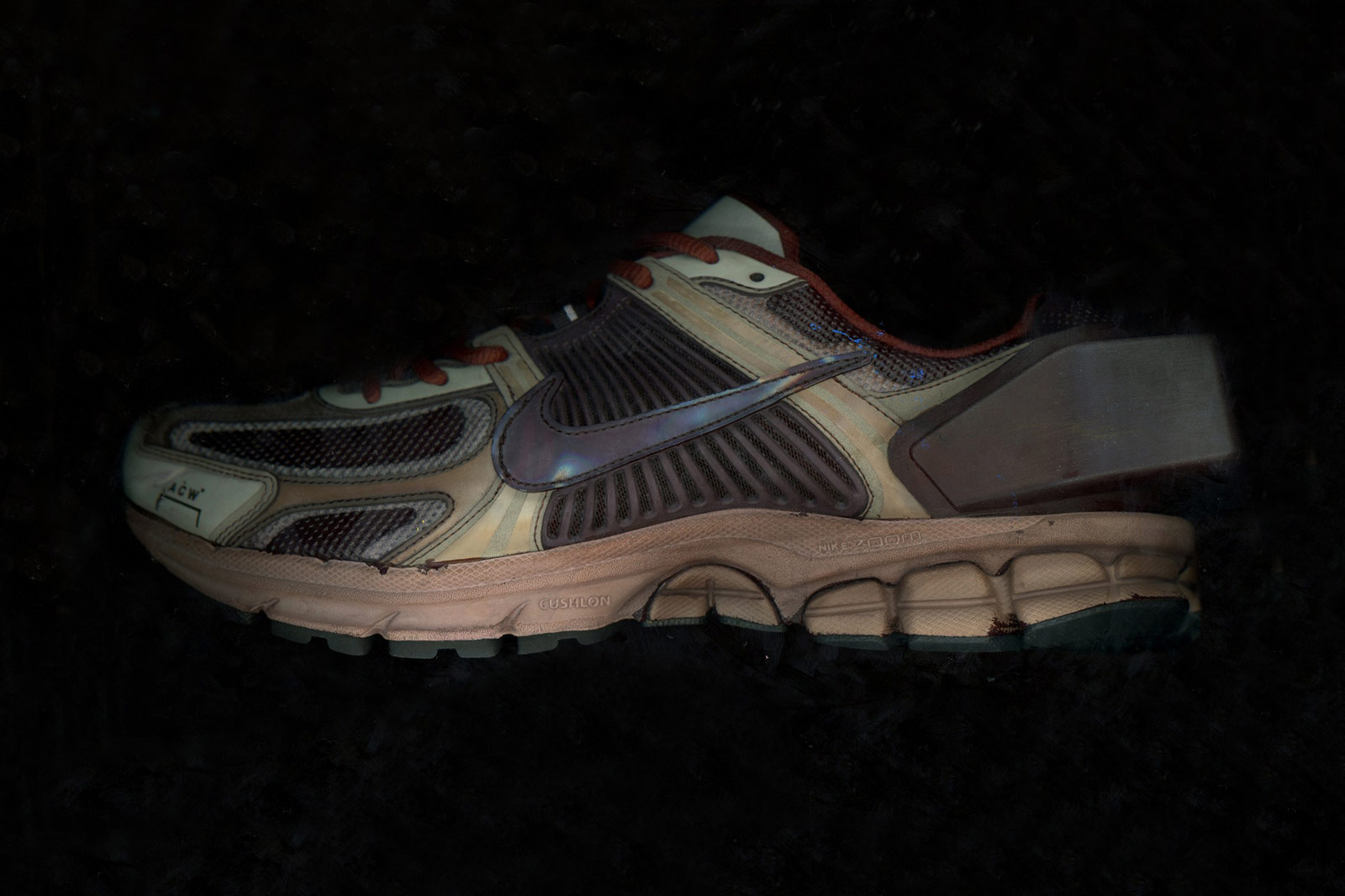 Between A-Cold-Wall* becoming a catwalk and collaborative giant, and his upcoming domination of the art world, Ross has had a meteoric rise. And while he worked hard for it all, it’s impossible to discuss his success without also mentioning the late, great Virgil Abloh.

“That opportunity was sensibility, serendipity and preparation coalescing. When he came across my portfolio on socials, he could see my work across disciplines, he could see the education. I still believe that formal underpinning was the most important factor in him investing in me – his own background was architecture. Creative autonomy is good if you’re 18, or 23 and you’re naturally part of the zeitgeist, but that training is what leads to longevity. Virgil gave me an amazing opportunity.”

Over the past three years, it’s the kind of opportunity Ross has been paying back by building a funding programme specifically for creatives that deserve to reach a wider audience. This year’s award is now closed, but it’s something that so far has been instrumental in bringing some fresh faces into the design world. 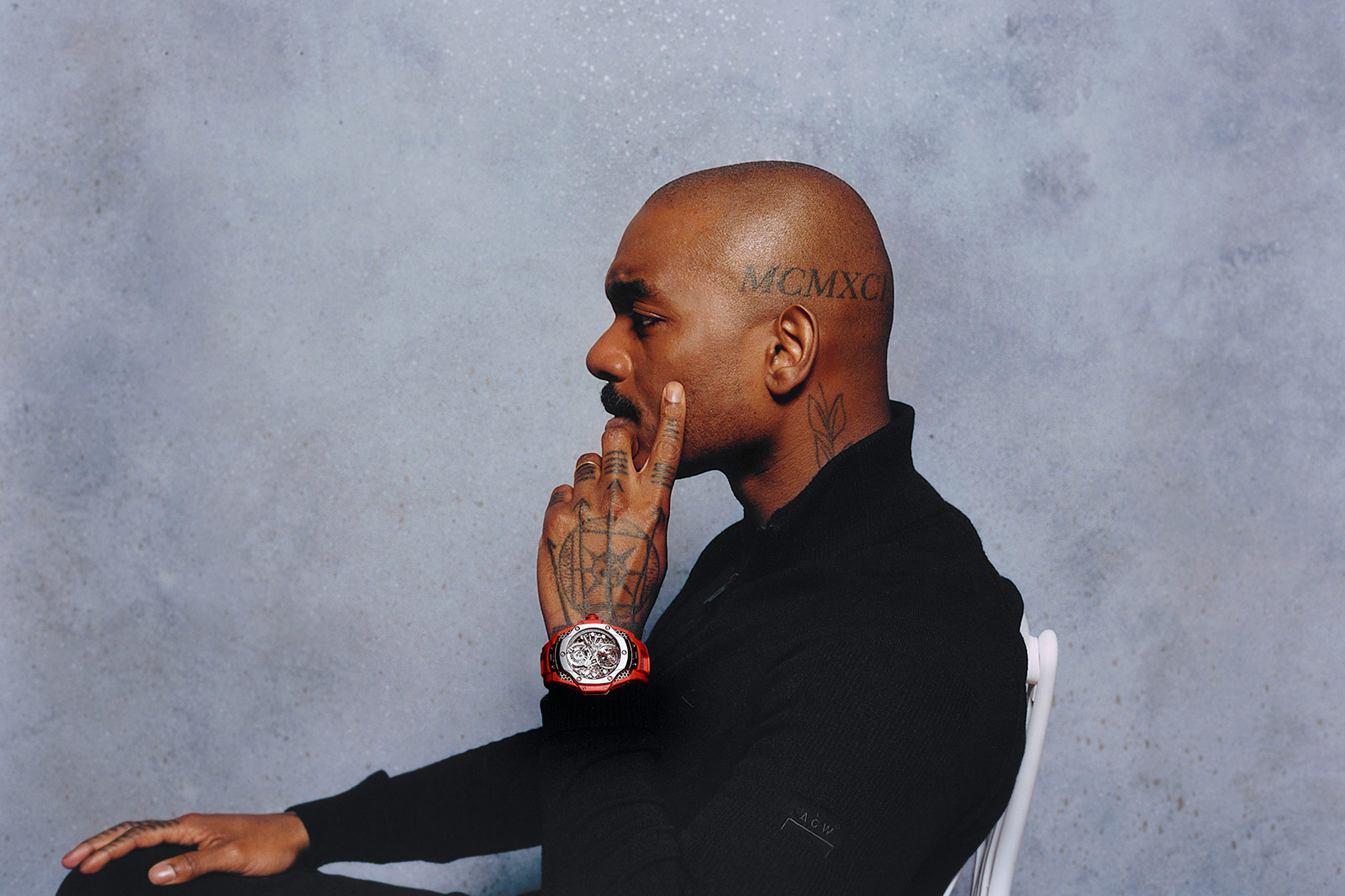 “The main focus is looking at the lack of opportunity, and it’s not just about giving capital. We have an amazing advisory board – Tim Marlow of the design museum, Dr. Casely-Hayford of the V&A, Caroline Rush of the British Fashion Council, others I can’t remember right now. We’ve seen talent like Mac Collins come through who’s done some amazing work, Nigel Matambo in now consulting for Facebook, Dominique Petit-Frere went on to win a Dezeen architecture prize, it’s been a privilege.”

It’s the idea of finding these exceptional creative talents and onboarding them into the education both Samuel Ross and Virgil Abloh so believe in, as it gives these would-be students the opportunity to turn their zeitgeist-driven eye into something much more enduring. 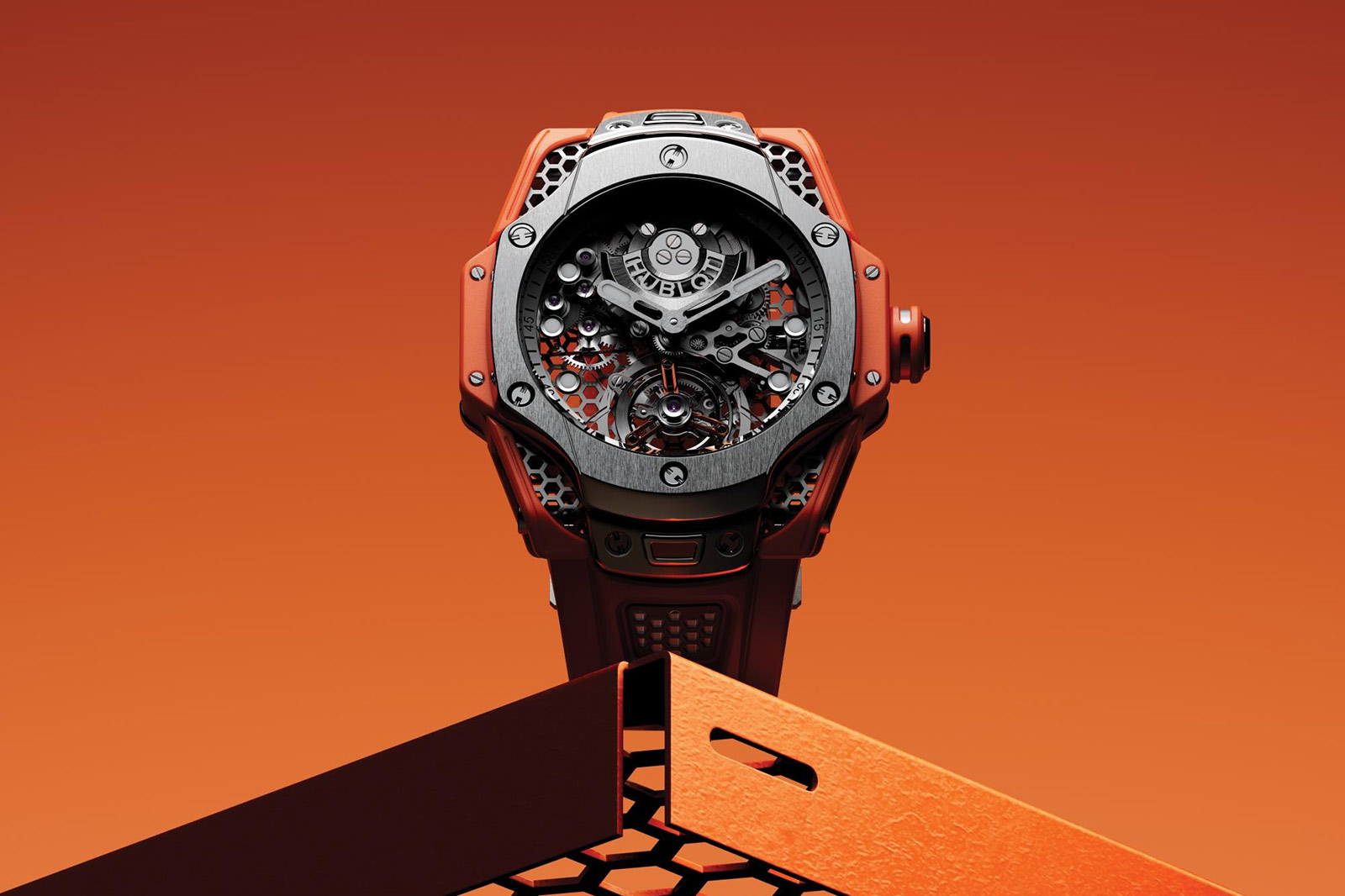 Of course, while that’s all great, we are, first and foremost, a watch magazine, and it would be remiss of us not to discuss the elephant-sized watch in the room: the Hublot Big Bang Tourbillon Samuel Ross. It’s… a lot, even by Hublot standards.

A 45mm mix of titanium, both polished and satin- finished, with overwhelming industrial flourishes and plenty of orange, it’s about as shy and retiring as having a cathedral tattooed on the back of your head. Which is, in a roundabout way, how the Hublot relationship happened. Ross’s own tattoo – a St. Paul’s-esque splash of architecture – was inked by none other than fellow Hublot ambassador Maxime Buchi of Sang Bleu. 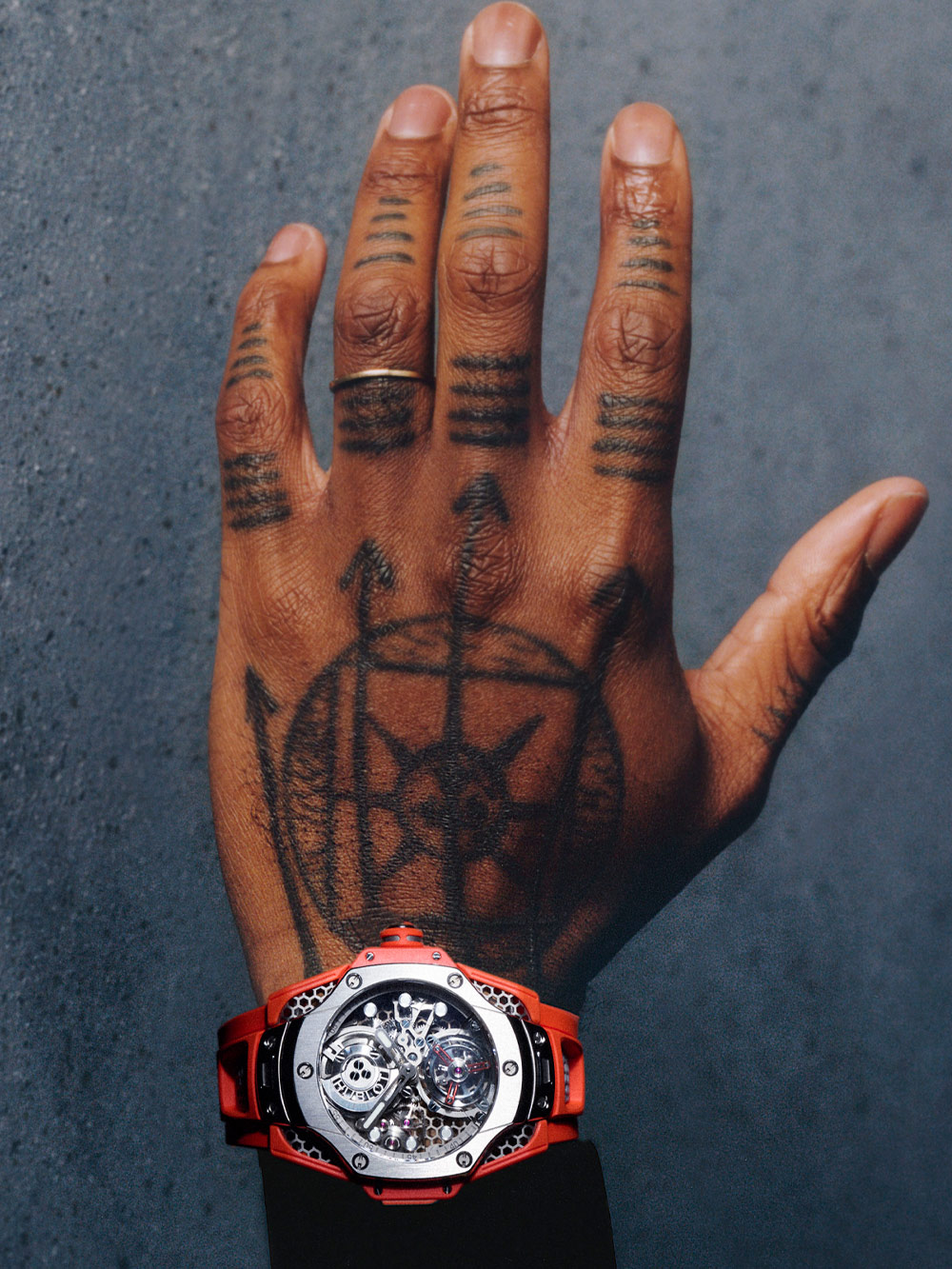 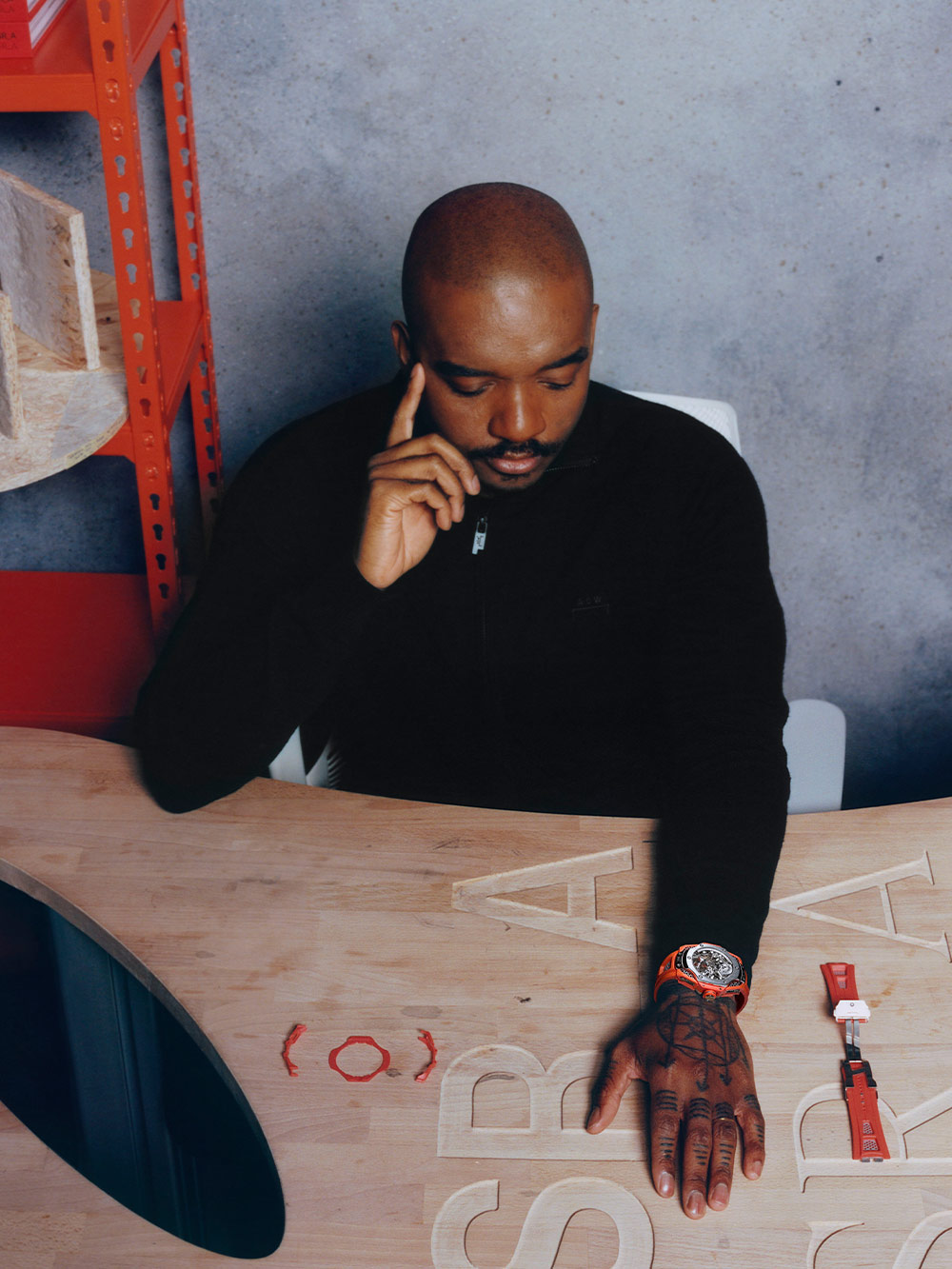 “I had this idea of alchemy in terms of the scale and weight – I’m used to wearing a 41mm or 39mm watch – of having this perforated polymer and lightweight titanium that is still a big, present watch. We curved the case to follow the form of your wrist so it sits more on your wrist than a traditional Big Bang. It’s a direction that we’ve committed to. There will be a wider offering – I’m excited to work with carbon fibre, recycled materials, I want to see a lot of precious metals on the watch, and I’m sure beyond that there will be additional models I’ll have an effect on. But for now I’m trying to get this thing into a 41mm case!”

There are certainly synergies between Ross and Hublot. For one, it harks back to the designer’s longing to cause a reaction. You can’t look at this limited edition and not have a strong opinion on it. For another, working with the confines (or opportunity) of fine watchmaking is like trying not to get burned by furniture again. It seems like Ross has been given the opportunity to play with fire once again and he’s excited to see how hot it can get.