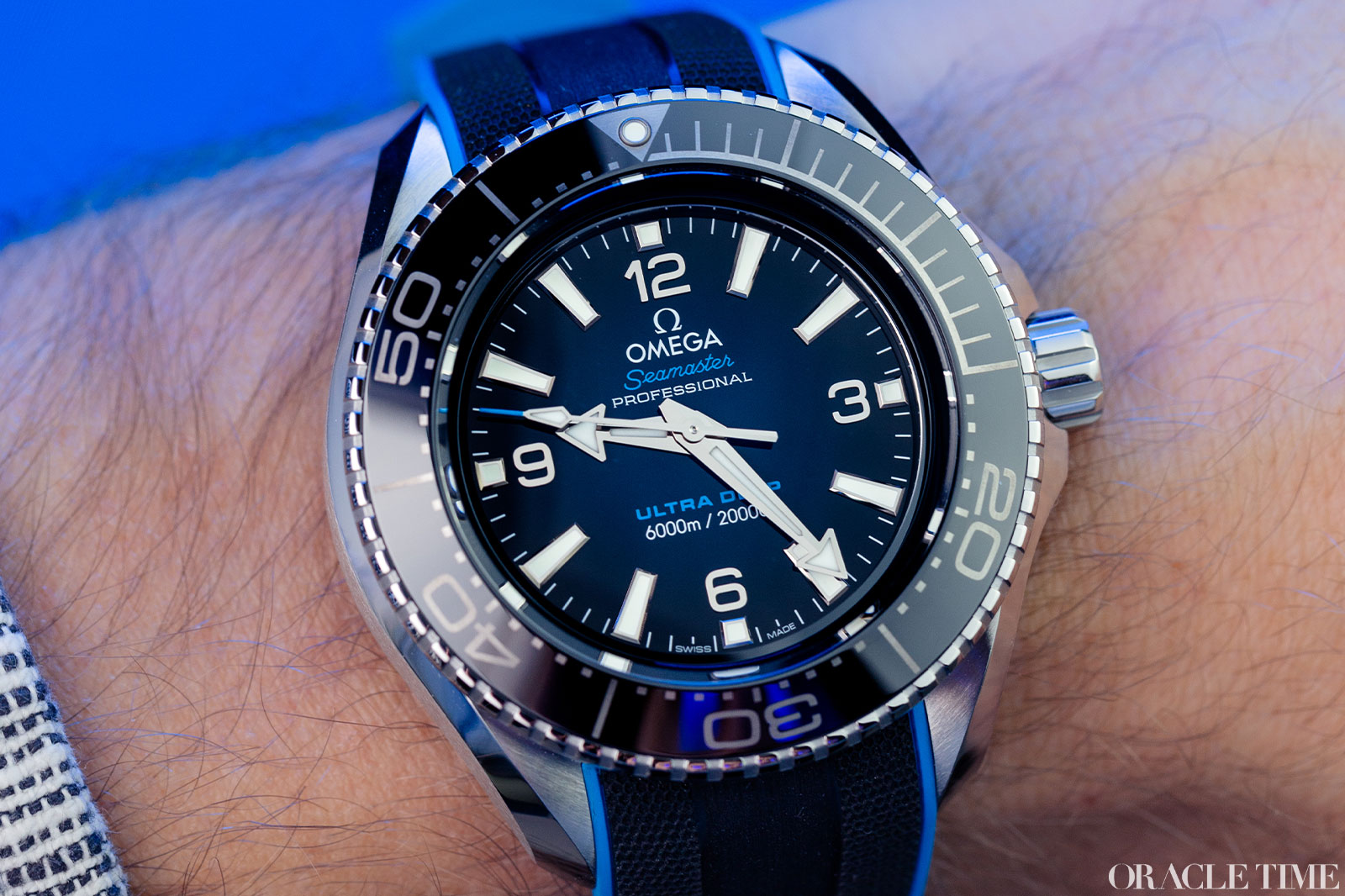 Back in 2019, Omega did something that Rolex probably weren’t too happy about: they beat their deep-sea record. Sure, James Cameron did indeed make it to the bottom of the Mariana Trench, and the Challenger Deep at that, but according to maps of the ocean floor, not quite to the exact deepest point.

It’s a small difference of a few metres – and honestly, being first counts as much as being deepest – but it was enough for uber-wealthy explorer (and ponytail aficionado extraordinaire) Victor Vescovo to try his hand. And then some. Rather than just beating the record, he did so at the end of a five-dive expedition he called the Five Deeps. 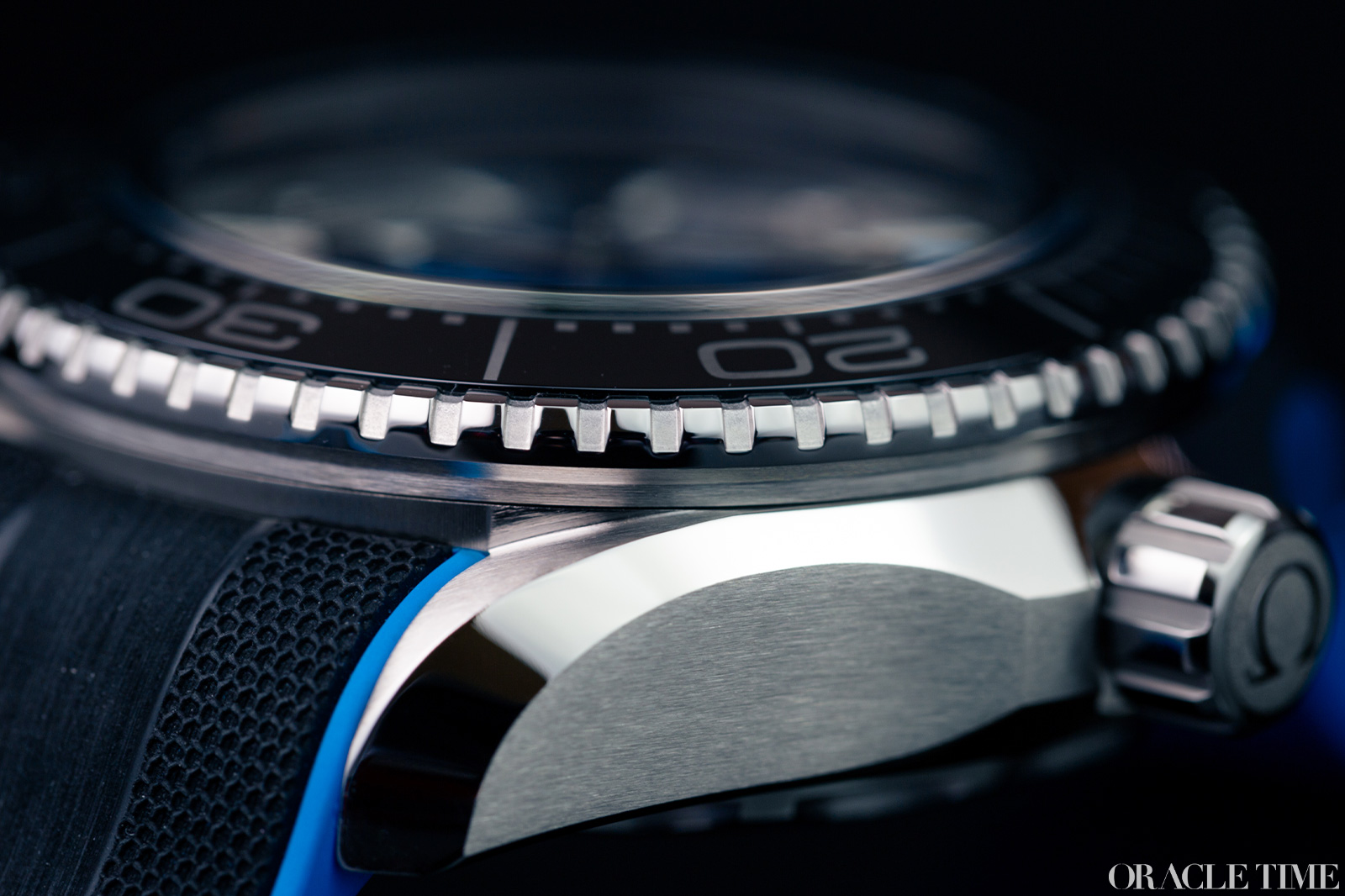 Billionaire indulgence it may have been, but Omega evidently sensed an opportunity and when submersible Limiting Factor headed down for each of the five dives, it carried on its outboard mechanical arm a very special Planet Ocean. Only three were made of the Ultra Deep, which managed repeated dives, the deepest of which was well over 10,000m down. Until now. Kind of.

The Planet Ocean Ultra Deep isn’t quite the same as that original Mariana-conquering concept trio. For one, its depth rating is a comparatively paltry 6,000m – which, let’s be fair, is staggering by production watch standards. That’s 20,000 feet. That’s insane and anyone that actively wants to test this watch to its limit needs an intervention.

However, what it loses in water resistance it gains in wearability. By losing size. The original watch was 55mm across, putting vintage military Panerais to shame. This consumer-friendly incarnation is 45.5mm, which is much more manageable, though I have to say the lug-to-lug of 56mm feels huge. Not unwearably so, but chunky enough to make the titanium variation pretty appealing. 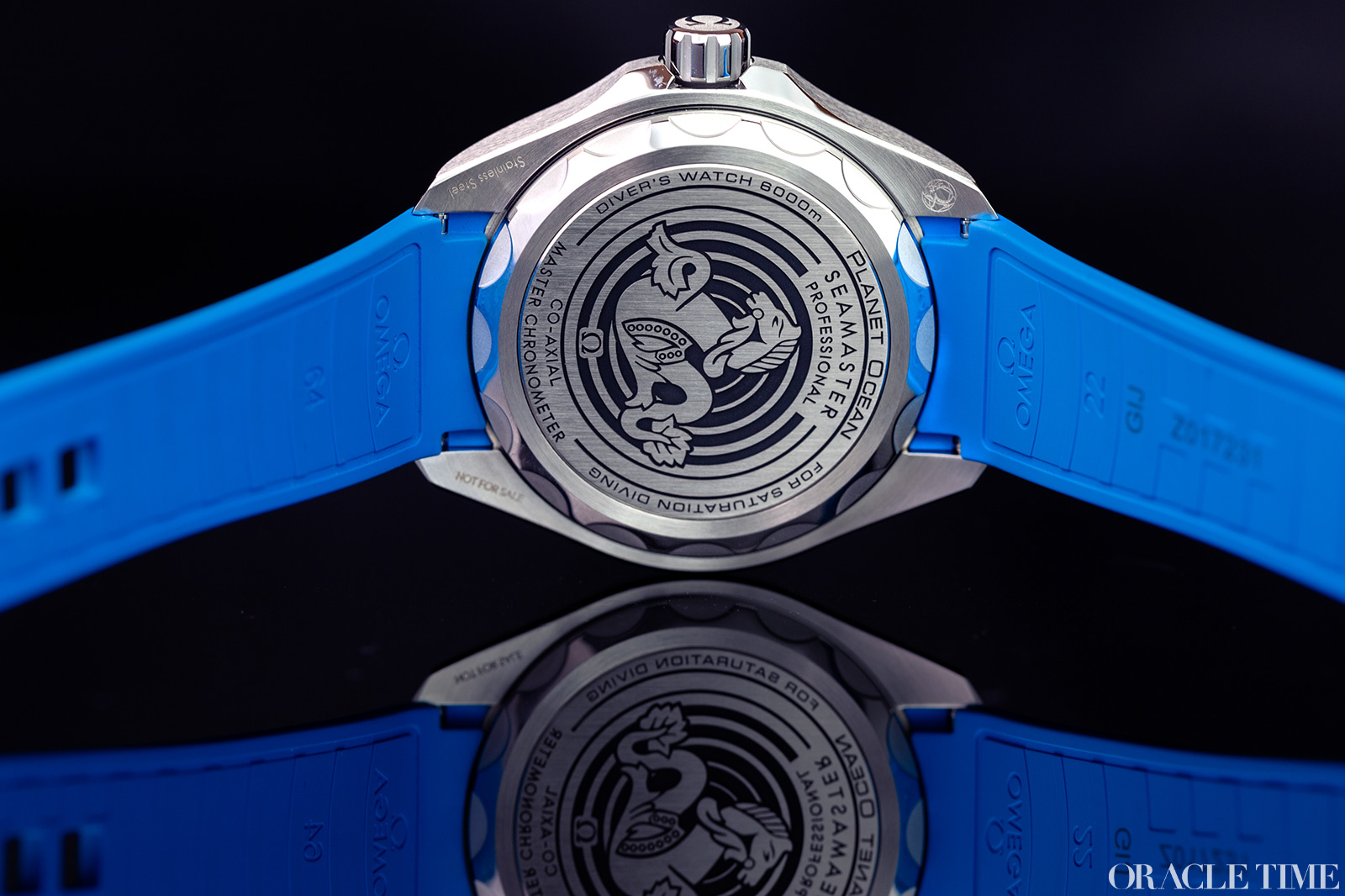 Which brings us to what else is new about the watch: O-MEGASTEEL. I’ve had a few weeks now to come to terms with how silly the new alloy sounds, but yes, that is actually what it’s called. I doubt Oystersteel sounded quite as on the nose when that was released.

It looks and feels much like stainless steel. There’s a slight difference in colour when side-by-side with another steel watch (the Omega is slightly lighter) but otherwise it’s all in the specs. It’s 40 to 50% stronger than your average steel, is non-magnetic and has serious corrosion resistance. It’s steel on steroids. Cringe-worthy name aside, it’s a serious step forwards, so expect to see it plenty more in Omega’s collection.

There are seven new references in the Seamaster Planet Ocean Ultra Deep Collection (four if you don’t count a change of strap as a new watch, which I don’t) and, while the titanium with its grey dial is the closest to the original Limiting Factor on-board clock, the blue fume is the most handsome of the lot. It really leans into the whole deep blue sea vibe (minus super-intelligent sharks), with a relatively dark colouring across the board. Paired with a black ceramic diving bezel, it’s a serious-looking diving watch for serious-looking divers. 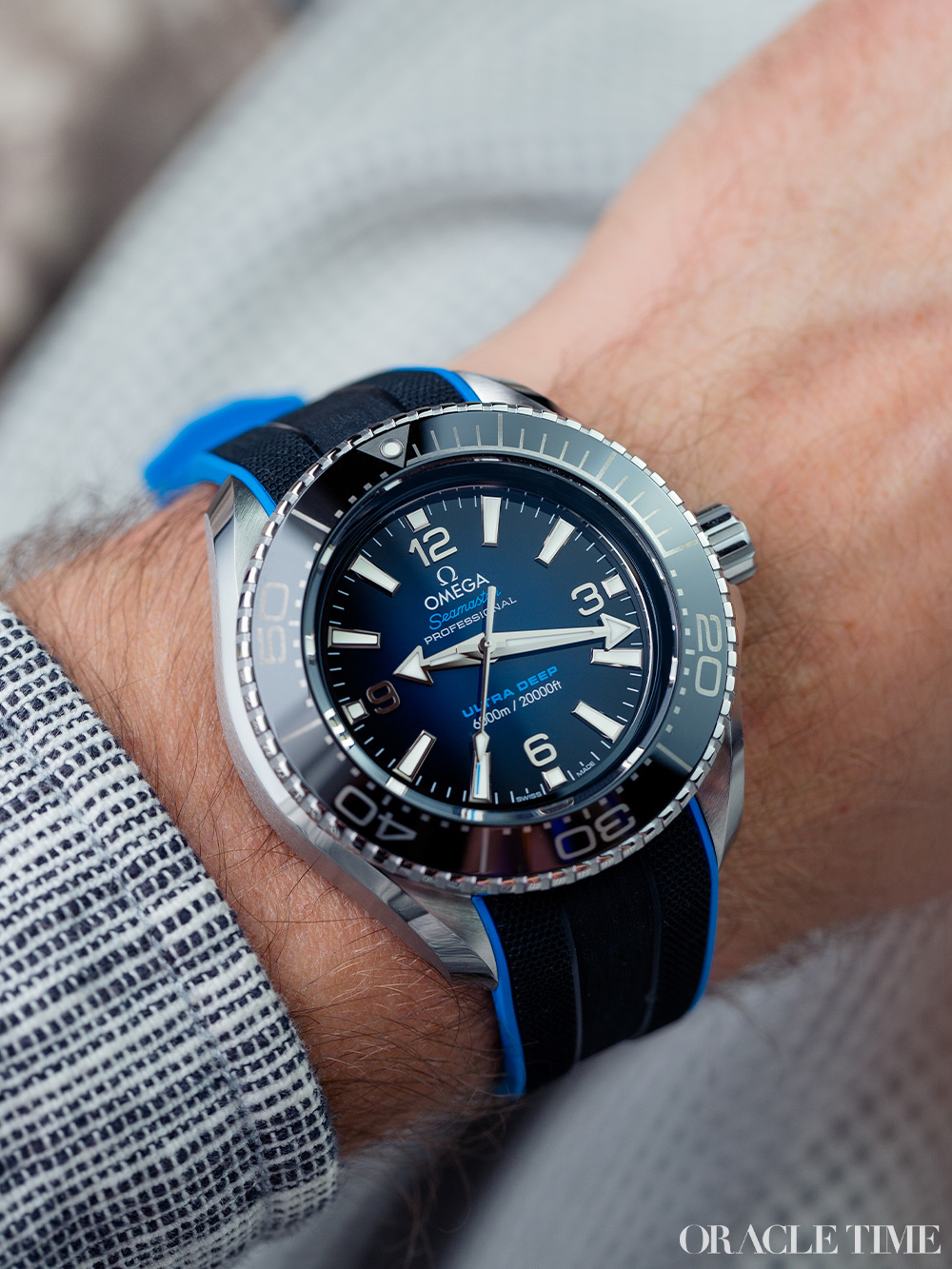 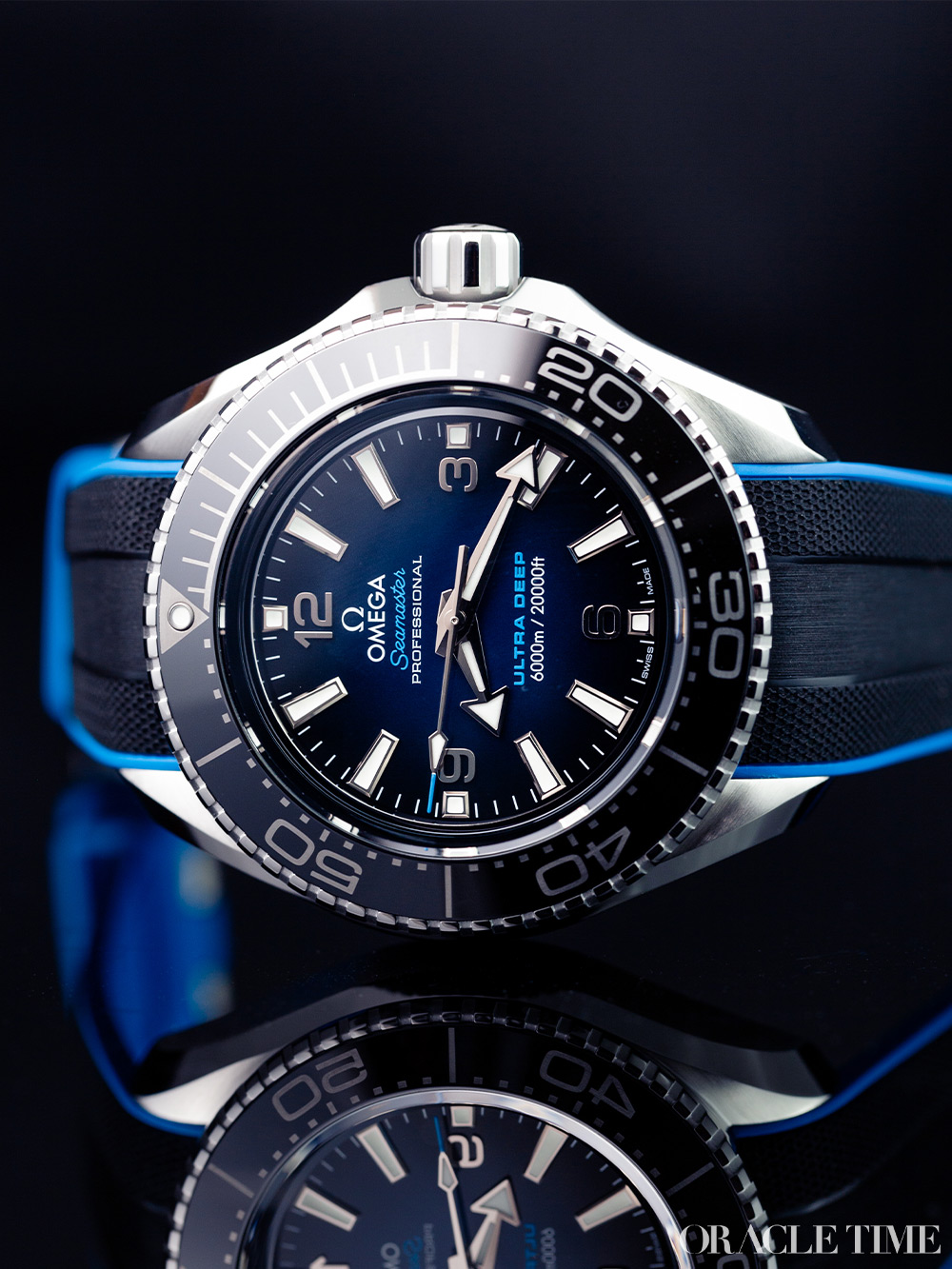 There are two options for strap, this version on a cool, textured, contrast edge rubber strap or a metal bracelet. Even if there wasn’t a £290 price difference, I’d opt for the cheaper rubber version. The strap works to bring out the dial of the blue which otherwise feels a bit lost.

With Omega pushing their Master Chronometer status ever further, it’s no surprise to see that the calibre 8912 here is also METAS-certified and almost as resistant to magnetism as the case metal. After all, if there’s one place you don’t want to be let down, it’s the crushing depths of the existentially terrifying ocean. For landlubbers that also means an appreciable 60-hour power reserve. Which is nice.

Finally, there’s the price. Your standard Seamaster Planet Ocean models are already high-end, generally falling between £5,000 and £6,000 with the occasional outlier. The Ultra Deep is £10,060. That’s a significant increase.

Now, it’s easy to argue that it’s worth the price. It does, after all, have 10 times the depth rating. My problem with that argument is: who’s actually going to test that? 6,000m is just too deep, meaning there can’t be much of a market for it outside of Victor Vescovo and friends. 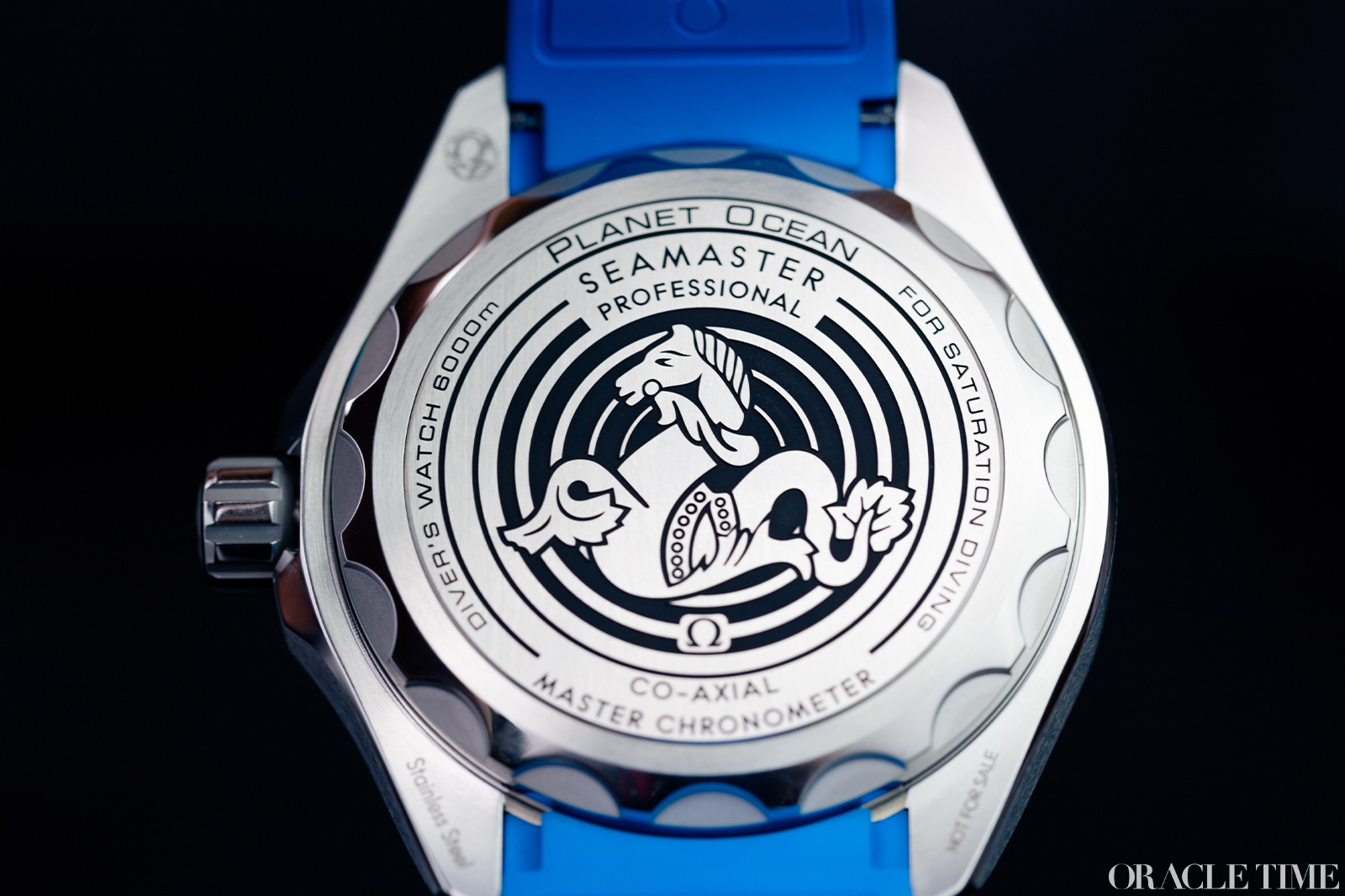 By all means let me know if I’m wrong; I don’t dive myself other than the occasional bit of snorkelling in better times, so perhaps those depths aren’t as rare as I believe them to be. But it does seem like the 6,000m rating is not much more than an Omega flex – albeit a seriously impressive one.

And indeed, the Ultra Deep is an incredibly impressive timepiece. It looks and feels like the serious piece of kit it is; well-balanced despite its relatively imposing dimensions and, even if it does sound silly, the introduction of what could be a great new material for Omega. Though I would very much like to try the titanium version after this bad boy…