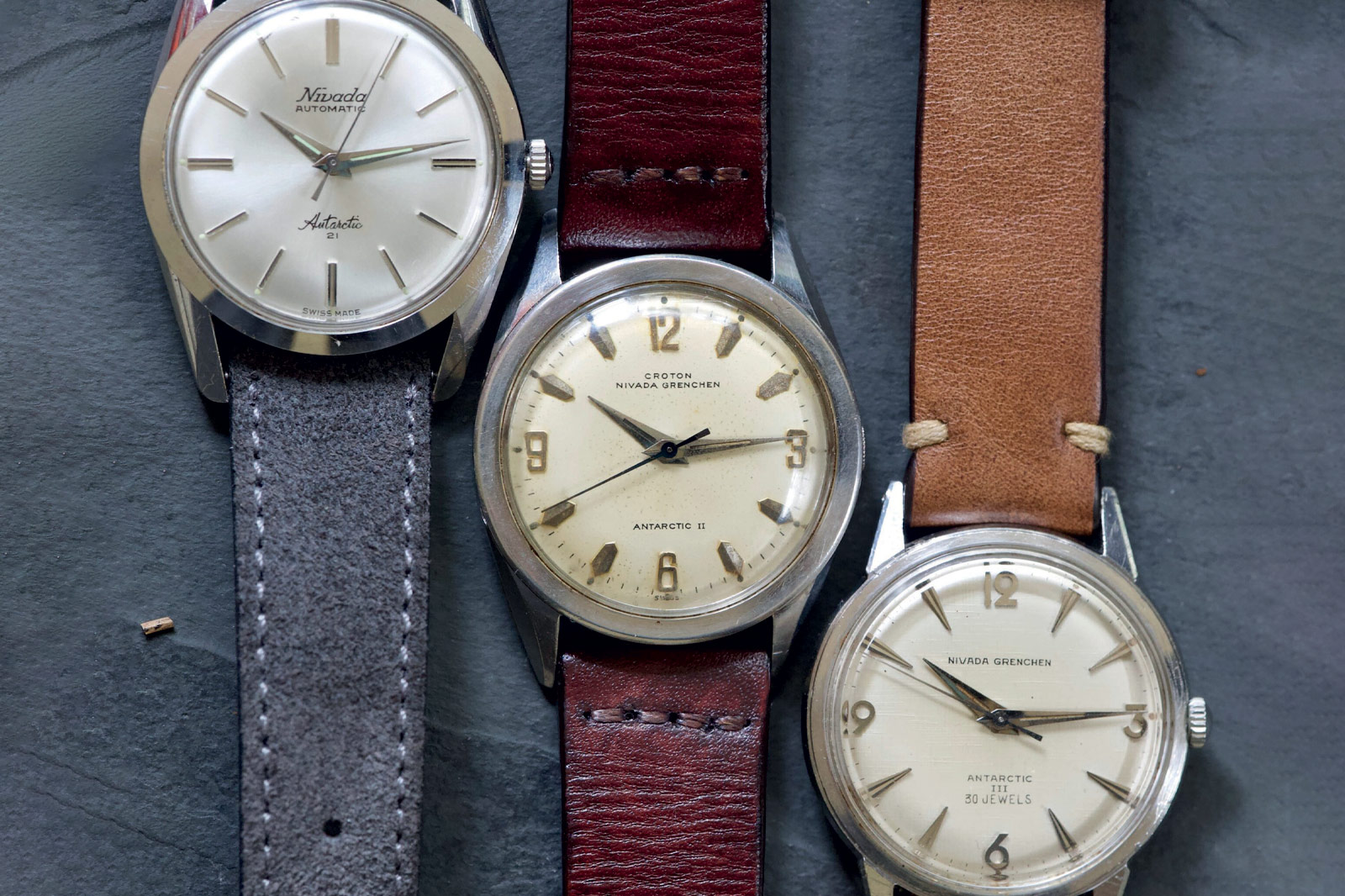 First off, I’m just going to call the brand Nivada. They were branded differently in different places, and as the shortest name, that’s what I’ll use. However, it’s not just the name that’s up for some debate as the exact founding of Nivada is hard to pin down, though signs point to 1926. They cut their teeth on dress watches up until the 1950s when they segued into hardwearing, waterproof timepieces such as the Nivada Antarctic.

At the same time the Cold War was getting into full swing, the International Council of Scientific Unions was formed. To promote love peace and not nuking each other, they proposed the International Geophysical Year, a sharing of resources and cooperation. At the centre of that cooperation was the Antarctic. 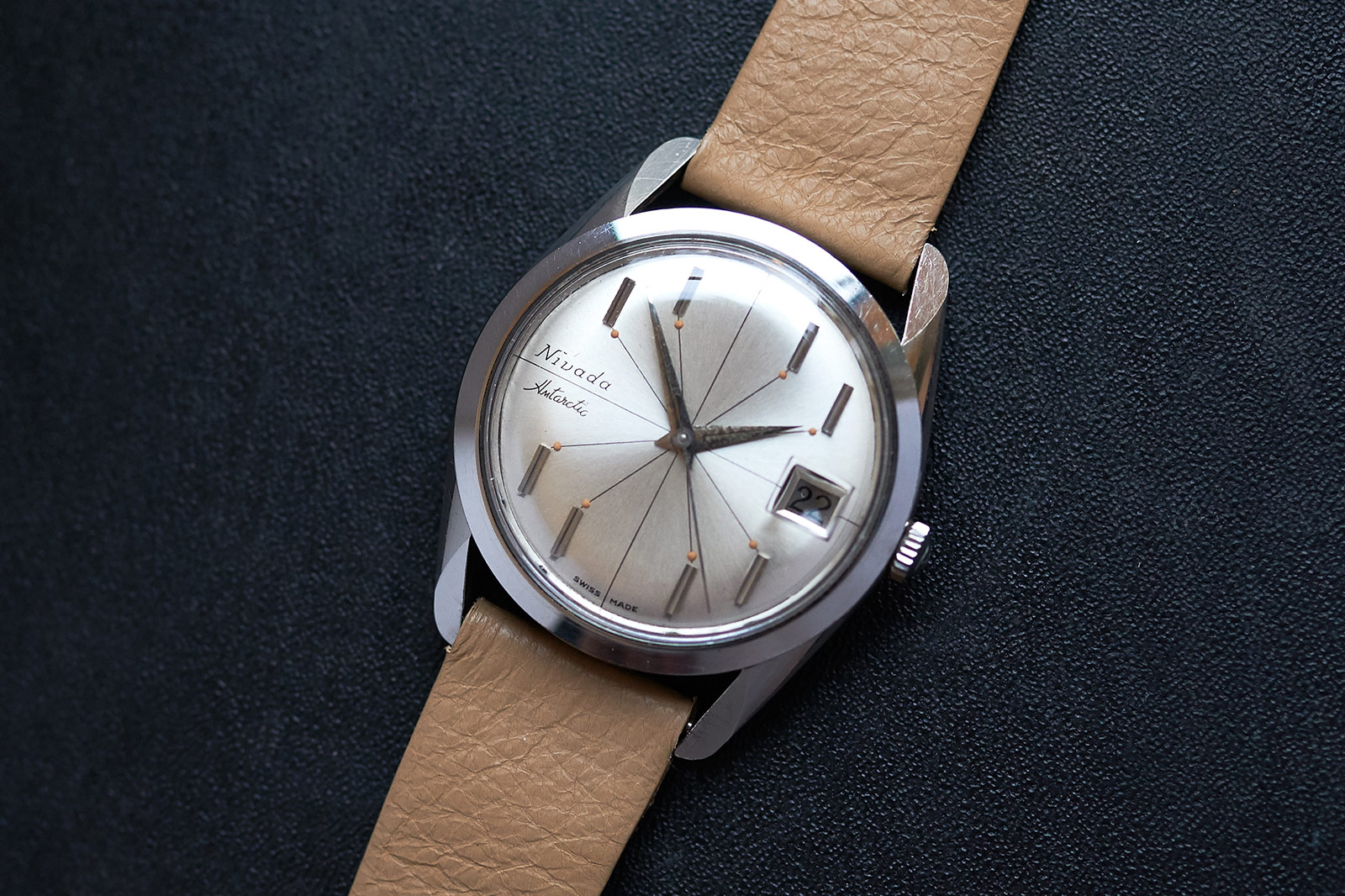 Along with a number of other famous watchmakers, Nivada built some watches specifically designed to conquer the cold, in their case for the US Antarctic expedition, Operation Deep Freeze. It needed to be waterproof, anti-magnetic, and automatic – and so the Nivada Antarctic was born.

Based on the brand’s previous Aquamatic line, the Antarctic combined a 35mm case and cool, bevelled lugs with elaborate, multi-faceted markers and unusually ornate dauphine hands. Finished with a thick bezel for a bit of wrist presence, it was an adventure watch with dressy sensibilities. There was even a version with a 3D textured dial that evoked a snowy tundra – a philosophical precursor to what Grand Seiko’s known for today. 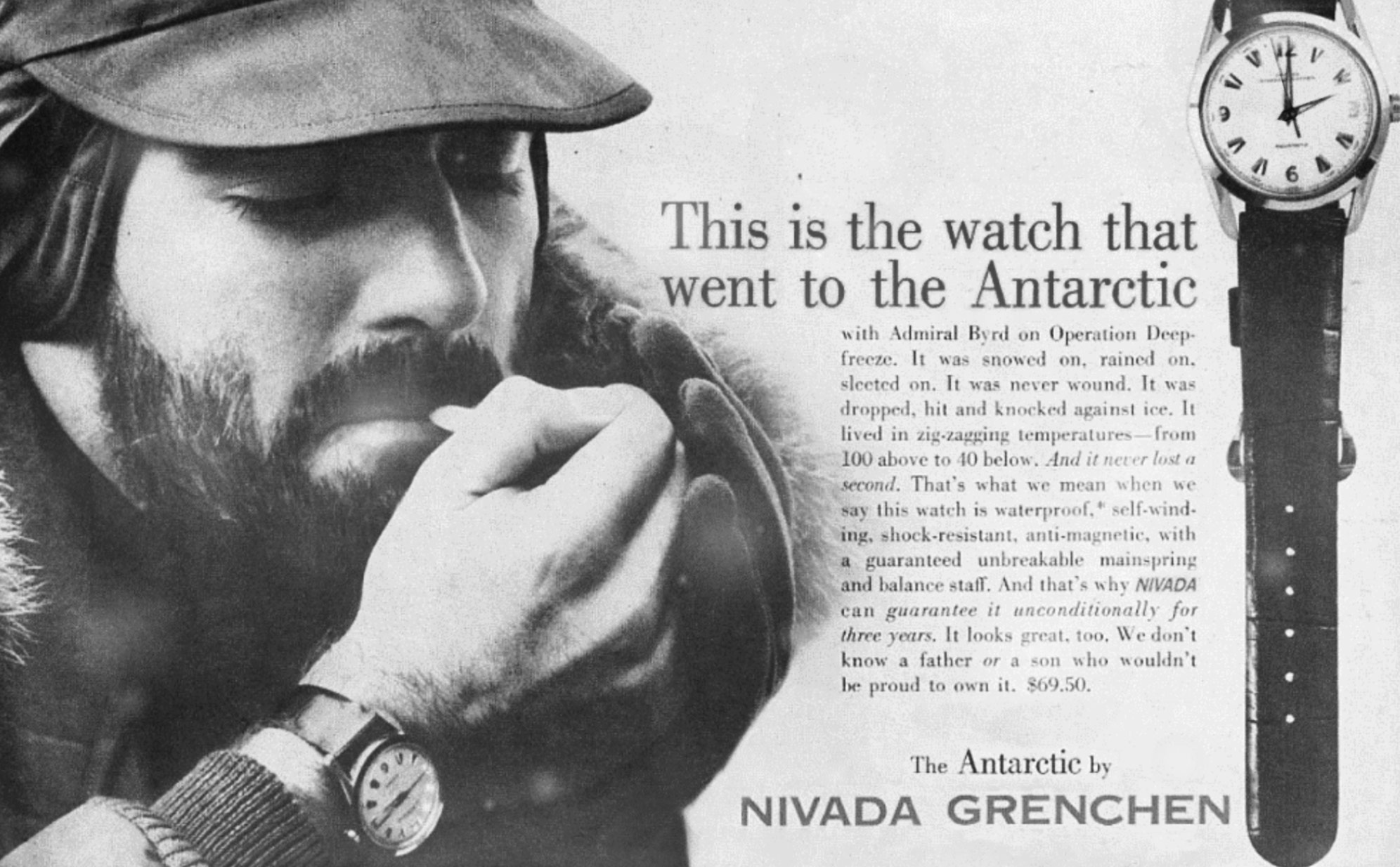 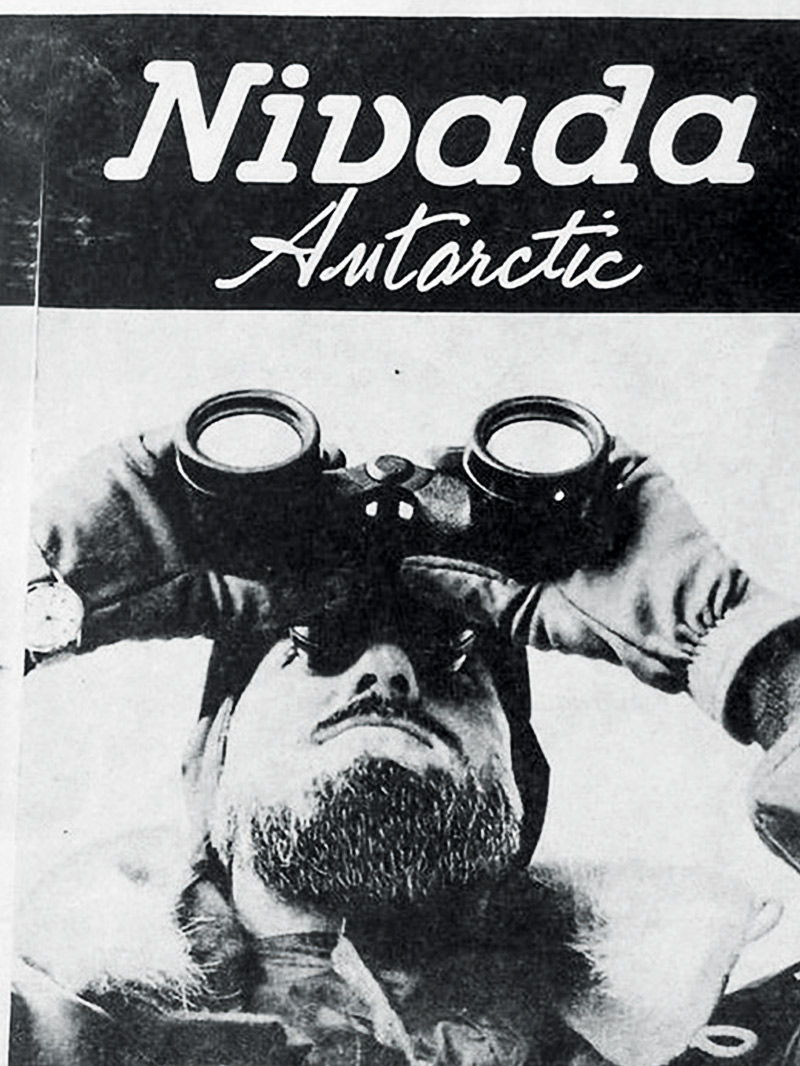 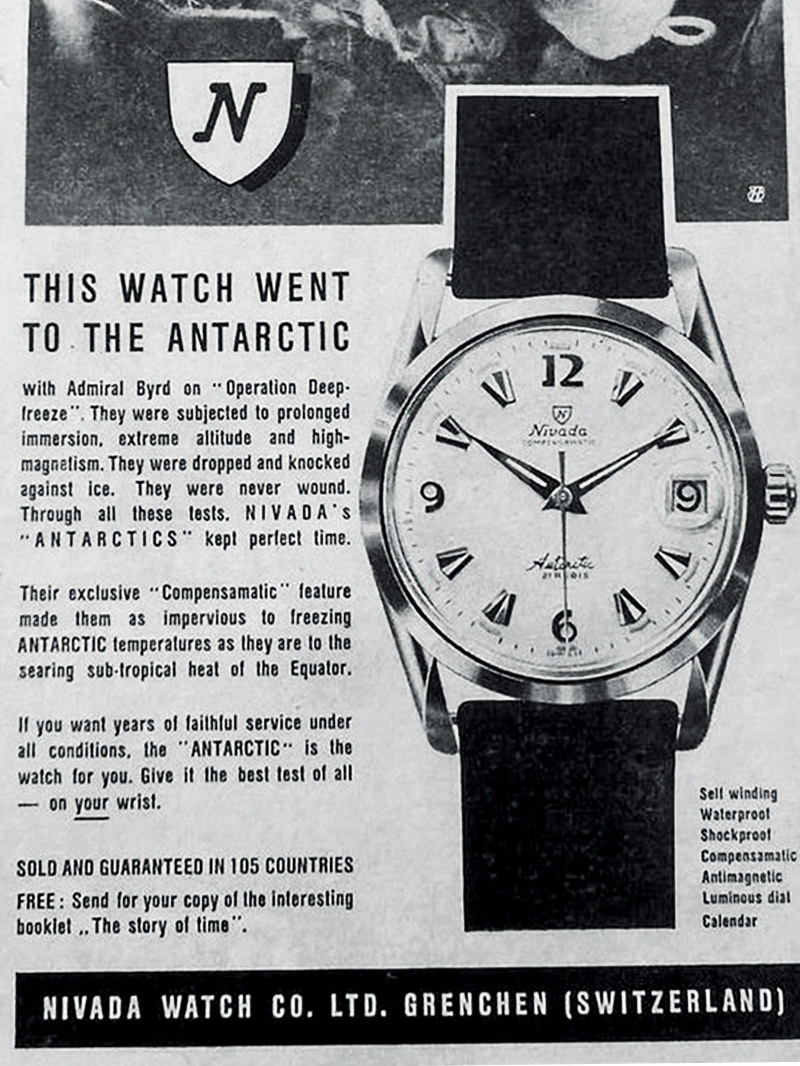 There were a number of different versions across the Antarctic I, II and III. Some had different indexes; some had different dials, including a fantastic (and rare) triangulation dial. There were even hidden crowns. Nivada really had fun playing within the limits of the case over the years.

Regardless of the variation, inside was an ETA movement, with the earliest version using ETA’s first automatic movement, the 1256 and later models (post 1955) used the replacement 2375. The latter was a more shock-resistance calibre that could take more of a beating but had the same 40-hour power reserve as its predecessor. 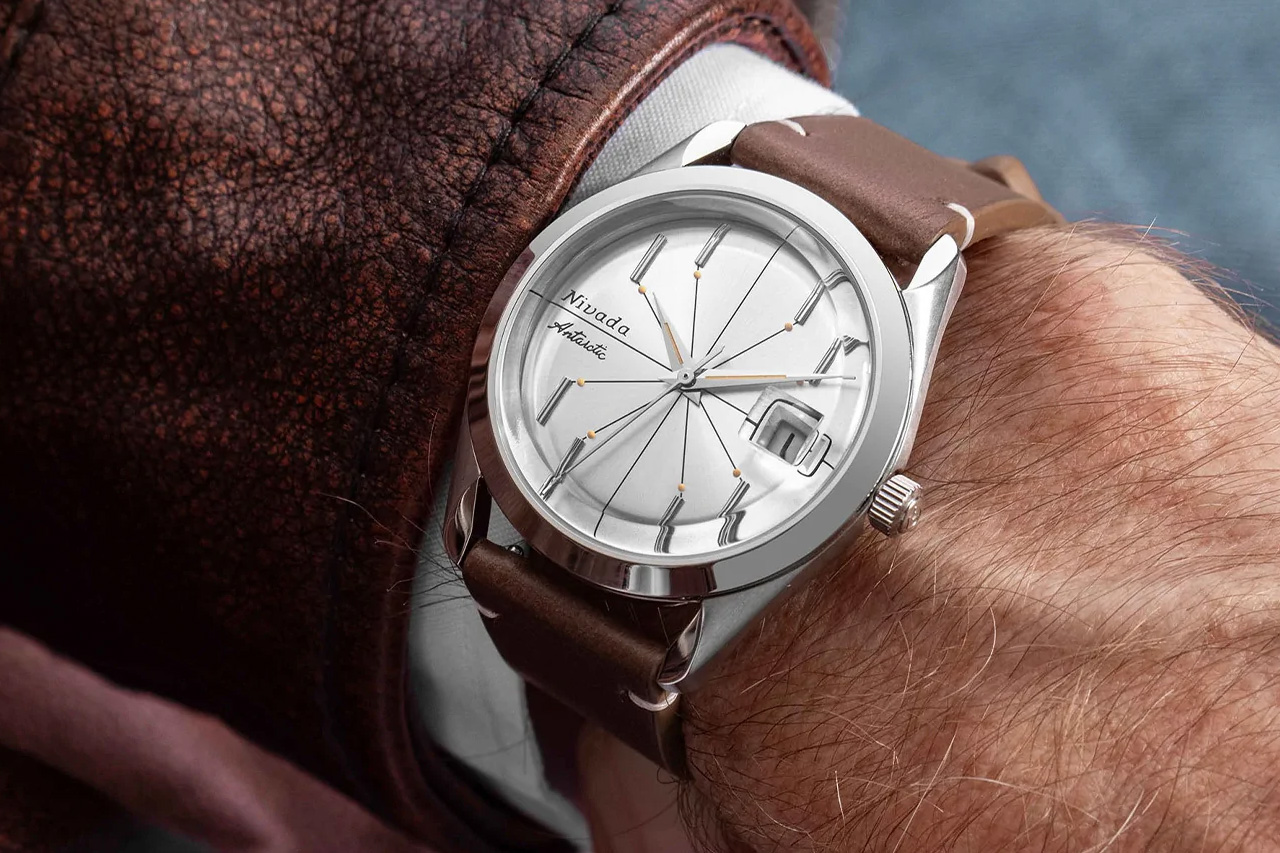 The Antarctic was a massive success for the brand. It’s not hard to see why. It wasn’t just as practical as any explorer’s watch, it looks better than most. In fact, it got enough goodwill that, despite losing the battle against quartz in the 1970s, Nivada Grenchen is back as a brand, largely due to the Antarctic. They even echoed that triangulation dial in the Antarctic Spider. The new models are more utilitarian than the originals which is a shame, but then you can get a decent condition piece from the 1950s for somewhere between £1,000 and £1,500.

The Antarctic might not have the cache of a Rolex Explorer, but between the unique dial execution and its expedition level endurance, it proved that you could have more fun with a beater than anyone expected.