Messrs Greubel and Forsey have evidently had a touch of cabin fever during lockdown as, rather than launching their small handful of pieces each year, they’ve upped their output pretty extensively. Yet whereas previously that meant a shiny new calibre or two, instead they seem to be adding a few new and very welcome variations of older pieces to their collection. Such as, for example the GMT Quadruple Tourbillon.

The original GMT Quadruple Tourbillon was an absolute beast of haute horology, released back in 2019 with one version and one version only. A combination of two of Greubel Forsey’s greatest pieces, it not only had their famous globe worldtimer-come-GMT function, but paired it with two bi-axis tourbillons. 705 components, 3 patents and a whole lot of watch. It was also incredibly heavy. To fit everything in and still get that sublime architecture the independent manufacture is known for, the white gold case was 46.5mm across. That’s weighty. Unfortunately, it also made it a little uncomfortable to wear for long periods of time, at least for me.

In the wake of the Greubel Forsey Sports series (read our review here), wearability now seems very much on the agenda and now the GMT Quadruple Tourbillon is available in titanium, reducing its weight by a full third. It’s also far more practical as it’s less likely to scratch than the gold, if practicality was what you were after from this kind of watch. It’s also been given a slight facelift with a flash of blue for the local time dial rather than the charcoal grey used before and it makes a world of different, matching the colour of the titanium globe.

Otherwise, this is the watch we know and love. That means twin bi-axis tourbillons inclined to 30 degrees, designed to average out and correct for the effects of gravity between them and the 24-hour globe, visible through the sapphire case side. 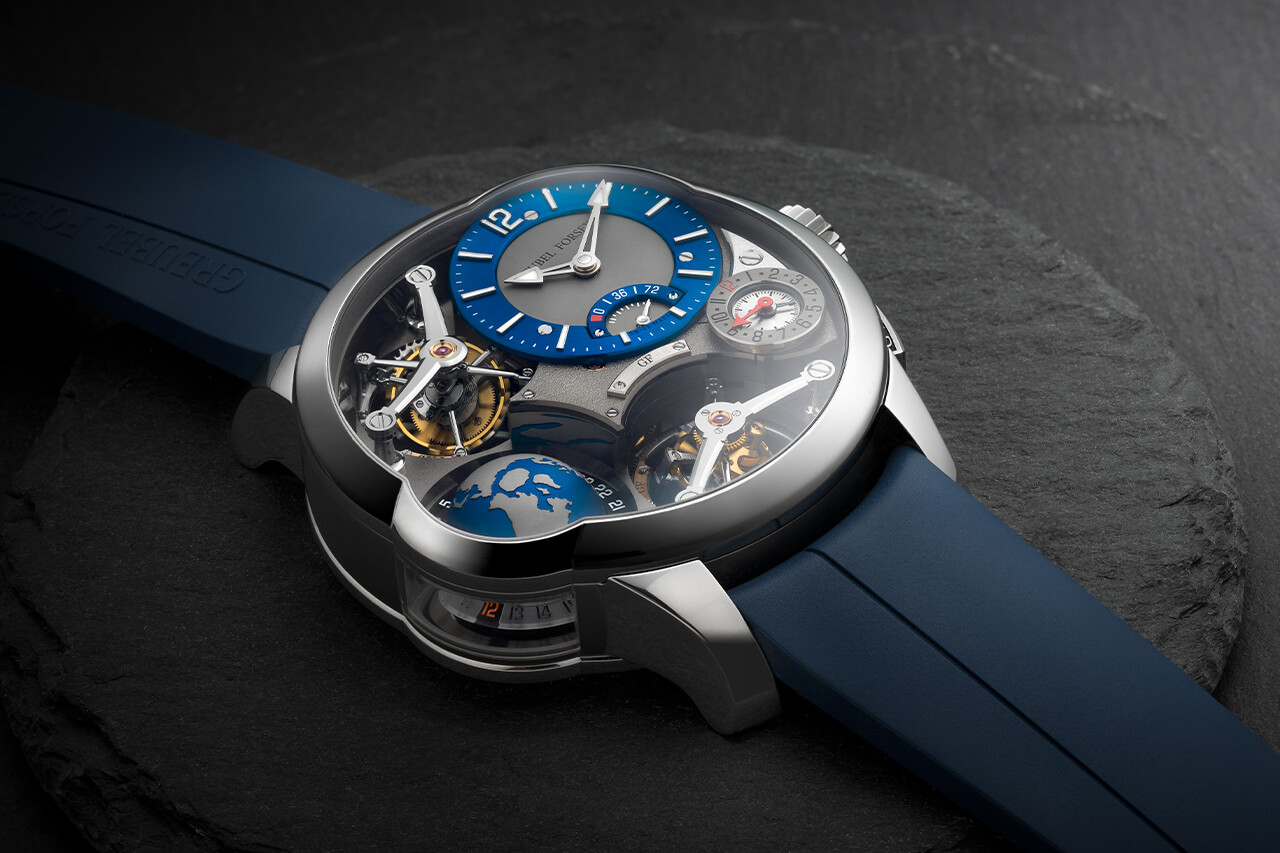 It has all the superlative finishing you’d expect – which is impressive as titanium’s a good deal harder to work with than gold – and finished on a matching blue strap, it’s a much more wearable take on Greubel Forsey’s signature brand of haute horology.