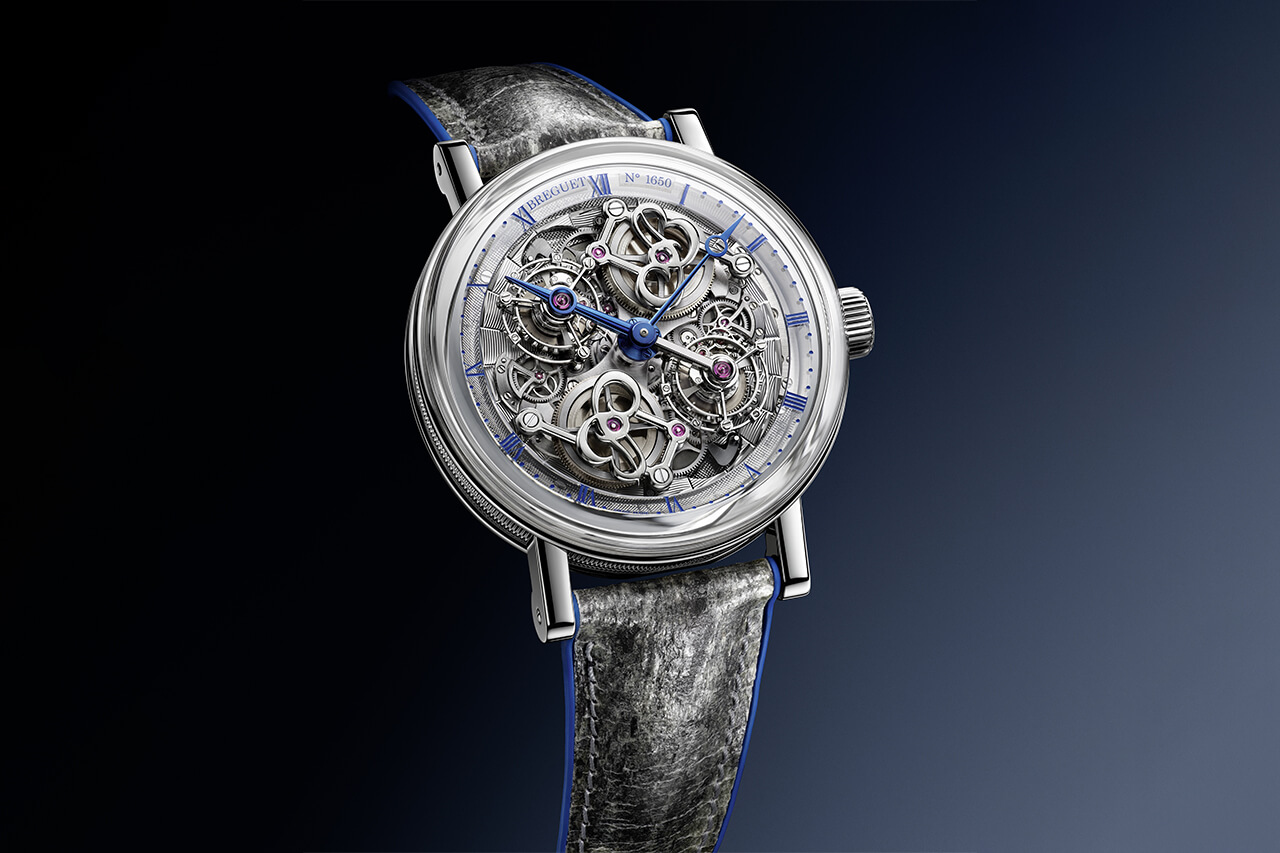 With tourbillons becoming almost passe in the world of haute horology, it’s almost easy to forget that the complication has its roots in Breguet. Well, the Swiss heritage watchmaker is making damn sure we all remember that again with the superlative update to their 2015 gravity-defying masterpiece, the Classique Double Tourbillon 5345 Quai De L’Horloge.

This is a double tourbillon in the truest sense. By that I mean, instead of just having two tourbillons somewhere in the mechanism, the pair of black-polished cages orbit around a central differential, rotating the entire dial as they go. This means that it’s not just two tourbillons; it’s two tourbillons working in tandem under the auspices of a third. 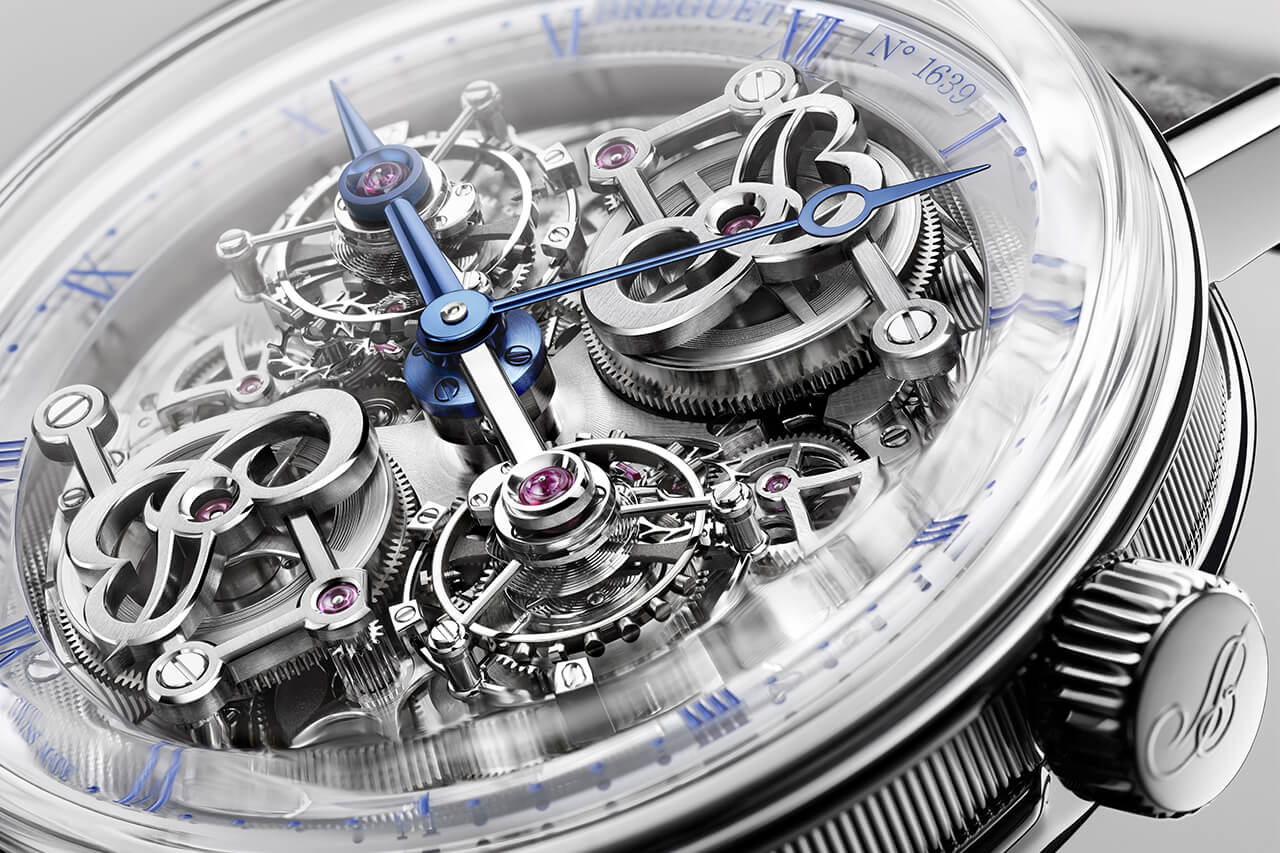 As the pair make one rotation of the dial every 12 hours, the upper bridge holding everything in line doubles as the hour hand, hence it’s blued, pointed shape. The minute hand therefore is easy to pick out; it’s the only hand on the watch.

Unlike the previous version, the rest of the watch has been skeletonised. The guilloche you can see around the various components is done directly onto the plate they’re set into. The outer ring that passes for a dial is sapphire crystal that’s then been precision-engraved with the Roman numerals and minute markers. Subtle enough to miss, the metal underneath the numerals has also been engraved to give the numerals a more pronounced shadow.

The only element that I’m not keen on are the barrel covers, which are in the form of Breguet’s flourished B. Personally I think the languid curves are a little at odds with the rest of the watch, even if they are impressively done. 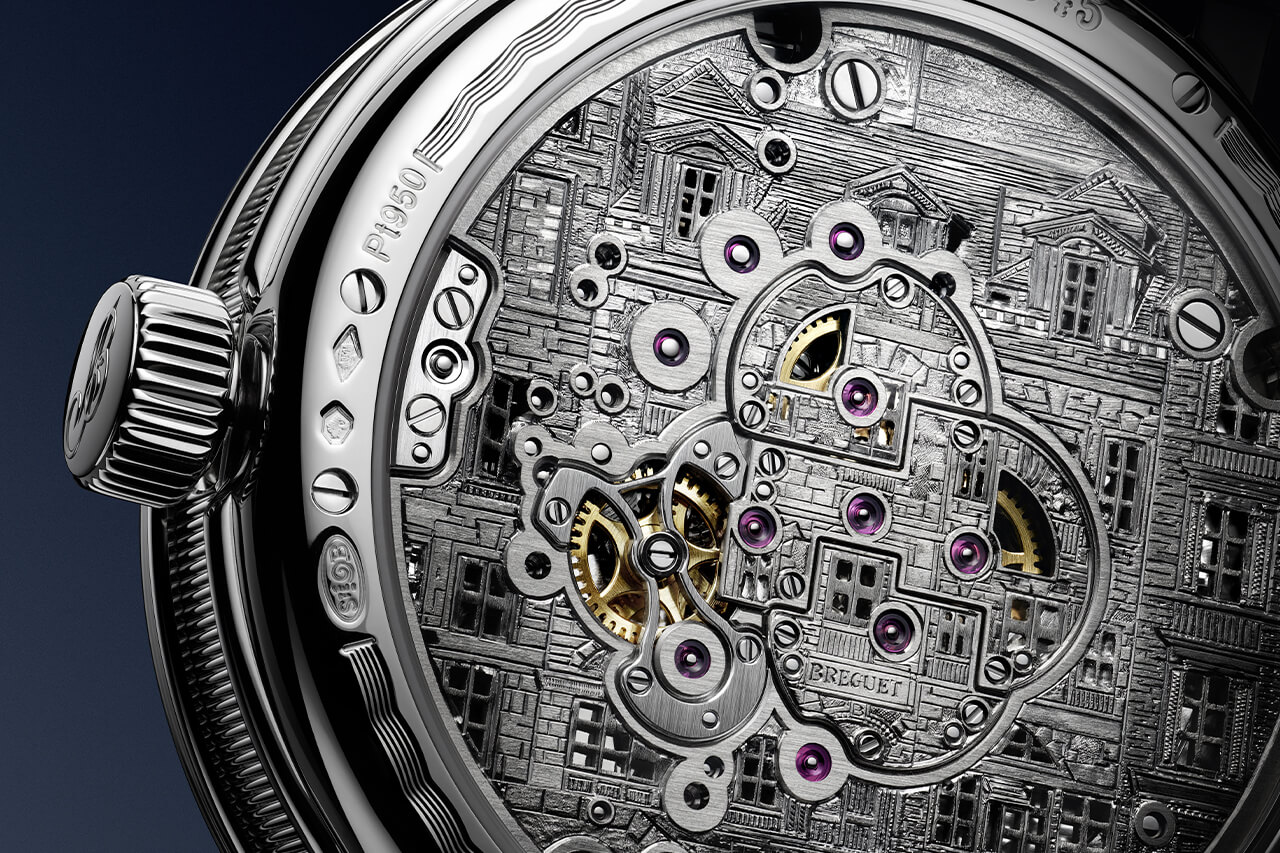 Mechanically, the Classique Double Tourbillon 5345 is a masterclass in engineering, but what takes it to the next level in terms of finishing is the latter part of the name, the Quai De L’Horloge. That’s the area that Breguet had his original workshop (No. 39 specifically), a depiction of which has been engraved across the entire reverse of the movement. 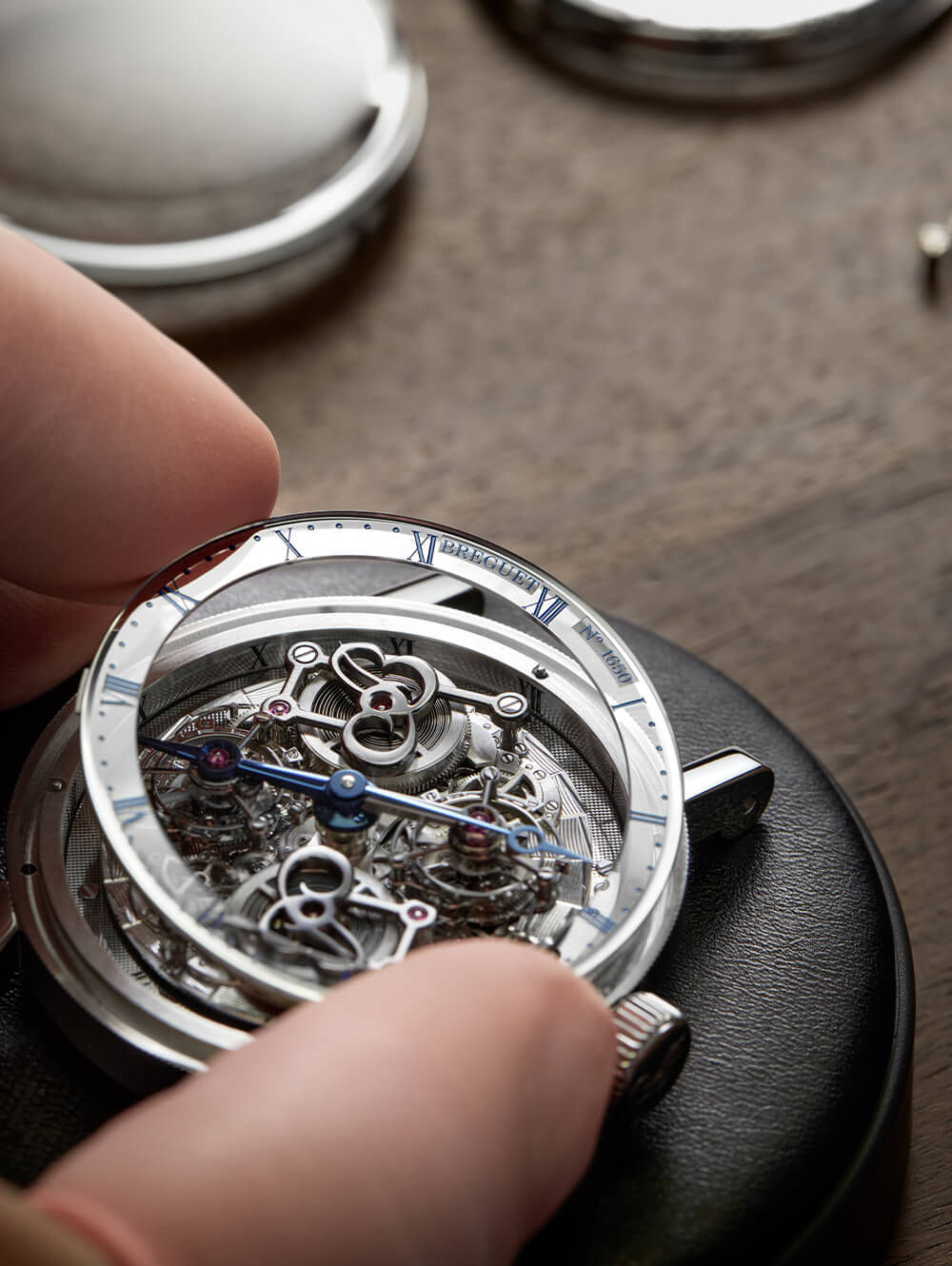 The detail is immaculate, as is the fit of the bridges to keep as close to a complete picture as possible, with just a few rubies showing through. Apparently, you can spot a woman at one of the windows; I spend far too much time in front of a screen nowadays to find it myself. Either way, it’s about as ornate as these things come.

Because of the nature of the complication, Breguet has had to go for a large, 46mm platinum case, much bigger than their usual fare. There’s not really any choice in that; I’ve been assured that this is as small as Breguet can make the complication at the moment, meaning if I want to wear it myself, I need to get lifting.

Specs-wise the hand-wound movement has a 50-hour power reserve, a frequency of 2.5hz and a grand total of 738 components throughout the piece. There’s also a security system to prevent over-winding. 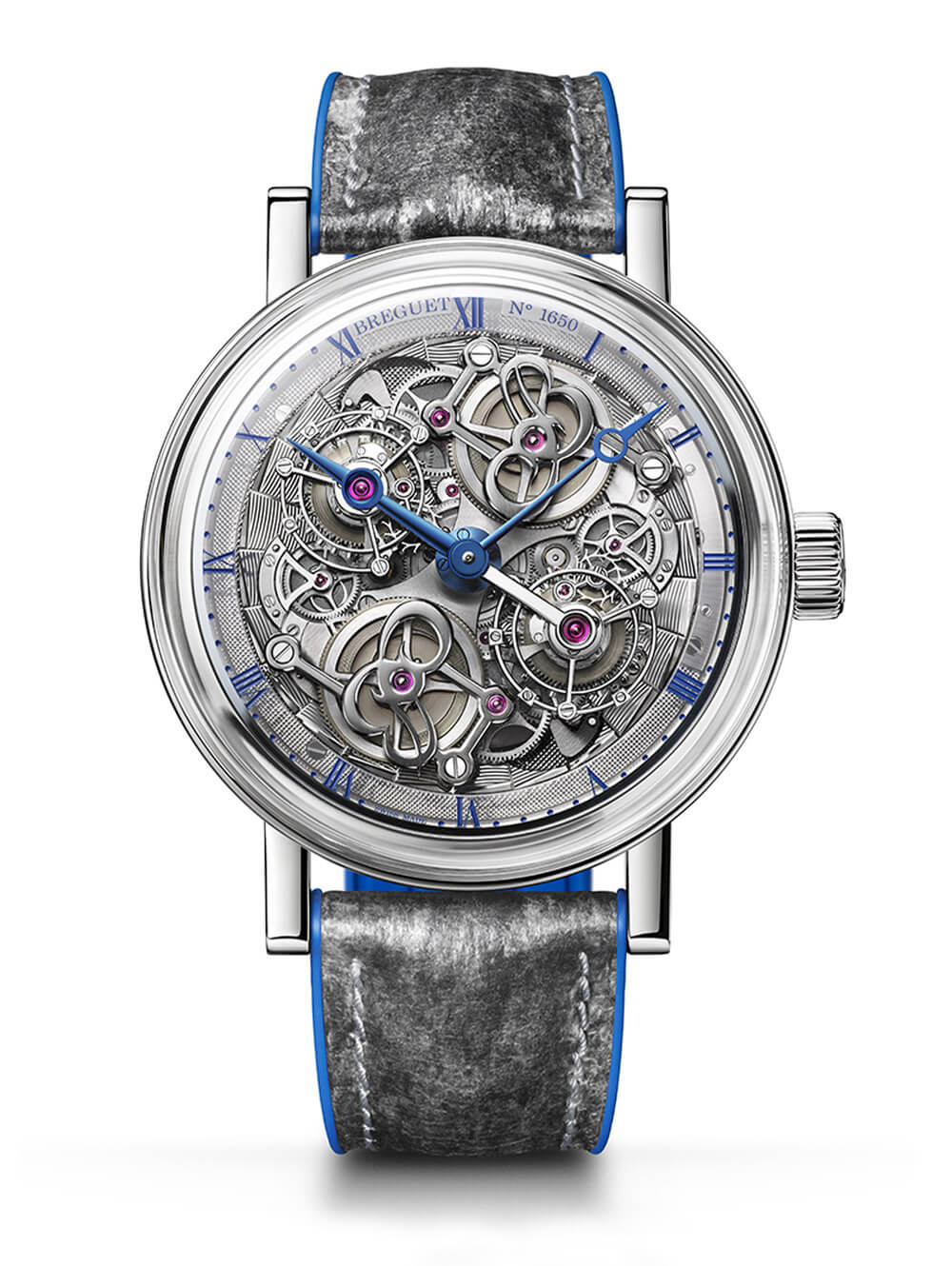 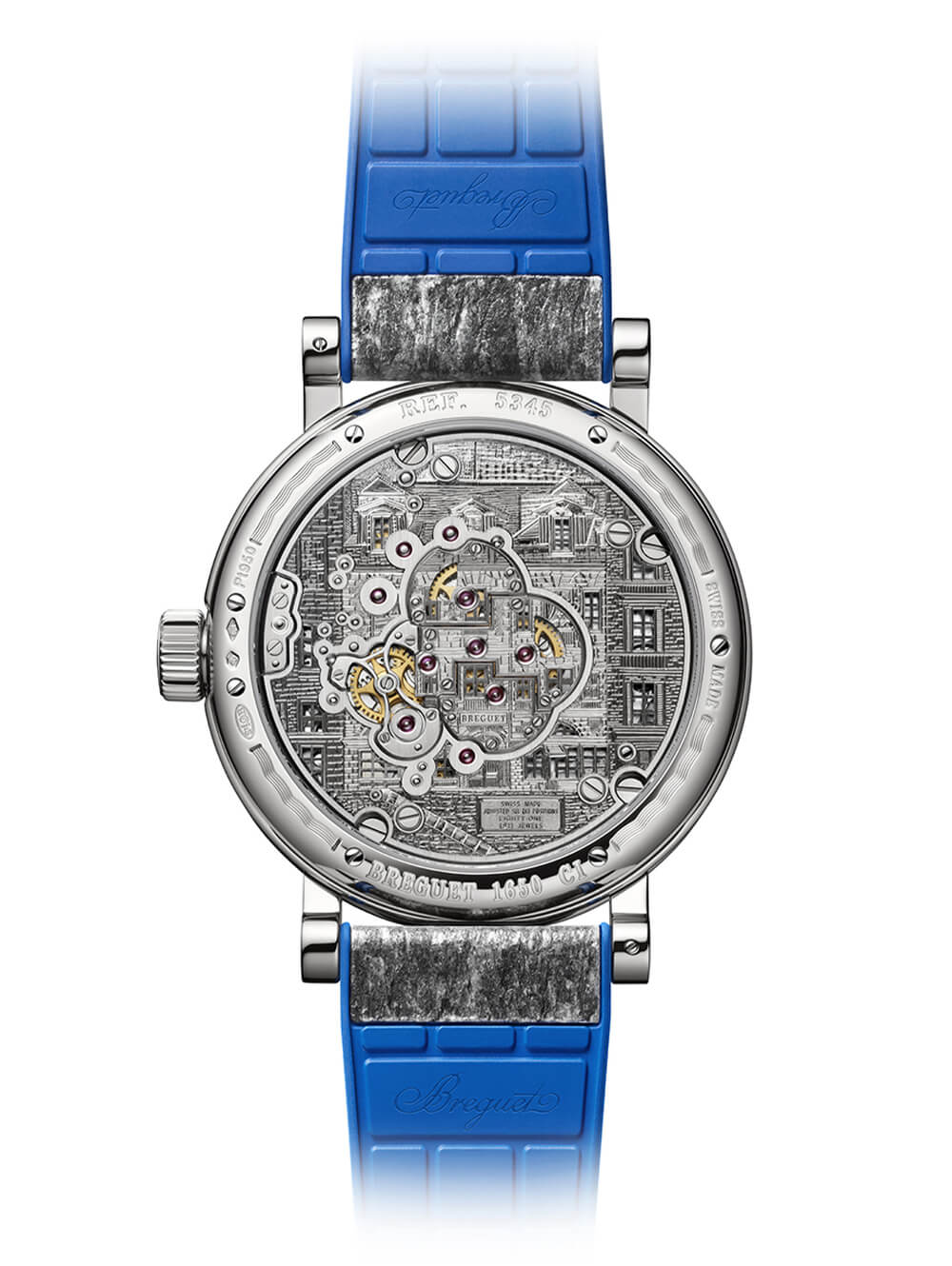 Possibly the oddest thing about the watch though is the strap, which is made from natural slate with a rubber backing. Why Breguet opted for such an off-kilter material god only knows. I’m going to wait until trying it on to make any judgements on it, but it’s eye-catching that’s for sure, all the more so with the blue contrast stitching to match the numerals and hands on the watch proper.

Once again, there are tourbillons popping up everywhere, enough that the grand complications lost some of its gloss over the years. It takes something special to make it shine again, and the Breguet Classique Double Tourbillon 5345 is very special indeed.