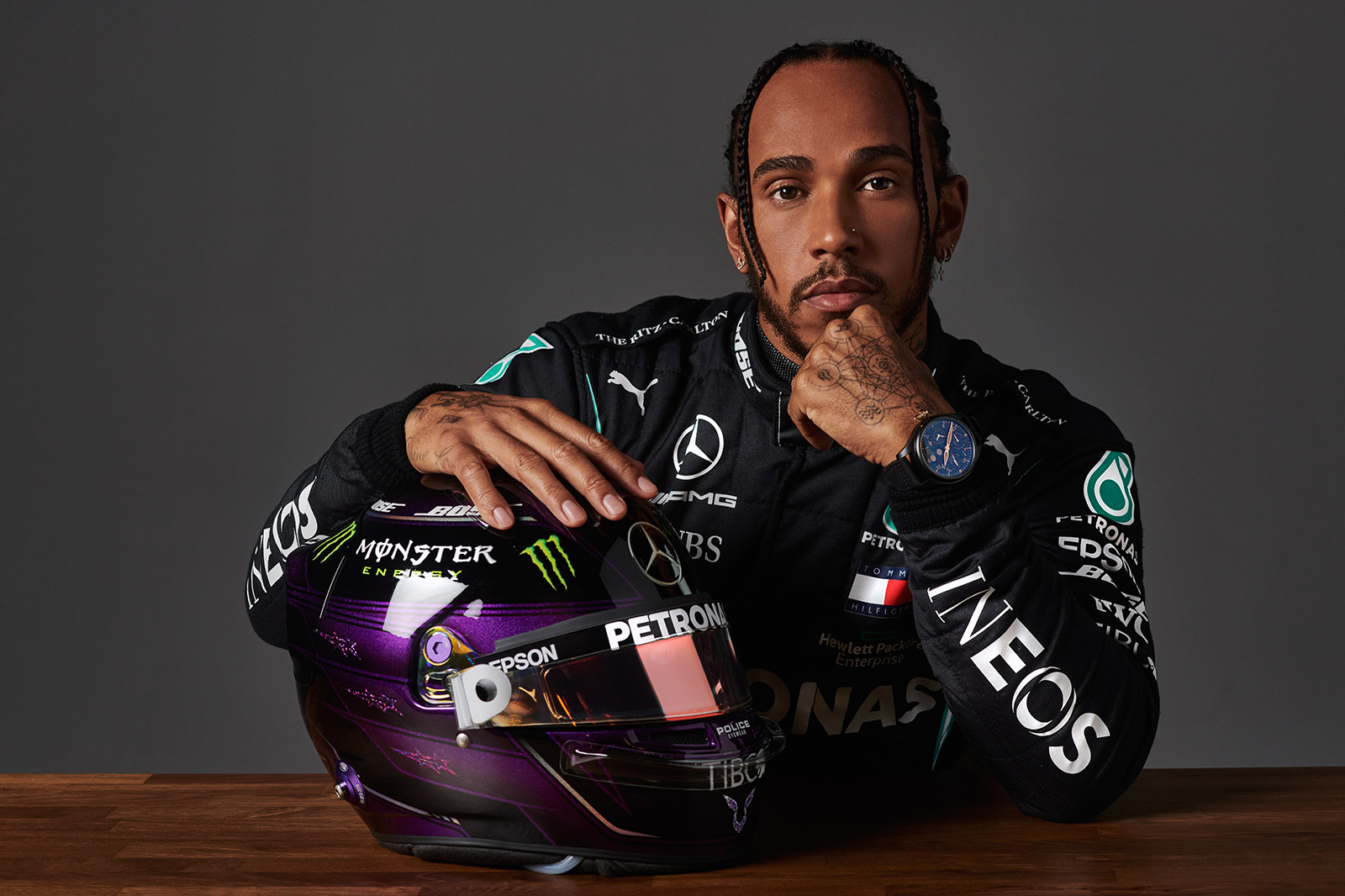 Lewis Hamilton is set to become the greatest Formula 1 racer of all time. That’s not hyperbole; it’s fact. The British star is on track to nab his eighth championship – if he can get past an incredibly competitive Max Verstappen – and celebrated his unprecedented 100th Grand Prix win in Sochi last month.

Most of us would be out celebrating. Yes, Covid’s an ever-present danger, but who could resist a few magnums? Lewis, apparently. It shouldn’t come as any surprise by now that Hamilton is incredibly down-to-earth. Sure, we caught him for a few minutes, midway through a hectic racing schedule, but between his chilled vibe and loose, calm way of talking, he’s still very much the lad from Stevenage he grew up as. And despite his legendary status, at heart the racer’s a bit of a homebody. 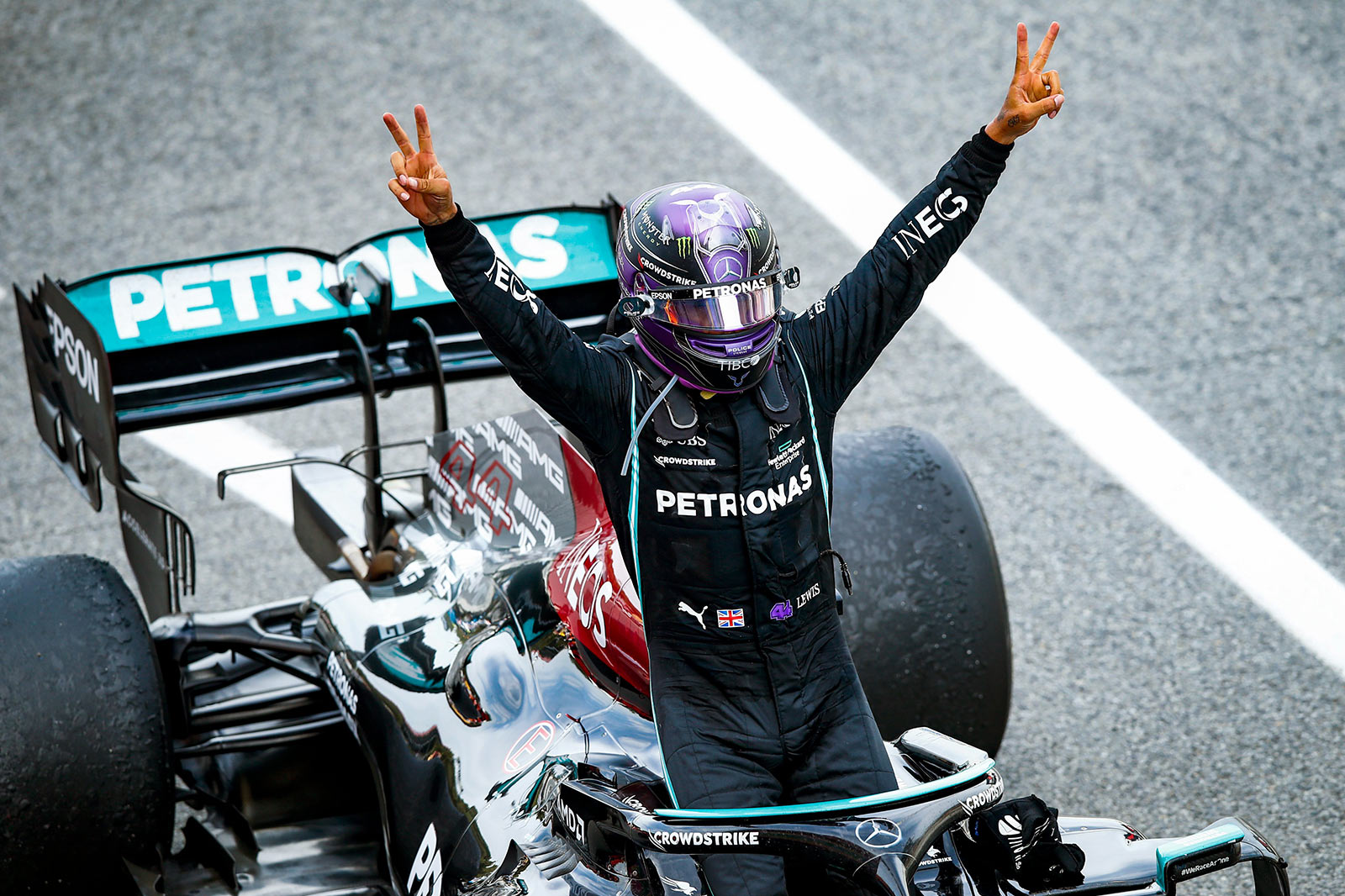 “It’s crazy these last 18 months. Normally in a season when you experience these things, your 100th Grand Prix, you know, you’d be celebrating with the team but we’re still working under these constraints so I’ve not celebrated yet. These days my kind of celebration is getting home, putting my feet up, have takeaway and watch a movie – not that exciting!”

Honestly, that’s probably something we can all appreciate, especially if your day-to-day is as intense as the schedule of an F1 team. Between that and visiting his dad and step mum – “I wanted to see them for the day and surprise them as I’d not been to see them where they live for years. It was a really special moment!” – Hamilton’s surprisingly down-to-earth for a legend. He’s not even considered what an eighth win would actually mean for him. 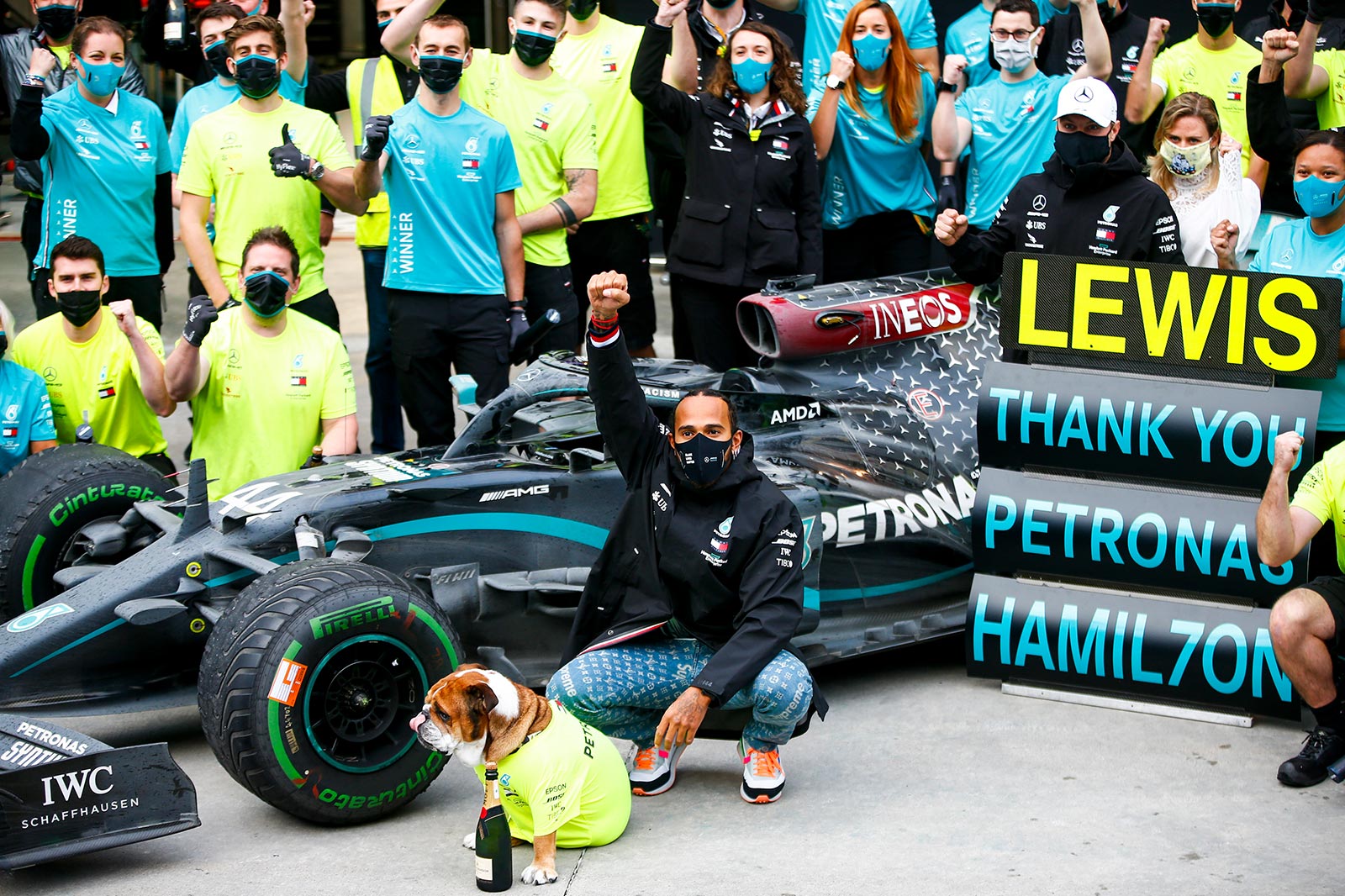 “It’s difficult to really capture what it could feel like. Winning the world championship last year with everything that was going on with the pandemic and BLM was way more emotional than I was expecting. Weeks went by when we weren’t racing, and I missed it so much. Now being in a season that’s super tight, we could win it, could not, I can’t imagine what it would be like.”

At least he’s not dwelling on it too much. That kind of pressure can mount up. In the hypothetical though, should he win the eighth, where would he go from there? Well, given the form Hamilton’s still in, it’s no surprise that the answer is pretty much in the same direction.

“Well, I’m signed for two more years, and I love driving, I love what I do still, the intensity of it, the travelling, everything. I don’t know what’s after that. Where do I go from 100 wins? I’m still in the mix of racing with the youngsters but I’ve still got it, still amongst them – and I’m inspired by other racers with long careers, like Valentino [Rossi], so I’m hoping to be around for a while yet.” 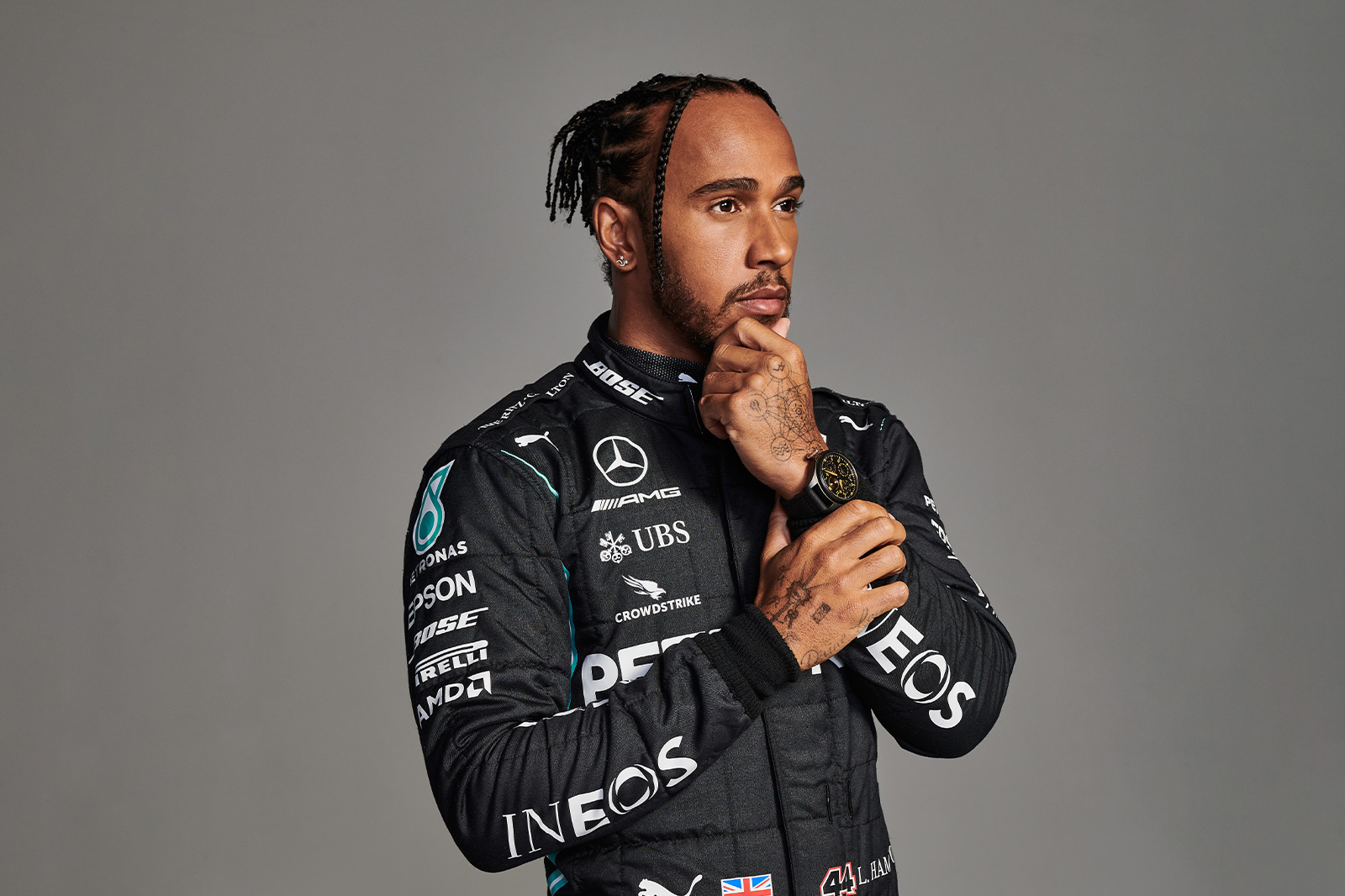 Bad news for those youngsters, then. Still, it doesn’t seem like tallying wins and stuffing his already crowded trophy cabinet are really what drive Hamilton on the track. As his dream celebration suggests, he’s not the kind of guy that just wants the pay-out at the end and is more concerned with changing Formula 1 for the better.

“F1 shouldn’t be inaccessible just because of where someone comes from. I know I can always be replaced. Someone else will come and take my job when I’m done, so it’s about a question of how do I maximise my time and energy with the platform I have? How can I move the needle in a positive way? I want to look back in 10, 20 years and think yes, now the sport looks like the rest of the world that’s watching. That’s what’s been burning in me.” 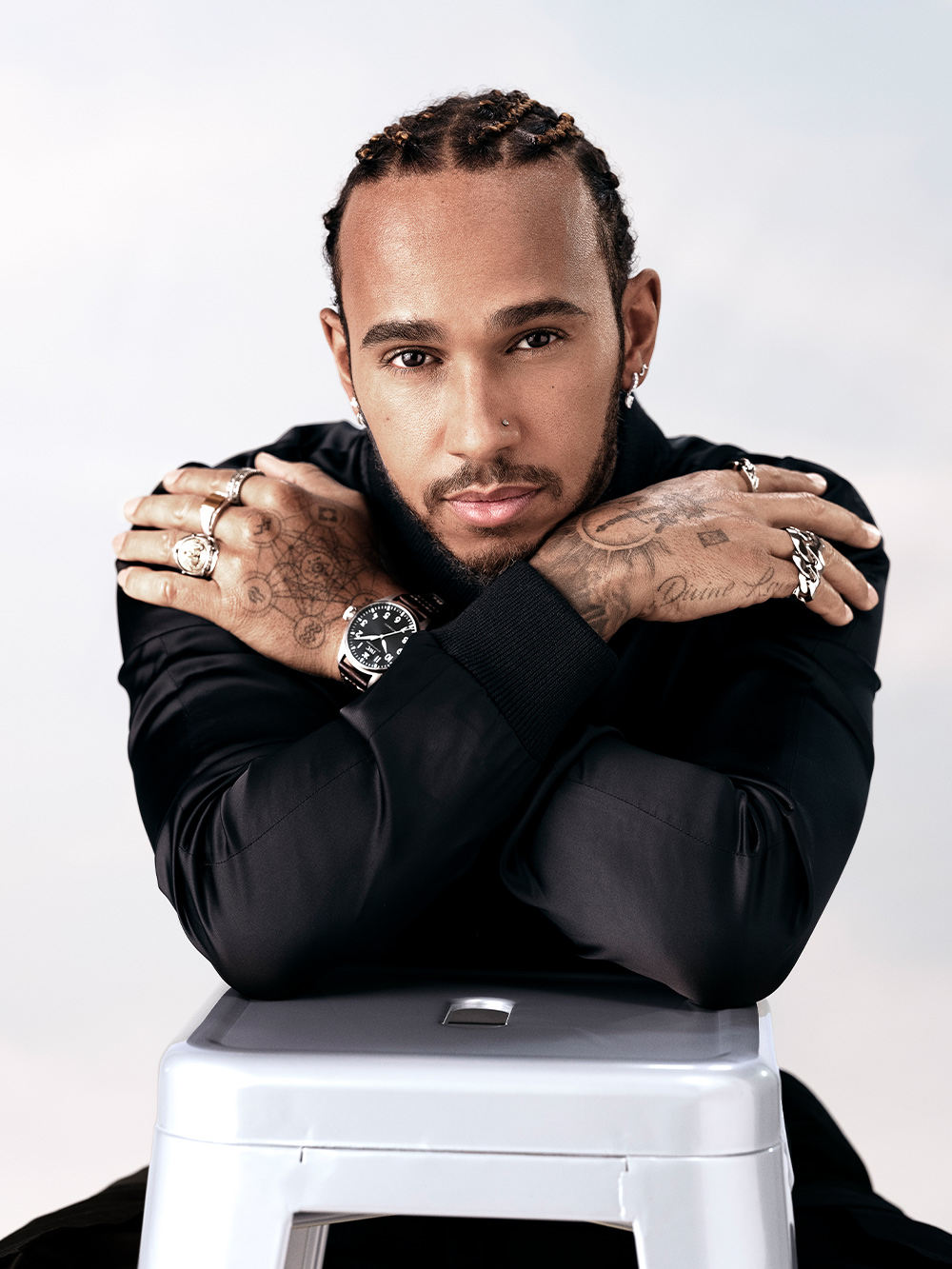 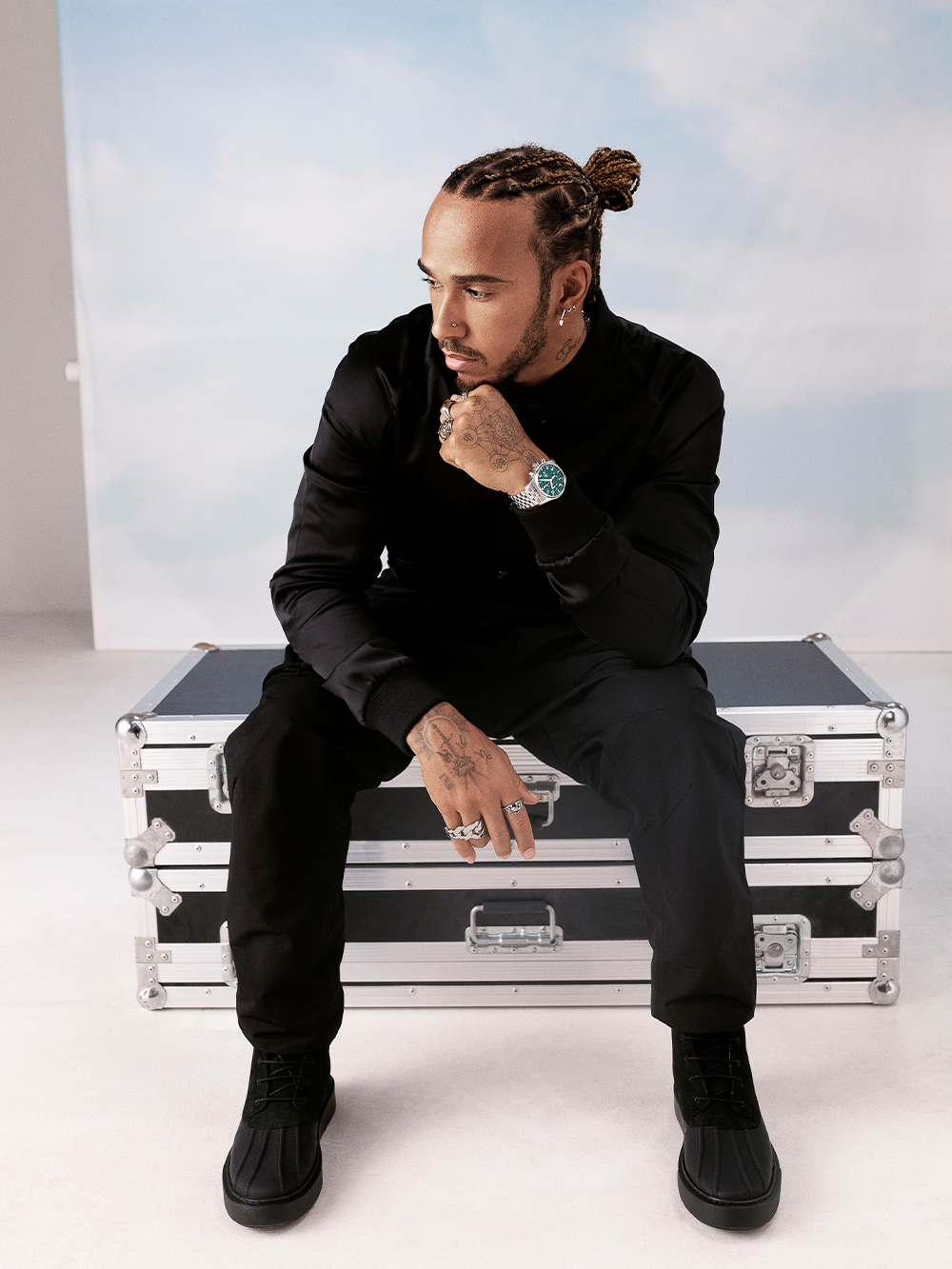 It’s something that’s definitely needed in a sport that’s anything but easily accessible. But this is our Hedonism issue, so lovely as the sentiment is, it would be remiss of us to not discuss a few more materialistic gains with Hamilton. After all, he’s one of the most stylish racers around; so, what’s his most important style essential?

“I feel naked without a watch. You look at James Bond, the watch is what sets off his suit, his look. I’ve been wearing them a long time, since I got my first from Argos. I remember saving up and going to Argos in Stevenage and buying this watch just because I wanted to uplift my look.” 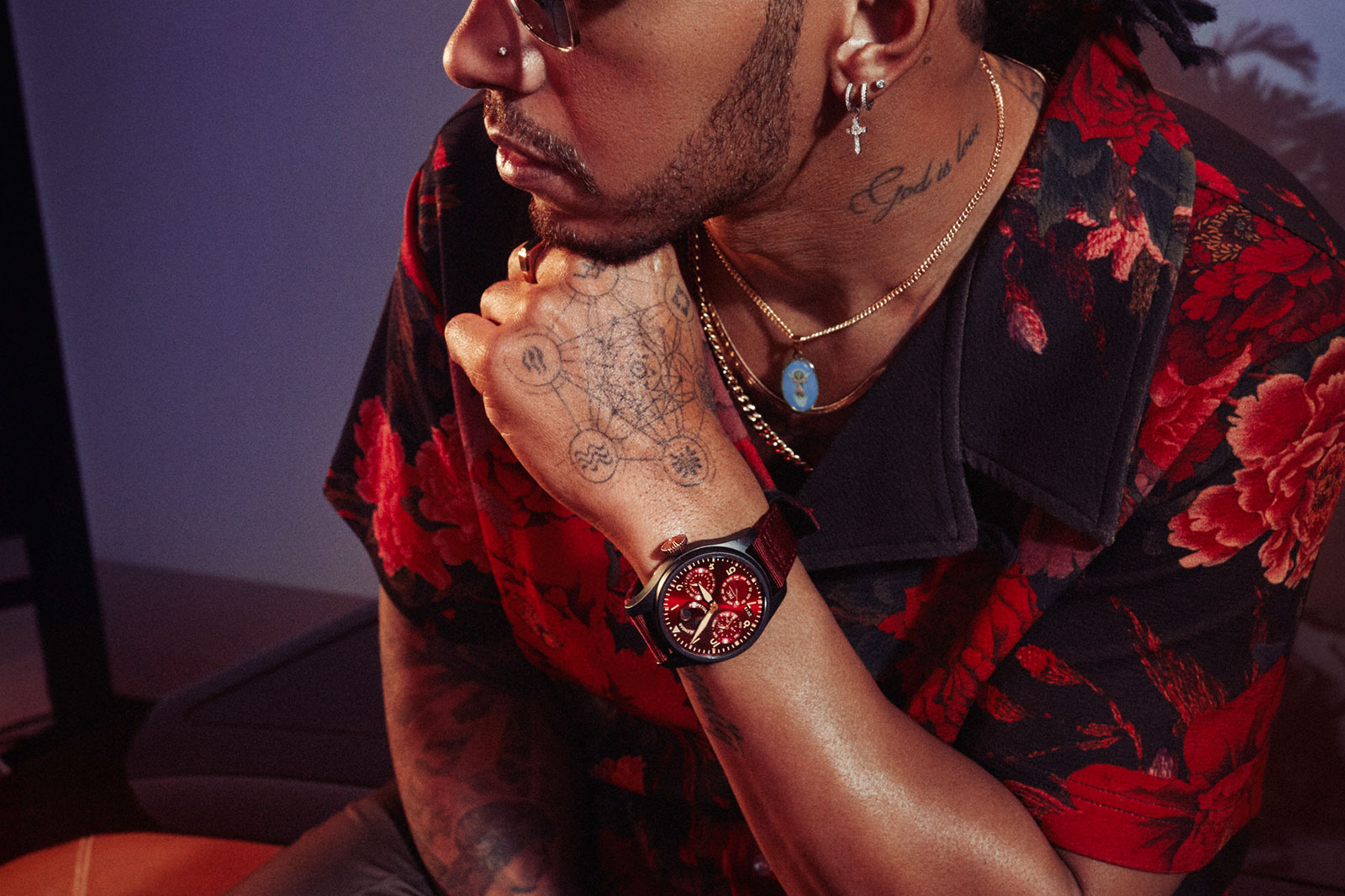 While we didn’t want to ask precisely what watch that was, there’s little doubt that Hamilton’s upped his horological game in the last few years thanks in good part to his partnership with IWC. Like his own team, it’s not a partnership he’s been passive in, either, releasing a particularly cool, collaborative burgundy perpetual calendar. That’s not what he has on today, however.

“I’m wearing the big pilot at the moment. I love the weight, the size. I have wide wrists and I like knowing it’s there. It’s the Top Gun edition, I’ve always been a big fan [of the movie] and love fighter jets. I’m thinking of getting one soon. So that’s what drew me initially. It’s not great for a suit though; then I wear a Portofino instead.” 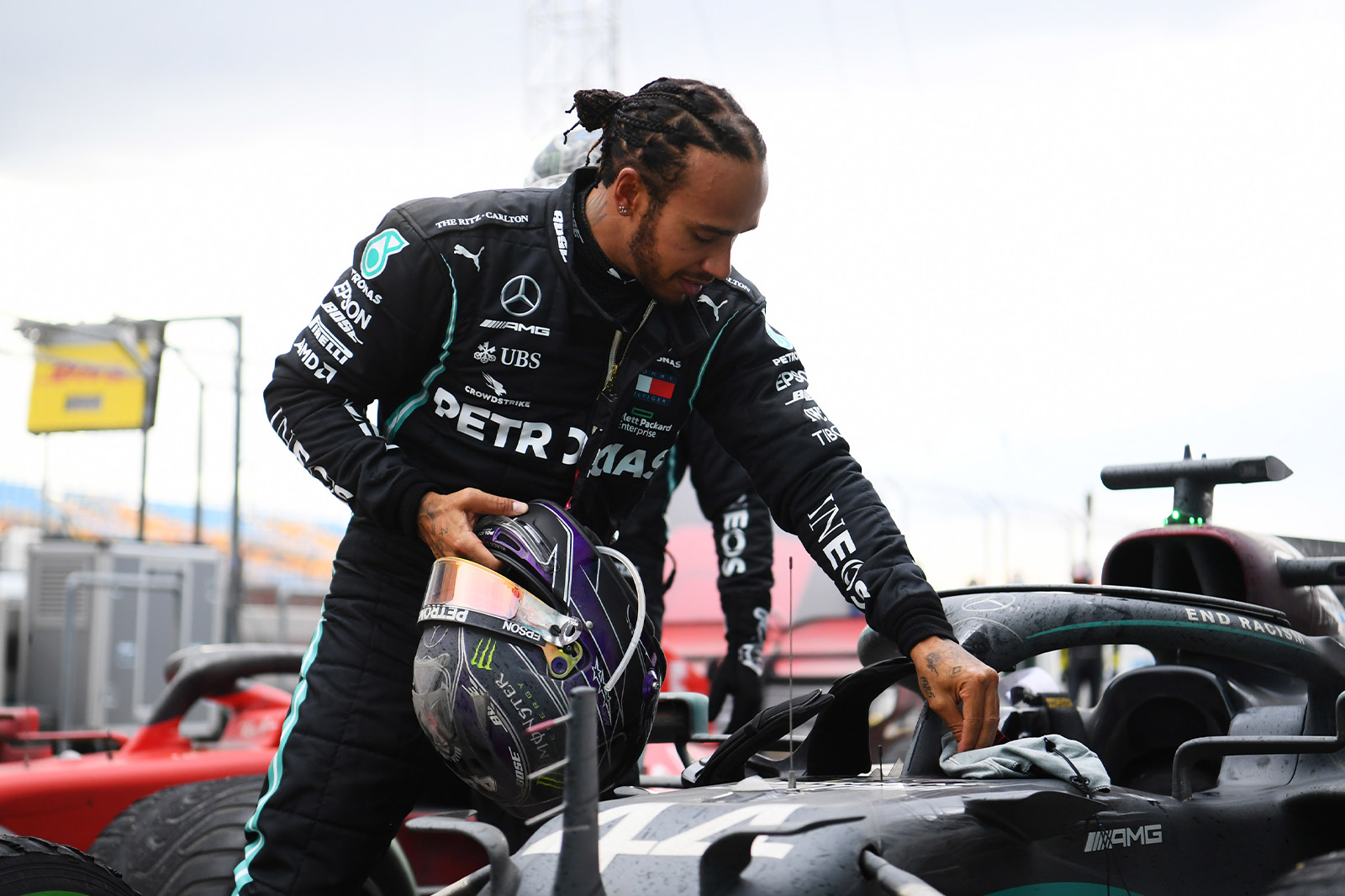 Hamilton in a fighter jet is legitimately a terrifying thought, but it makes sense. When he’s not kicking back with a takeaway, you’re more likely to find him relaxing with a parachute on his back on his off days: “I’m an adrenaline junkie! Skydiving, surfing, rollercoasters, I love all that stuff!”

So, beside a watch on his wrist and a dose of the high-octane every now and then, what is it that Lewis Hamilton can’t live without? What gets the world’s greatest racer up in the morning? A killer soundtrack, that’s what.

“I need music. It’s the one thing I need in my life that I love, that I can’t live without. At home I have my vinyl, my CDs and I’ve always got something playing. Every morning I play something in the shower to get me in the mood for the day. It’s the only thing that keeps me sane.”