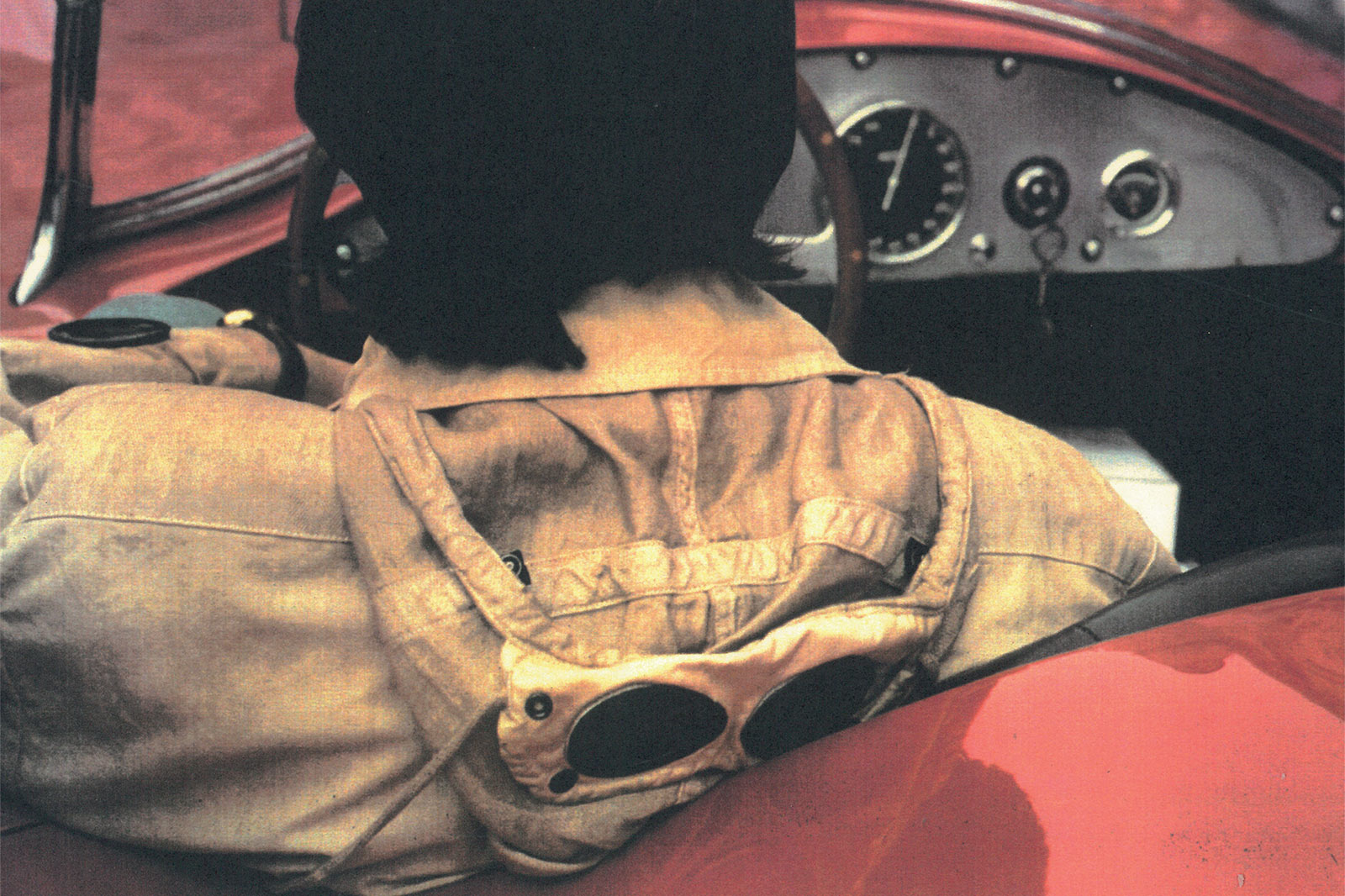 Mille Miglia: two words that live in the heart of any red-blooded motorsport enthusiast. To the initiated, they conjure images of elegant vintage cars, sunkissed Italian scenery and winding country roads, not to mention the odd deadly accident. But how did they find their way into the menswear vernacular? And, even more confusingly, onto the lager-soaked terraces of British football grounds? The answer, oddly enough, comes in jacket form.

In the world of men’s fashion C.P. Company’s Mille Miglia goggle jacket is every bit as iconic as the historic race from which it takes its name. Instantly recognisable with its trademark goggle hood and large watch-viewer window, it has inspired many a stylist over the years, spurred more than its share of imitations and, speaking from personal experience, ignited at least one lifelong obsession with outerwear. 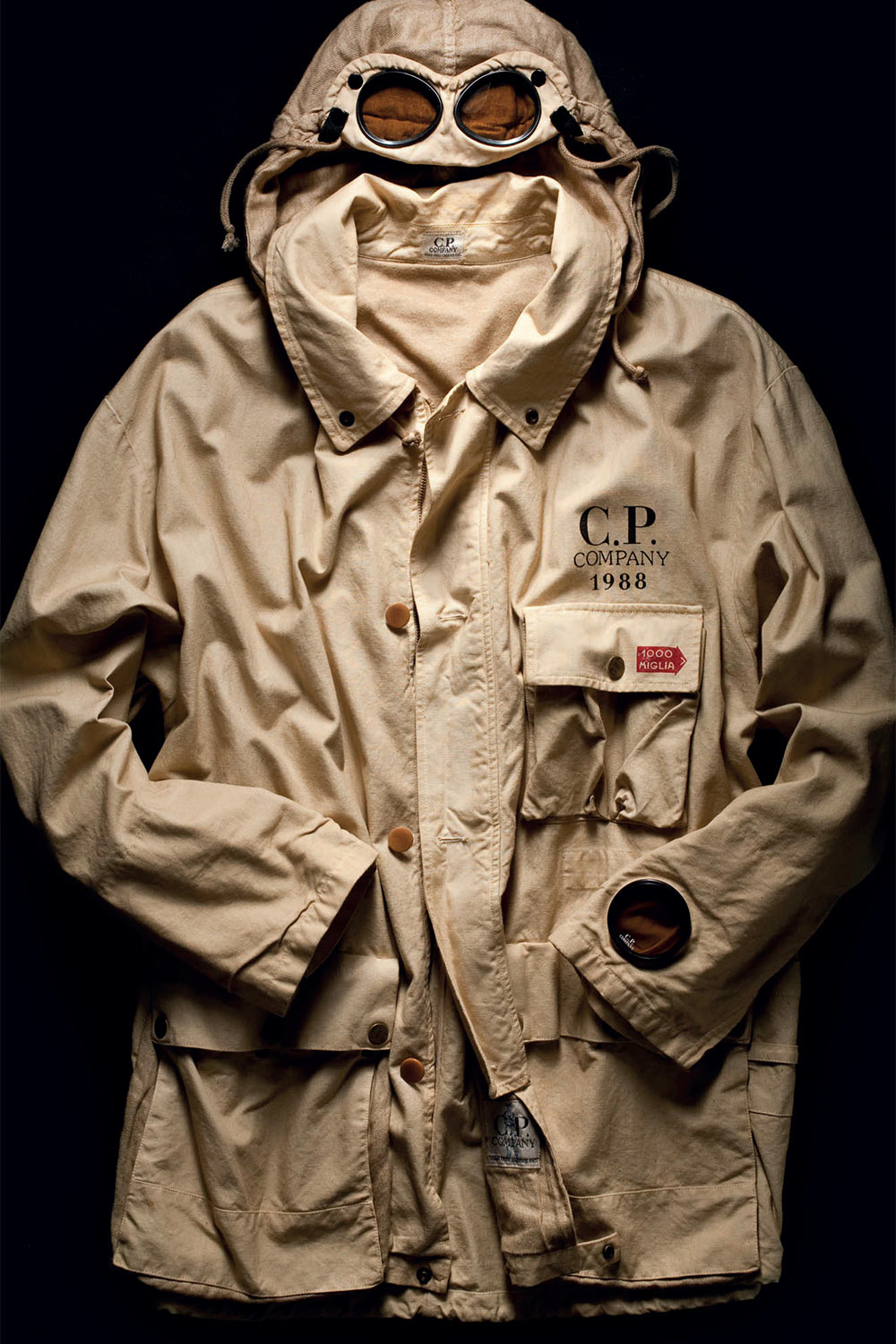 The original Goggle jacket by C.P. Company from 1988.

The jacket is the work of revered Italian designer, the late Massimo Osti. Many know him as the founder of luxury sportswear label Stone Island, but C.P. Company was his first and arguably most influential project.

The Mille Miglia goggle jacket is considered by many to be Osti’s magnum opus, but it wouldn’t exist as we know it today had it not been for a 1988 sponsorship deal with Italy’s most prestigious motoring event. 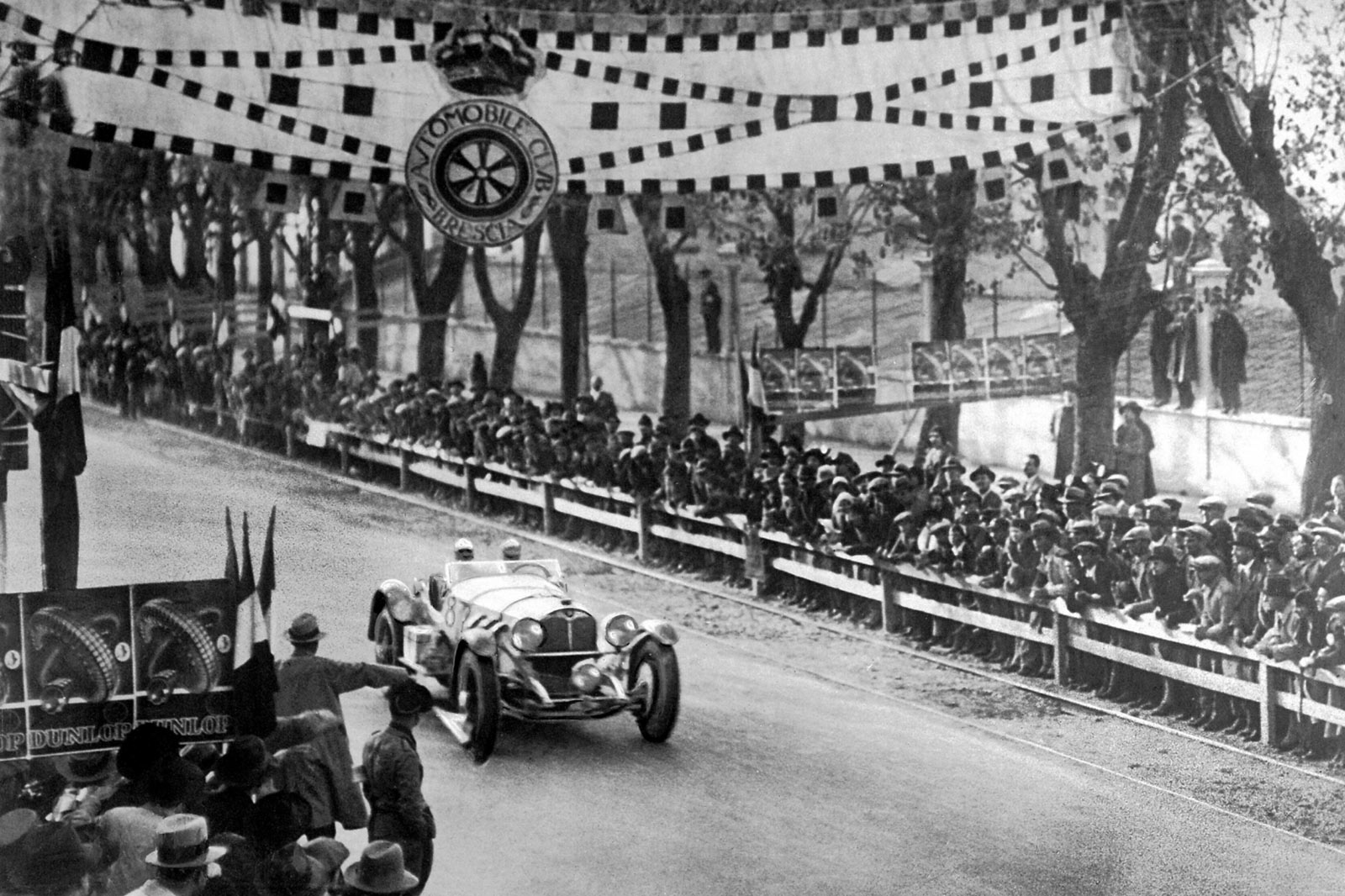 First held in 1927, the Mille Miglia was a gruelling endurance race, with the world’s top drivers battling it out to cover a challenging 1,000-mile course in the fastest time. The route was a gargantuan loop through the heartlands of northern Italy, speeding from Brescia to Rome and back, all through the day and night, with competitors often employing sneaky tactics to gain an advantage over their rivals.

In one famous instance, Italian driver Tazio Nuvolari killed his car’s headlights in the final miles of the 1930 edition and, under a cover of darkness, sped past the oblivious race leader and on to victory. 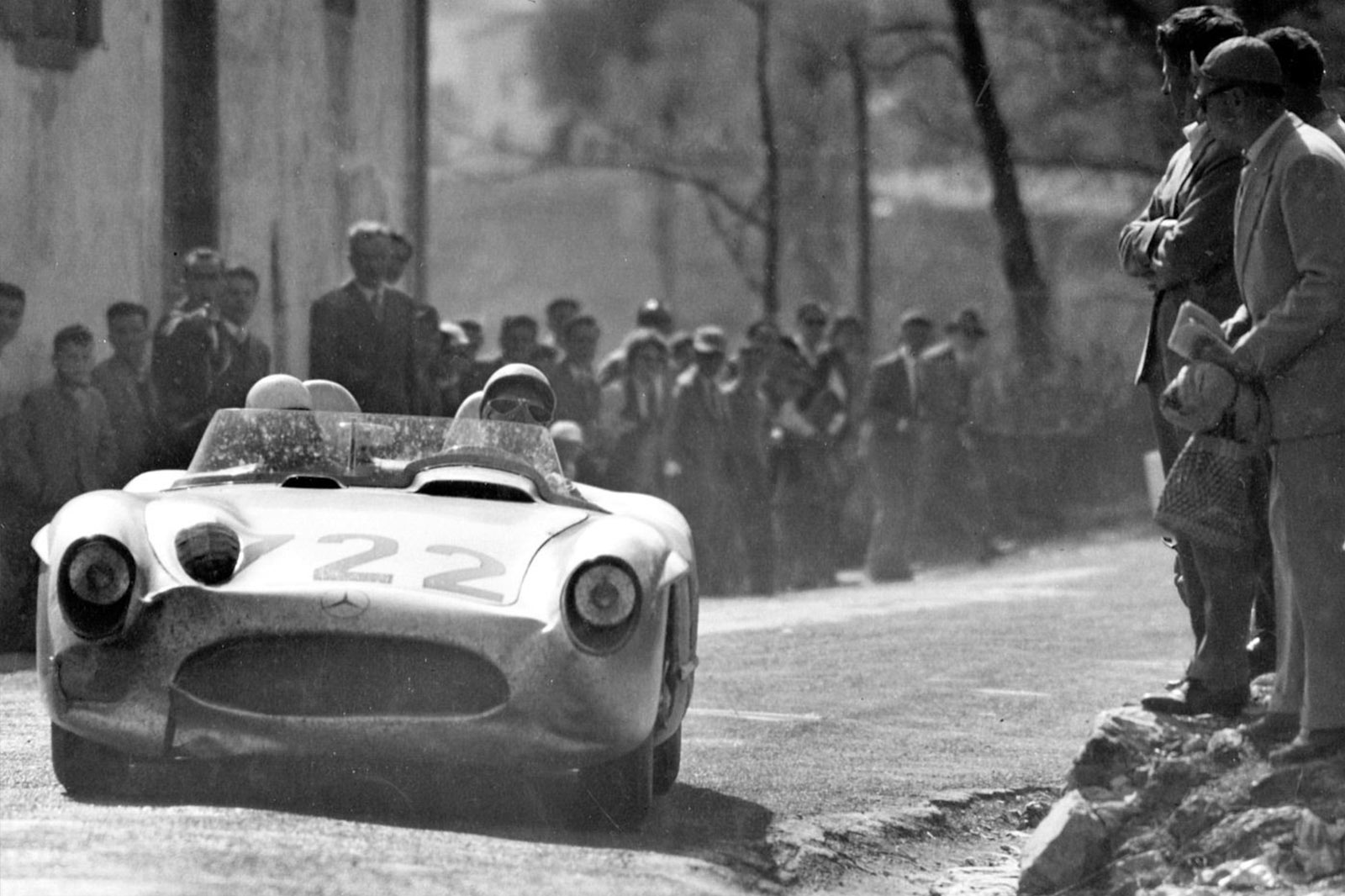 The race’s most celebrated win came in 1955, when Sir Stirling Moss set an all-time record of 10 hours, seven minutes and 48 seconds in his Mercedes-Benz 300 SLR. He covered the 1,000-mile course at an eye-watering average speed of 98mph. A superhuman feat even by today’s standards, but all the more impressive when you consider that much of the course consisted of dusty, boneshaking country tracks, with dozens, if not hundreds of spectators huddled around every corner.

The Mille Miglia may have survived World War II, but it failed to endure the negative PR that ensued following two fatal crashes in 1957. Eleven drivers and spectators lost their lives and organisers were forced to hit the brakes. 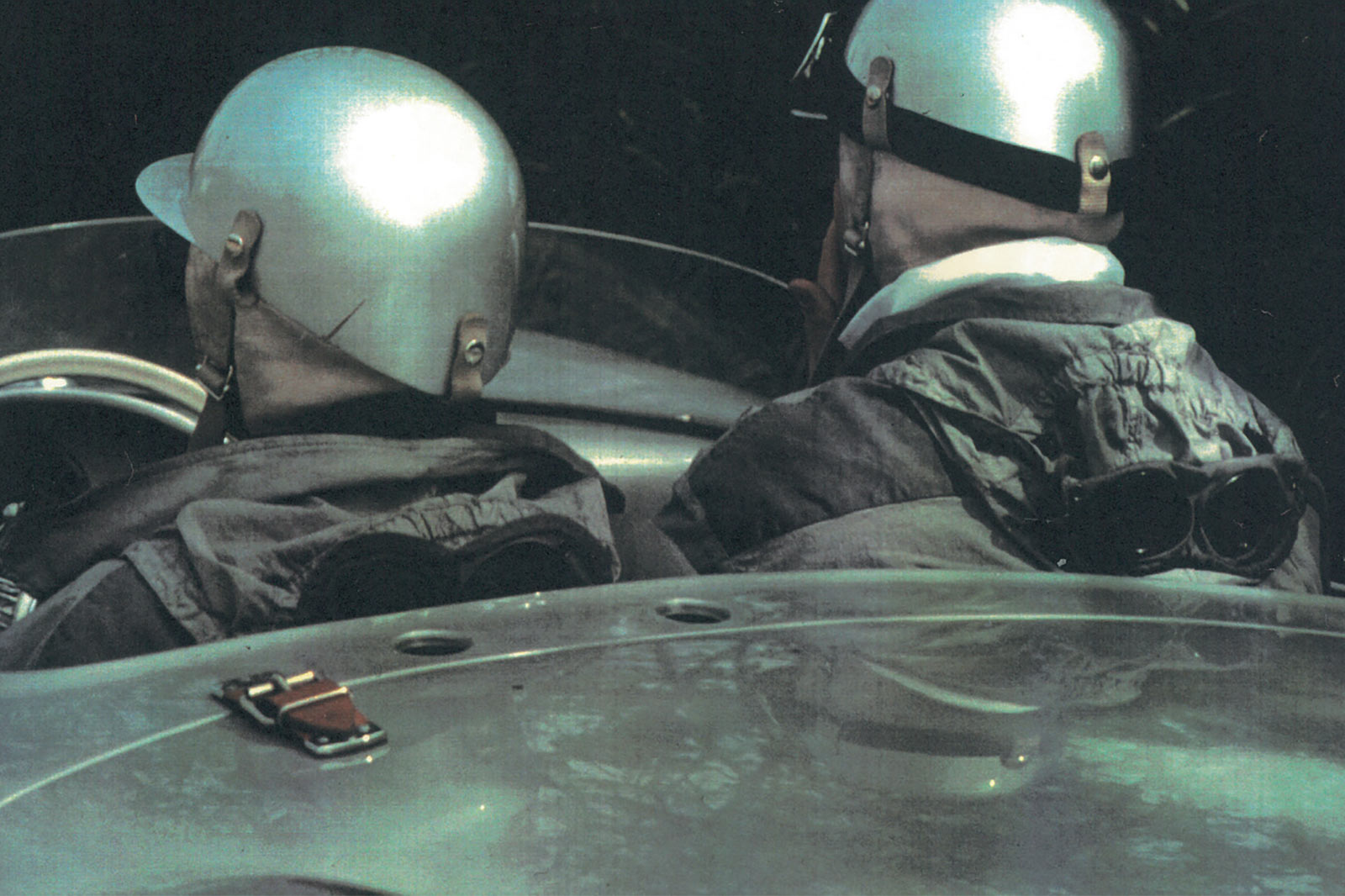 Thankfully, all was not lost. In the 1970s, around the same time that Massimo Osti was kicking C.P. Company into gear, a band of enthusiasts decided to revive the Mille Miglia as an annual re-enactment and regularity race.

The second coming took place in 1982, and five years later, the organisers struck up a sponsorship deal with what was by this point one of the most exciting new menswear labels around. 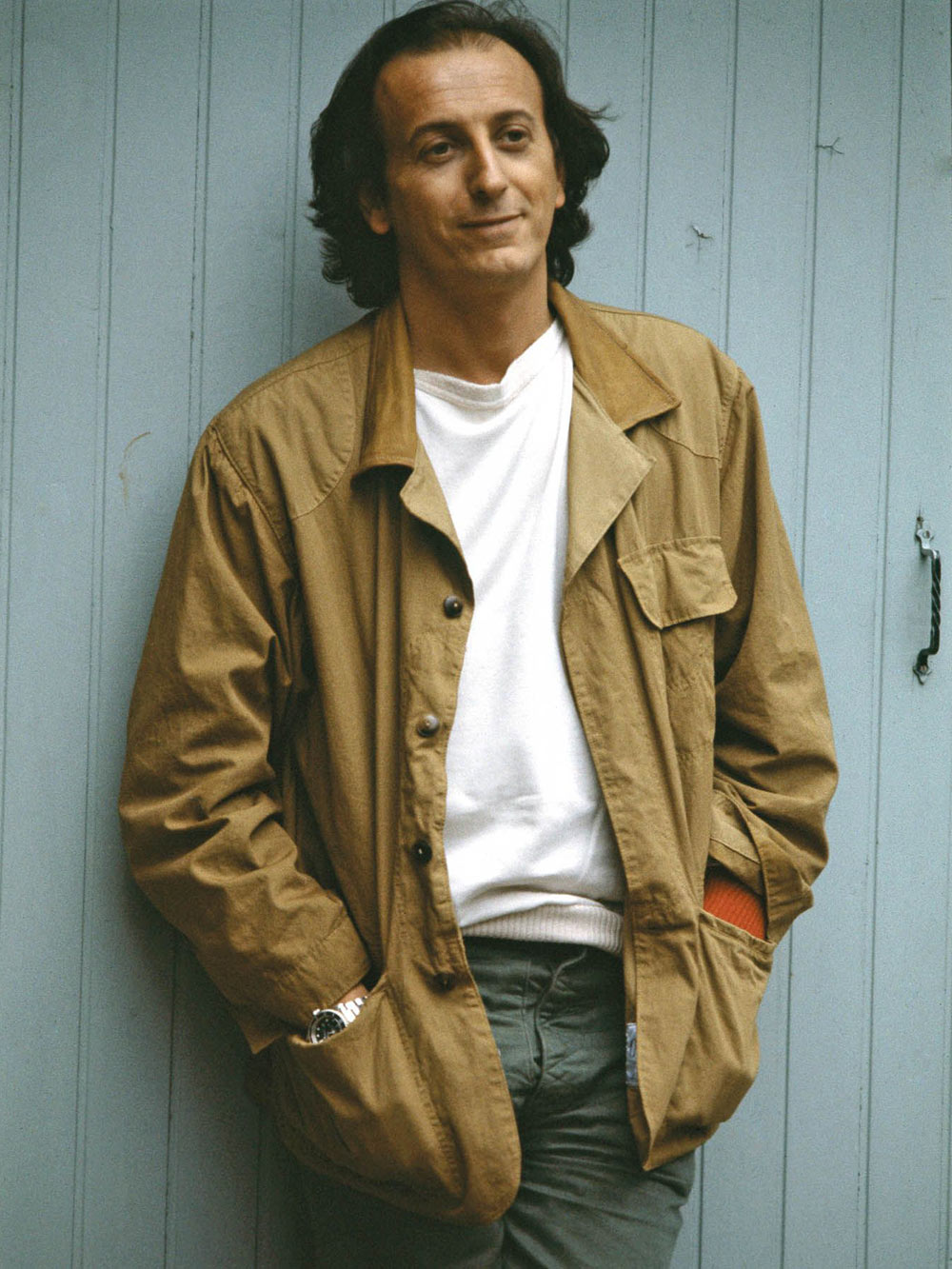 By 1987, Osti had grown C.P. Company into a full-blown cultural phenomena. Known for its innovative use of unusual fabrics and creative dyeing techniques, his work was lauded for its forward-thinking approach and apparent immunity to the ebb and flow of trends.

“His designs weren’t following fashion but setting their own path outside of that,” explains Ollie Evans, founder of London’s Too Hot Limited, a retailer-cum- creative agency that specialises in vintage C.P. Company pieces.

“Based on his interest in military and workwear, his inspiration came from purely functional garments. It’s an approach that resonated with his audience. Firstly in Italy among the Paninari, who brought his work to prominence in the early-mid ‘80s, and later in the late ‘80s/early ‘90s with the British casual subculture, who truly adopted his work as their own.” 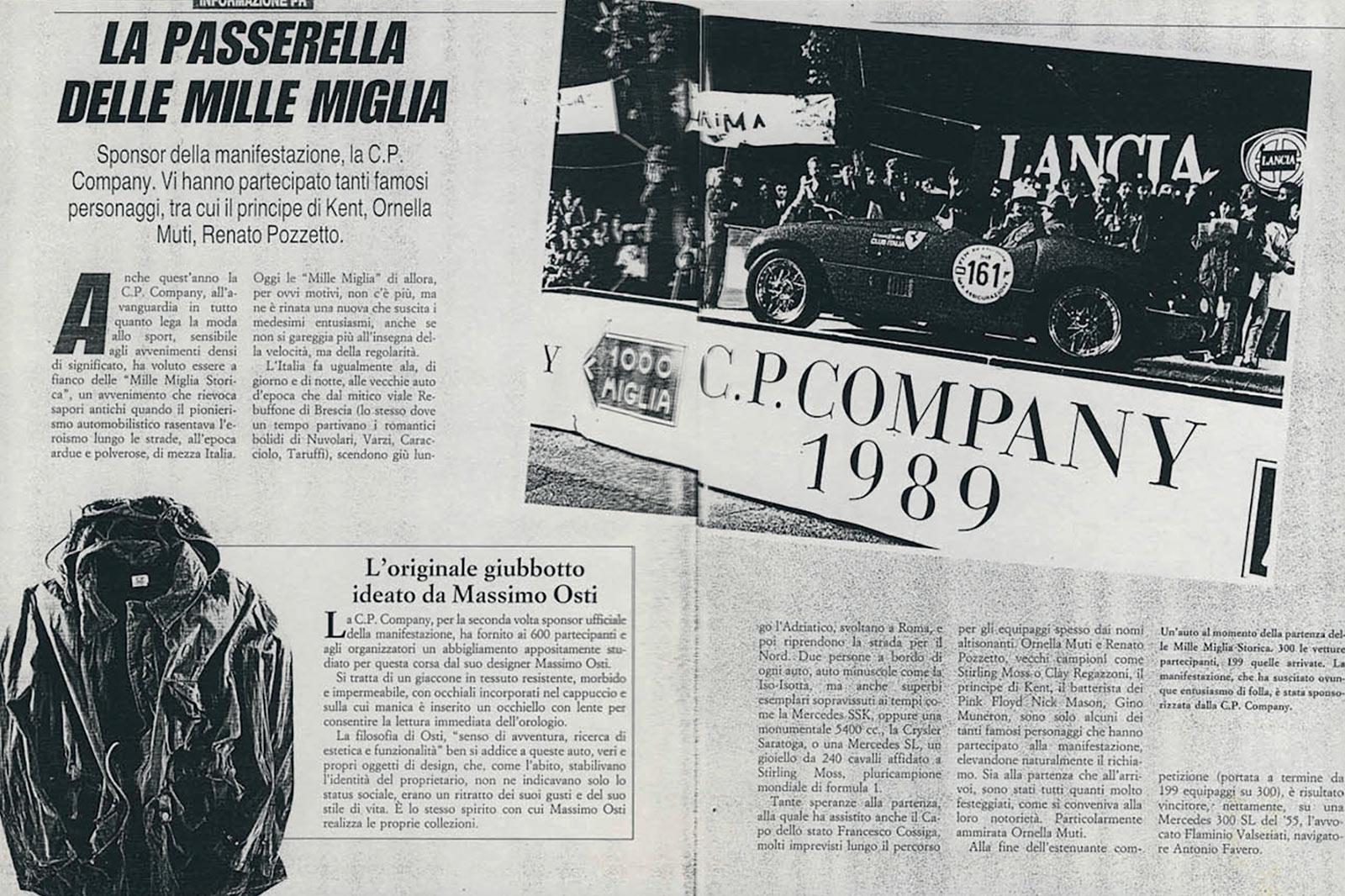 It was this obsession with function that led Osti to create the first Mille Miglia goggle jacket. He had been studying protective hoods worn by the Japanese Civil Defence and became fascinated with the idea of incorporating lenses into a jacket. Several prototypes later, he settled on placing them in the hood, where they could be flipped down over the eyes.

This unique design feature could be used to shield drivers’ eyes from rain and mud, while a watch-viewer window in the sleeve allowed them to check the time without having to take their hands off the wheel. Multiple pockets, inspired by a vintage Swiss army field jacket, could be used to store race essentials, such as maps, notes, ID cards and provisions. 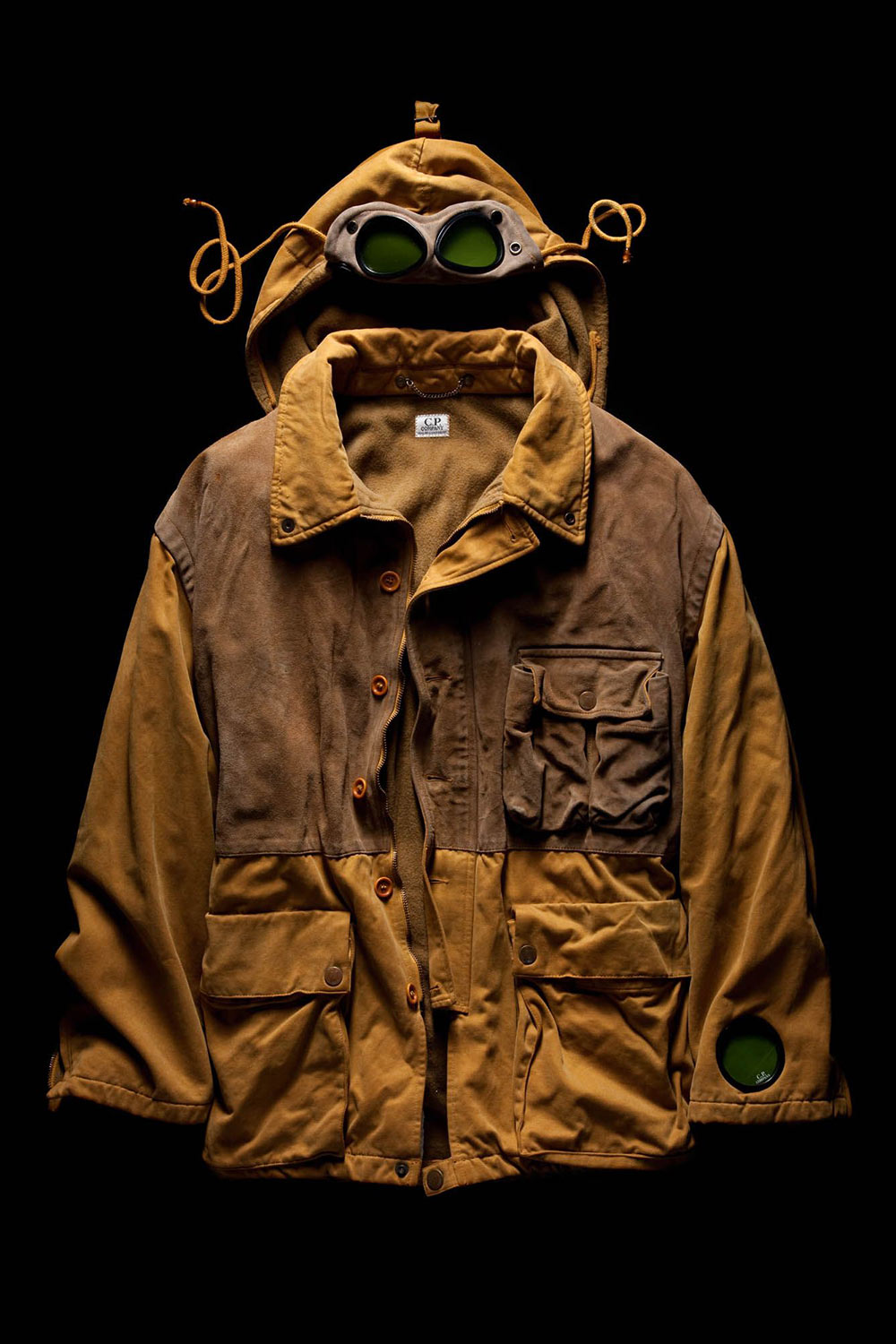 Osti had unwittingly created the perfect jacket for the 1988 Mille Miglia, and when he realised this, he had a custom batch specially made, handing them out to the race organisers and participants.

“The original race-branded jackets given to drivers of the 1988 and ‘89 Mille Miglia events are almost mythical in their revered status among collectors,” says Evans. “They were made from beige fabric and featured a red race logo stamped onto the chest-pocket flap.”

It’s from these first jackets that the Mille Miglia took its name. New variations have been released yearly ever since, and while small details change, the core design remains the same: multiple pockets, goggle hood, watch viewer.

“The Mille Miglia goggle jacket has become a true icon due to its sheer originality,” says Evans. “It is a garment steeped in history and context, and the goggle hood is more popular now, 34 years later, than it has ever been. It’s on magazine covers, in music videos, fashion editorials, on the terraces and on the street. It’s instantly recognisable and there is nothing else out there quite like it.”