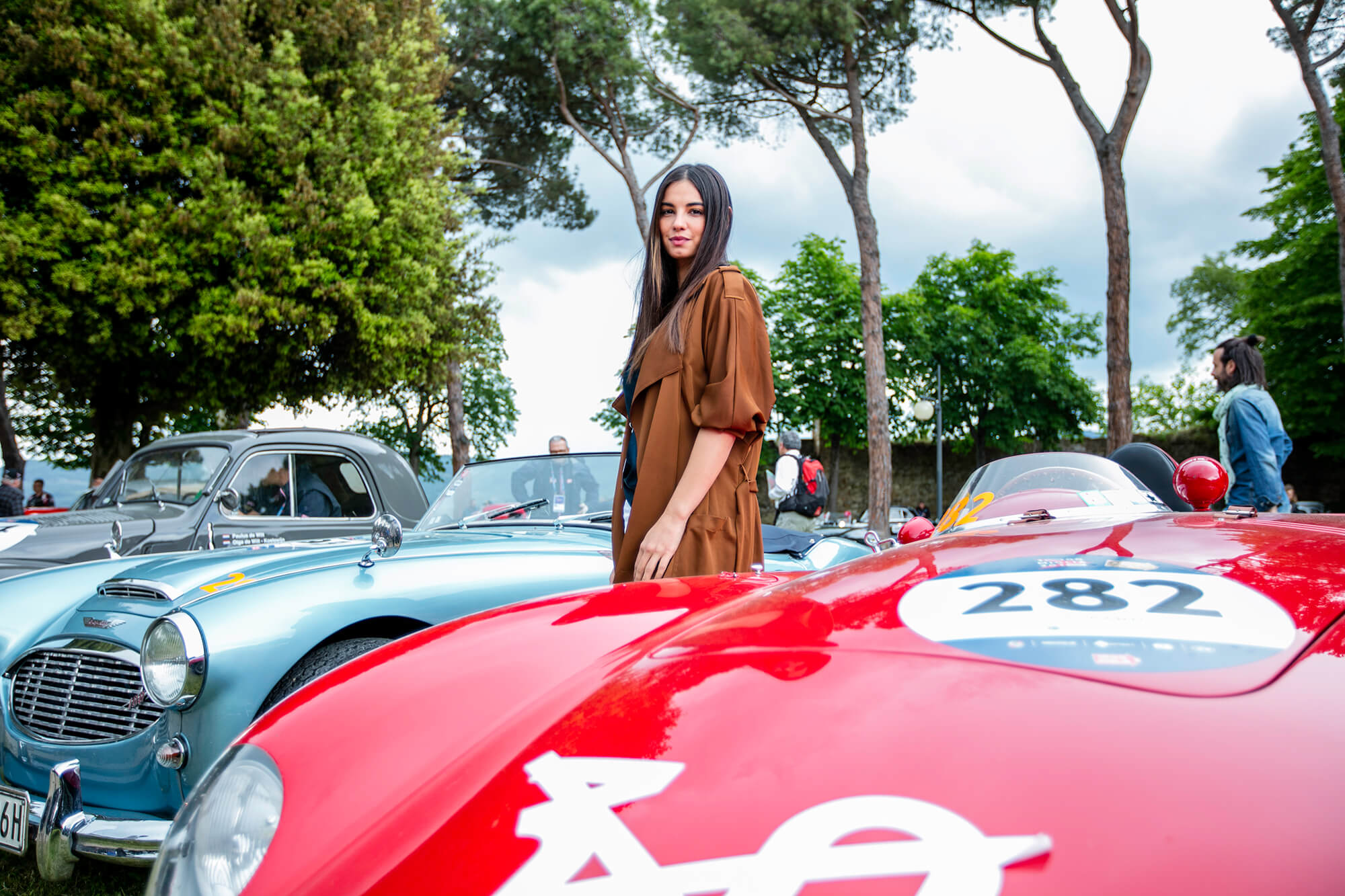 There’s a series of Johnnie Walker adverts called The Gentleman’s Wager. You know: the ones where Jude Law and Giancarlo Giannini take on a series of bets to win various über-luxury prizes. The second in the series sees Jude hustle his way to winning Giancarlo’s entire Italian estate, including a huge Renaissance villa and what must be grounds half the size of Florence.

He does this by fixing and racing a gorgeous Delahaye 135 from the south of Italy to Monaco “by noon tomorrow”, however long that means. Cue mechanical montage, oil in face, a chat about carburettors, a rakish necktie/boilersuit combo, wheel close-ups, Jude helping a damsel in distress, said damsel helping him reach the finish line before noon, and Jude enjoying his new multi-million pound property.

“Outrageous!” you scream. “Outlandish!” you protest. “It can’t be done!” you labour. If that’s the case, maybe the Mille Miglia isn’t for you.

The Mille Miglia – “thousand miles” – is, for all intents and purposes, Wacky Races with added glamour. The race was established by two young Counts, Aymo Maggi and Franco Mazzotti, in a rallying cry against the Italian Grand Prix being moved from their home town of Brescia. They, and other various wealthy young Italians, devised a figure-of-eight course that went from Brescia to Rome and back, taking in approximately 1,000 Roman miles – because why use a modern standard of measurement? 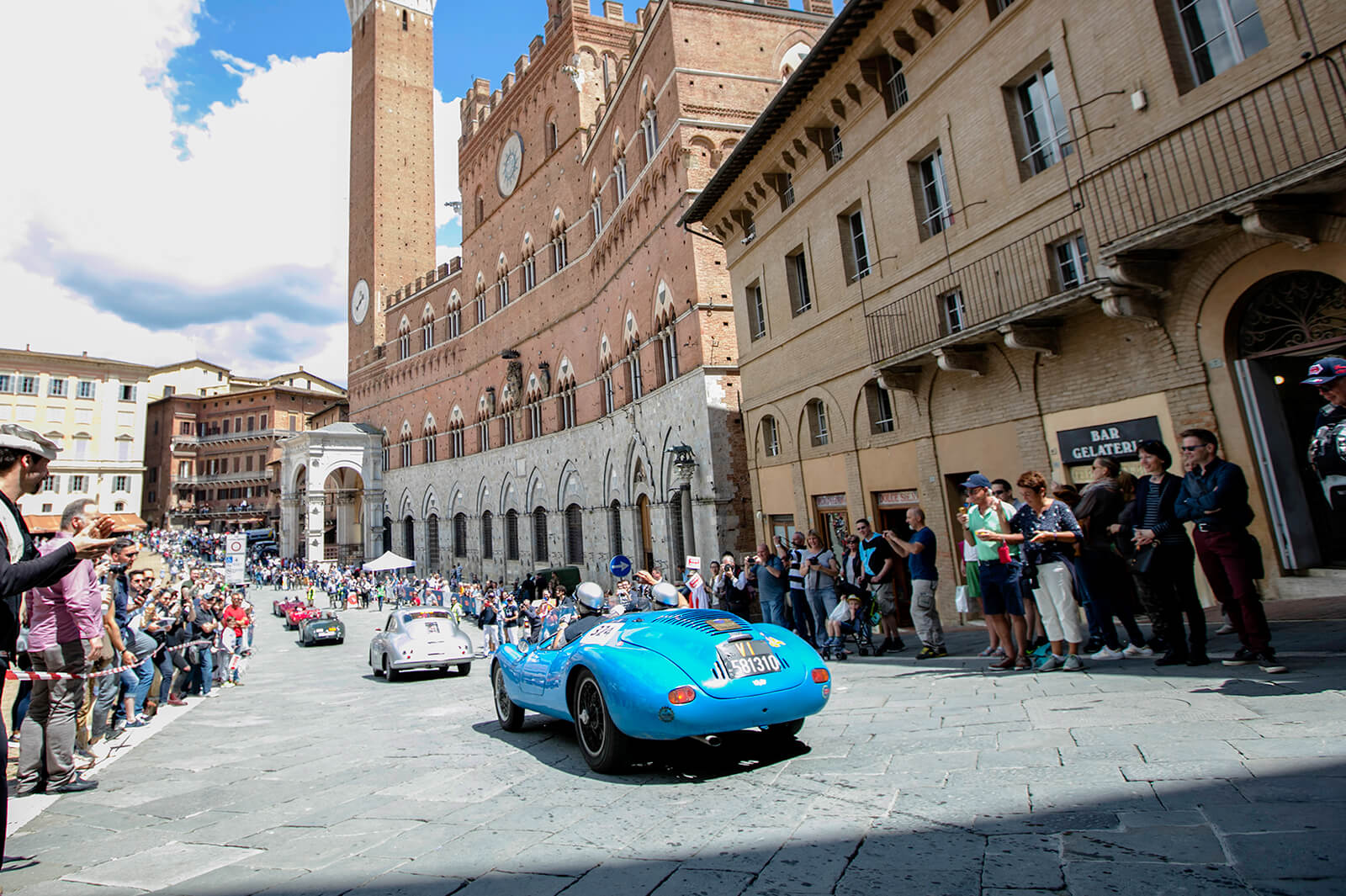 The first race, starting on 21 March 1927 and costing a single lira to enter, had 77 starters – all unmodified production cars – and 51 of these finished the race. The winner, Giuseppe Morandi, finished in just over 21 hours. In the next 23 editions (with two pauses due to a fatal accident the previous year and the substantially more fatal Second World War) Italian drivers won all but three.

The most famous foreign win was in 1955, with Sir Stirling Moss and racing journalist Denis “Jenks” Jenkinson taking the title in what fellow journo Doug Nye called the “most iconic single day’s drive rally in motor racing history”. Moss and Jenks went on six reconnaissance laps, negating any local advantage and leaving Moss to use his superior skills to win in 10 hours, seven minutes and 48 seconds. Before the race, fellow Grand Prix competitor Juan Manuel Fangio gave Moss a “magic pill”, apparently full of dexedrine and benzedrine, to keep him awake and alert. It worked: after the race, Moss immediately drove off with his girlfriend, travelling through the night and next day to Cologne and stopping off for breakfast and lunch in Munich and Stuttgart. Magic pill indeed. 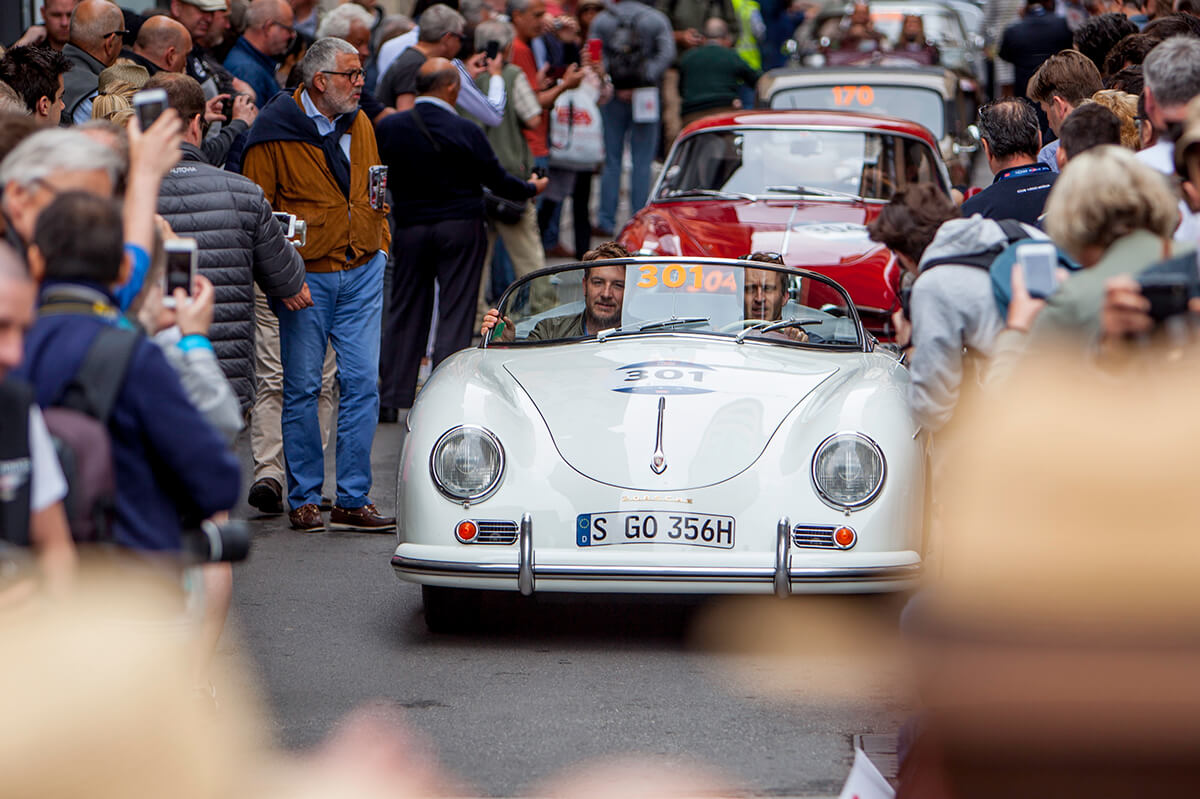 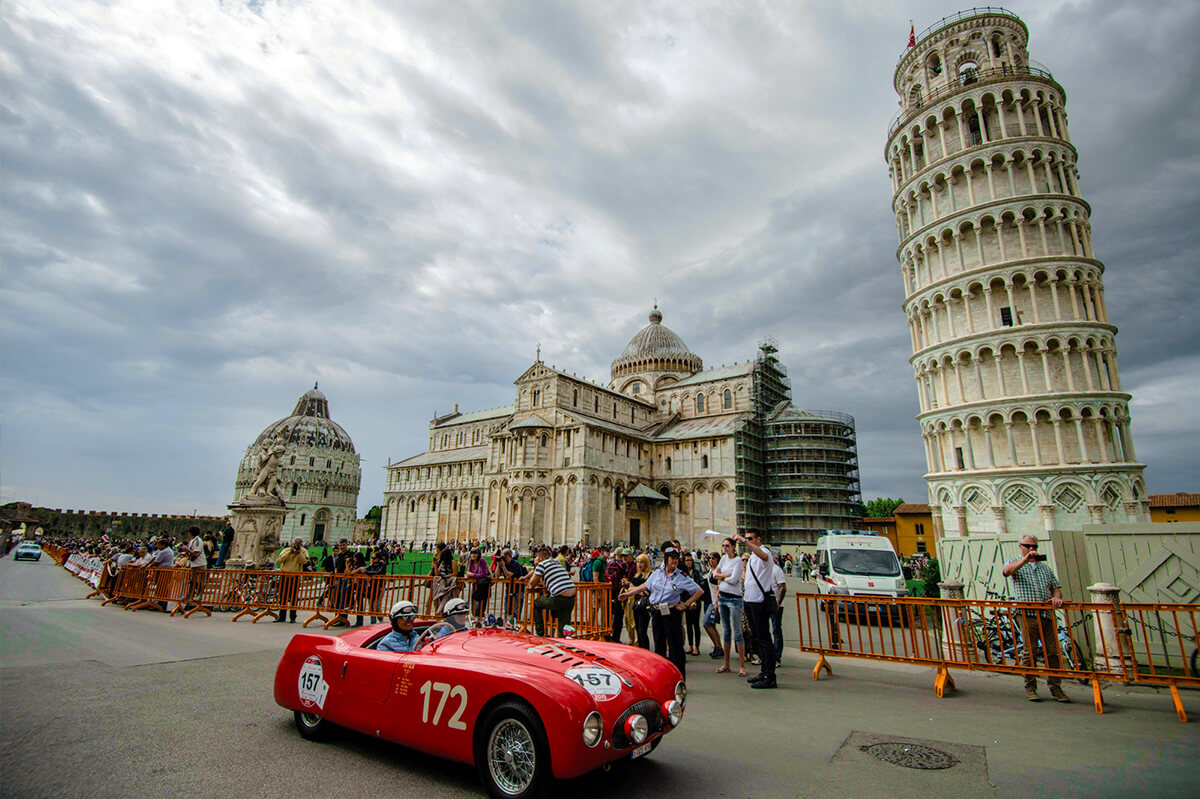 The race was discontinued just two years later after two fatal crashes. Not that it had the best safety record anyway; from 1927 to 1957, the race took the lives of 56 people. However, in 1977, the race was revived as the Mille Miglia Storica, a road rally event held over multiple days. This year’s race is the 37th re-enactment, with 430 teams from five continents driving cars of various ages and classes over four days. The only rule for entering is that the model was registered for at least one of the original races. Among that happy number this year are 39 Alfa Romeos, 36 Jaguars, 31 Fiats and 29 cars from both Lancia and Mercedes-Benz. It’s a veritable who’s who of glamour rallying.

As is tradition, the race starts in Brescia, taking in towns such as Rome, Siena, Florence and Bologna. Part rally recreation and part celebratory parade, the route meanders through hilltop villages, coastal towns and major centres, giving spectators a chance to see the unique set of vehicles. There are even five cars belonging to a separate Military category, driven by members of the Italian armed forces. 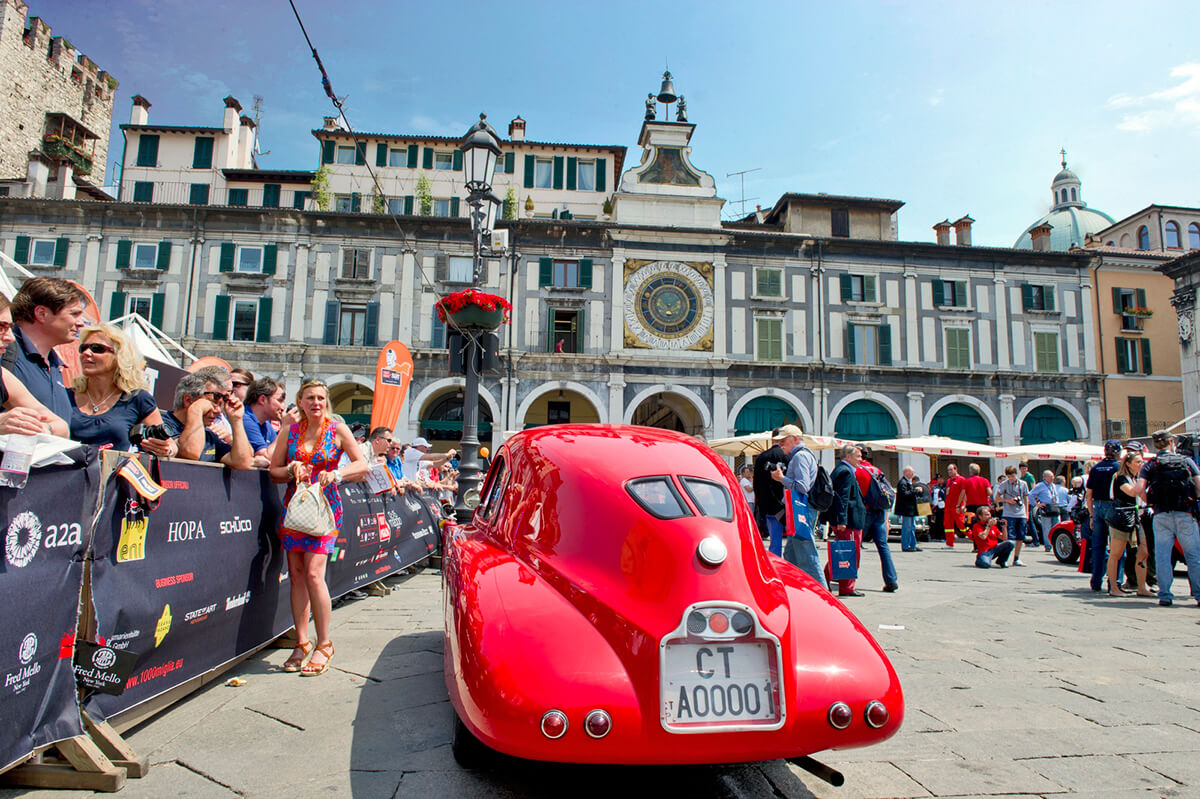 Anyone can register for the race, seen by many as the most beautiful in the world. After Holy Mass in Brescia’s Duomo Vecchio, and a blessing of the cars, the first day of the race this year will see the convoy of enthusiasts, professionals, engineers, military, collectors and anyone else wanting to join the revelry pass through Valeggio sul Mincio (and the Sigurtà Garden Park), Ferrara, Comacchio and Ravenna. Finally, they’ll arrive on Italy’s east coast at Cervia Milano Marittima in the evening.

At dawn the next day, the journey to Rome begins, via towns such as Gambettola, Urbino, Assisi, Perugia and Rieti, arriving in the capital at dusk. Day three sees the start of the return leg, past Lake Vico, lunching at Siena’s stunning Palazzo Pubblico, driving through Vinci and Florence, and crossing the historic Futa and Raticosa Passes before ending in Bologna, in the centre of Emilia, Italy’s motoring heartland. 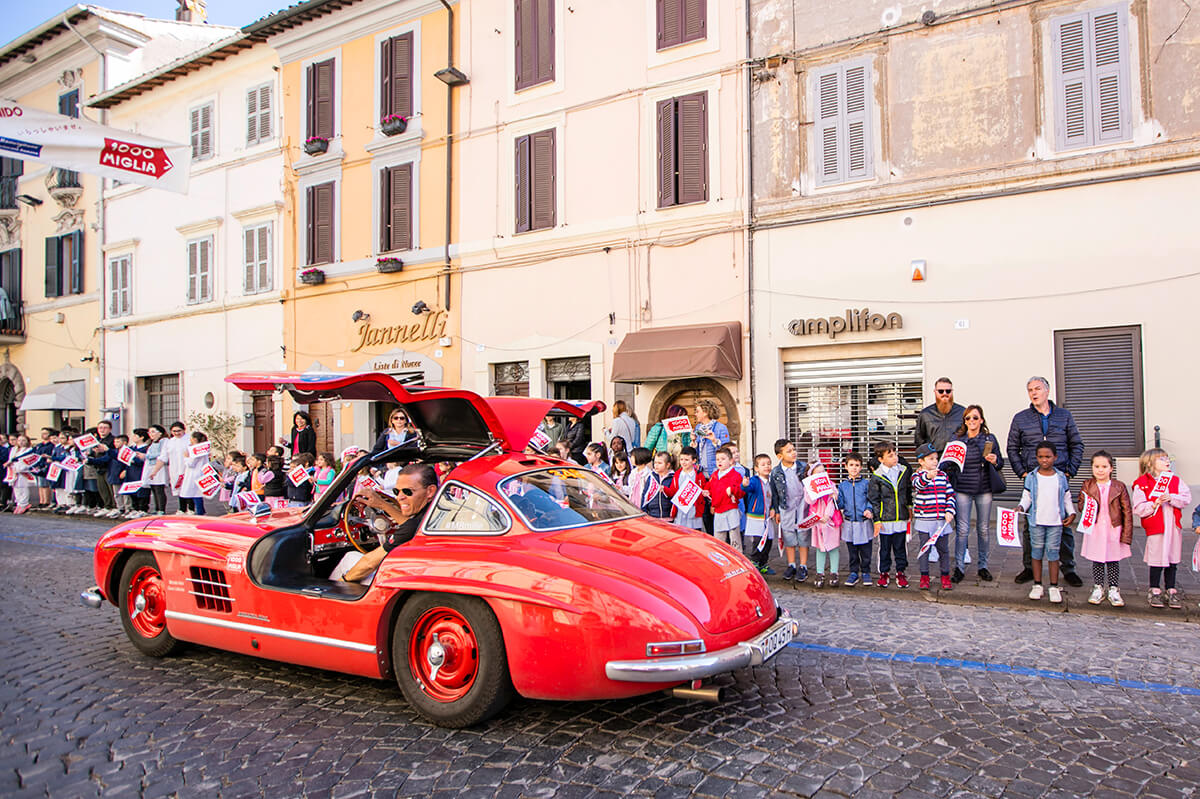 The final day is when the real pageantry begins, with the convoy taking in Modena, Reggio Emilia, Parma and Montichiari on its return to Brescia for the traditional parade on the glamorous Viale Venezia. Assuming your car makes it back, the final evening is the time to celebrate the history of Italy’s most famous rally, with an awards ceremony and afterparty. Just don’t even think about driving the next day.

There’s a heavy sense of history throughout the race, a feel of a travelling motoring museum celebrating the best the rally world has ever produced. In the face of four days of driving, fixing and showing off, an impressive 98 of the cars entered this year actually raced in the original Mille Miglia series. Who knows: Jude Law’s new prized Delahaye might make an appearance. Mr Giannini needs to win it back somehow.

The C.P. Company goggle jacket is a staple of men’s outwear fashion and its history is inextricably...