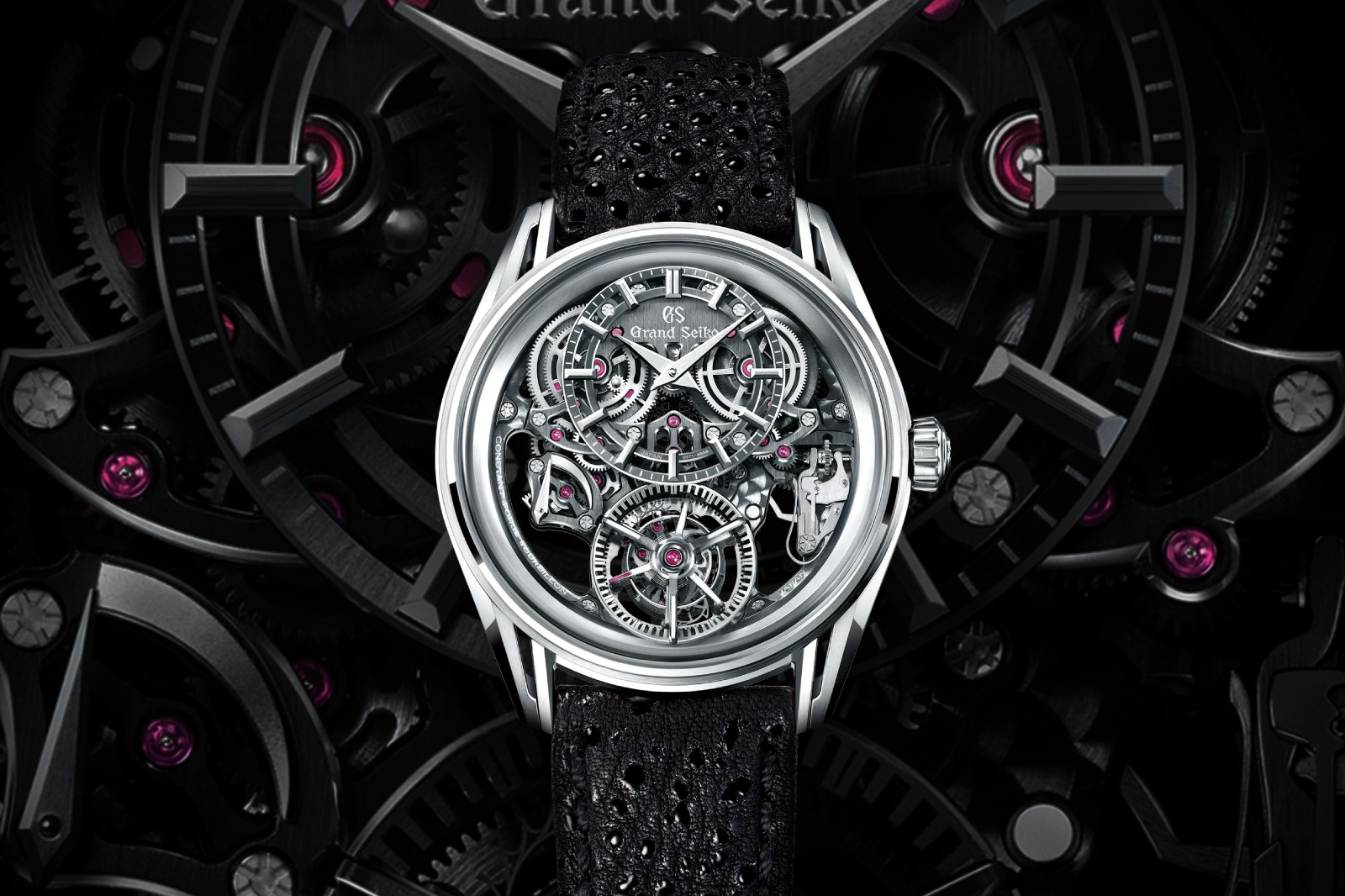 Grand Seiko has always had its own brand of haute horology. They’re more apt to lavish attention on their dials and finishing than to delve into the realms of complex mechanical complications. However, the first inkling that change was on the way came in 2020 with the concept movement T0 Constant-Force Tourbillon, their first ever calibre to feature a constant-force tourbillon mechanism. Two years and further experimentation later, Grand Seiko’s first wristwatch version is ready in the form of the limited edition Kodo Constant-Force Tourbillon.

A valid question to get us started is, what is a constant-force tourbillon? Well, it’s a mechanism that is designed to keep a watch’s accuracy as high as possible for as long as possible. In a regular movement the accuracy (how many seconds the watch gains or loses per day) is determined by the balance spring, which is kept tensioned and functioning by the power from the mainspring. However, as is the nature of a spring the mainspring pushes out more energy at the beginning than the end, so the amount of tension on the balance spring decreases over time, meaning that there’s a higher chance for deviation as the power in the mainspring gets lower. 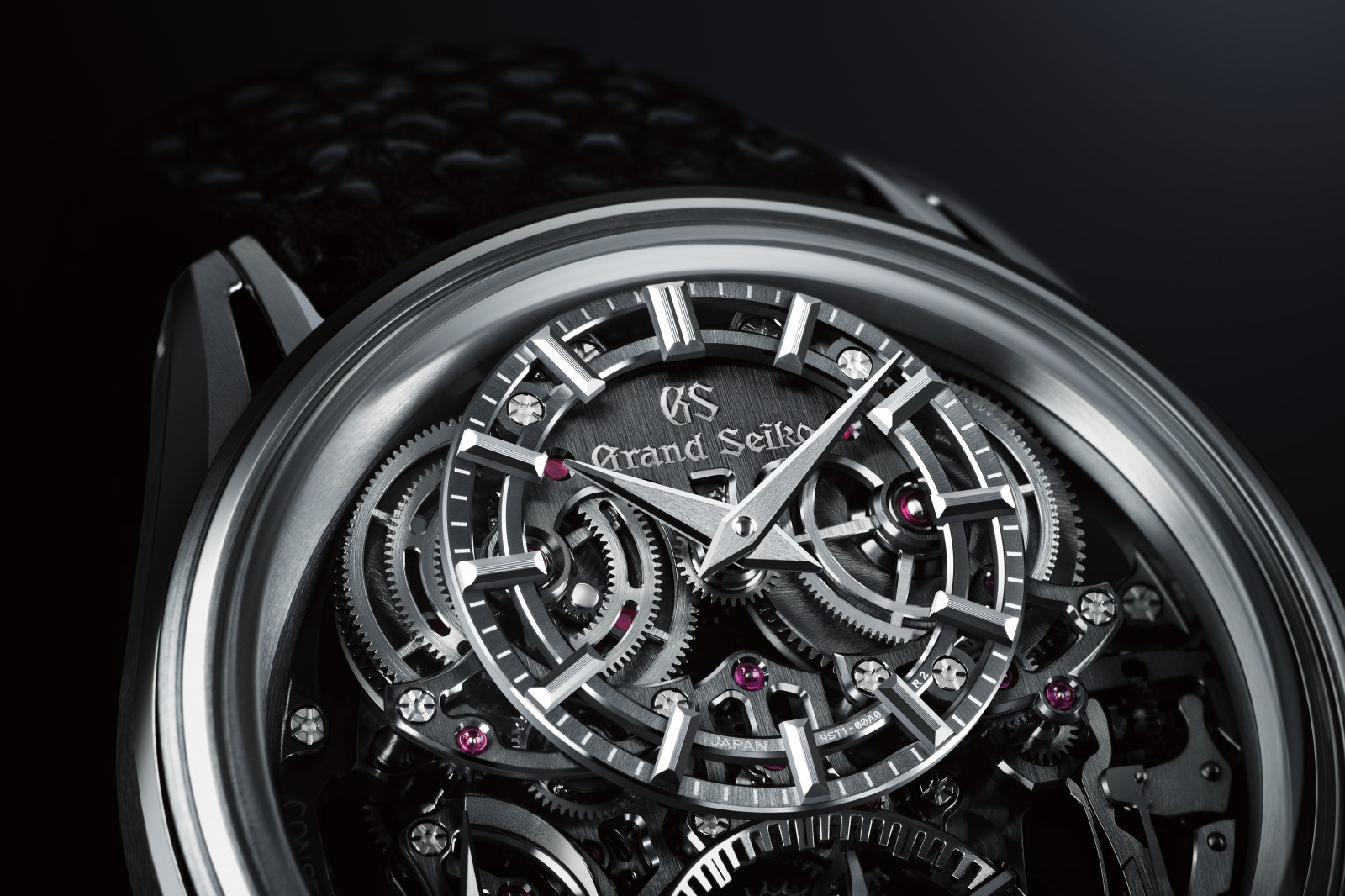 Constant-Force mechanisms counteract this. One method is by a Fusee and Chain, which evens out the balance spring torque even as the power reserve begins to deplete. However, the Kodo uses a different method called a Remontoire that serves as a second power source providing energy directly to the escapement. Hence, it allows the movement to be accurate for longer. It makes sense to combine it with a tourbillon because the theory is that they provide higher levels of accuracy. Together, a tourbillon and a Remontoire provide more accuracy for longer. 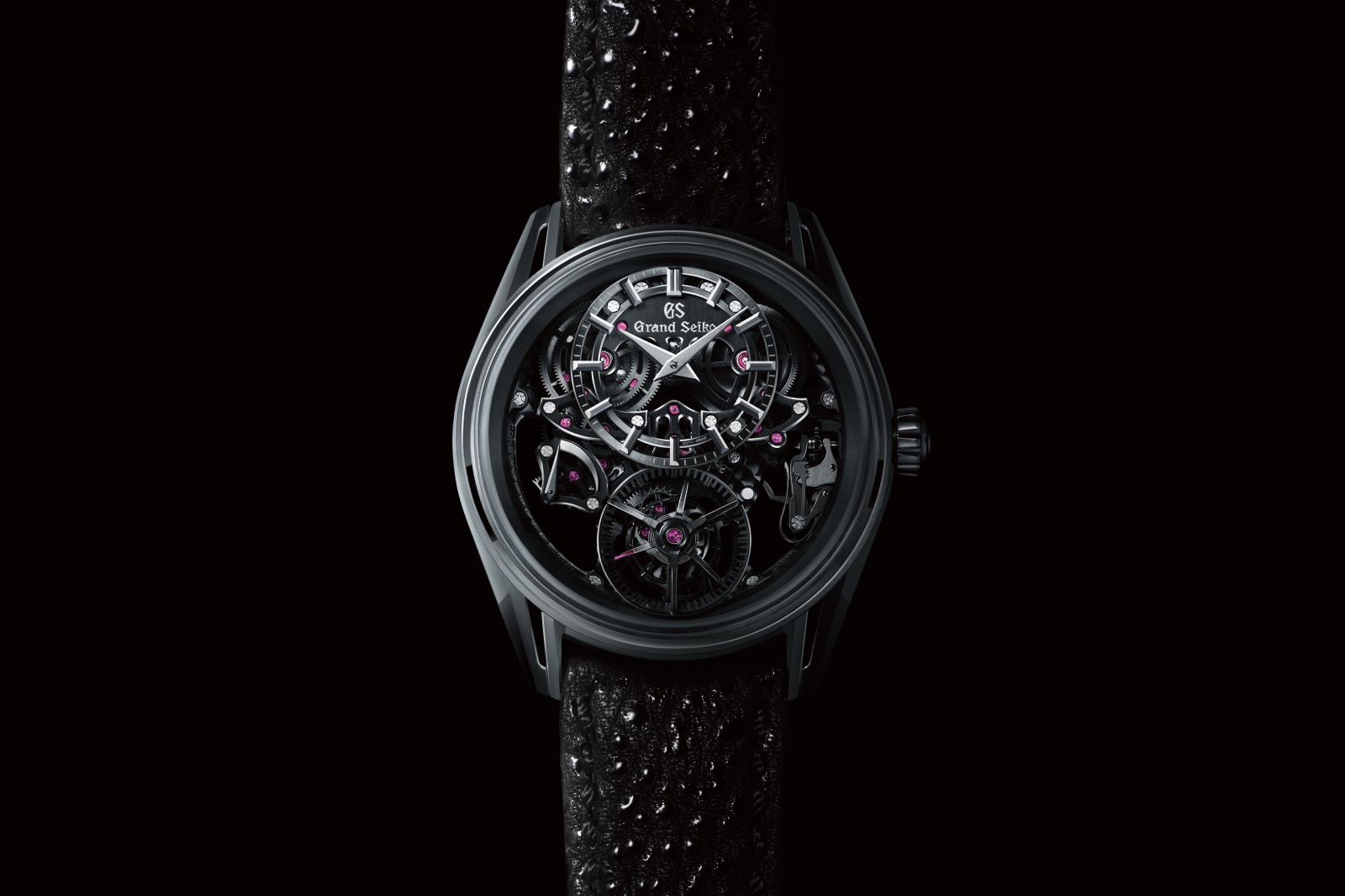 Typically, the constant-force mechanism and the tourbillon are separate elements within the movement, but what Grand Seiko have done to revolutionise them is integrate them together on a single axis, freeing up space within the movement. And because the Kodo is skeletonised you can see them both as a single unit at 6 o’clock. The tourbillon cage sits below the remontoire, both rotating once every 60-seconds with the constant-force cage following the tourbillon at 1-second intervals.

However, an important thing to note is that while the constant-force tourbillon used here debuted on the T0 concept movement, the calibre used in the Kodo is a new one. It’s called the 9ST1 and it’s smaller than the concept, making it more wearable. Despite that the total diameter of the watch is still 43.8mm, so it’s a large watch. The 9ST1 has a 72-hour power reserve and an accuracy of +5/-3 seconds per day, which is ensured by the constant-force mechanism for 50-hours once the reserve starts dropping. 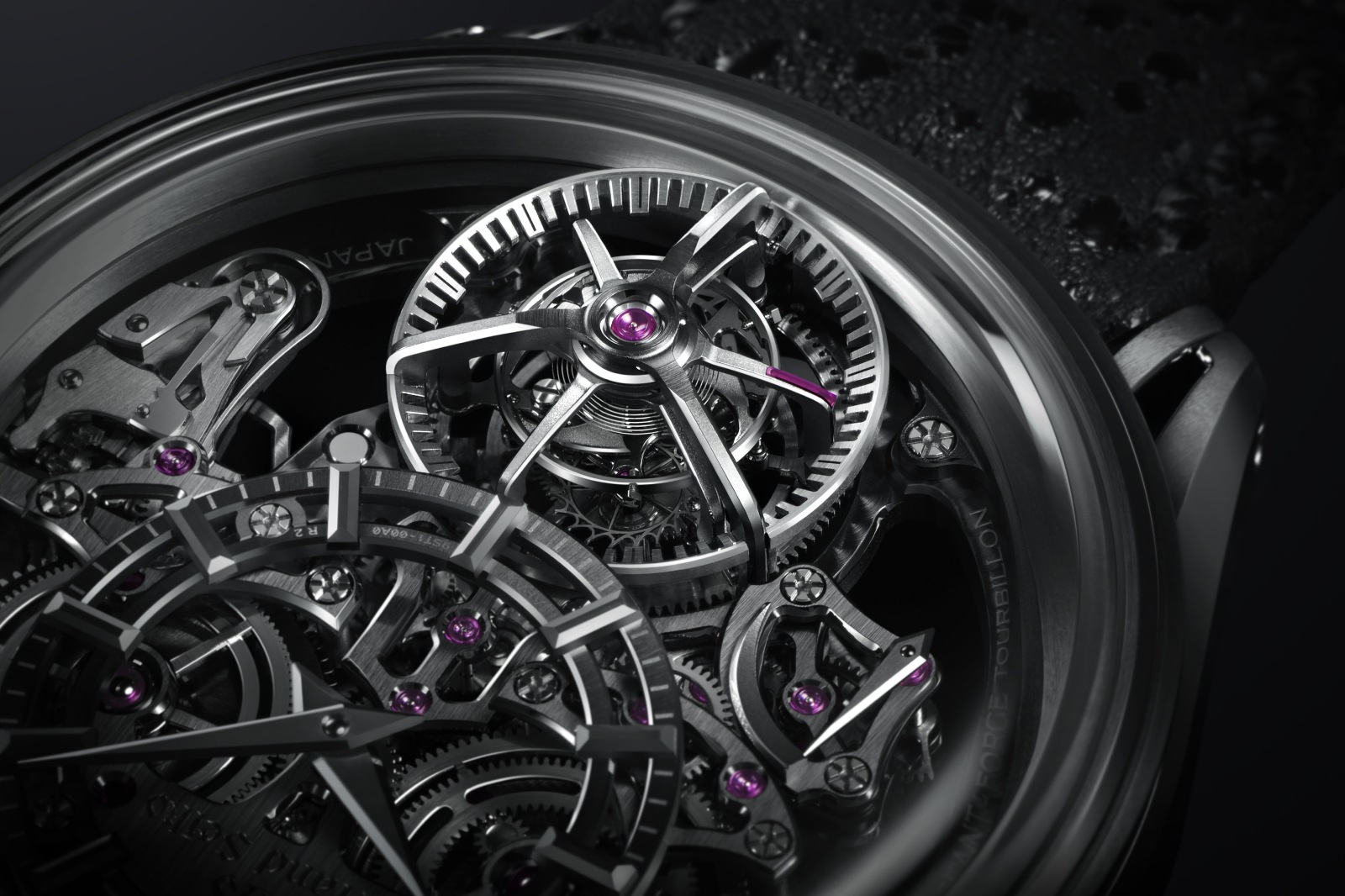 The calibre is housed with a case made from platinum and Grand Seiko’s Brilliant Hard Titanium, providing both beauty and durability. Both metals have been hand finished with a mix of Zaratsu polishing and hairline brushing with the intent that you can’t tell where one metal starts and the other ends. The only place where it’s obvious is the lugs, which are made from two distinct parts. one in each metal, separated by a hole in the middle. 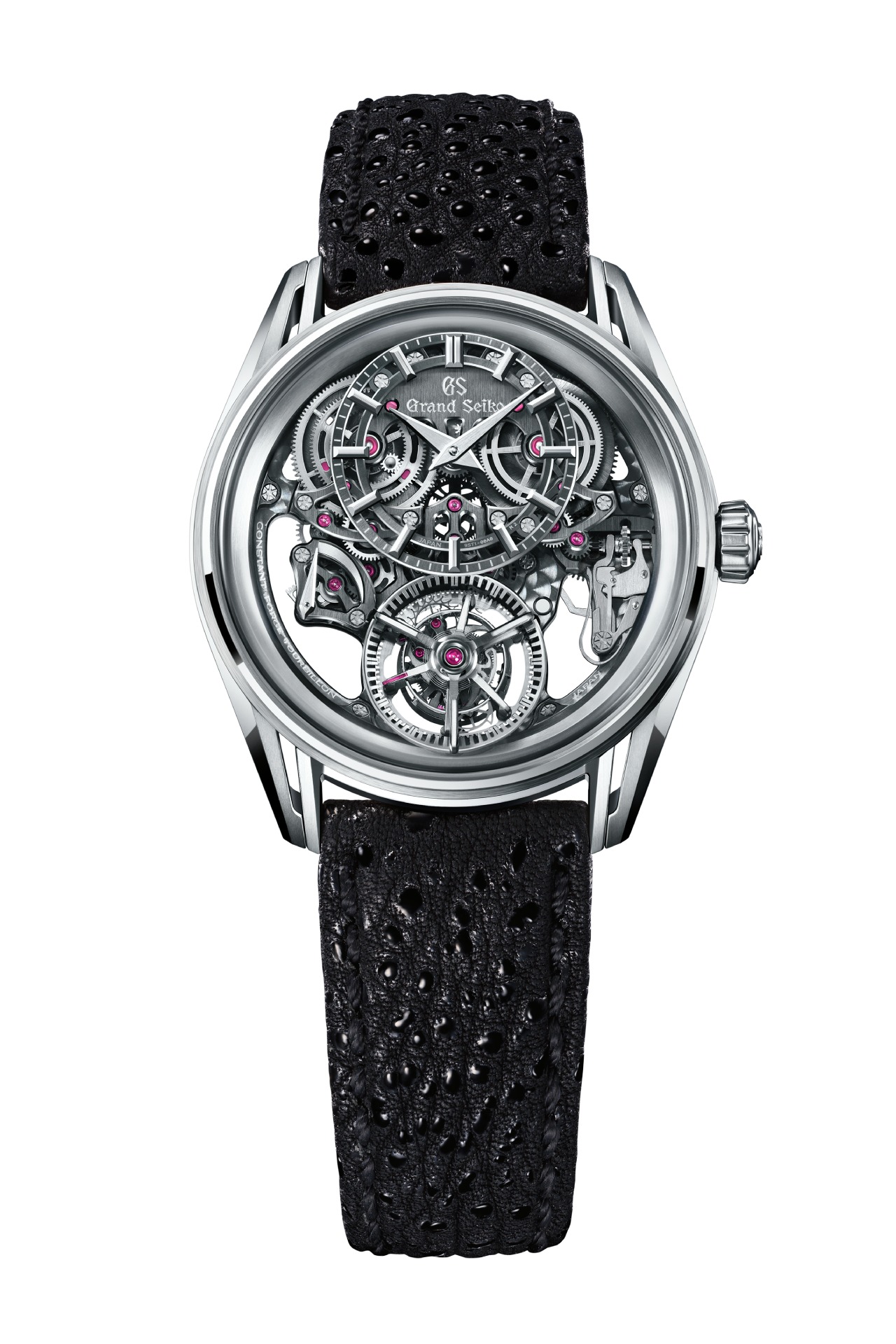 As for telling the time with this watch, there’s an hour and minute skeleton dial offset toward the top of the piece and there’s a jewel on one arm of the Remontoire cage that allows it to function as a small seconds. It’s actually one of the most legible skeleton watches I’ve seen in a while as they haven’t fallen into the trap of skeletonising the hands as well, they are solid and thick making them easy to read. The same is true of the bar index hour markers. 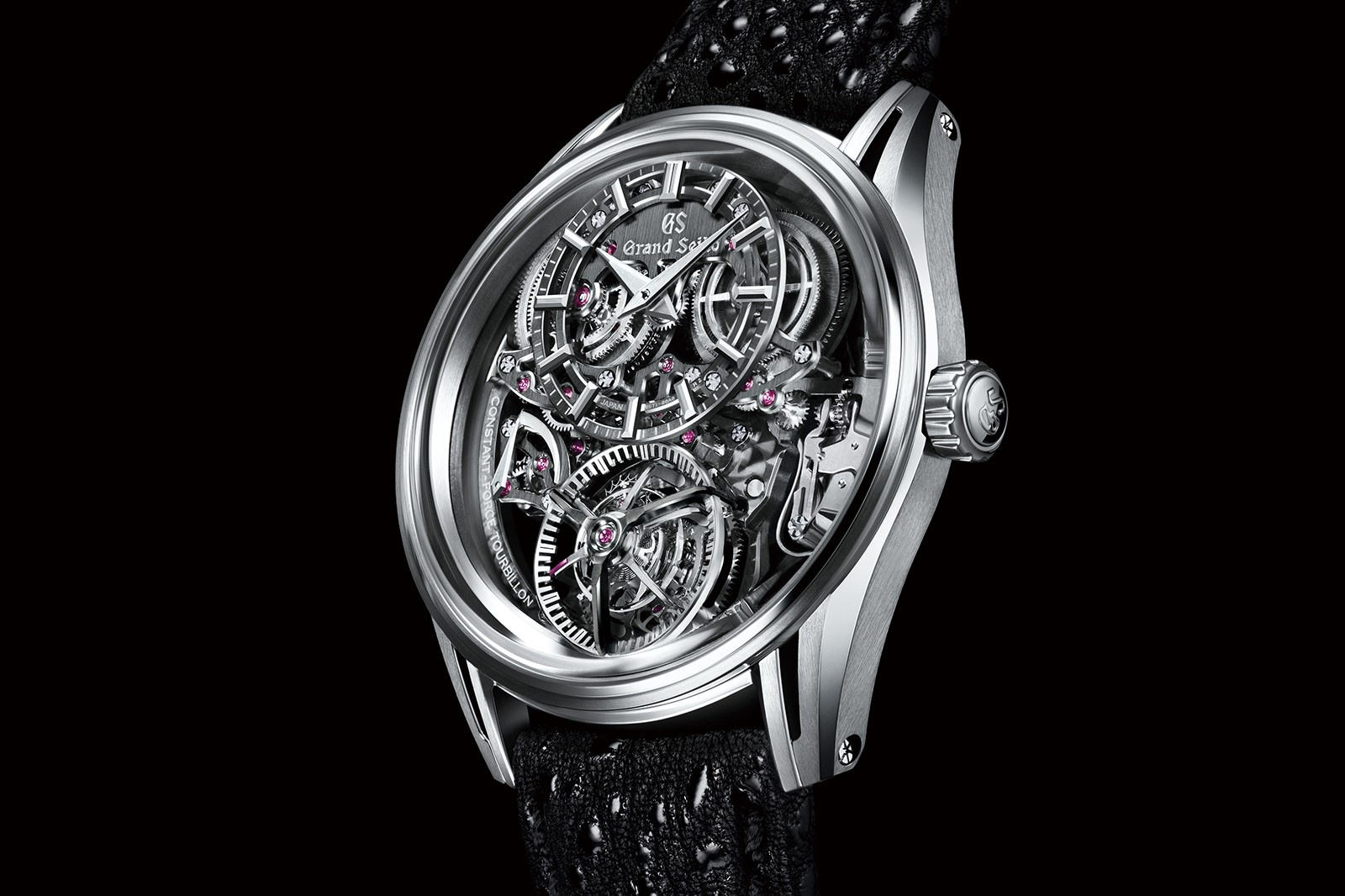 This is truly a landmark watch for Grand Seiko for many reasons and it’s been executed with their usual style and attention to detail. Even the strap is amazing, having been treated in the same way as historic samurai armour. I’m a stalwart fan of their textured dials and they’ve proven that their watches are just as good without any dial at all. The Grand Seiko Kodo Constant-Force Tourbillon is limited to just 20 pieces at a price of £310,000, which is certainly a substantial number albeit an understandable one.

Alongside the launch of the Kodo, Grand Seiko have also announced the opening of a brand new watchmaking studio. Atelier Ginza is located in Tokyo in the historic Ginza district where Kintaro Hattori founded Seiko in 1881. Last year Seiko celebrated this piece of heritage with their Prospex and Presage Ginza editions and now Grand Seiko are honouring it as well. Atelier Ginza is dedicated to creating “unique” watches, likely meaning it’s the heart of any future mechanical haute horological timepiece development.