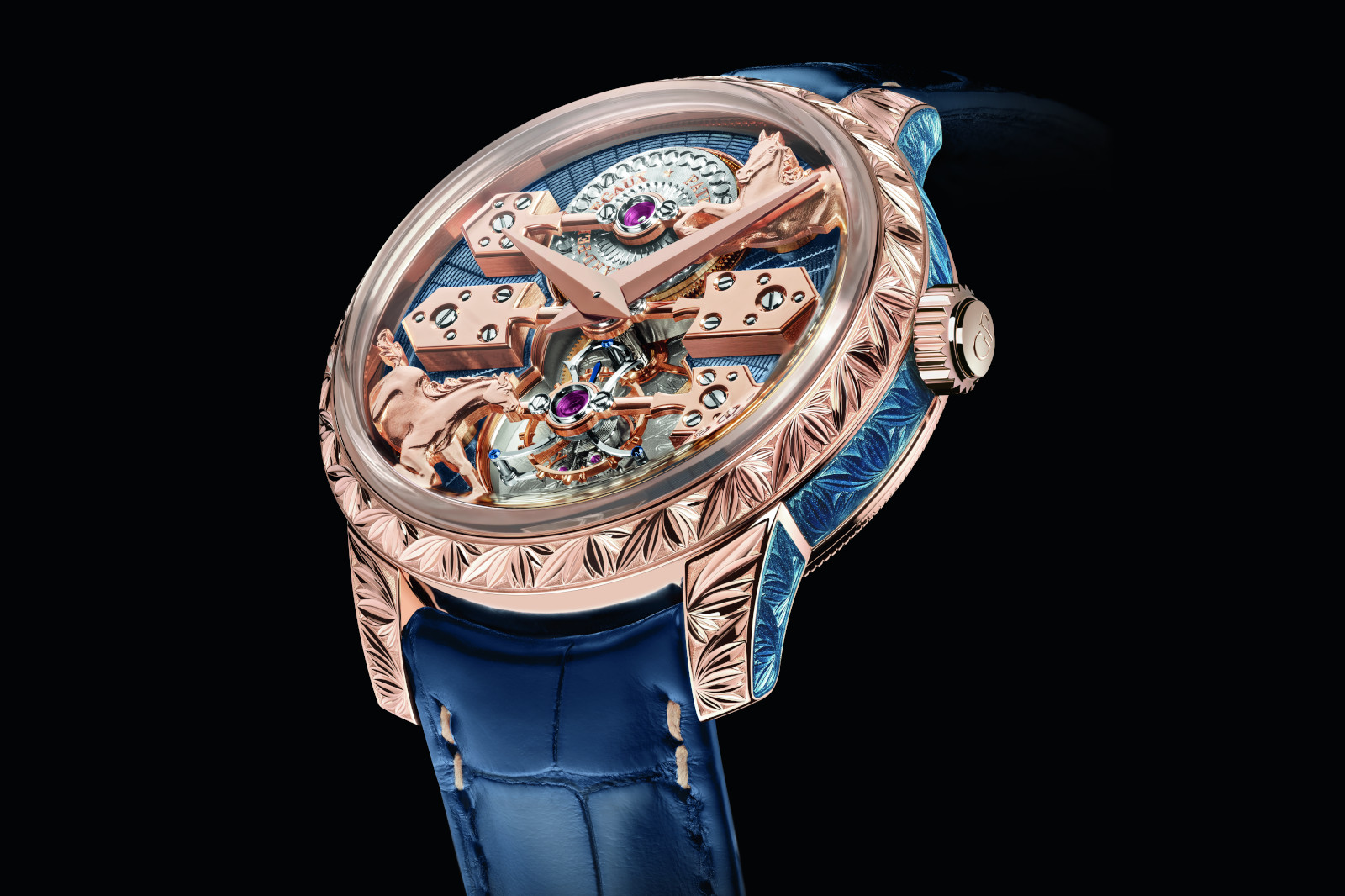 These days Girard-Perregaux are more synonymous with golden bridges than Vietnam, but even then the iconic design that the manufacture’s come to rely on in their highest end pieces dates back further than you might think. The original design in pocket watch form came about in 1860, though the trio of bridges then were nickel silver rather than gold.

The design that upped the ante came a few years later with La Esmeralda in 1889, another elaborate pocket watch, beautifully engraved and eventually bought by the president of Mexico. Fast forward to today and that pocket watch is also the inspiration behind the new La Esmeralda Tourbillon “A Secret” Eternity Edition. 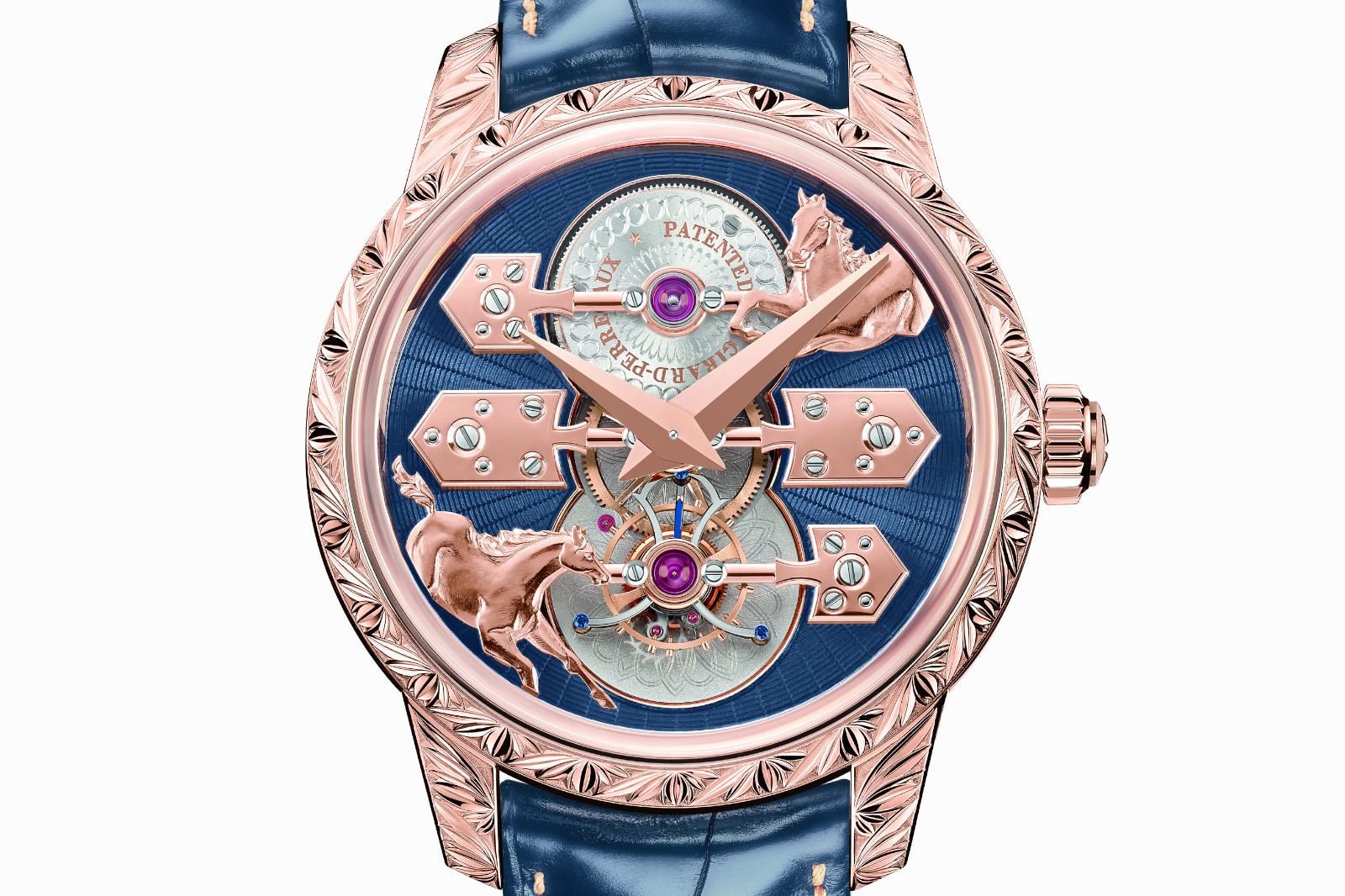 It’s a hell of a name but then this is one hell of a watch, one of the only pieces where three golden bridges straddling the centre of the watch are just the starting point. Those bridges are finished to excess, with mirror polishing and traits-tirés – long drawn lines – aplenty. They also feature something you likely won’t have heard of before: concave bevelling.

Bevelled edges are a staple of haute horology finishing, the soft, rounded edges, usually on bridges, that catch the light and add incredible depth – the Christopher Ward C60 Concept is a solid example. Concave bevelling on the other hand does the opposite, creating a smoothly curved recess in the bridge. It catches the light even better than your usual bevelling, but takes an exorbitant amount of time to accomplish. There’s a reason this is an industry first. 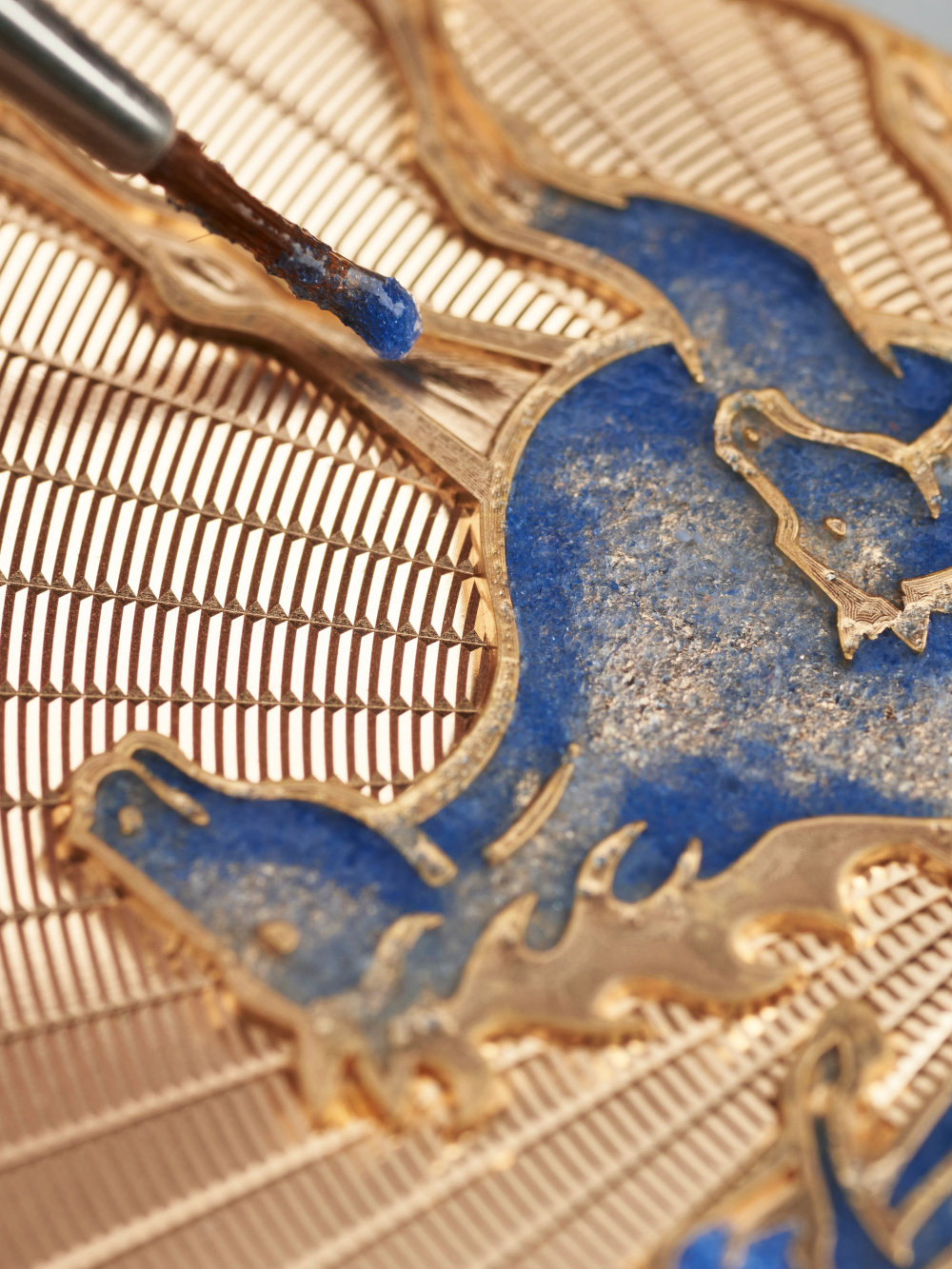 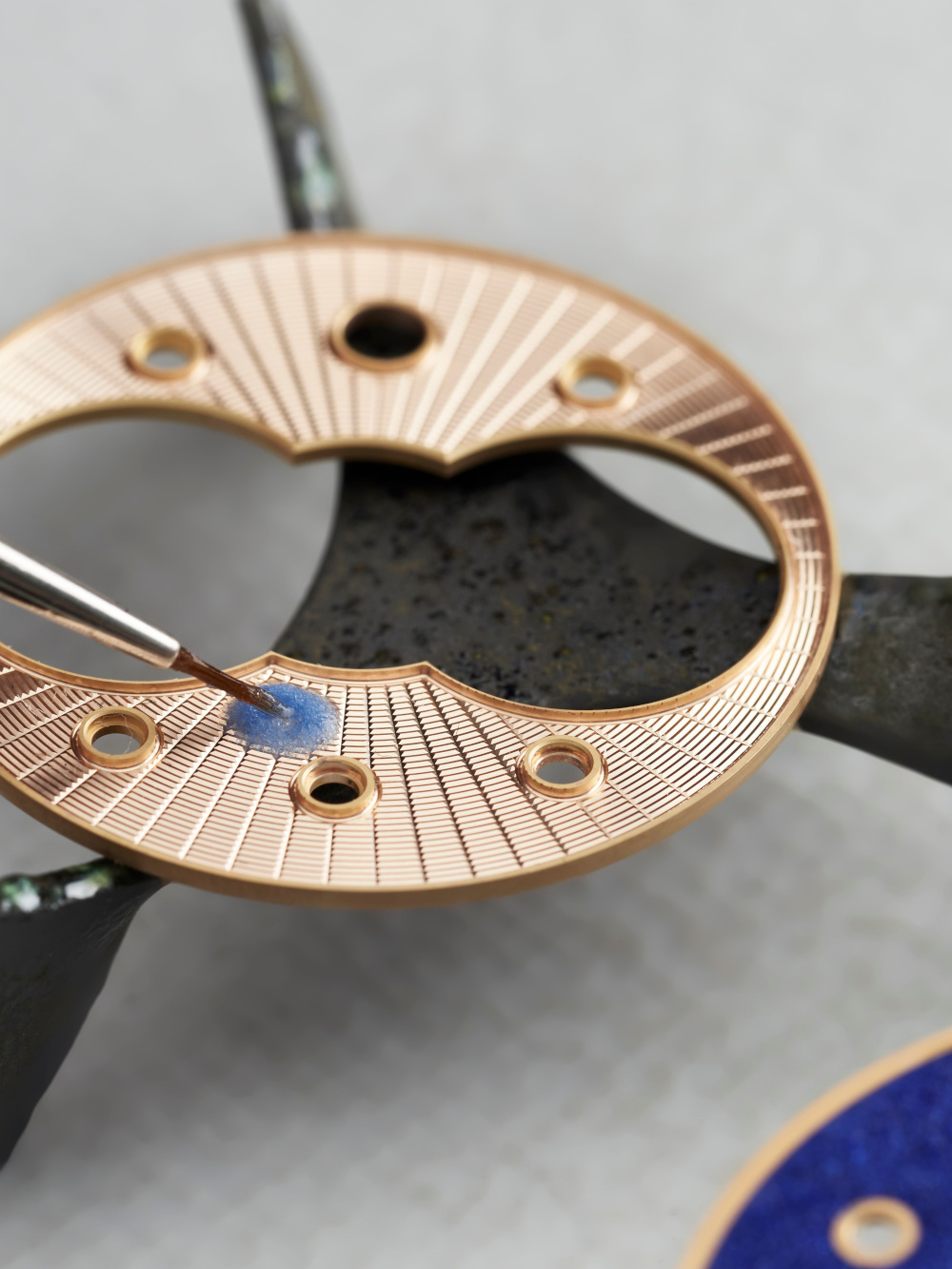 The top and bottom bridges share half their space with galloping horses, again painstakingly engraved, the reason GP are calling this watch “The Equine Mystery.” It’s an apt name, even if I can’t get a naked Harry Potter out of my head every time I read it. It also means that, in total, the bridges take 40 hours to produce.

Because even that’s not enough, both barrel bridge and 6 o’clock tourbillon have been elaborately engraved, adding another 50 hours to the production time. That’s as likely to separate a skilled watchmaker from his sanity as a serious collector his bank account. 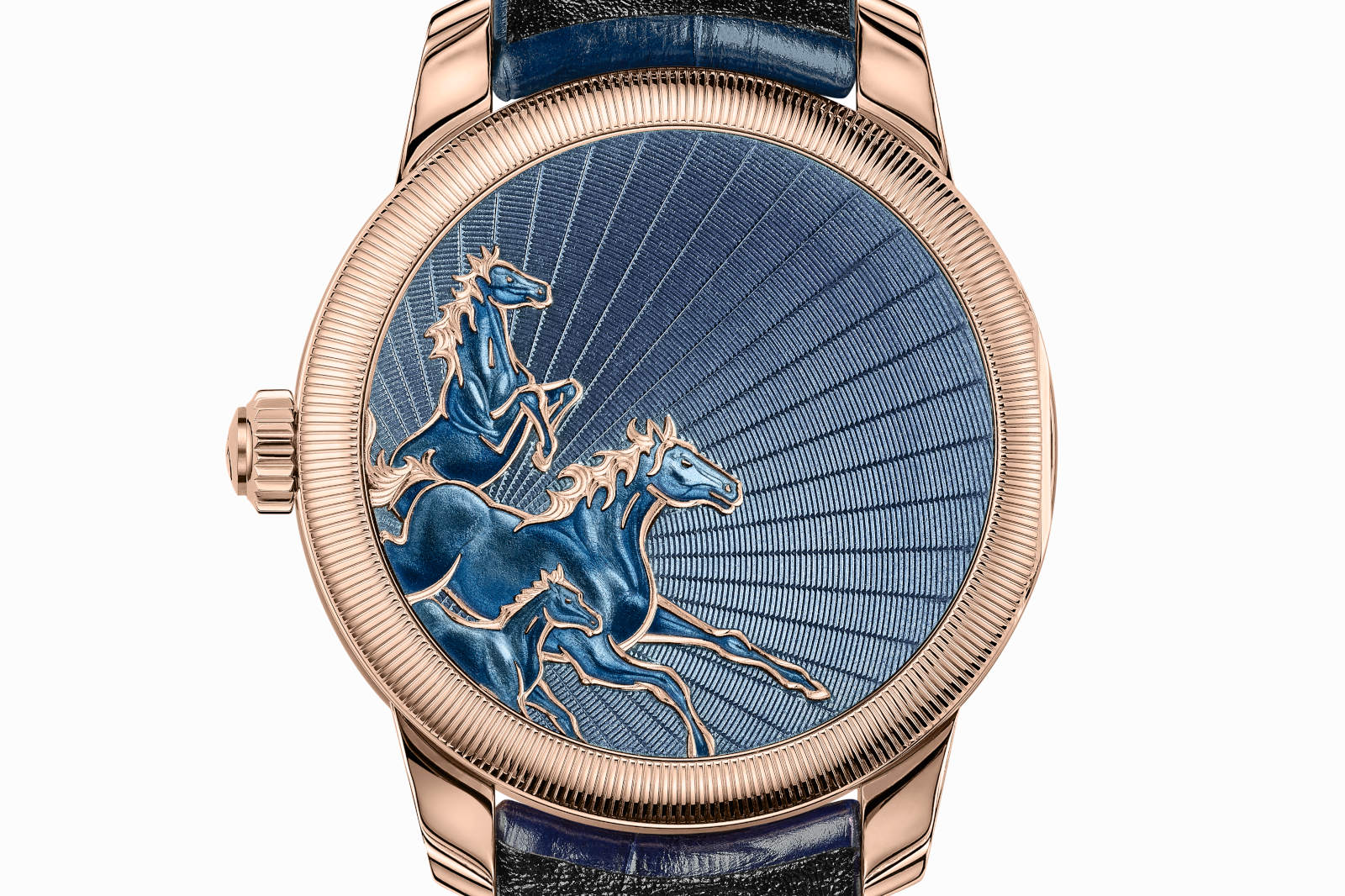 Like the rest of Girard-Perregaux’s ‘Eternity’ series, enamel plays a big part in La Esmeralda, not just on the dial side’s lovely deep blue, but across the sides of the rose gold case, in-between the obsessively engraved bezel and lugs, and the caseback. I won’t go into how grand feu enamel is produced – you can find more about that via the other GP Eternity releases we’ve covered – but suffice to say, it’s stunning.

That caseback mirrors the golden stallions on the dial side, this time in a heady mix of blue enamel and gold on a stunning blue background. It’s only slightly less ornate than the front, which isn’t saying much, and mainly due to the lack of bezel or engraving on the reverse of the lugs. It’s a lot to take in. It’s still also not everything. 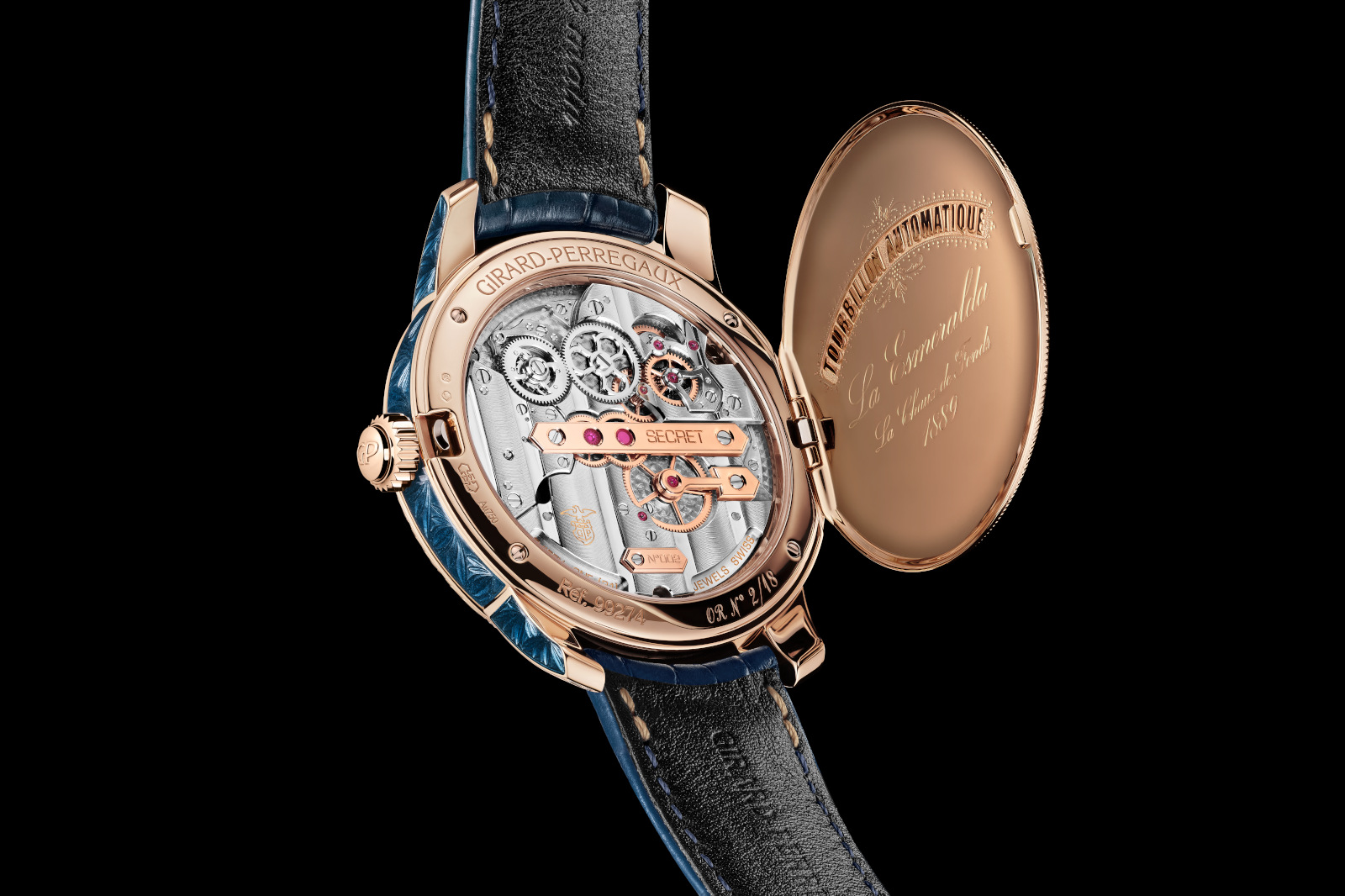 Hidden behind the hinged caseback is the the CNC-formed mainplate, which also features concave bevelling, guilloche and pearlage aplenty. The key element is the motion work bridge which partially imitates one of the front-facing bridges but is marked with the word ‘secret.’ The secret is just whatever engraving you care to get put inside the caseback, so perhaps not as mysterious as you were hoping for.

The movement itself is the GP09600-1506, which aside from the finishing, has a 50-hour power reserve, not bad for a tourbillon. It’s solid, but that’s not why you’d ever buy into La Esmeralda. The watch is as captivating a metiers d’art piece as we’ve come across and, while I’m not particularly enamoured by horses myself, it’s impossible not to appreciate the artisan skill on show.

Vacheron Constantin demonstrate their mastery of artisanal crafts with the Métiers d’Art Tribute to...