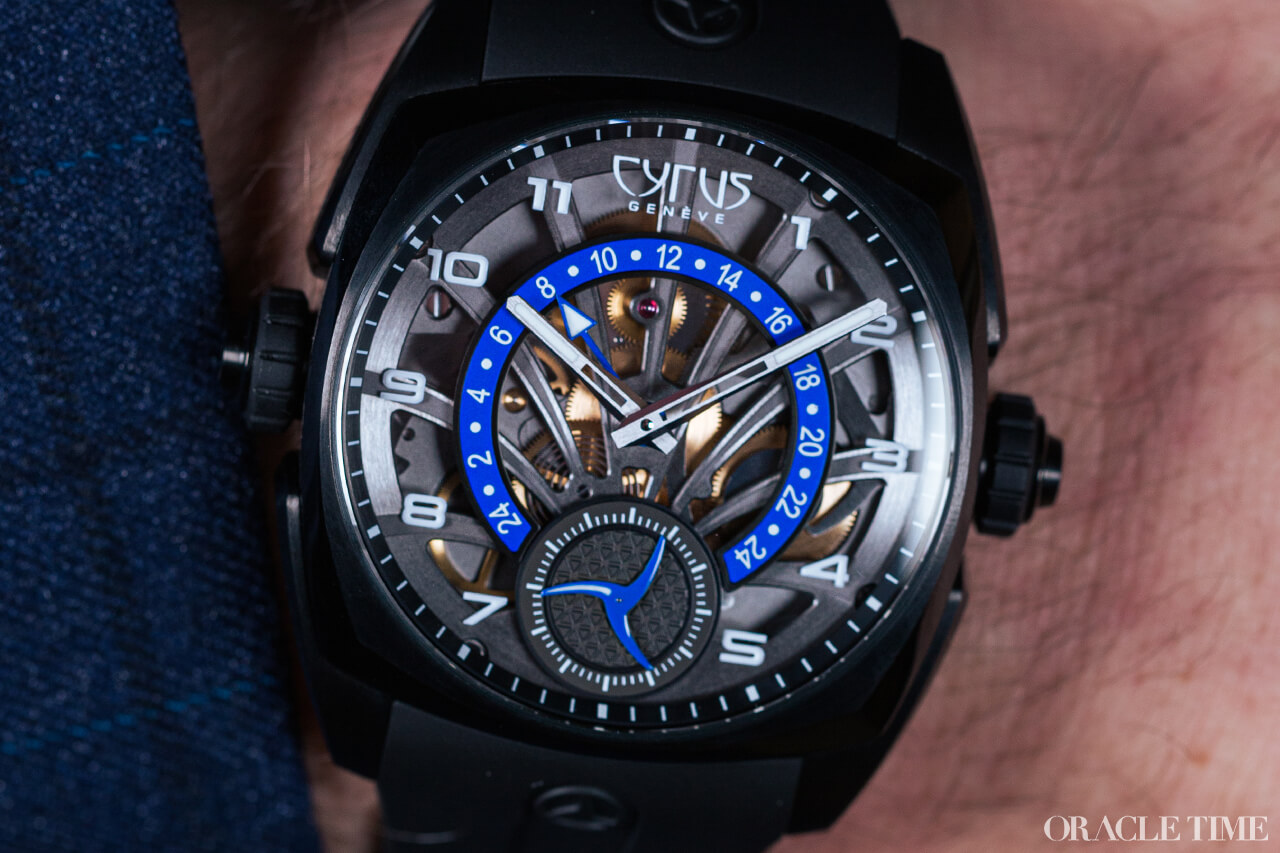 We’ve had the Cyrus Klepcys in once or twice before and it’s always something special. In fact, there are plenty of words I’d use to describe the collection – avant garde, a horological tour de force, stock phrases along those lines. But not, generally-speaking, wearable.

That’s not to say they’re not comfortable; far from it, the Vertical Tourbillon was far more comfortable than it had any right to be. It’s just that as an everyday watch, they’re a bit much in both function and dimensions. Which is what makes the intensely-haute horologist’s latest all the more interesting: the Klepcys GMT Retrograde is a genuinely great, everyday watch.

It’s not a beater of course; like the models before it, the GMT Retrograde is a superlative piece of watchmaking. The skeletonised dial with its fan of bridges illustrates that succinctly enough. But a GMT function is an innately useful complication and here done with a distinctive flare via the blue retrograde home time function. The matching blue hand counts down the 24 hours along the scale then zips back to the beginning. 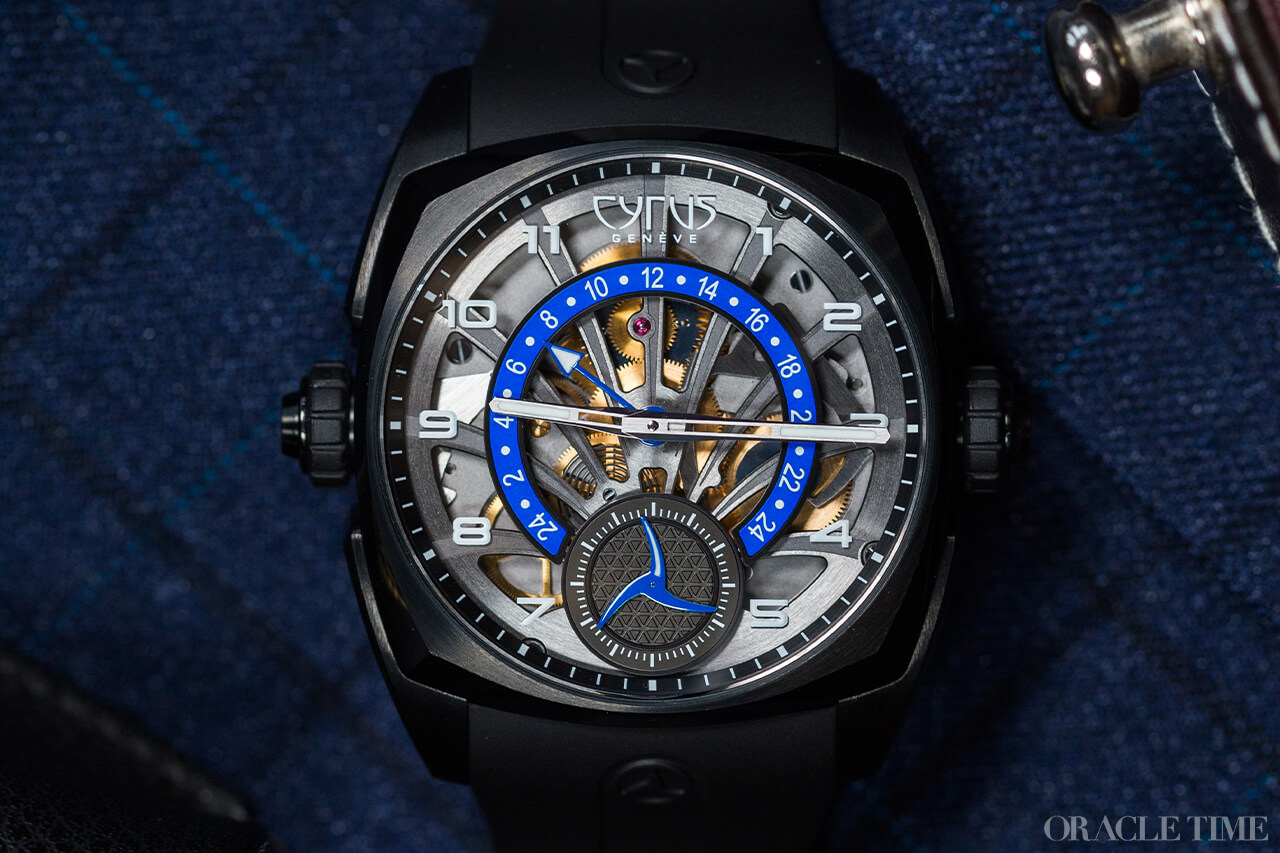 The bright blue also matches the helix counter of the small seconds at 6 o’clock, a nicely-decorated counterpoint to the openworked dial. You can’t see it in our well-lit shots, but the lume on the numerals is also blue; not quite as bright of course, but there’s a cool synergy there.

Home time and minutes are set via the crown at 3 o’clock as per usual; from there though, the local time hour hand can be jumped from hour to hour with a push of the button set into the opposite crown at 9 o’clock. It makes hopping from timezone to timezone nice and easy – not that I managed to do much jet-setting with this thing. 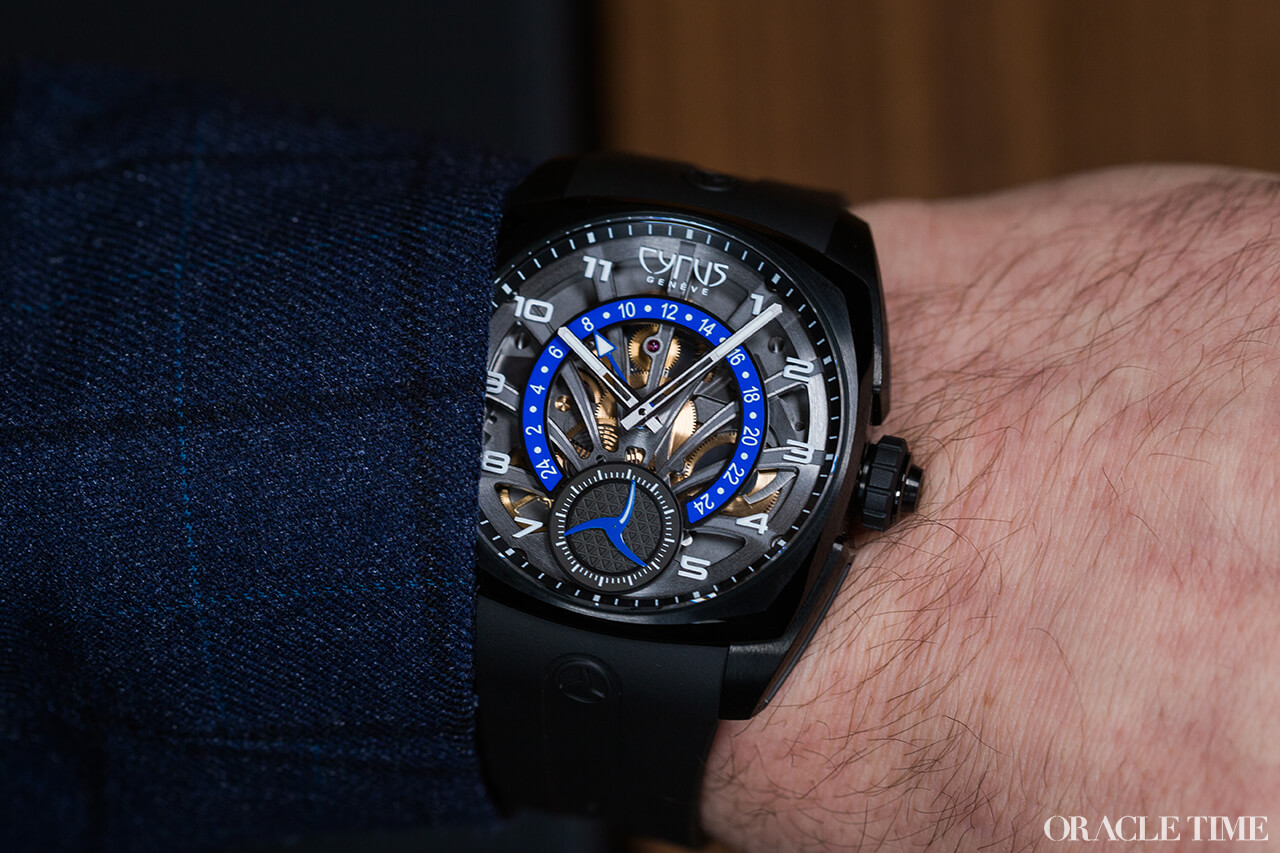 To make it even more of an everyday, wearable watch, Cyrus has downsized the case a little, down to 42mm (excluding the crowns of course, they’re pretty substantial). It’s also thinner at 13.9mm, slim enough to fit under a shirtsleeve. It’s still a relatively broad piece of metal though with its lozenge shape, but it’s far, far more wearable in its new dimensions.

That goes for the material too. The grade 5 titanium makes the Klepcys far lighter than it looks and in turn sit more comfortably on the wrist. That’s helped along by the integrated rubber strap which is distinctly curved to fit snugly to the wrist. Don’t get me wrong, the GMT Retrograde does still feel big, just not the monster some of Cyrus’ pieces can be. As a final nod to everyday wearability, the case is water resistant to 100m. 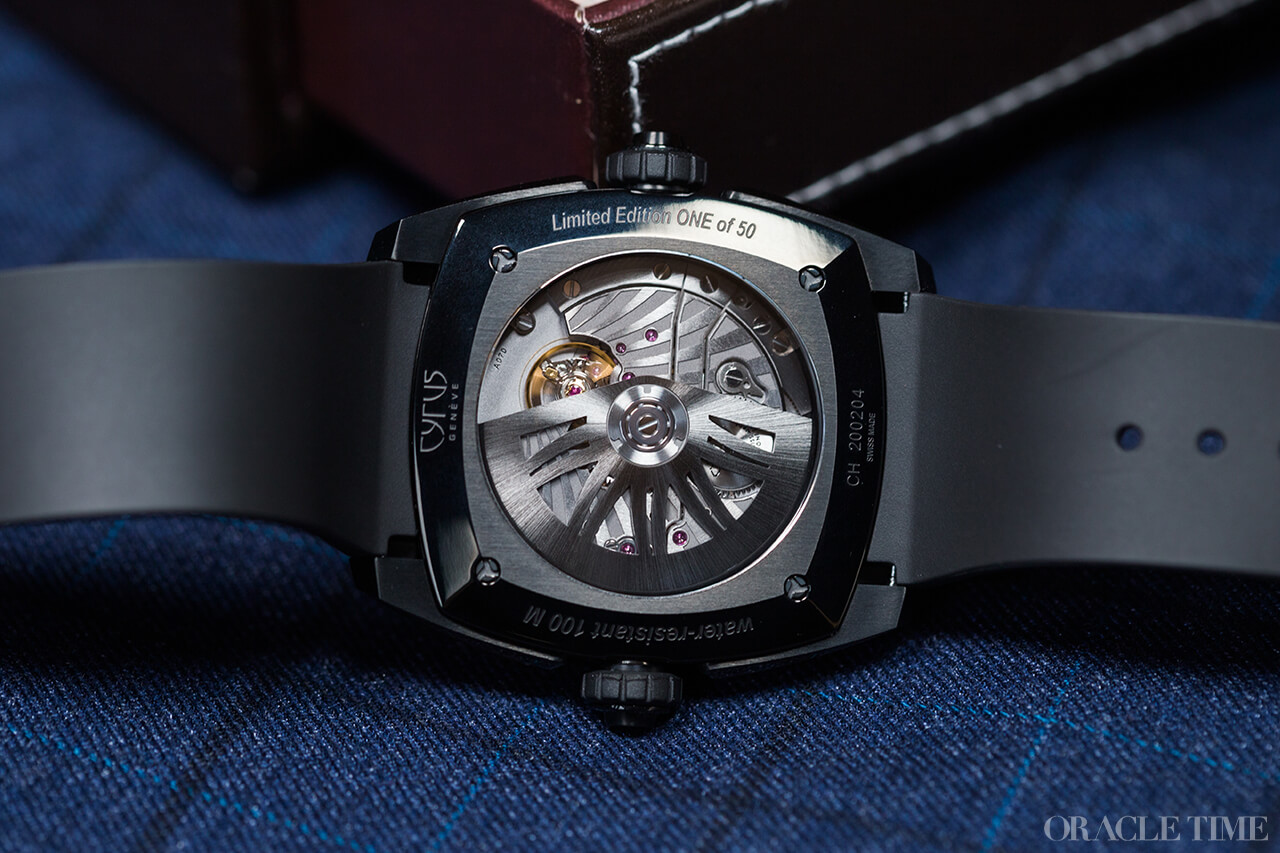 Off the wrist, the caseback gives a good look at the CYR708 calibre inside and it’s worth seeing. Alongside the custom rotor – which mirrors the shape of the openworked dial – the bridges have been given a supremely cool anthracite finish in sunray curves. Offering a solid 55-hour power reserve, it’s a damn fine calibre.

Limited to 50 pieces in each of its trio of variants – raw titanium, black DLC and a mix of the two – the Klepcys GMT Retrograde’s a superb bit of watchmaking and quite possibly the most wearable Cyrus yet. For €18,600 in this all-black, stealth variant, it’s a hell of a lot of watch.