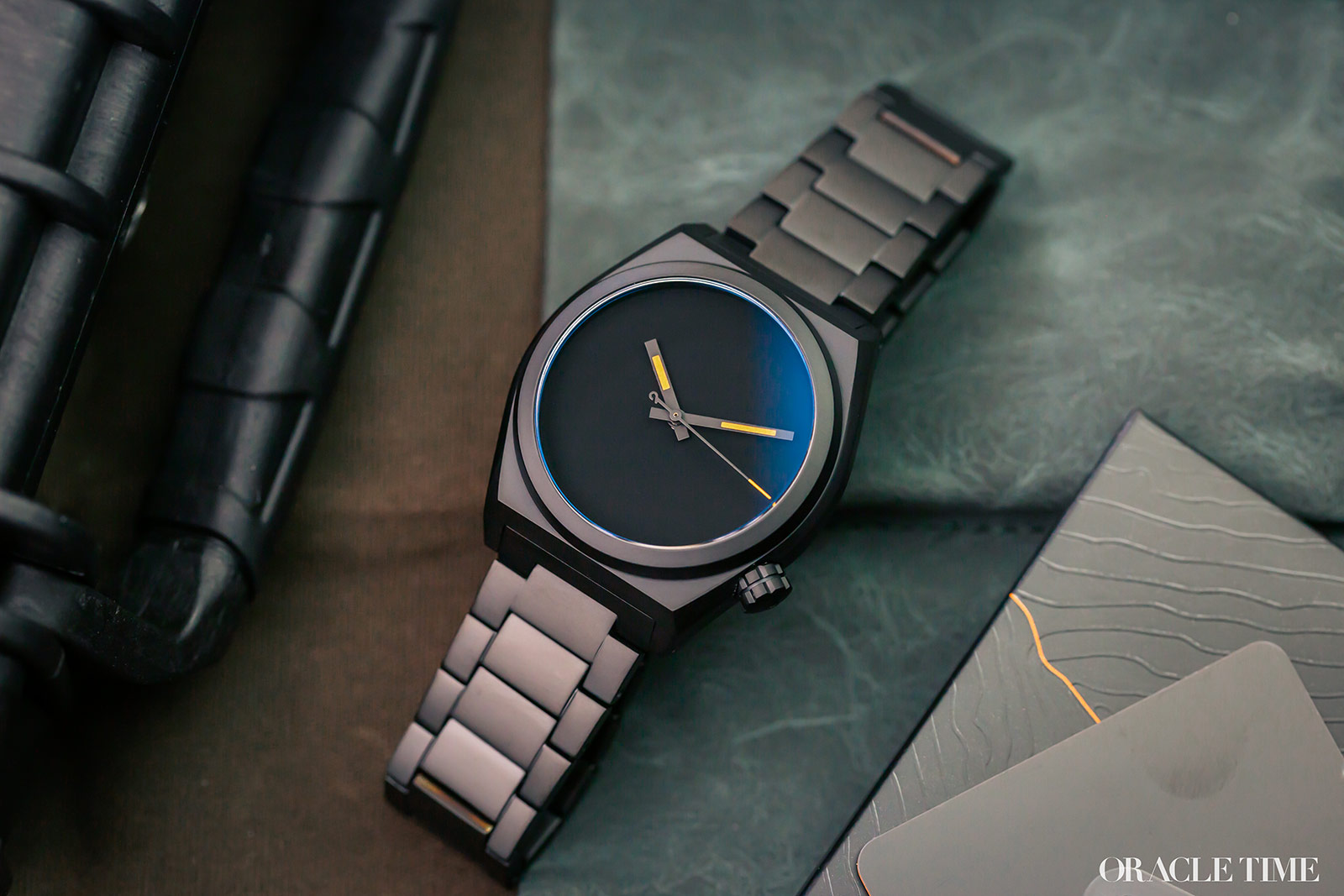 Henry Ford famously said, ‘you can have any colour as long as it’s black’ and while there’s been some kickback from the watch industry in recent years by embracing colour, black is still an eternal. Black dials are everywhere, from simple diving watches to slabs of onyx. The question then is how do you do black and stand out? Obvious: make it the blackest black in the world. That’s certainly Boldr’s philosophy with the Venture Singularity.

A lot’s been said in the past about Vantablack. An acronym of Vertically Aligned Nanotube Arrays (I won’t get into the science of what that actually means, don’t worry) is a type of coating that absorbs 99.965% of visible light from pretty much any angle. In essence, that means anything coated in the stuff seems like a silhouette of itself. It’s damn unnerving, like your eyes are losing the plot.

It’s also incredibly cool and incredibly expensive. The former speaks for itself. The latter is because unless you handle it properly, you ruin the delicate coating. It’s historically pricey enough that most watch brands have avoided dabbling in Vantablack other than Moser, predominantly because Moser & Cie are a little bit insane. 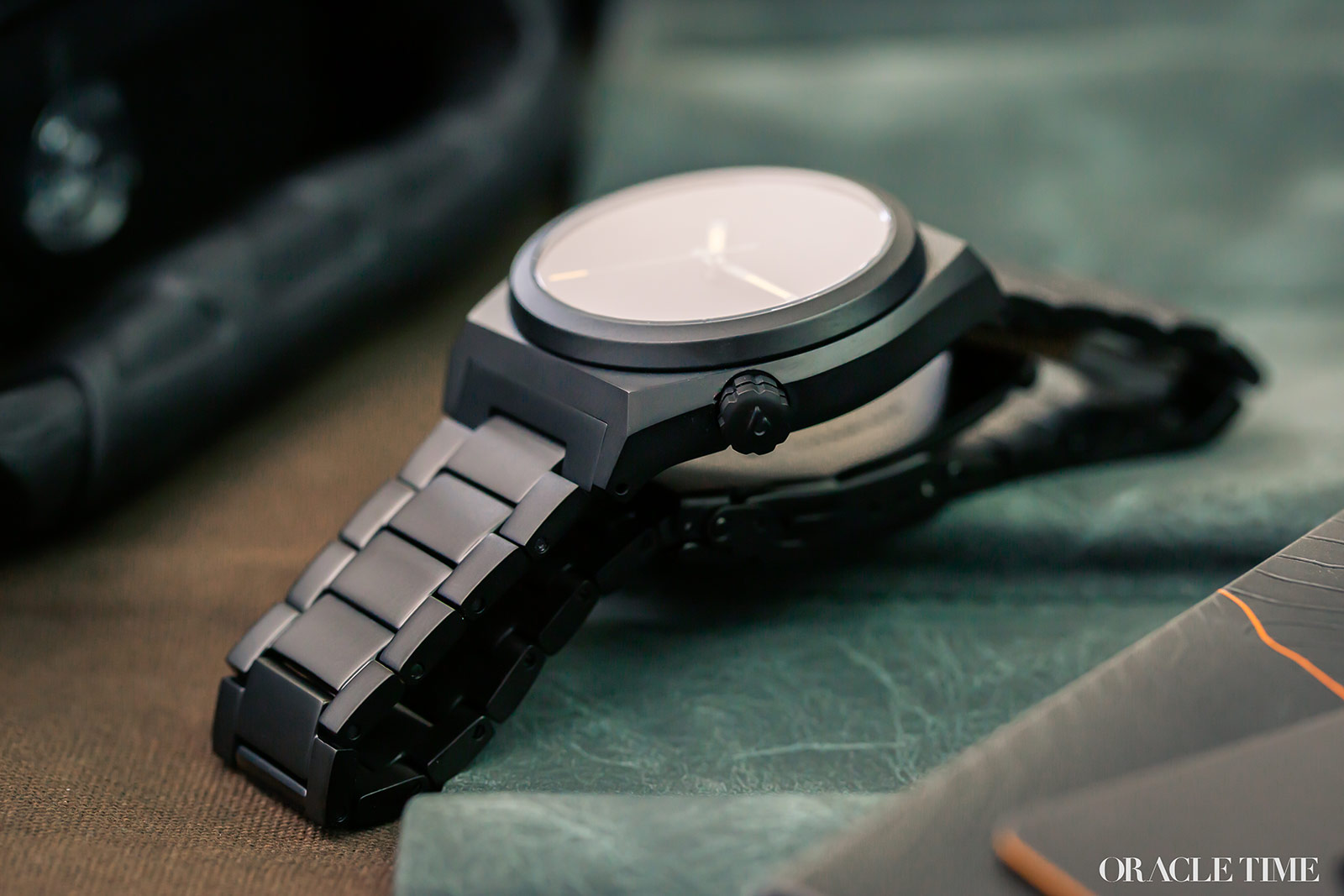 Thankfully it’s not the only option. Musou Black is the next best thing and, for your eye, it’s as close as makes no difference. Plus, it’s cheaper to produce, easier to hand, and on Boldr’s latest take on their flagship Venture, the Singularity, makes for one hell of a visual statement.

The 38mm, faceted titanium case of the Venture Singularity is anything but intimidating. It’s lightweight and utilitarian, deceptively simple field watch fare defined by it’s four o’clock crown. Slap a brooding dial like this on it though and you have something entirely new.

The Musou black coating on the Boldr Venture Singularity actually absorbs 99.4% of light but the effect is the same. Dark as the PVD black case is, the dial is a hole in space and time. There is some light in the darkness though, with orange lumed hands, apparently inspired by the glowing gases around black holes. 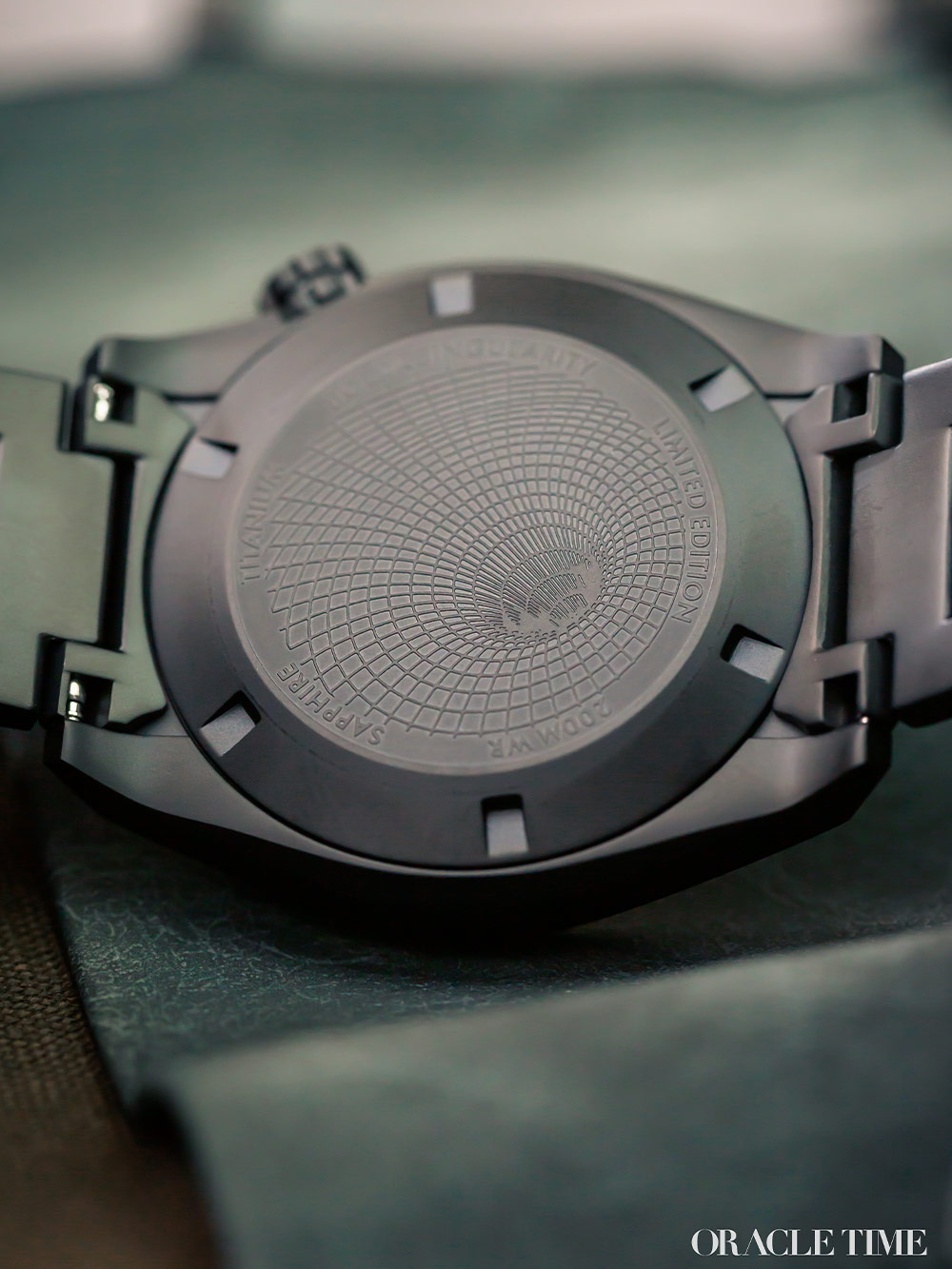 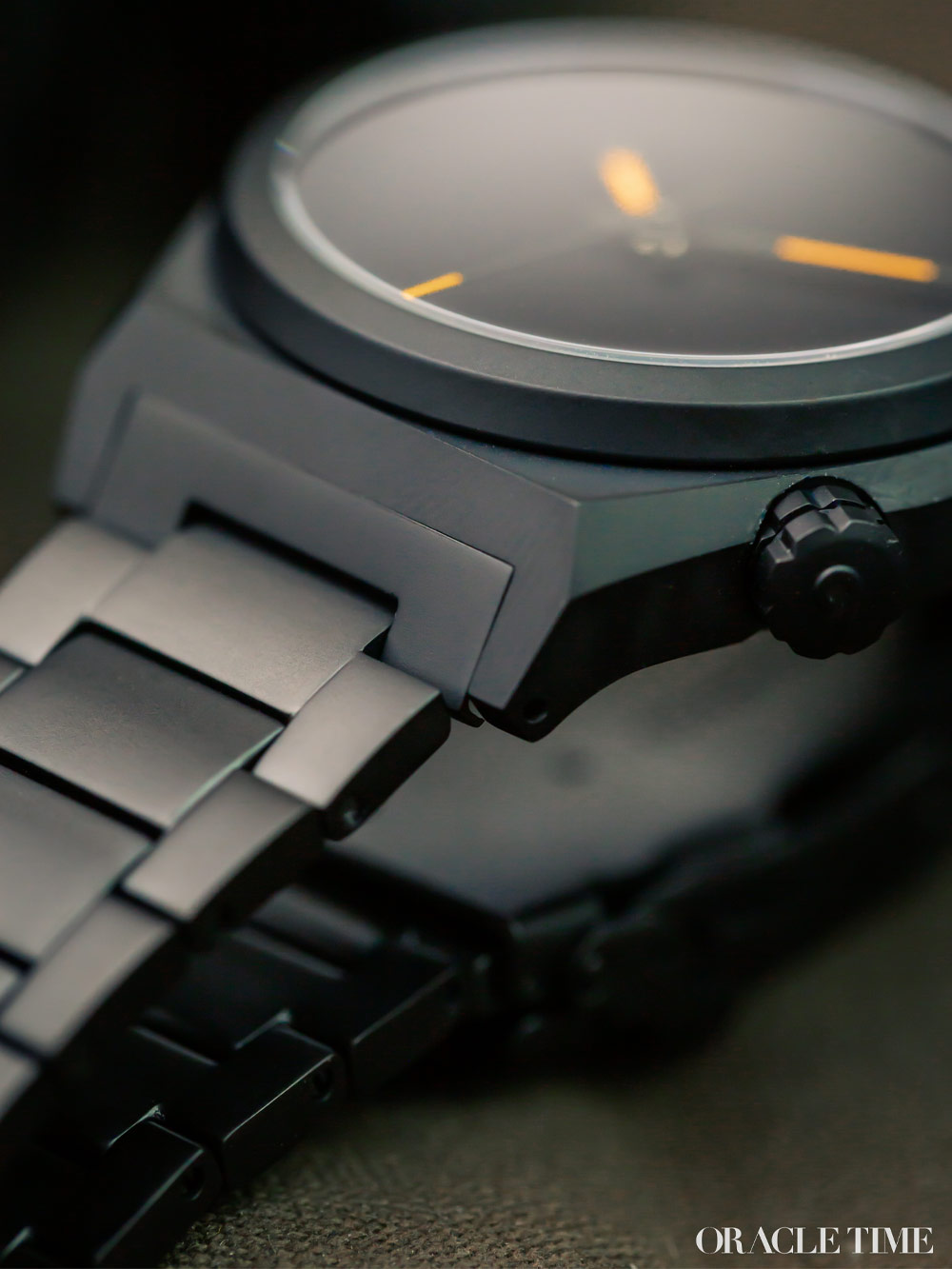 Using H3 gas tubes a la Ball would have been cool, but while radioactive materials around a singularity is apt (Stephen Hawking’s eponymous radiation can be found emanating around a black hole), standard lume keeps an already odd duck from mutating into something altogether too weird. Either way, there’s no danger of the orange glaring onto the dial which just absorbs the light, so the effect is of the hands skimming over a void. Your eyes probably think it’s a mystery watch.

The titanium bracelet is blacked out too, and the overall impact is of the stealthiest of stealth watches. But thanks to the contrast with the dial, the PVD titanium doesn’t actually look as dark as you might expect. Pair that with the 38mm sizing and light weight (91g), and the Boldr Venture Singularity is a fantastically wearable watch. It’s a little lightweight for my tastes, but it’s comfortable and the bracelet sits nicely.

Inside is the Seiko SII NH35A and while it might not have the best reputation in the world, is still a solid workhorse calibre. It lacks the finishing of other movements, but when you have a solid caseback it’s hard to care. That caseback is engraved with a depiction of the event horizon of a black hole, which is the point past which nothing – including light – can escape. 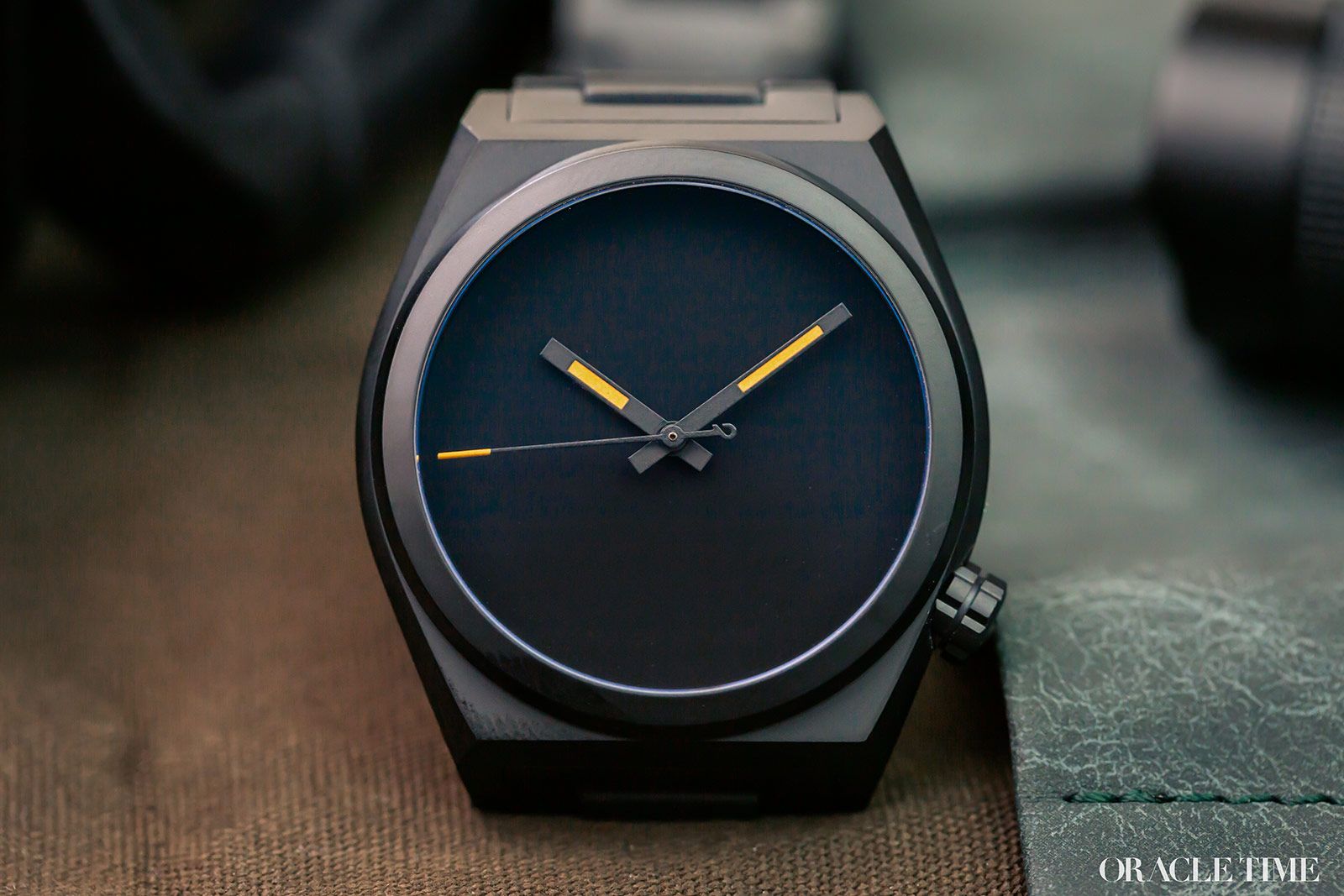 I’m not generally a fan of novel materials. Titanium’s often too light for me and I didn’t care too much when Moser & Cie opted for Vantablack. But this… this is cool. The fact that this is a field watch works perfectly with the whole night mission spec ops side of the genre and the orange lume means that it’s actually readable. Who’d have thought it? Can I see myself buying it in the future? Sure, why not – which brings me to perhaps the coolest part of the watch, the price.

Boldr (read more about them here) already offer some serious accessibility in their collection especially when it comes to titanium, and there are plenty of Venture variations that flex that value. The fact that the Singularity comes in at just £410 right now – is crazier than Sam Neill’s Event Horizon. And will probably age a damn sight better, too.