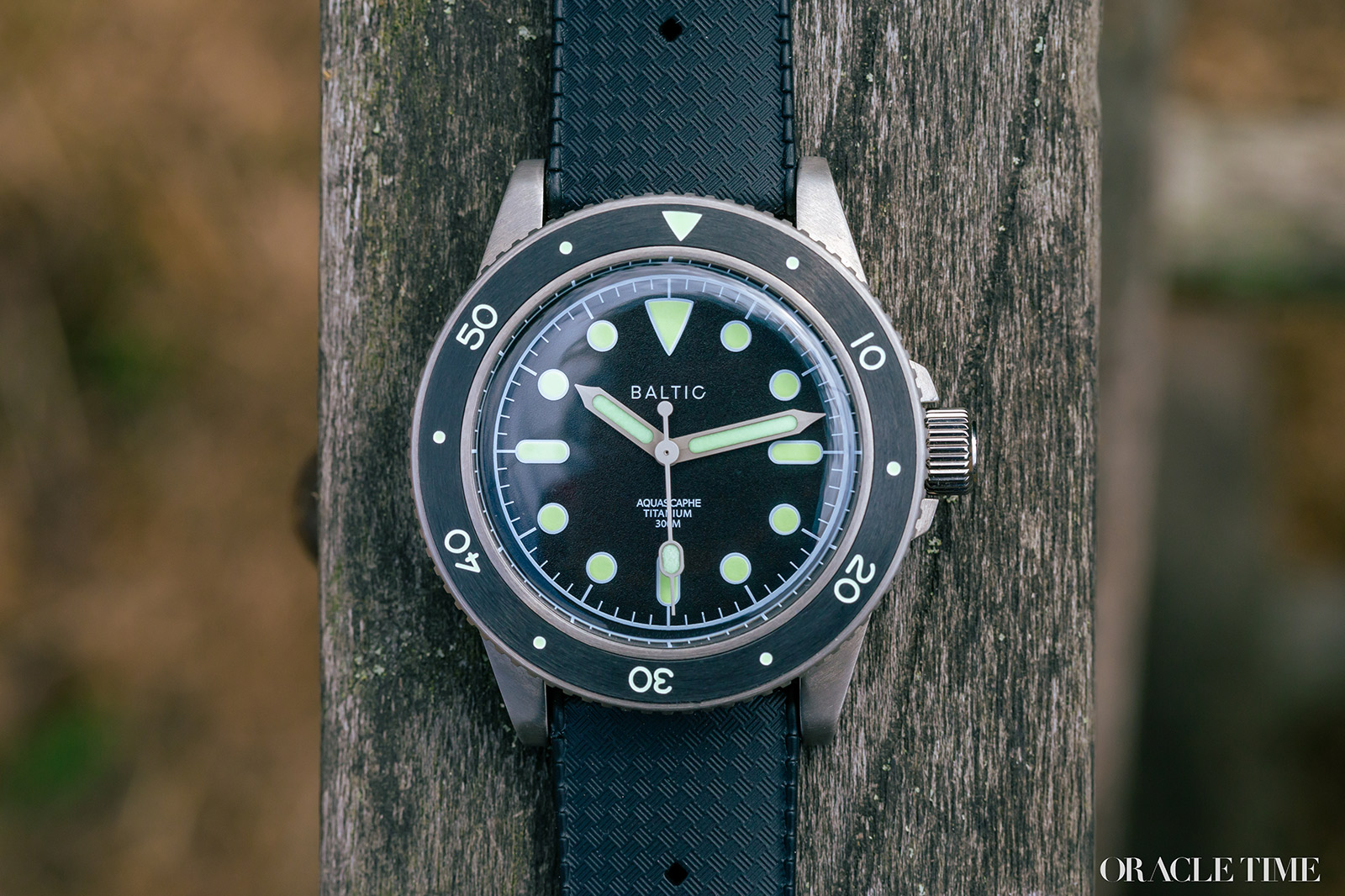 Baltic is on an ascendancy that few watchmakers can match. Its initial dive watches were met with the kind of success you can’t manufacture, and the brand has since made lightning strike more times than a finial in a storm. At this point, calling Baltic a microbrand feels disingenuous – it was even in Only Watch for god’s sake. But even something like the incredibly successful Aquascaphe can do with a refresh now and then – which is why we now have the Baltic Aquascaphe Titanium.

The diver, which draws plenty of vintage inspiration from the golden era of dive watches (think Fifty Fathoms, Cousteau- slanted utilitarian elegance) has been the focal point for Baltic since 2018, the brand’s bread-and-butter tool timepiece. Throughout the collection so far, we’ve seen a few different case finishes – steel, PVD, bronze – but titanium is a first. 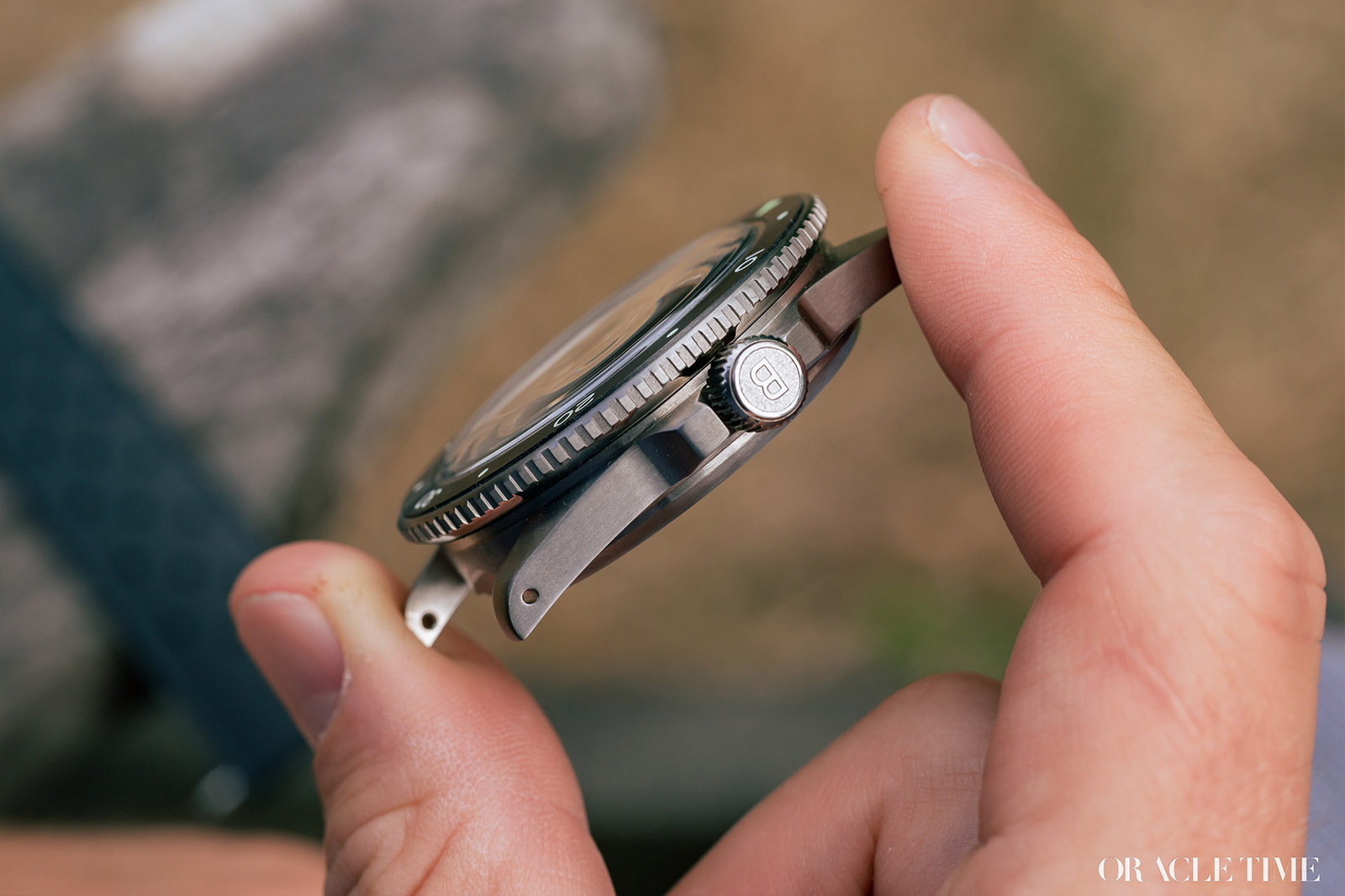 We won’t spend too long explaining why titanium makes perfect sense for a dive watch. Suffice to say, it’s light, hardwearing and has a cool, grey look that works incredibly well on a tool watch. It’s common enough in the watch world now that we even shot a series of cool, titanium pieces for our Best Titanium Watches You Can Buy article. We actually wanted to get the new Baltic Aquascaphe Titanium in there, but you know. Brexit.

Was it worth the wait? Well, yes. We’re huge fans of the Aquascaphe anyway and while we’re particularly enamoured with the GMT over the standard diver, it’s impossible not to love these retro vibes, especially with the wearability of titanium. But writing it off as just the standard watch in a new material is very much not the case. 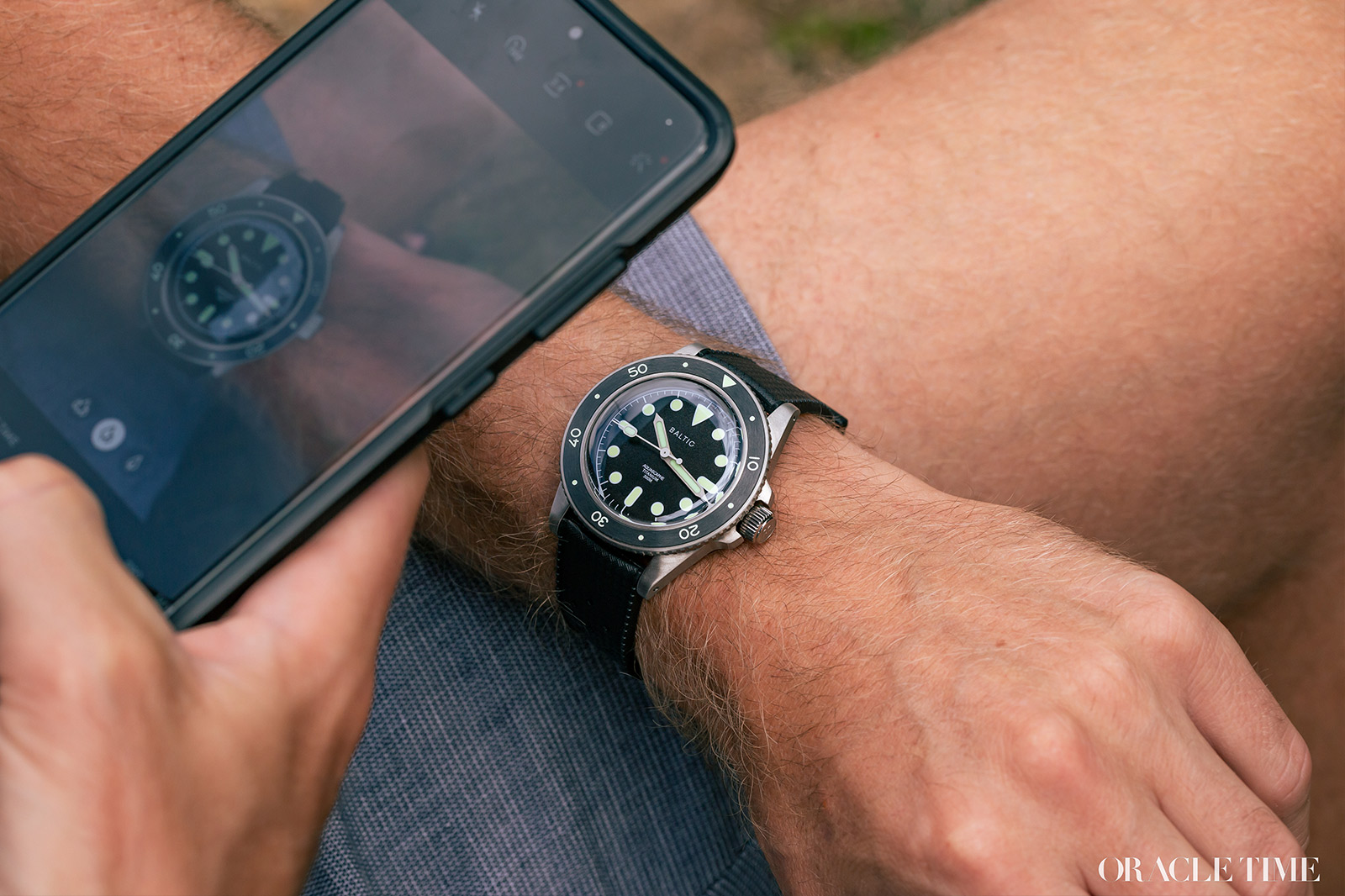 The case silhouette with that slightly overhanging bezel remains the same, but the size has changed, upping from 38mm to 41mm, essentially shifting from vintage proportions to something more modern. It does feel a bit larger on the wrist, but honestly that’s as much to do with the new crown guards as it is the actual diameter increase.

The bezel too has been given a slight overhaul. First off, it’s now ceramic, a first for the collection. It’s also slightly thicker and with 10, 20, 30, 40 and 50 marked off instead of 15, 30, 45. It’s a more practical look but a bit less elegant. The same can be said of the dial which has upped the size of the indexes and swapped the sharp triangles at the cardinal points for a shark’s tooth at 12 o’clock and pill- shaped indexes at three, six and nine. 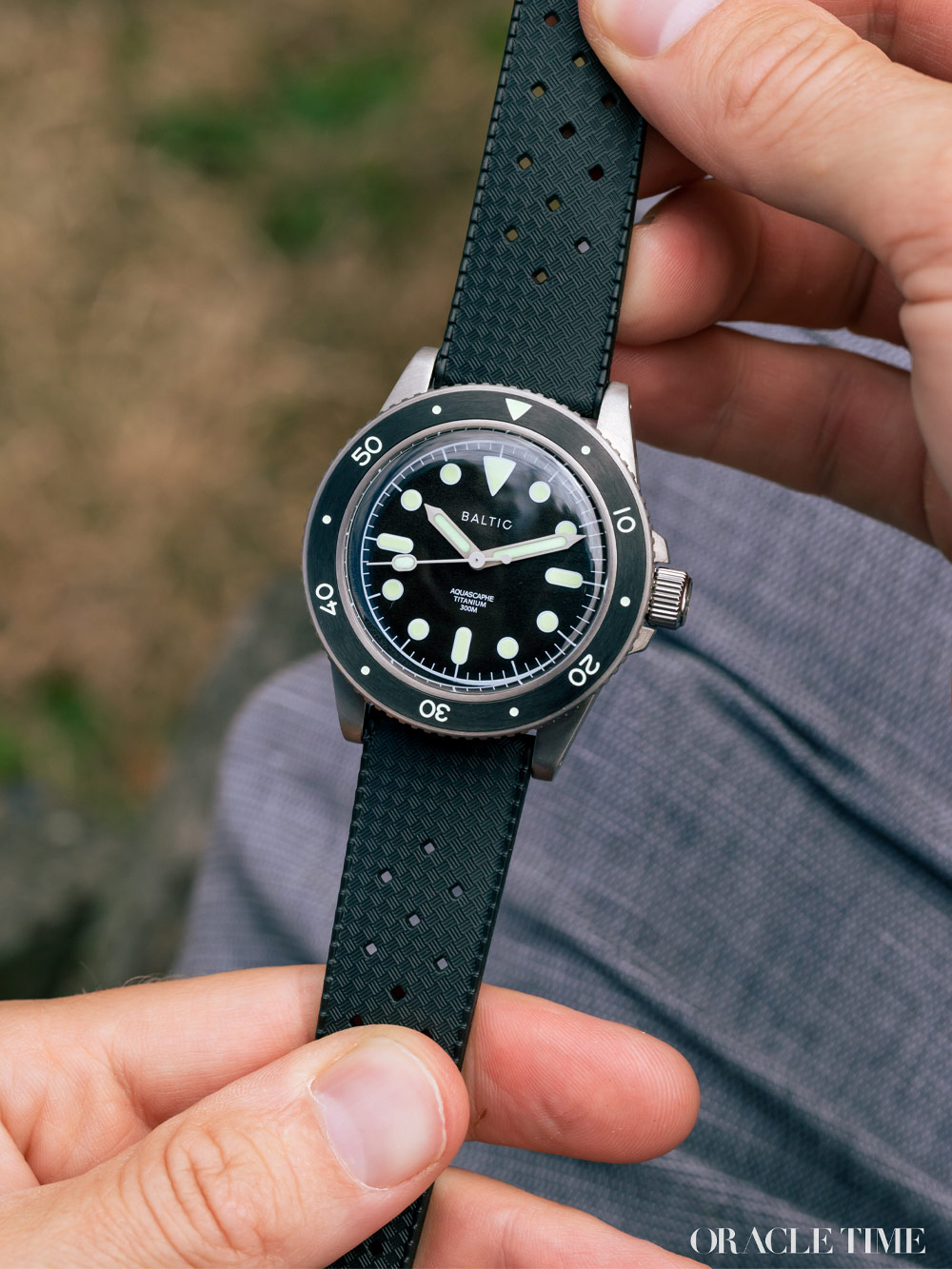 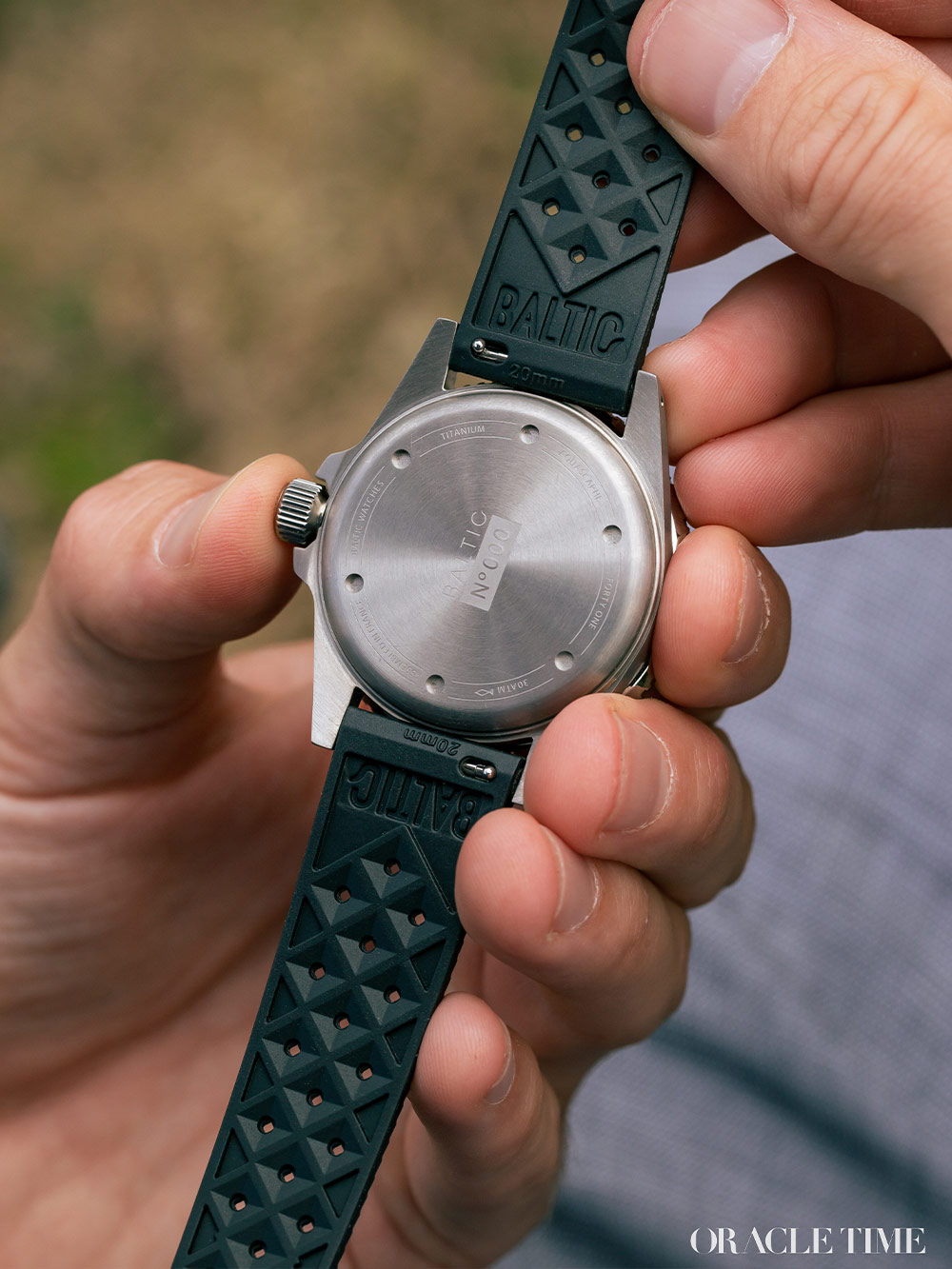 Put together, it’s a host of small changes that alter in no insubstantial way the feel of the Aquascaphe. The smaller, more minimal Aquascaphe Classic is retro-elegant as much as it is utilitarian. The Titanium feels more like a proper, rugged tool watch, complete with an increased 300m water resistance that many an actual diver out there will appreciate.

There are two variations available: a glossy blue dial and bezel with light blue lume-filled indexes and this version, which opts for the more traditional black with green lume. This is one of the very few times we actually prefer the black to the blue; it’s more in keeping with the practical matte finish of the metal. 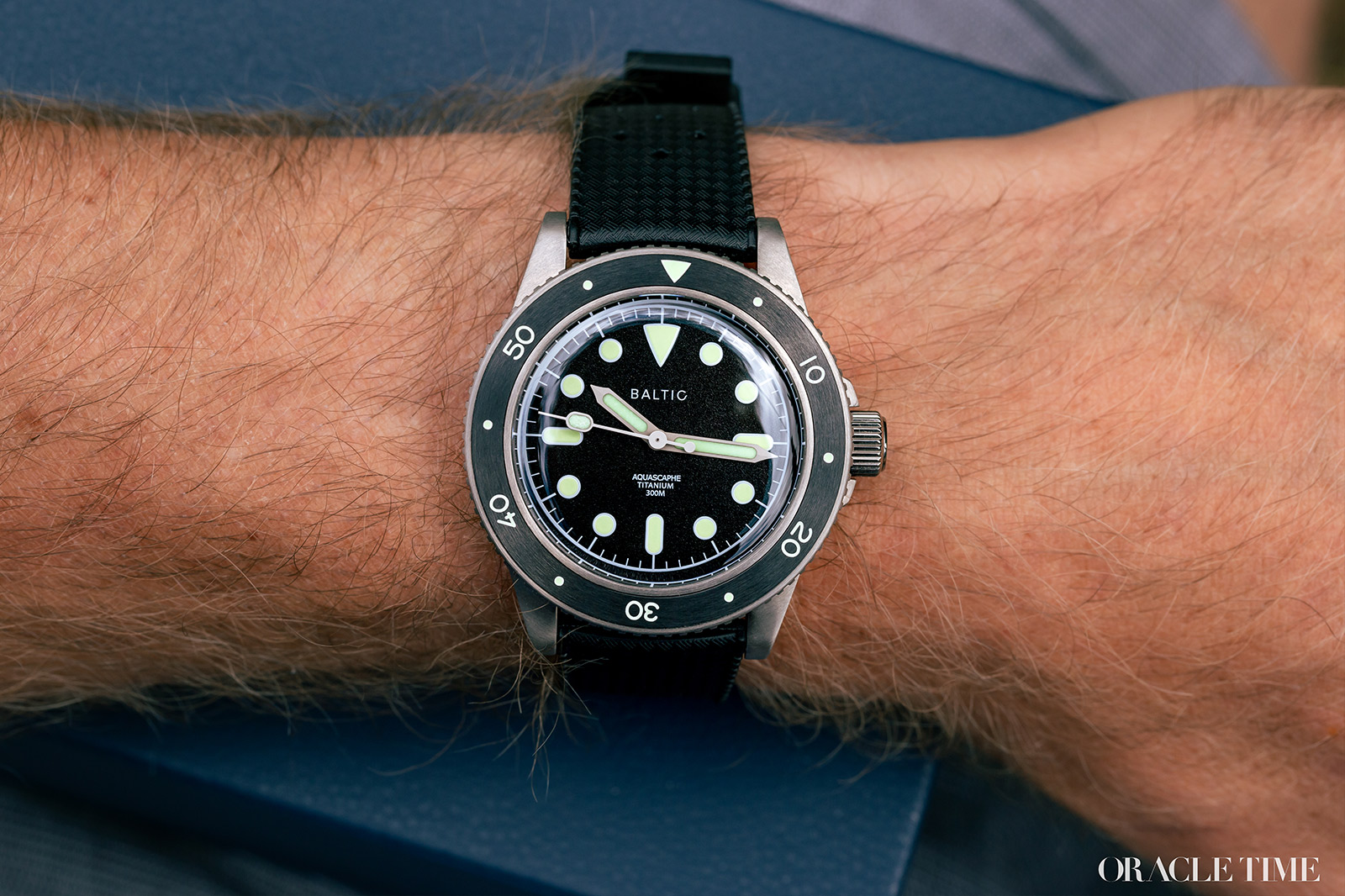 The only thing that’s not changed between the Baltic Aquascaphe Classic and the Baltic Aquascaphe Titanium is its movement, the ever-reliable workhorse that is the Japanese-made Miyota 9039, the Toyota of the watch world. It has a standard 42-hour power reserve, everyday levels of accuracy and, perhaps most importantly, doesn’t break the bank.

That little nugget means that, despite being housed in a much more advanced material, opting for a ceramic bezel, upping the case size and just generally overhauling the Aquascaphe into a bigger, heftier watch, the price hasn’t increased too much at all. The Classic will set you back €580 (just under £500), while the Titanium is priced at €710 (approximately £600). Given the current intense competition at the sub-£1,000 realm of microbrands, that’s pretty incredible. At the very least, it goes to show Baltic’s Only Watch debut didn’t go to its head.