Ever since Flavor Flav decided it would be a good idea to wear a clock around his neck in the late 80’s it seems that hip-hop and horology were destined to be together. Nowadays you can’t listen to a rap track without discovering some sort of luxury brand placement. In fact some mumble rappers have even taken to dedicating entire songs to brands. I’m looking at you Lil Pump. They may love to reference fashion houses, car marques and even artists, but most of all rappers love to talk about their wrist game, with each generation seeming to get more savvy and esoteric with their selection of brands. With all that in mind we’ve picked our top six songs that reference horological houses. 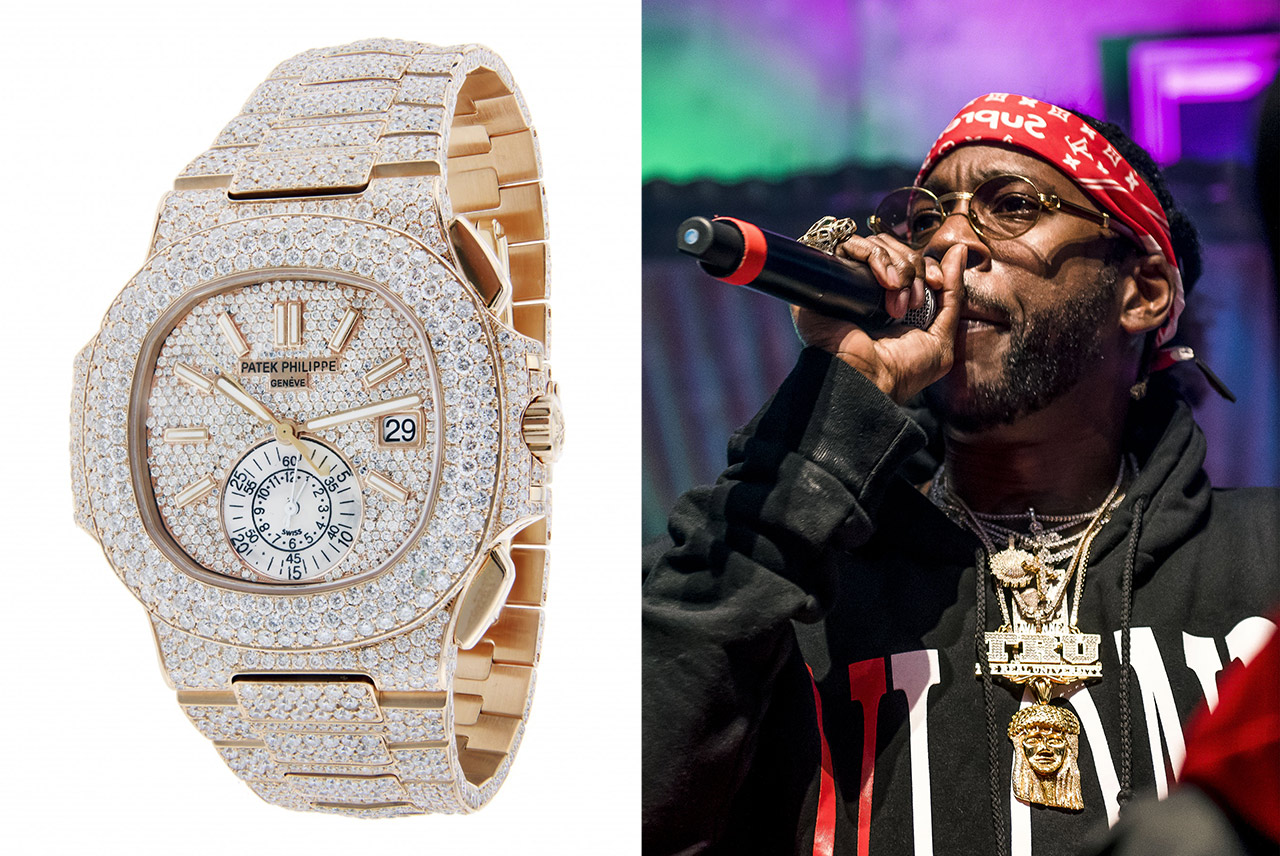 With a name like Two Chainz it would be silly to reserve you’re your bragging to simply what you wear around your neck. In ‘Realize’ 2 Chainz eschews the aviation-based Breitling brand and reserves his praise for the most prestigious name in the game. Though someone should really tell him that he won’t ever actually own it. At least his son will be happy. 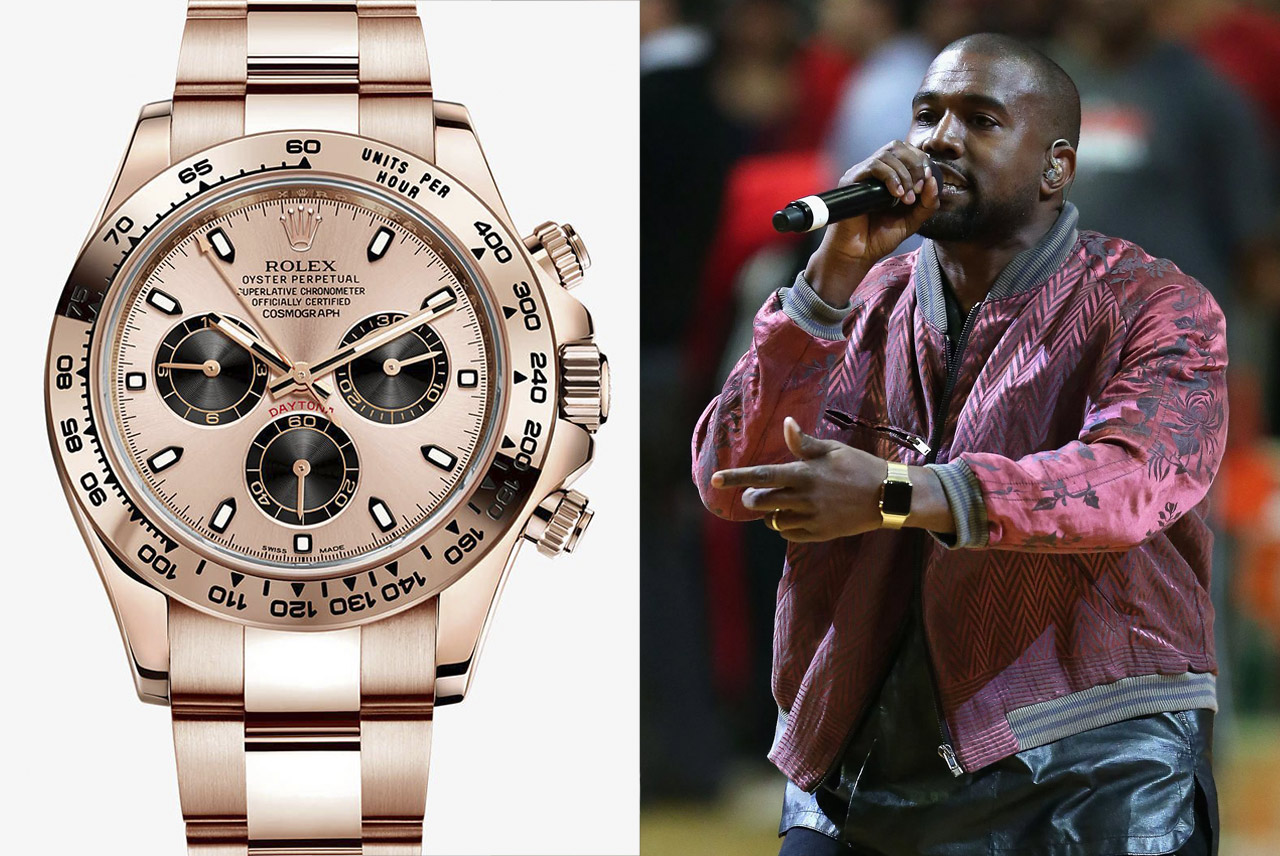 “Matching Daytona’s rose gold on us”

Kanye West is no stranger to a bit of #humblebrag and since he hired Pusha T as the President of the GOOD music label it seems they have enjoyed somewhat of a bromance, opting for matching Rolex Rose Gold Daytonas. Cute. 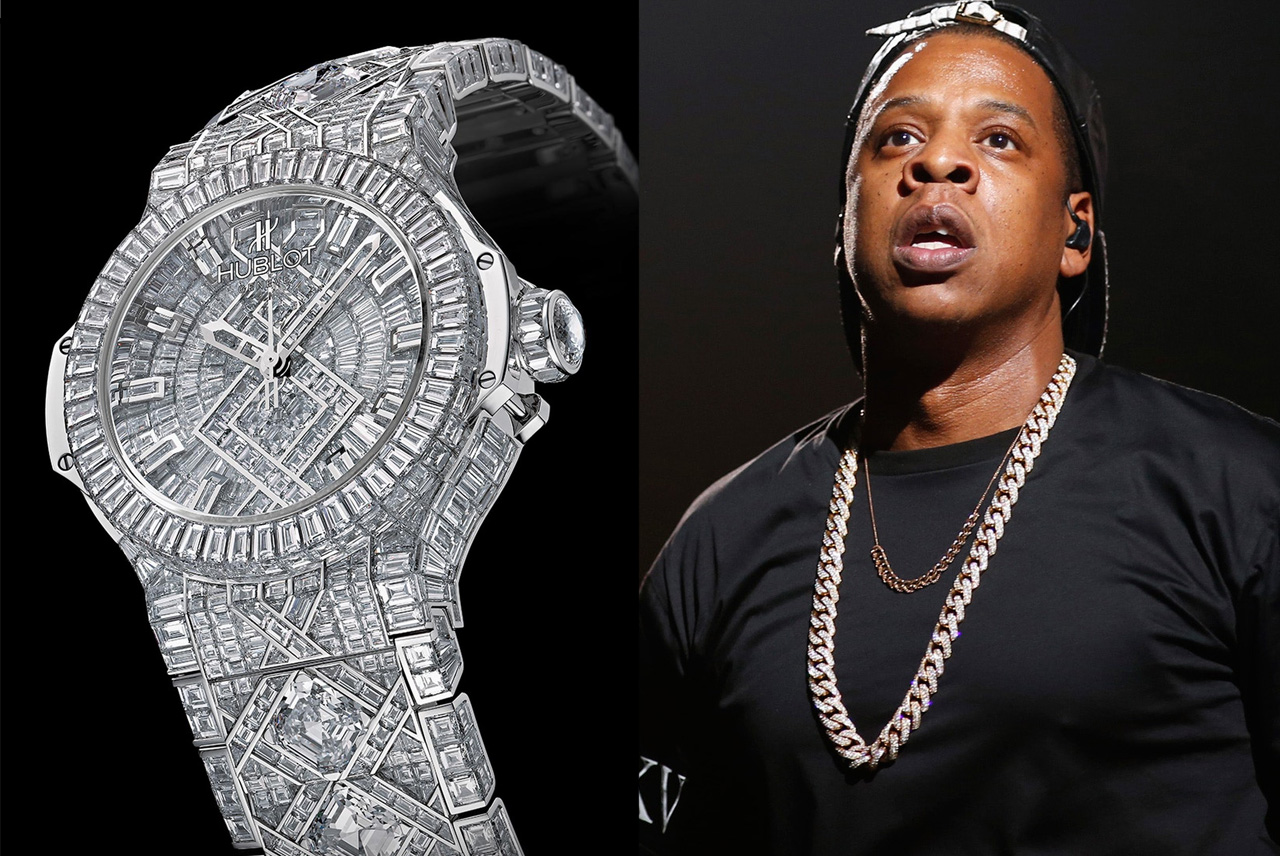 “New watch alert: Hublots
Or the big face Rollie / I got two of those”

In the song that put luxury rap on the map Jay Z & Kanye West play off each other and compare their flows to the “Hermes of verses” while chopping up a Maybach and cruising around with supermodels in tow. Nice and subtle then. Their watch choices lack subtlety too, plugging the oversized Hublot and of course everyone’s favourite, Rolex. 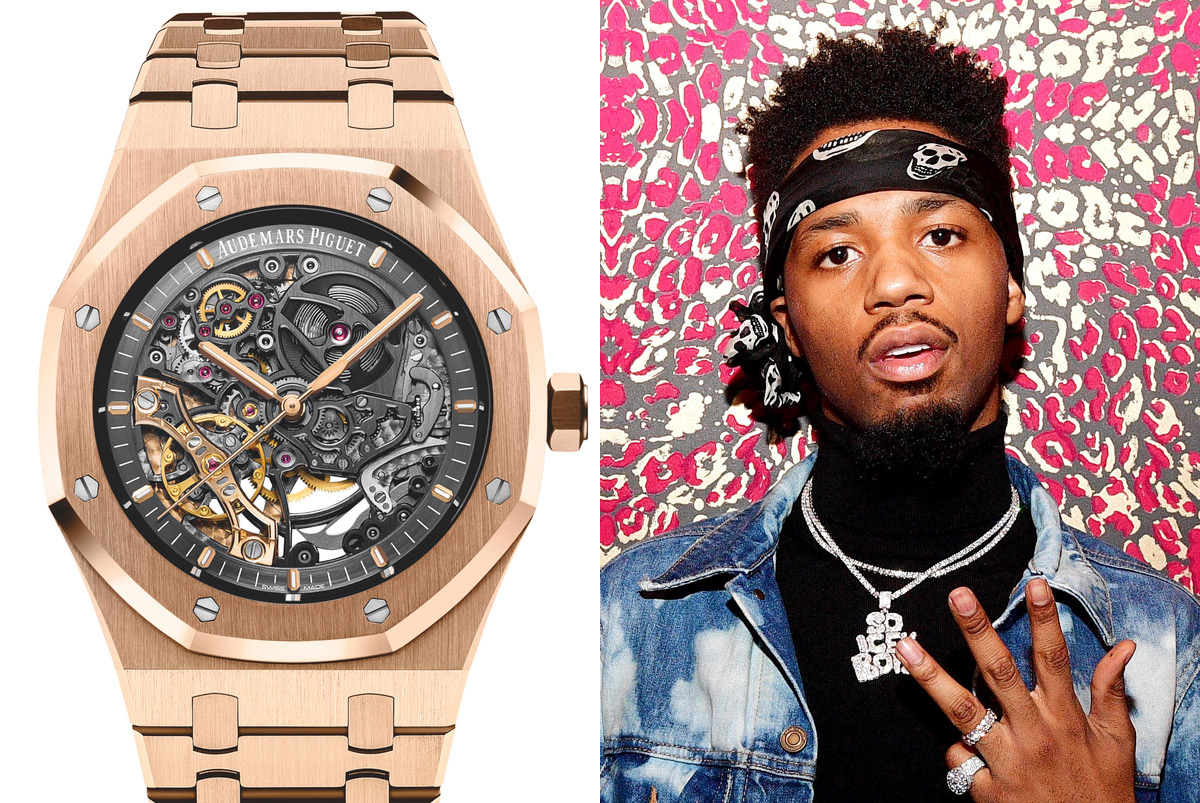 “Going to the jeweller, bust the AP, yeah (bust it)
Slide on the water like a jet-ski, yeah (woo, slide)”

The Without Warning album features rap’s current favourite trio Migos and contains more watch references that I’ve cared to count. As well as being what the youth today would call fire, this song references not one but two watch brands with AP and Patek both getting a shout out. As well as the two watch giants they also manage to plug Bentley, Lamborghini, Balenciaga, Valentino and Rolls Royce. 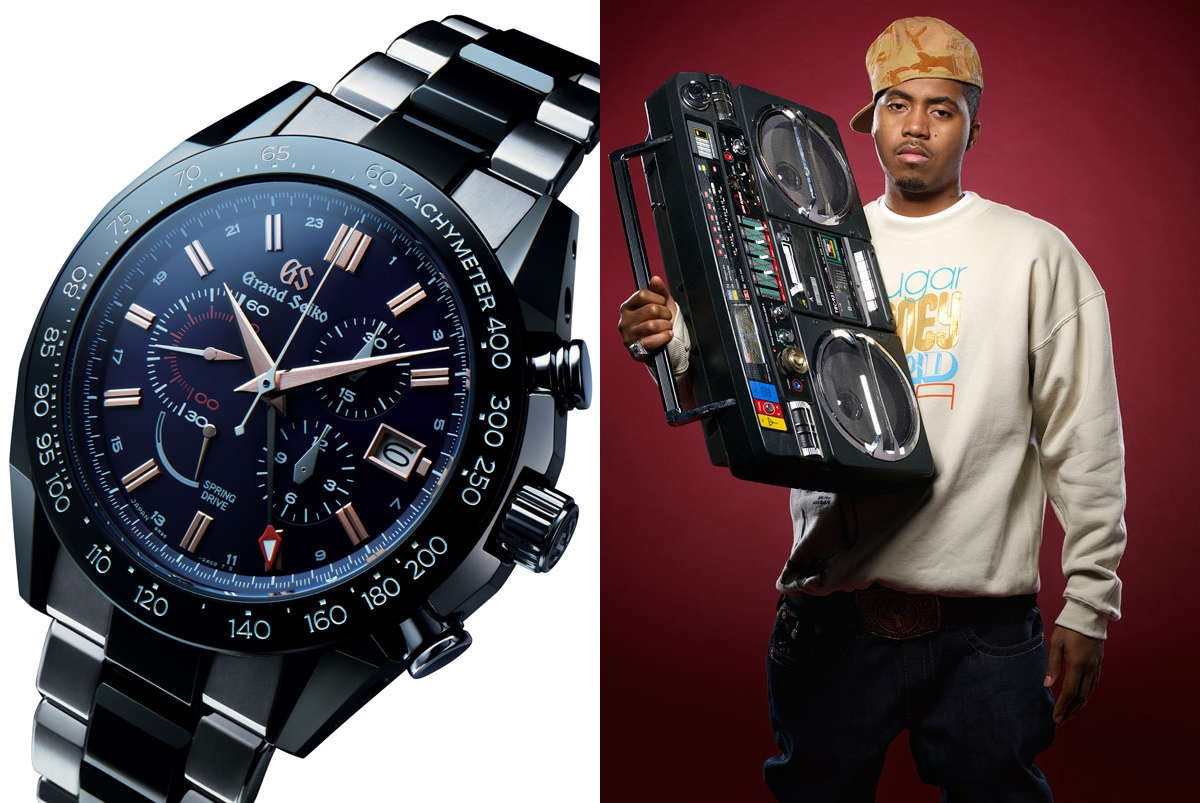 “Came along way from blastin/ techs on blocks
Went from Seiko to Rolex, ownin acres”

In one of the more old school hip-hop songs on the list, Nas raps about two of perhaps the biggest watch brands in the game. Unfortunately for Nas he doesn’t know that Seiko are every watch nerd’s favourite underdog, producing brilliantly reliable watches with an understated aesthetic. That being said, most of us would choose a Rolex over a Seiko, especially if you’re a b-boy blowhard. 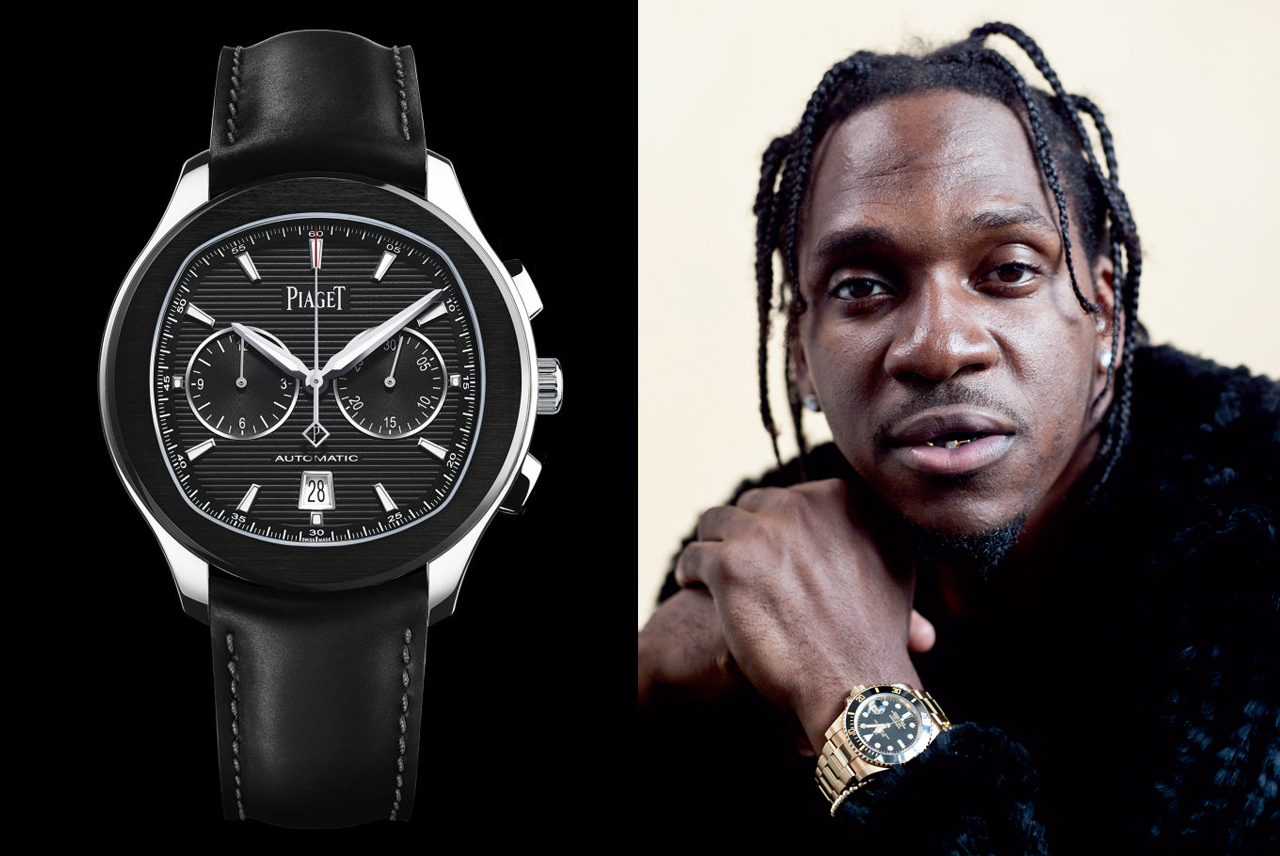 “My mind wanders on a PJ, my momma brought up in the PJs
In the club sippin’ P&J on the same arm as my Piaget (Woo!)”

I’m going to admit it: I despise this song. It’s a stretch to even call it hip hop. But I had to put it in the list, not because Pusha T manages to rhyme essentially the same word four times, but because he actually manages to give a shout out to the lesser rapped about watch brand Piaget whilst also plugging a lesser known Champagne brand, Perrier Jouet. Piaget deserves more rappers’ attention. After all they make the thinnest automatic watches in the world.