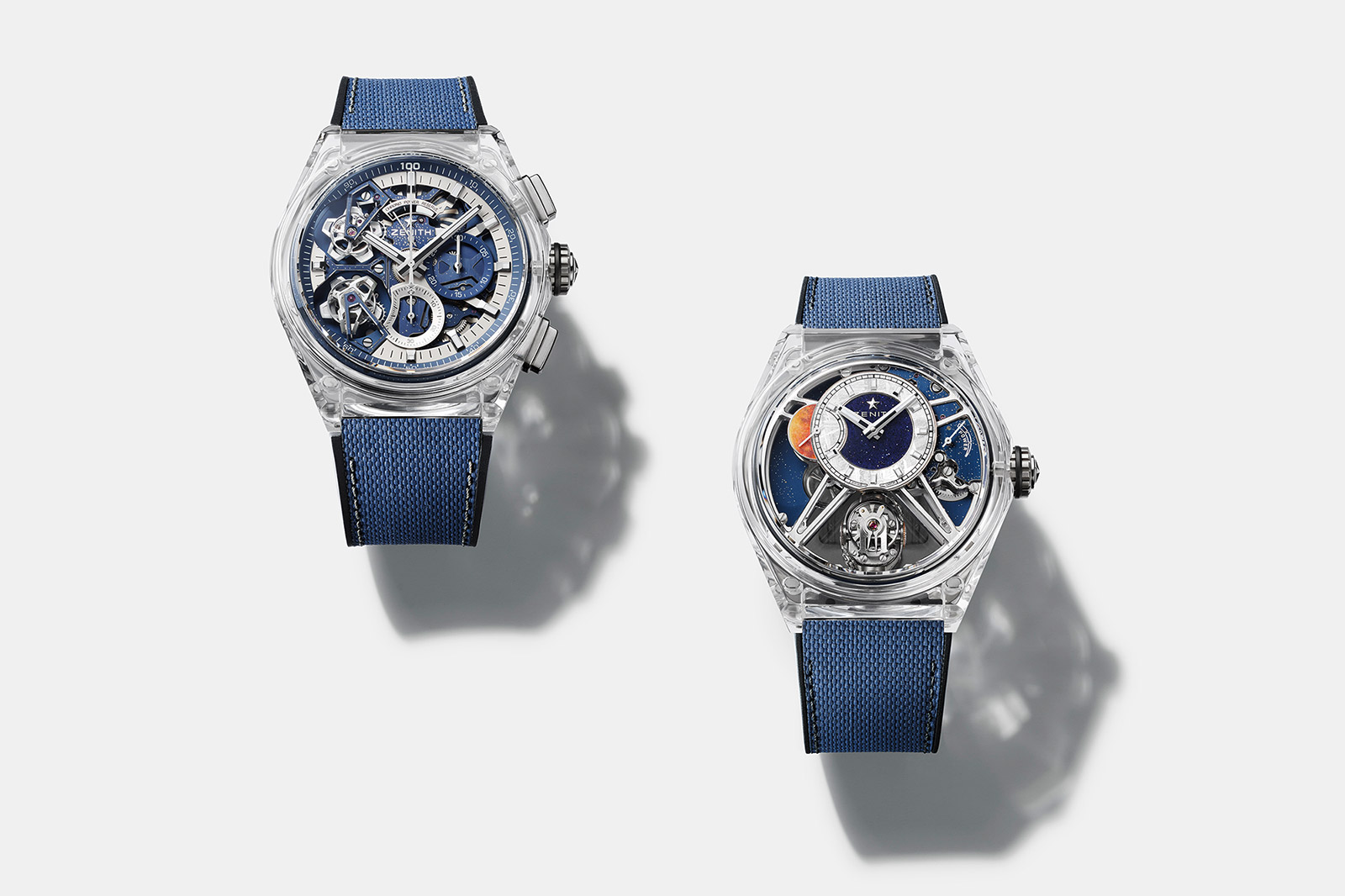 After Zenith’s DEFY Extreme Desert we thought it was Earth-bound inspiration that would dominate their upcoming releases. However, a duo of completely reimagined DEFYs shows they’re still reaching for the stars with stellar-themed watches in new sapphire cases. These are the DEFY Zero-G Sapphire and DEFY Double Tourbillon Sapphire.

Both of these watches already exist in the Zenith DEFY collection, however the makeover is so dramatic that they might as well be completely new. Off the bat, they have 46mm transparent sapphire cases, which is a first for the collection and the manufacture. The material allows you to view the internal mechanisms of the watches from every angle, emphasising the technical proficiency of what are two of the most extreme examples of haute horology Zenith produce.

The sapphire also makes the skeletonised movements appear to float in zero gravity. An effect which enhanced by the blue PVD coated elements with engrave star decorations and carefully chamfered rhodium edges that create the scene of the night sky. These aspects of the redesign, the sapphire cases and the decoration, are the same across both watches. However, they also have individual design features that make them distinct. 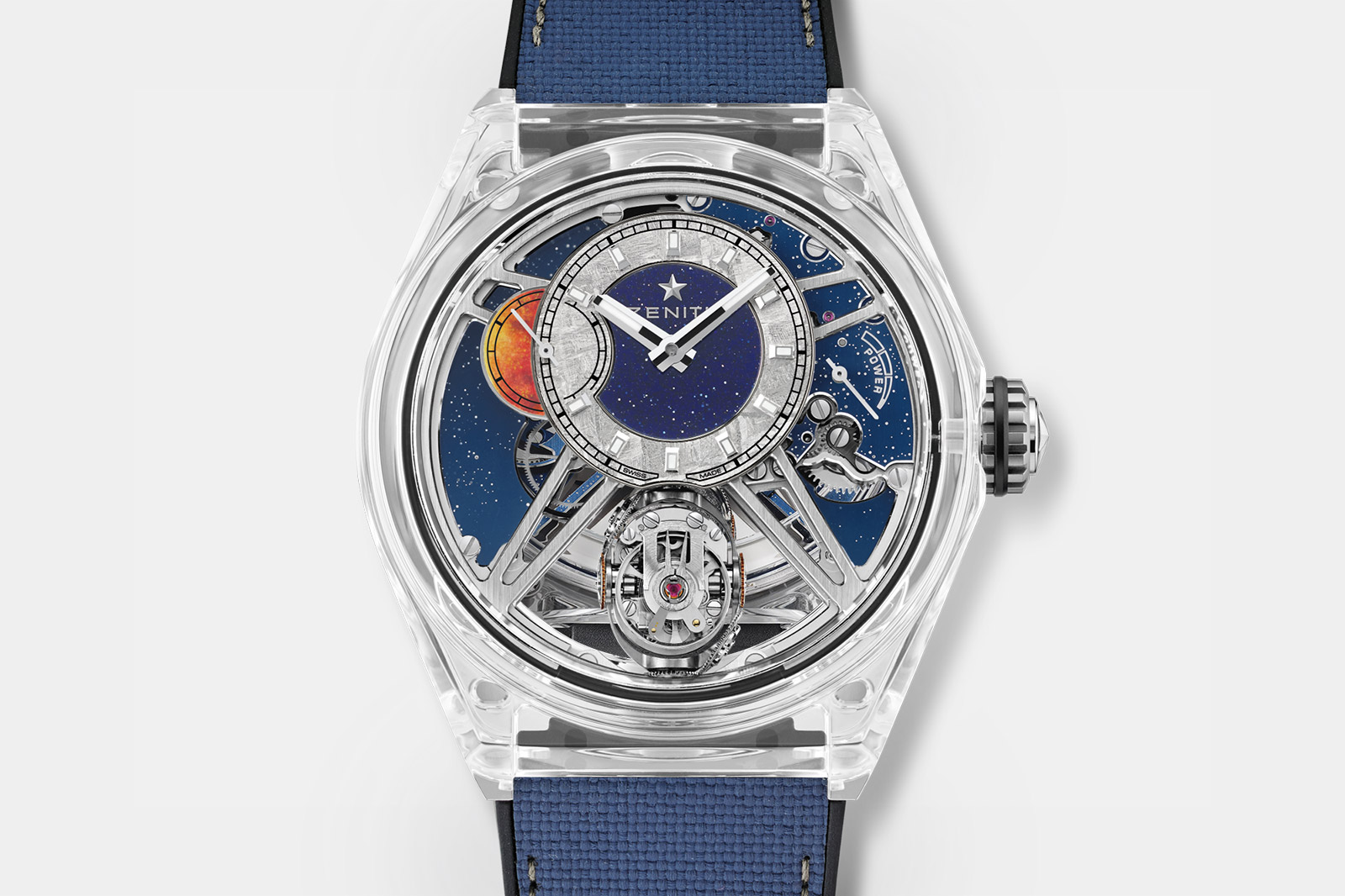 Starting with the DEFY Zero-G, the small seconds subdial which overlaps the main off-centre dial at 10 o’clock depicts an image of Mars, our solar system neighbour. Similarly, the bottom of the gravity control mechanism, which rotates on a gimbal to remain flat regardless of the watch’s rotation, has been given a crater pattern like the surface of the moon. 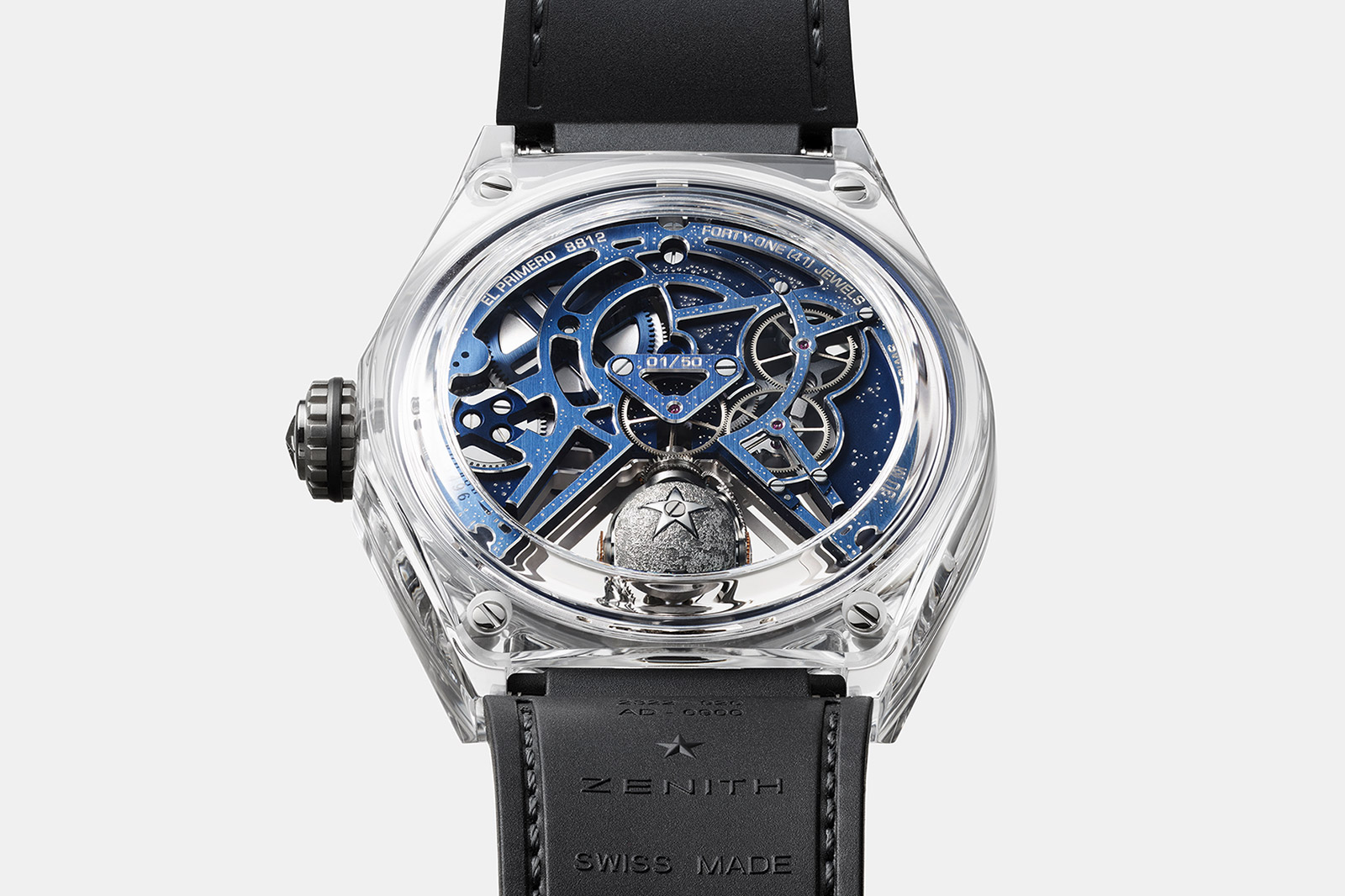 Amusingly, because the regulator has been designed to remain flat at all times, you have to raise the watch over your head to appreciate the pattern, as if you were looking up at the moon. It’s stunning and begs the question why the watch wasn’t always produced this way. 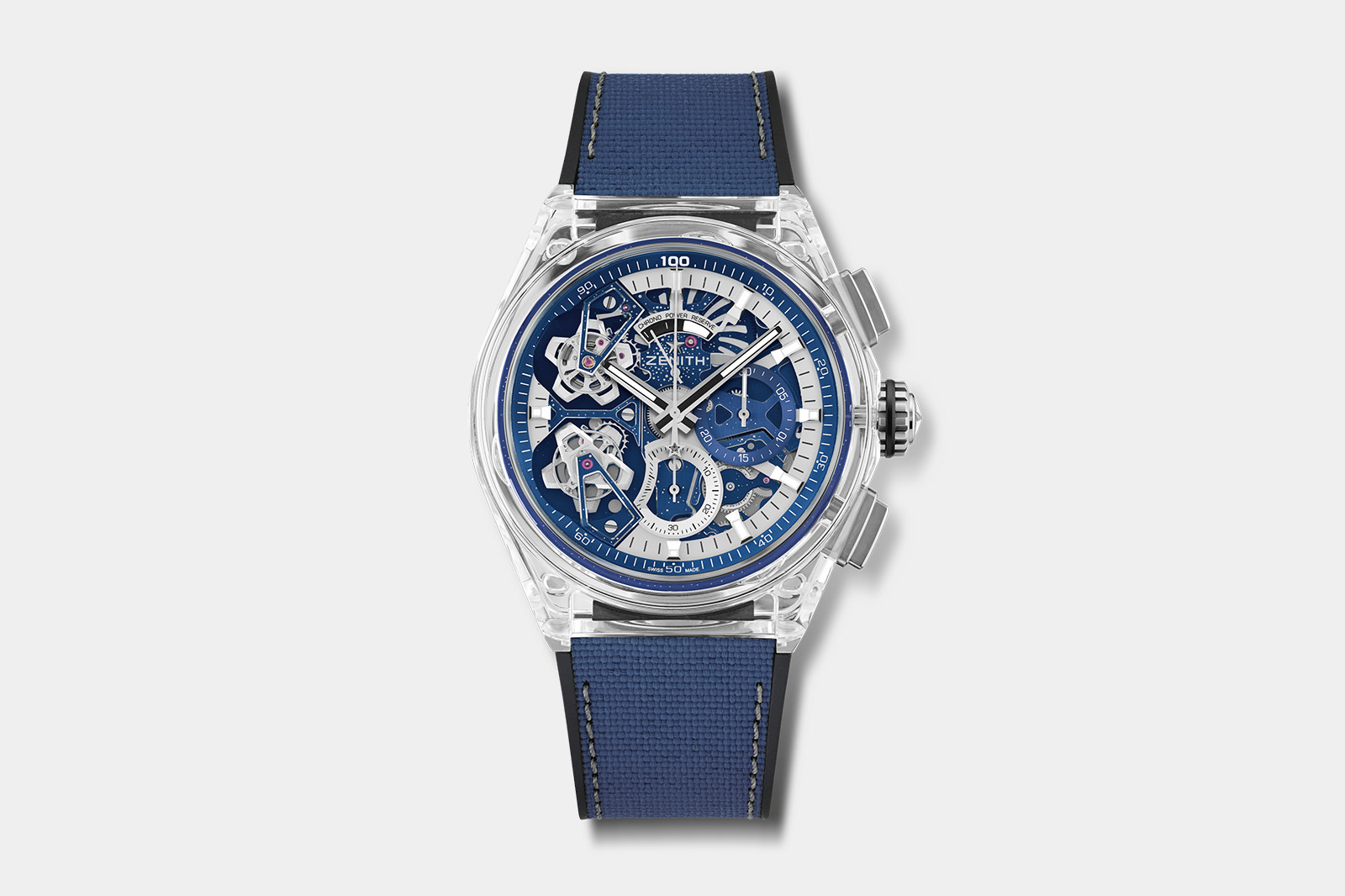 The DEFY Double Tourbillon has less overall embellishment than the Zero-G but is spectacular all the same. Instead of depicting celestial bodies, the display is dominated by the double tourbillons and chronograph counters that are the watch’s signature. If you happened to produce one of the fastest tourbillon chronographs around, you’d want to highlight it too. The starry night pattern feels like an interesting colourway in this instance, rather than altering the DNA of the watch in a meaningful way. However, being able to see the high end El Primero 1/100th chronograph movement from any angle thanks to the new transparent case is great. 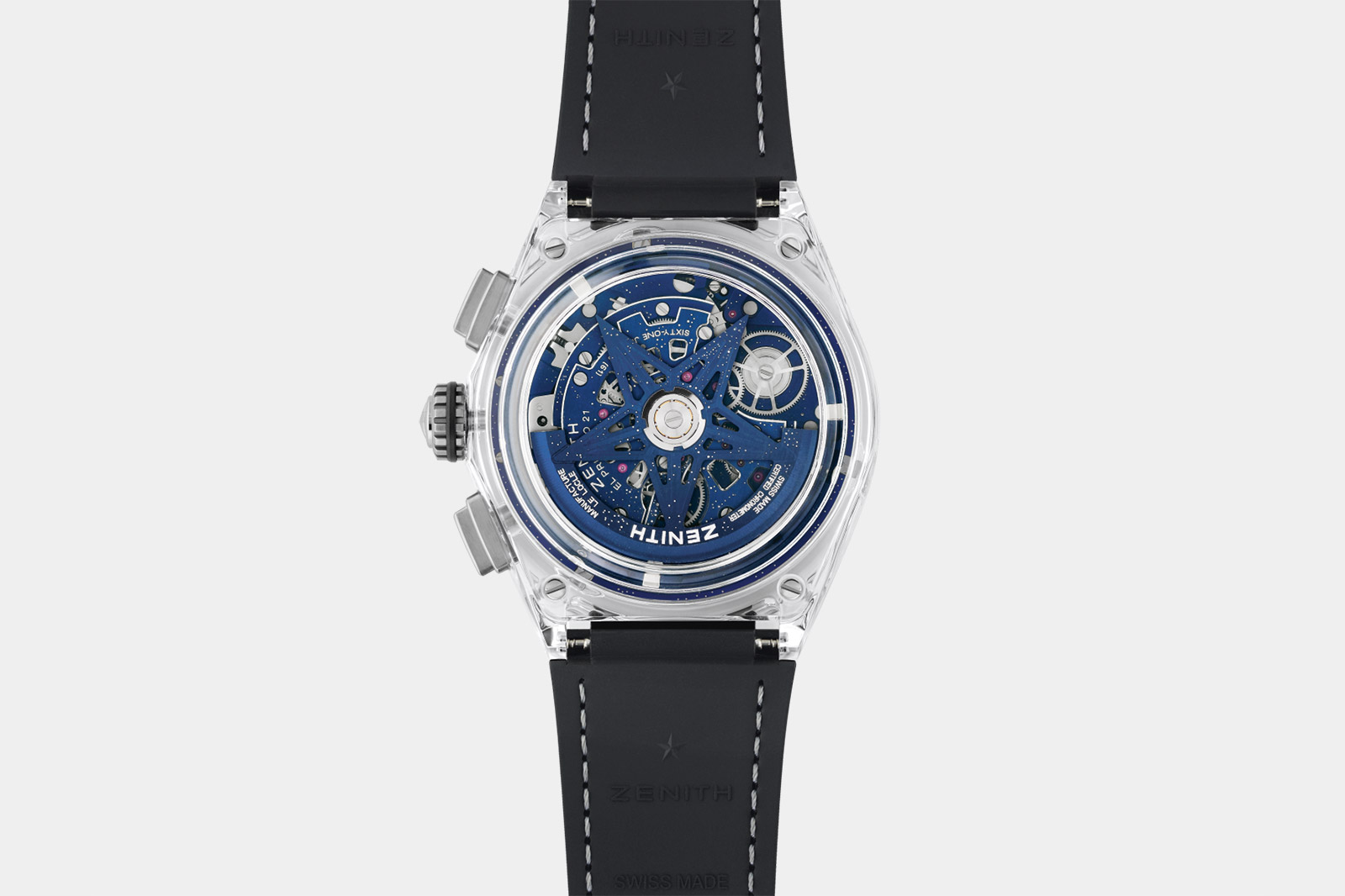 As a pair they work really well together, although we mere mortals won’t be able to get either of them as there are only 10 of each being produced. Also, each watch comes with an invitation to go on a zero-g flight in February 2022 for the 20 lucky owners. All of which is to say they’re not exactly accessible, with the Zero-G priced at £133,900 and the Double Tourbillon at £149,400. Compared to the regular versions of the watches that’s an increase of £50,000 and £25,000 respectively. I might be tempted by a regular Double Tourbillon over the new one but the Defy Zero-G Sapphire is definitively the new benchmark for that timepiece. Urwerk change up the UR-100V with a full titanium construction and a new metal bracelet to create...