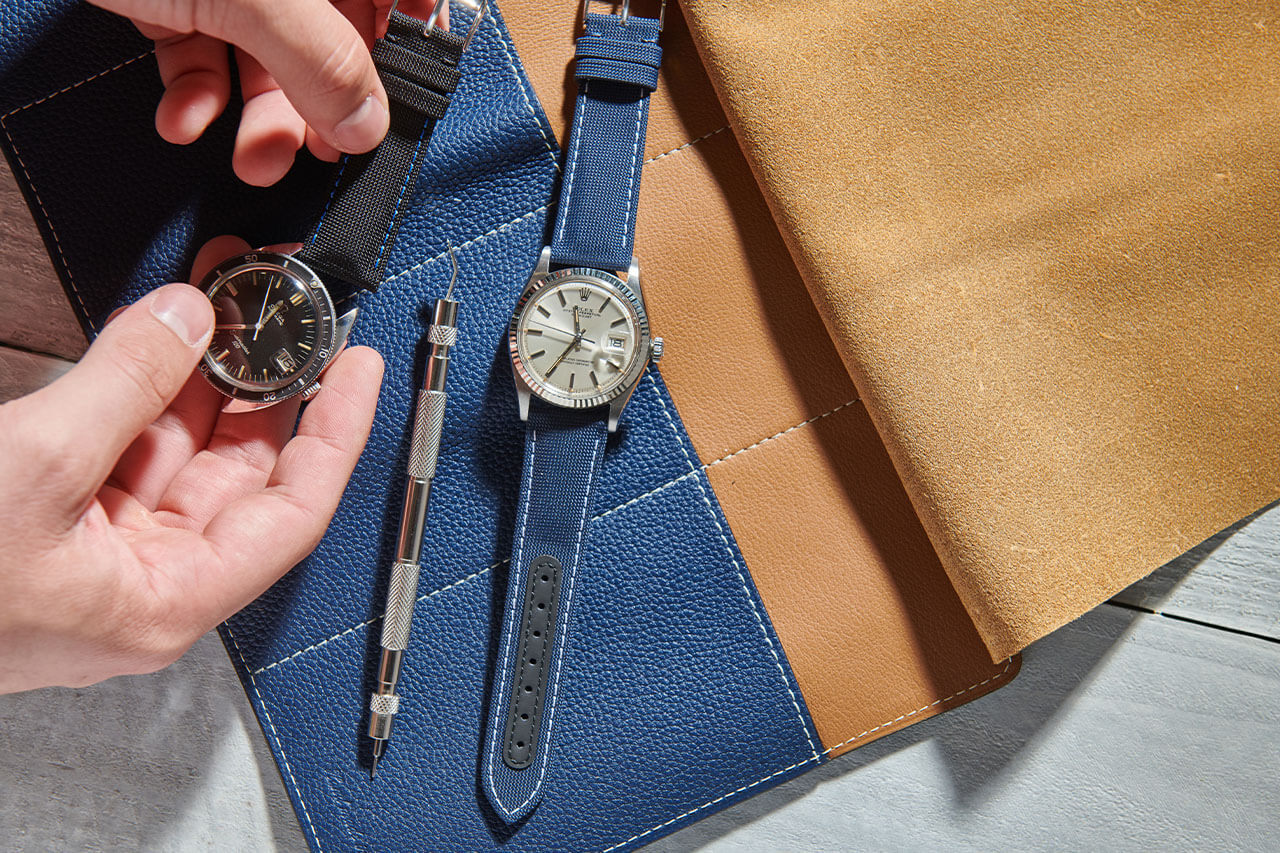 Is a strap the single most underappreciated part of a watch? Well, we wouldn’t lead into an article like that if it weren’t. You can debate what kind of watch face suits what kind of situation until you’re blue in yours, but a few moments fiddling with the spring bars and you can transform any type of timepiece.

It’s a travesty then that most of us stick with what we’re given. A watch comes with a specific strap and it stays on that strap until the day you get bored of it. Sure, watchmakers themselves have been making a concerted effort to offer more options with funky colourways, contrast stitching or a spare with your purchase, but when it comes to really expressing your horological tastes, you need to think outside of the watchbox. 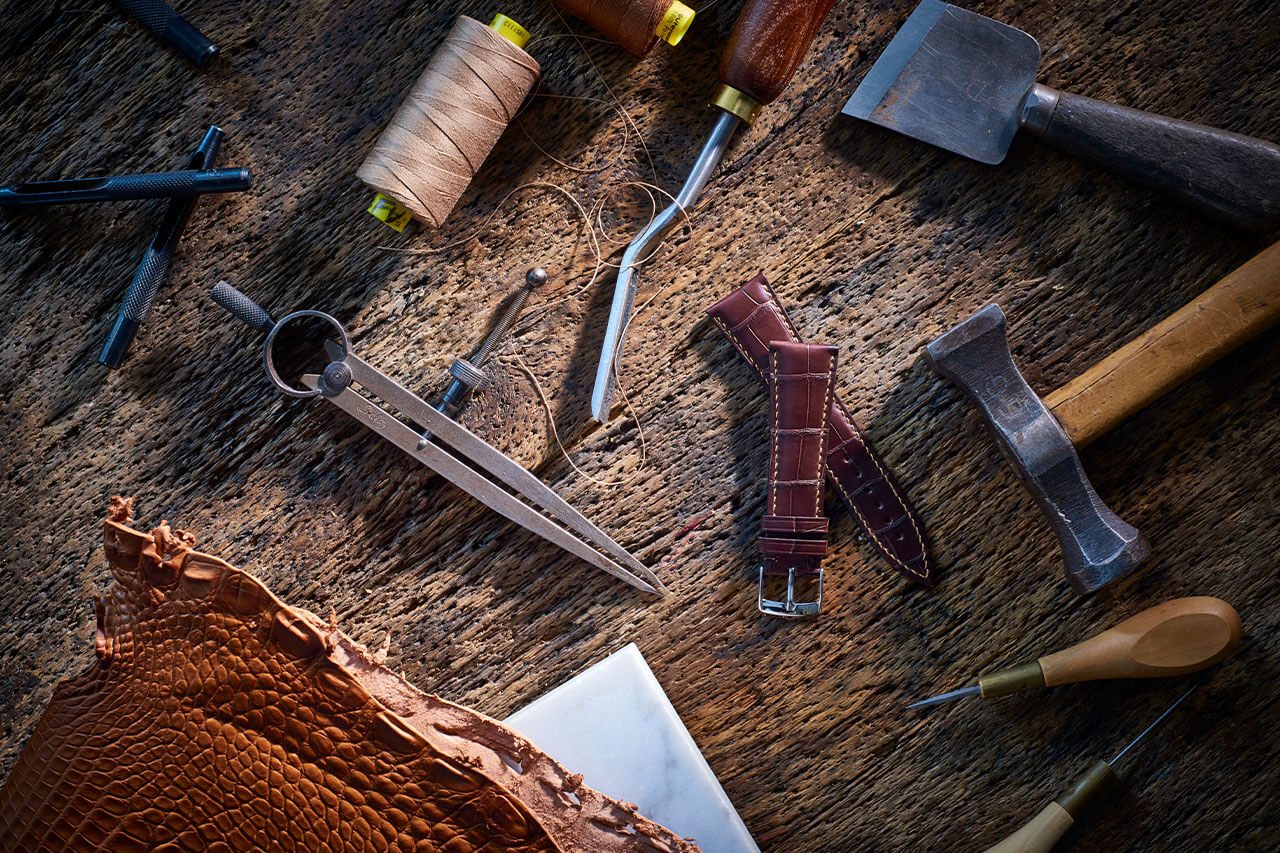 That’s why there are today so many strap specialists offering their own unique twists on what is, in essence, a practical necessity, ranging from colourful, fun and cheap to more classical luxurious leathers. Then there’s Jean Rousseau, who make some of the finest straps in the world.

For 67 years Jean Rousseau has been one of the finest artisan leatherworkers in the world with a distinctly French Savoir-faire. It’s an ongoing heritage of expertise that they’ve channelled into transforming the humble watch strap into something altogether more exceptional. 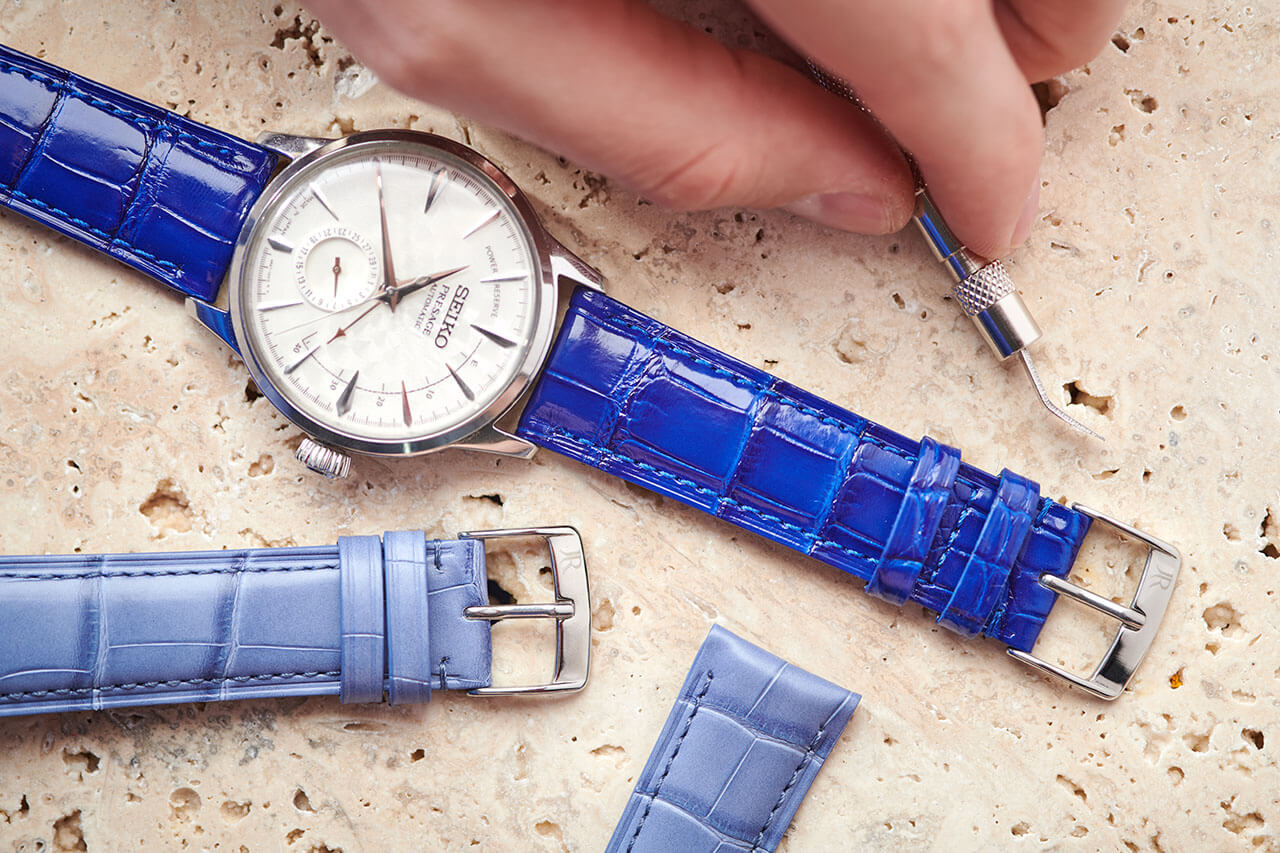 For us, it’s those straps that have put Jean Rousseau on the map. Earlier we mentioned the two general poles of strap making, fun and colourful at one end, classically exquisite at the other. Well, Jean Rousseau combines the two together like no-one else. Just look at their take on good ol’ blue.

Like watch dials, blue straps are almost as standard as black or brown. They’re everywhere. Yet while most you’ll find are the same dark shade, not so here. Navy? Try electric blue alligator or shiny lizard in a shade of lapis. Sure, there’s your classic darker colours in simple calfskin leather, but there’s also sky-blue alligator with a luminescent finish between the scales. And yes, it is as spectacular as it sounds. 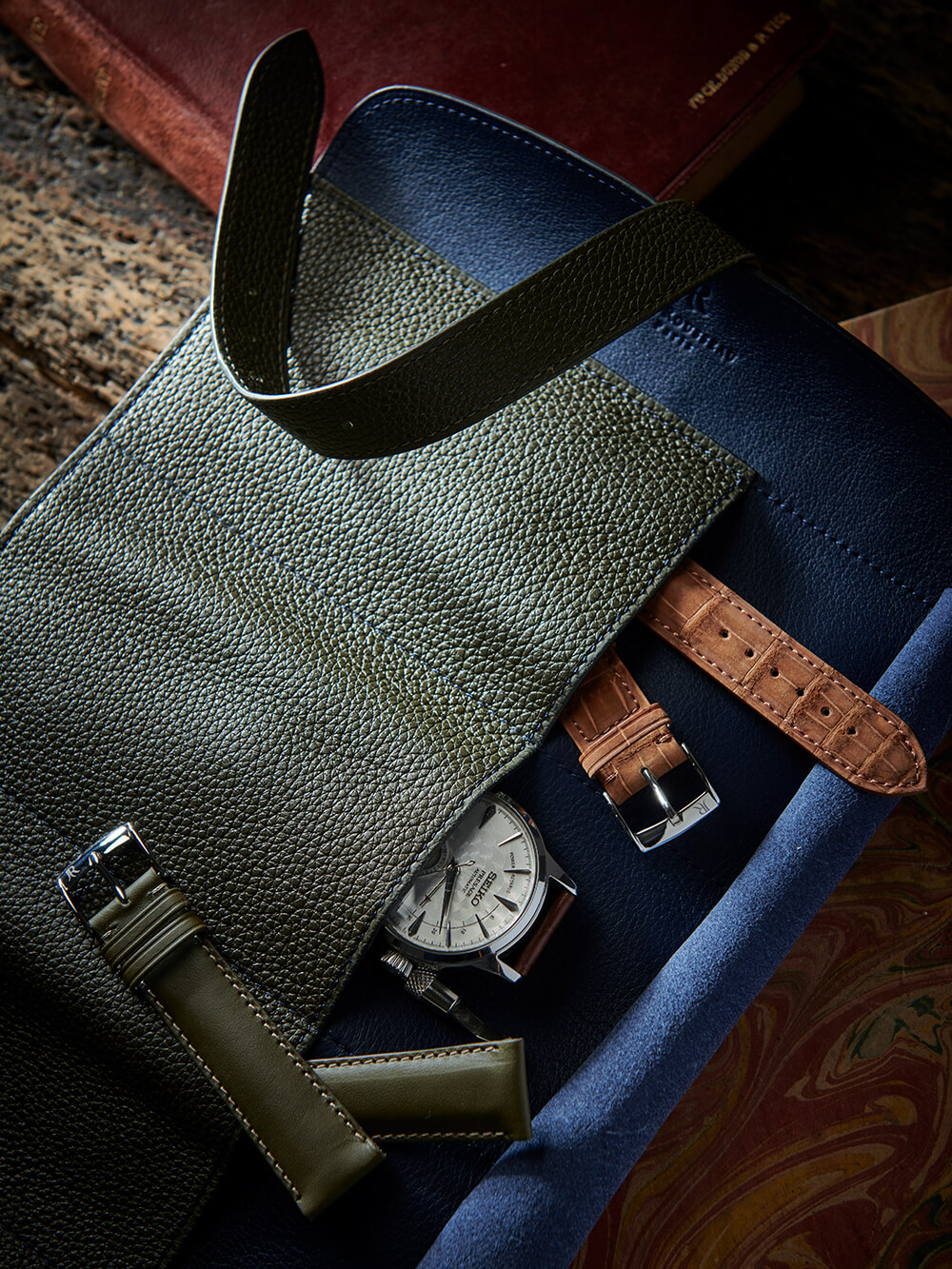 If none of that strikes your horological fancy, Jean Rousseau also offers a complete bespoke strap service, which offers an unprecedented level of personalisation. And yes, that includes custom colours thanks to the Maison’s integrated tannery, the secret behind all their stunning in-house colours. If you can’t make it to a Jean Rousseau atelier, they also offer the service in Harrods, which is a ringing endorsement if ever there was one.

Incredible looking though they are, what really separates Jean Rousseau’s straps from classic black to sunset orange is their quality. For the French Maison, playfulness and luxury aren’t polar opposites but close friends and the same attention to detail and quality of leather, exotic or otherwise, is consistent across the board. 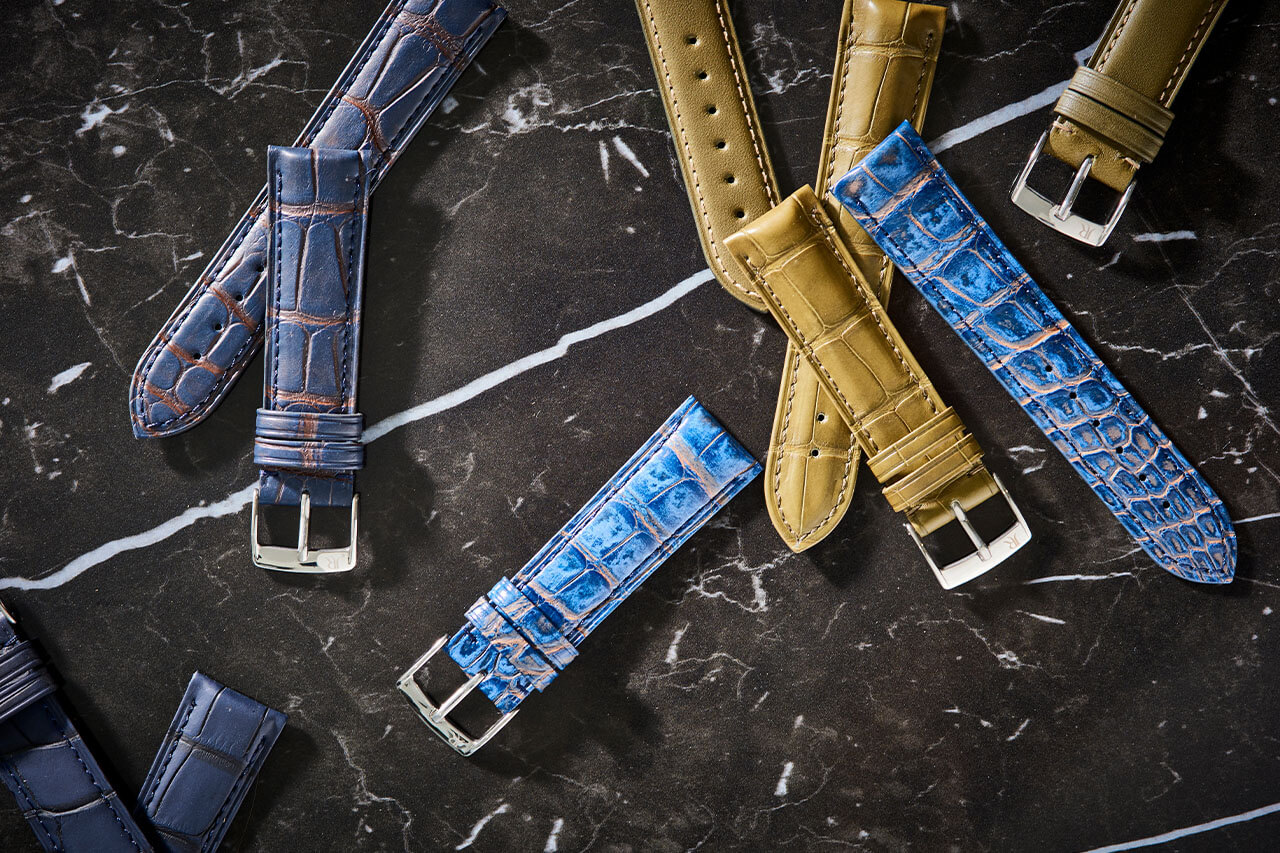 That consistency is one of the main reasons Jean Rousseau are behind the straps of some serious horological heavyweights. Though we’re sworn to secrecy on precisely which watches come equipped with their straps, it almost goes without saying that they’re pretty exclusive timepieces.

So, if you find yourself looking at your watch, wishing it had just that splash more personality and a tidal wave more quality, then look no further than Jean Rousseau. Not only will there without fail be a design you become obsessed with, but you can rest assured that it lives up to the prestige of your timepiece.

Just be careful it doesn’t eclipse it.