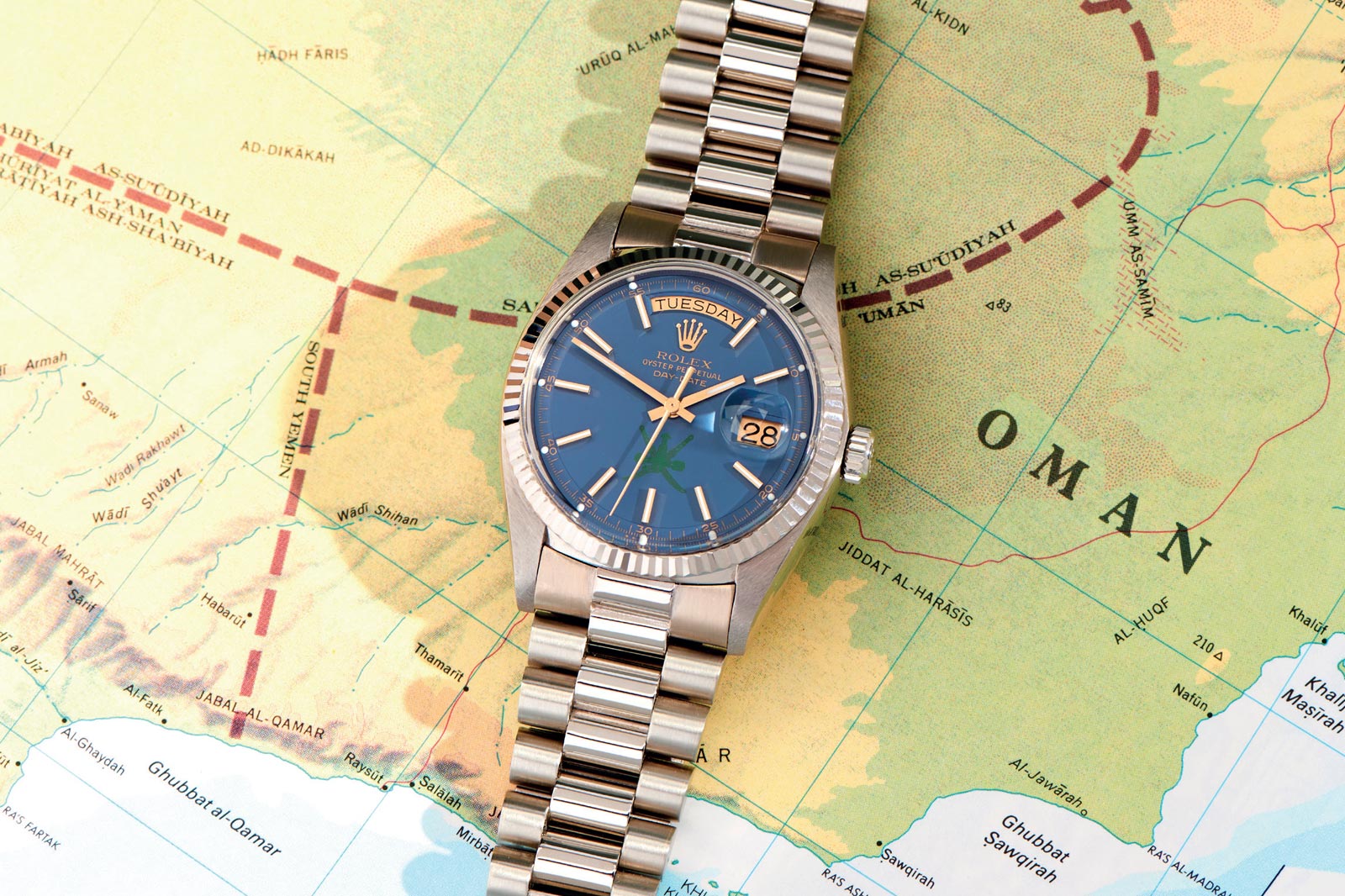 The last decade has seen the horological hunt reach fever pitch. Going from a niche sport to Olympic level, the pre-owned market has been red hot with collectors looking to bag that oddball, off-the-beaten-track pick-up that nobody will have ever seen in the wild. Here we have just that – a watch that many would be forgiven for confusing with ‘just another day-date’.

Originally launched in 1956, the Day-Date, with its famous ‘President’ bracelet, was the first wristwatch to feature a date and fully spelled-out day of the week indication on its dial. The sporty elegance of the Day-Date has been enduringly popular for decades as the dressier end of the Rolex catalogue. 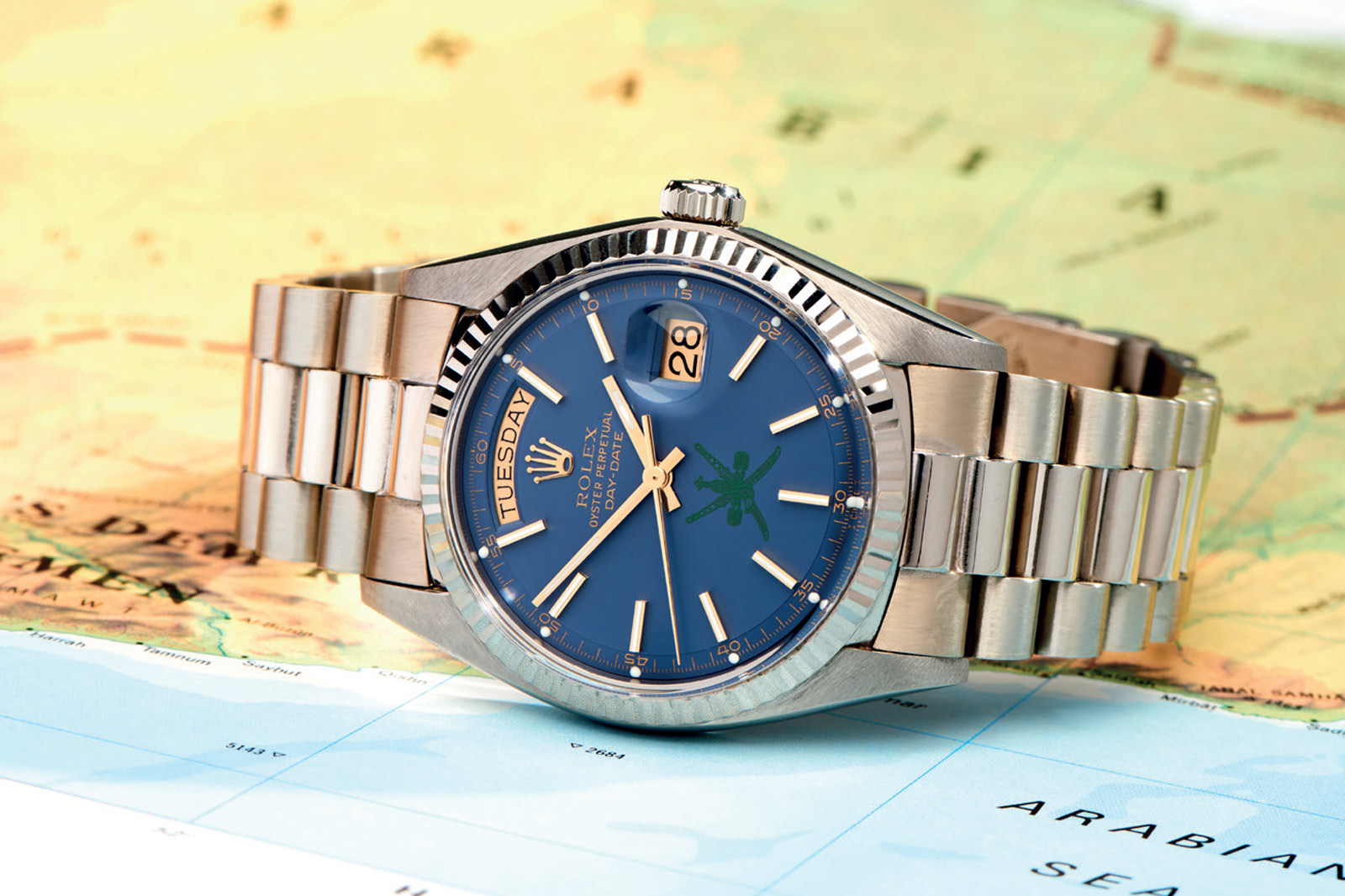 This example however, bearing the Sultanate of Oman’s khanjar (traditional Omani dagger) and crossed swords emblem or the signature (usually seen in red) is something extra special.

As the nation was being established, the late Sultan of Oman, Qaboos bin Said al Said developed relationships with Rolex through John Asprey, enabled by his close friend (and one of the richest men in England at the time) Brigadier Sir James Timothy Whittington Landon. It is believed that the inspiration for placing the Khanjar on the dial of certain watches came from Asprey himself. The Qaboos was drawn to the majesty and significance of the Royal warrants held by Asprey and wanted a similar crest to add credibility to his reign.

Increasing demand for watches with the Omani emblem is understandable given the rarity of most of these watches (exact figures of production are unknown). Combined with the fact that they had often been presented to their first owners in the 1970s by Sultan Qaboos in person as a token of gratitude for services rendered, they do have incredible provenance. 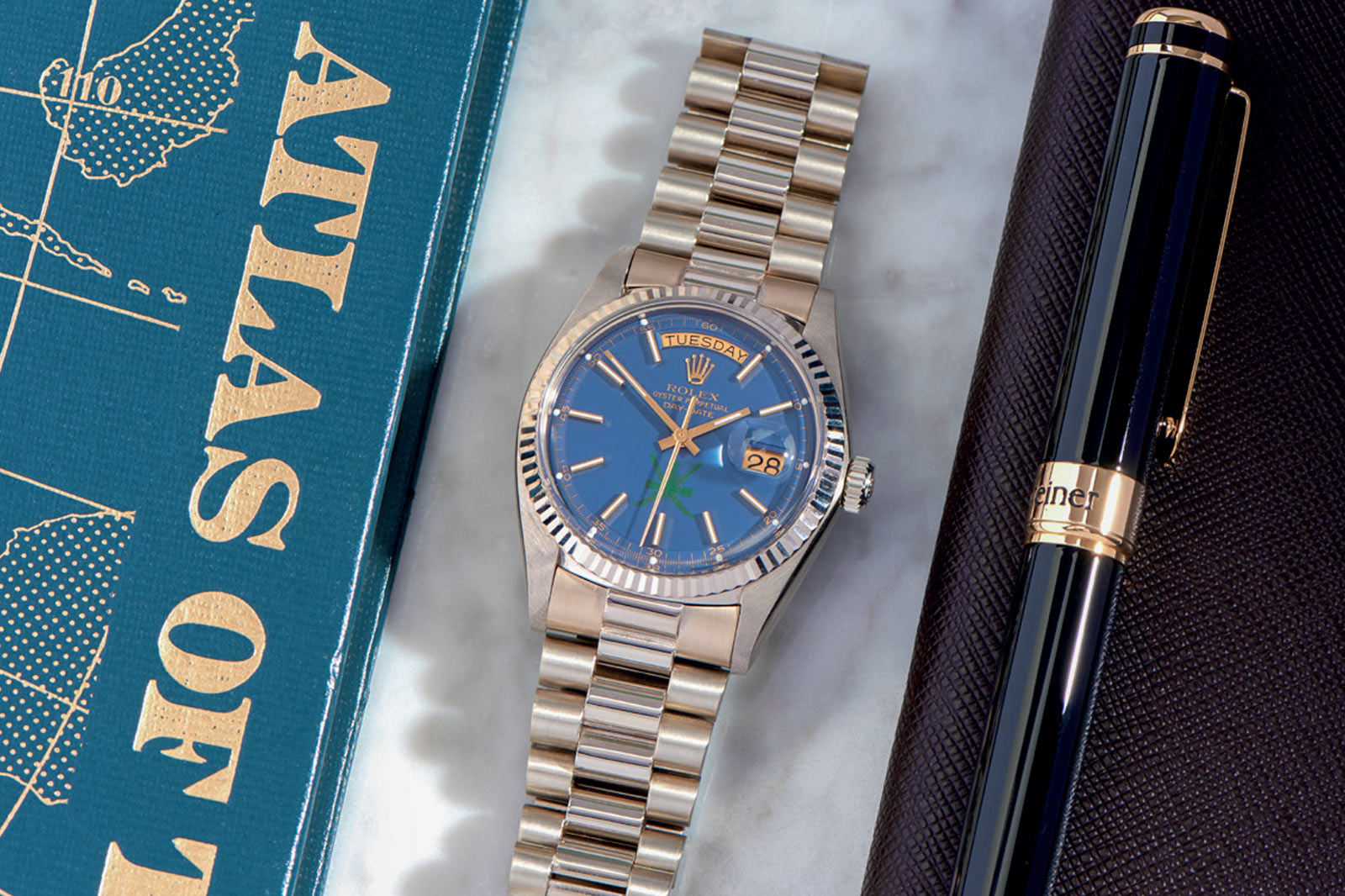 This particular watch is a Rolex Day-Date 1803 from 1974 in white gold with stunning patinated blue dial and gold baton hour markers, gold hands and a lime-green Khanjar emblem above the six o’clock position on the dial. This combination of white gold and yellow gold markers/hands is rather unusual and most likely supplied at a special request.

We’ve not seen another version with this combination and the emblem is very subtle in green with the blue dial unlike other more blatant Day- Date versions out there. It’s not only a watch you could wear in any setting – but an incredible time capsule of an era we won’t see again. We love it and we think you may too.

As a self-confessed watch fanatic, Joe’s personal interests lie in complications from Patek Philippe, F.P. Journe, Lange & Söhne and AP - his favourite being a 39mm AP Royal Oak Perpetual Calendar with a rare Tuscan dial. He also happens to be co-founder of preowned luxury specialist Xupes. A look at the history and development of one of the few Rolexes that has disappeared into history...