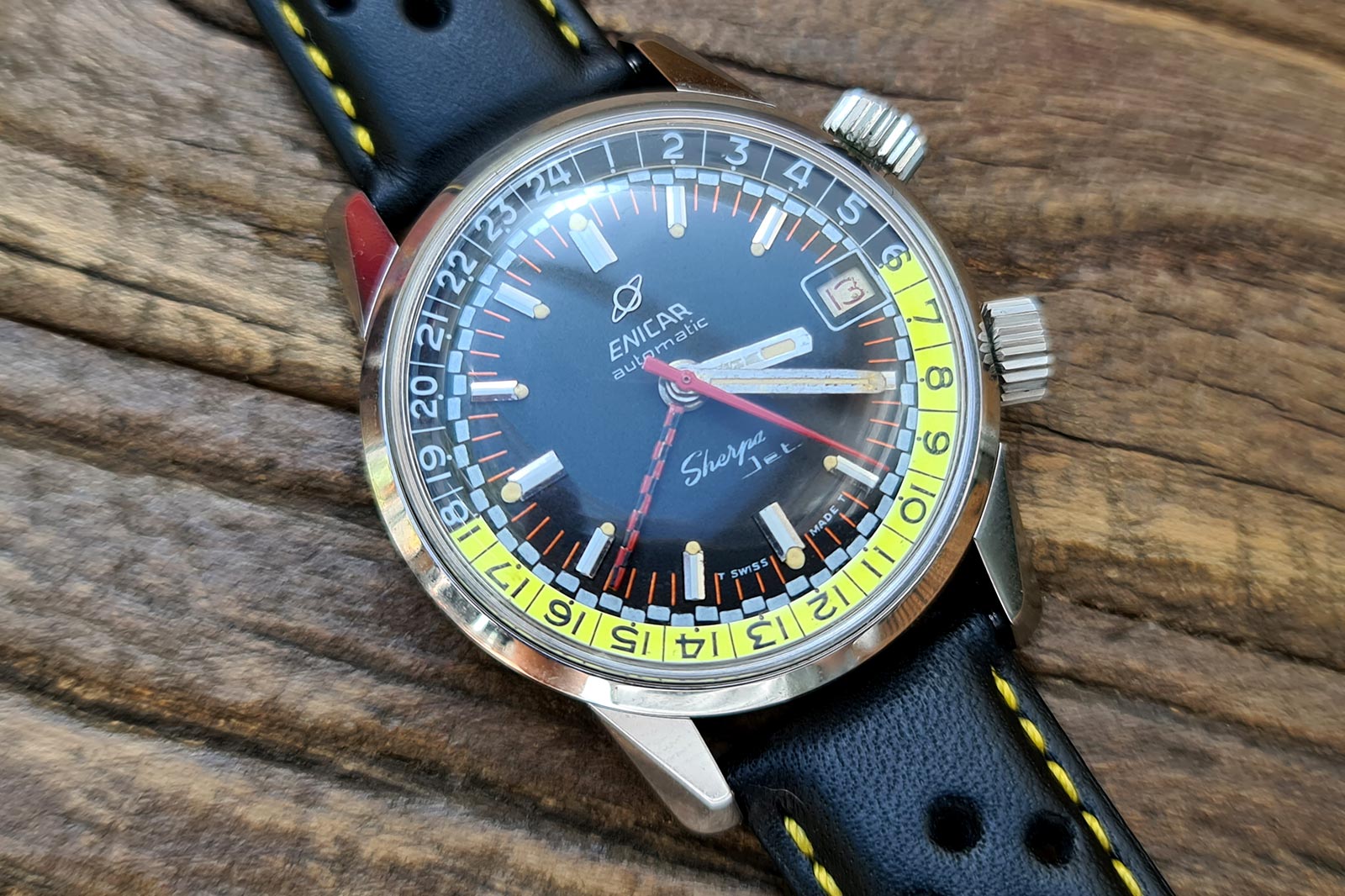 The quartz crisis was a dark time for watchmaking. When Seiko ushered in the future of timekeeping, they did so with the bells tolling for many a traditional, mechanical watch brand, now outdated, defunct, better left in the history books.

Obviously, that didn’t happen and thank God for that. I’d hate to fill these pages with discourse on comparable battery lives. But the quartz crisis did have its fair share of casualties, would be a perfect fit for our adventure issue: Enicar. 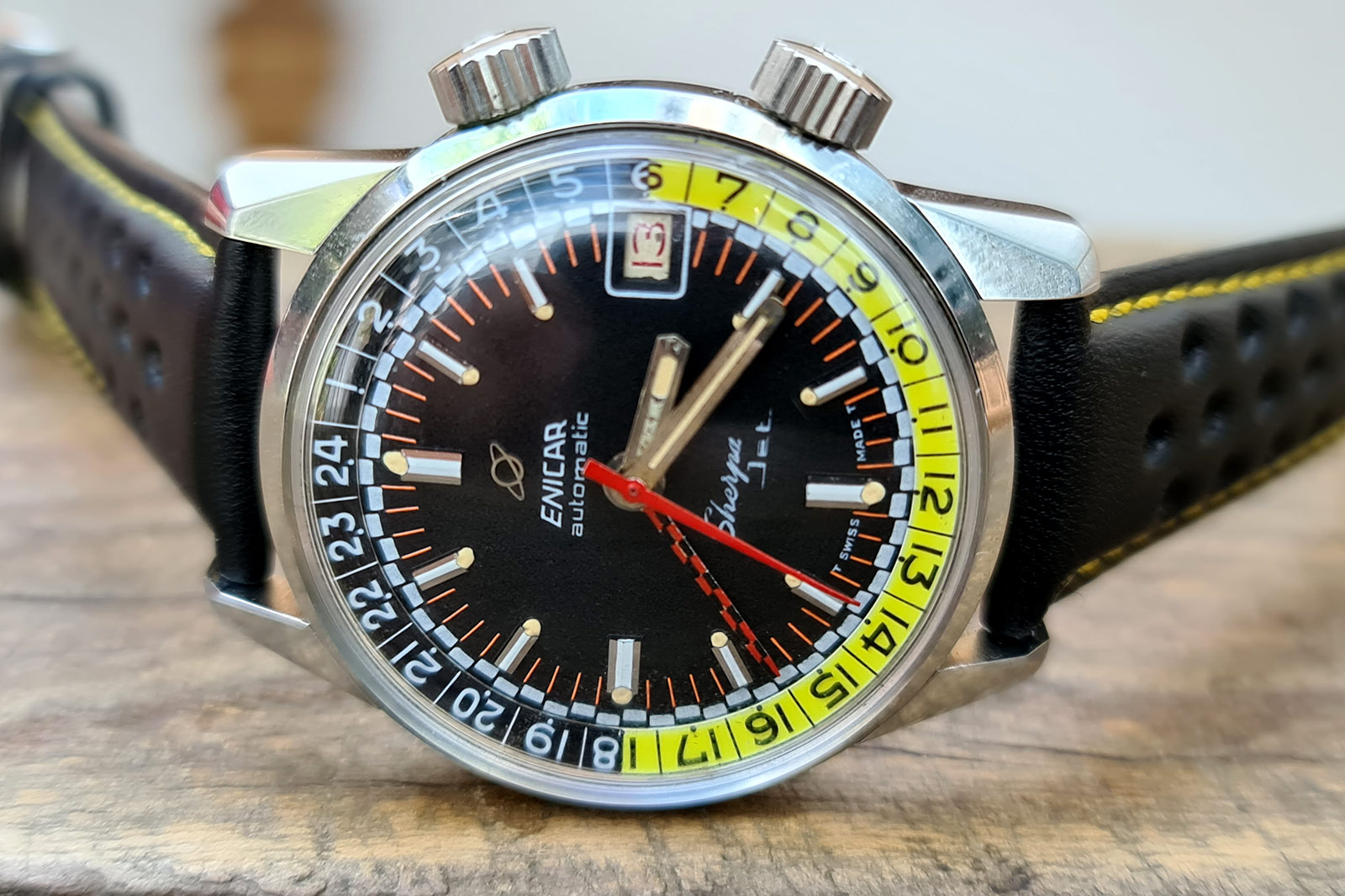 That’s not entirely true; Enicar as a brand does still exist and it’s still producing plenty of watches. They’re… fine? There’s nothing inherently wrong with the current embodiment of the Enicar name, but it’s a world away what they could have been before. Sure, they may produce ‘a range of over 300 flawless timepieces’ but before they were brought low by the inevitability of progress, they were all about one, dubbed the Sherpa.

But first, a bit of background.

The first Enicar watch dates back to 1913, though the watchmaker itself goes back a little further to 1854. The name comes from the backwards spelling of the founding Racine family, though let’s be fair, it suits the whole adventuring theme that they were gunning for in the 1950s, when they would equip adventurers around the world. 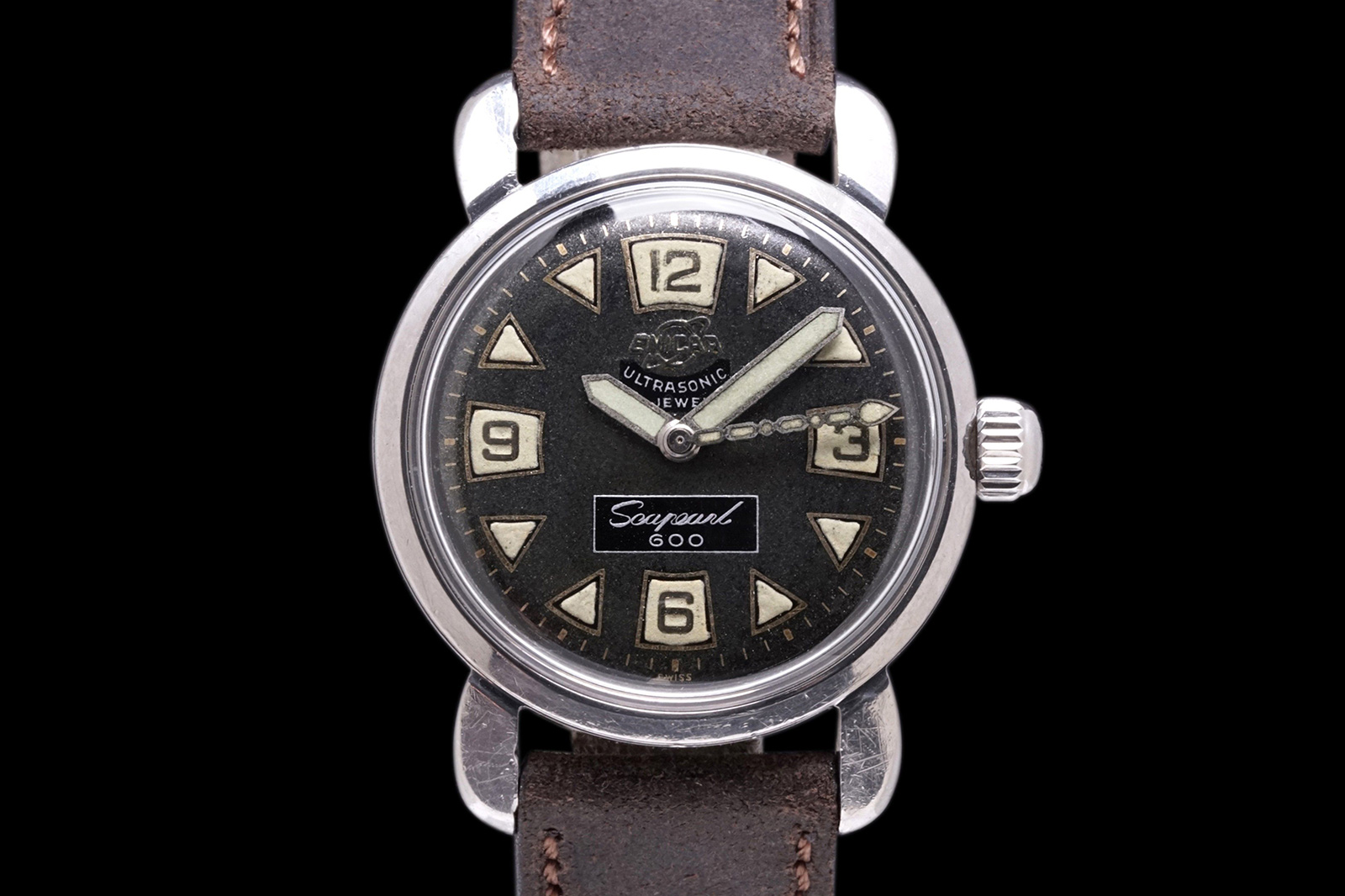 First off, the brand went for diving in the mid- 50s, most famously with the Seapearl 600. The model was released just as serious diving watches like the Submariner and Fifty Fathoms were becoming indispensable to the golden age of underwater exploration and was even in consideration for a US Navy commission alongside those two heavyweights.

Unfortunately, it didn’t get there for three reasons. First, despite its 600 feet water resistance, it had no rotating bezel for accurately timing how long you’d been under. Secondly, it has too much lume. Sure, lume was a necessity, but the Seapearl had big squares of the stuff painted on and gave off a bit too much radiation. Don’t worry if you want one now; it should have worn off a while ago. Thirdly, the navy didn’t really like the look of it, which is a travesty if ever I’ve heard one.

After that, Enicar turned their attention from the depths to the heights. That’s how the Enicar Seapearl ended up on the wrists of a Swiss climbing team that summited Everest in 1956. They were beaten to the punch by Rolex by just three years, still pretty remarkable for a watchmaker with far, far fewer resources than the Watch with the Crown. 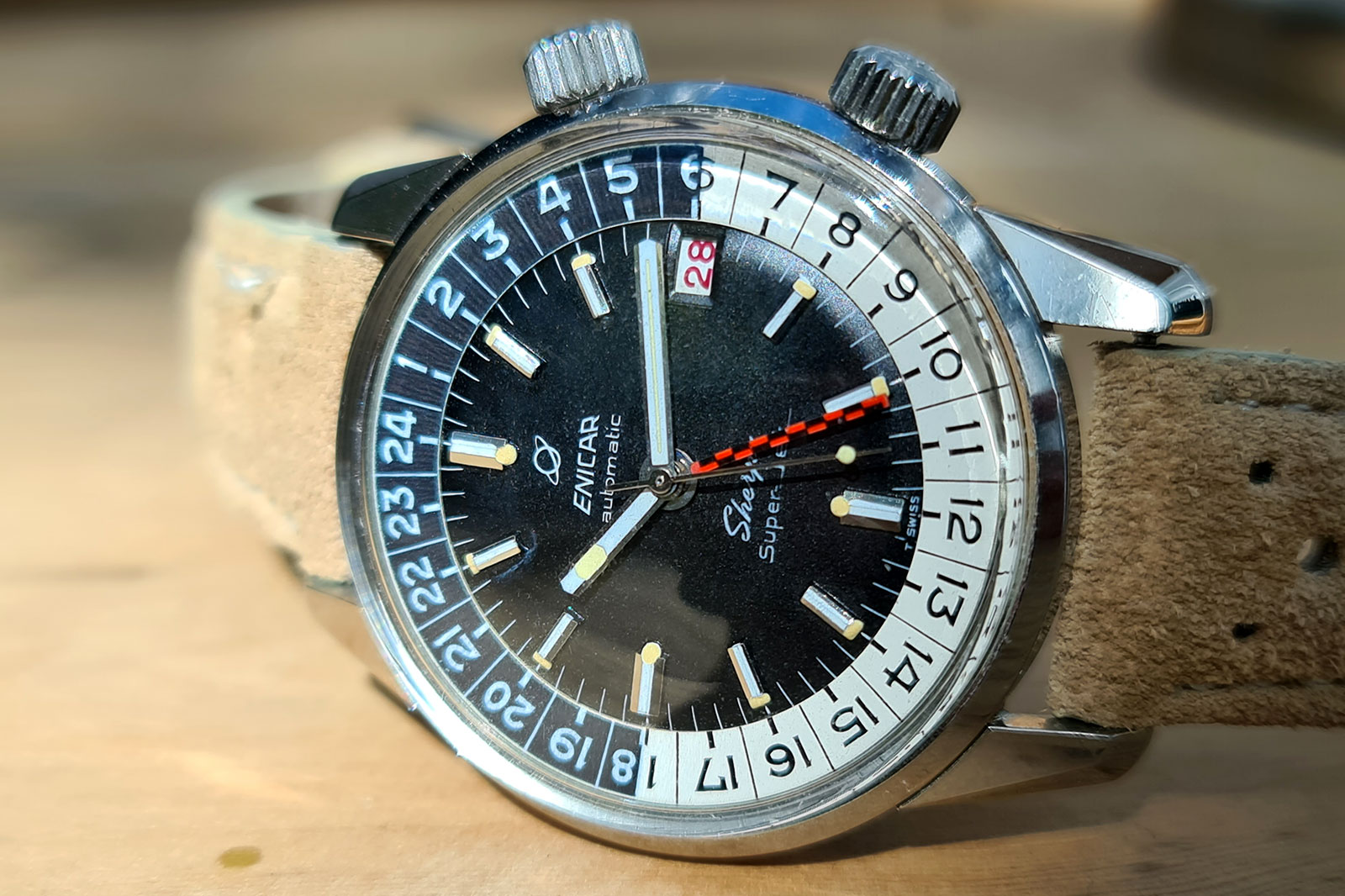 They were however quicker to seize on the branding opportunity the ascent to the Roof of the World offers and trademarked ‘Sherpa’ as a collection name.

Over the years, Enicar leaned heavily on the Sherpa name, producing their most varied collection of watches under the moniker. Other than the occasional really early models, which were a little dressier, the Sherpa became synonymous with the kind of funky layouts and colourways that the 1960s were all about. The 36mm Sherpa Jet for example (and larger 40mm Super Jet) offered a cool, sporty dual time traveller’s watch with the dual oversized crowns of a serious tool watch. Funky indexes, a genuinely interesting 24-hour scale and a decent size – for the time at least – make the Jet a perfect retro throwback today. 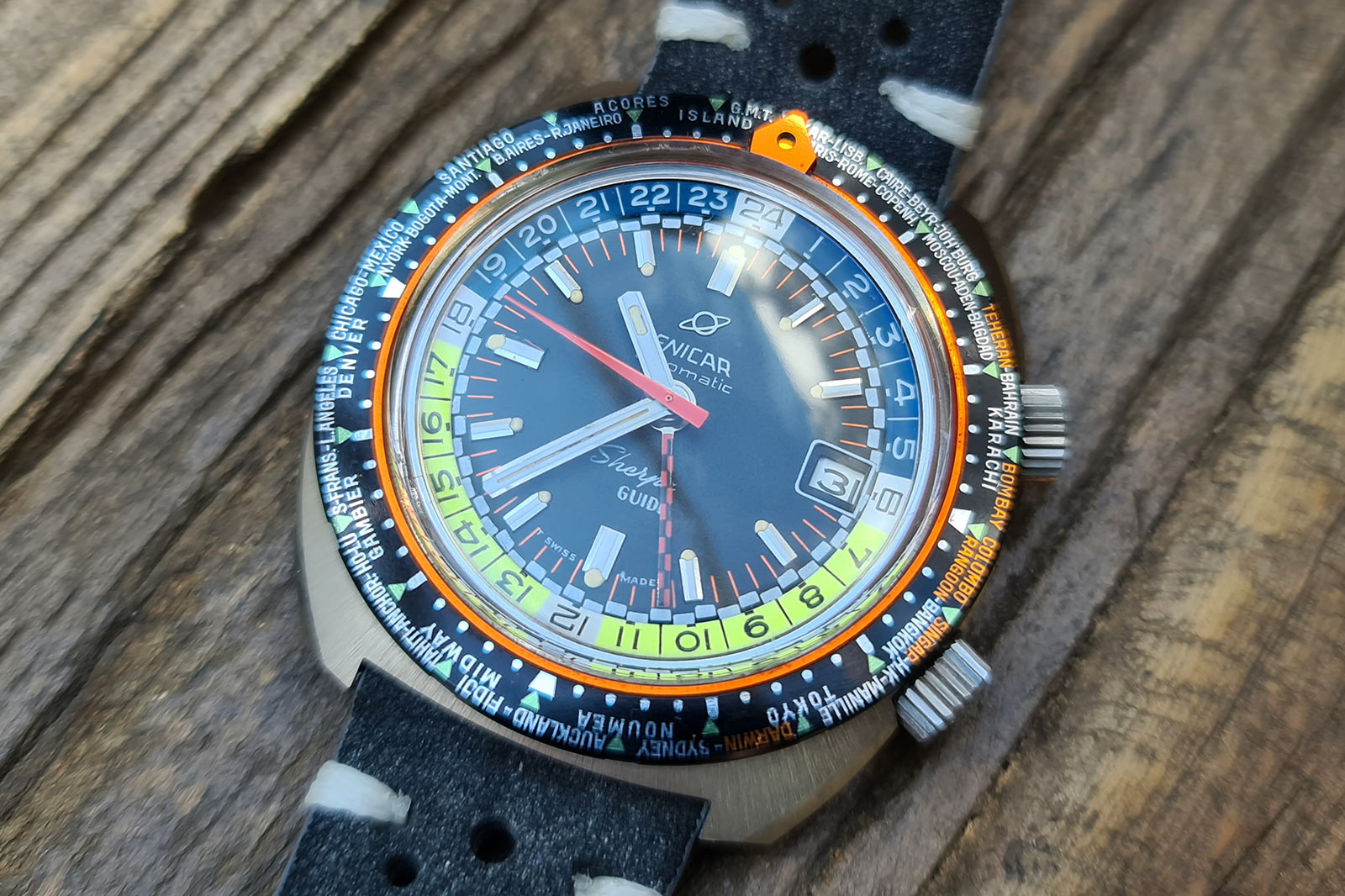 The Sherpa Guide took things one step further and combined that dual time layout with an outer worldtime bezel. It’s a seriously cool watch if you can find one in decent nick. Unfortunately, quite a lot of them were well-loved and therefore well used. Later versions added more colour to the whole affair and bright second hands to make the most of the display. It was like the cooler version of the Rolex GMT-Master. It still kind of is.

If you’re looking for a bit more of an in-depth foray into the subject, Time for a Change, Discovering Vintage Enicar by Martijn van der Ven (€75) should be your new bible.

There is however one term you’ll come across aplenty, and that’s Ultrasonic. Ultrasonic cleaning is a standard thing in watch servicing these days, using sound waves in water to sonically rid the movement of dirt. Enicar though were one of the first to use it and plastered it on many of the dials that hid their in-house movements. 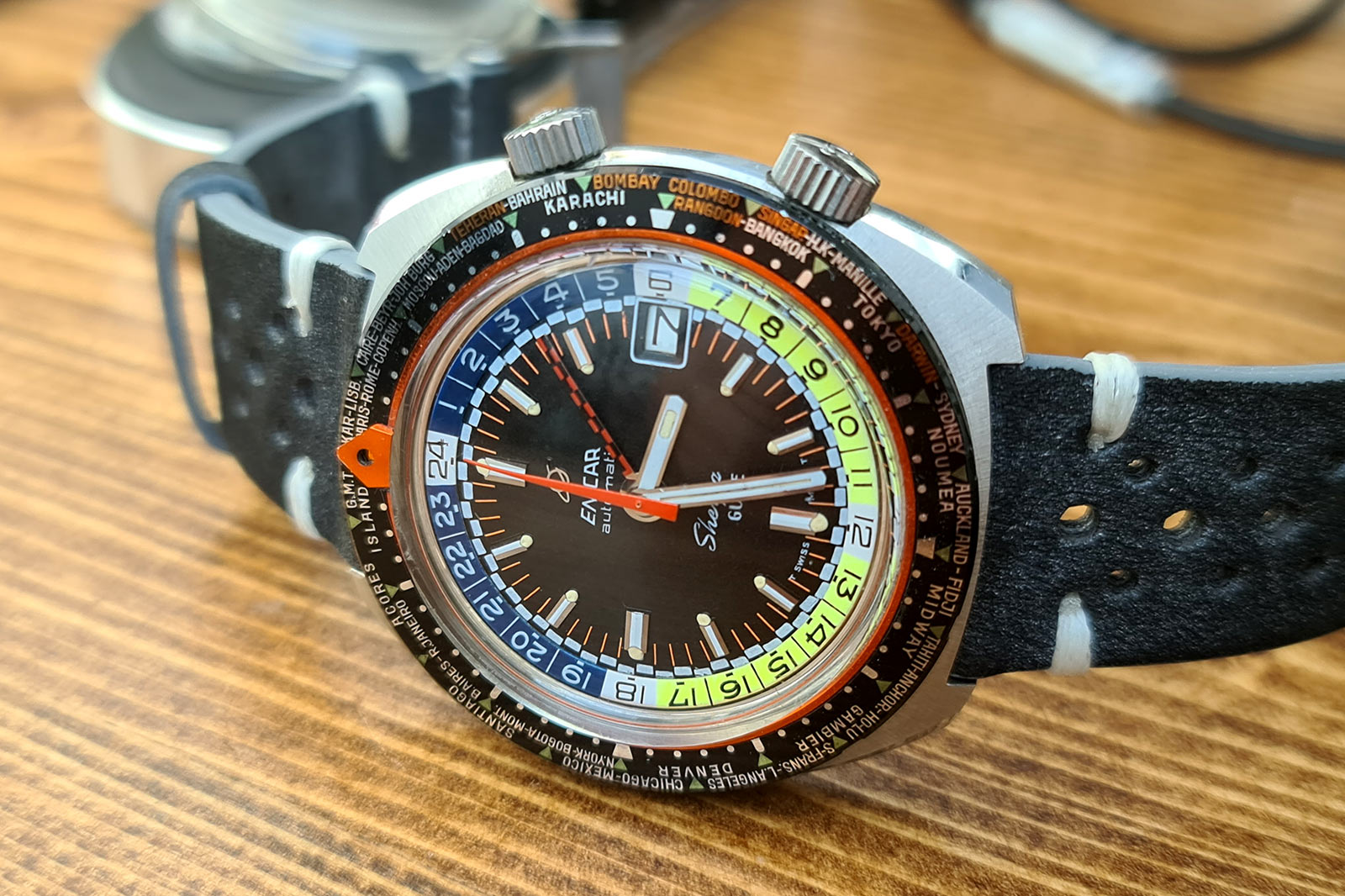 The idea was that the technique would take away less oil, allowing for longer service intervals and a longer lifespan overall. That in turn means that vintage Enicar watches should, by rights, still be working rather well. So how have they held up price-wise?

Well, Sherpas – Jets, Super Jets and Guides, specifically – will set you back anywhere between £3,000 and £8,000. That’s no surprise with their adventuring icon status, but if you’re looking for an unusual, dressier piece, earlier Ultrasonics go for just a few hundred. As the taste for retro adventure tool watches continues to grow, you can expect prices to only go up.

Now, if only someone would buy the Enicar name back… Or even just Sherpa. Please?