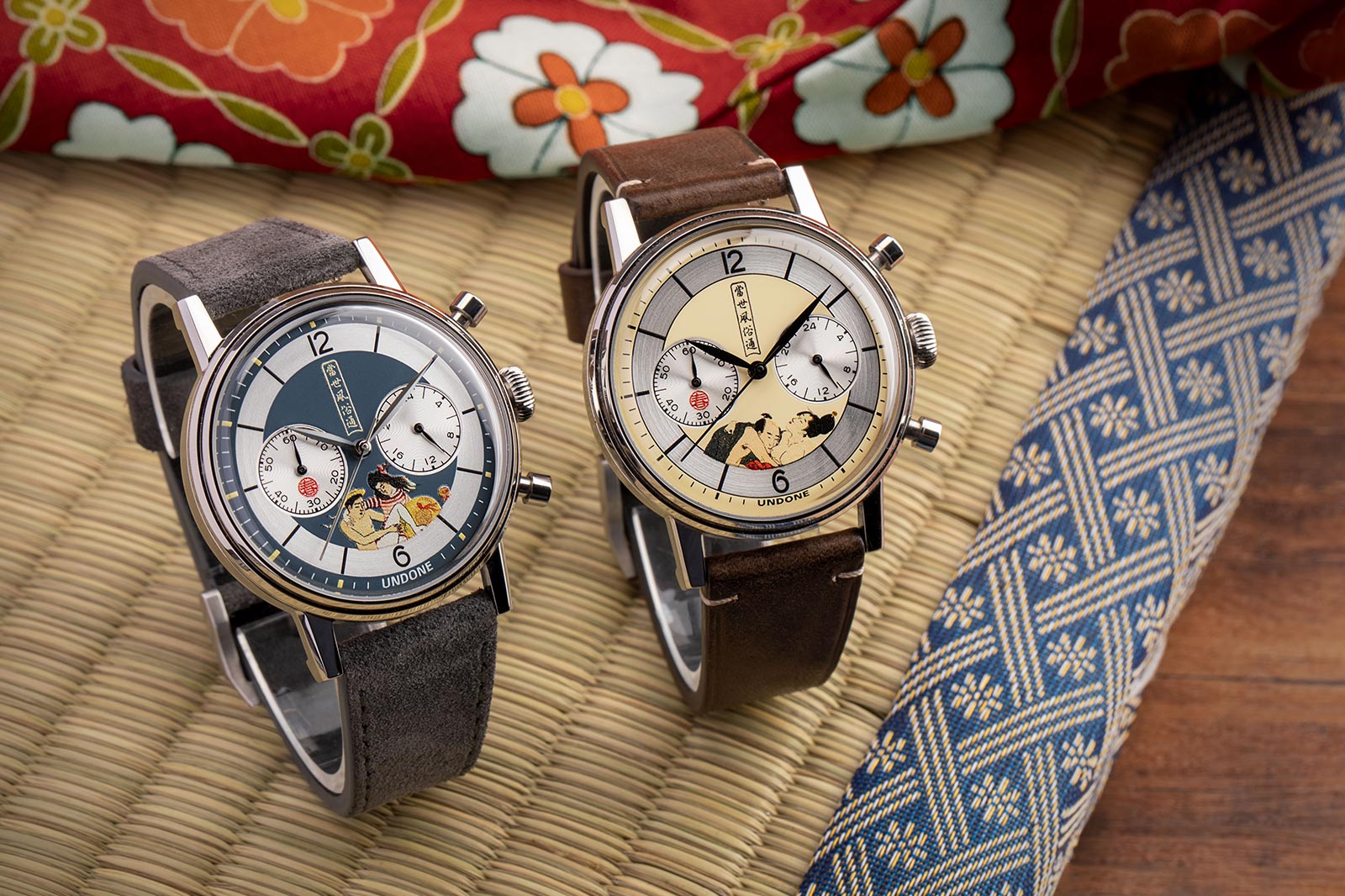 The focal point of these watches is obviously the couples found a 6 o’clock and on the caseback, which are in the ukiyo-e style of Shunga. The portraits on the front of the watches show very little of the action, leaving most of it to the imagination. However, on the reverse of the watch the same pictures are shown again with everything on display, although the traditional style makes them less gratuitous. The Edo version has the couple in traditional Japanese garb while the Meiji version is modernised. Whether you think erotic art belongs on watches or not, this is some of the least offensive around; it’s not an automaton for one thing. 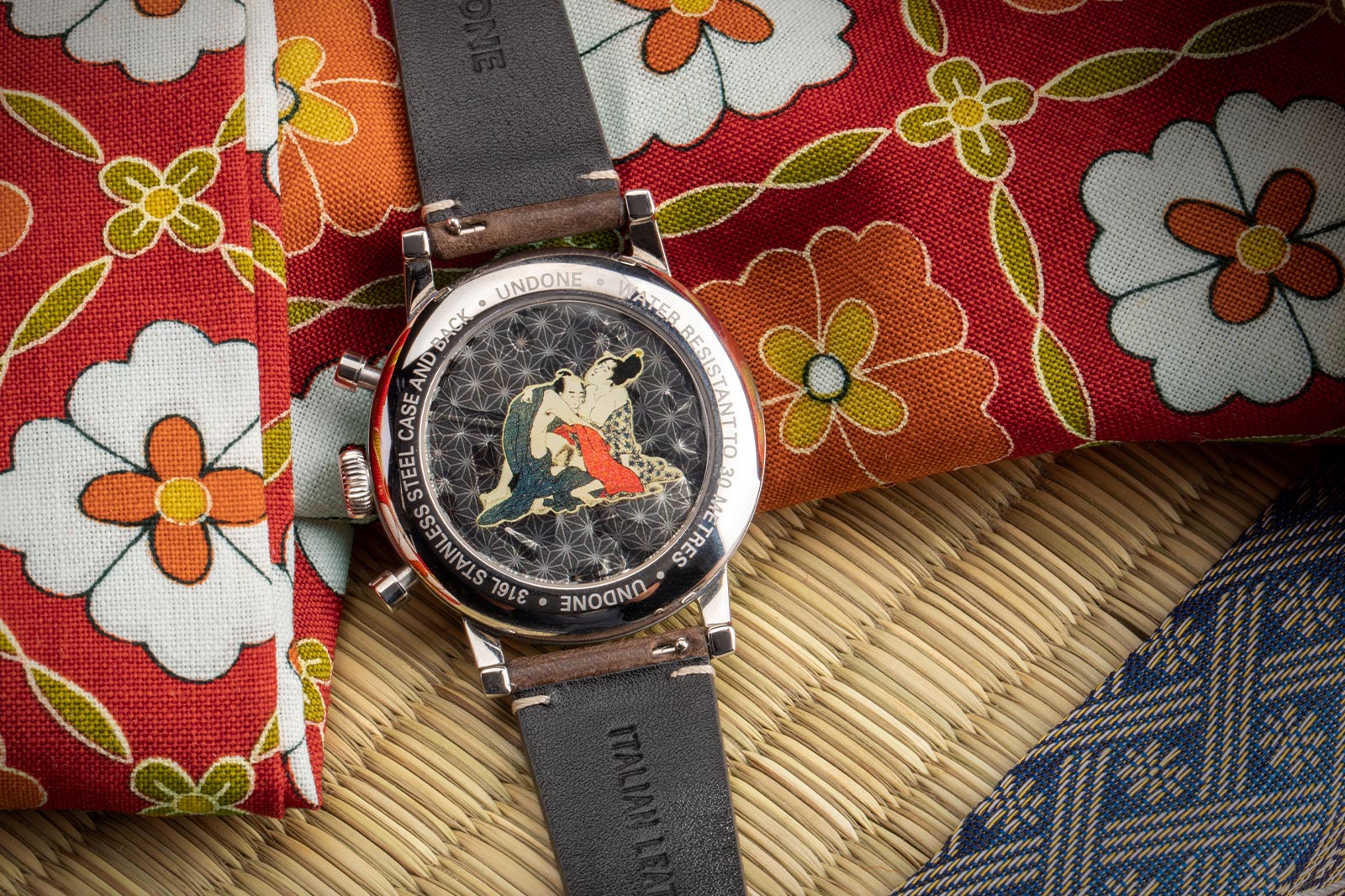 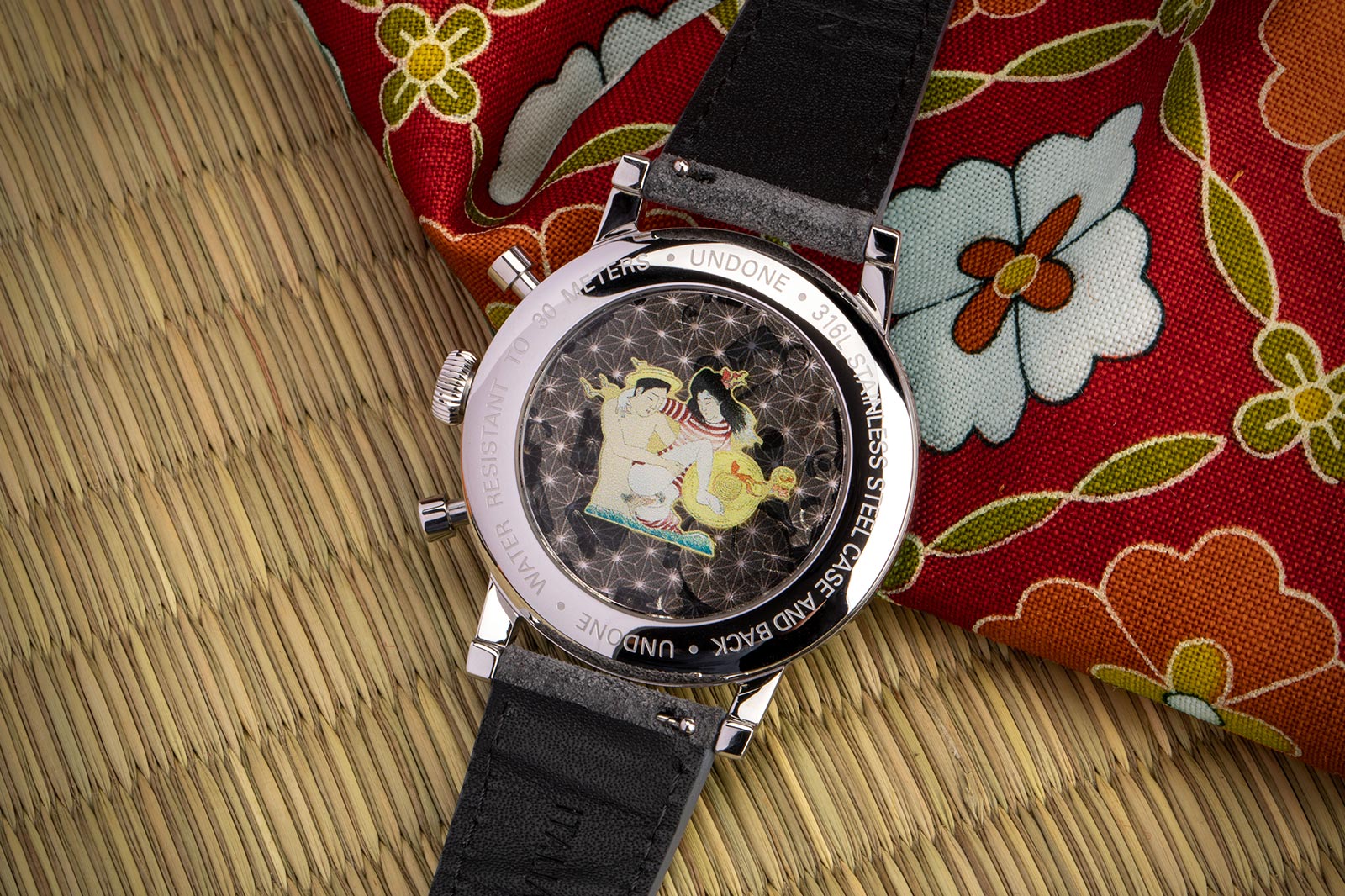 The two versions of the watch are also differentiated by the background colour of the dial. Edo, which represents a traditional example of the Shunga art, has a light beige colouration that is evocative of the parchment upon which the pictures are typically drawn. In contrast, Meiji is modern take on the art style and has a correspondingly modern navy blue backdrop. There are also several Japanese inscriptions on both that translate roughly to ‘the Ukiyo custom of pleasure-seeking’ at 12 o’clock and ‘Shunga – the picture of spring’ on the subdial at 9. 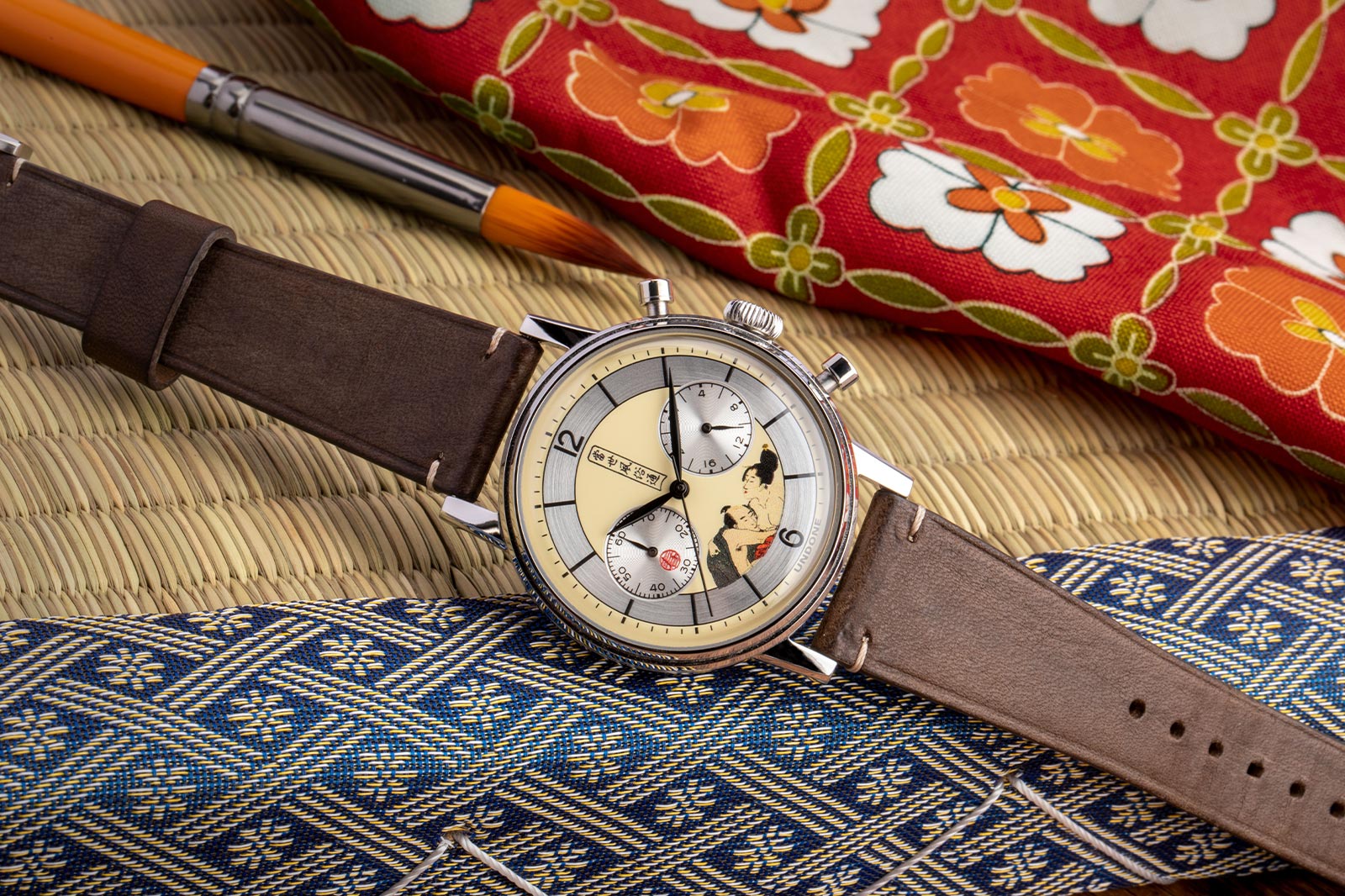 Moving on to the technical specs of the cases and dials, they’re are the same for both watches. Their cases are made from stainless steel and have 40mm diameters, water resistant to 30m. They also have two, silver coloured chronograph subdials with circular finishing in a bicompax layout that feature a 60-minute timer and a 24-hour display. The hour markers and Arabic numerals are also displayed within a silver coloured ring. 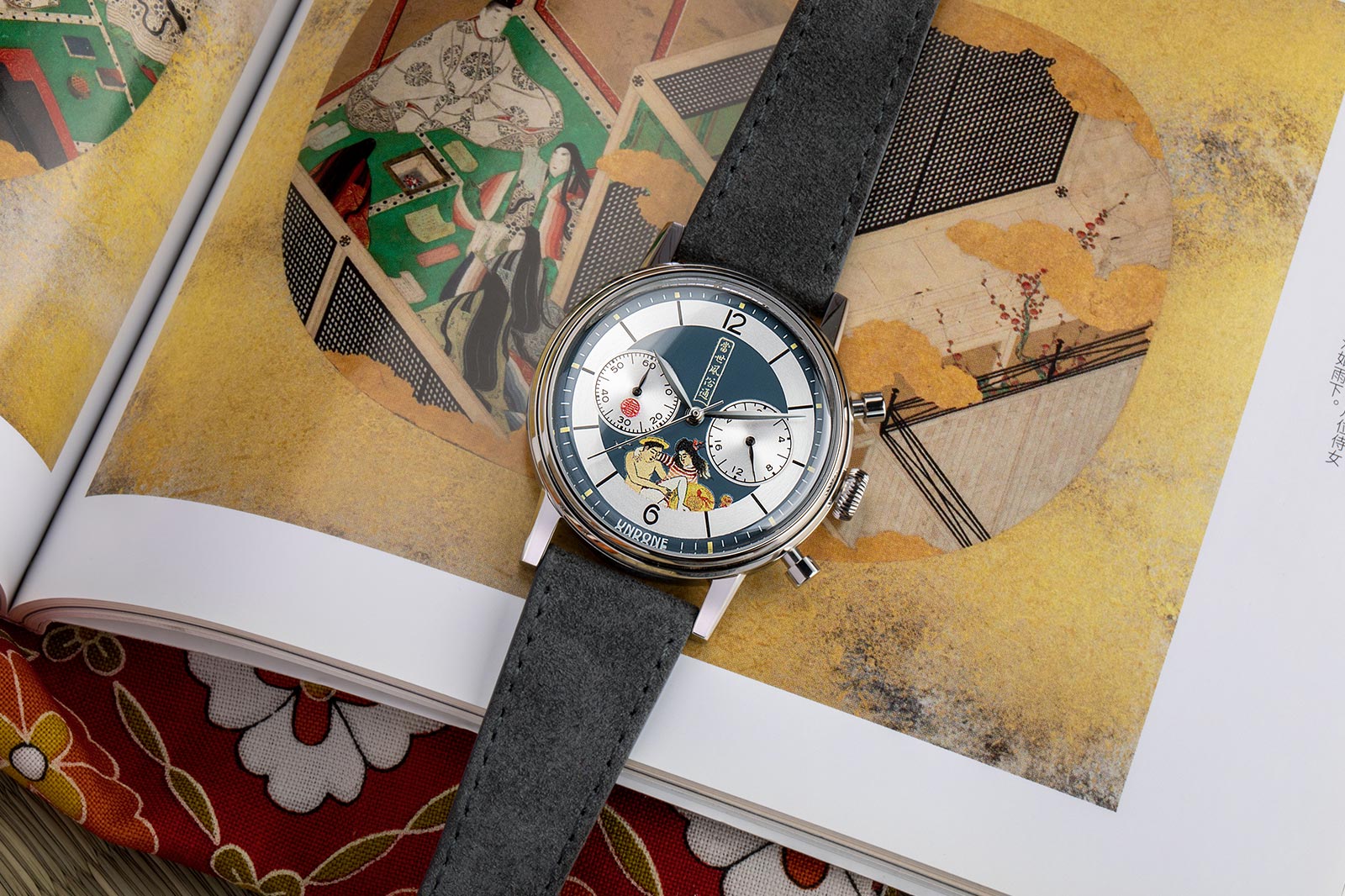 Housed inside both watches is the TMI VK64 meca-quartz chronograph movement with flyback function from Seiko. It’s essentially a bicompax version of the TMI VK63 that UNDONE used in the Slamdunk Looney Tunes watches [LINK TO https://oracleoftime.com/undone-score-a-slamdunk-with-duo-of-looney-tunes-inspired-watches/]. If you look past the pictures on the caseback you can also catch a glimpse of it working away behind the translucent glass.