Whether you’re in the air for work, for fun or just to get from A to B, there’s no denying the timeless appeal of the classic aviator’s timepiece. Who doesn’t want to look like a pilot? Fortunately, there are plenty of microbrands out there who have given their own unique spin to the pilot’s watch formula, creating a wide variety of styles and designs. Here are the best microbrand pilot’s watches out there. 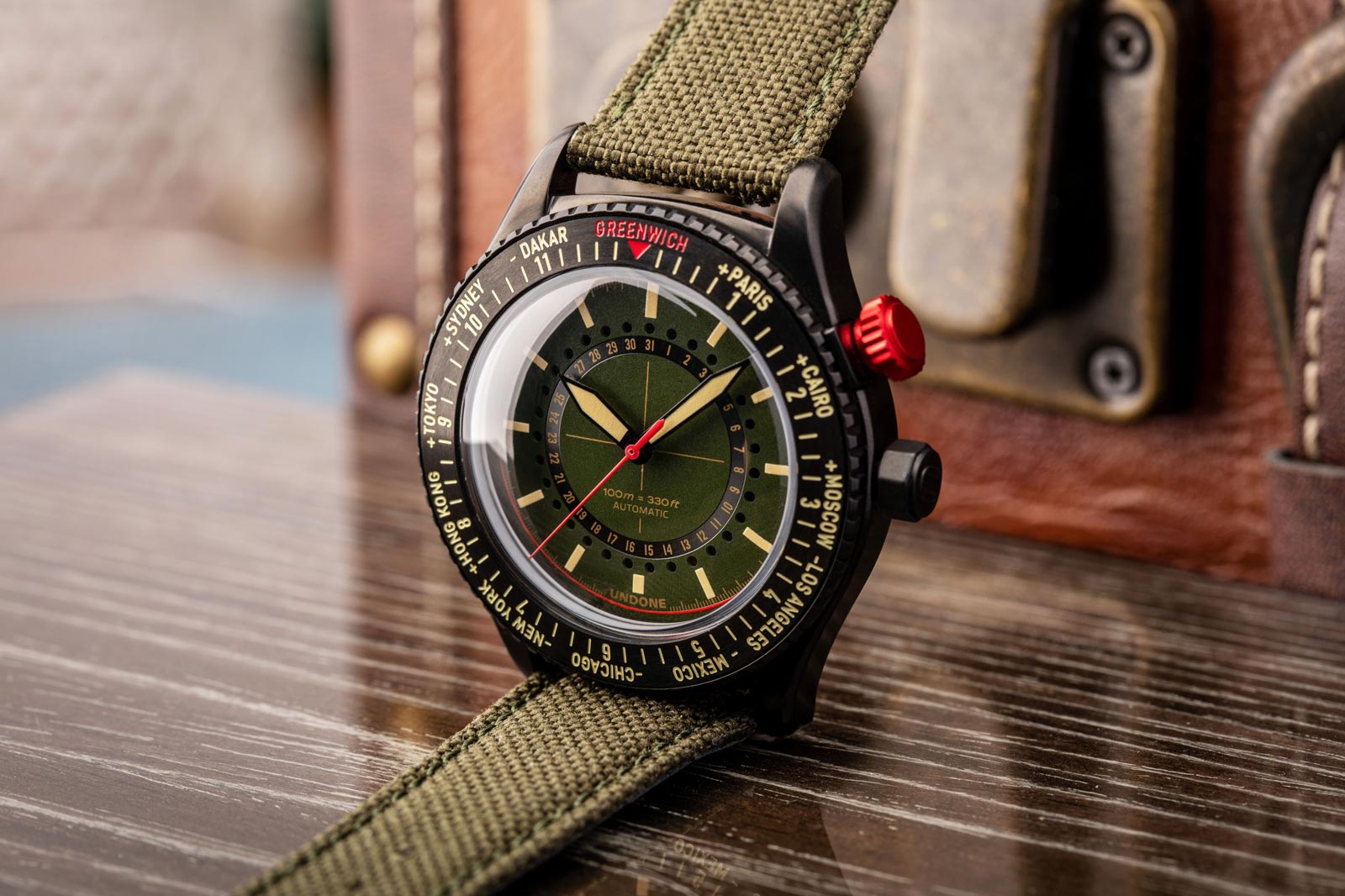 UNDONE’s new Aero Worldtimer is their latest pilot’s watch. It has a 40mm stainless steel case and 12-hour worldtimer rotating bezel with a red anodised aluminium bezel lock. The 12-hour worldtimer bezel is a bit of an anomaly as the standard format is 24-hours, but at least they’ve included important city names allowing you to track the time across (most of) the world at a glance. Worldtimers, like GMTS, are a classic function for pilots. 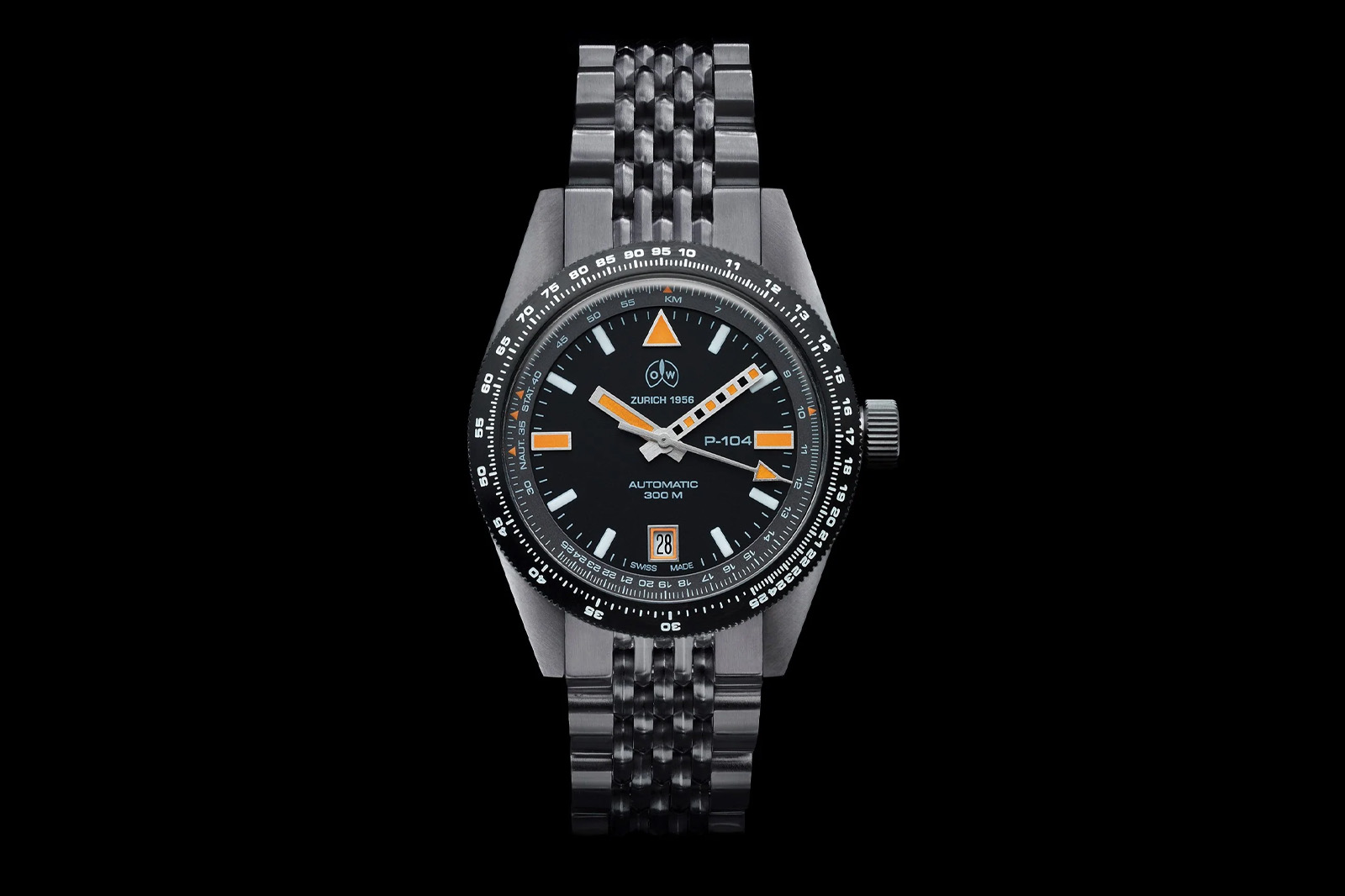 Ollech & Wajs aren’t a traditional microbrand, they were a powerhouse of tool watch horology in the 1960s, but were forced to close prior to being revived as a microbrand. Designed for professional military and commercial pilots – the serious aviators – this blacked-out beauty comes equipped with a slide rule similar to that which made the Navitimer famous and a layout based on an instrument panel. That means intense contrast with white and orange indicators and a clear, legible layout. Powered by an ETA 2824-2 movement, adjusted in-house, and finished with a 1960s-style bracelet, this is a new take on the golden era of international aviation, with a stealthy military twist. 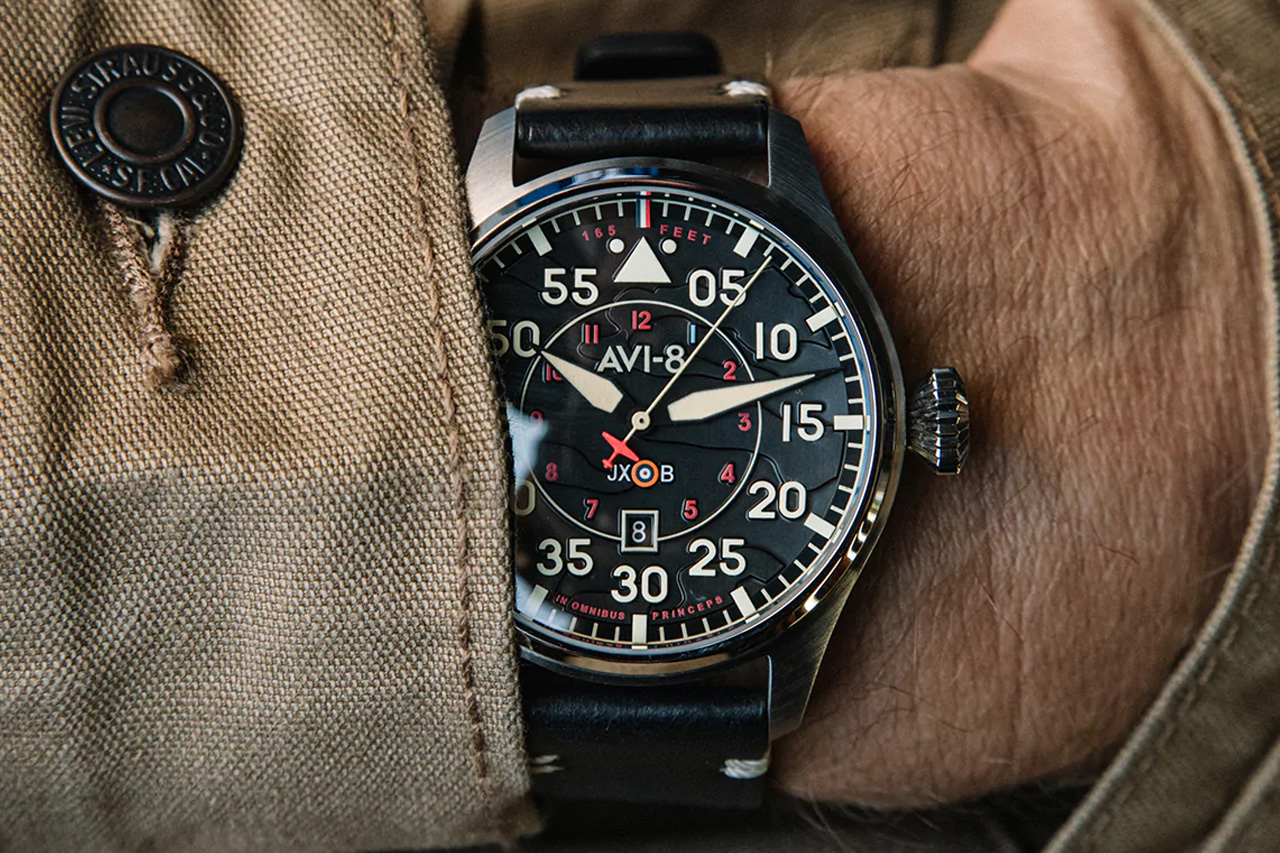 There are a huge number of nods to British aviation history on Avi-8’s new Hawker Hurricane Clowes wristwatch. First and foremost, its large 46mm diameter is a reference to historic pilot’s watches from the 40s and the dial narrows in on the WWII period even further. It features the camo print and aircraft code of the Hawker Hurricane flown by Arthur “Taffy” Clowes, a legend of the RAF. Additionally, the seconds hand’s counterbalance depicts the plane itself. 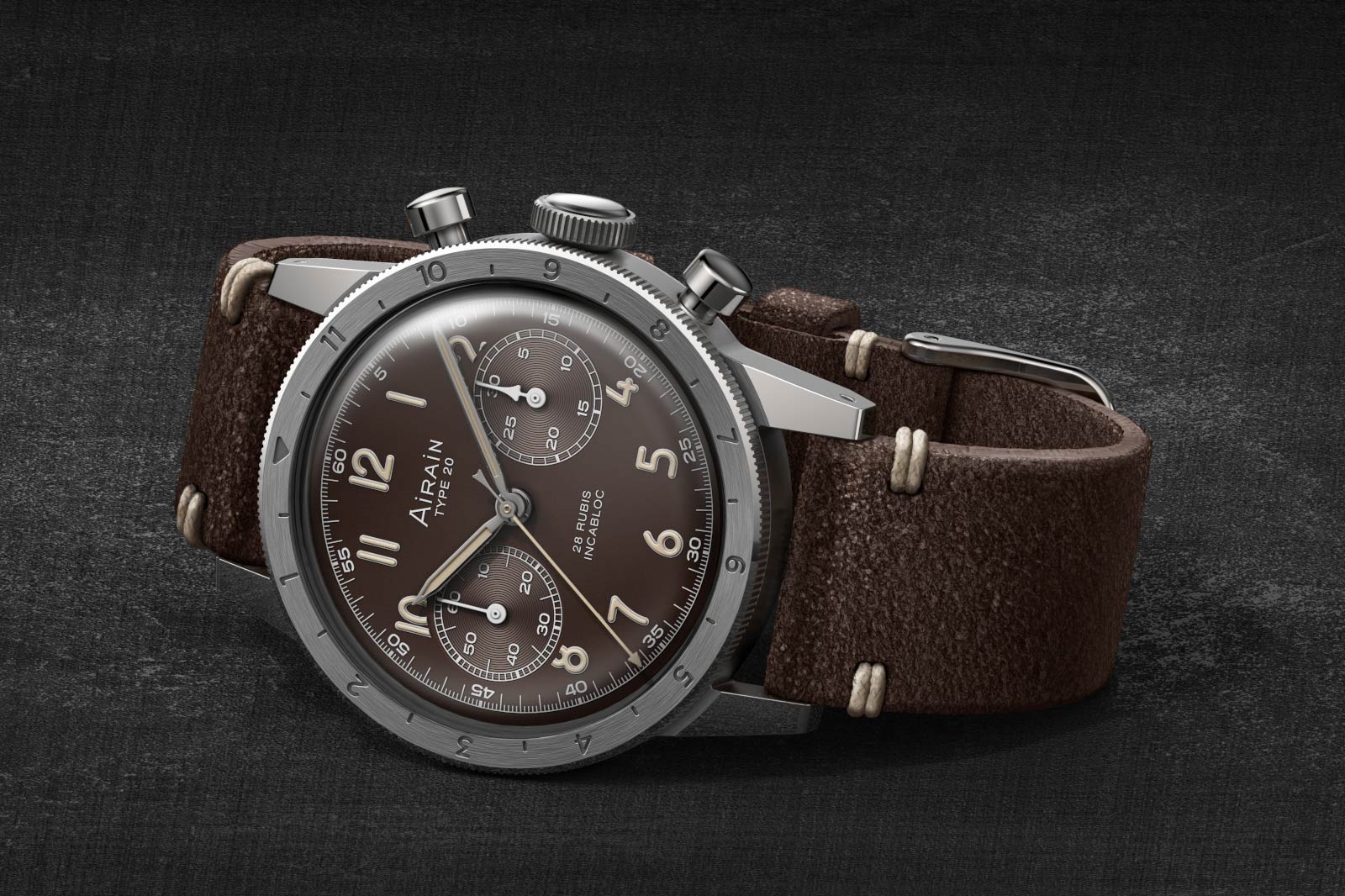 It’s a misnomer that all microbrands are young, Airain has a storied history dating back to the 1930s and was revived in the mid-2010s. Their most iconic historical watch was produced in the 1950s in the form of the Type 20 pilot’s watch, which had associations with the French military. In 2022 there’s a new version of that watch called the Airain Type 20 Re-Edition that faithfully recreates the original timepiece with the same layout and design, including hesalite crystal glass and bicompax chrono display. 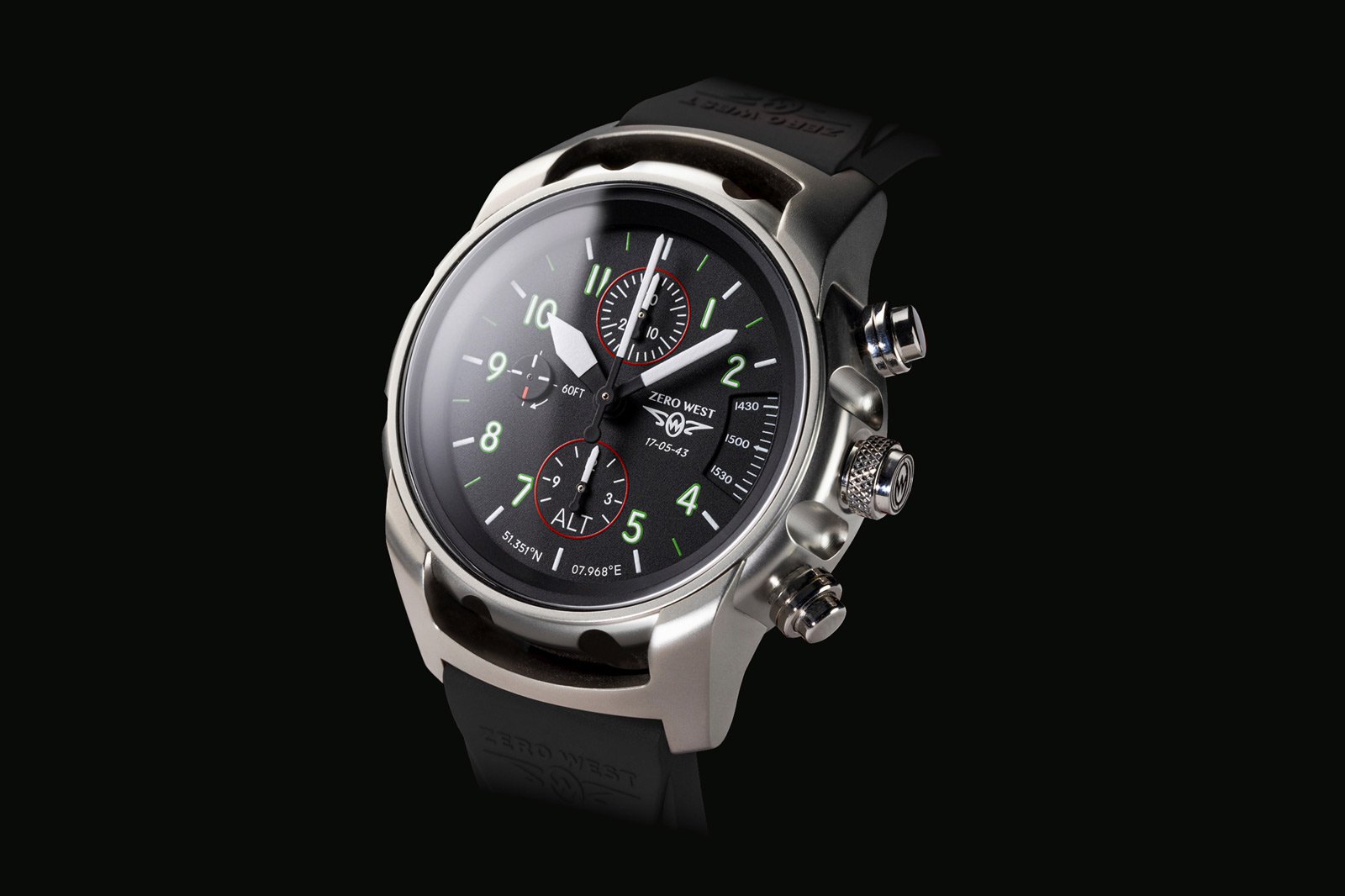 Of the many aircraft to take part in war, the dam busting Lancaster bomber is one of the most iconic. Zero West’s DB-2 Lancaster wristwatch pays homage to the historic planes that took part in the legendary Operation Chastise that saw the destruction of key infrastructure used by the Germans. More specifically, it celebrates the Lancaster bomber ED825 that bombed Sorpe Dam, with each watch including a machined disc from that exact aircraft. You can’t get closer to aviation history than this. The timepiece itself is styled after an altimeter and houses the Sellita calibre SW500-C with a 48-hour power reserve. 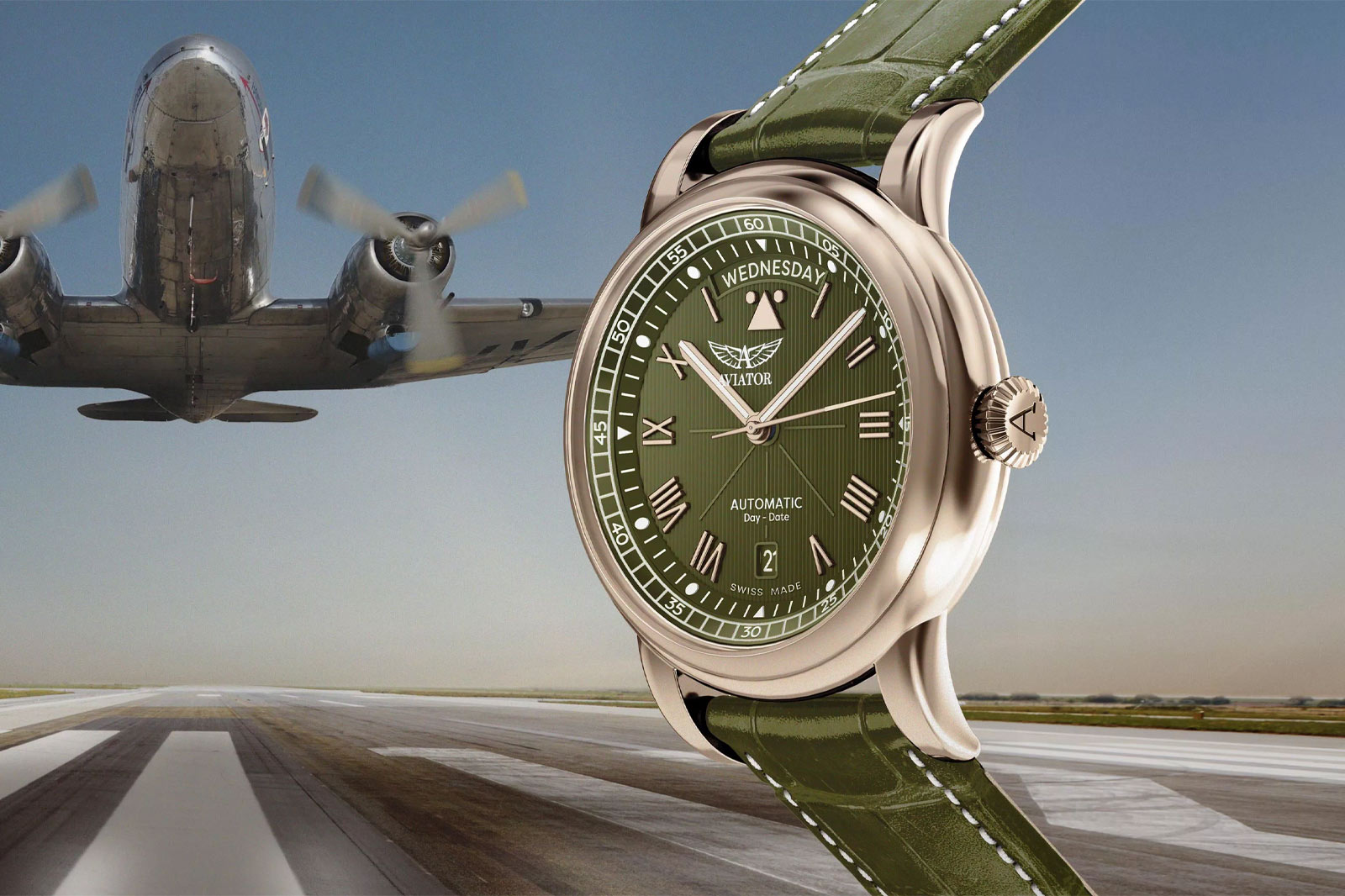 The golden age of air travel is usually dominated by airlines like Pan-Am, but when it comes to the actual aircraft that drove the glitz and glamour of transatlantic flight, none were more iconic than the superlative Douglas DC-3 – the namesake of the latest from Aviator. With a case shaped like a DC-3 fuselage and tactile grooves inspired by Art Deco, the Douglas Day-Date is a more luxurious take on the humble aviation tool watch, particularly handsome in the combination of military khaki and rose gold. Yet while a trip on the original DC-3 would have been pricey at the time, that’s not the case here, despite the handsome look and, incredibly, a custom Aviator calibre. 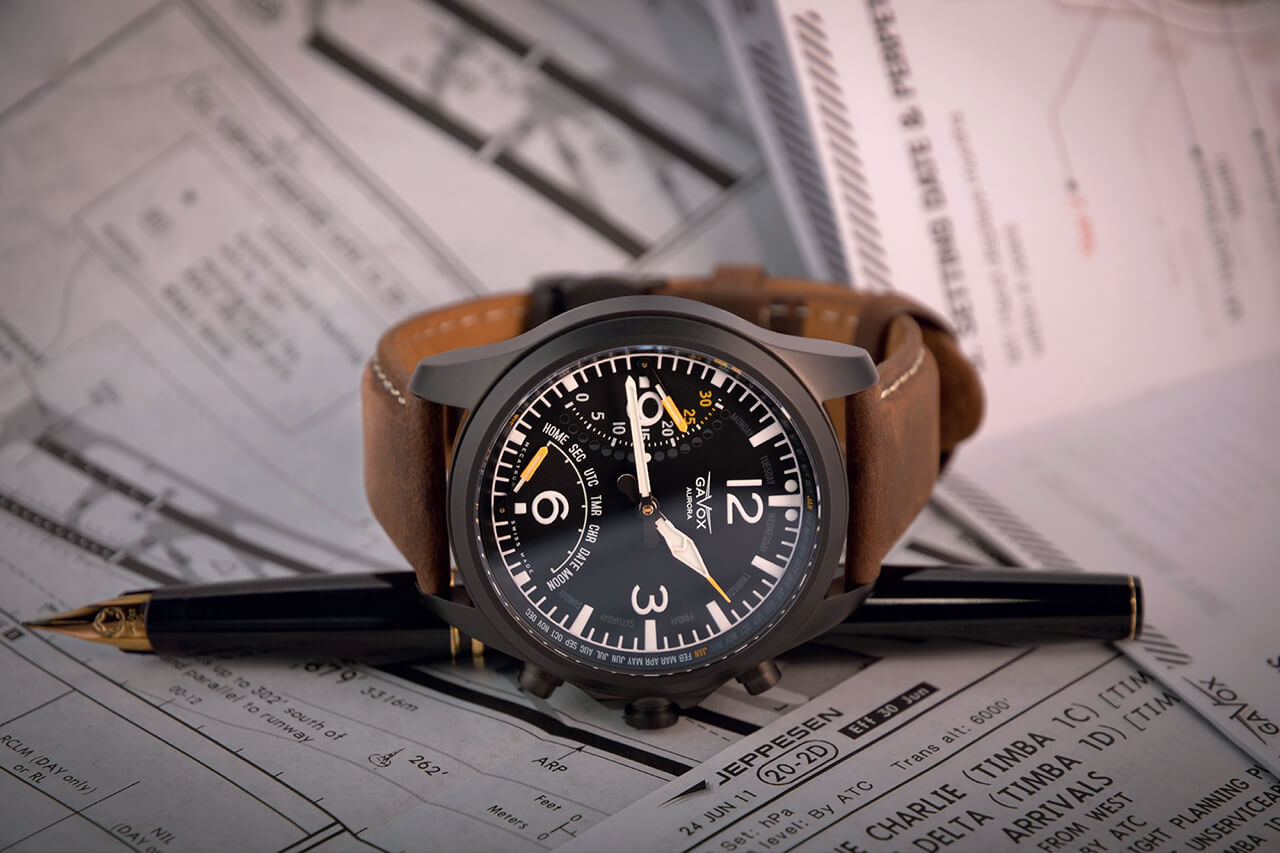 It’s easy to sniff at quartz watches, but when you’re a professional pilot relying on your instruments, that’s something you can’t afford to do. And besides, the Gavox Aurora is not your standard battery-powered timepiece; it’s the first multi-function quartz watch that handles all geographical and political time zones – that includes all the non-standard ones people forget. It’s wrapped up in a blacked-out design ripped straight out of a modern aircraft and might well make you wonder why exactly you love mechanical so much. For a second, at least. 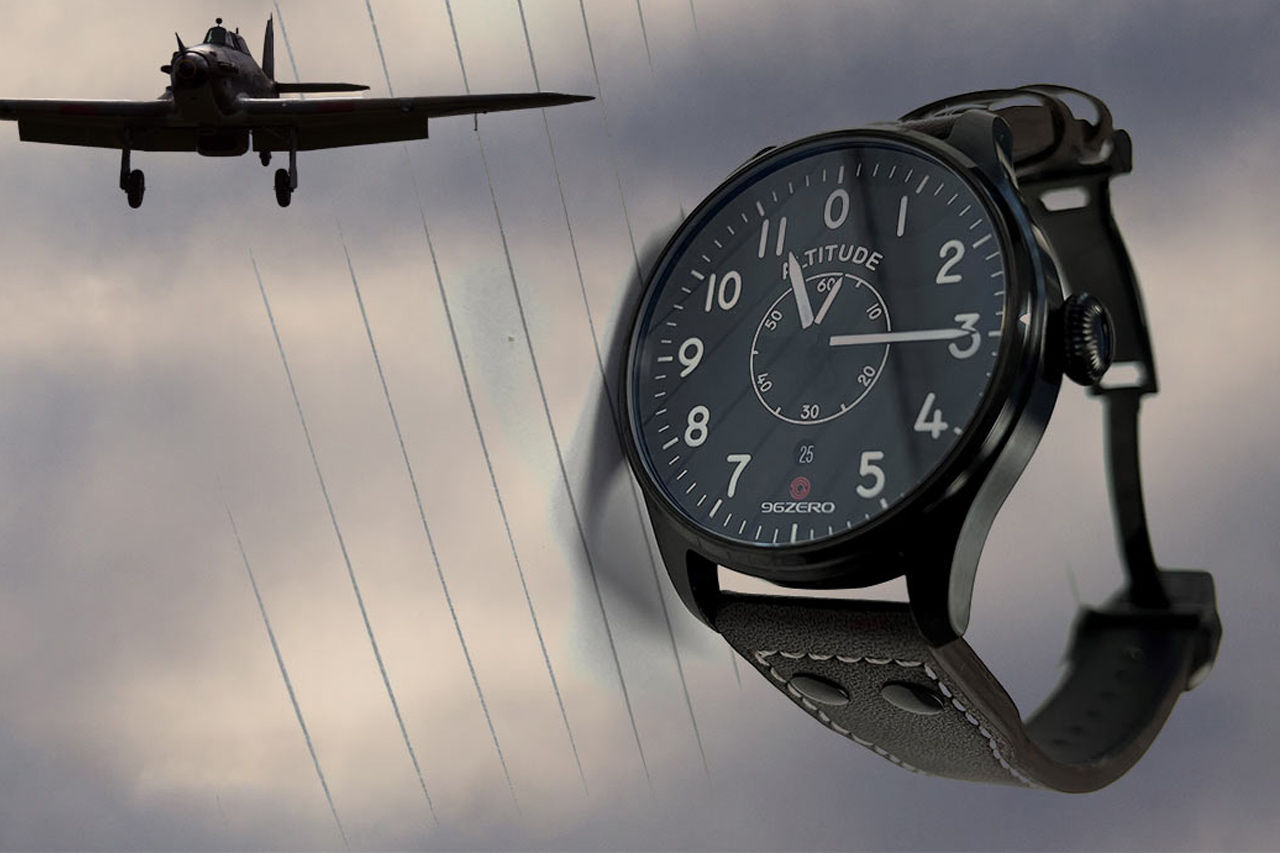 Completing their trilogy of ground, sea and air military timepieces is microbrand 96Zero’s Altitude pilot’s watch – due for launch in 2023. As with many military pilot’s watches, it has a fantastic story attached to it, inspired by the WWII stalwart Hurricane. The Hurricane was a relatively understated plane, being both cheaper and easier to produce than the legendary Spitfire, although in the debate of which craft was better the scales are slowly tipping in favour of the hurricane. 96Zero wanted to capture a similar sense of clean and unfussed design, as such it takes the instrument panel of the Hurricane and reimagines it in wristwatch form, replacing the altimeter with a date function. 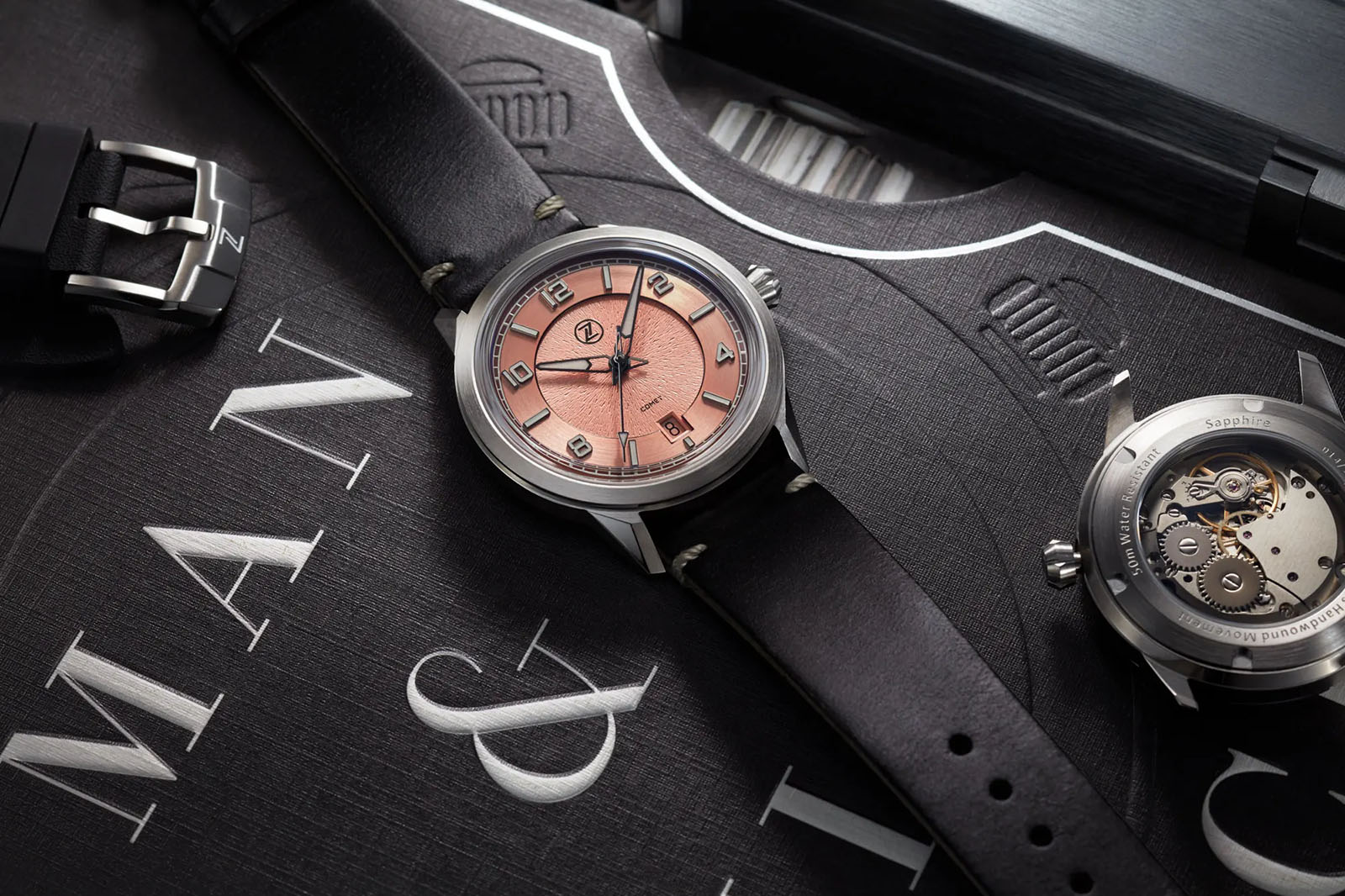 Zelos are known as a premier Microbrand because their quality is like that of many major brands. The Comet pilot’s watch is no different, featuring a 39mm stainless steel case with brushed and polished finishing and housing the Sellita SW215 manual movement. The name, Comet, is a reference to the world’s first commercial passenger jet from the 50s. As such, it has elegant, jet-setter vibes as opposed to military utilitarian style. 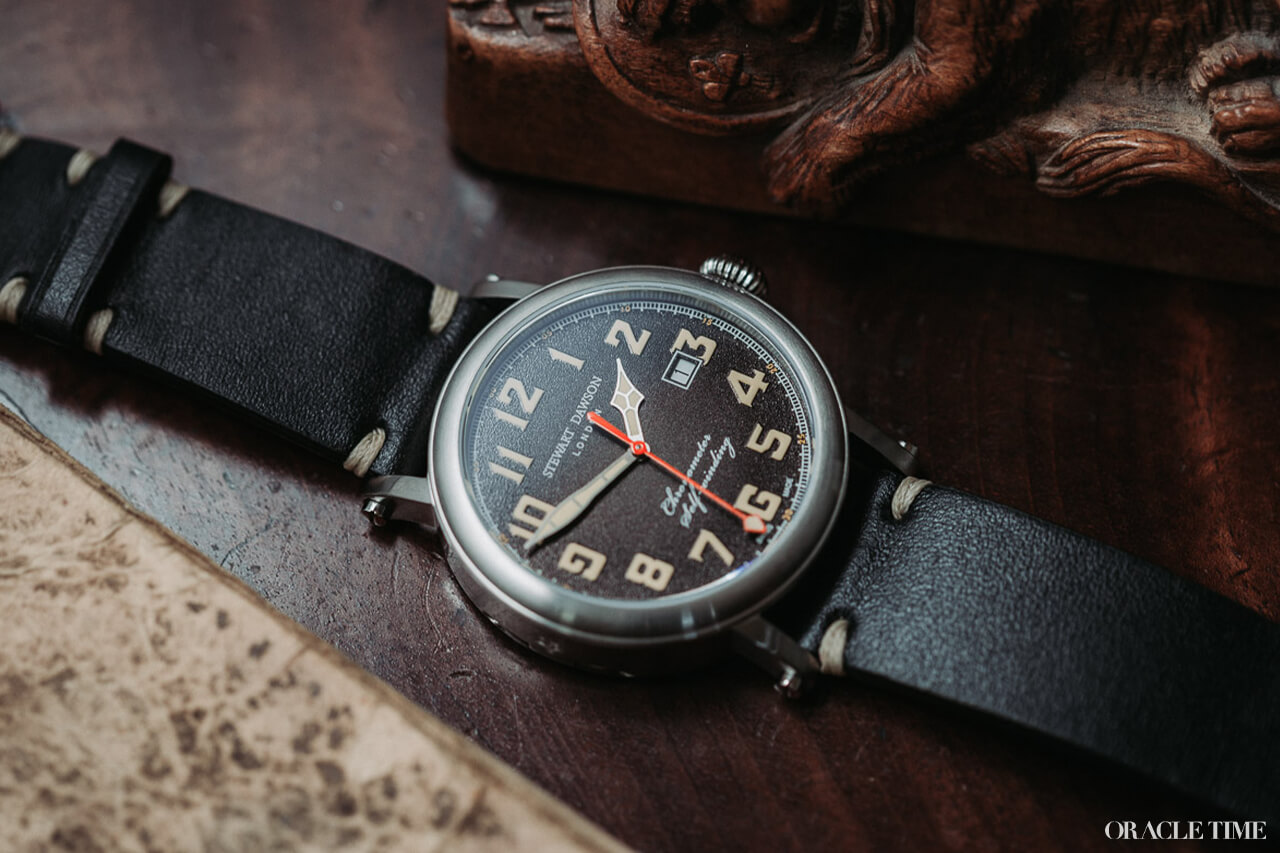 With the name Darkest Hour (read our review here), the inspiration behind Stewart Dawson’s retro 40s style pilot’s watch is clear, the famous wartime leader Winston Churchill. The oversize knurled crown doubles as both a functional aspect of a pilot’s watch and a nod to the pocket watches that the prime minister was known to wear. As for the dial, it’s stylised numerals and clear legibility are a riff on historic models like the Zenith Type 20 and IWC Big Pilot’s Watch.