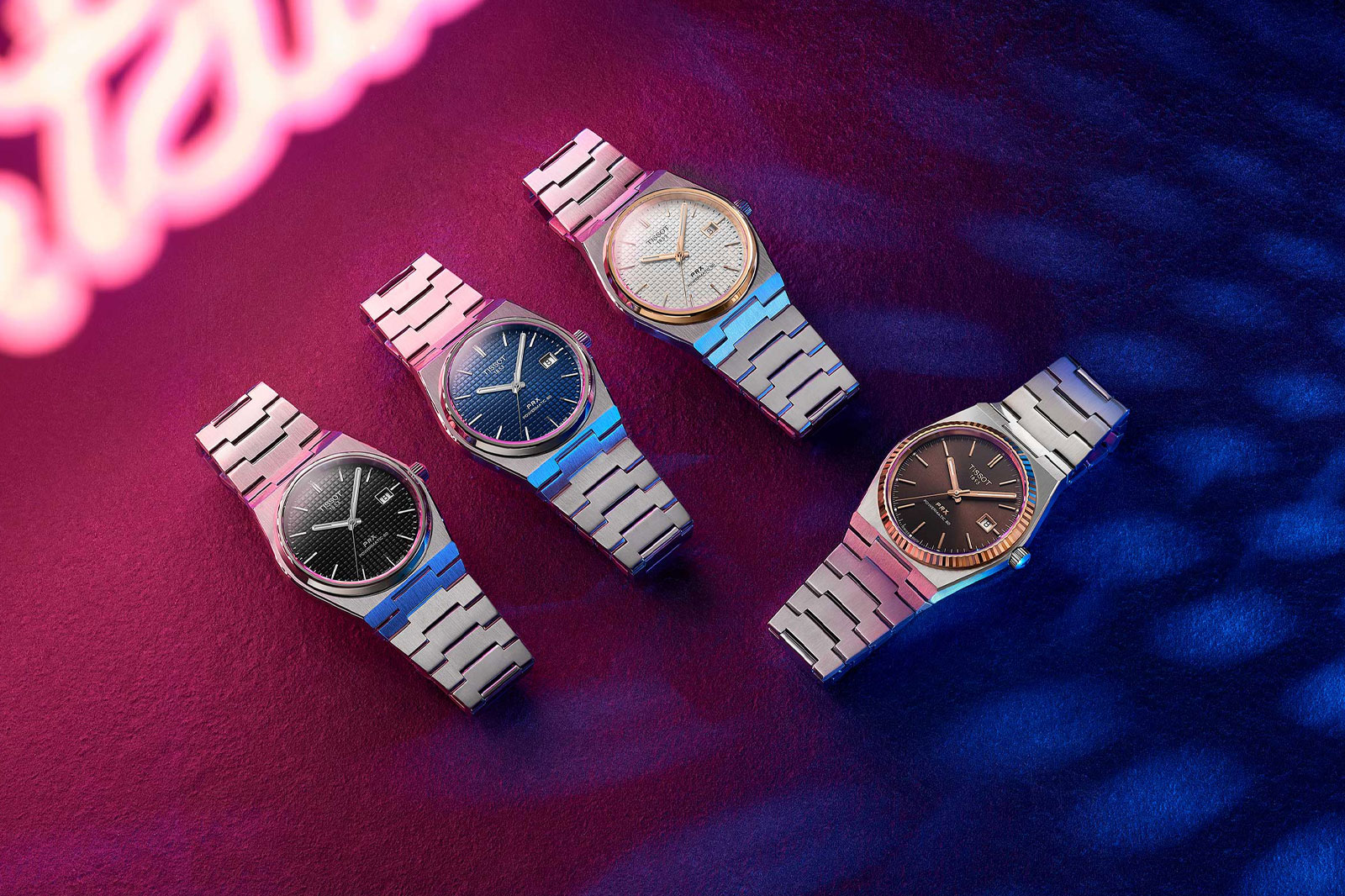 The 1970s was a good decade for three things: disco, Star Wars and sports-luxe watches. Sure, John Travolta was the most recognised face in the world, but with that slicked-back hair and disco fever came a taste for slimline watches, integrated bracelets and luxury sports style. We immediately think of the Patek Philippe Nautilus, Vacheron Constantin 222 and the seminal Audemars Piguet Royal Oak that kicked the lot off. Alongside those giants we mustn’t forget the Tissot PRX collection.

Not everyone could stump up the cash for a fine timepiece that was zeitgeisty and pricey in equal measure, and by the tail end of the decade Tissot, a brand known then as it is now for its accessibly cool watches, made a play for the same crowd. 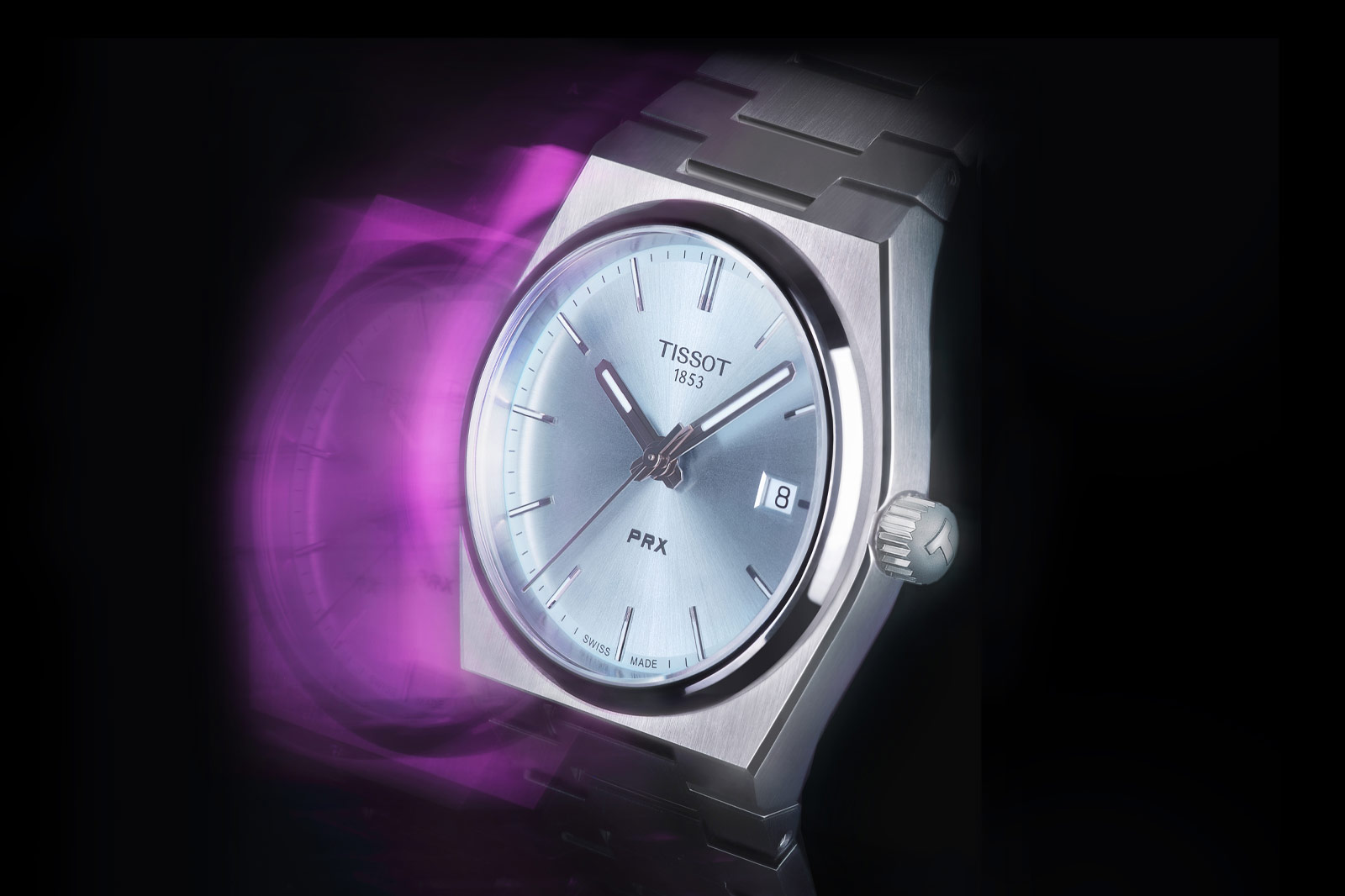 In 1978 the brand released the original PRX. It had a flat barrel of a case with sharp facets and a signature bracelet with large, flexible links integrated into the case. Inside was a then-technologically impressive quartz movement, making it not just timely but affordable. It was cool, stylish and, primarily, a sports watch, originally unveiled under the name Seastar. It didn’t take long for Tissot to give it its own moniker, standing for ‘Precise and Robust’ and the Roman numeral for ten, meaning ten atmospheres, equivalent to 100m water resistance.

Like many quartz pieces from its era, those three little letters, PRX, pretty much vanished into the annals of watchmaking history for most collectors, a lovely looking, quartz conversation piece that was a novelty more than a core piece of your collection. It also vanished into Tissot’s own vaults – until the time was ripe for the watch to make a comeback. 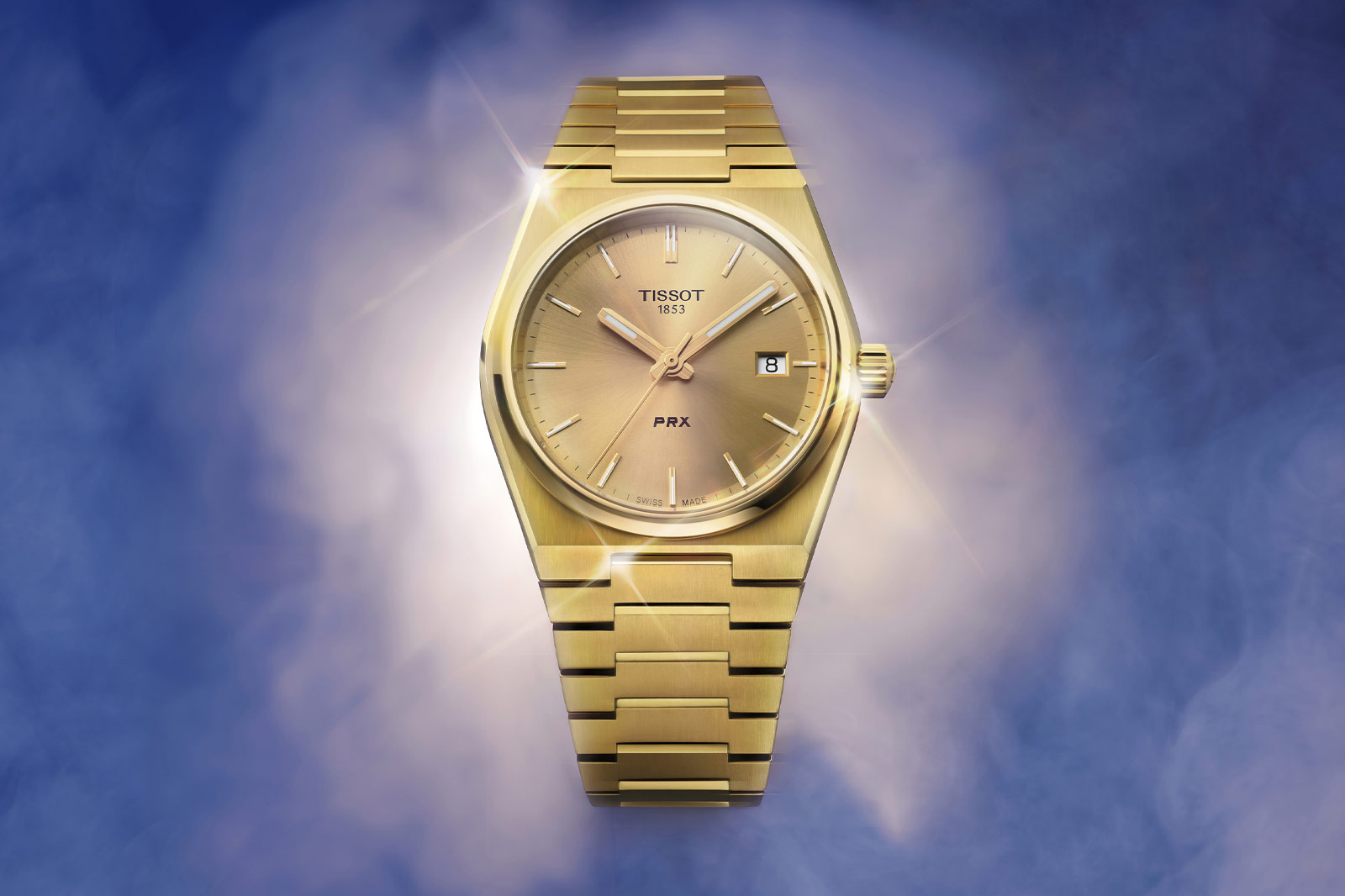 That time was about one week into the tenure of current Tissot CEO Sylvain Dolla. “During my first week at Tissot I didn’t yet have the fervour you need for the job,” he says. “Then I went up to our archive, where we have 7,000 beautiful, historical watches all refurbished in drawers. I remember looking through and there was a present in every drawer. And then I arrived at the 1970s, where there was a 35mm original PRX. I said how amazing it was and my product manager told me that they had already studied the construction for a potential relaunch. I said we had to go full speed!”

This was back in 2020, when Tissot needed a marquee watch to rally the brand around. The 1970s resurgence was already in full swing, sports-luxe pieces aplenty were making horological headlines and the PRX had all the right stuff to make a big splash, which it did with the PRX 40 205 collection. 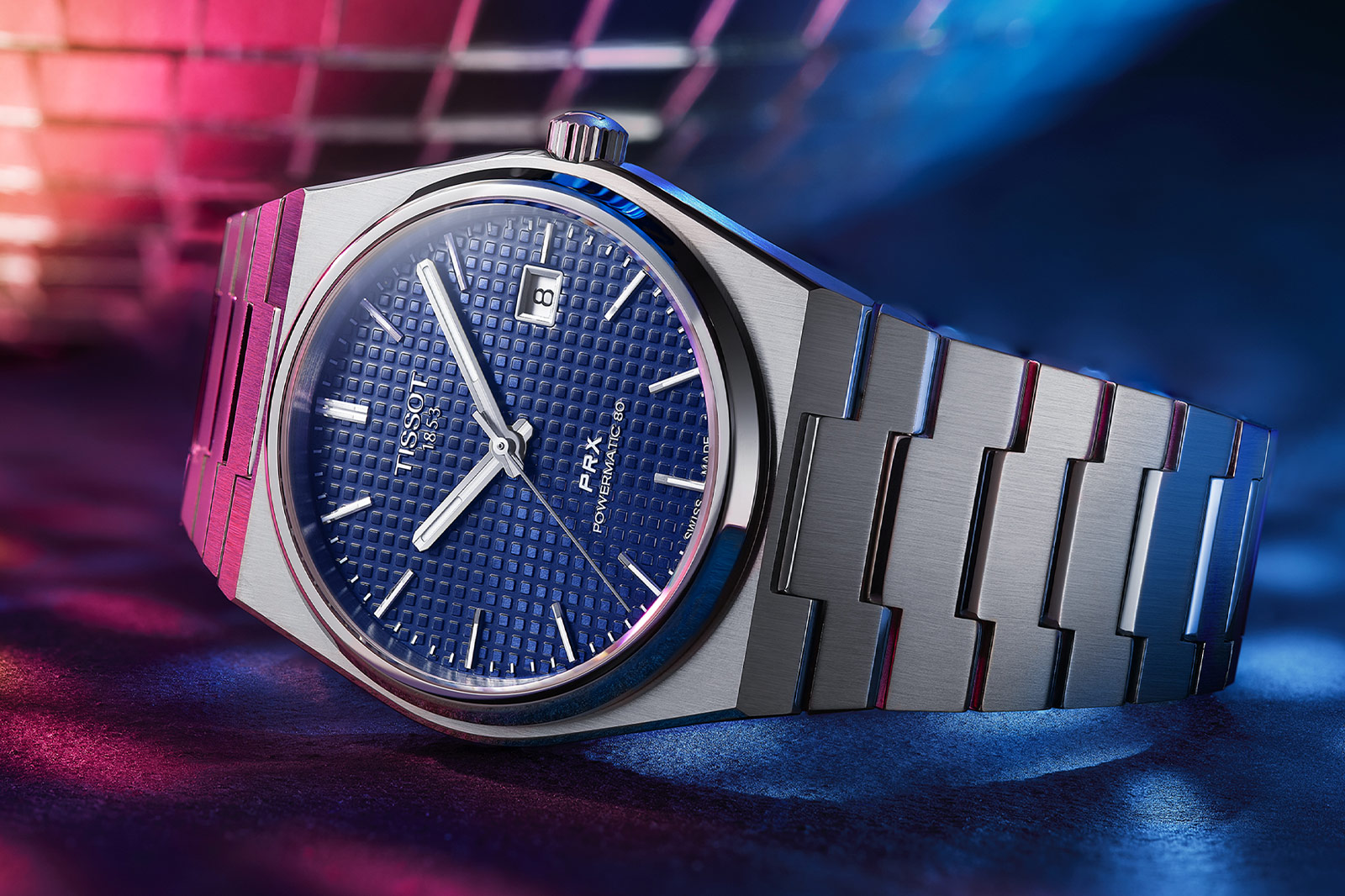 “We used tomography to be true to the original design,” explains Dolla, “keeping all the proportions the same just enlarged to 40mm. We started with the quartz because the original one was quartz and immediately went into the automatic. It was the fastest development we’ve ever done at Tissot.”

Tissot hit the nail on the head with the PRX Collection and, to mix metaphors, made the hammer strike twice with the automatic. It was an instant, worldwide success, the kind that you just can’t predict. And they very much did not predict it. Indeed, they found themselves in the same position as Rolex and Patek in that they simply couldn’t build enough pieces for demand. There were waiting lists stretching into the months, the kind of fervour you’d expect from a collab between Tissot’s Swatch Group stablemates. 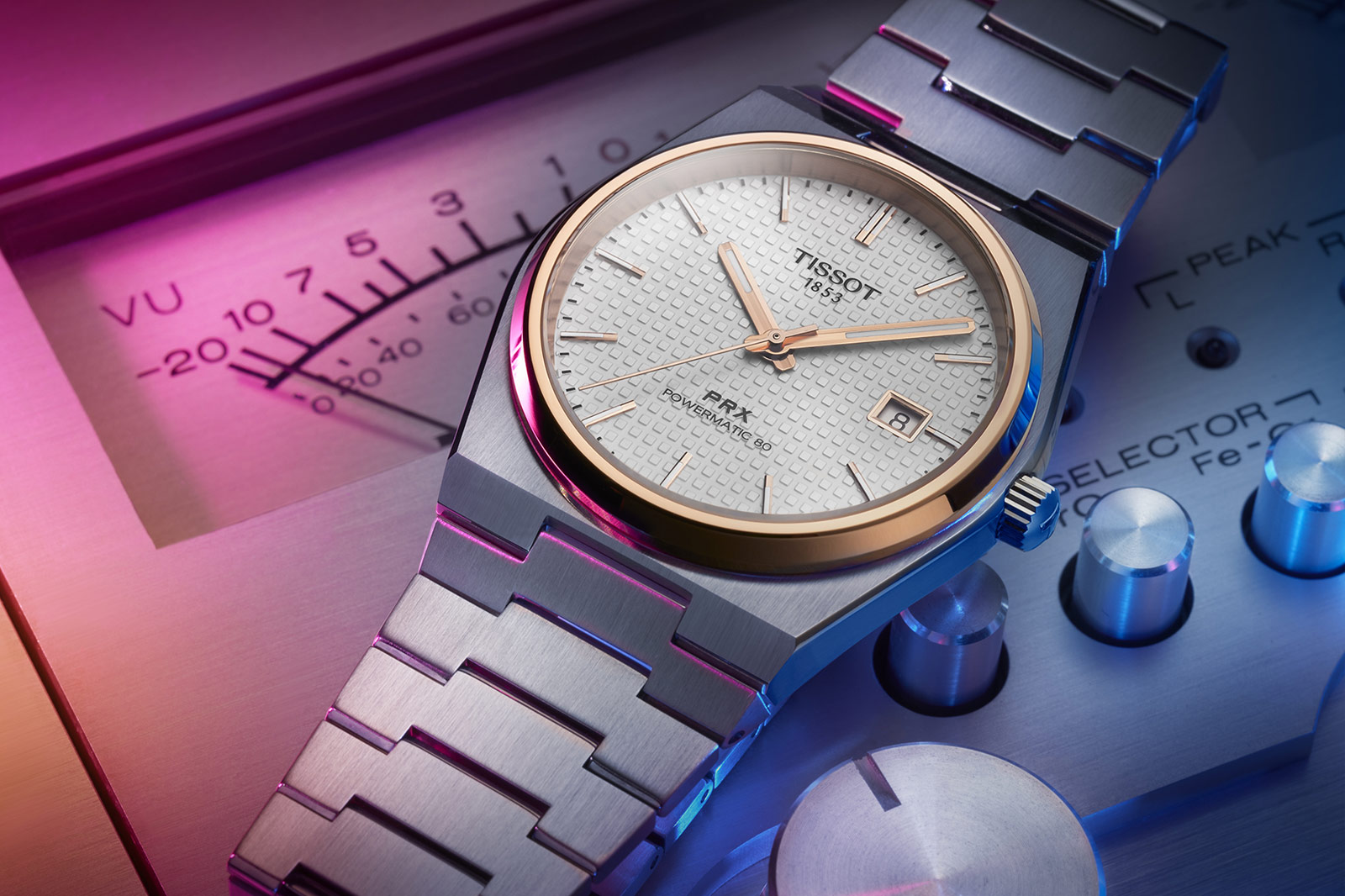 “We completely screwed up with the forecast,” Dolla admits. “We had to multiply our initial production by 20. For months it was my nightmare, every market was asking for more! We knew it was going to do well, we had confidence in it, we just didn’t realise exactly how well it would go.”

Fortunately, those issues are just about under control right now. You can get a PRX pretty easily without having to swap it for a kidney, and today it represents one of the best value-for-money watches on the market. Not just in terms of design, but also in terms of its finishing, style and the superb Powermatic 80 movement the automatic versions are equipped with. You can – and probably should – grab one at some point. Unfortunately, though, Tissot just hasn’t learnt from that one  mistake. The 3-hand PRX models might be readily available, but the PRX Chronograph, unfortunately, is not. 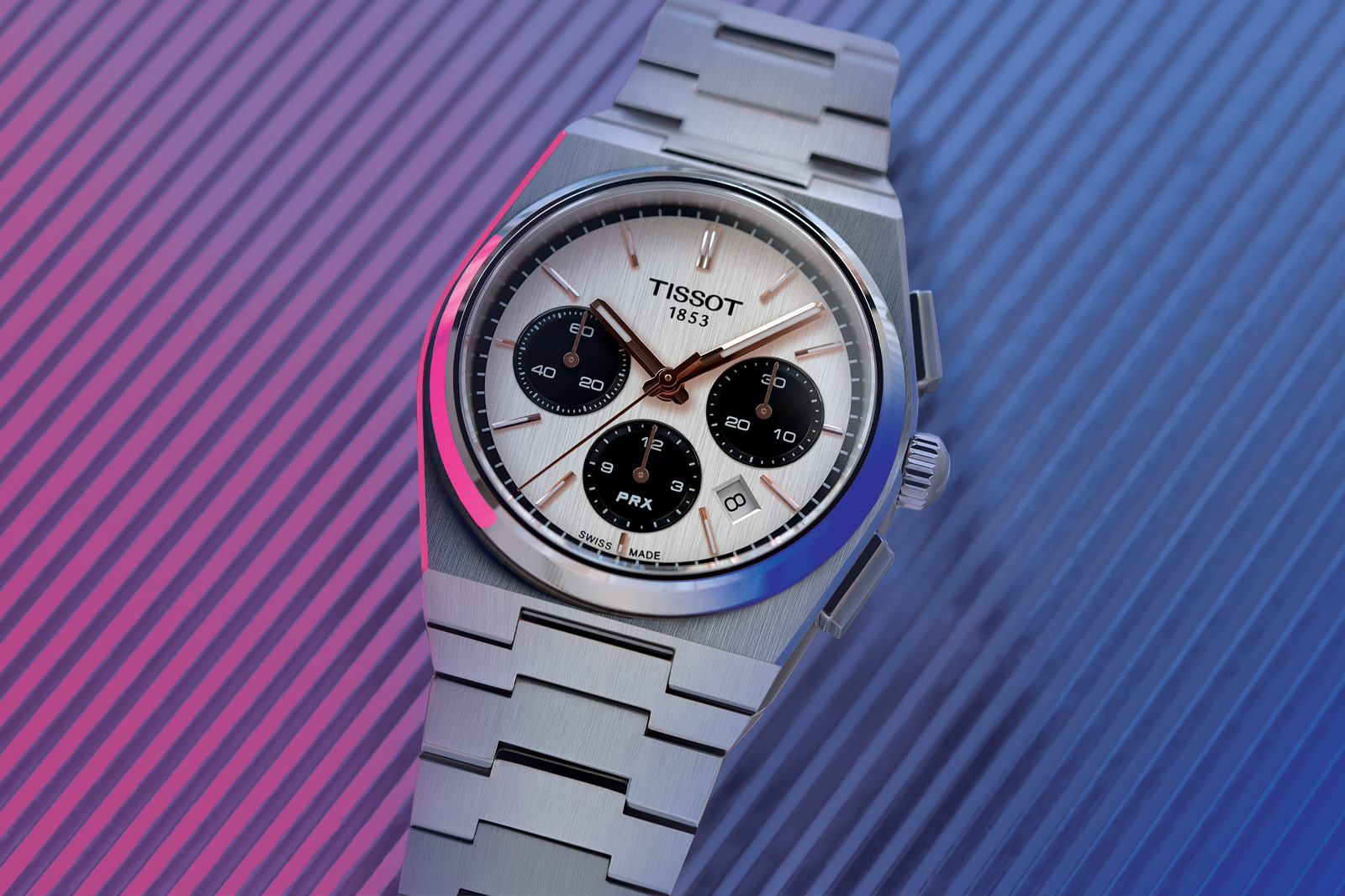 “I always knew we had to bring out a chrono,” says Dolla. “Chronographs are down right now but I believe they’re on their way to making a comeback, so I wanted to get ahead of the curve.” While it may be a little hard to get your hands on one, there’s no doubt that Dolla was right about that. The Chronograph has been almost as successful (if not as surprisingly so) as the 40mm. It’s not hard to see why.

While it might have a new complication, the PRX Chronograph is as retro as its predecessors, maintaining that angular 1970s aesthetic and phenomenal integrated bracelet. At 42mm it feels just a touch larger, though still svelte for a sports watch. More importantly, it’s still nice and slim, something that Dolla was insistent on: “If we couldn’t keep it slim I didn’t want to do it.” 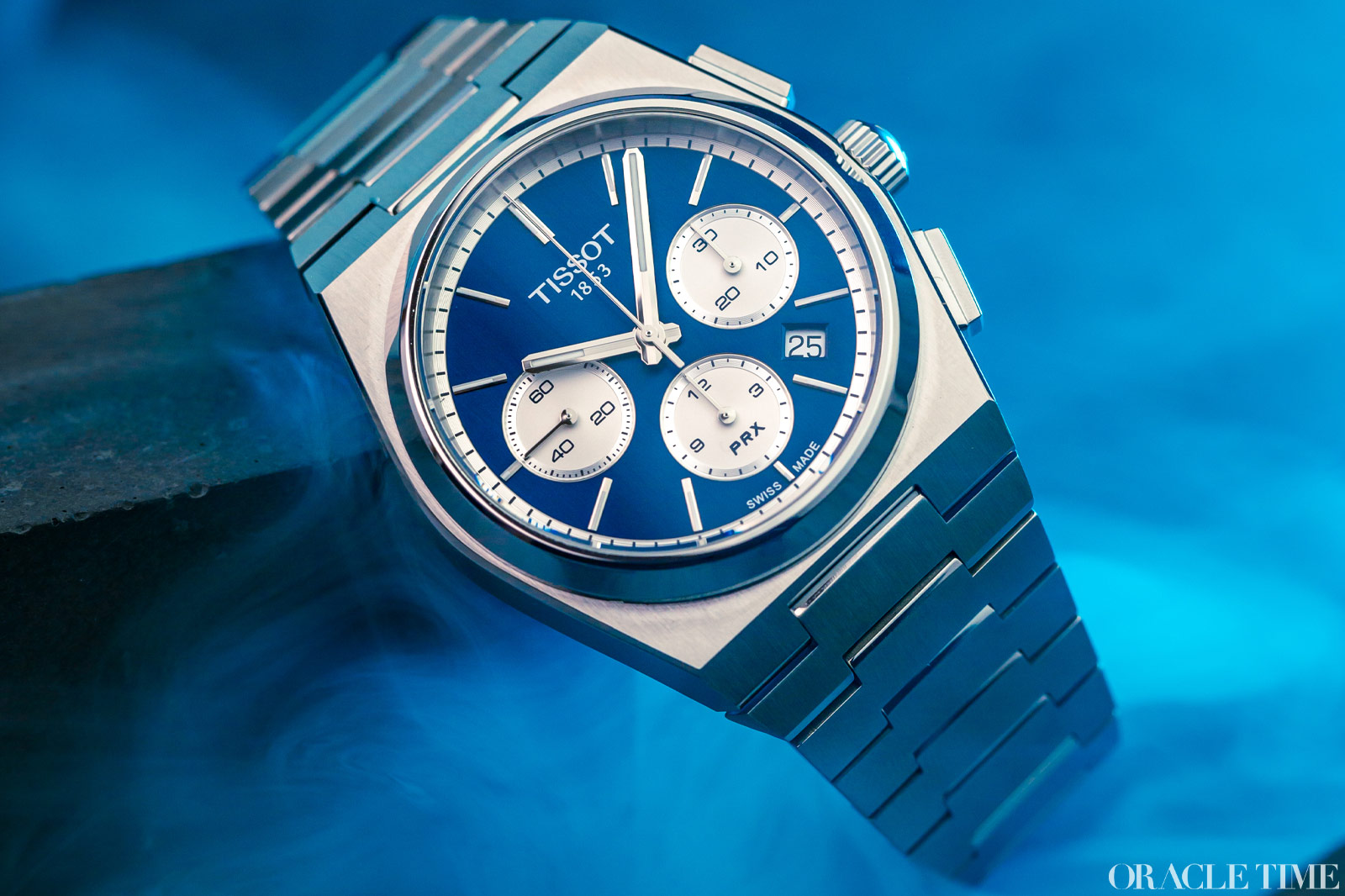 It’s an interesting angle, especially as the Chronograph was released alongside a smaller, 35mm version of the standard PRX, a nod to the original 1978 version. Where the latter is as faithful as a modern reimagining can be (given that we all prefer an automatic), the Chronograph looks and feels like a vintage ‘what if…’.

Things have changed on the dial too. Gone is the Genta-adjacent, streamlined finish in favour of a sportier nod to Paul Newman high-contrast subdials. It’s a racier look, the sort of no-brainer that comes with a retro chronograph. There are two versions, a black on white with rose gold indexes or the lovely (superior, in our opinion) version gracing the cover of our September issue (and above), with white on blue. Despite the blue being far darker in the metal than I’d expect, I’m a sucker for the combo. No matter the colourway you prefer, readability is king here. 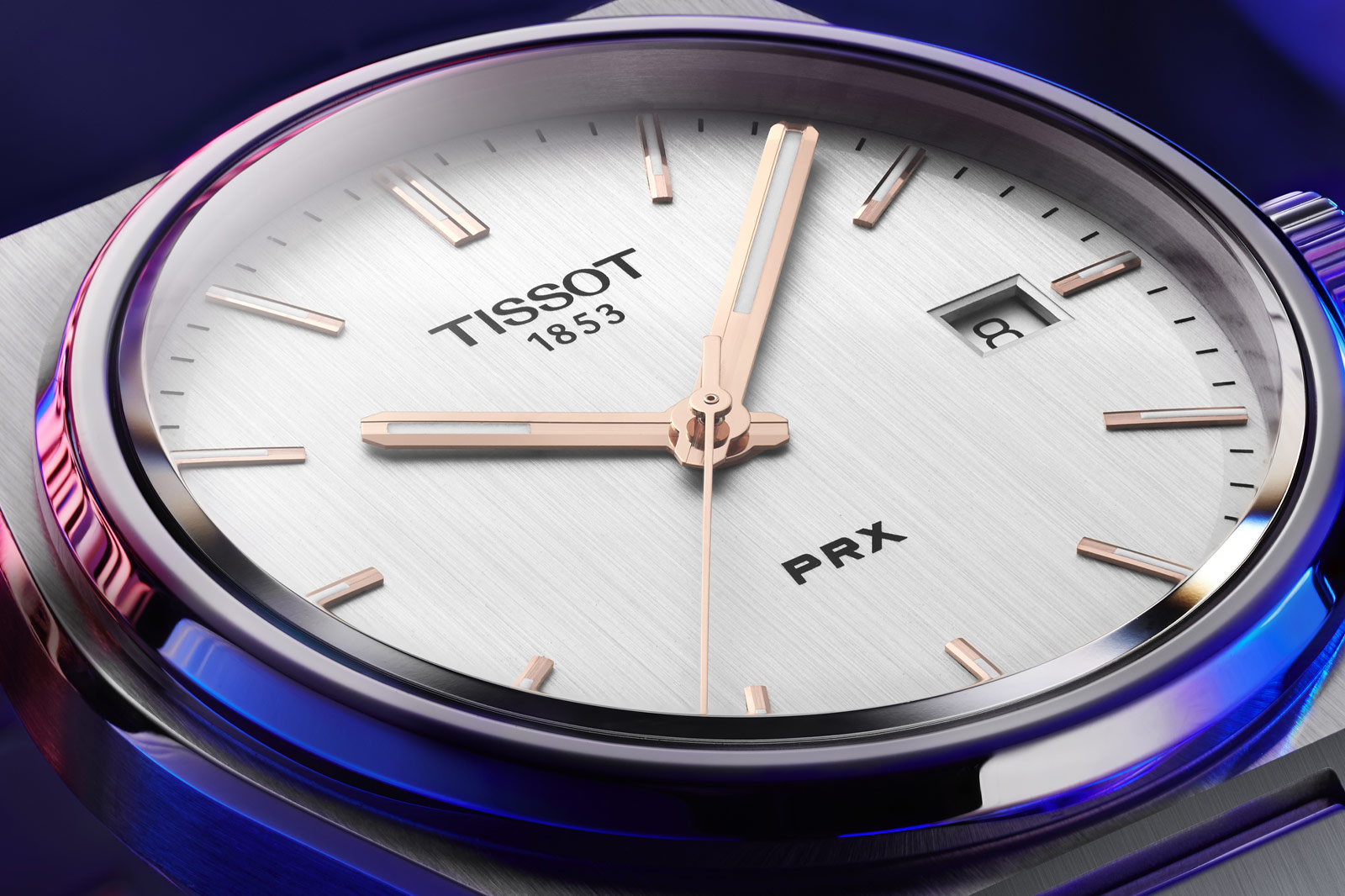 I’m glad Tissot didn’t opt for a tachymeter, despite the automotive tenets of a chronograph. The PRX collection is all about industrial slanted cool and the fewer numerals you can get away with, the better. And you really, really wouldn’t want to upset the balance of slim bezel, faceted case and clean dial that’s made the PRX as a collection the flagship it is.

That all said, there’s one thing that’s really helped the PRX find its audience over the last year-and-a-half: price. We’ve alluded to accessibility aplenty, but what does that actually mean? Well, the PRX automatic 40mm will set you back £565. Nobody can argue with that. The PRX Chronograph is a big jump up to £1,500. 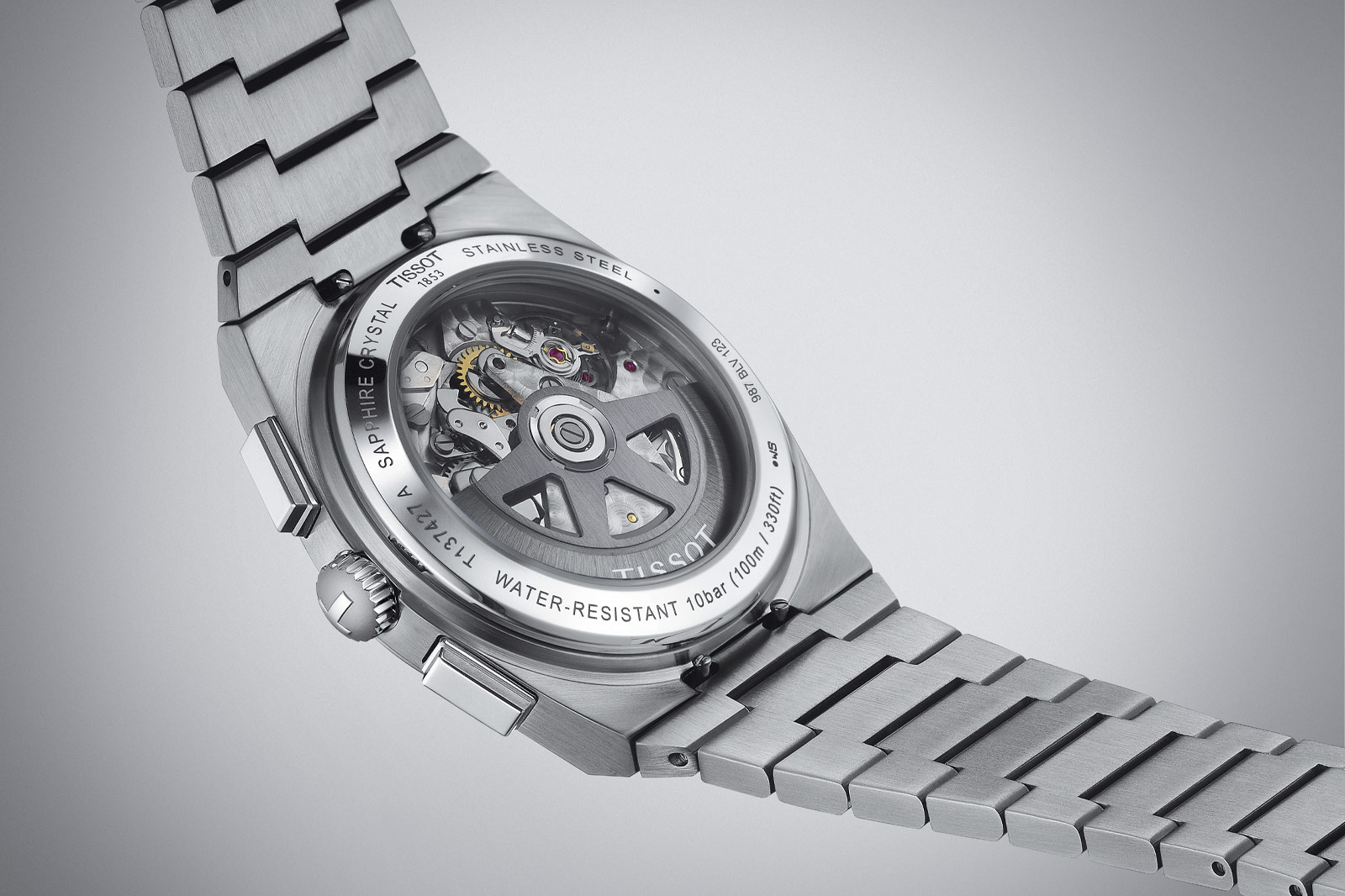 The reason isn’t just the addition of a chronograph; it’s the switching out of the Powermatic 80 in favour of a lovely movement that’s a favourite of Dolla’s: “I’m a big fan of the Valjoux movement,” he says. It’s also now visible through a sapphire caseback, which pushes the PRX Chronograph from vogueish bullseye to something a little more horologically refined for the watch nerds looking beyond hopping on a trend.

So, what does all this mean for the PRX collection as a whole? Well, Dolla evidently has plenty of plans for the collection, but not so as to overshadow the rest of Tissot’s collections, the impressively specced Seastar and the big-in-Asia Bellissima. Indeed, Tissot as a whole has been streamlining its release slate. According to Dolla, “we cap yearly references now. Previously we had at least 150 a year, now it’s 99 at most, we don’t want to dilute our offering.”

So, expect a few riffs on the theme (given current trends maybe a big splash of colour) rather than anything particularly cutting edge. Whatever crops up, it’ll be cool, it’ll be affordable and, unless Tissot manages to scale up, a bit of a wait to get hold of it.