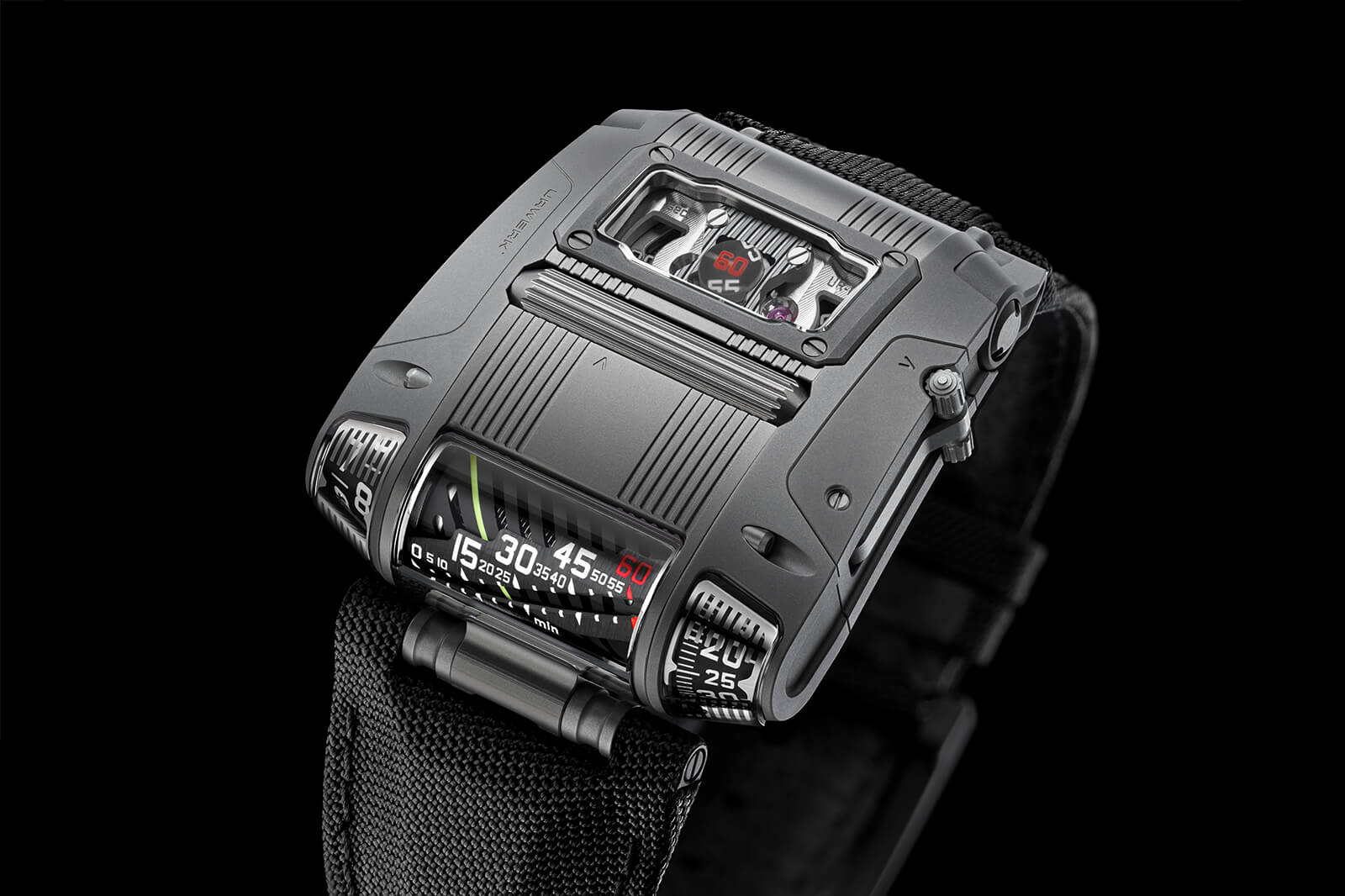 We’ve been waiting for this. After months with just their insane, nuclear clock-powered watch winder, a shiny new Urwerk is finally here and you guessed it: it’s awesome. Introducing the UR-111C.

Saying it’s unlike any Urwerk before is a tad redundant. Pretty much everything those guys do is new, even by their standards. The only thing you can always rely on is a head-spinning level of mechanical complexity. Even by those standards the UR-111C is next-level, which is oddly ironic given that it’s one of the most conventional to read.

Shaped like a driving watch with the time display on the side rather than the top, the minutes and hours can be read on the right and left reels respectively. It’s simple, clear and a world away from Urwerk’s usual satellite hours. 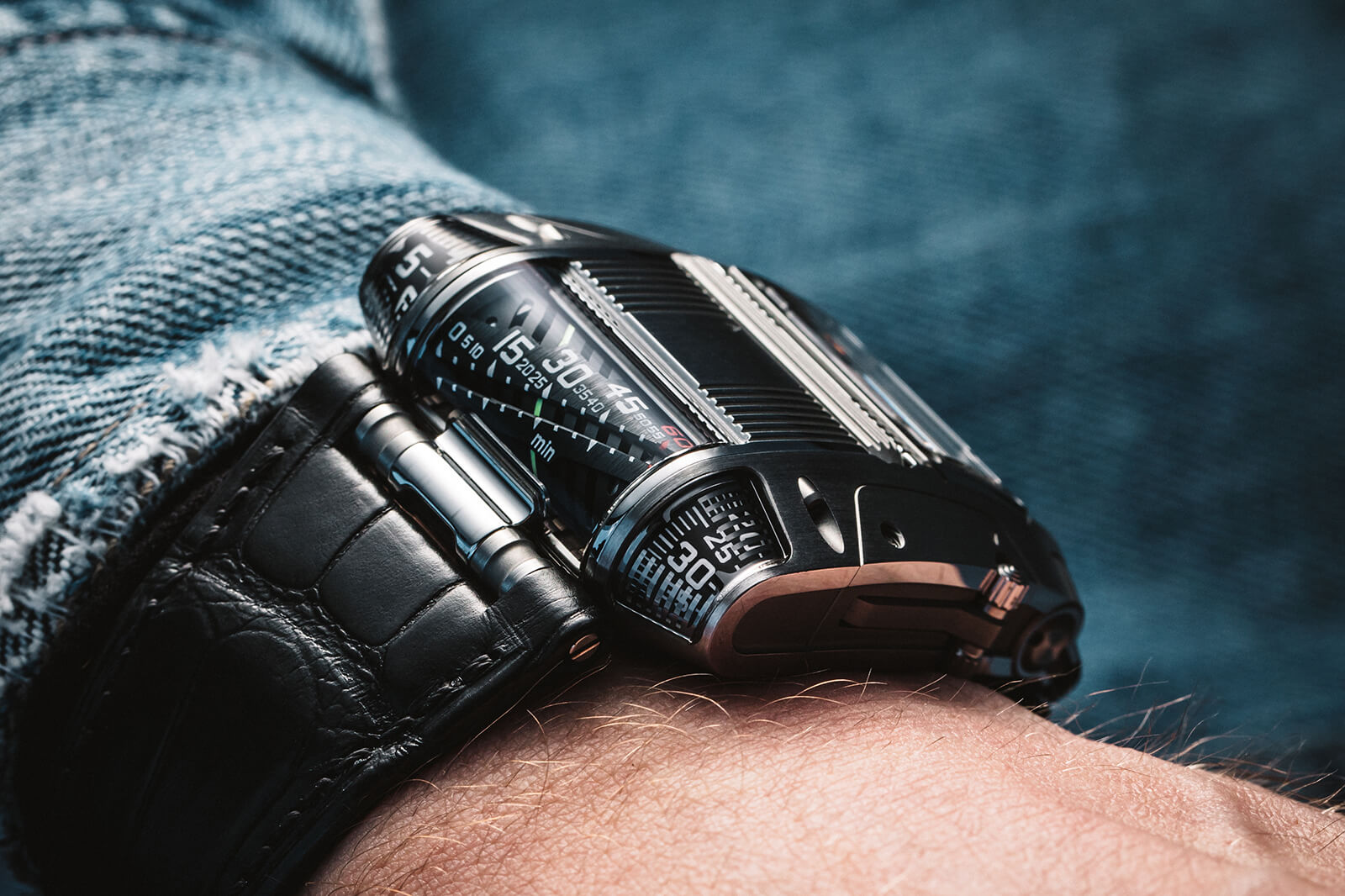 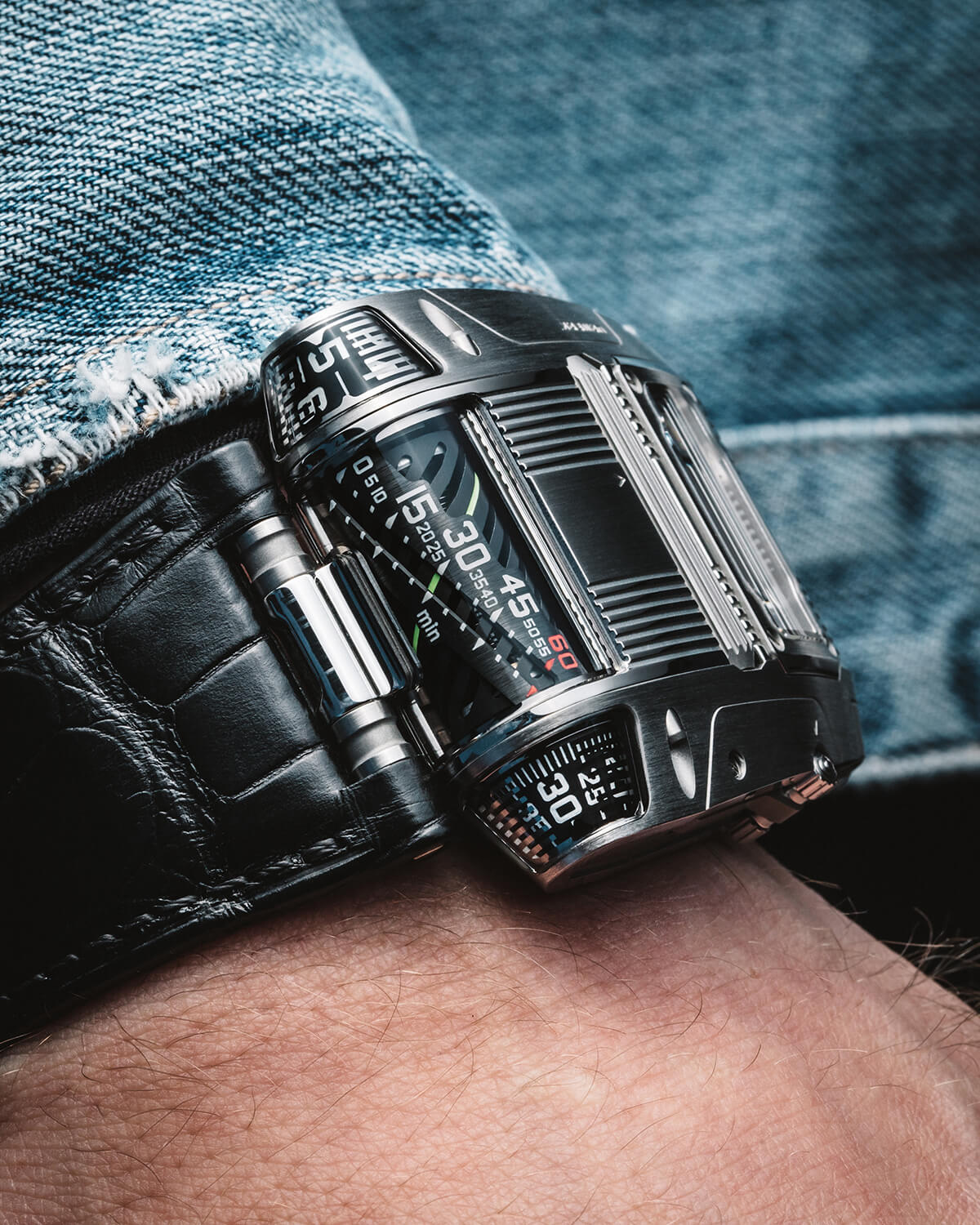 On the other hand (or lack thereof) there’s also a linear minute indicator on the face like the grill of a car. A yellow line on what looks from the front like a black corkscrew, shows the correct minute on a linear display. It’s redundant given the alternate indicator, but then this is Urwerk. Their entire take on haute horology is wonderfully, bizarrely pointless. It’s why we love them.

Seconds are even more interesting. On the top of the watch there’s a magnified window displaying the seconds in five-second intervals. So far so standard. Except that the indicator is made of two sets of numbers that flawlessly alternate under the window. Oh, and that’s not even a magnifying glass; that would be too easy. It’s an ‘image conduit’, a cluster of optical fibres. 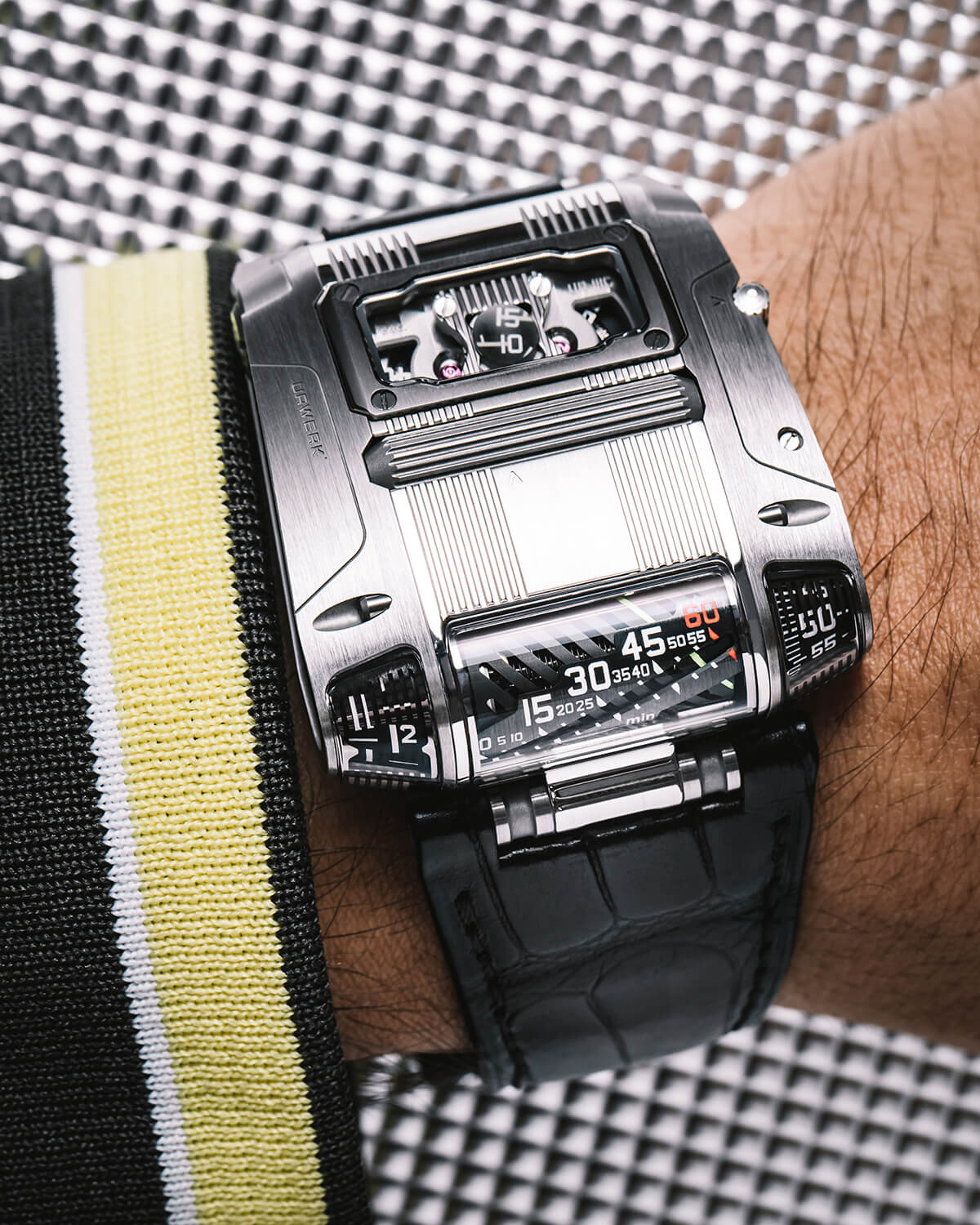 The big, machined cylinder next to the seconds is actually the crown. As is, it winds the watch; otherwise you can flip up the side lever to use it to set the time. It’s big and chunky like a piece of retro tech, like you’re seriously interacting with the movement.

As a watch the UR-111C easier to understand than to explain, especially when you see it in action, but then that’s par for the course for Urwerk. Still, the appeal of the watch isn’t all mechanical. It’s typically big and, if there’s any costume designer there working on a dark sci-fi concept, they might want to sit up and take notice. 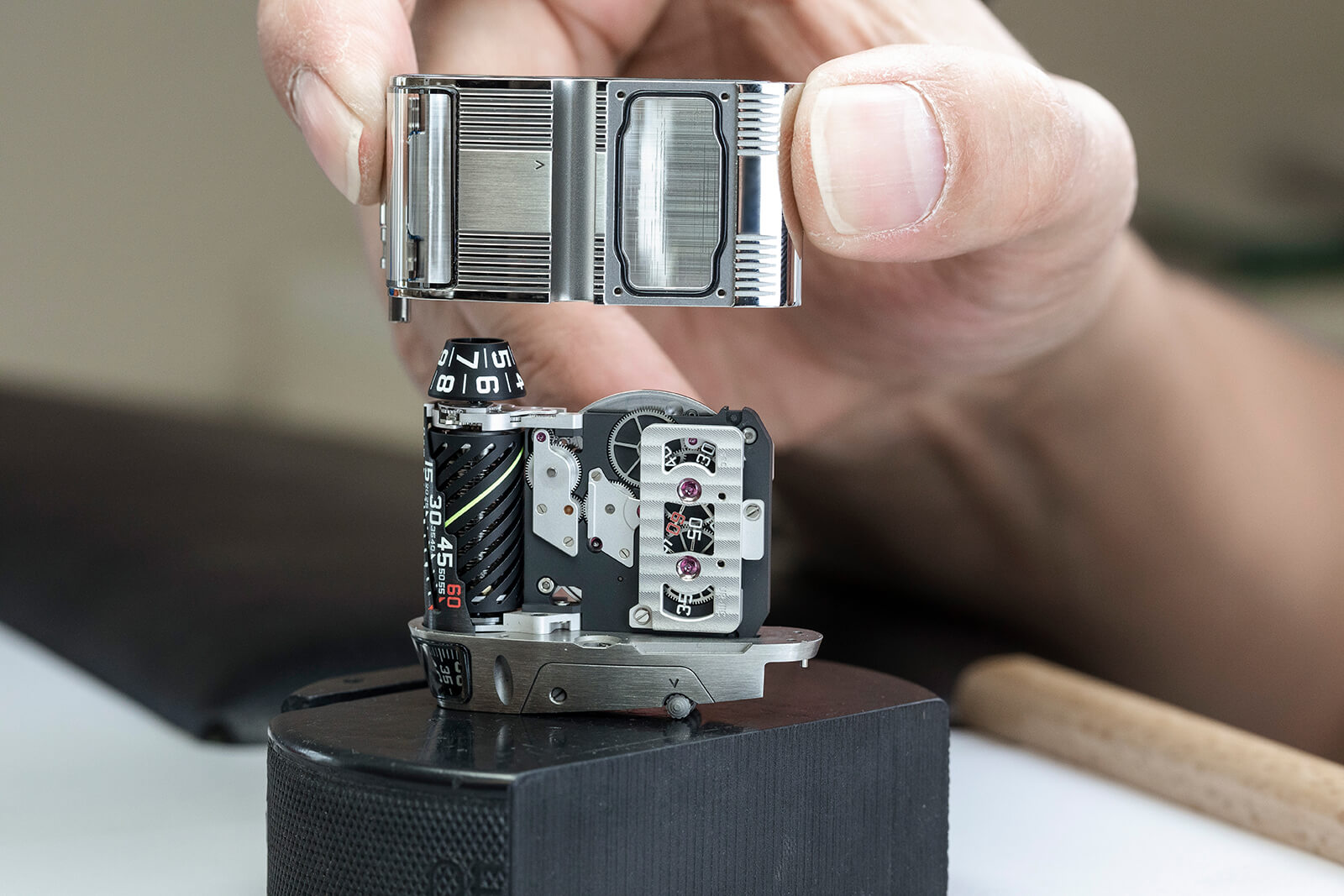 We may have been waiting a while for something like the UR-111C to come along but we haven’t been disappointed. Now the wait begins to actually wear one.