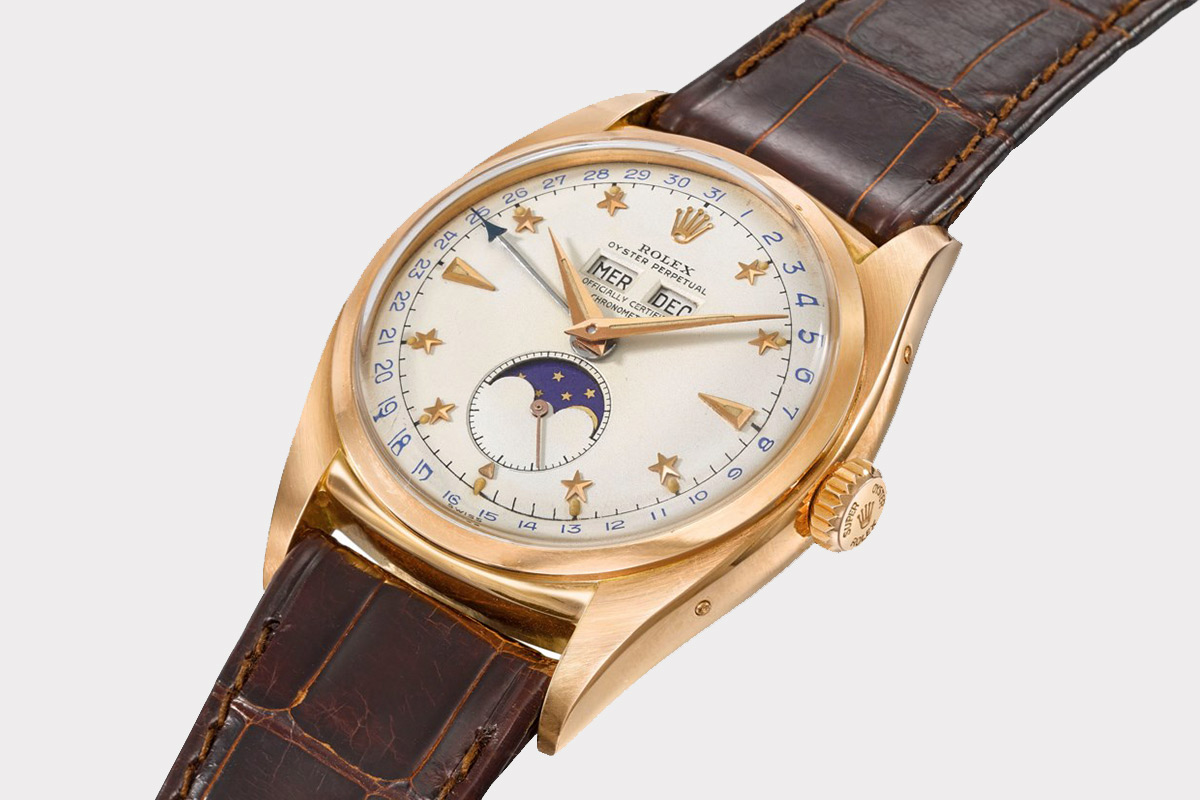 Where better in the world to head for a watch auction than Geneva? And who better to wield the hammer than the auctioneering giant that is Christie’s? Put the two together and you have one of the most anticipated annual watch auctions in the world: The Christie’s Rare Watch Auction.

Held mid-May at the Four Seasons des Bergues, the sale is not a small one. Christie’s has evidently leant on its selling reputation to collect some serious lots ahead of the big day. There will be a grand total of 254 pieces up for sale, running the full gamut of eras, styles and watchmakers, not to mention ranging from accessible vintage to grail-level collector’s items.

Let’s be honest though, we’re only really interested in the latter – the pieces that will inevitably steal the show. Well, the three flagship lots would be able to steal pretty much any show.

The first is, of course, a Rolex. It has to be, doesn’t it? The Rolex in question isn’t your usual Newman Daytona or Double Red but a bit of an odd duck. Dubbed the Stelline, the 1950s 6062 has a triple calendar with moon phase and a stunning star dial. Not only was this one of only two calendar moon phase models from the period, this is one of only ten estimated to have this particular dial. Even among devotees of Rolex sports watches, this is going to cause a stir. With an estimate of anywhere from CHF 1,000,000 – 2,000,000, it’s definitely the star lot. Pun totally intended.

The Stelline isn’t the only calendar of note; just below it in the estimates is a 1977 Patek Philippe 2499, estimated at a cool CHF 500,000 – 800,000. The reference was the backbone of Patek’s grand complications for 35 years and this particular piece is from the third series. It’s not as rare as a first, but it’s still a singular timepiece. After all, only ten were made for each of those 35 years.

If that’s not quite rare enough for you, there’s a bit of a steal in the pocket watch category: A pocket watch owned by Patek Philippe co-founder Antoni Patek. It was one of the first two-train independent centre seconds movements to be built and is estimated at just CHF 50,000 – 100,000.

Back to watches and the final lot at the top is from one of our personal favourite classical watchmakers, Vacheron Constantin. The five-minute repeater in question was actually a bespoke order built in 1956 so don’t expect to see another one popping up any time soon. The estimate for this unique piece is CHF 200,000 – 400,000 which to be honest seems a little low given its one-off nature.

There are plenty more lots to look at of course – about 250 more – so you’re sure to find something your collection needs. Just make sure that, on 13 May, you don’t rush through your budget before the big pieces come out to play. The Christie’s Rare Watch Auction lives up to its name; don’t expect to see these pieces again any time soon. More details at christies.com