Madonna appeared in the music video for 1986’s Papa Don’t Preach wearing a t-shirt that read ‘Italians Do It Better’. One assumes she was talking about wedge-shaped car design. That decade saw some of the most exotic-looking cars ever produced come out of Italy’s ateliers and supercar factories. It was a golden era for those who like their motors brash, sexualised and neck-snapping even at standstill. They seemed to be made less for the open road and more to make a statement when pulling up outside a neon-fringed nightclub. Whether rendered on a teenager’s bedroom wall or in real life, these cars were four-wheeled fantasies of a flashier universe. 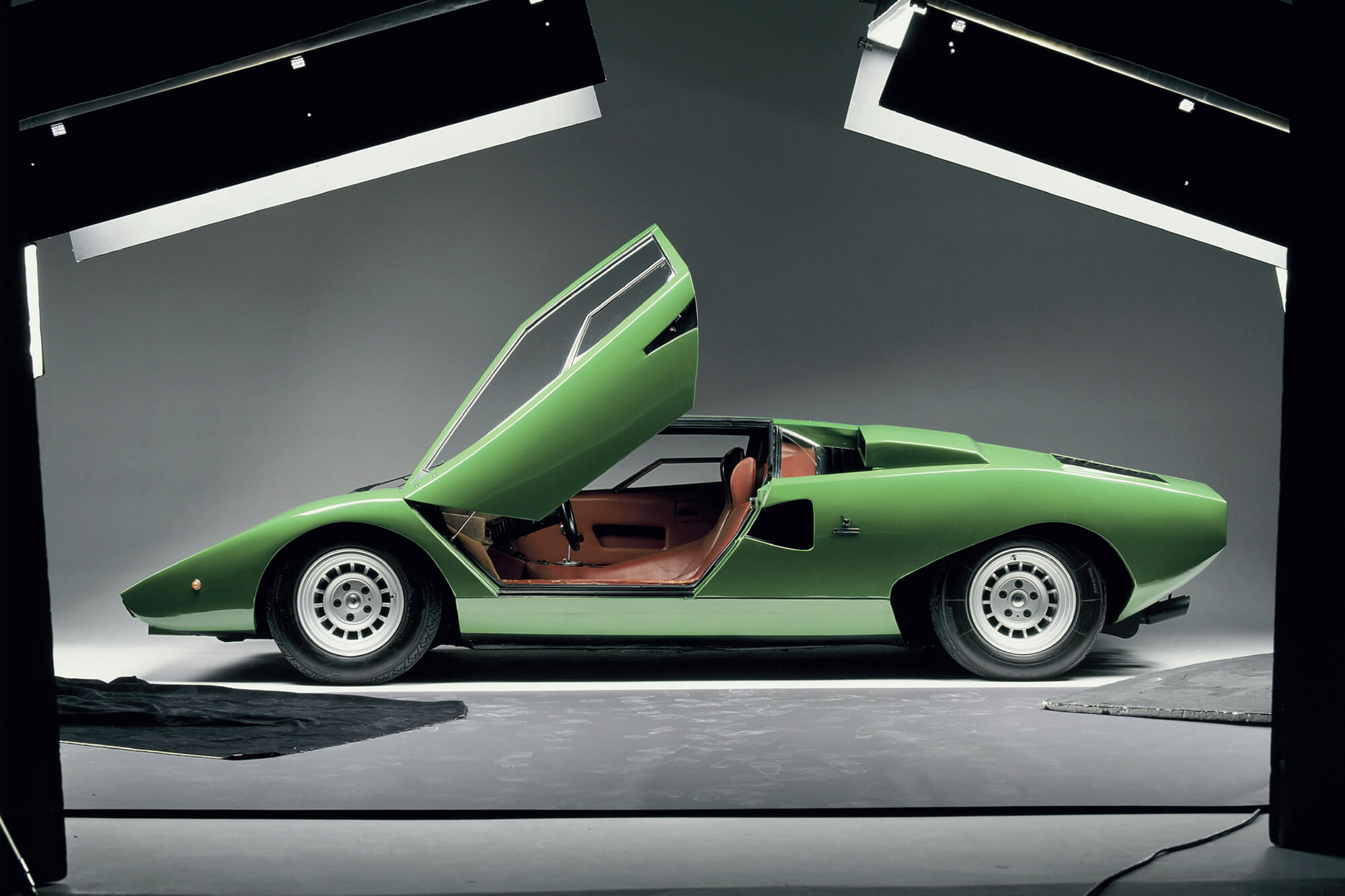 Lamborghini birthed this aesthetic movement. The Marcello Gandini-penned Miura, which was released in 1966, is considered the world’s first supercar. In 1971, the same team created the Countach (translated from Italian, this word essentially means ‘whoa!’ or ‘crikey!’). Gandini and his employer Bertone had been experimenting with angular and geometric design language in a series of concepts for Lamborghini, Alfa Romeo and Lancia, and, to the amazement of everyone, Lambo actually green-lit the Countach and rolled it out for production in 1974 barely changed from that first LP500 concept. 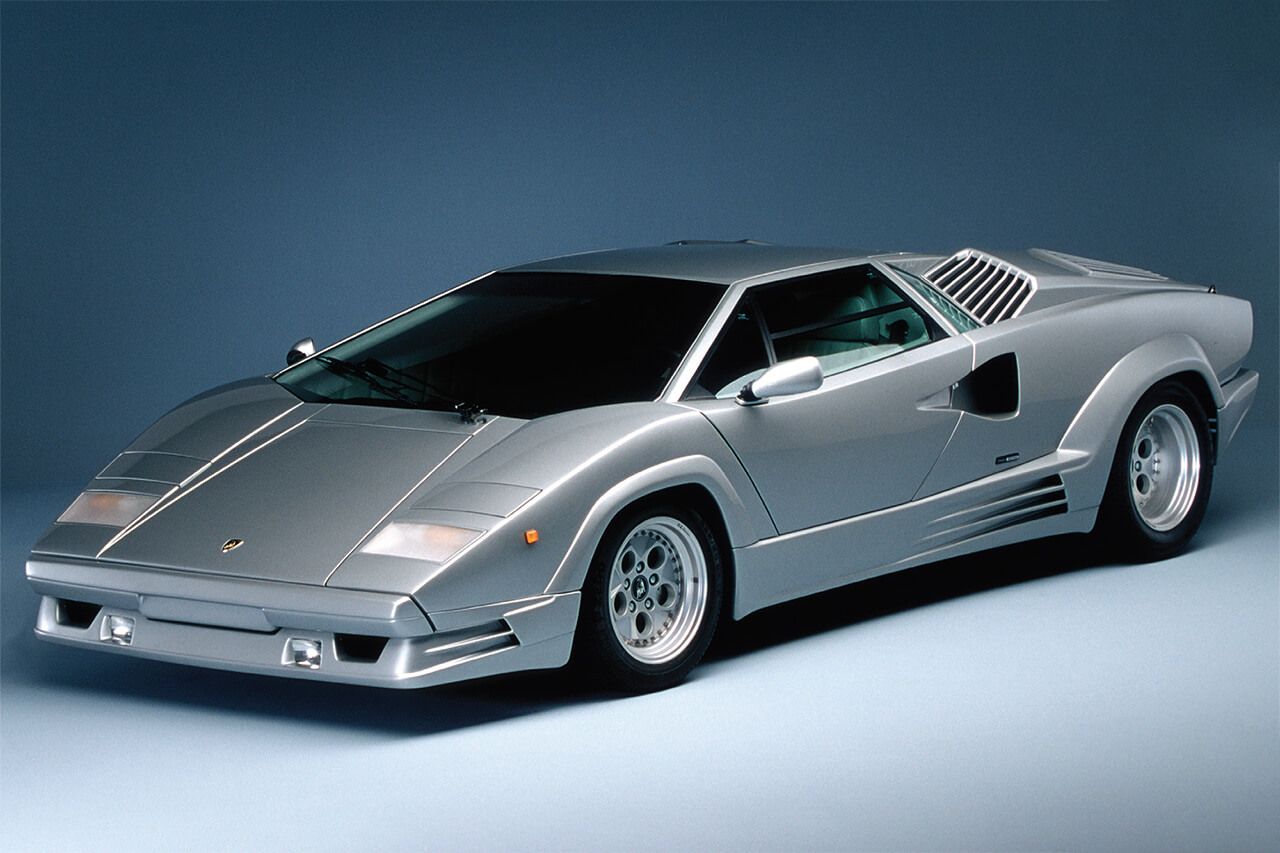 An icon of the era, the Lamborghini Countach was a fixture on teenage bedroom wall in the 80s.

In the 1980s, it grew a rear wing and a more powerful V12. Horacio Pagani was called in in 1988 to sharpen it further to celebrate the car company’s 25th anniversary. In 1990, the Countach was replaced by the Diablo, a design which was basically a cosmetically reduced re-badging of a remarkable 16-cylinder machine that had emerged two years earlier. 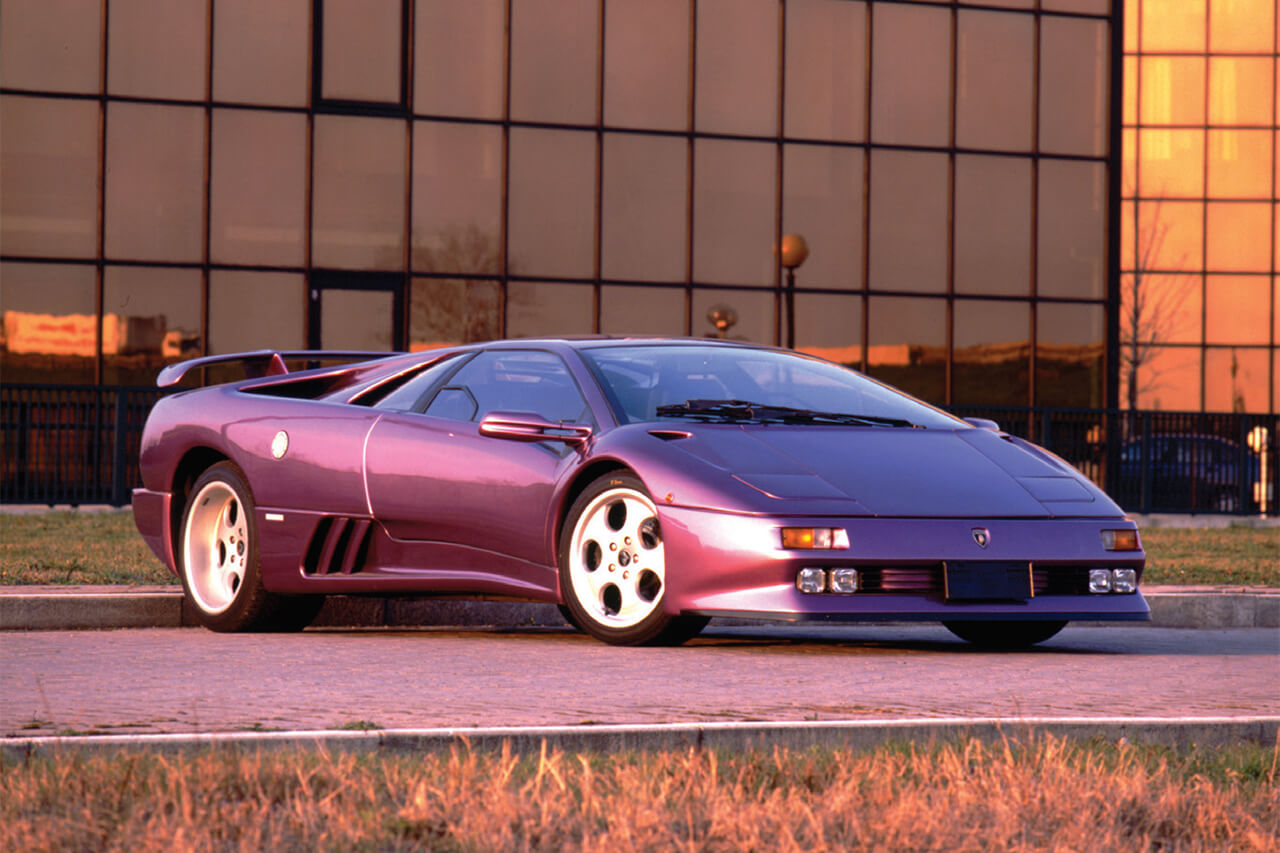 The Cizeta-Moroder V16T, of which just 11 were produced, is a solid pub quiz question for petrolheads. Again, it was a Gandini piece of art. It was meant for Lamborghini, but the Sant’Agata manufacturer (then owned by Chrysler) set about softening his work and Gandini threw a fit. The V16T was developed by a bunch of ex-Lambo employees, led by Claudio Zampolli, whose initials C.Z. became ‘Ci-Zeta’. 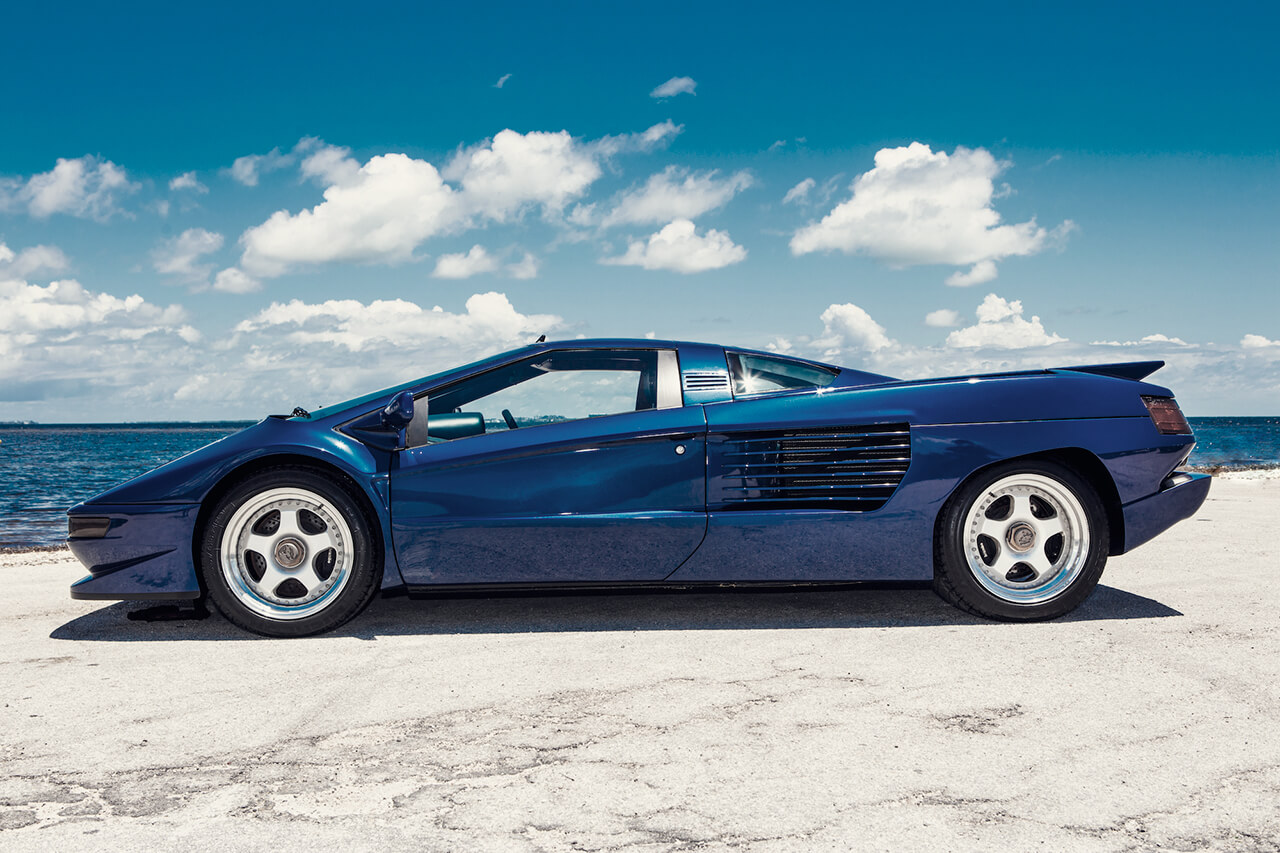 The Moroder part of the title is especially cool: Giorgio Moroder, the electronic music god, financed the venture. That’s right, the man who helped create disco and composed the score for Scarface had his very own synth-supercar company.

The V16T turned out to be its only product. With a top speed of 204mph and a 0-62mph time of just four seconds, it was powered by two Lamborghini Urraco flat-plane V8s stuck together and mounted transversely between the back of the passenger seats and the rear axle, summoning 540bhp. At $650,000, this and every other figure attached to it made the V16T absolutely unbeatable in games of Top Trumps. The Cizetta’s straked side air conveyors were a familiar 1980s Italian signature. 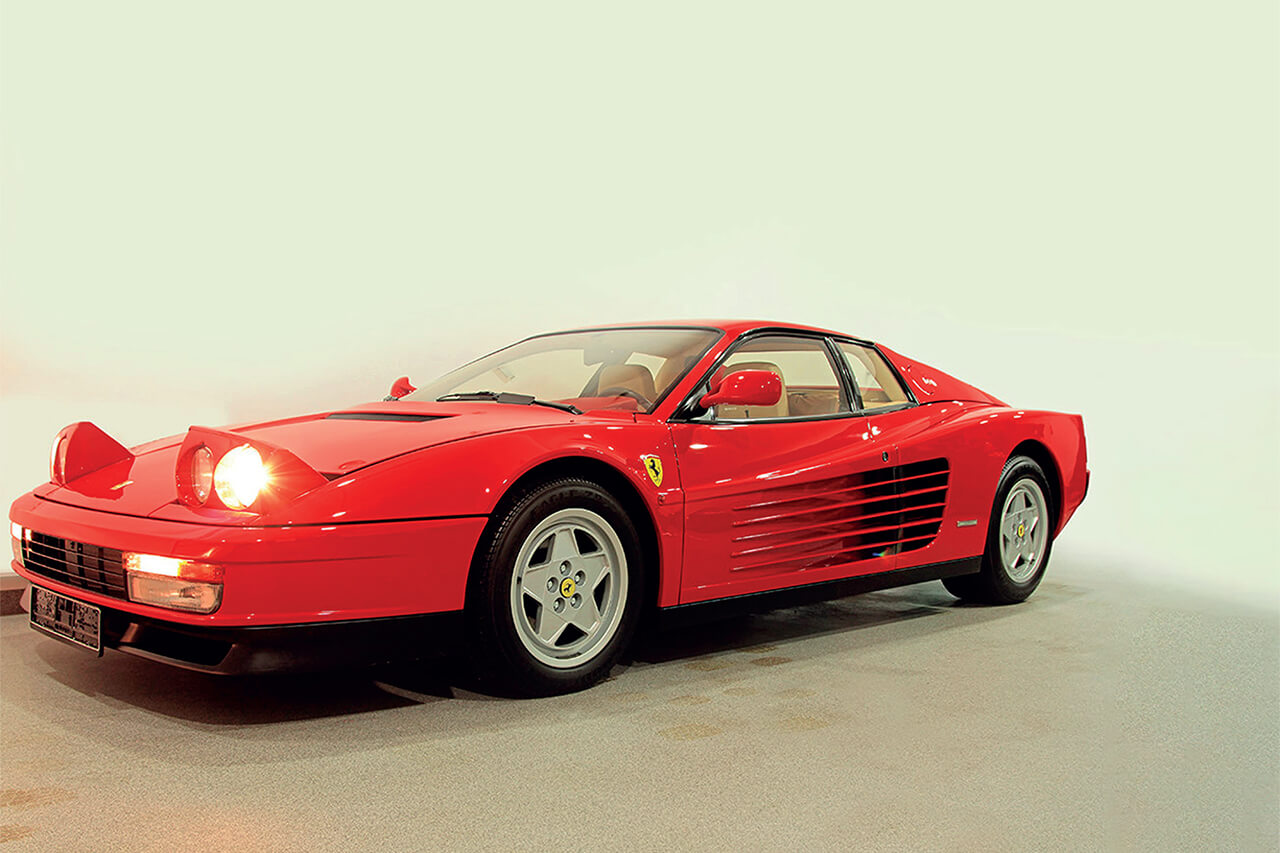 Of all the Ferraris of that decade, the one that caught the imagination the most was the Testarossa. Drawn by Pininfarina, it debuted at the 1984 Paris Motor Show and was hailed as the most beautiful car there. The name with which it was christened means ‘redhead’ and refers to the scarlet-painted cam covers on its flat 12-cylinder engine. Those strakes on the side were as much about form as function, a statement piece which became known as a ‘cheese grater’ or ‘egg slicer’. Its volume and graphics emphasise width and drama, and its aerodynamics were extremely low-drag. 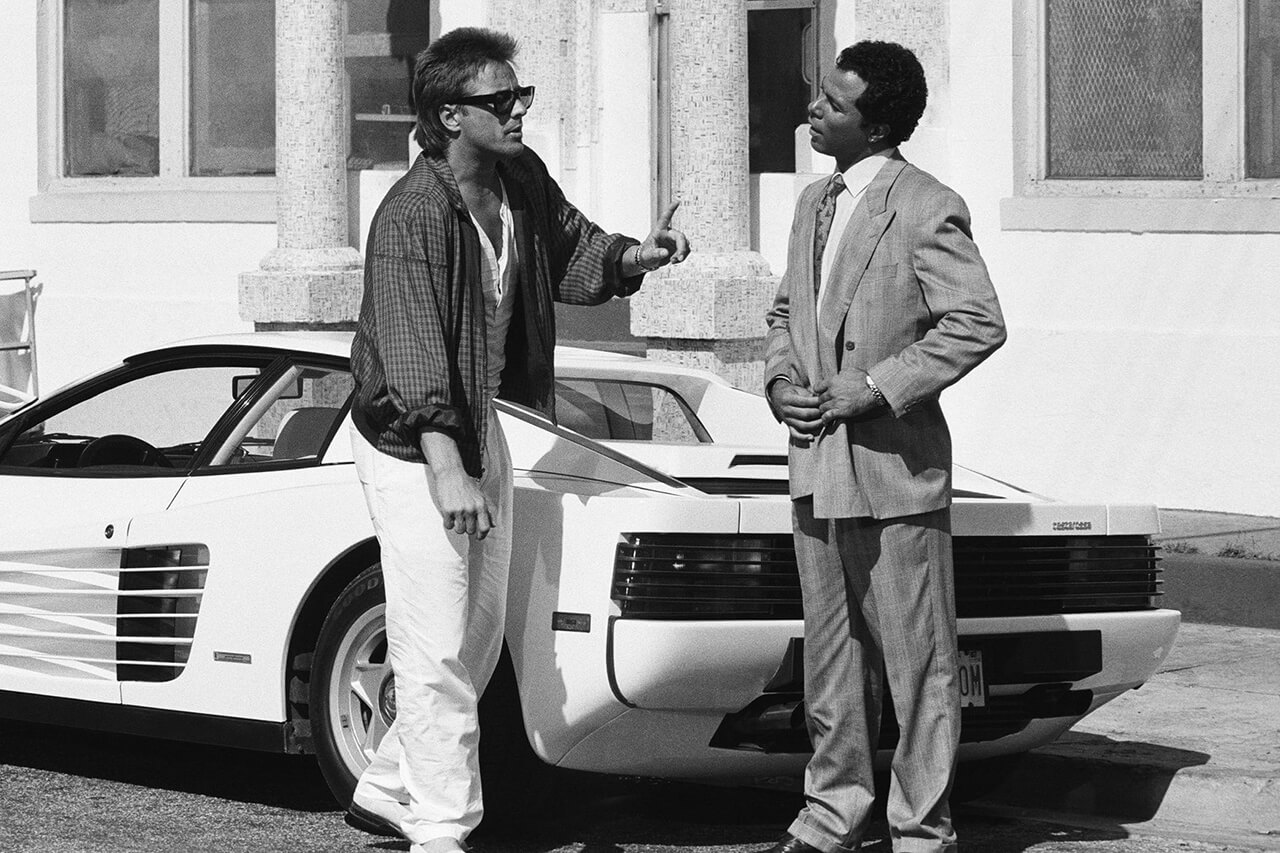 The Ferrari Testarossa driven by Don Johnson in Miami Vice.

Famously, a white one appeared in Miami Vice and its star Don Johnson, and show-runner Michael Mann, drove Testarossas off-screen, as did O.J. Simpson, Rod Stewart, Michael Jordan and M.C. Hammer. It also appeared in the arcade game OutRun, cementing its place in pop culture for a generation. Compared to Enzo Ferrari’s earlier stable, this Testarossa seemed a little uncouth and overtly commercial, but then the 80s were all about cashing in.

The rosso corsa OutRun car was, those with a keen eye may recall, a convertible. Ferrari only ever made one Testarossa Spider, a silver-coloured gift to Fiat chairman and style icon Gianni Agnelli. It had a solid silver emblem on the bonnet, instead of aluminium, in a nod to its periodic table symbol of the first two letters of Agnelli’s surname. It was sold by the family in 2016 for $1 million. 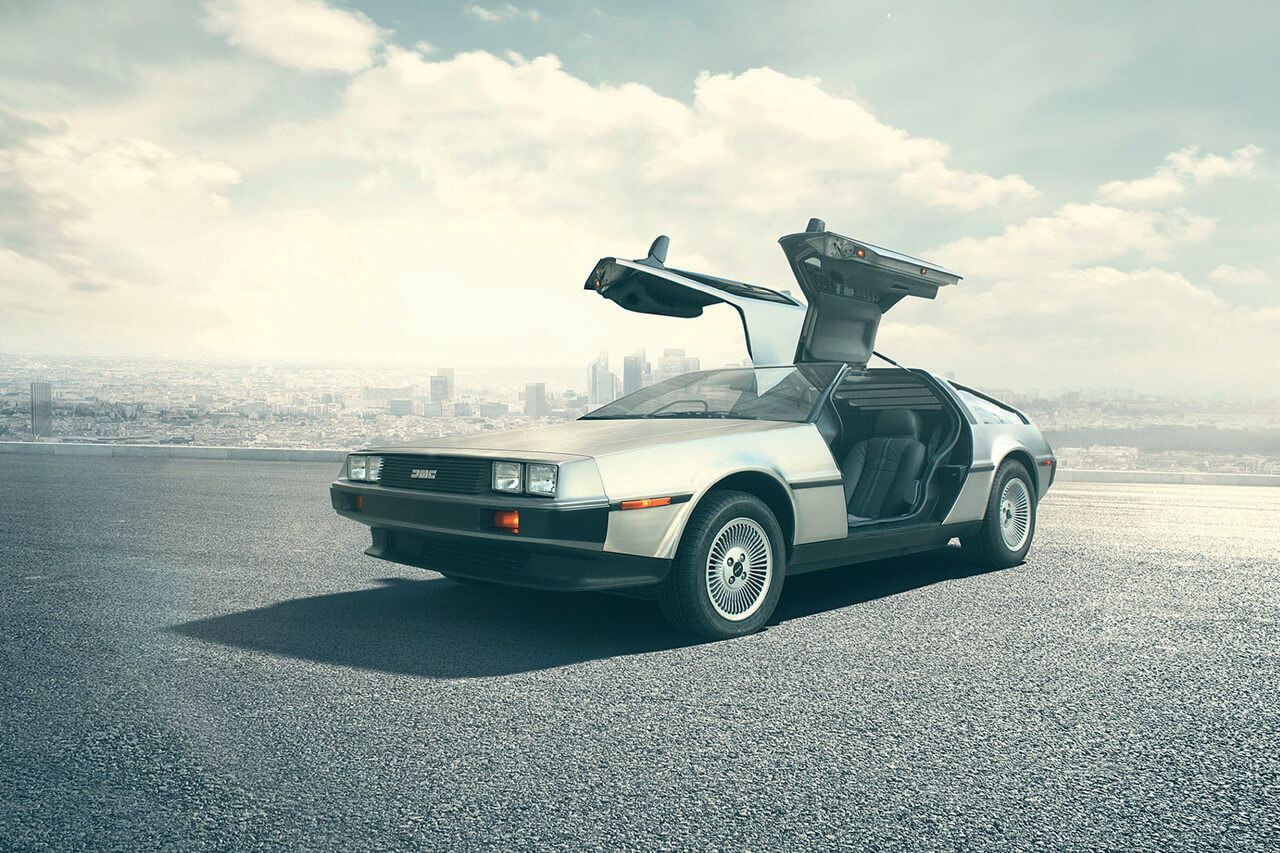 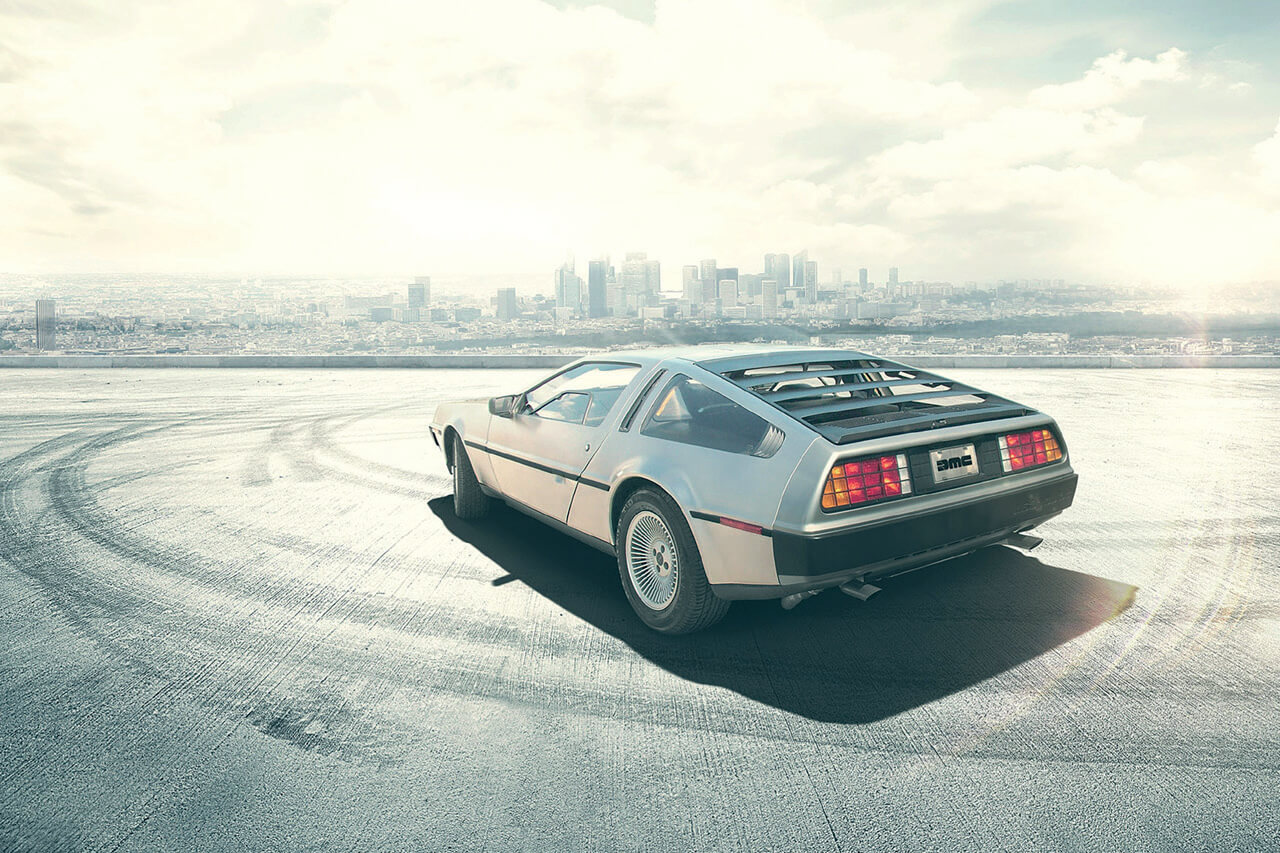 The DeLorean is a central fixture of the Back to the Future films, but its Italian design has been somewhat lost to history.

Aside from the Testarossa and Countach, when one recalls eye-catching cars from the 80s one inevitably thinks of the DeLorean from Back to the Future. DeLorean was an American company which built its total 8,975 cars in Northern Ireland. But it was Giorgetto Giugiaro who designed it. The Italdesign man, who was also responsible for the Lotus Esprit and BMW M1, caused a sensation when he unveiled its brushed stainless-steel body, which everyone joked must be cleaned with a Brillo pad, and gull-wing doors from the pages of science fiction.

The De Tomaso Pantera outlasted all of these cars, from 1971-1992, and seemed to take all the best bits from this era. This was a true Italian muscle car, designed by Ghia’s Tom Tjaarda, and you can almost smell the cologne just from looking at it. And now it has been reinterpreted and reborn for the 2020s courtesy of Modenese coachbuilders Ares Design. 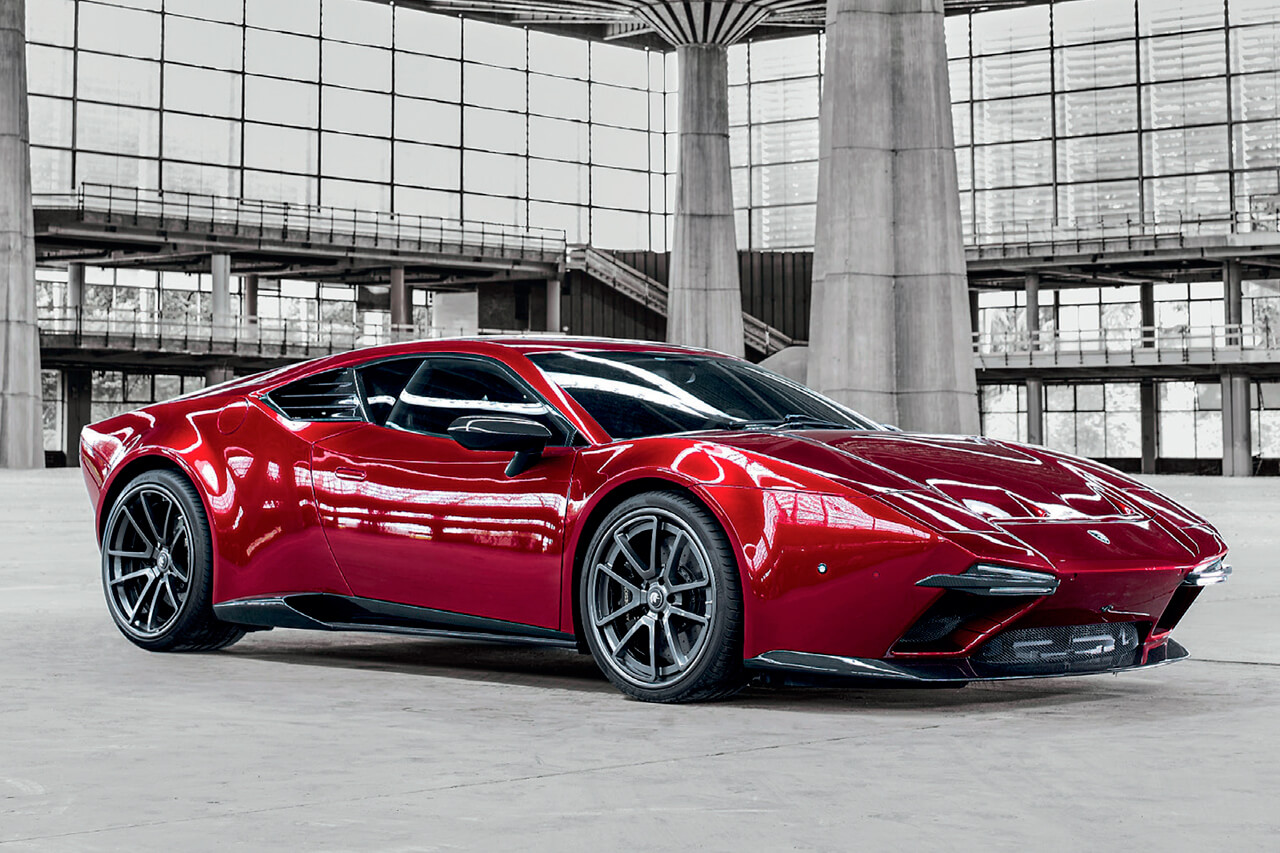 The Ares Panther ProgettoUno is a reimagined Lamborghini Huracan in a carbon-fibre body.

A customer who owned two Panteras went to CEO Dany Bahar and asked if he could build a reboot without the De Tomaso’s bad habits, namely an urge to kill its driver. The result is the Ares Panther ProgettoUno; a Lamborghini Huracan clothed in an all-new but evocative carbon-fibre body which pays homage to the Pantera in a way that’s contemporary, yet fused with the spirit of retro hairychested Italian car couture.

Ares charge £375,000 plus the cost of a donor Huracan, but the ProgettoUno is the most exclusive car here – even more so than the Cizetta-Moroder. Looking good doesn’t come cheap, and if you want to live out your teenage dreams without sacrificing modern technology then look no further. And remember to roll up your suit sleeves.

If our deep-dive into the high-octane world of Italian supercars has you lusting after a taste of 80s and 90s engines then never fear, we have you covered. Whether it’s the bull, horse or plain old horsepower, there are plenty of insane motors available to buy right now. Well, what else are you going to do with that wasted holiday money anyway? At least this way your UK road trip’s are going to be a hell of a lot more fun. 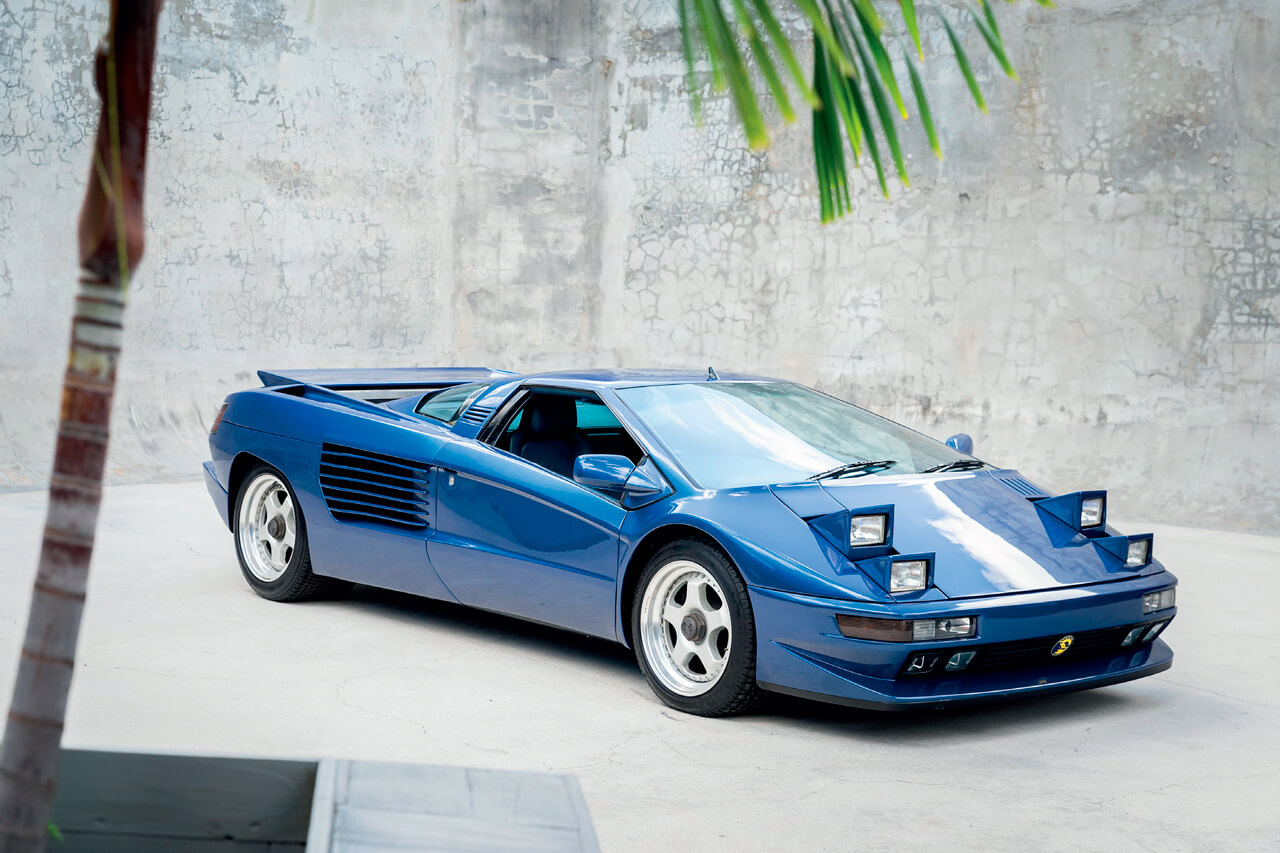 The ultimate 90s baby, only nine of these things were ever built. It was designed by Marcelo Gandini, the man behind the Lamborghini Diablo among others and is one of the rarest motors in the world. This, chassis #101 is arguably the finest of them all, and was shown at the 1993 Geneva Auto Show. You can find out more about the Cizeta-Moroder in the previous article, but as far as buying one is concerned you just need to know this: if you do give in a request a price, it’s going to be a serious wad of cash. As it’s a once-in-a-lifetime buy, but even then it’ll be tempting.

Price on request from Curated. 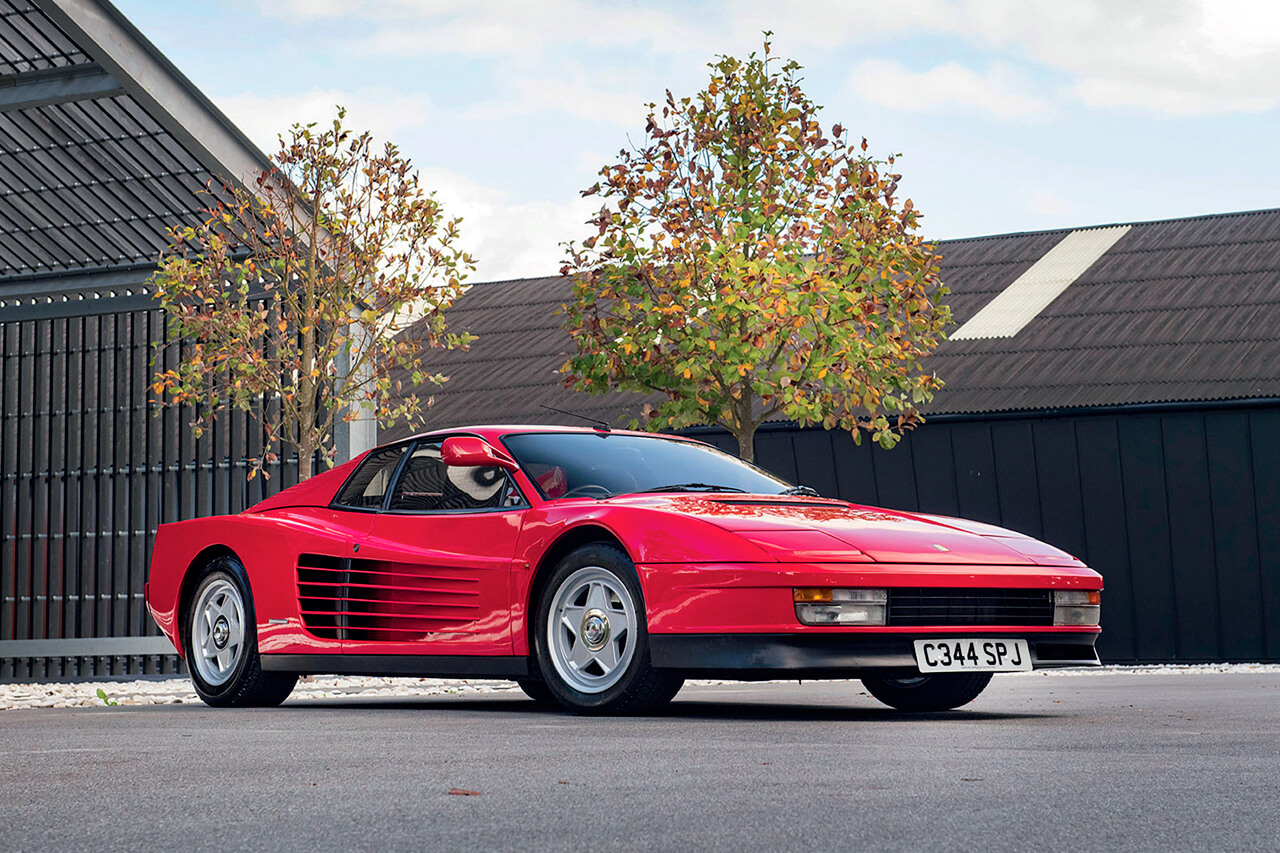 The Testarossa would be a head-turner even if it weren’t in bright Ferrari red. As it is, this is the most collectible version of the legendary car, and with only 24,000 miles and one owner from new, is a lot of car for the money. With its cheese-grater side strakes it’s a lot less restrained than earlier Ferraris, but then that’s why we love the 80s, isn’t it? Unlike most of the decade though, the Testarossa’s aged very well indeed. 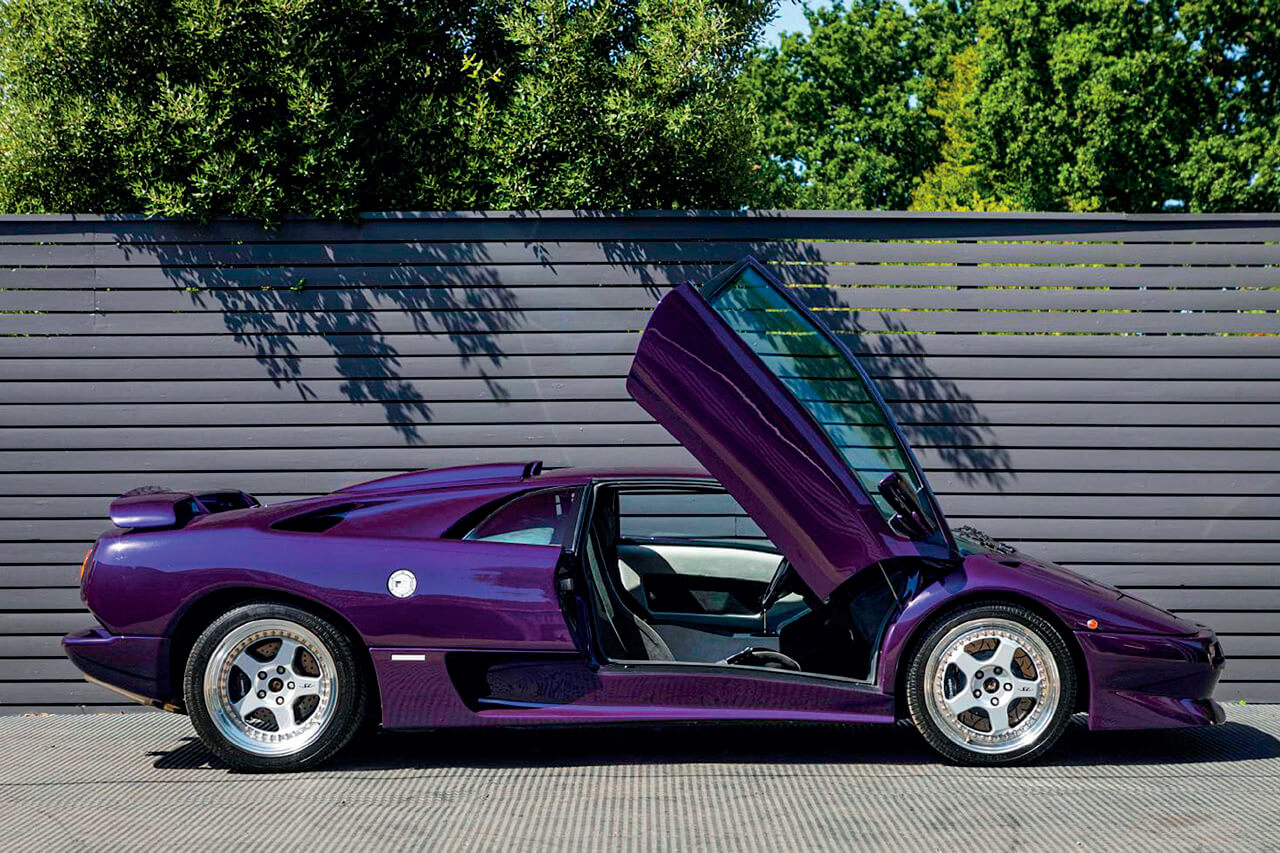 The 90s successor to the Countach, the Diablo’s one of the more accessible Lamborghinis out there while still looking about as mean as they come. This particular number was created for display at the London Motor Show in 1996, so has some serious provenance – and a seriously cool paint job to match in Speziale blue. The first Super Veloce since the Miura SV over two decades previously, this is the ultimate form of the Diablo – and for a reasonable price, too.

In the watch industry, it’s easy to lose perspective when it comes to price, however, its often the...

We get hands-on with the new Raymond Weil Freelancer Diver Geneva Special Edition with its lake...