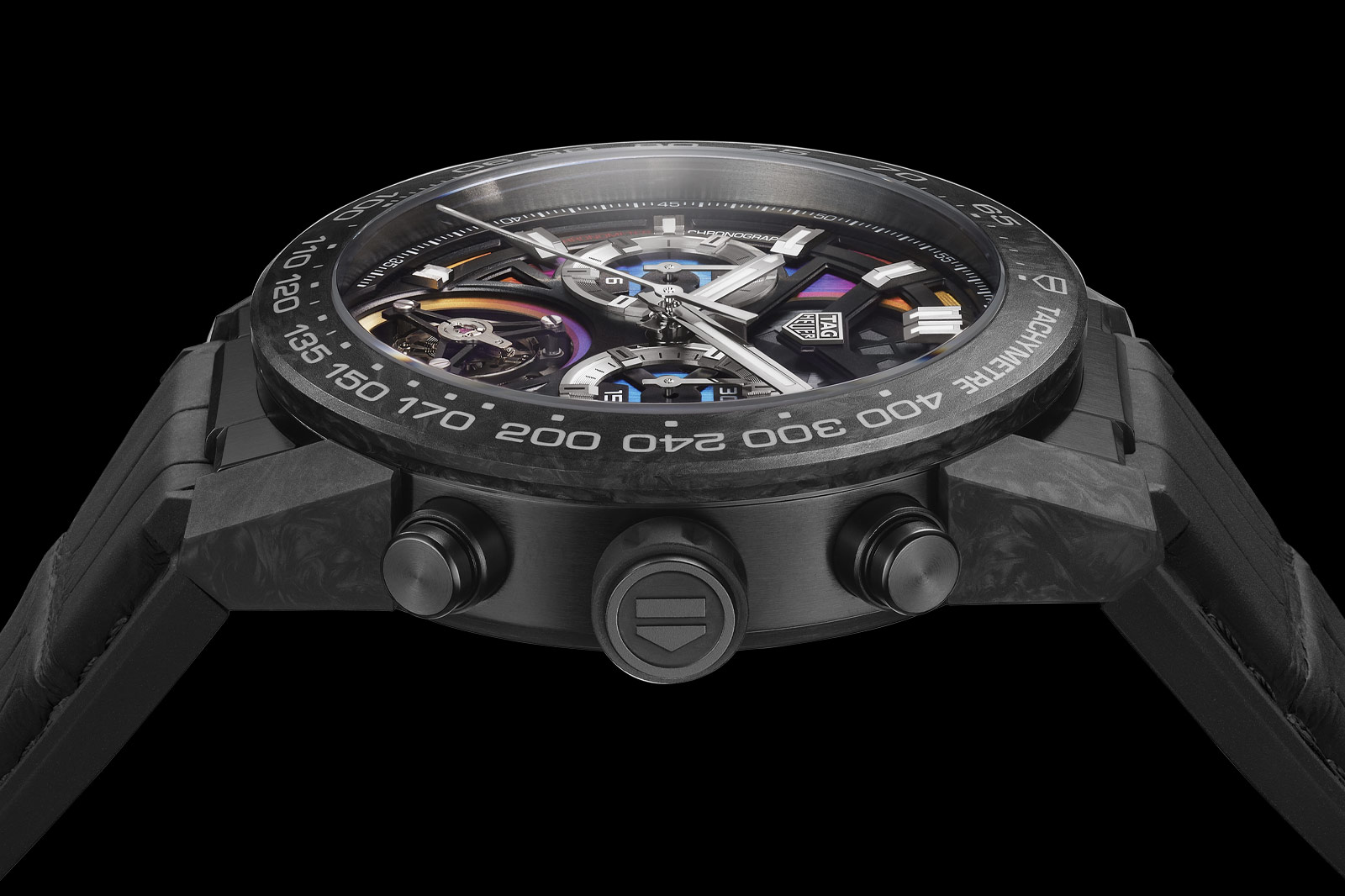 In classic fashion, you wait ages for a new Tag Heuer Carrera Chronograph Tourbillon and then two come along in the space of a month. First was the Mario Kart Limited Edition, that reimagined the watch alongside some of the most popular video game characters on the planet. Now though, Tag Heuer have launched the Carrera Chronograph Tourbillon Polychrome Limited Edition, a more serious interpretation touting cutting edge finishes and high tech materials. 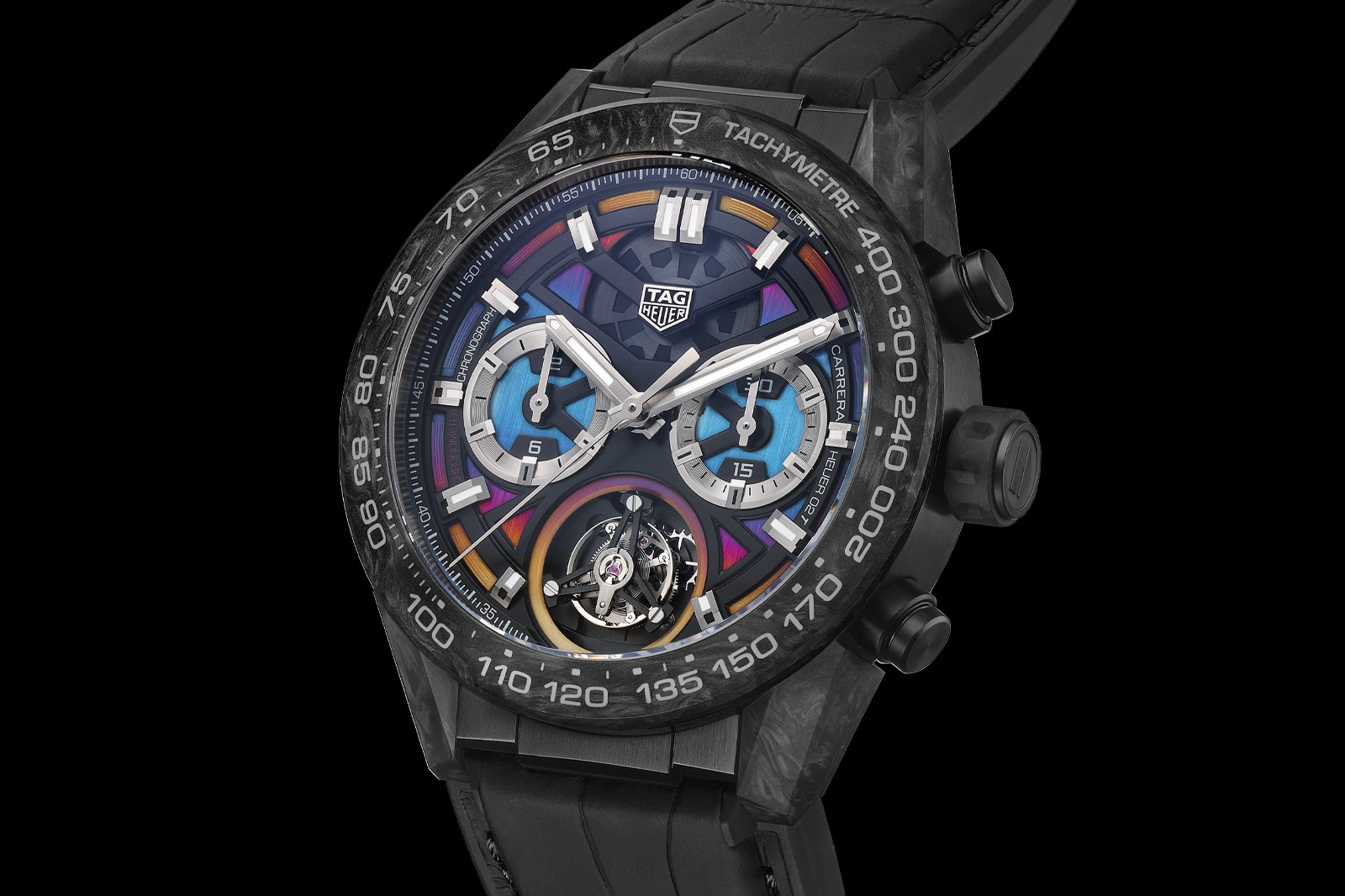 Like the Mario edition, the Polychrome has a 45mm diameter case made from titanium, although there are a few crucial differences. The case for the Polychrome is far more angular, creating a sharper aesthetic that suits the black PVD finishing and carbon fibre bezel, both of which are also updated features. Building on that is the sapphire crystal with a domed shape and bevelled edges. 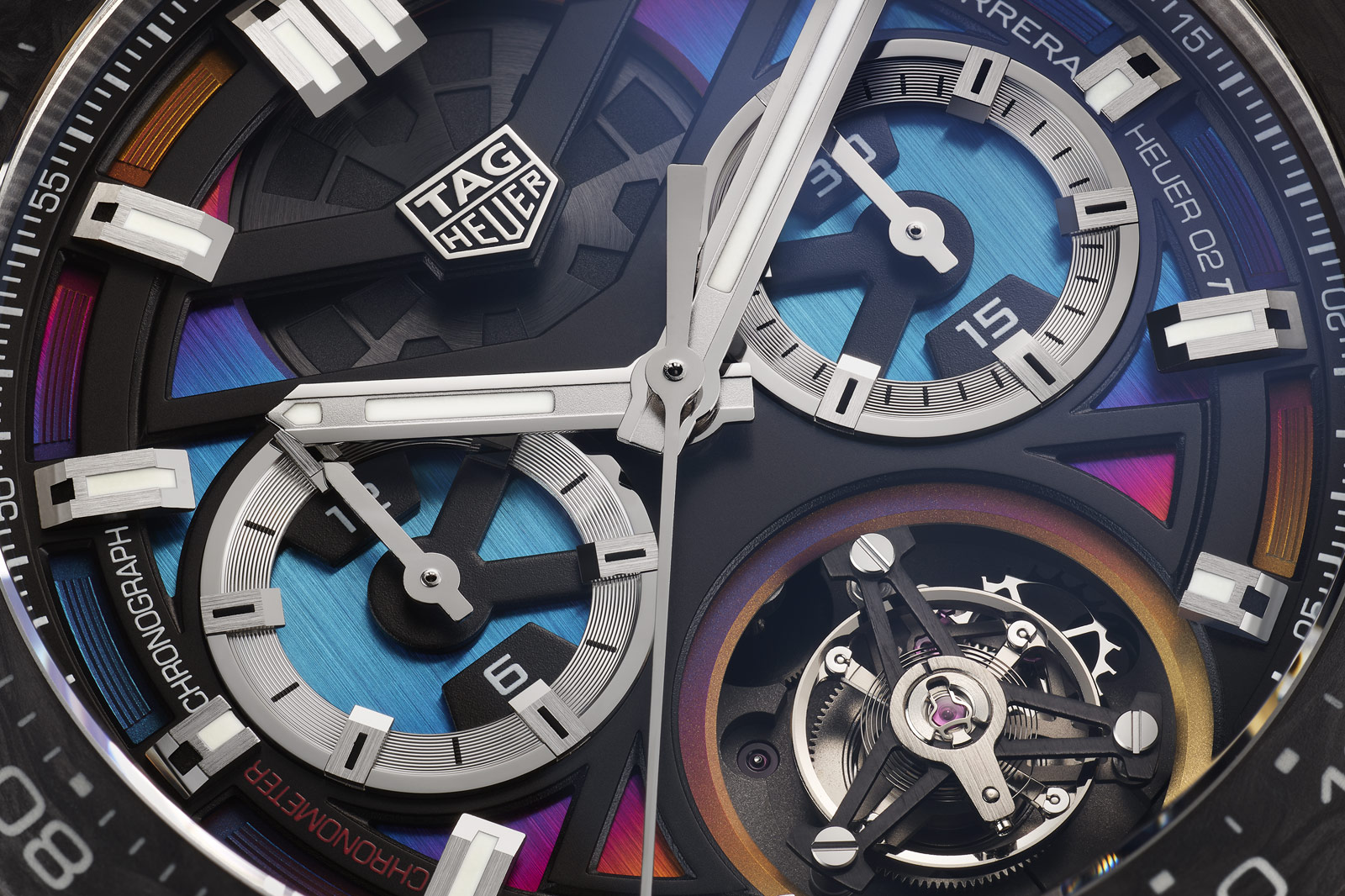 However, while the case, bezel, crown and pushers are all black, you can hardly call this model stealth because the dial is as eye-catching as they come. It’s laid out in a traditional tricompax chronograph style with a 12-hour subdial and 30-minute subdial at 9 and 3 o’clock respectively, flanking the open heart tourbillon at 6. All three elements have bright silver coloured elements with plenty of rhodium plating to be found, matching the hands and hour markers. Yet, the most striking portion of the dial is actually the areas surrounding the functions. 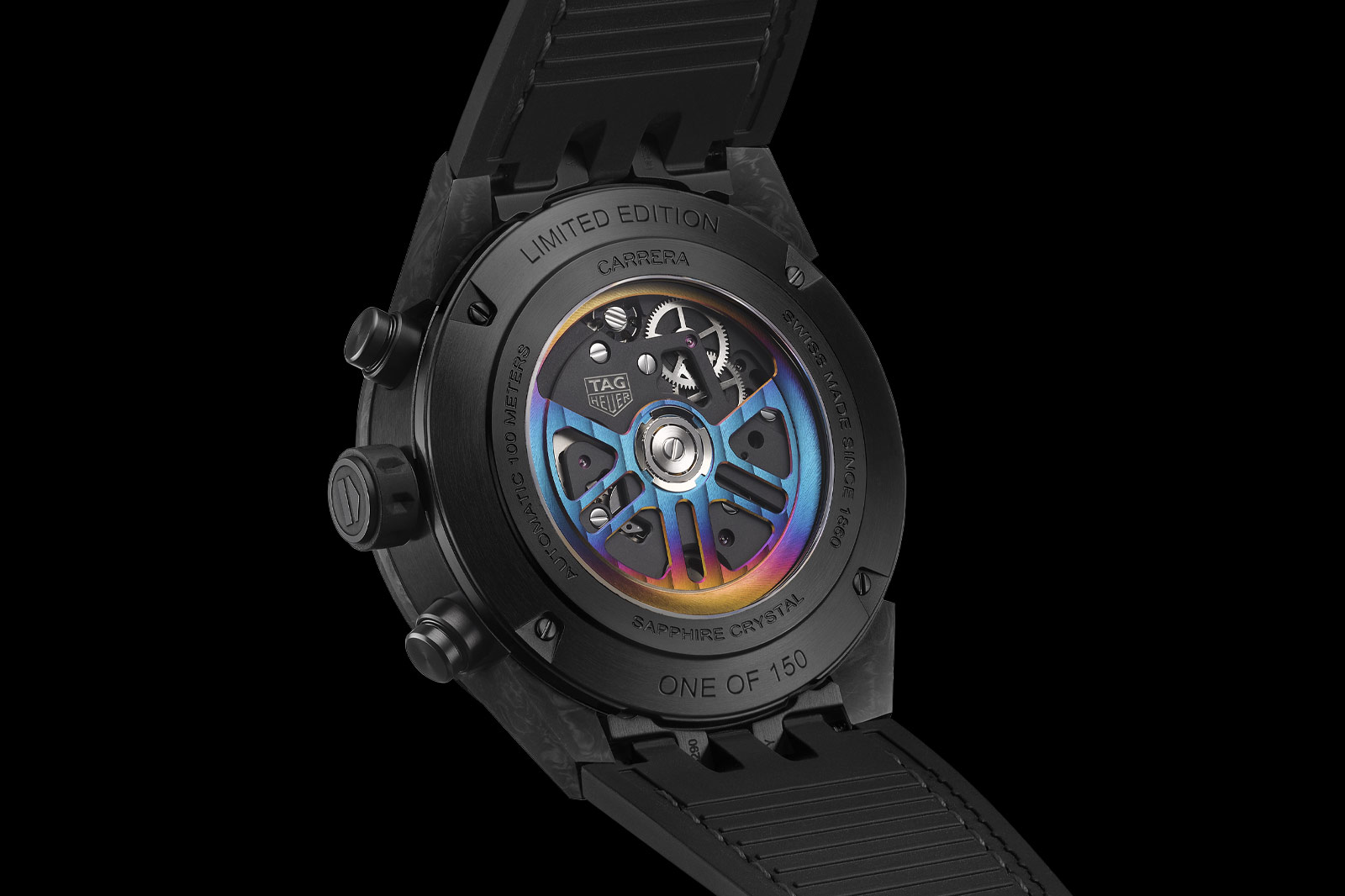 A cutting-edge technique has been used to create a rainbow of colours across the face of the Carrera Chronograph Tourbillon Polychrome. Stylistically, it looks awesome with its iridescent sheen, like oil across water. On a technical level, the finish has been achieved through a PVD treatment. Typically, PVD is applied in a uniform manner – such as can be seen on this watch’s case – but for the dial, tiny variations in thickness were allowed to occur. These differences (and we’re talking nanometres here) allow the colour spectrum to reveal itself. 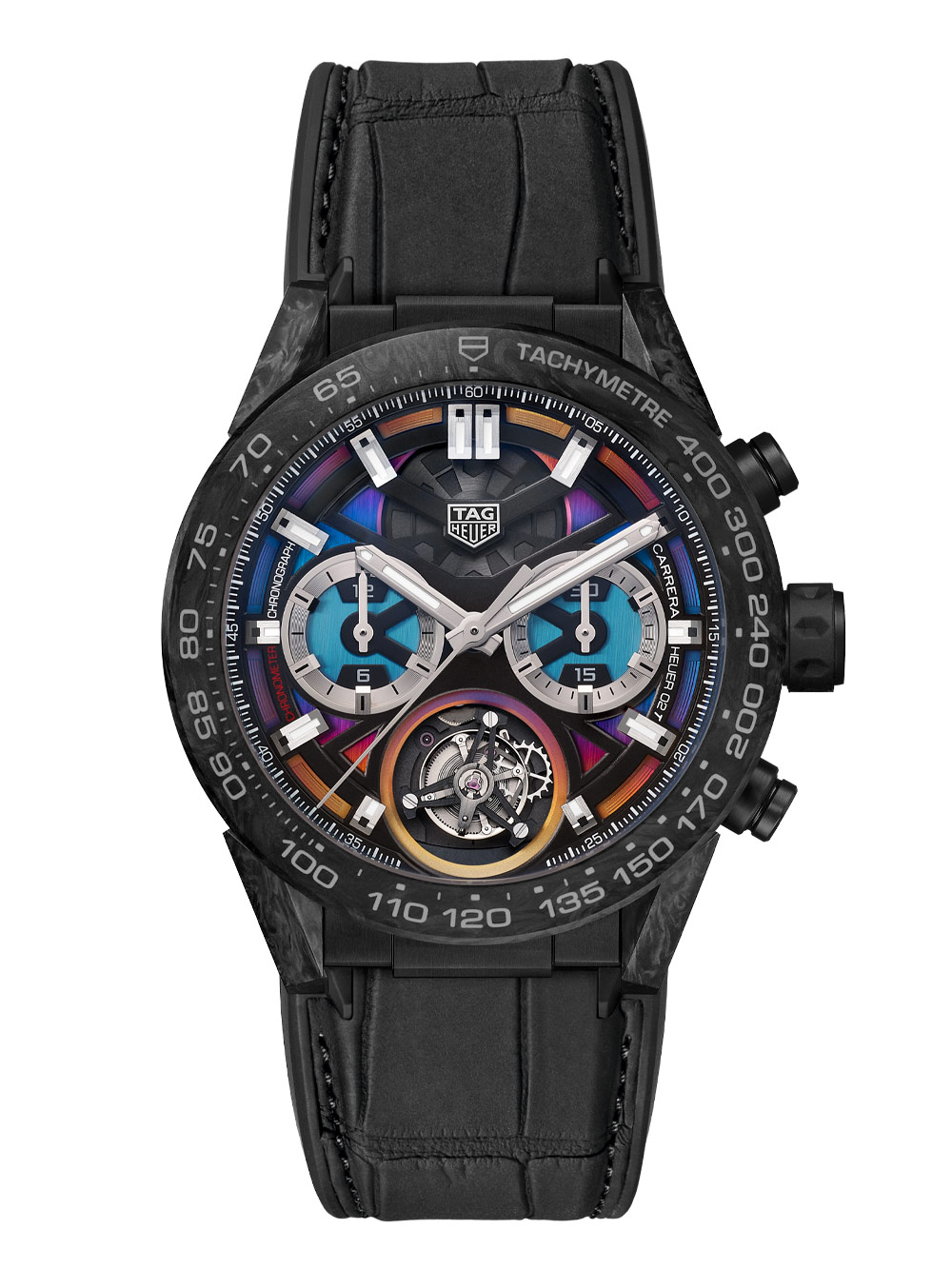 The same rainbow finish has been used for the skeletonised rotor that’s visible through the sapphire exhibition caseback. Through said caseback you can also see the workings of the Calibre 02T COSC, Tag Heuer’s premier high complication movement, which has automatic winding and an 80-hour power reserve.

It’s not the first time this year alone TAG Heuer has tried their hand at a cutting-edge finish – I.e. the Carrera Plasma – but I’d argue that this is far, far cooler. So much so in fact that all 150 pieces have already sold, despite a price of £19,950.