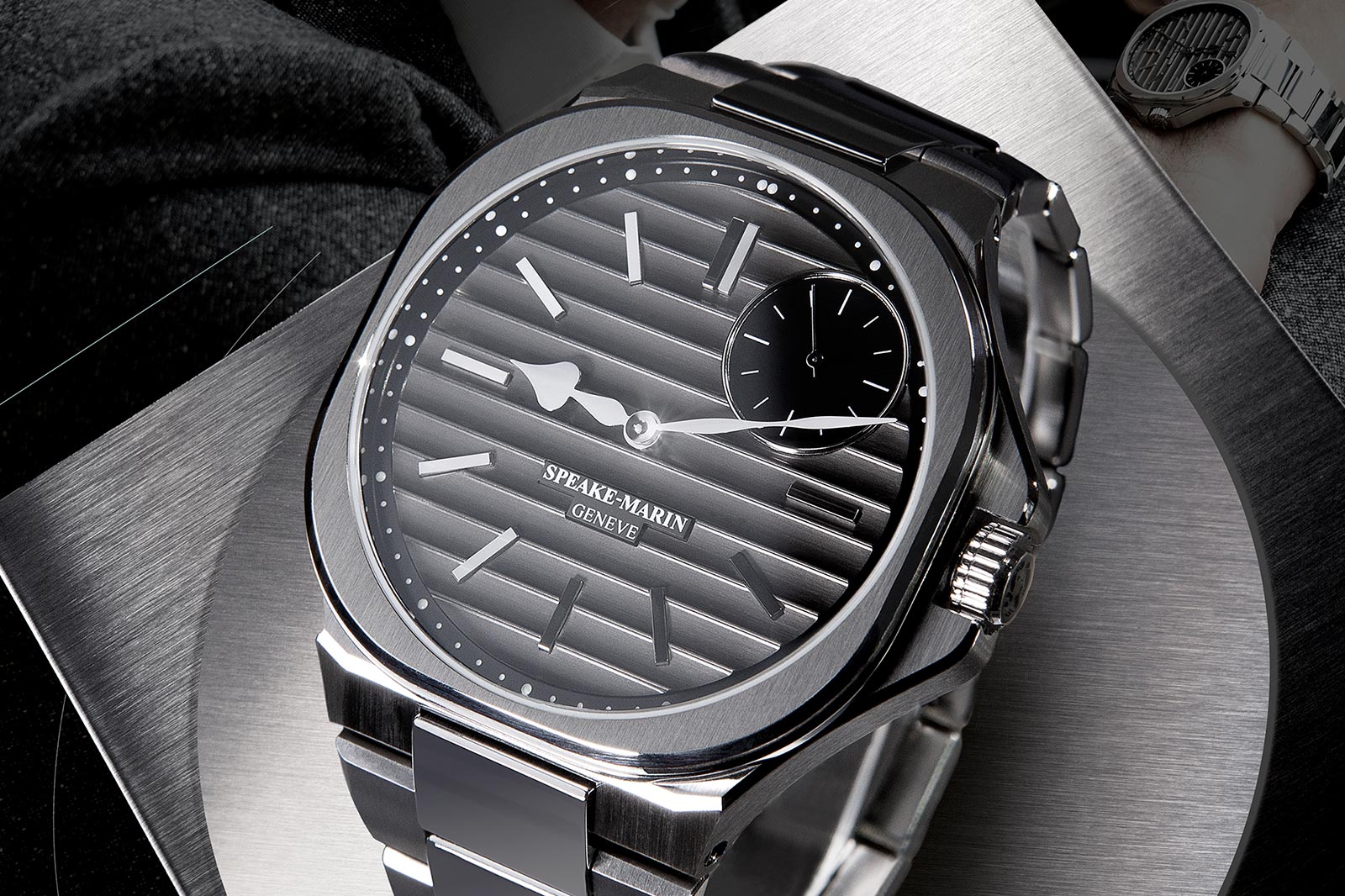 Just last week we released an article looking at the haute horological world of Speake-Marin. We talked about how their watches are a love letter to open dials and high end complications. So we were surprised as anyone to find out that their new watch is practically a 180° stylistic dive into the realms of sports luxe unlike anything they’ve done before. This is the Speake-Marin Ripples.

Off the bat, it has a brand new case, which has the potential to become the foundation of an entire collection. The most distinctive element of the case is its shape, which is a unique design that’s tricky to describe. Its body is octagonal with vertical sides but the main profile comes from the bezel, which has four flat edges and curved corners, making it a squircle or square in the round – the same shape used on the recent Breitling Triumph subdials – but the dial itself is a conventional circle. The closest comparison to an existing watch is the Bell & Ross BR 05 except that on the Ripples the bezel covers almost the entire area of the case below. 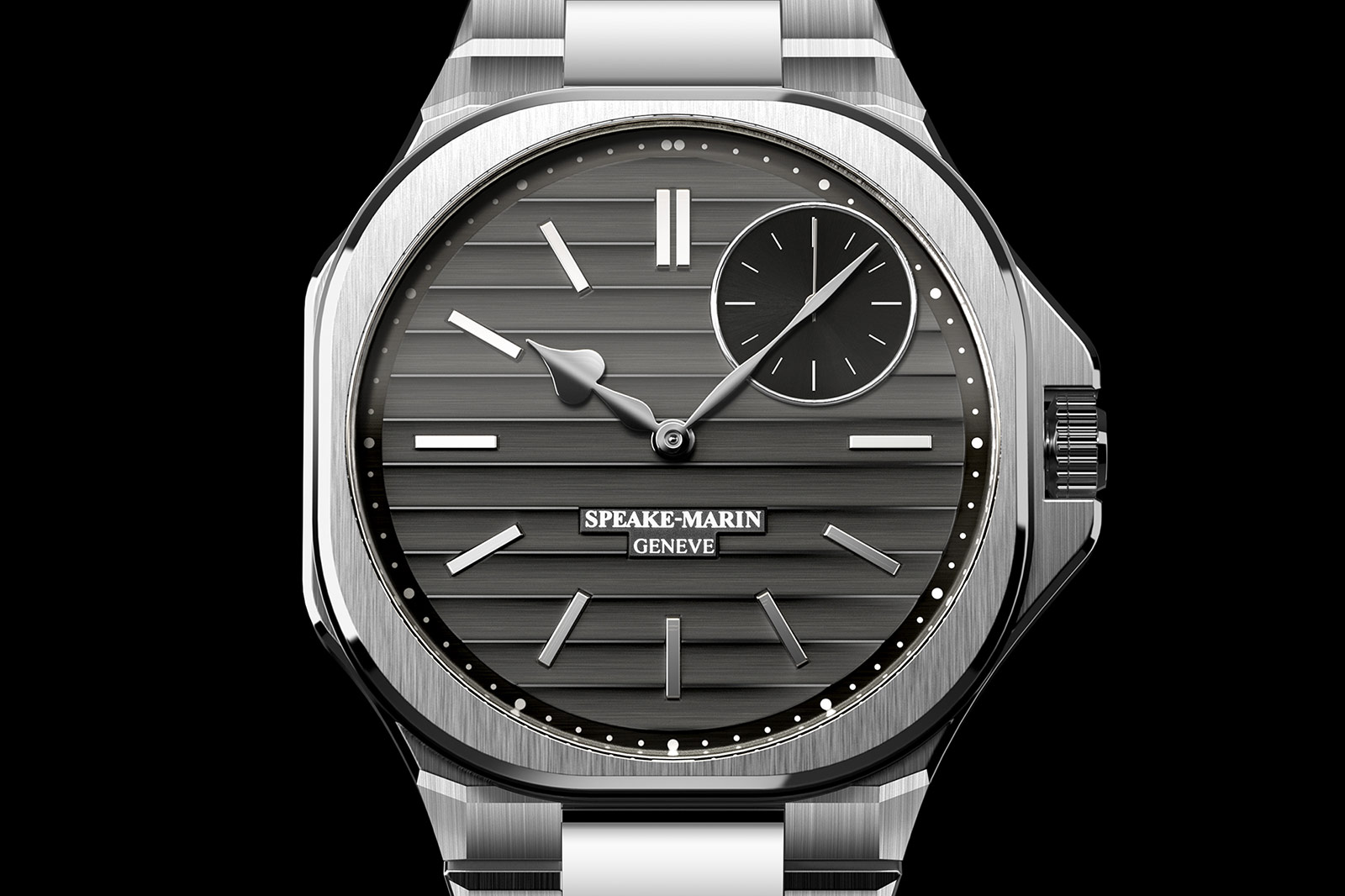 Speake-Marin is calling this new case design La City, with “La” being French for “The”, making its name The City, in reference to The City of London. Despite being resolutely Swiss, the roots of Speake-Marin can be traced back to a British watchmaker and it’s this history they are commemorating with the name. 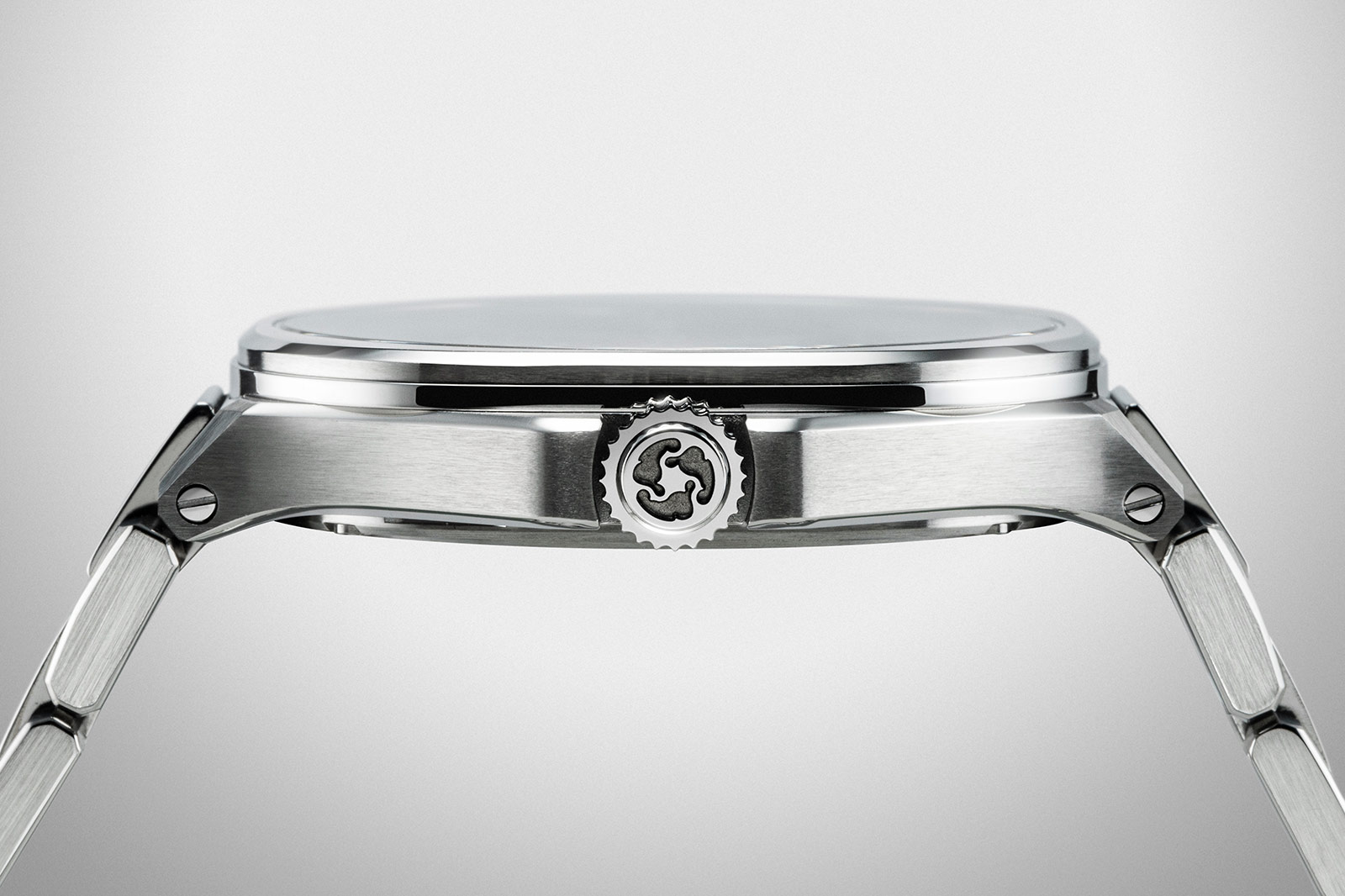 In fact, the homage to Britain goes deeper because the hour hand is the same shape as Big Ben’s, the most iconic clock face in the world. It’s safe to say that the Ripples is a fair bit smaller than its inspiration because its case is 40.3mm in diameter, not 7m. The last thing to note about the case is the prominent crown guards which are also new and the whole thing is stainless steel. 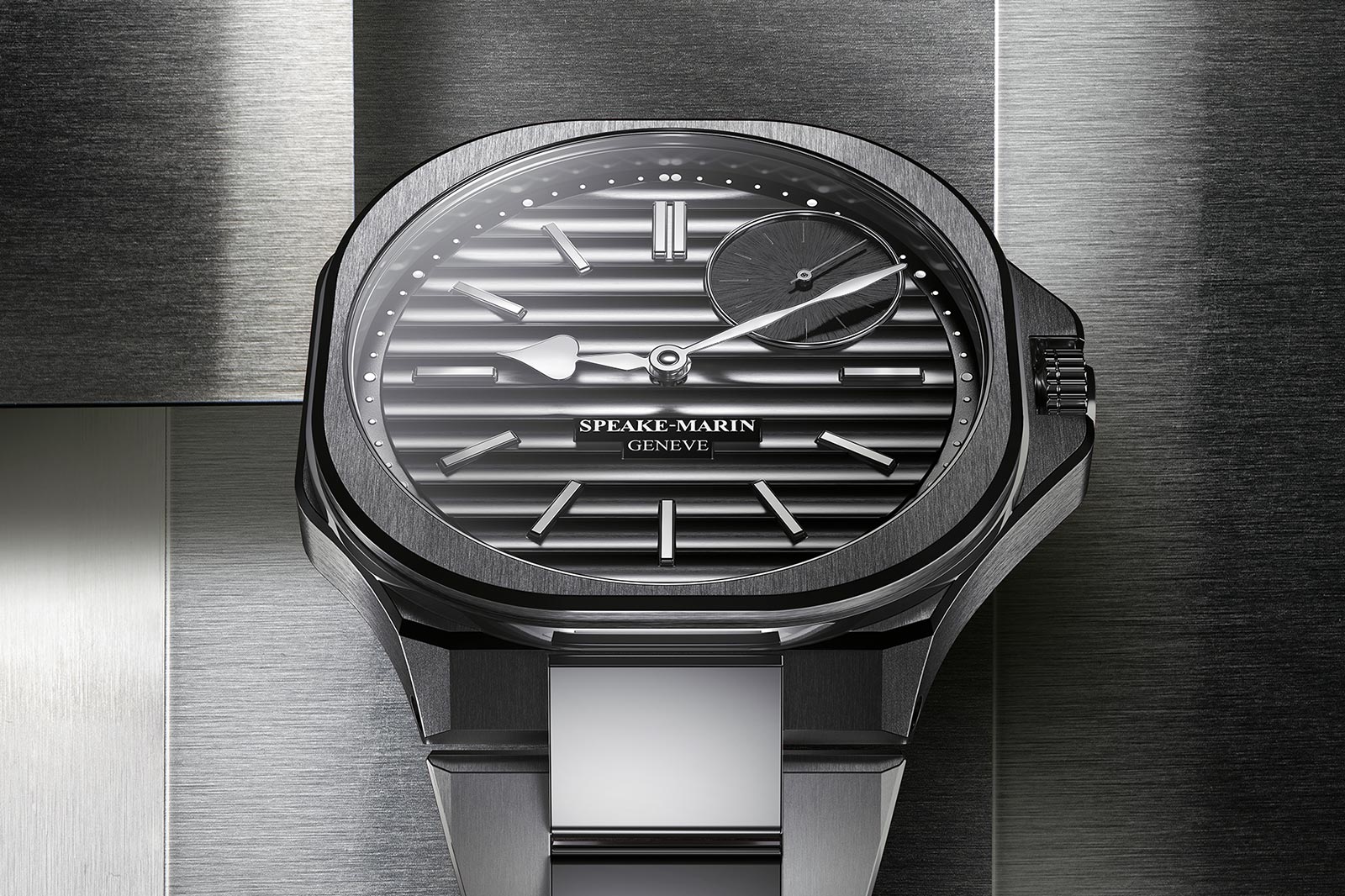 Moving onto the dial of Ripples, that’s entirely new as well. It’s a series of horizontal strips with metallic brushed finishes, each on a slight angle meaning that light catches each one slightly differently. Hence the name Ripples as the dial seems to undulate like the surface of water. On a sports chic watch it can’t fail to draw comparisons to the horizontal lines of the Nautilus, but the ripple effect makes it distinctive. 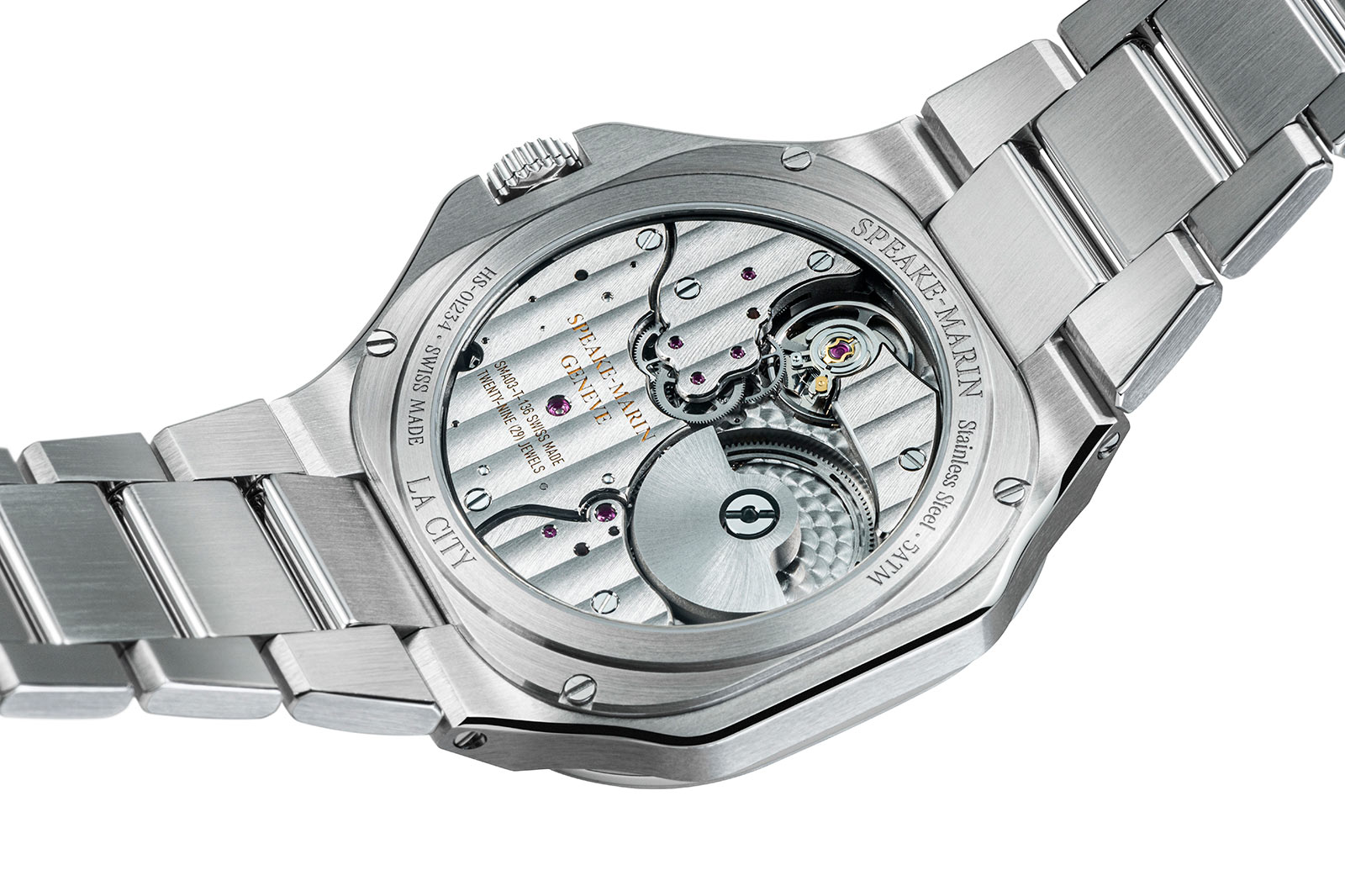 While the external attributes of the Ripples are entirely new for Speake-Marin, the calibre housed inside is made by the same workshop as their other models. Specifically Le Cercle Des Horlogers, a haute horology atelier owned by the same person who owns Speake-Marin. The movement used in Ripples is the SMA03-T, an update to the SMA03 with new finishing including circular graining. It has a 52-hour power reserve and time only functionality with the small seconds set between 1 and 2, the signature position for the brand. 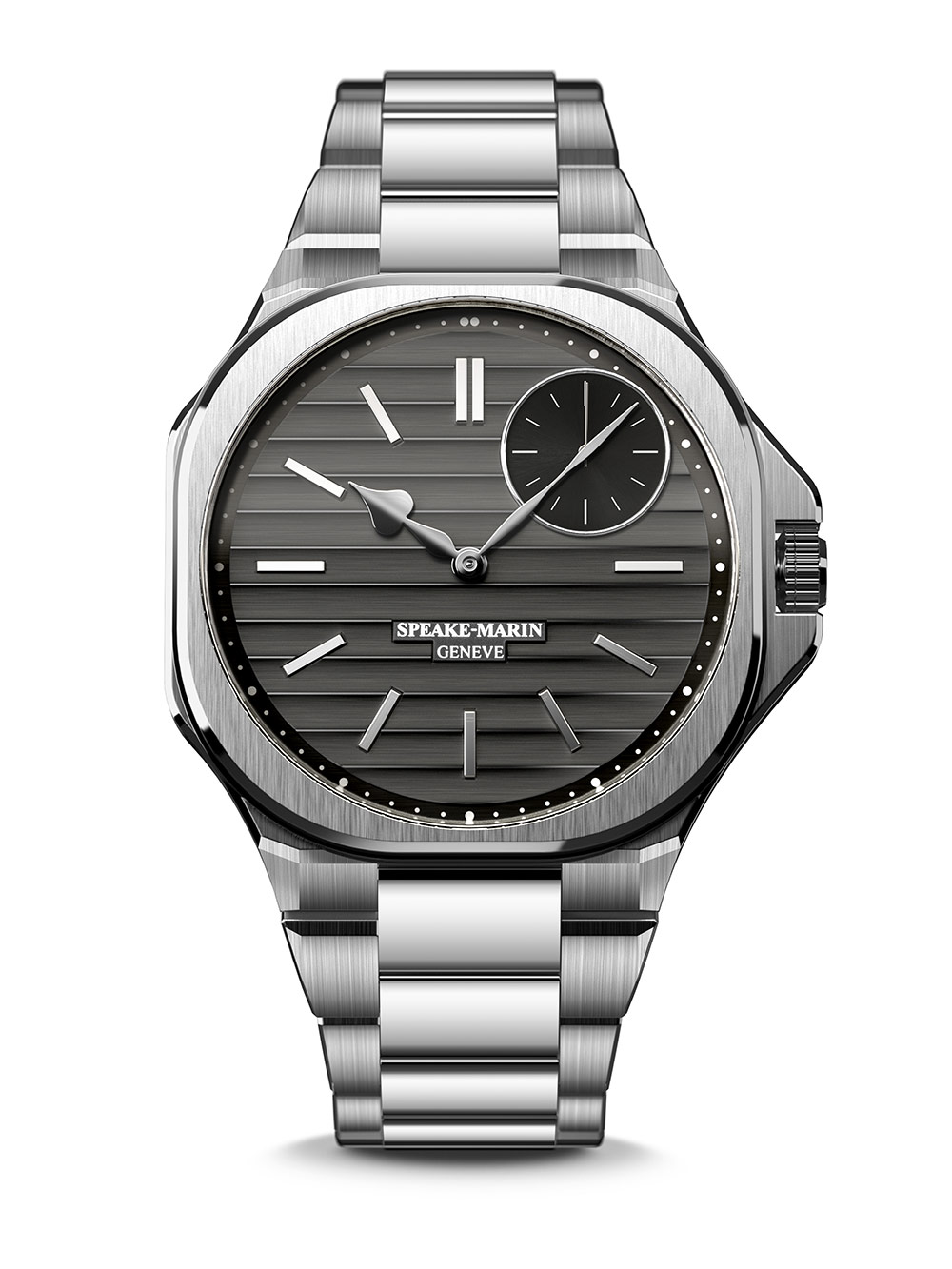 Ripples will have a limited annual production of 100 pieces and is priced at CHF 19,900 (without VAT and importation taxes). While 100 pieces per year might sound like very low numbers, Speake-Marin are known for producing only handfuls of their watches, making the Ripples one of the most widely available that they produce. It might be their first attempt at sports chic but hopefully it’s not their last.