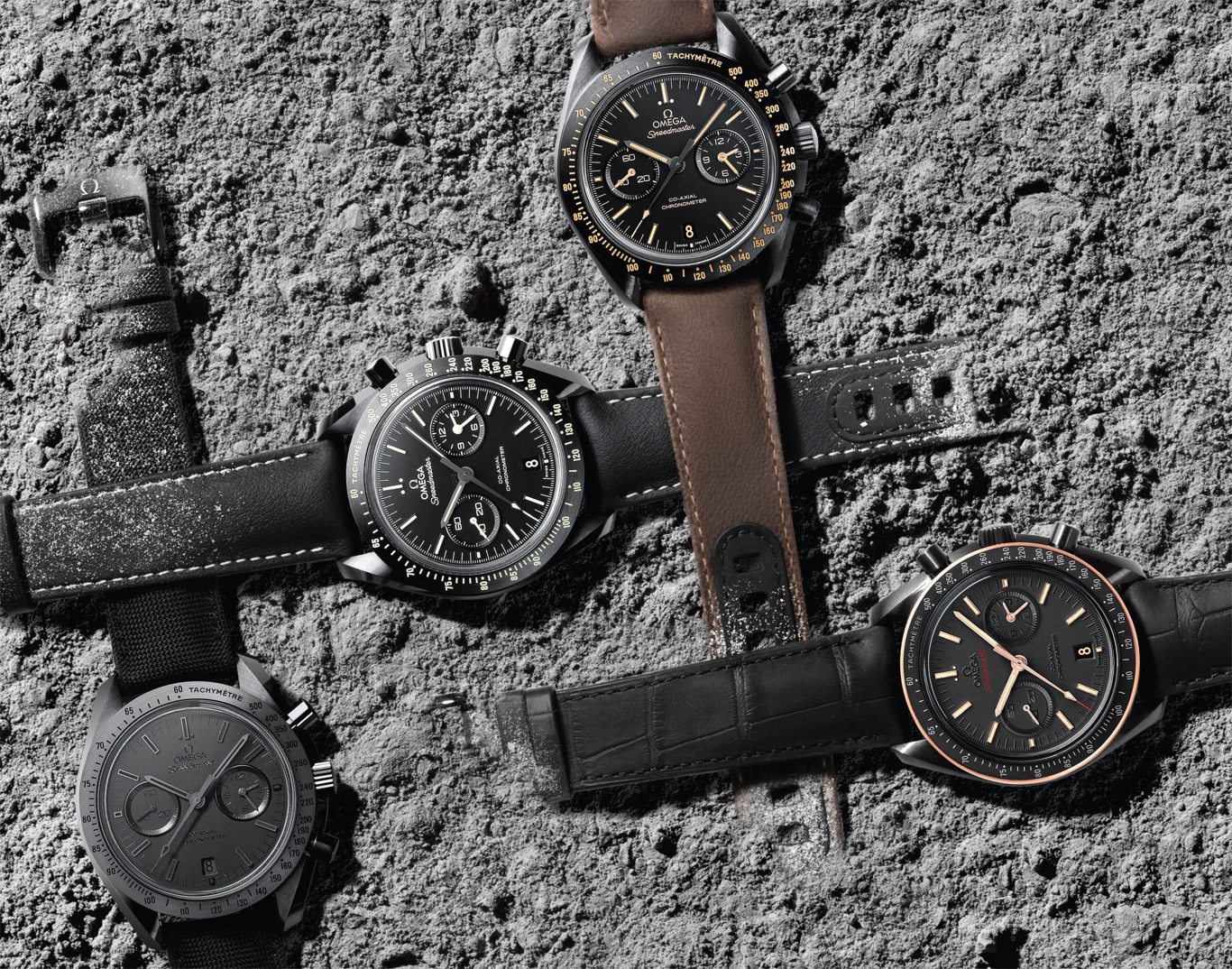 Nearly half a century since we watched grainy footage of Neil Armstrong bouncing on to the dusty surface of the moon, our fascination with space travel has continued. Recently a whole new generation has been inspired: thousands watched in 2014 as plucky little Philae landed on a comet, and the fly-by of Pluto carried out by the New Horizons space probe in 2015 showed the solar system’s final frontier in a whole new light. How else do you explain the rush amongst the super-rich to snap up Virgin Galactic tickets? And you can be sure of one thing: for those in the know, strapped to their wrists will most definitely be an Omega Speedmaster. 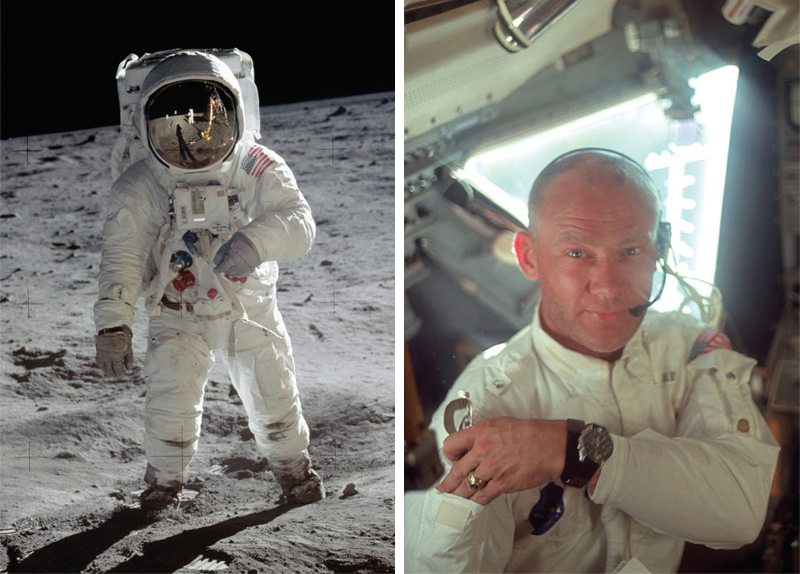 Buzz Aldrin with his Omega Speedmaster

Omega’s official links with NASA stretch back to 1965, when the agency began the hunt for a space-suitable watch for their astronauts. Rigorous testing was carried out on examples from several companies, including Rolex and Longines. Only the Speedmaster chronograph endured being frozen, heated and refrozen; G shocks comparable to atmosphere re-entry; high and low pressure; humidity; a highly corrosive 100% oxygen environment and even noisetesting to 130 decibels. Following this, the Speedmaster (also nicknamed the Moonwatch) was dubbed ‘Flight Qualified for all Manned Space Missions.’ Since then, of course, the movement – a calibre 1861 – has been tweaked to increase precision, and the Speedmaster has been fully retested, and passed, each time. 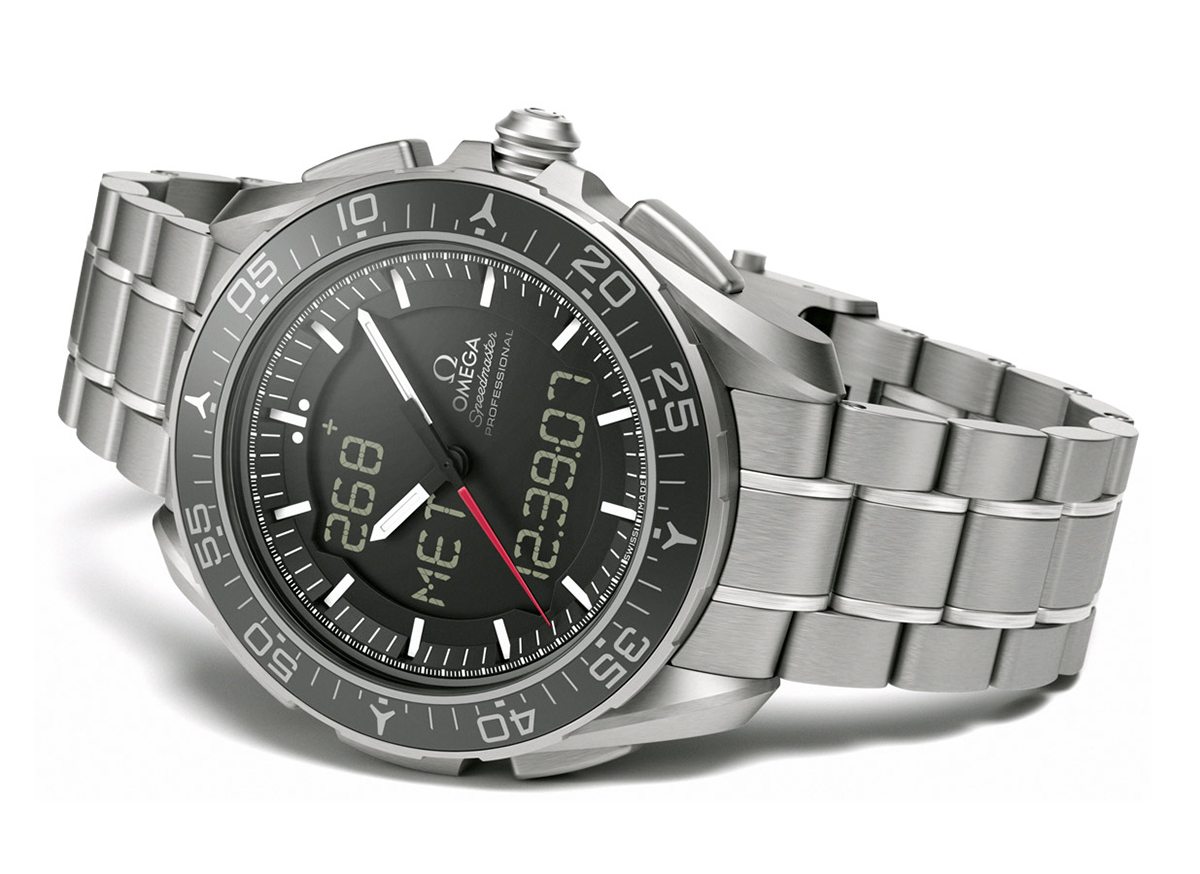 The Speedmaster X-33 arrived in 1998 following the astronauts’ flirtation with quartz watches and a request for more functions. The dial shows digital elements including three different timezones, but the two functions most useful for astronauts are the mission elapsed time (MET) and phase elapsed time (PET). Astronauts are divided these days over the classic Moonwatch and the X-33. Canadian Commander Chris Hadfield, whose Twitter observations about life on the International Space Station were a viral hit, favours the latter. A video of his X-33 on a loose bracelet, floating gently around his wrist, showcases extreme conditions that most watchmakers don’t even have to consider. 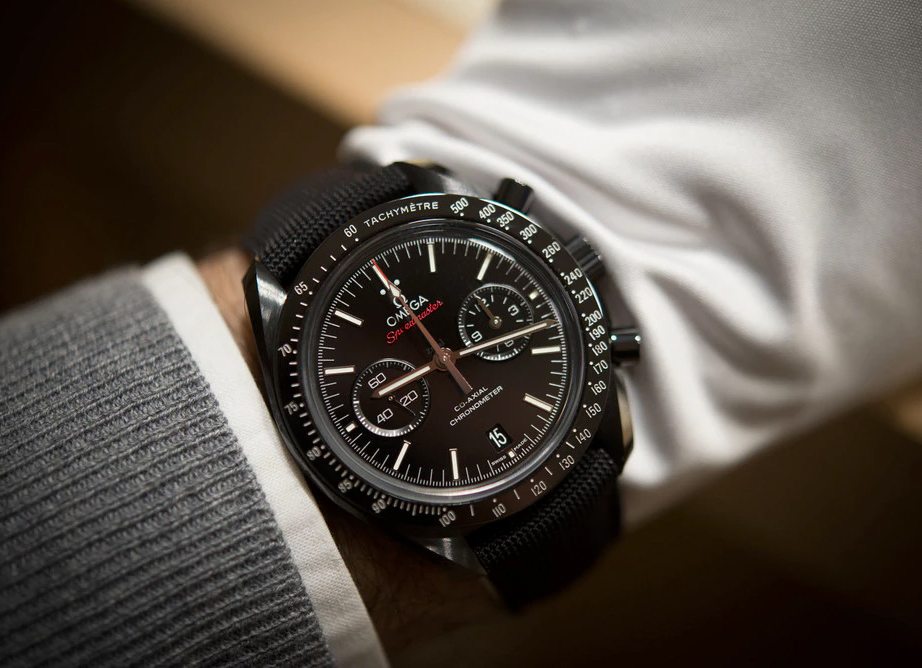 Omega Speedmaster Moonwatch Dark Side of the Moon

In 2013, Omega launched the Speedmaster Dark Side of the Moon, inspired by the Apollo 8 astronauts who were the first people to see what lay on the other side. It was a stylish redesign that tapped into the black-on-black trend, with cases hewn from a single block of black zirconium oxide ceramic. At this year’s Baselworld four new variations were launched with a slightly baffling array of names: the Vintage Black with yellowed numerals and markings; the Sedna Black, with Omega’s own rose gold alloy used for the bezel and indexes; the Pitch Black, with white-green LumiNova hands, indexes and tachymeter bezel; and the Black Black, where the only variation on the dial is a panoply of textures – absolutely everything is, well, black. It was a gamble to tinker with a classic, but one that certainly paid off.

The newest Speedmaster is perhaps the most poignant. The Moonwatch Silver Snoopy Award 45th Anniversary Chronograph Limited Edition commemorates one of NASA’s finest hours, and the part played by Omega in the safe homecoming of the astronauts on board Apollo 13. The story is a famous one – en route to the Fra Mauro crater on the moon the crew became stuck in an exceptional predicament after an exploding oxygen tank damaged a fuel cell, requiring a near-total shutdown of electronic systems. The mission was aborted, and Commander James Lovell had to adjust their course by manually controlling the Lunar Module’s thrusters and engine, relying on a Speedmaster for timing. The course correction was successful and they splashed down safely into the Pacific Ocean. 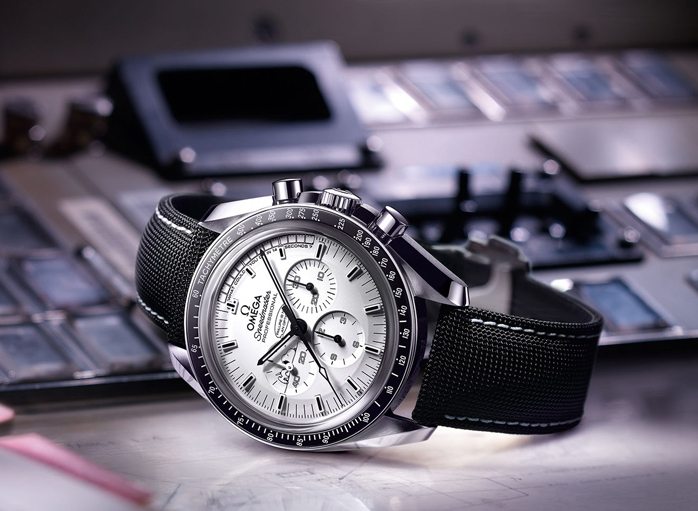 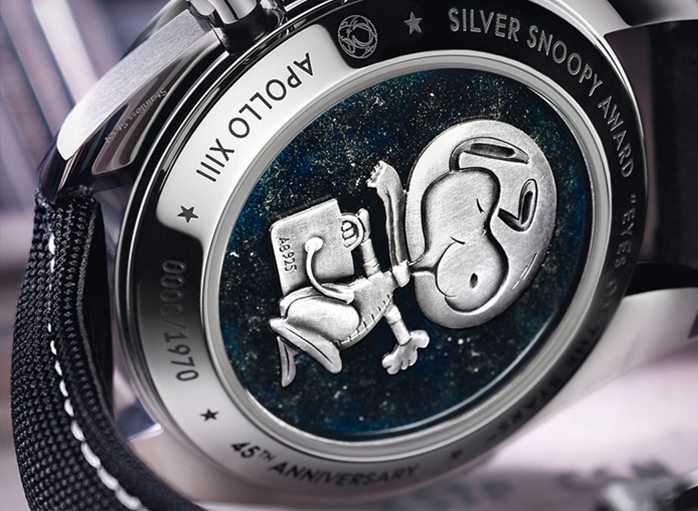 Omega was later given the Silver Snoopy Award for outstanding achievements in flight safety. Snoopy, NASA’s safety mascot, makes an appearance on the 45th anniversary’s black and white, comic strip inspired dial, lying asleep across the 9 o’clock sub-dial. He’s also engraved on the caseback, wearing a spacesuit and surrounded by a silver and blue enamel sky. The first 14 seconds on the dial are boxed off and meaningfully marked “What could you do in 14 seconds?”, a reference to the timing of one of Lovell’s course corrections. Moonwatch buffs will also be ecstatic to hear that inside features a period-correct hand-wound calibre 1861.

Astonishingly, apart from the Speedmaster no other piece of equipment has been used consistently during the Mercury, Gemini, Apollo, Skylab, Soyuz, Salyut, Space Shuttle, Mir and ISS programs. The Space Race may have ended, but with plans to send astronauts to Mars in the next 20 years it’s likely that a Speedmaster will be going along for the ride, too. 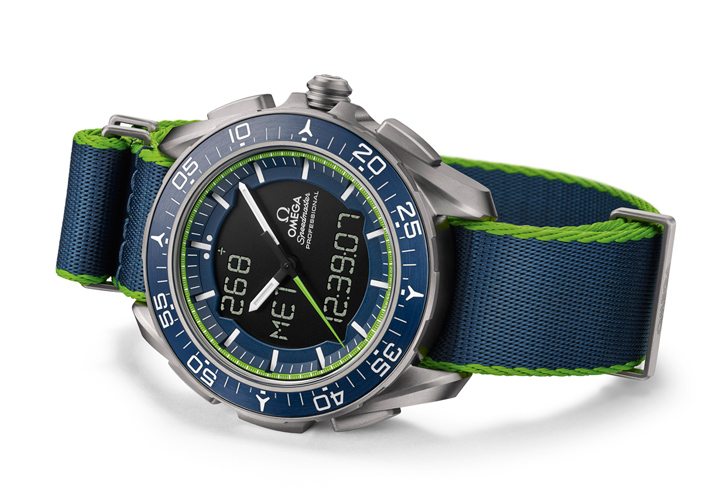 OMEGA’S partnership with the Solar Impulse project is a little closer to earth. This limited edition Speedmaster Skywalker X-33 was created to celebrate the aircraft’s round-the-world attempt using only solar power. America has astronauts, while Russia has cosmonauts. They favour German brand Fortis, whose latest addition to the Cosmonautis line is the Monolith 3 daydate chronograph. 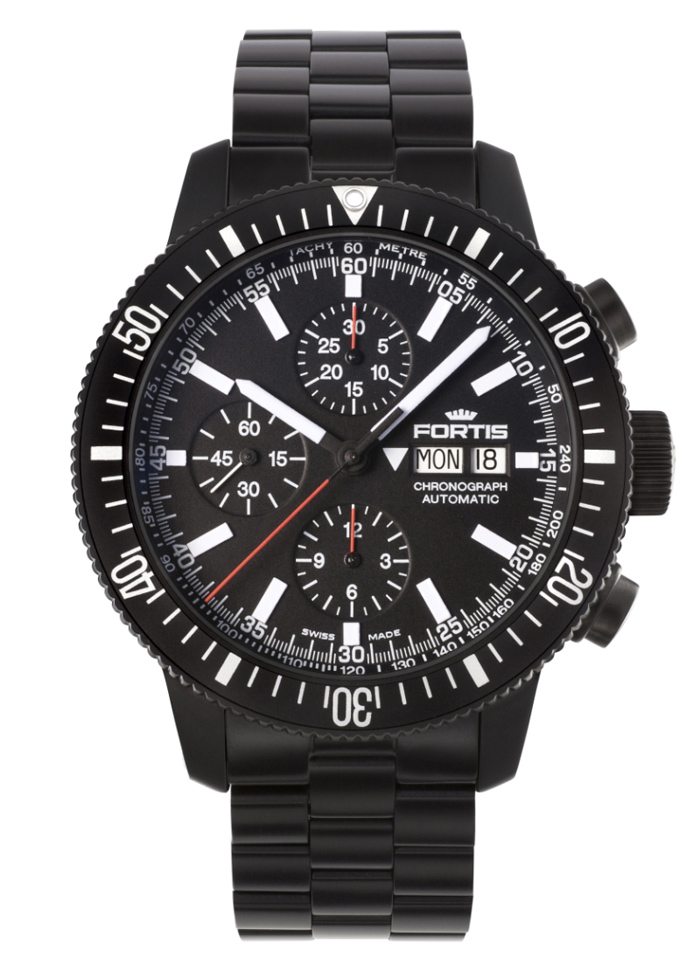 Bulova supplied the timing mechanisms for spacecraft systems on the Apollo missions, using the Accutron 214 movement – the pleasingly retro Lobster is the latest in the Accutron line. 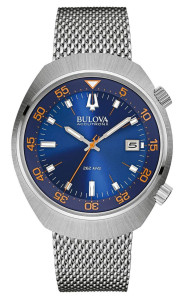 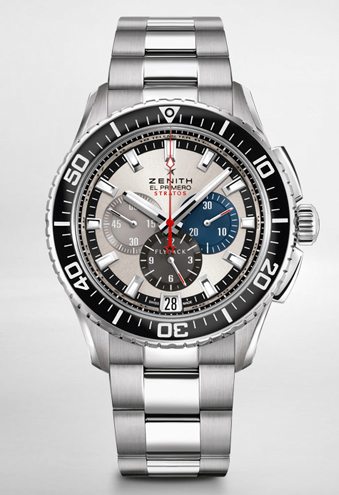 Zenith’s automatic chronograph, the El Primero Stratos Flyback Tribute to Felix Baumgartner, accompanied the daredevil skydiver as he jumped from the outer reaches of the atmosphere. 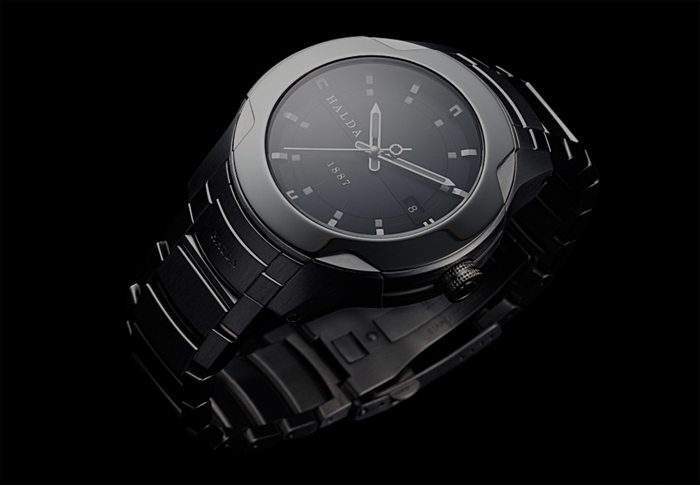 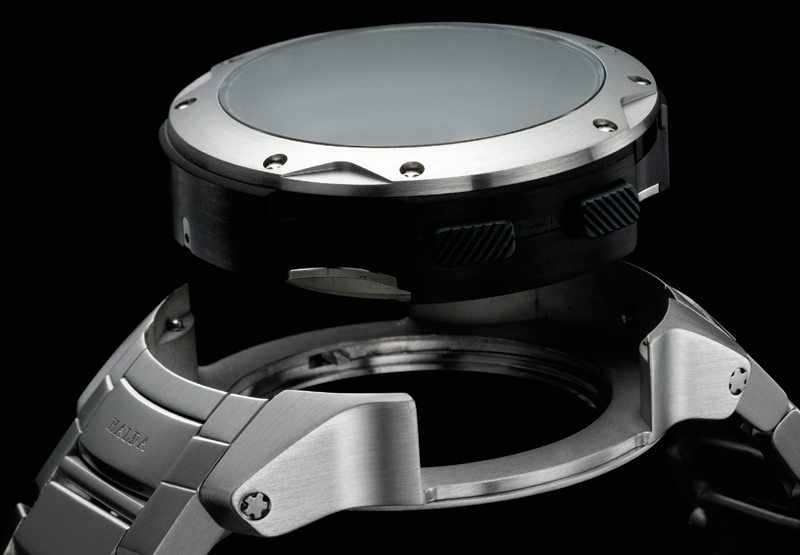 Let’s not forget Swedish company Halda who came up with the Space Discovery with two nifty interchangeable modules: a mechanical one for earth and an electronic one for space.