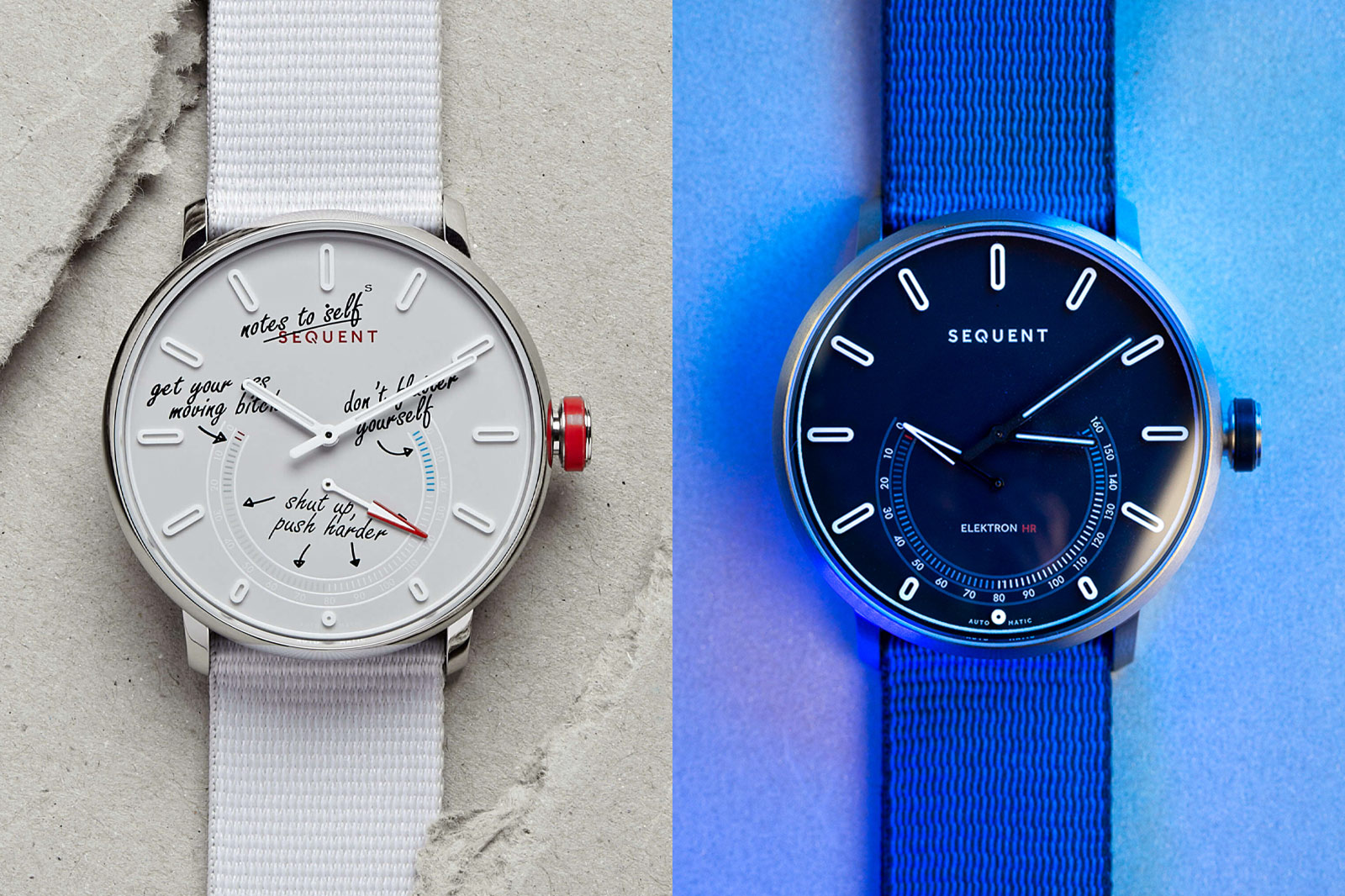 The idea behind Sequent smartwatches is one of those quintessential, ‘simple in concept, hard in execution’ kind of deals. On the surface, it’s the coming together of a smart, connected watch and traditional timepiece. There are a few brands that have tried to do similar things in the past to greater or lesser success (usually lesser) but they often tended to be surface level. And we do mean surface – wearables that just happened to have a dial and hands. 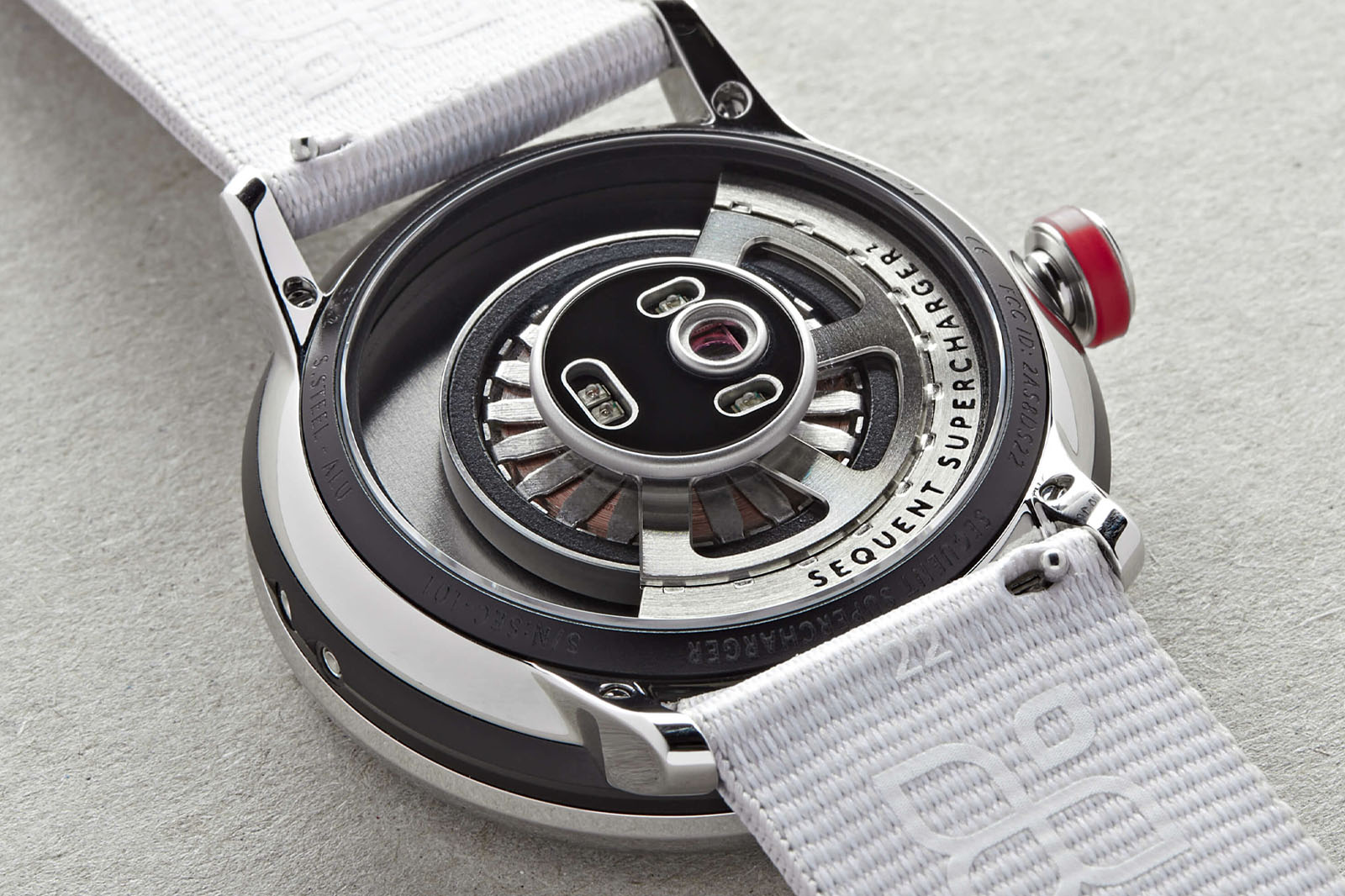 That’s not the case with Sequent smartwatches. The seminal Elektron and SuperCharger sound like very Swiss science experiments, but in fact they’re as much automatic watches as pieces of tech. Instead of a battery, both use a fully fledged automatic winding system, complete with a tungsten rotor, to generate enough electricity to power the watch. They’re one of the few smartwatches out there that you won’t need to worry about charging and the only true automatic timepiece that can monitor your health. 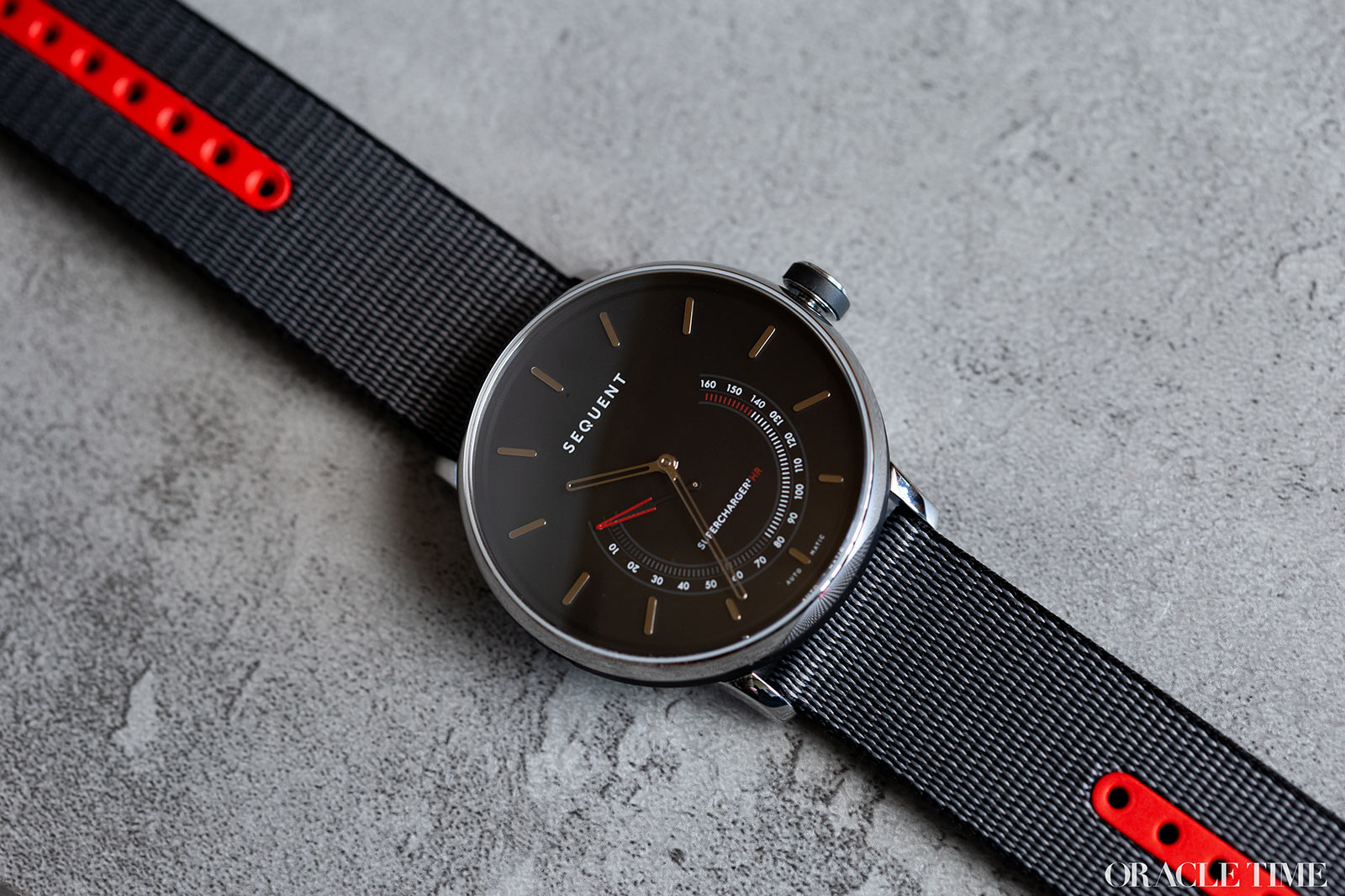 That’s not to say you need to wear one every day; the calibre has a 12-month standby time. That’s a full year of what, given it’s mechanically wound, we’re going to call a power reserve. they’re also hand-assembled in Switzerland. In short, the Elektron/SuperCharger are as close to true timepieces as smartwatches can get. Or as connected as an automatic can get, if you want to look at it the other way. 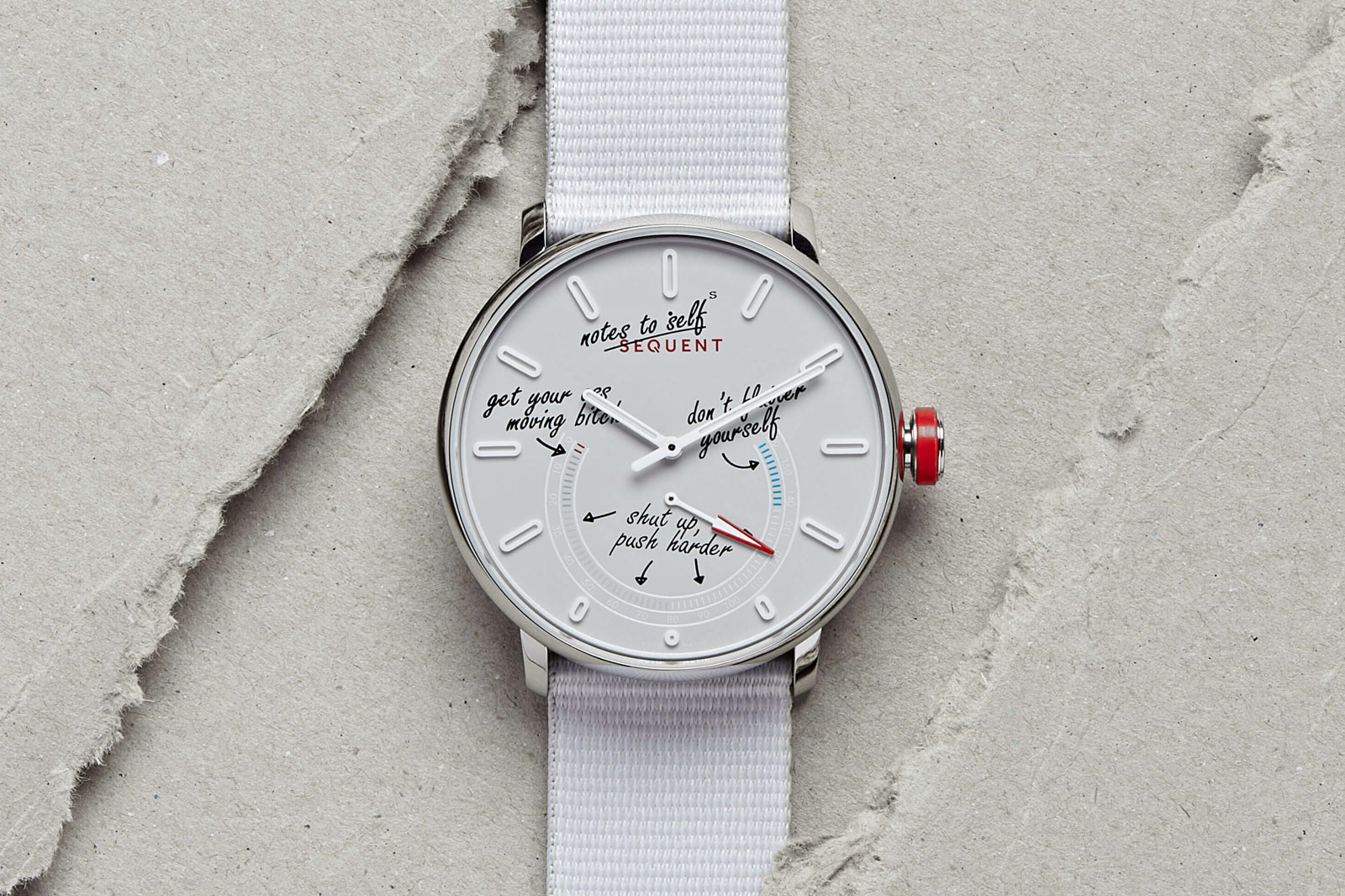 What it hasn’t really been of late is fun. It’s not Sequent’s fault that fun is something innovation is sorely lacking outside of the occasional funky screensaver. But for a brand disrupting two industries at once, that doesn’t sit right. They deserve to be a little bit more out-there. Enter, the Sequent Smart-Ass watch. 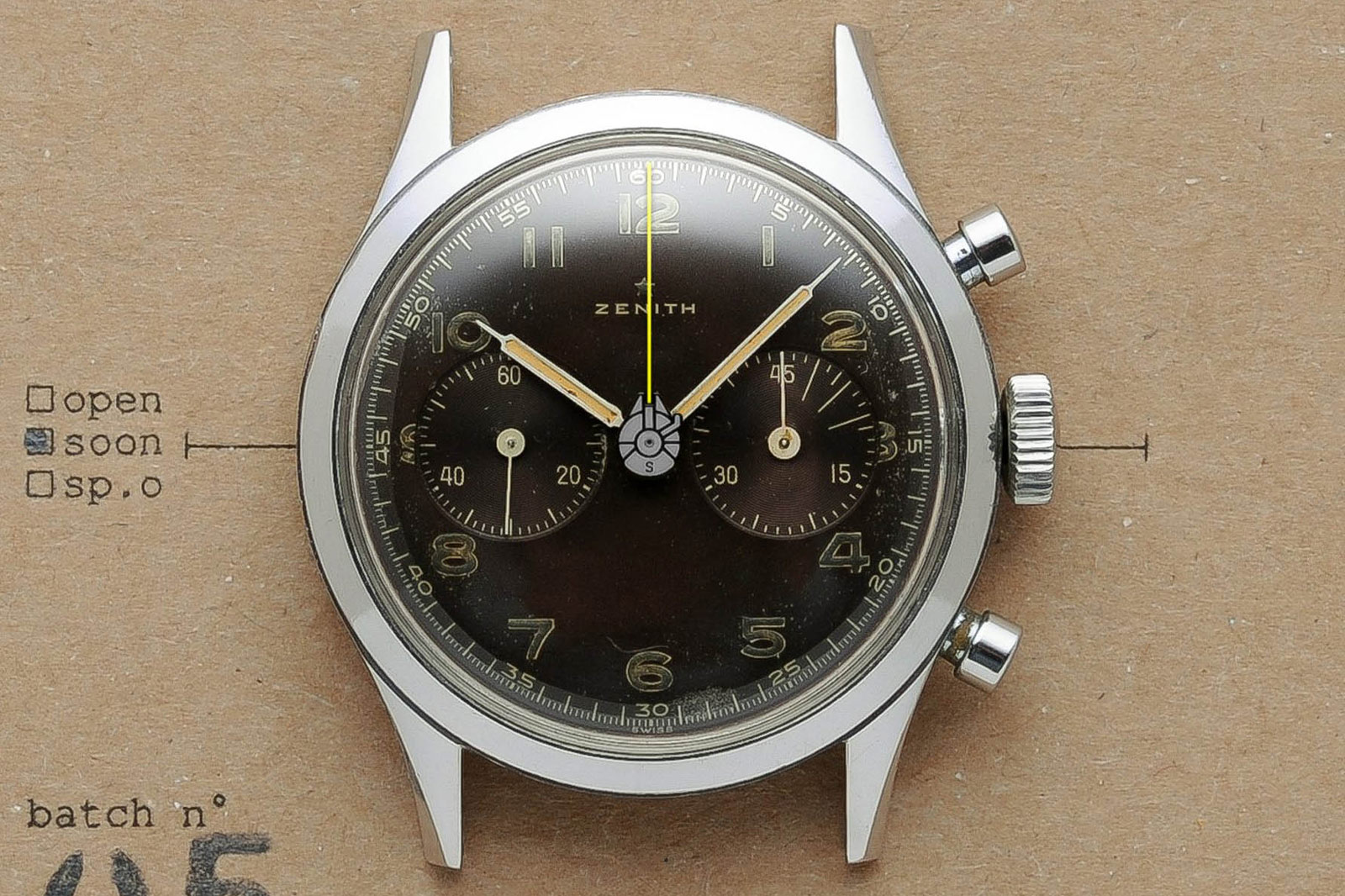 The technology behind the new piece is all Sequent (based on the Elektron), but the execution is from none other than Seconde Seconde. The Paris-based designer, real name Romaric André, is a force unto himself, creating custom watches with tongue firmly shoved in cheek. In his own words, “I vandalise other people’s products only because I failed at building mine.” We’re talking Minecraft-handed Rolexes and Zenith/Star Wars mashups. It’s like a street artist got really, really into watches. So, what did he do for Sequent? A smart watch that lets your inner monologue get real bitchy. 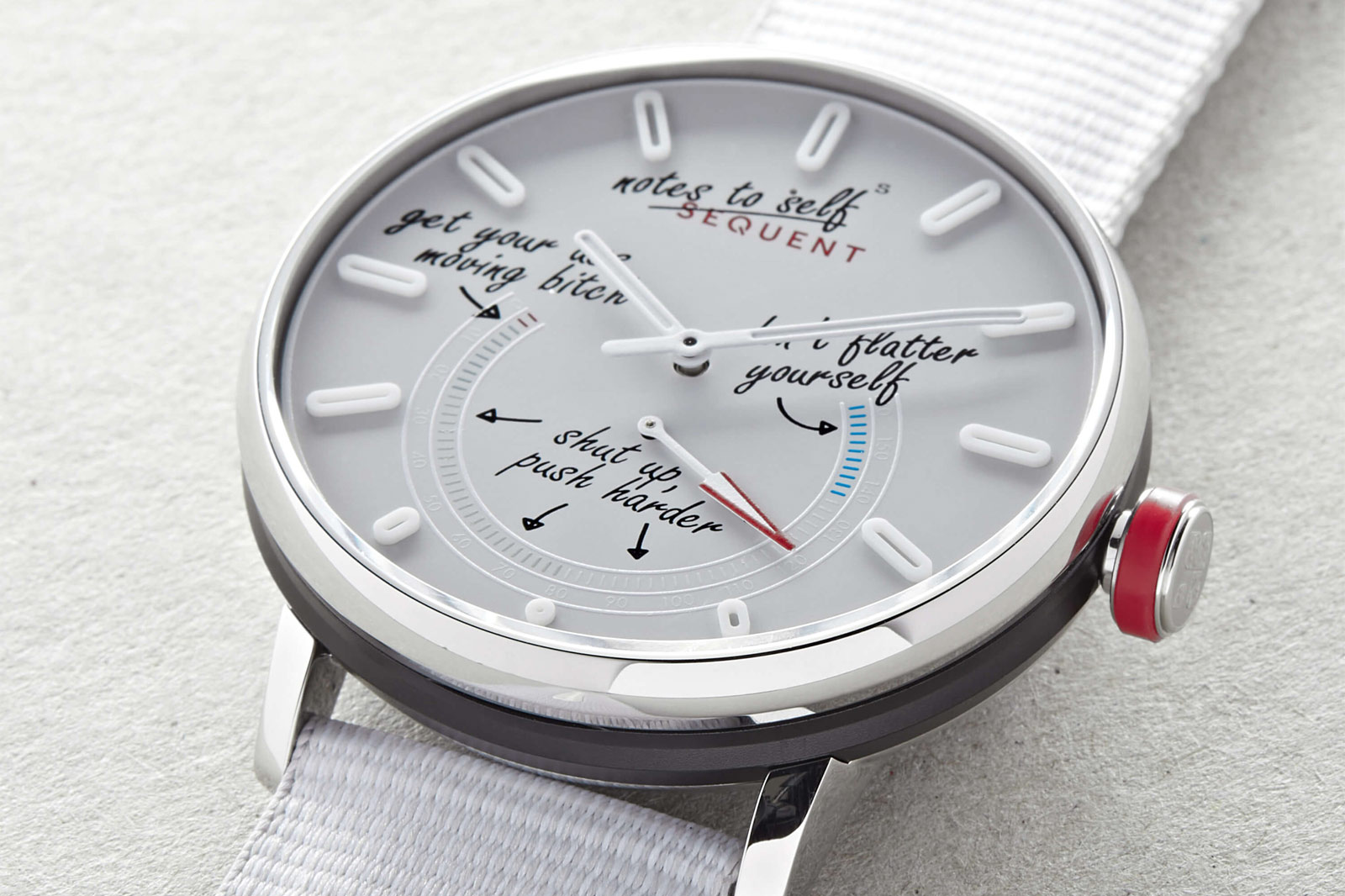 The centrepiece of the watch is a daily exercise tracker, a visible indication of how far from – or close to – your daily goal you are. In this case however, it comes with a few ‘motivational’ phrases. Starting at 0, it’s ‘get your ass moving bitch’. For most of the middle it’s ‘shup up, push harder’ and finally, just when you think you should get some kudos, you have ‘don’t flatter yourself’. As notes to self go, they’re a little harsh. 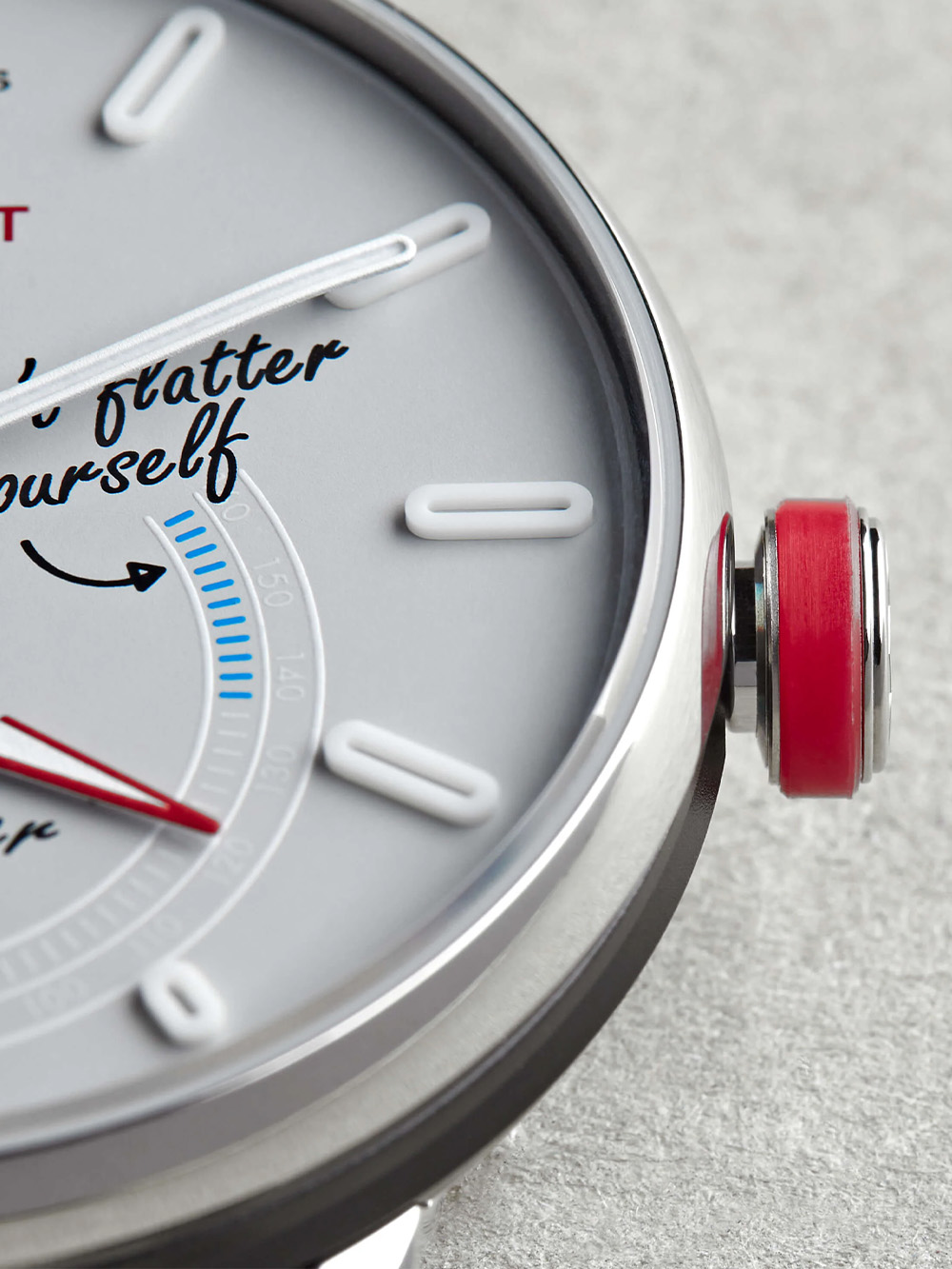 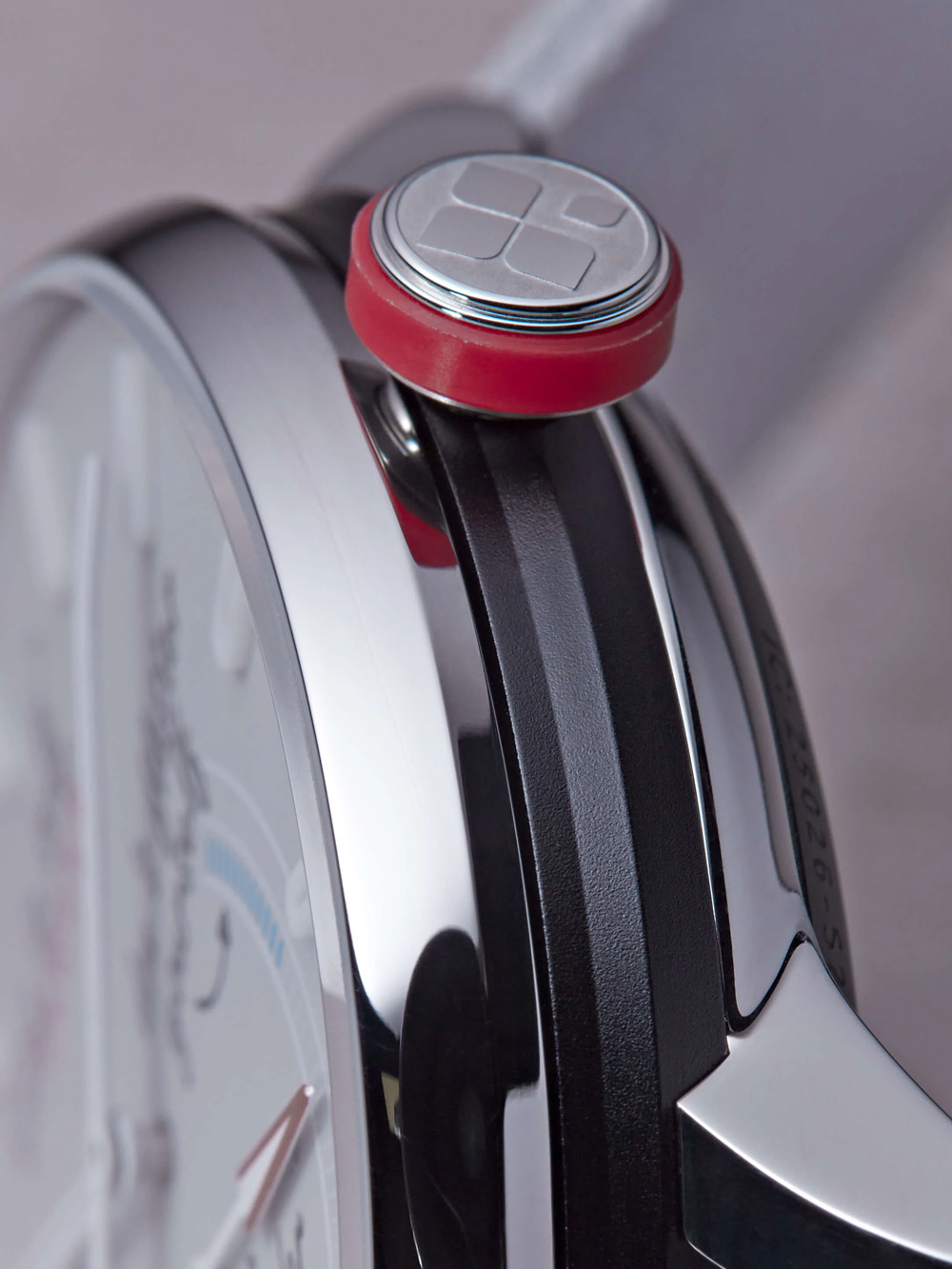 The wording is written on an otherwise stark white dial, crisp and modern, with the Sequent name, exercise indicating hand and crown all in red. Even without the smart-ass wording it would be a cool watch. As it is, it’s definitely not dull. Could you imagine the latest Apple Watch telling you to get bent? We can dream… 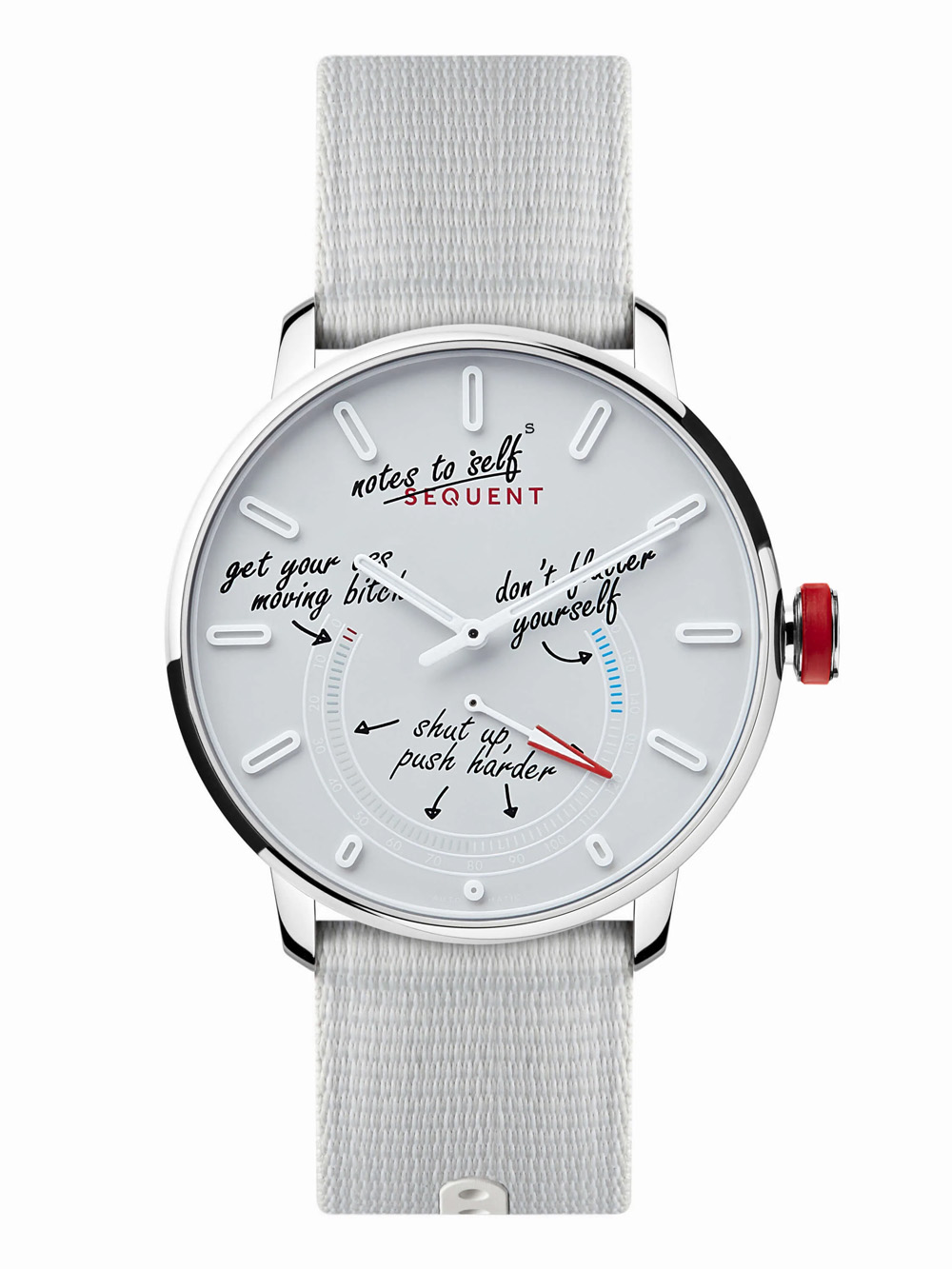 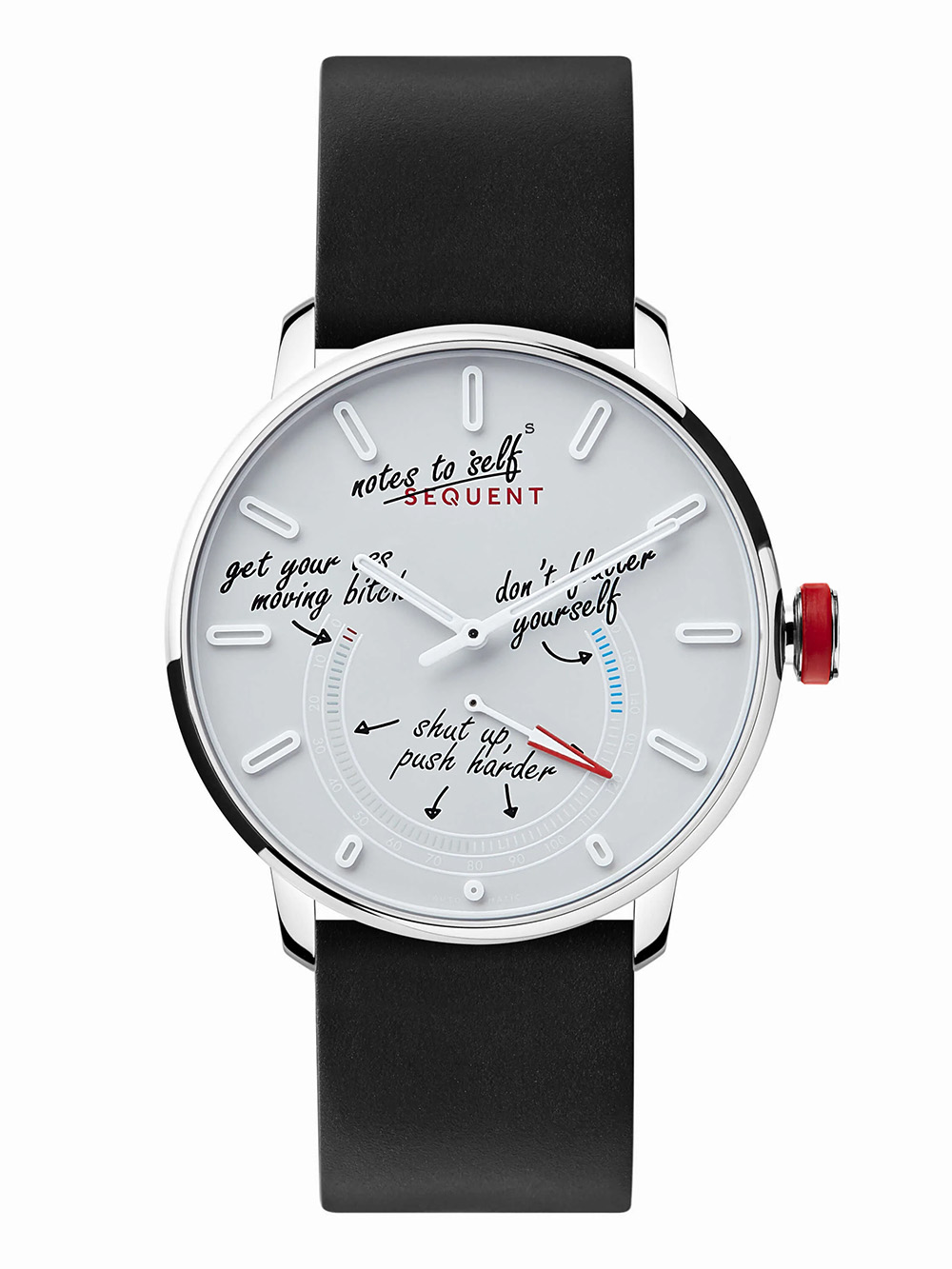 There will be 160 Smart-Ass Watches built, all with the latest generation SC 2.2 movement technology that Sequent has been slaving over. Given how prolific Seconde Seconde is though, we’re sure we can expect a seconde (sorry) collab sometime soon. Now to get back to avoiding exercise so our own inner monologue gives up and goes away…