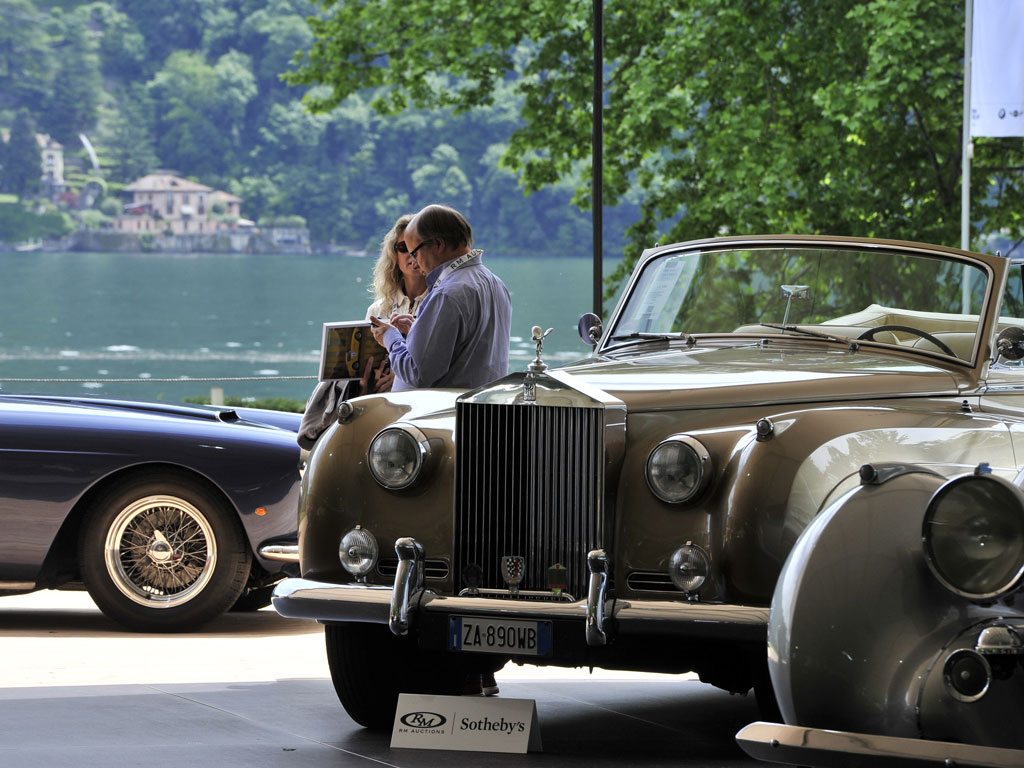 Classic cars and lakeside glasses of champagne in the Italian sunshine… it’s not exactly hard to see why thousands flock to Lake Como’s Concorzo d’Elegenza Villa d’Este each year. However, while each edition of the beautifully Italian concours is privy to a breathtaking selection of vintage automobiles, every other year has a little extra – RM Sotheby’s Villa Erba auction.

It’s unlikely that many of the lots will match the entries into the Concorzo – the number is very limited for good reason – but there are still some spectacular lots up for grabs, whether they have four wheels, two or in rare cases none. Here are the lots we’’ll be paying very close attention to. 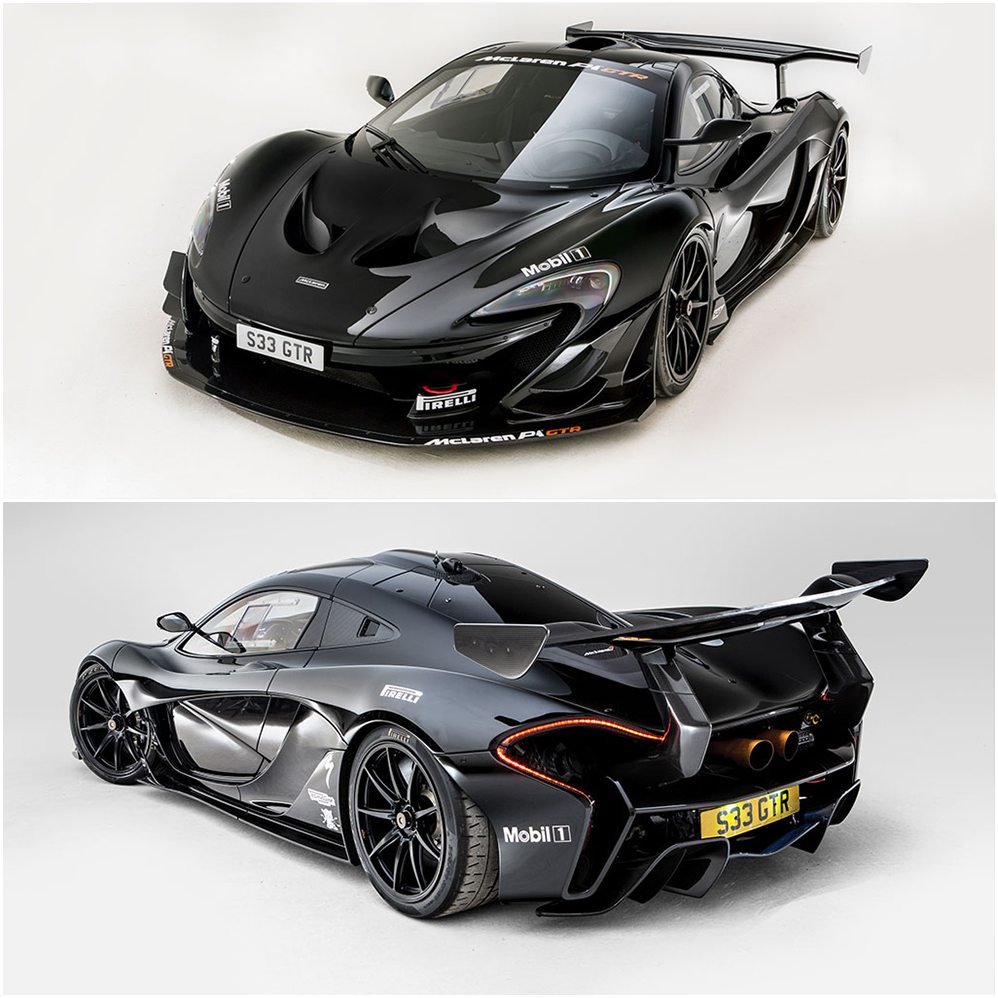 The P1 is almost impossible to get a hold of now and has been ever since McLaren discontinued the legendary, record-setting car. The GTR was only ever available to drivers that already owned the P1, so you can guess how few of them there are; only 58 were ever built. This particular version of that track only car has been converted to road legality by British restoration specialists Lanzante, making it one of 27.

A performance terror in jet black, that road conversion has lost none of the 986 brake horsepower from the phenomenal hybrid engine. You might not get the host of McLaren track days that originally came with the car but seeing as you can actually take it on the road you won’t miss them. With just 360km on the clock, it’ll also stay on the road for a good while yet; www.rmsothebys.com 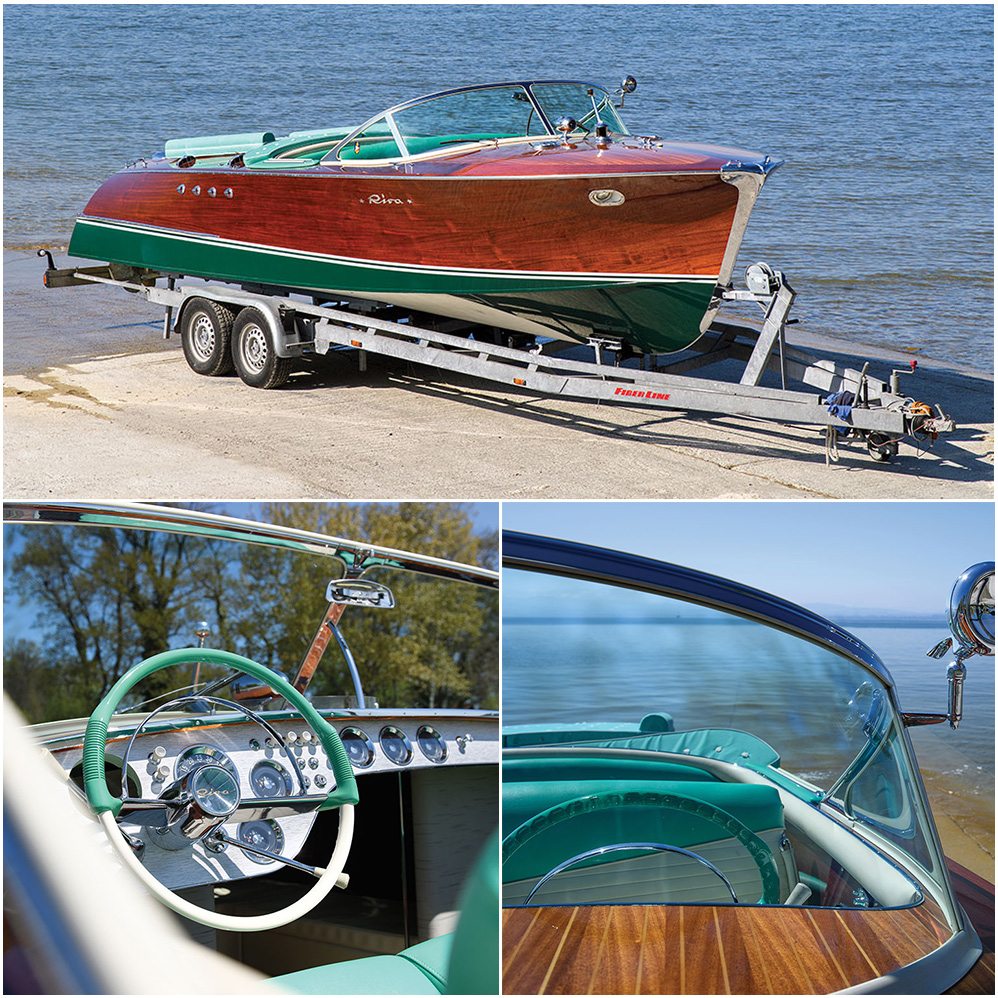 Well, we did mention that some lots had no wheels and it was either going to be a boat or a plane. Bear in mind where the auction is however and you’ll see why this particular lot stands out so much. A Riva on Lake Como just feels right, harking back to the pure glamour of the 60s.

Indeed, even though it’s been through a few owners in its lifetime, the 8.02m Tritone has spent nearly all its time meandering across the Italian lakes. Over the past few years it’s undergone considerable painstaking restoration, refurbishing the twin Chrysler engines and touching up the iconic mahogany woodwork and bi-colour interiors, bringing it back to its original charming self. On sale two months after the passing of Carlo Riva – and bearing his signature – Lot 121 embodies pure Italian elegance; www.rmsothebys.com 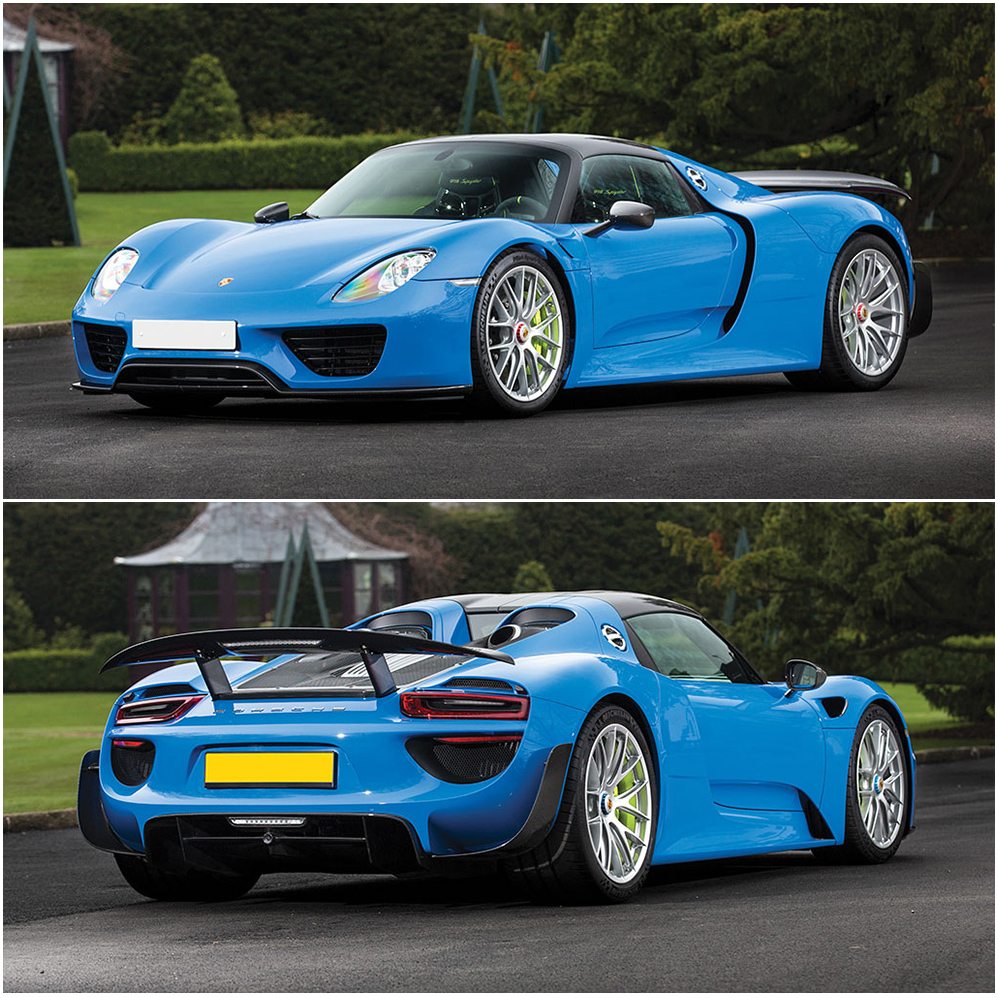 Given how famous Porsche’s Arrow Blue is among collectors, it seems insane that the colour has never been used on a 918. Well, except for this one of course. One of the most extreme cars Porsche has ever built, the 918’s performance is nothing short of ludicrous, especially when kitted out with the Weissach package, further enhancing its exceptional specifications.

The first thing that comes to mind with auction cars is how hard they were used by the previous owner. In the case of this particular 918 it was driven well and regularly, but taken care of. Indeed, other than the 11,000 kilometres on the dashboard you’d be hard-pressed to tell it isn’t new, especially after a full service earlier in the year complete with new, Weissach-specific brake discs. Rare, powerful and good as new: what more could you ask?; www.rmsothebys.com 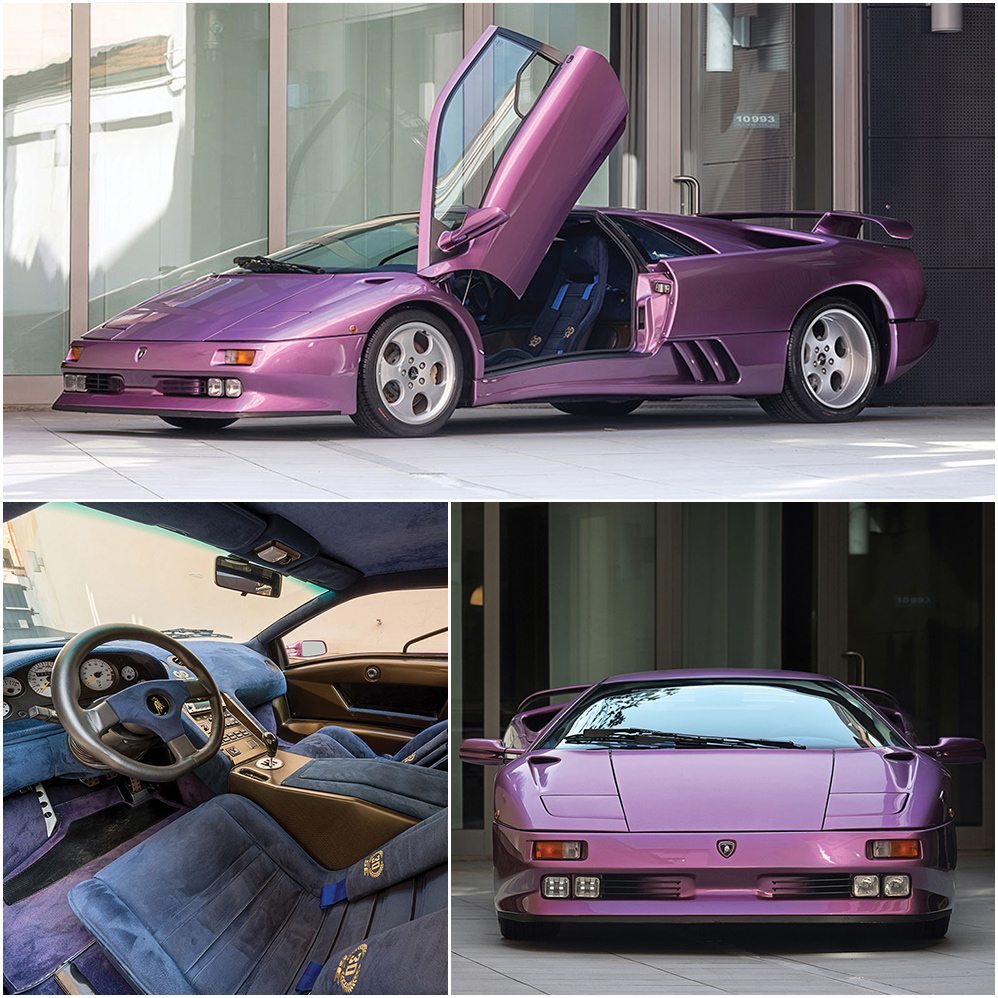 Lamborghini has never been subtle even before the Huracan and Aventador took centre stage in the marque’s line-up. The Diablo was a particularly aggressive looking model and this SE30 – created to commemorate Lamborghini’s 30th anniversary – took that to the extreme with a more racing-oriented kit.

This particular car has seen its fair share of racing, participating in multiple rallies throughout Italy with its first owner and has passed from collector to collector until it’s upcoming sale. The first of the 150 SE30s built, it’s pure Lamborghini, from its straked brake cooling ducts to its colossal rear spoiler – elements that you’ll find on current models. And let’s be honest, who doesn’t want a bright metallic purple Diablo? Subtlety be damned; www.rmsothebys.com 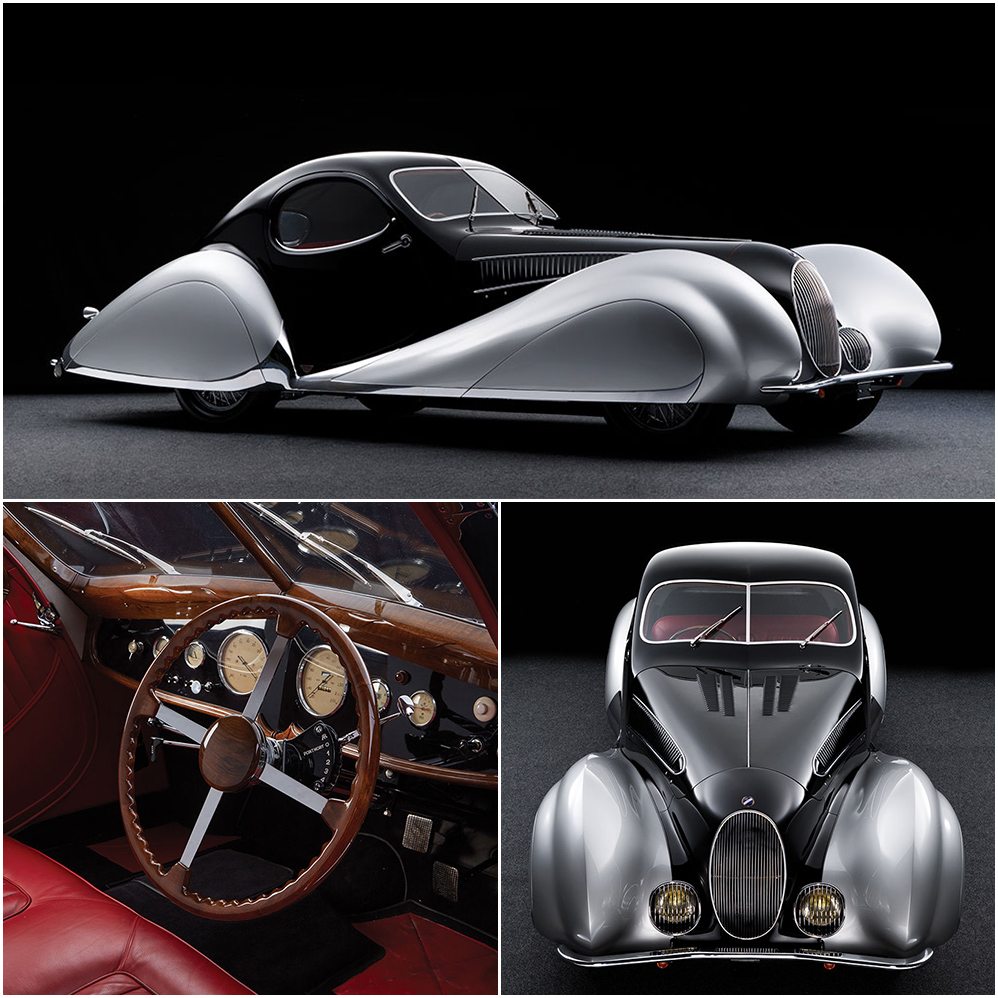 With a lower estimate of €3,200,000, this is one of the most important lots of the entire Villa Erba auction and as its one of the last examples of the acclaimed Talbot-Lago ‘teardrop’ coupé that estimate seems low. It is without a doubt one of the most beautiful cars ever built.

The fact that this car even exists is a spectacular feat of serendipity. It not only survived the war years but did so with relatively little damage – though it’s assumed it suffered some. That only two were ever built in the first place elevates the Goutte d’Eau to mythical levels of rarity. Not only will it be the centrepiece of any concours it enters, you’re highly unlikely to run into another one on the road; www.rmsothebys.com