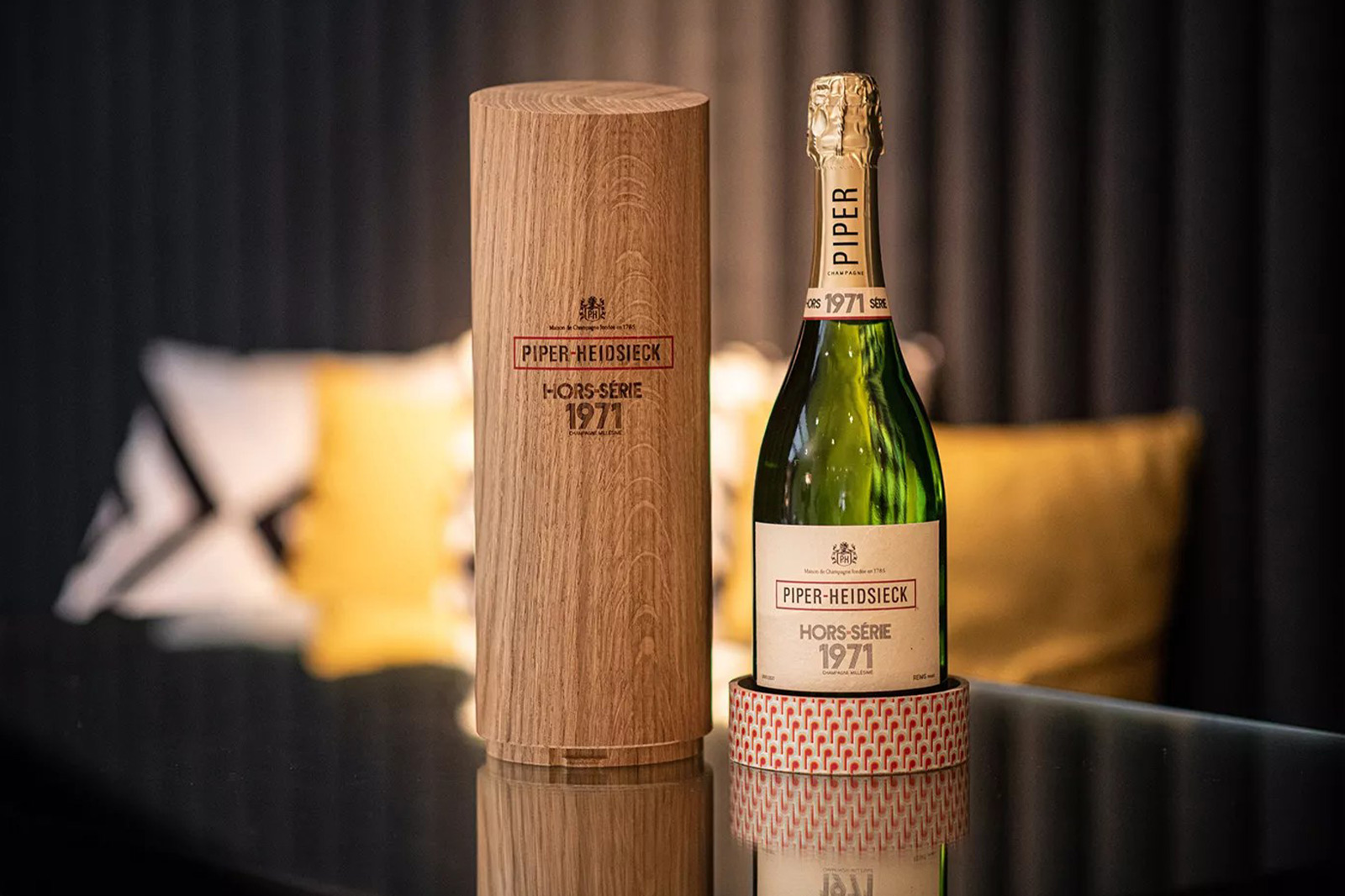 Before we get into what I consider one of the finest wines I’ve ever tasted, it’s worth taking the time for a bit of a booster lesson in what we mean by vintage Champagne. Champagne, perhaps more than any other region in the world, is the most regulated in terms of the production of its wines. This framework of rules runs from how you grow your vines, tend them, pick your grapes and how you vinify them. This gives great reassurance to the collector or drinker that the contents of the bottle they are about to consume will satisfy, in terms of quality and authenticity.

Vintage Champagne takes this quality to a higher level. It should also be seen as a declaration by the winemaker of an outstanding year for their grapes transitioning into the resulting wine. It is important to note that not all Champagne houses will declare a vintage in the same year due to the different geographic locations of their vines. Think of a bottle of vintage Champagne as a whole year of weather, changing seasons and the skill of the Chef de Cave of that year brought together in a 750ml time capsule. The power of a good vintage is its capability to transport you, instantly back to a snapshot of a particular given year. 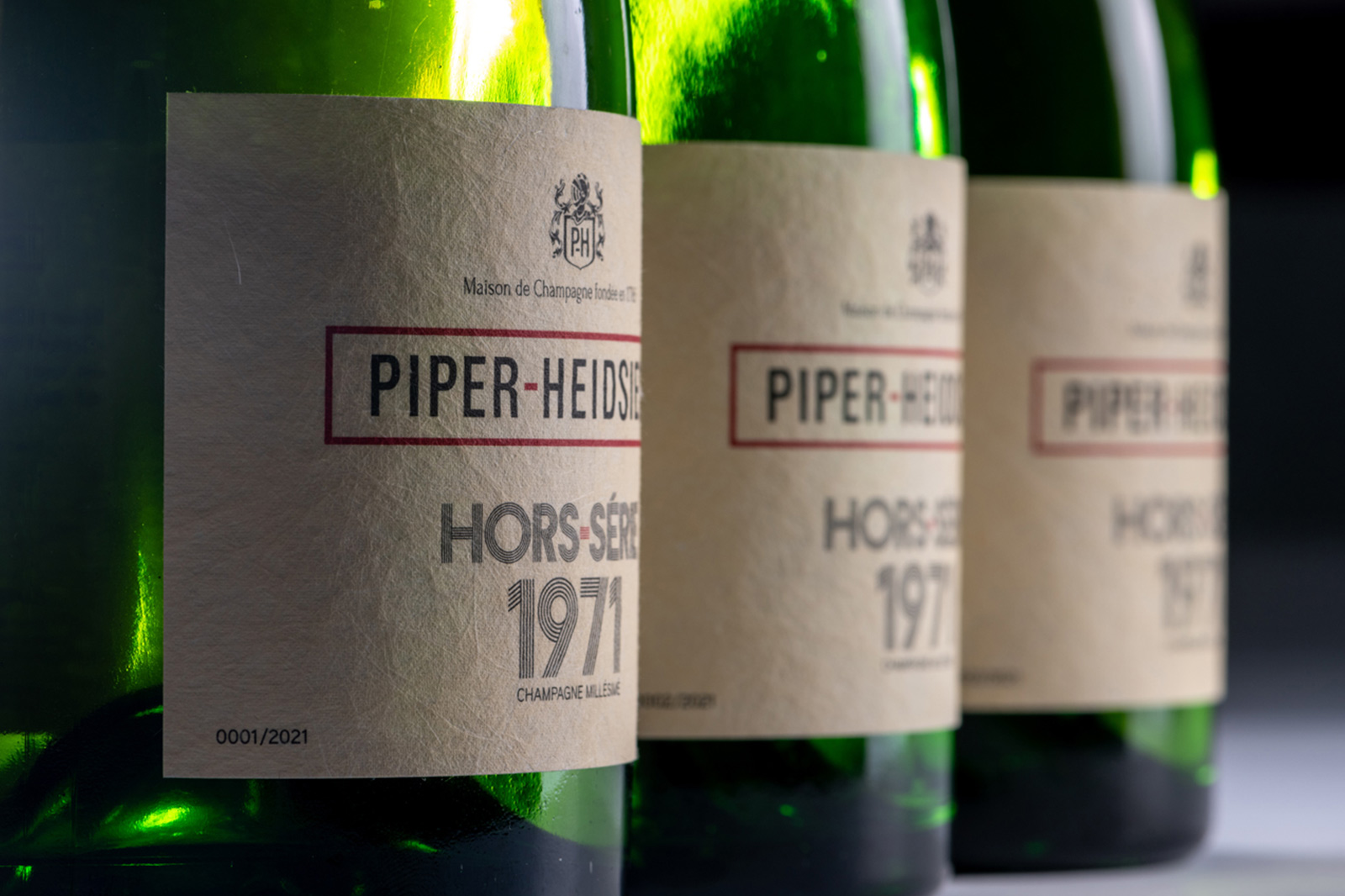 The rules of Champagne state that a vintage bottle must have spent at least three years on its own ‘lees’, the deposits of sediment which are mainly yeasts that remain after fermentation. Through the process of autolysis, all of the sugars in the wine are consumed and the yeasts gradually die and decompose, releasing molecules that slowly transform as they interact with the wine.

These add many of the autolytic flavours such a brioche or biscuit qualities that we associate with Champagne. Due to the long maturing process, these are more pronounced than in non-vintage Champagnes which only spend a minimum of 12 months with the wine contacting the lees. It is worth noting that European wine legislation requires only 90 days for effervescent wines in general. 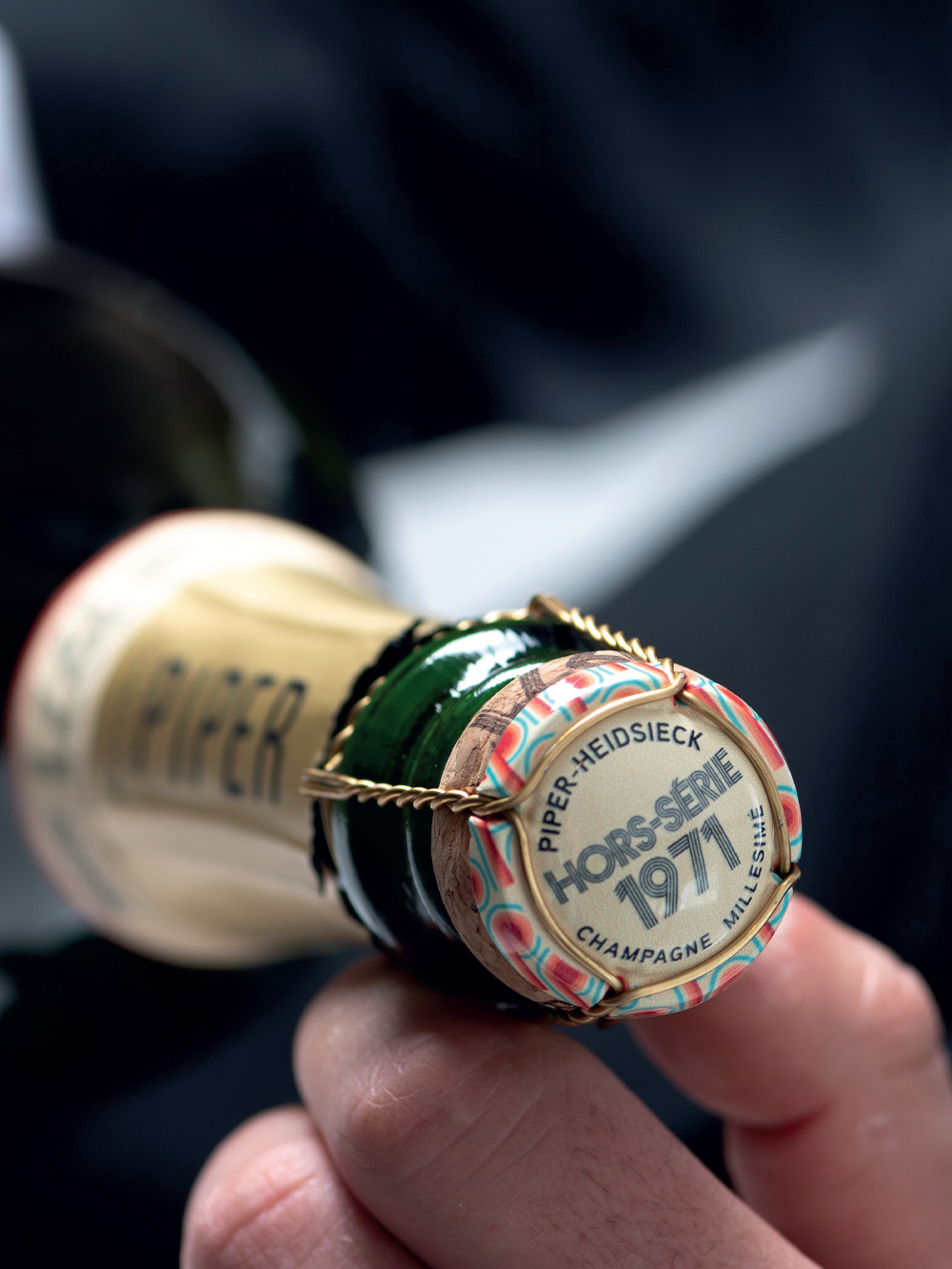 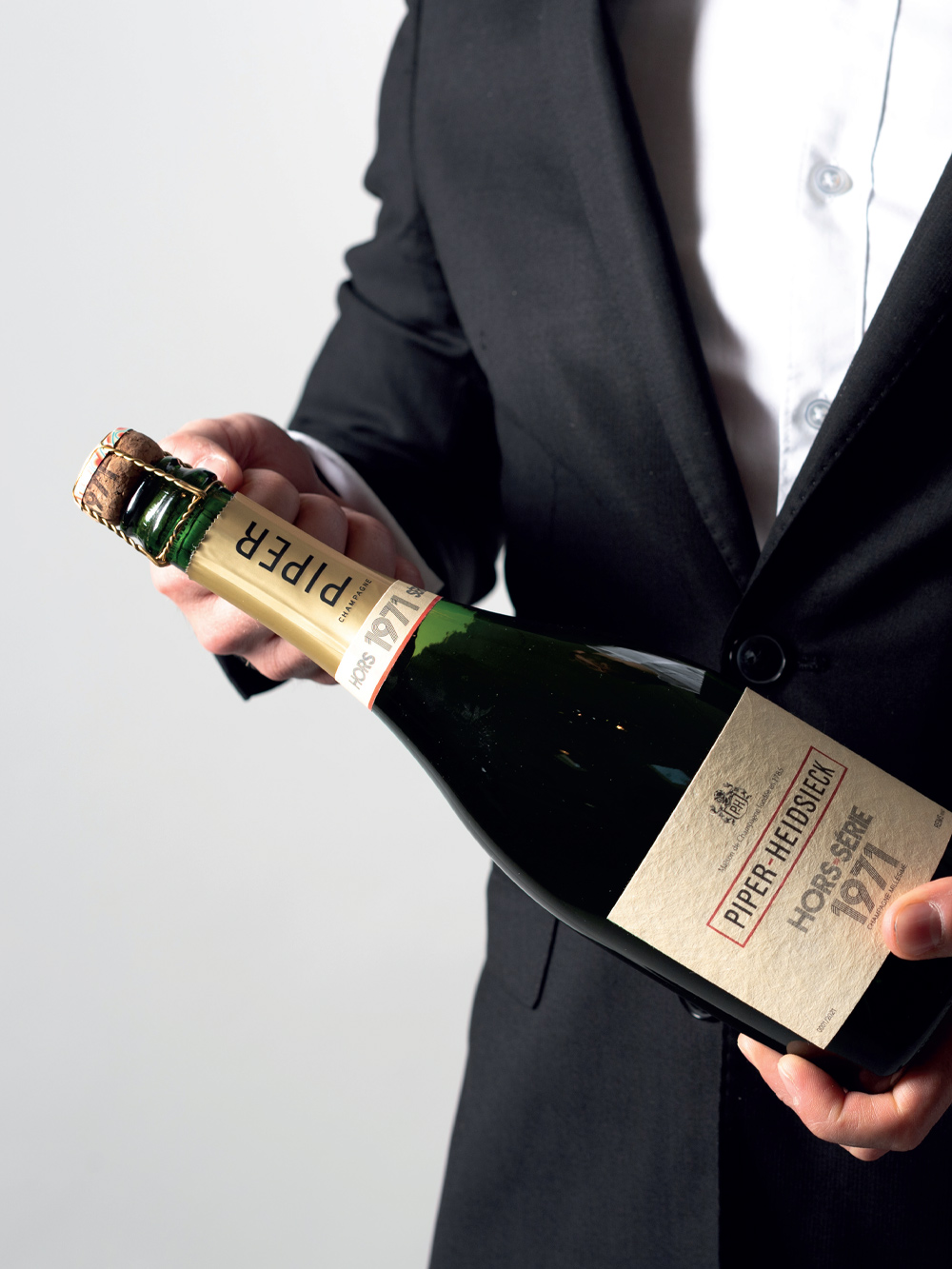 The special ‘tirage stopper’ that seals the bottle at this point in its life allows tiny amounts of oxygen to enter the bottle and for small amounts of carbon dioxide to escape. In other words, the seal at this stage is not perfectly airtight. The choice of stopper helps determine the speed of the Champagne’s development and slowly oxidises the wine. These processes complement each other especially well in Champagne wines because of their delicacy and the effect they have through such gentle ageing is to add further aromas and flavours.

After careful storage and sampling over the years, a cellar master will decide if a vintage is ready to be released. Imagine the excitement in the chalk cellars or ‘crayéres’ beneath Reims three months ago when Émilien Boutillat, the chief winemaker at Piper Heidsieck, decided that the Hors-Série 1971 vintage was ready to be brought off its sediment, the sparkle to be added and acknowledged to be ready for market. By this time, the Champagne had been through the caring hands of four cellar masters over five decades and now launches a new collection of carefully selected vintage Champagnes under the Hors-Série banner. 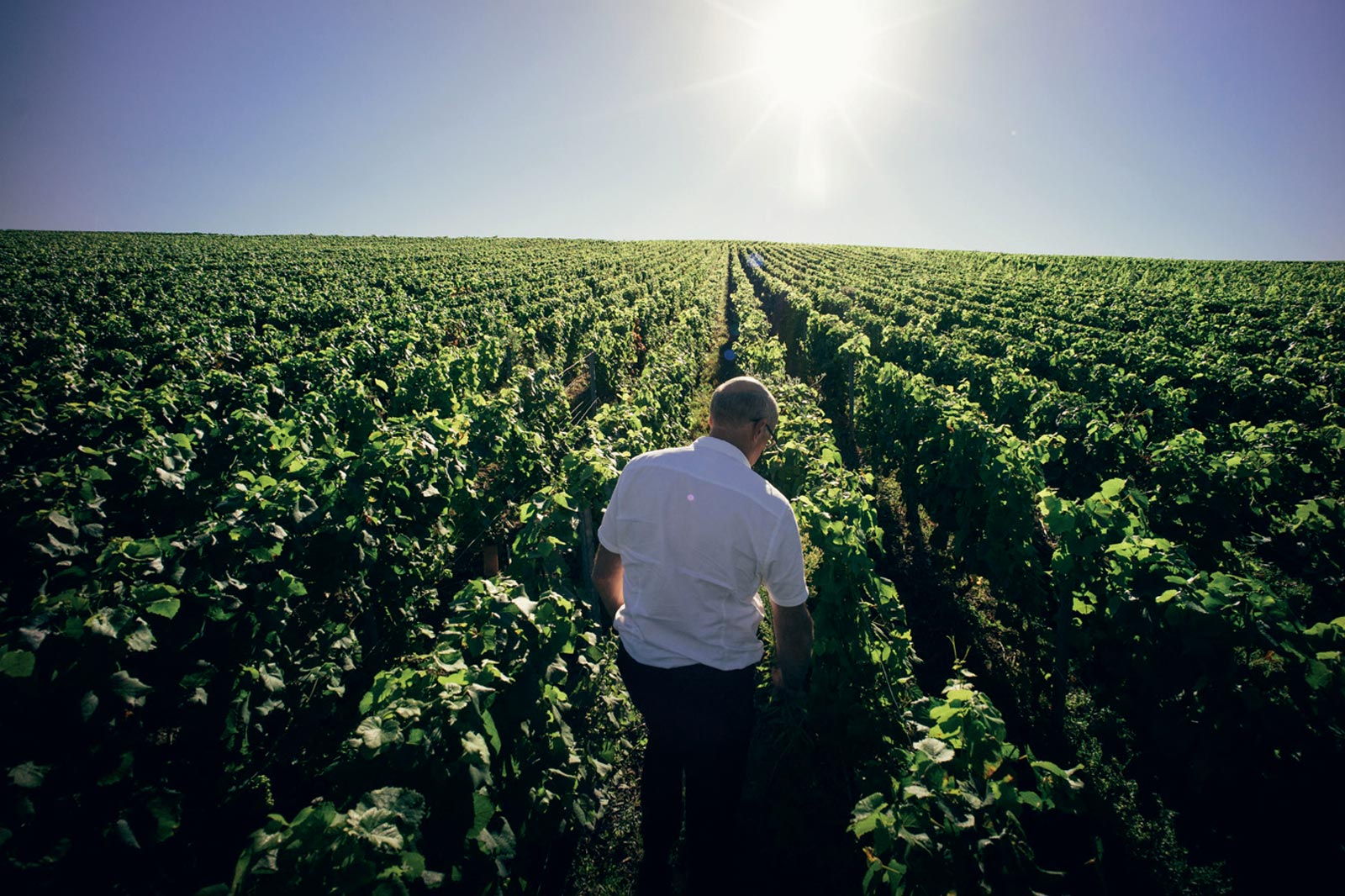 To remove the remaining sediment the neck of the bottle is frozen with liquid nitrogen and the resulting plug of ice is fired from the bottle by releasing the stopper. This process is called disgorgement and allows the winemaker to control the time of a wines release and also to arrest to a certain degree its development. However, the removal of the yeast deposits results in a loss of a small amount of wine in the bottle and its effervescence. This loss is topped up using a ‘liquor de dosage’ which can be a further factor to be used in determining the final sweetness of the wine and also some of its characters. This also allows a natural second fermentation to take place in the bottle, creating the bubbles we all crave.

In the case of Piper Heidsieck Hors-Série 1971, the challenge for Émilien was to concoct a liquor that was balanced in both acidity and sweetness, allowing the resulting top up to allow for bubble production while complimenting and not dominating the original matured wine. Add to this, a choice of any of the still wines from Champagne from the many plots at his disposal, and also a selection of sugars to choose from and you can see how subtly wines can be honed. You can now almost think of vintage Champagne as having further manipulative complexity; not just as a snapshot of a particular year but with the storage as patina and ageing of the photographic paper and the ‘top up’ as a very subtle filter that enhances and compliments the original image. 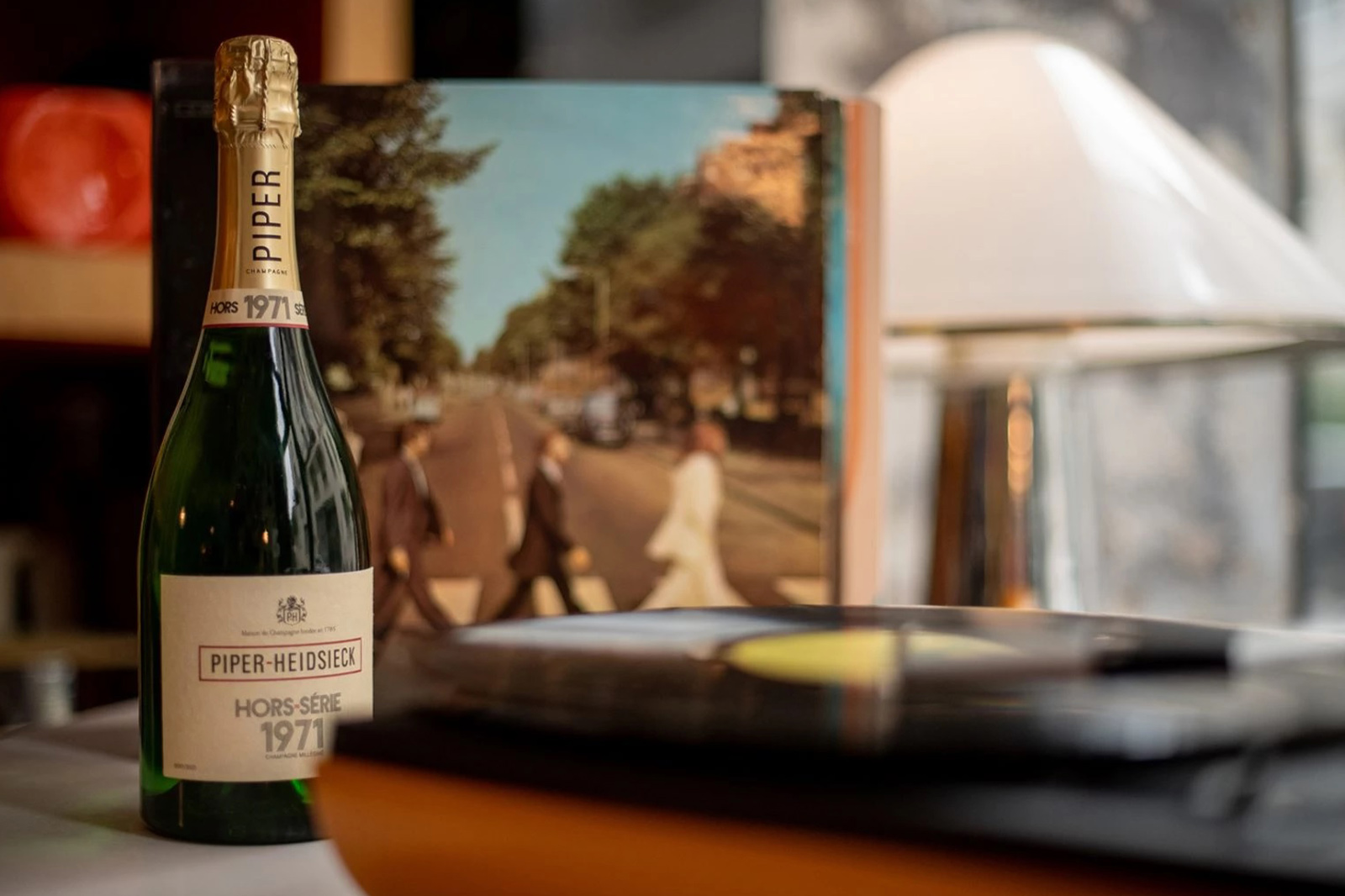 On receiving one of just six glasses poured in London, the first thing you notice is the copper edged, deep golden colour. As you would expect with a 50-year-old Champagne the effervescence is discrete and the bubbles are small and gentle. The nose is of Dundee cake, damson and fig. This is undoubtedly one of the most luxurious and aromatic Champagnes I have ever smelt. As the aromas develop they move through liquorice, coffee, cloves, dark chocolate with hints of the Orient and dried flowers. Then follows the biggest surprise of all, in that on the palate the freshness that is characteristic of Piper Heidsieck is still there. In my experience, some old wines can be so cloying that you want to taste them but not ‘drink’ them. 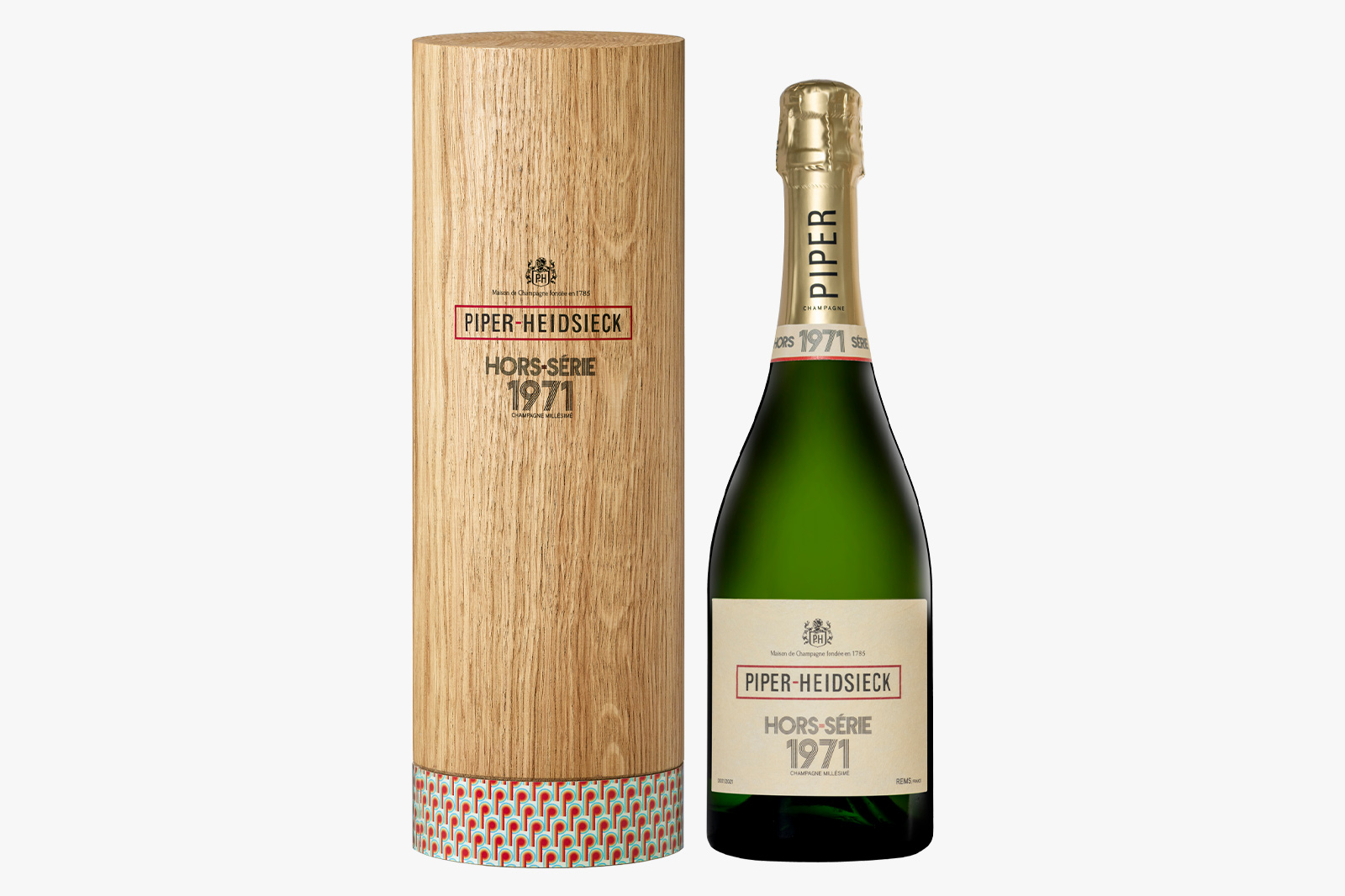 Piper Heidsieck Hors-Série 1971 is undoubtedly a ‘drinker’, plucked by Émilien at just the right moment and given the twist of a sorcerer’s touch. In the mouth, there is pleasant, balanced acidity and a luxurious long velvety finish with vibrant citrus notes. Hors-Série 1971 is an exciting and invigorating wine that is taut and begs to be drunk in front of an open fire. Accompany a glass with a slice of Comté cheese topped with grated ginger and turmeric or match at dinner with lamb or monkfish.

Just 2,021 bottles are being released of this first in the new collection with a subtle nod to the 1970s on its bespoke oak presentation box. So, buy it, but quickly, as after 50 years of slumber, this is a bottle of Champagne that is ready to party seventies style.

Price: £400 (though retailers may vary). More details at Piper Heidsieck. With just days to go until the celebratory period is here (and we can meet people in person this... Drink and be merry… the perfect Christmas gifts for the drinks lover. Dekanta Kyōyū World Blended Whisky, £273 Kyōyū is the Japanese word for sharing and it is a...