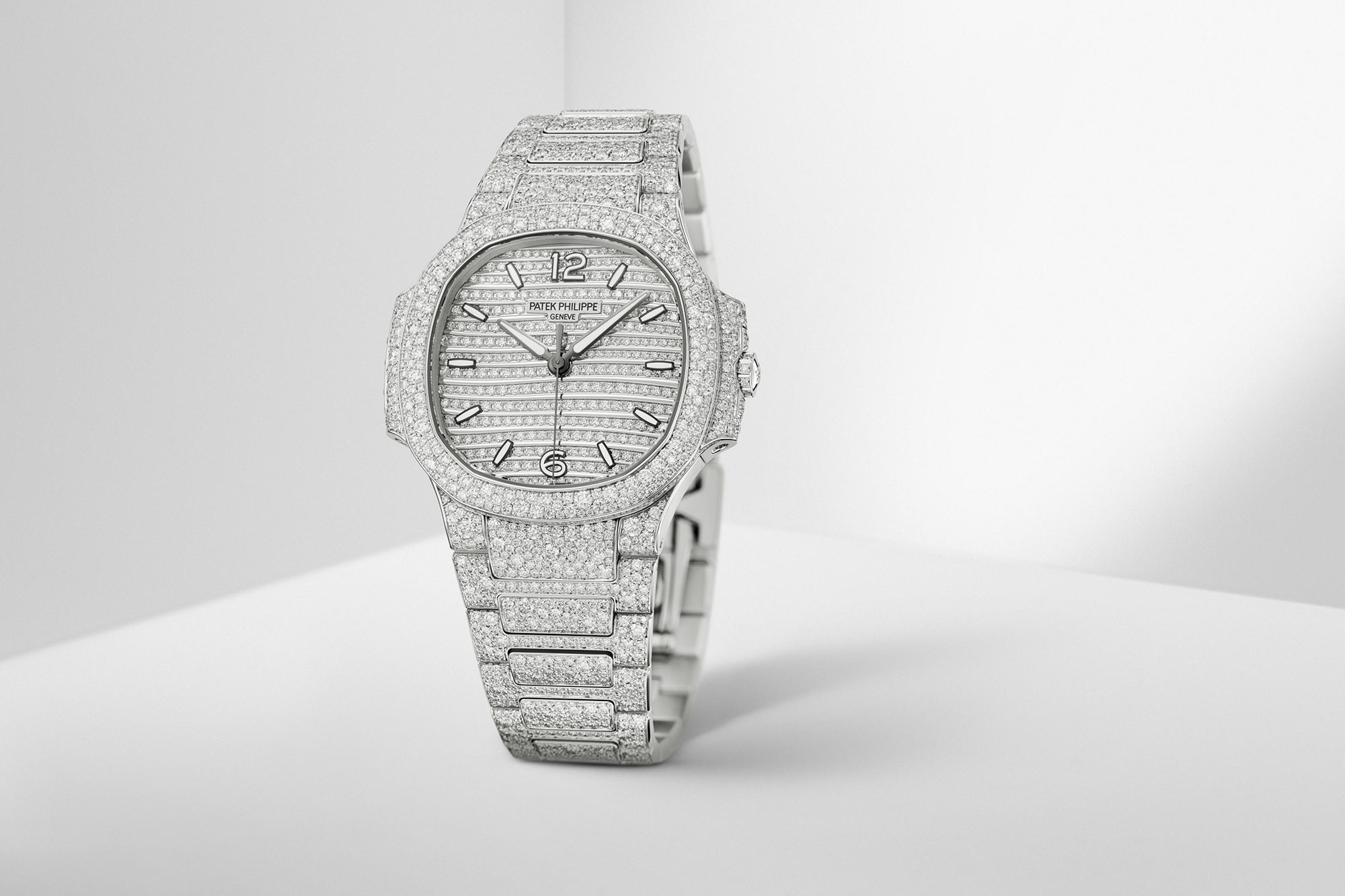 Patek Philippe may very well be the kings of 2021. They’re certainly in the running for most watches released, and the Rare Handcrafts showcase has given them an excuse to let loose their more artistic side with a range of unique or limited Métiers d’Art watches. That’s as well as the new Golden Ellipse and Haute Joaillerie Nautilus that were announced alongside the Sky Moon Tourbillon and minute repeater Grand Complications. 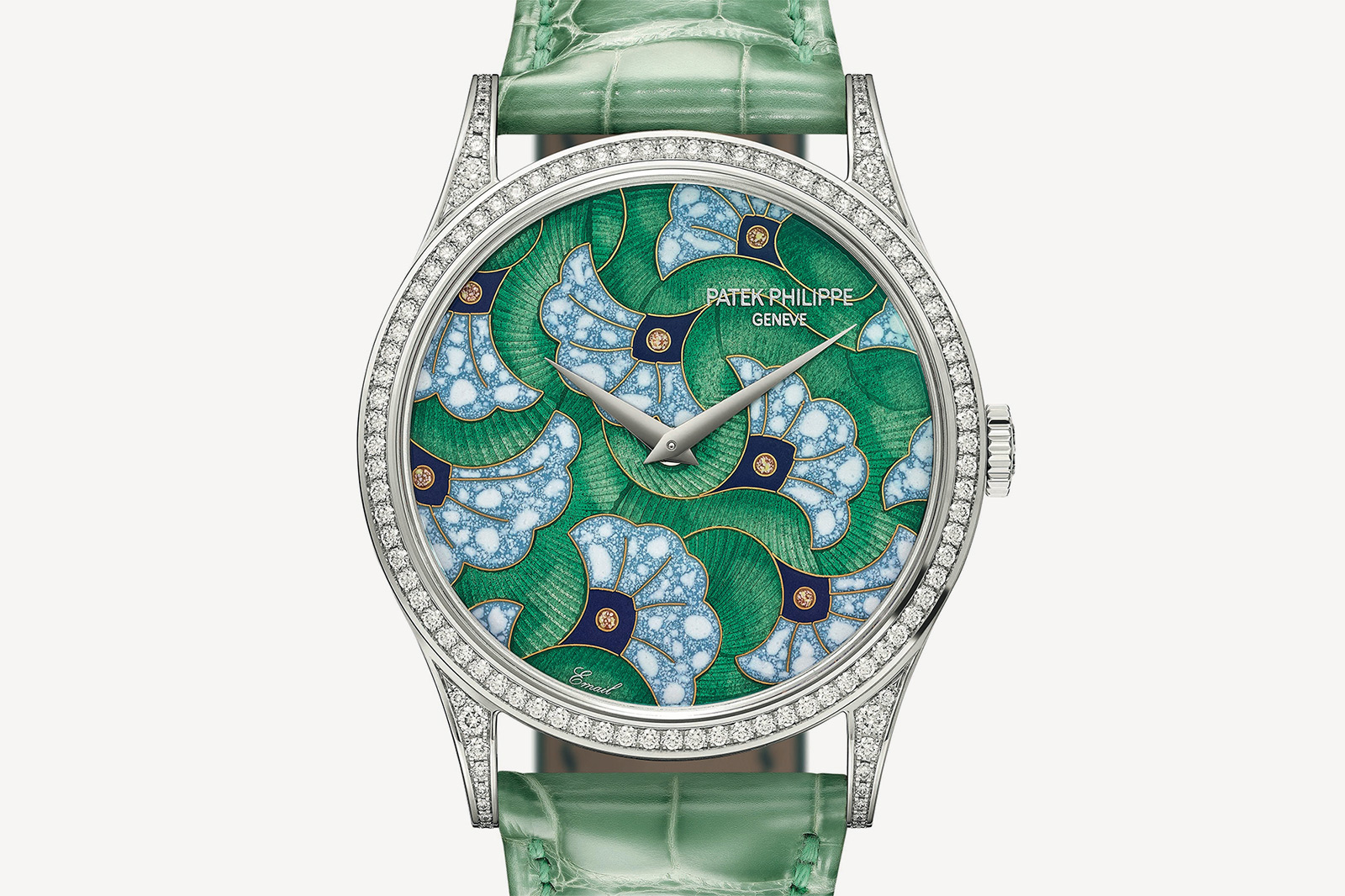 To kick things off we’ll take a look at the enamel artwork watches that use various versions of the Calatrava as their canvas. It’s a great watch for these kinds of artisanal displays because the cases are very simple and elegant, which means they won’t detract from the intricate art.

For the artworks themselves, the majority use cloisonné enamel, a technique where 24k thin gold wire is used to create shapes that are then filled with grand feu enamel. There are also a couple of flinqué enamel pieces and miniature painting in the range, which each achieve a slightly different type of finish. These watches are meant to be visually enjoyed so I’ll shut up and let you take a look. 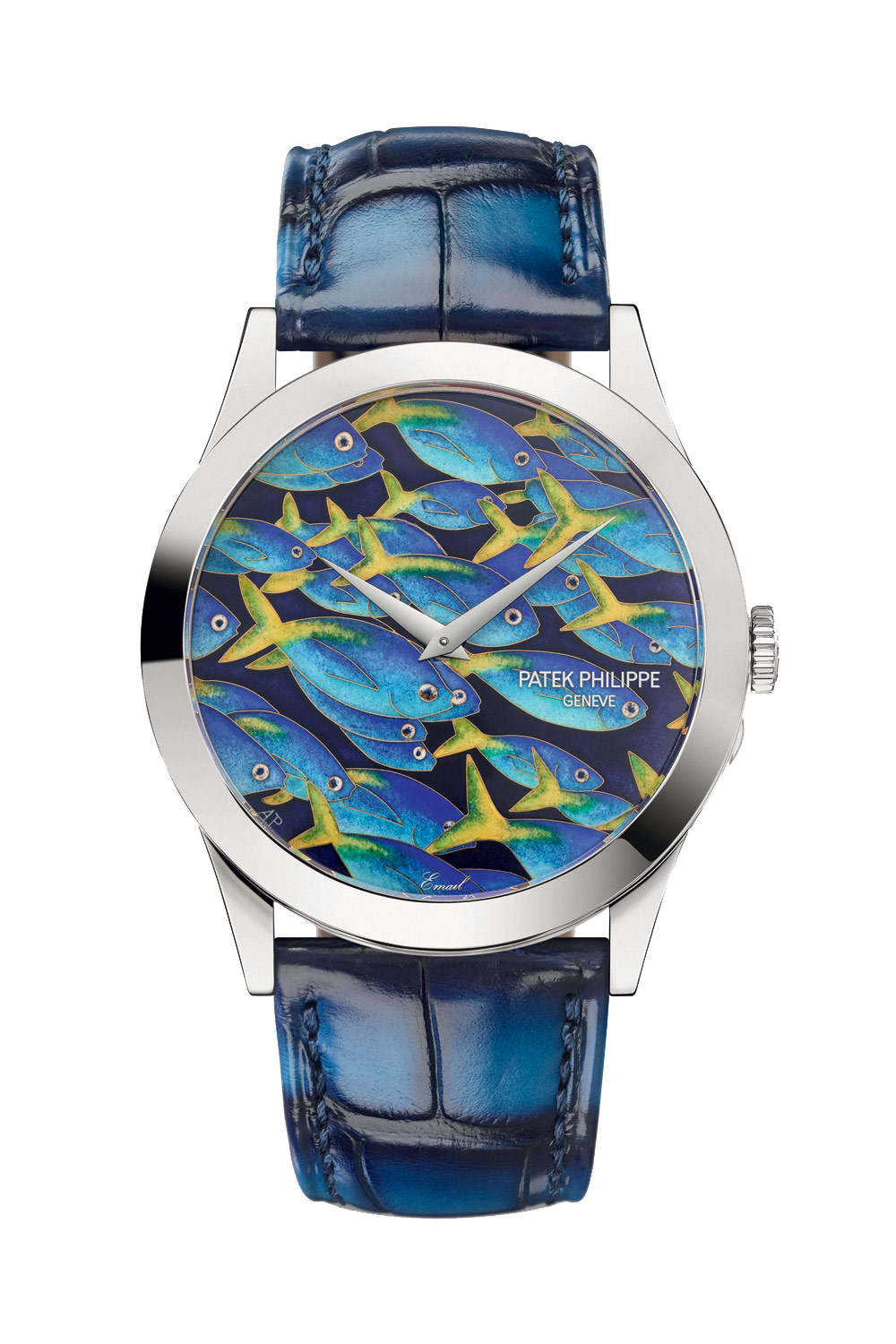 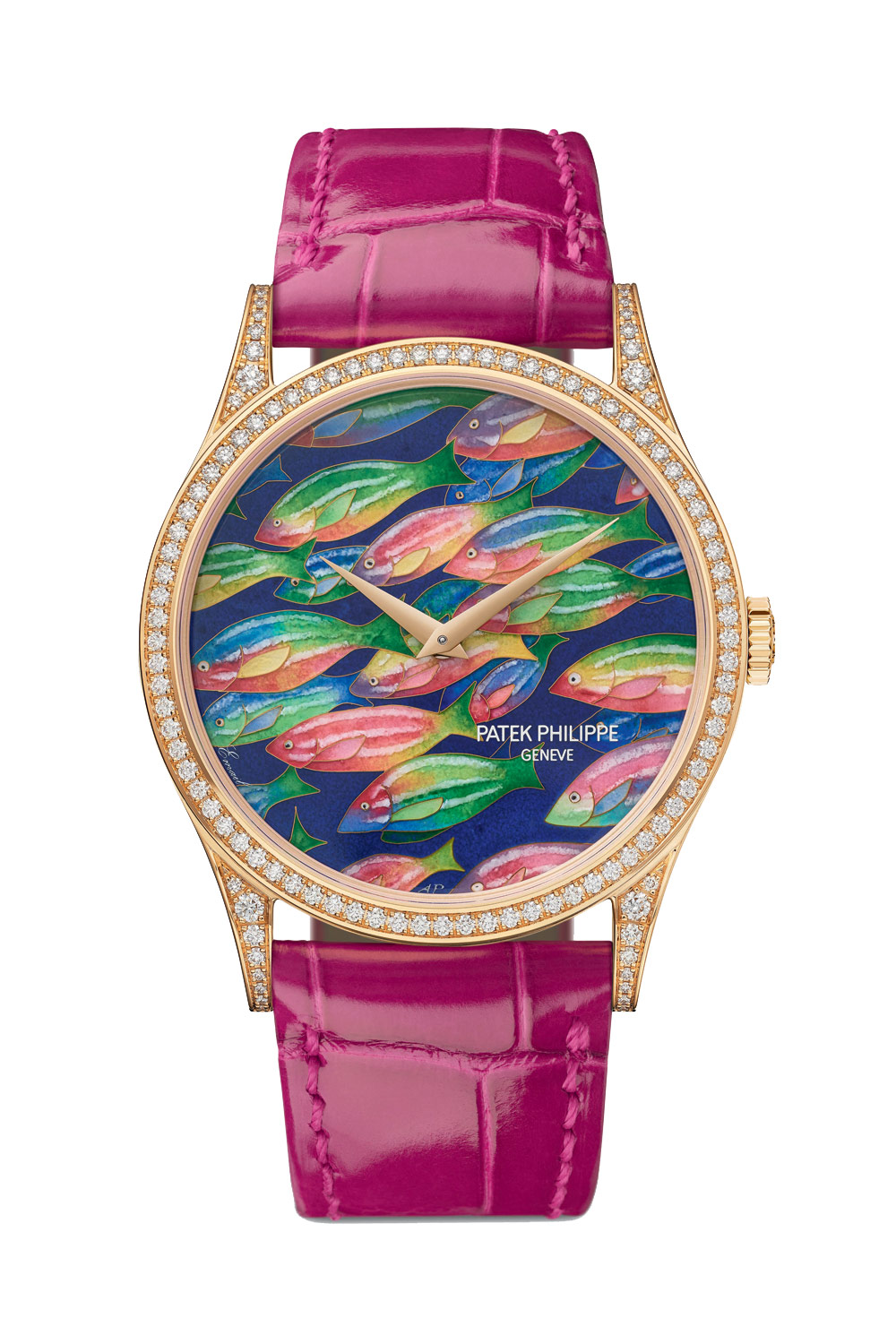 This trio of Calatravas are presented in red gold with a diamond bezel, white gold and white gold with a hobnail bezel respectively and depict brightly coloured fish in red, blue or green, swimming in the ocean. The richness of colour that can be achieved with cloisonné enamel is particularly evident. 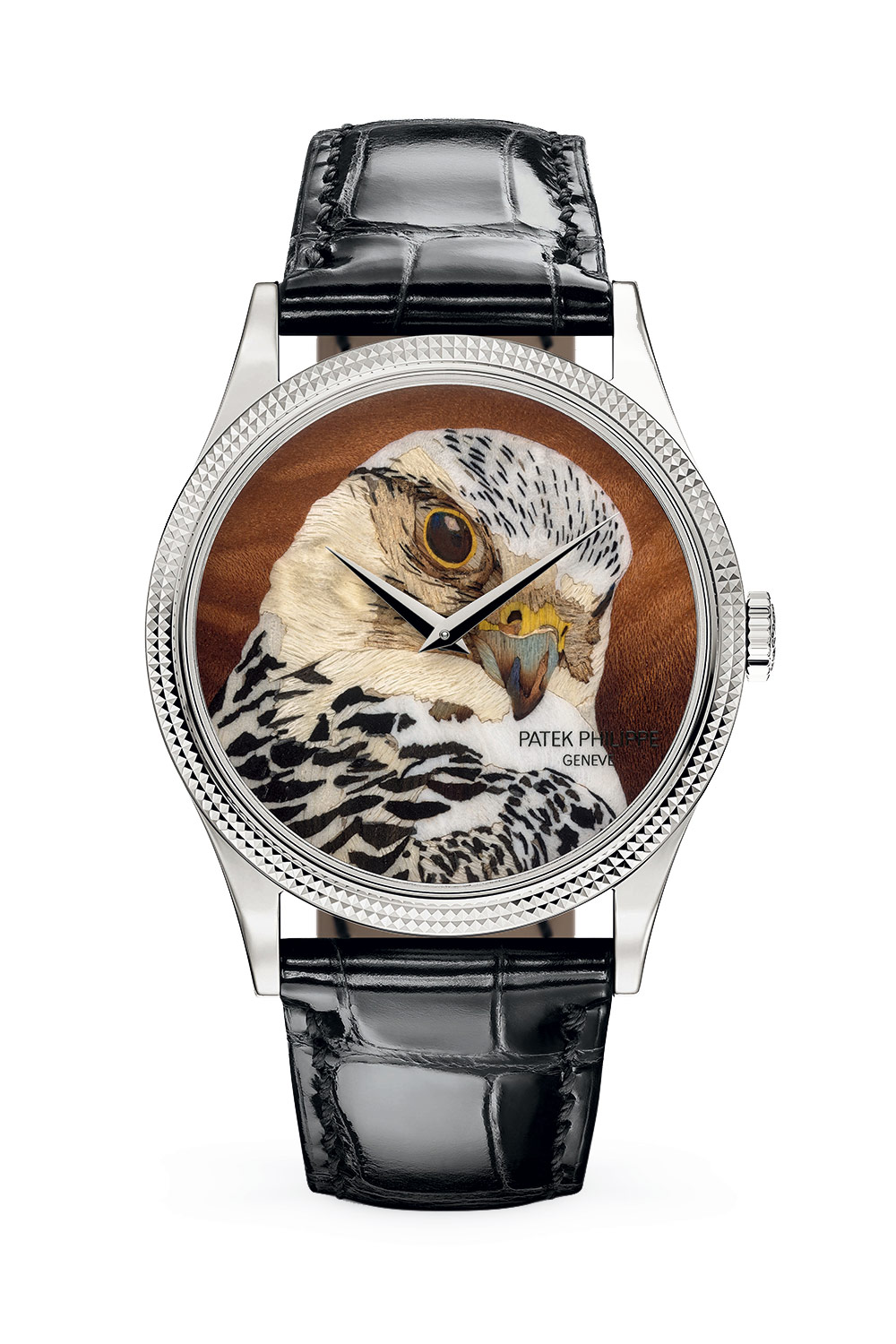 Moving away from enamel, this stunning falcon’s head has been created using the art of marquetry, a form of miniature sculpture. The bird is composed of 168 separate pieces of wood from 20 different species of tree and was created by a single marquetry specialist. It’s housed in a white gold Calatrava with a hobnail bezel. All of the art timepieces here use the same ultra thin calibre 240 automatic movements. 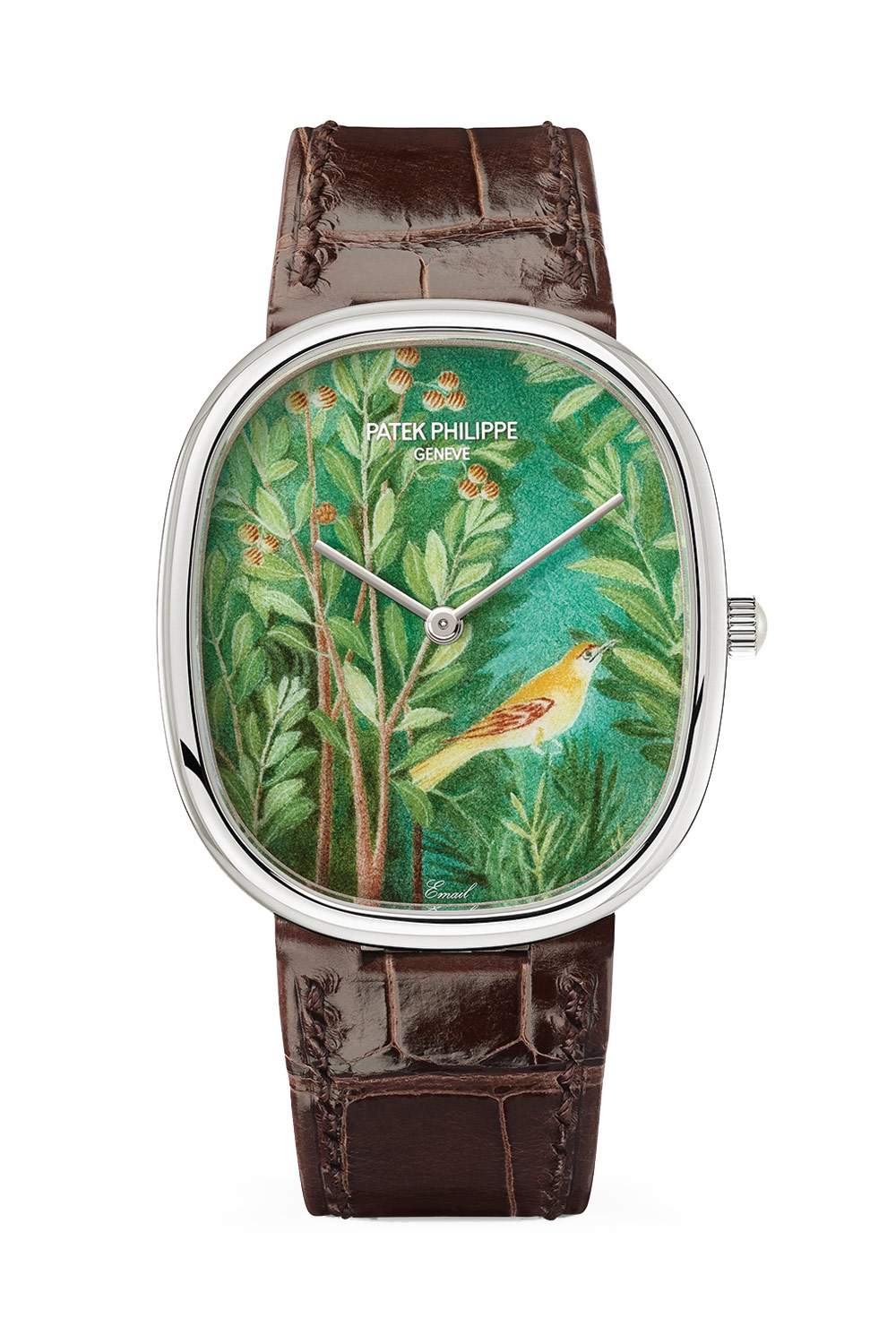 The Golden Ellipse wristwatch simply begs to be adorned with artwork – its case dimensions and shape were designed with the golden ratio in mind, a mathematical formula that helps determine beauty in art and architecture. It also provides a larger canvas for artists to play with, with a 34.5mm x 39.5mm sizing, letting them really go to town. 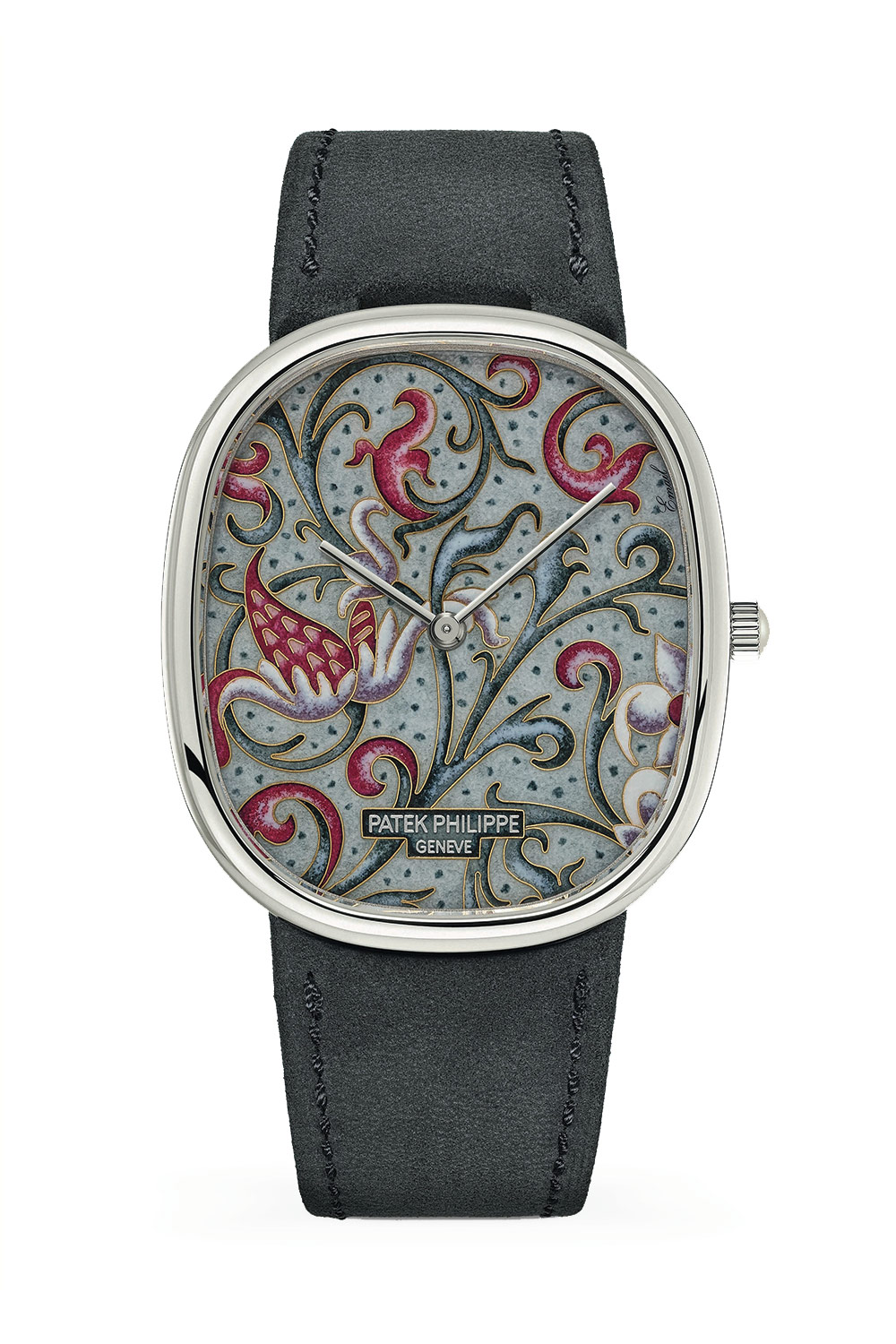 This Golden Ellipse in white gold has a cloisonné enamel dial depicting medieval style ornaments and plants on a light blue background. The pattern is inspired by the illustrations that can be found on manuscripts from the period, which were often weird and wonderful in their own ways – there is an entire study dedicated to why medieval books often featured knights riding on snails. Instead of snail knights, Patek Philippe have opted for a more refined and ornamental design centred on reed like plants. It’s probably the sensible choice. 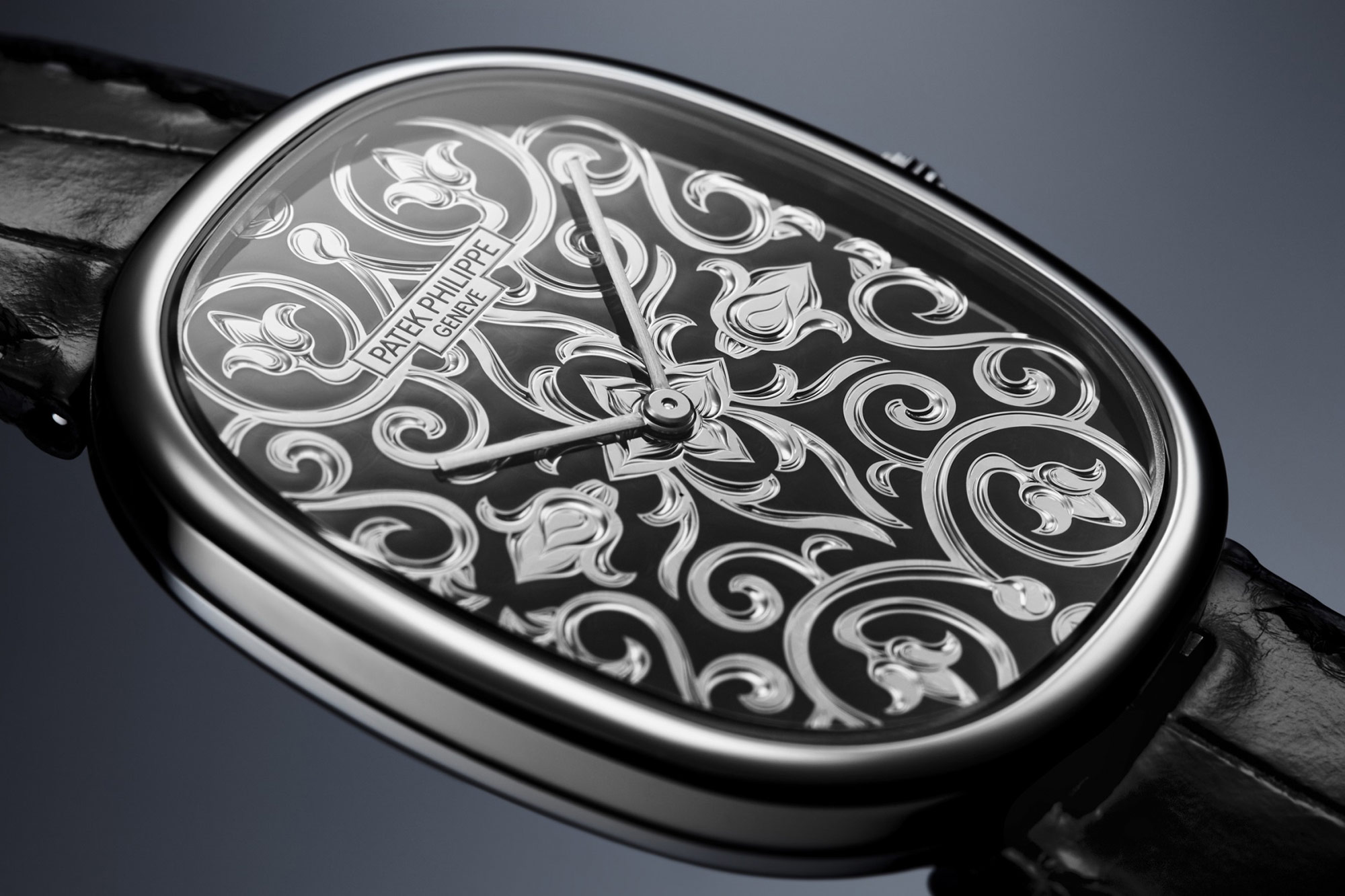 Now, the Haut Artisanat is technically in a separate category of watches to the ones we’ve looked at so far because it isn’t a limited edition and is joining the existing collection of Golden Ellipses – meaning you actually have a chance to pick one up. Just don’t expect to see them everywhere.

The case is made from white gold in the traditional proportions of 34.5mm x 39.5mm in the ellipse shape. Its dial is suitably impressive, featuring a combination of black champlevé enamel and engraved 18k gold. The gold is all one single plate that has been shaped so that the enamel fills the lowest recesses, making each section of the volute and arabesque decorations look like individual pieces applied onto the enamel. 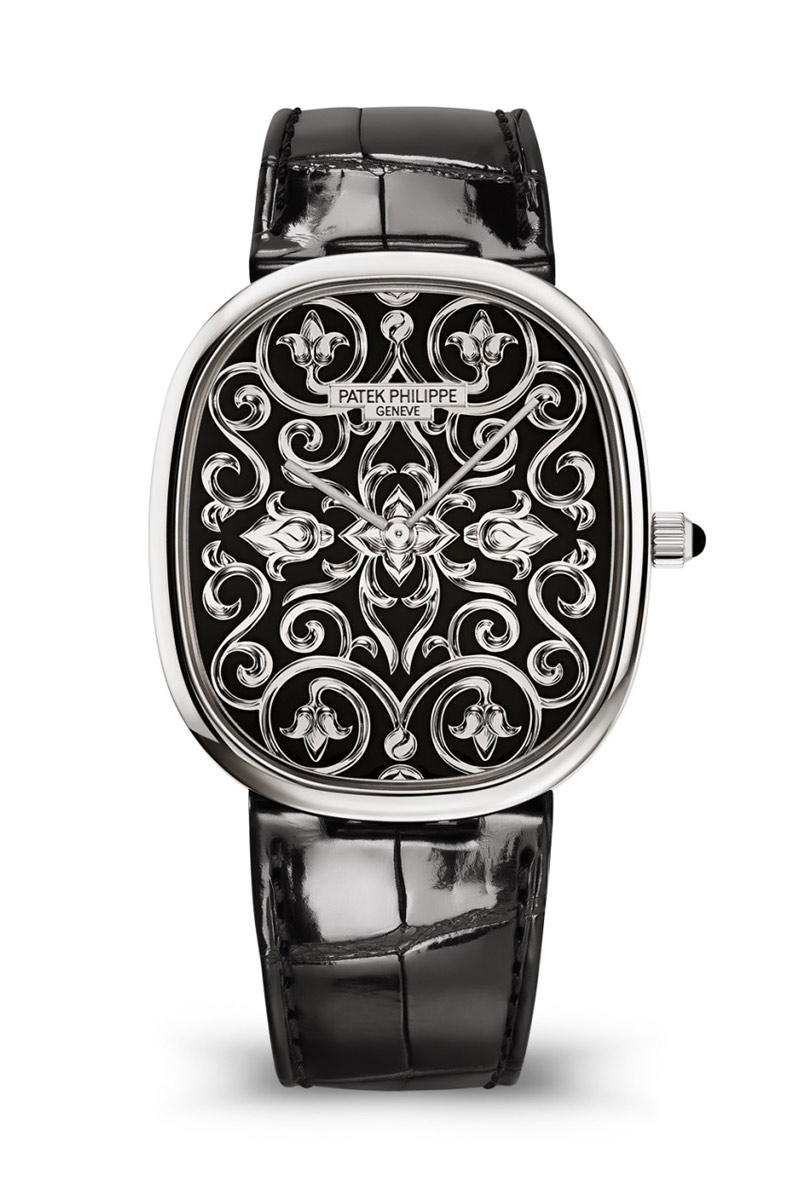 Inside is the 240 calibre, ultra thin automatic movement. You might think that because it has been used in a wealth of artistic watches – every watch on this list so far – that it probably isn’t too special, these are style focus watches and costs have to cut somewhere right? Well, this is Patek Philippe so, no. The 240 has a 48 hour power reserve despite being barely more than 5mm thick. 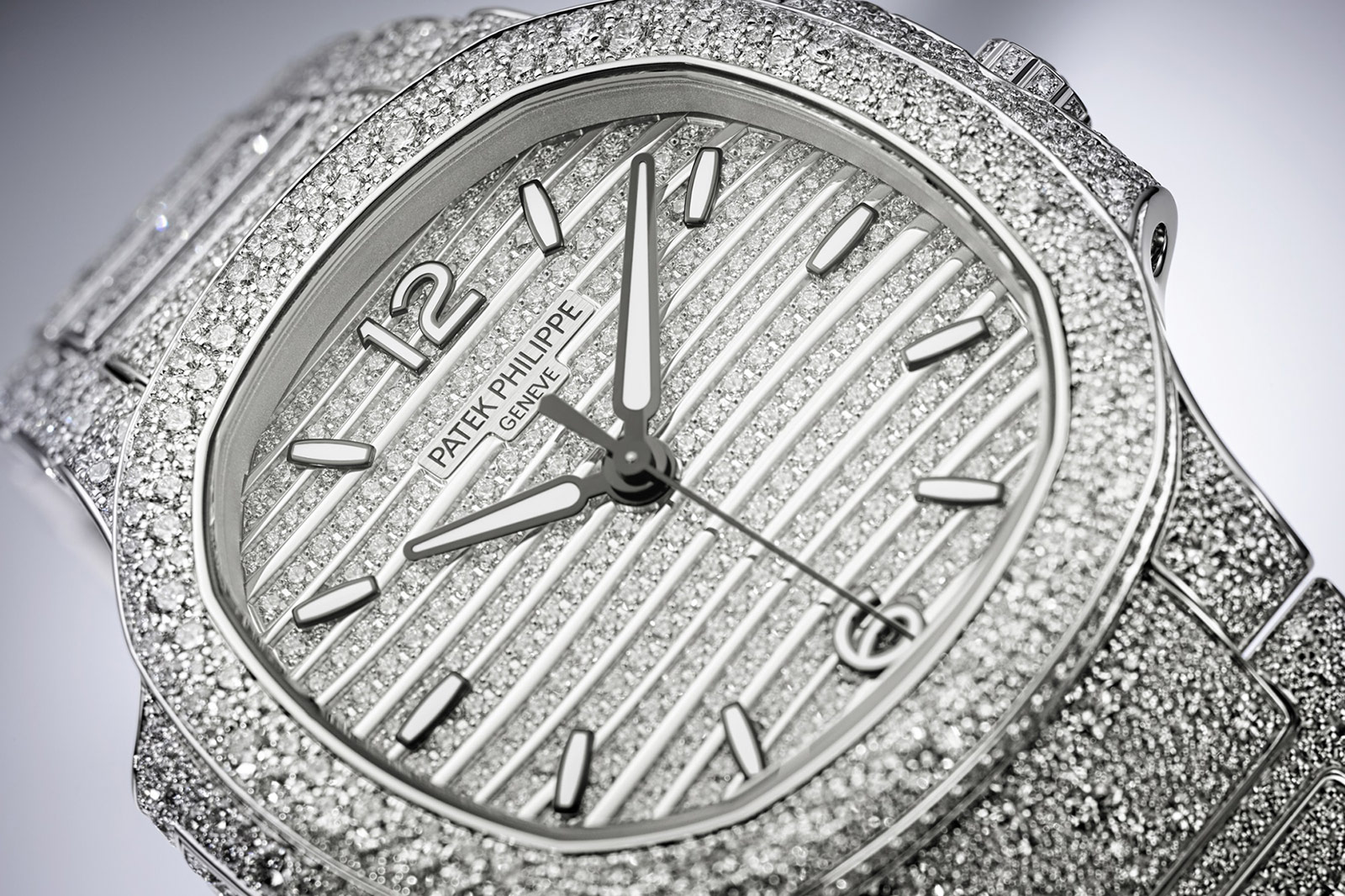 It’s time for the final watch on our list and where would we be without the sports luxe icon itself? Earlier in the year, the Nautilus took a plunge into high jewellery when, much like the Piaget Polo Skeleton Gold Collection, it abandoned any pretence to sportiness and jumped headfirst into a bucket of diamonds. This latest version takes the same jewel encrusted style and reimagines it in white gold.

There are 2,553 flawless Top Wesselton brilliant cut diamonds on the Nautilus, reaching 12.69ct. They have been set using a technique known as ‘snow setting’ also referred to as random pavé, which means there is no order to the diamonds and different sizes have been placed next to each other in an attempt to cover as much of the gold as possible and leave no gaps – making each dial unique. 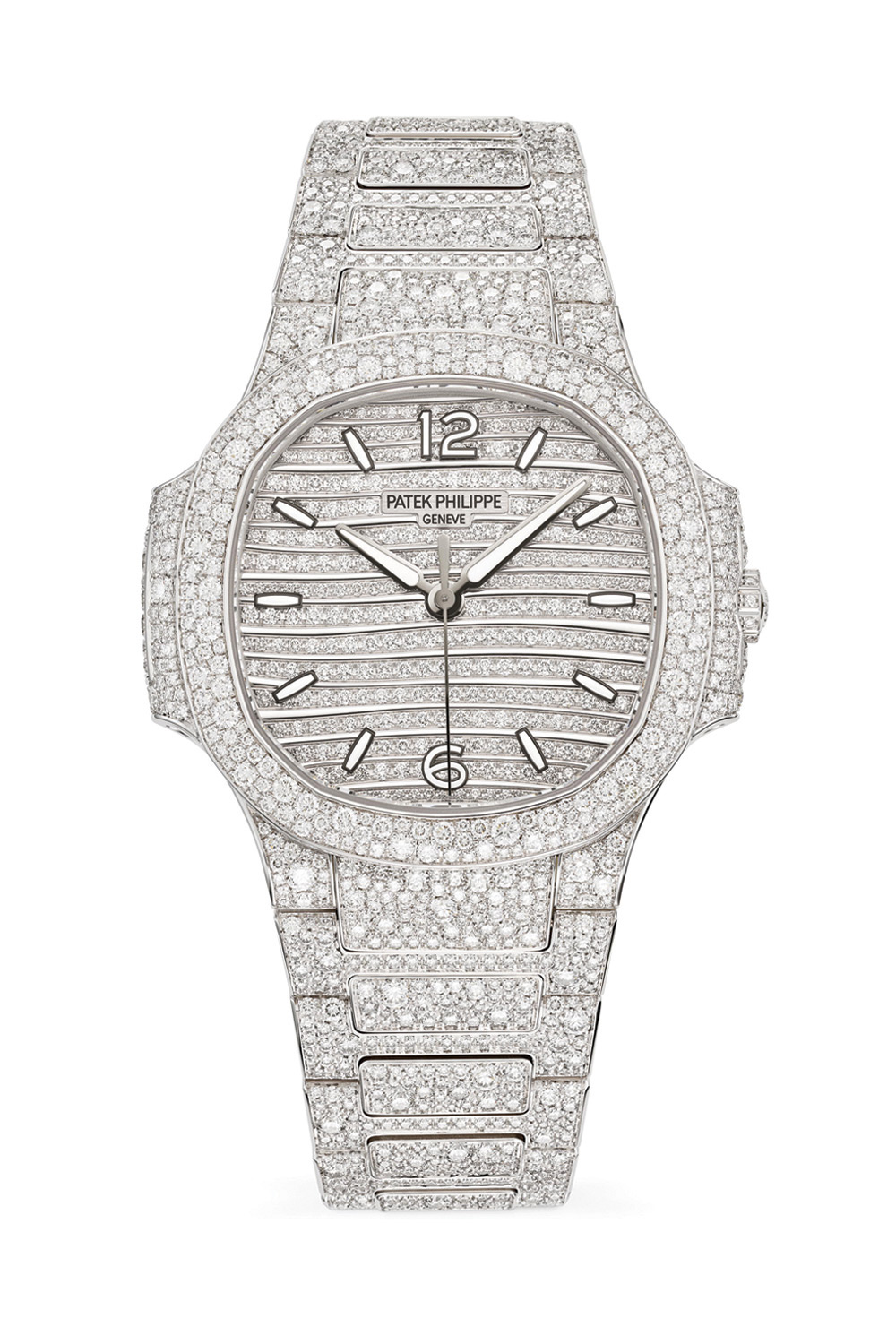 The downside of such a random pattern is that is can negatively impact a watch’s legibility, something Patek want to avoid at all costs. Therefore, they have made sure the white gold hour markers and Arabic numerals have blackened borders and are luminescent, which they’ve also done with the hands. 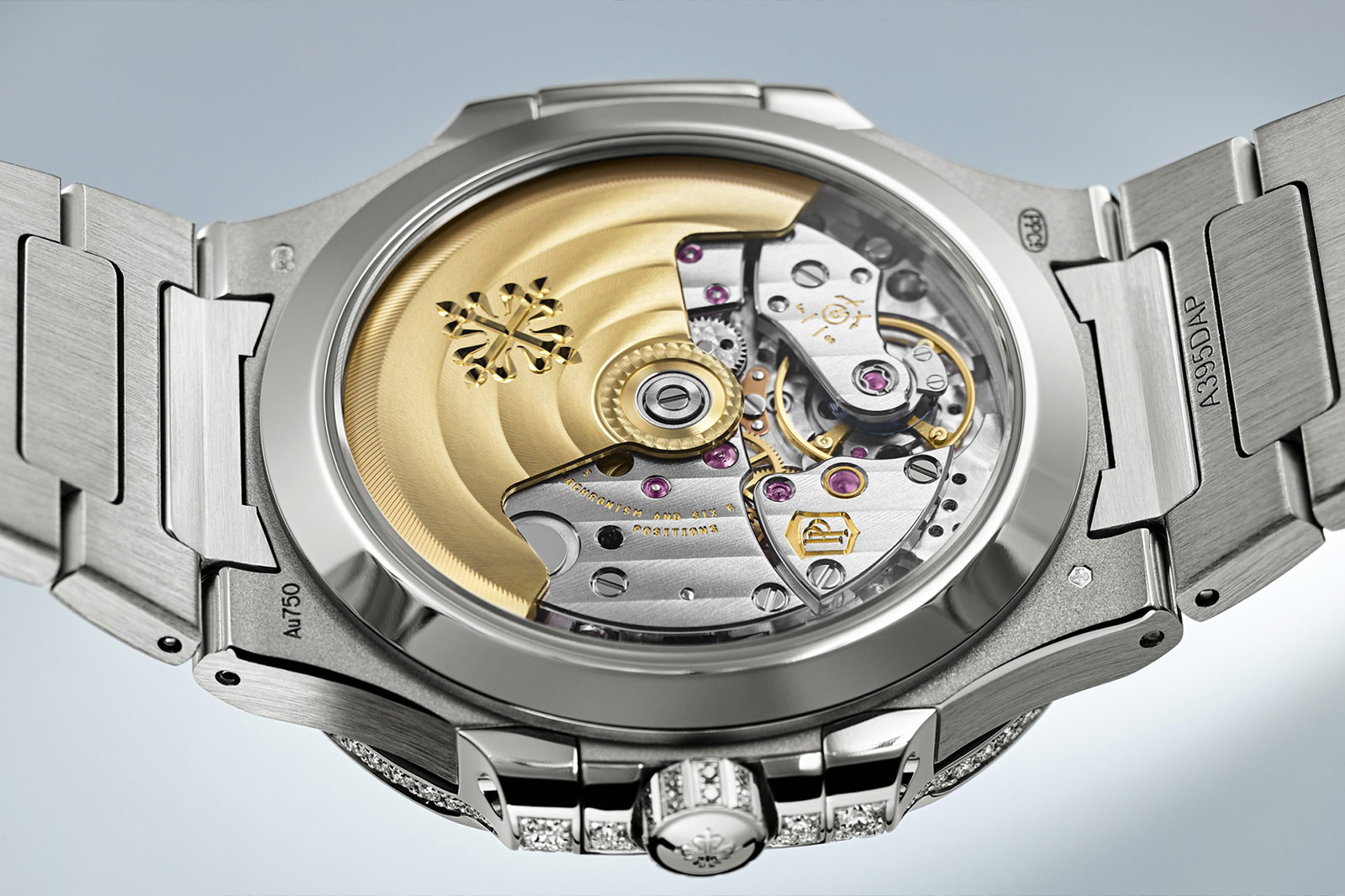 Under what feels like the entire world’s supply of diamonds, there’s the Calibre 324 S automatic movement with sweep seconds with a power reserve of 45 hours, a staple of the range. Which is great because after spending £282,340 you’ll want to be confident that it will at least tell the time accurately.