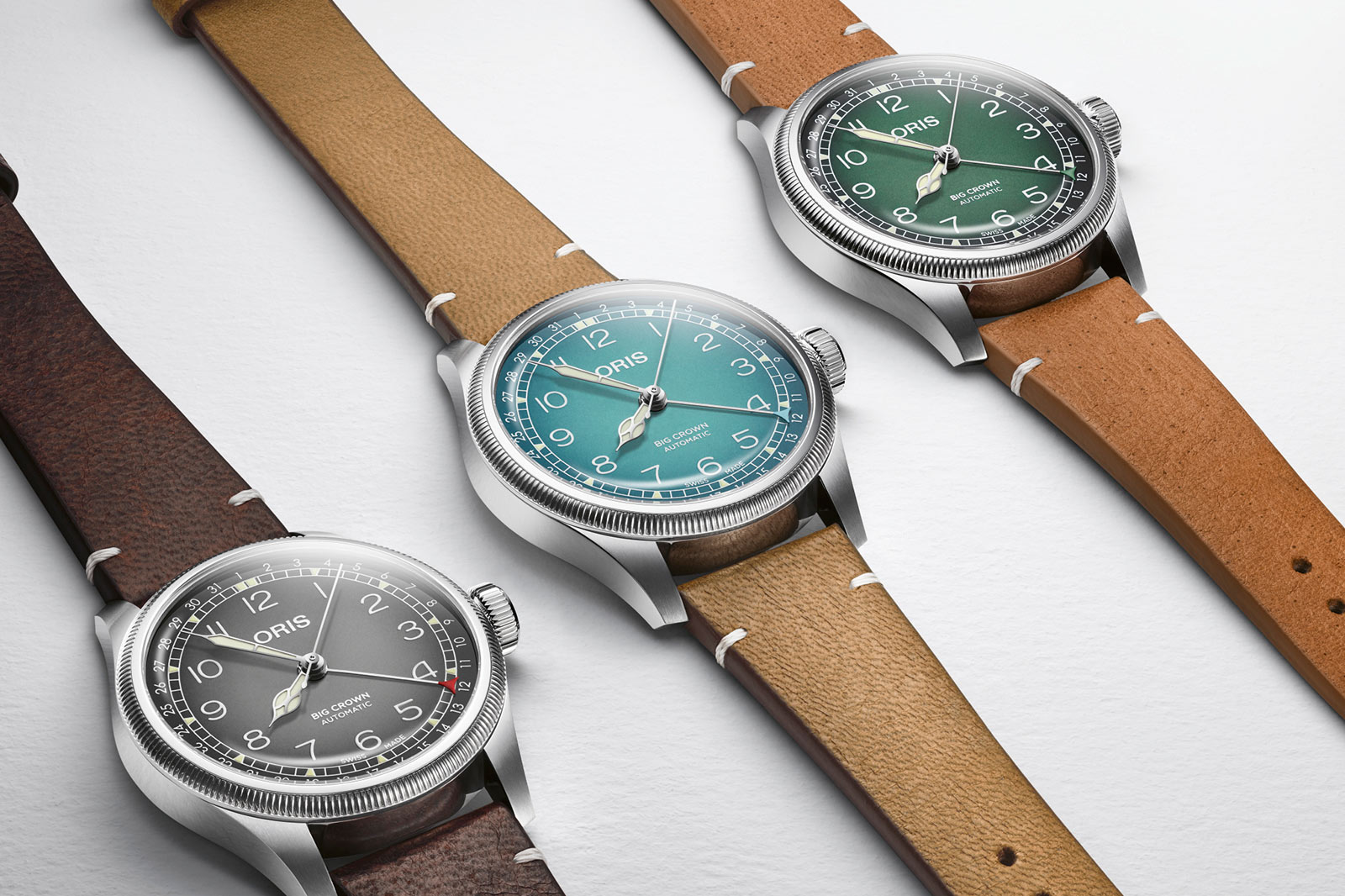 Sustainable watchmaking is a big deal, and you can check out some of the latest trends and 10 of the best sustainably made luxury watches here. One of the watchmakers who appears in that article is Oris, who have rapidly become the most vocal manufacture when it comes to supporting great causes and finding new ways to make watches in environmentally beneficial ways. They’ve been doing it for a while now with watches like the Aquis Date Upcycle and the Whale Shark. And with their latest timepiece, the Oris Big Crown X Cervo Volante, they’re tackling a new issue, sustainable leather straps.

The watch itself is a pretty standard take on the classic Oris Big Crown Pointer Date. There are three colours available with alpine inspired dials in grey, light blue or forest green. Each of them is a great option although that minty turquoise/blue is particularly lovely. The case is stainless steel and uses the fairly new 38mm sizing that started appearing more frequently last year in Pointer Dates like the Hölstein. 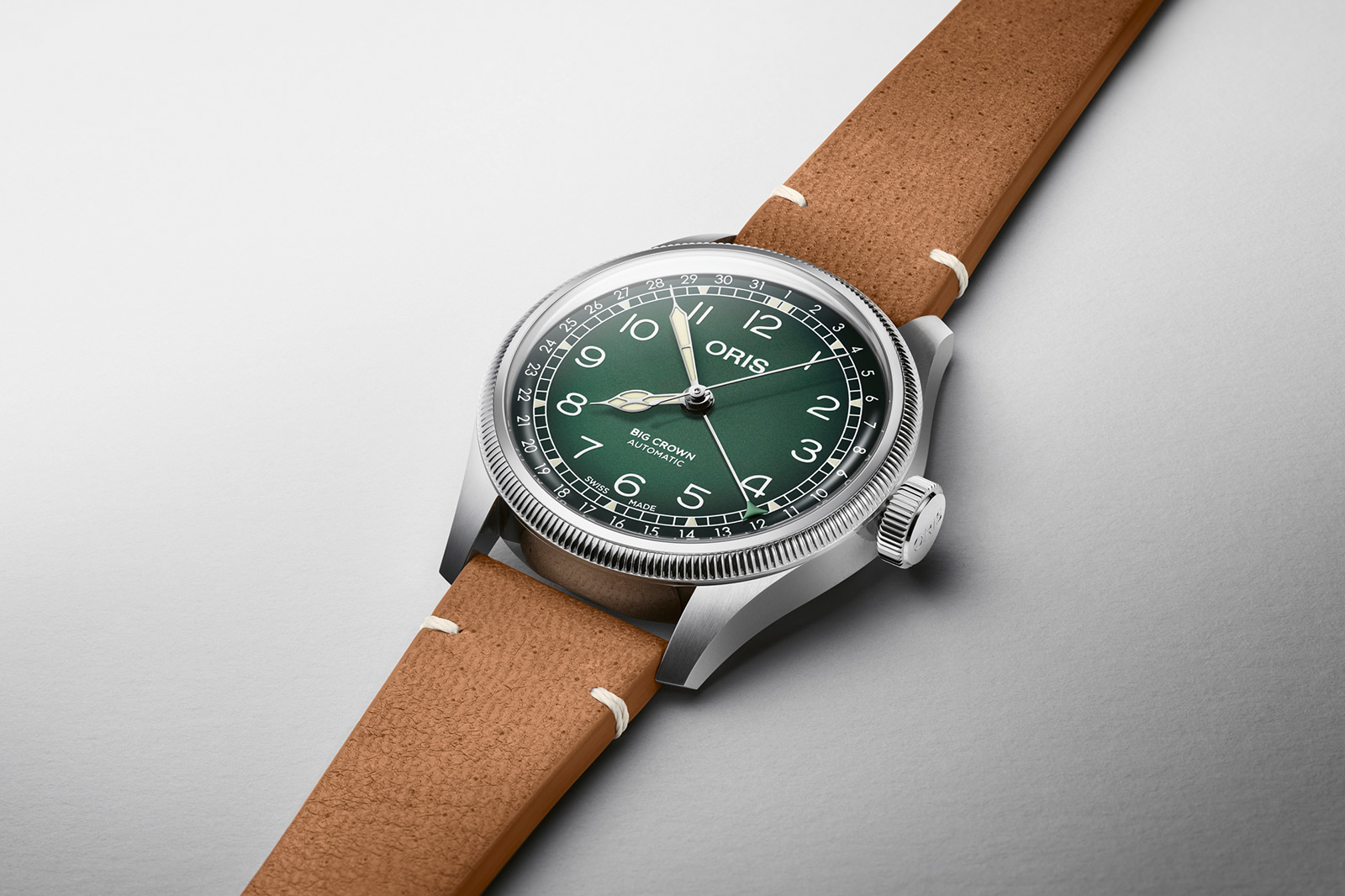 However, the primary element being addressed is the leather strap. A lot of people’s immediate reaction is that leather can never truly be a sustainable industry and if it’s done in the wrong way, that’s true. However, it’s important not to forget that animals are a natural resource. One that’s less damaging to the Earth than ripping out the oil or metal for bracelets or the arduous refinery process to create materials like silicone rubber. The critical thing is to create a leather supply line that doesn’t generate any waste or undervalue animal life, which are the most widely perceived issues currently. 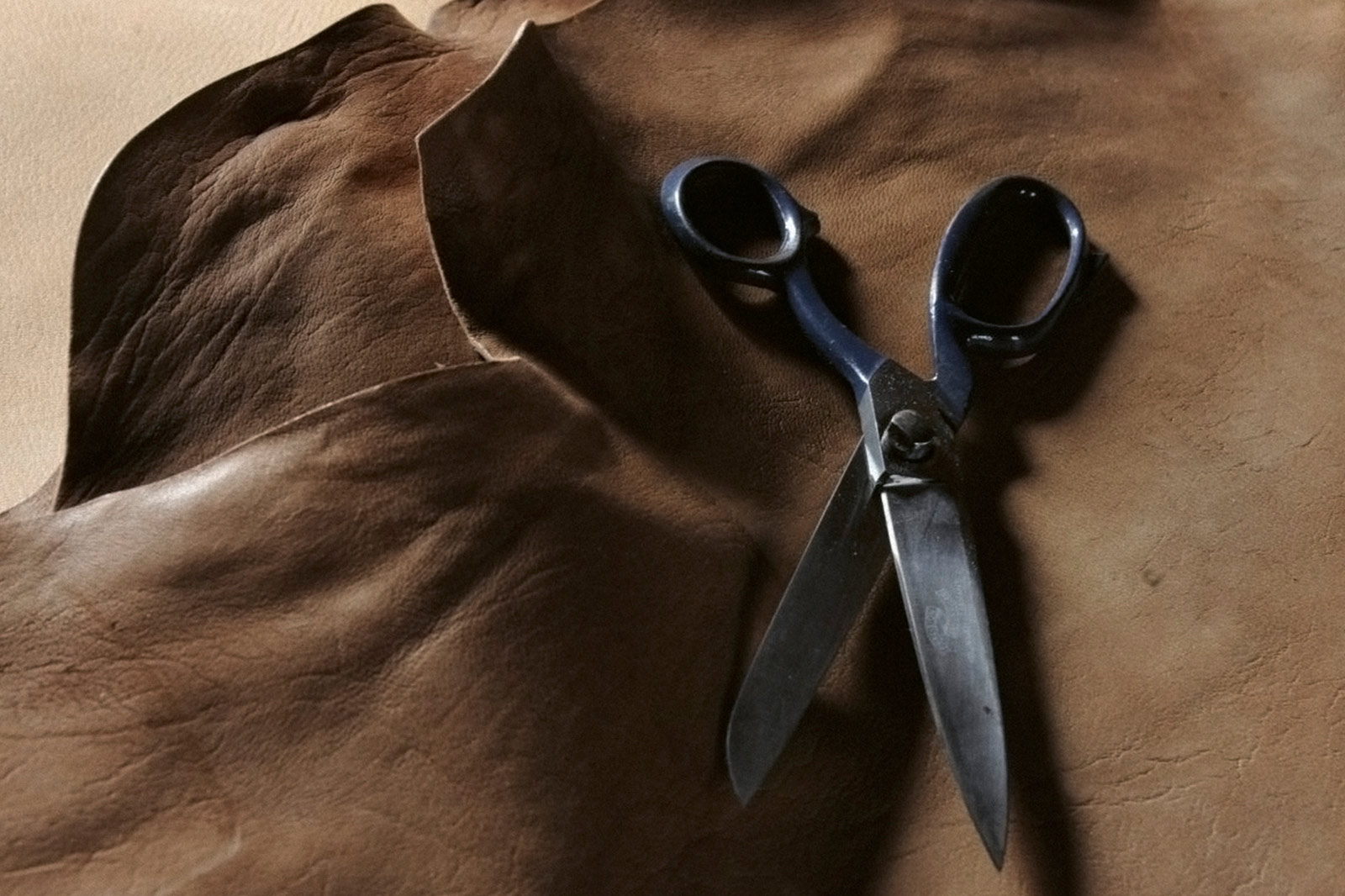 That’s where Cervo Volante enter the picture. They’re a Swiss leather producer, founded in 2017 by a biotech engineer and a wildlife and habitat management biologist, that specialise in sustainable deer leather. Every year around 15,000 wild red deer are culled in Switzerland to protect the environment and it the hides from those deer that Cervo Volante use to create shoes, accessories and now watch straps for Oris. 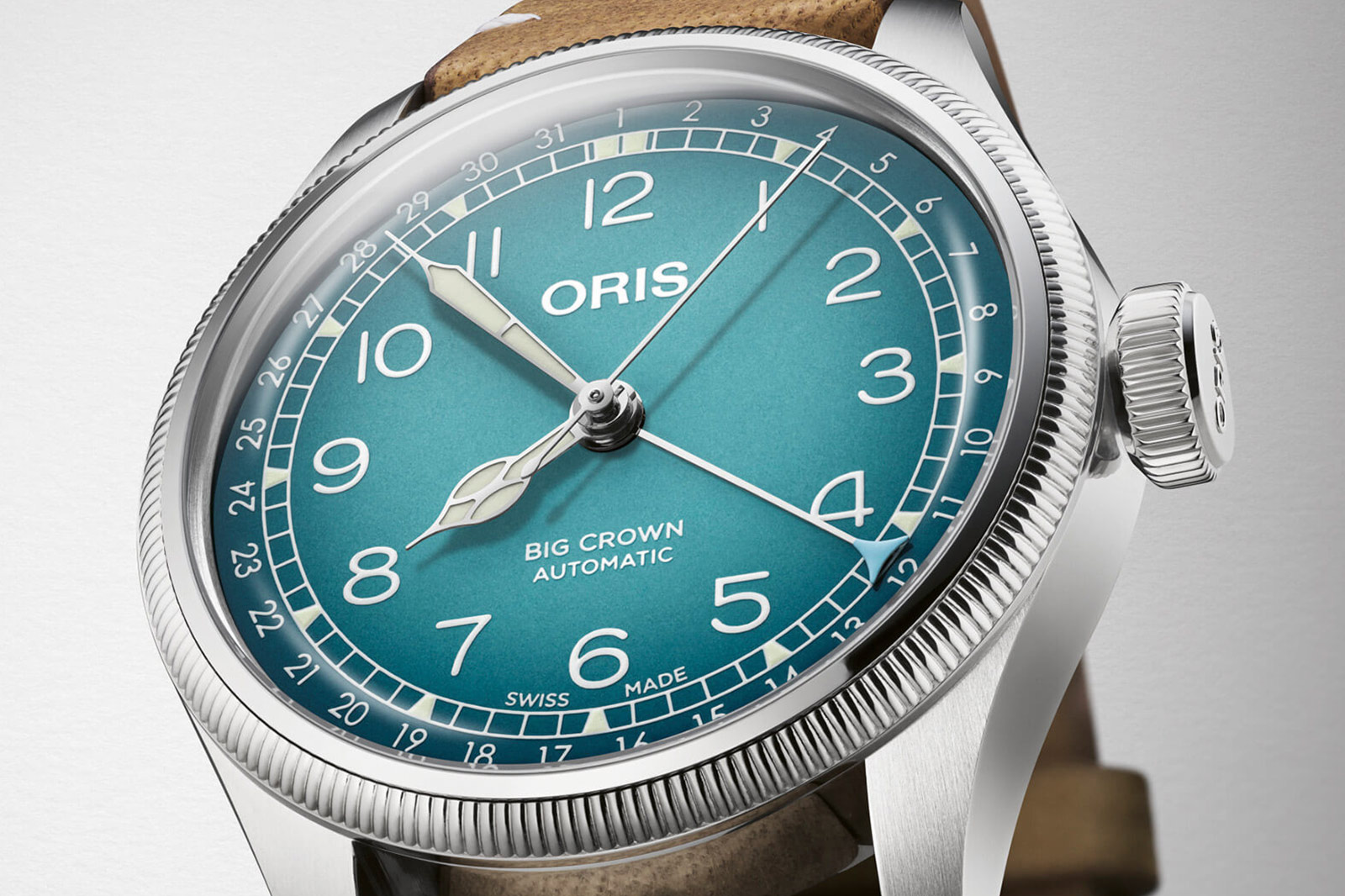 It’s not a widely known fact that deer overpopulation is a major issue (even in the UK) because there are so few natural predators around now to regulate their numbers and left unchecked they can ruin habitat. It’s one of the leading arguments as to why wolves should be reintroduced in many countries that once had them (including the UK). Hence the current necessity of culling. However, what isn’t necessary is the large amount of waste generated by culling, previously the hides were just burned. But thanks to Cervo Volante they now become useful and indeed beautiful sustainable products instead. 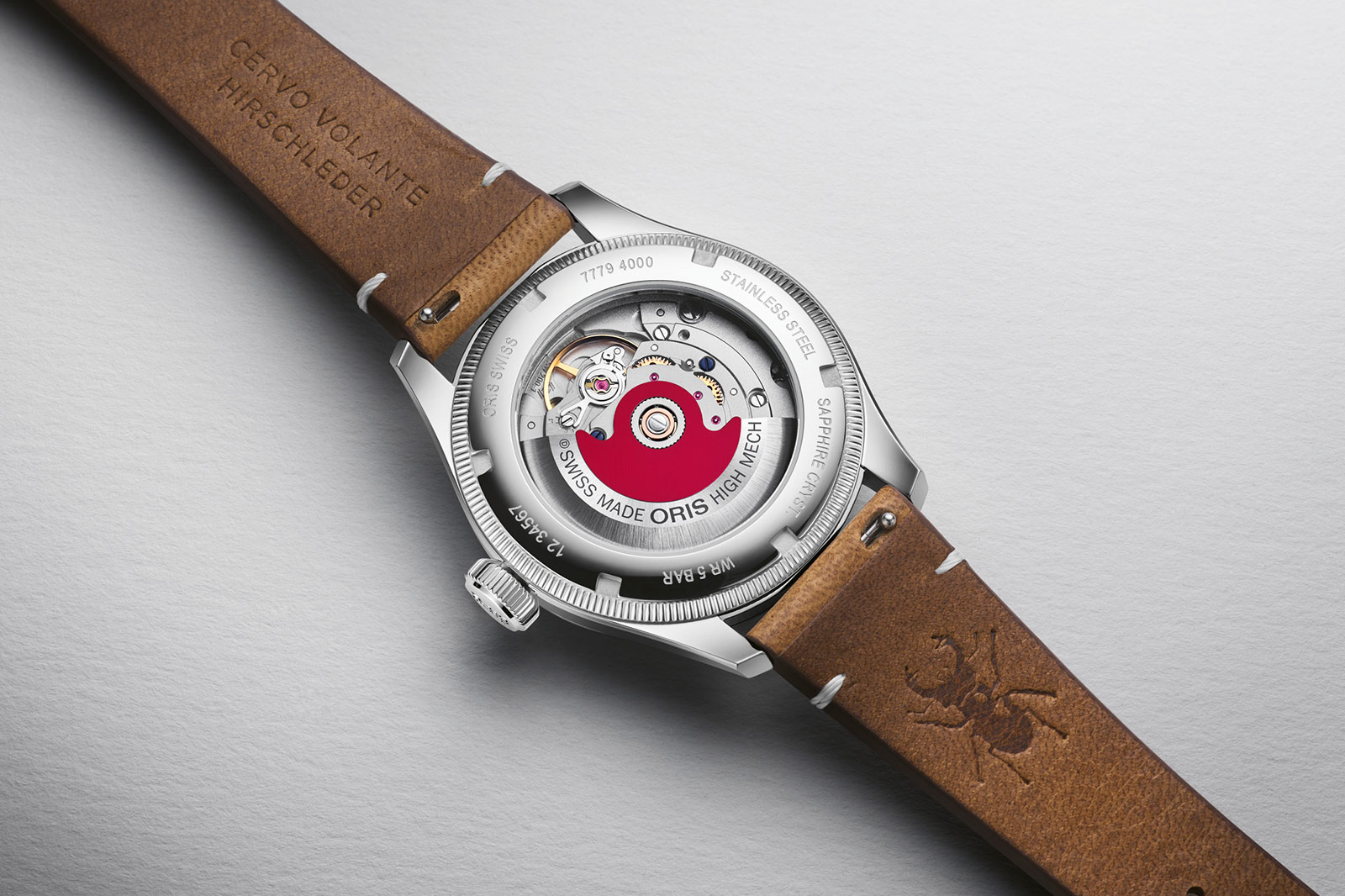 As for mechanics, housed inside is the calibre Oris 754, which is based on the Sellita SW200-1. It only has a 38-hour power reserve and has us asking why, yet again, Oris are reluctant to use the Calibre 400 in new watches? They’ve shown that Big Crown Pointer Date can house it in the 403. But, then again, it is rare for watchmakers to use their top tier calibre in every watch and it greatly impacts accessibility, the 403 costs almost twice as much as the Big Crown X Cervo Volante, which is priced at £1,350. The Oris 754 is an adequate alternative.

An important thing to note is that unlike many collaborations, this is not a limited edition and marks the start of many watches to come from Oris with Cervo Volante straps.