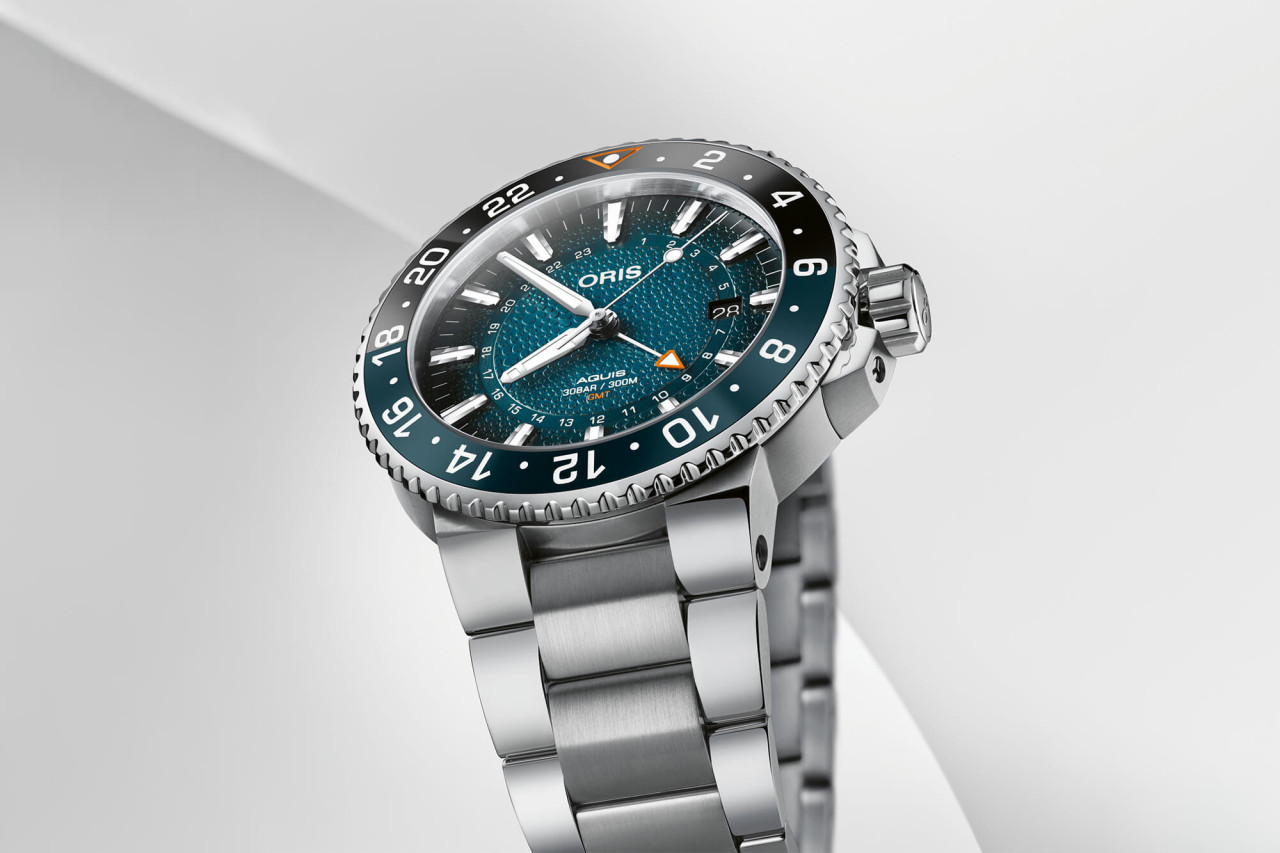 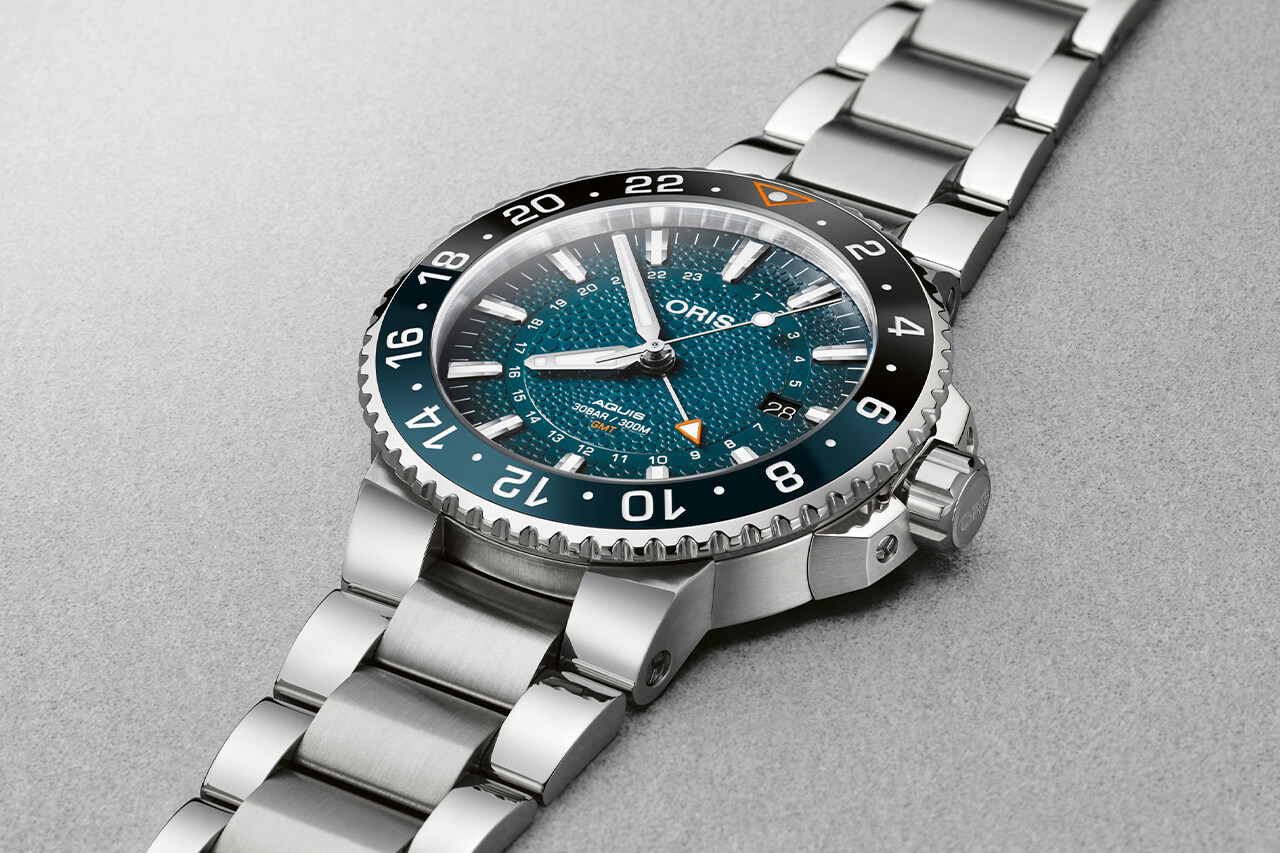 Anyone who has been paying attention to Oris for any amount of time knows they sometimes have bigger fish to fry than simply making just another watch – that may have been a poor choice of words given the circumstances. Their ‘Change for the Better’ mission aims to combat climate change and raise awareness for critical issues around the world: their latest release, the Whale Shark Limited Edition, is designed to aid the conservation of Earth’s biggest fish.

Saving endangered animals is a noble goal and we’ll discuss Oris’ efforts in more detail later. First, let’s talk about the time piece that bears the whale shark’s name. It’s based on the Aquis GMT Diver and the resemblance is easy to see. What makes the Whale Shark version stand out is its new dial and caseback. 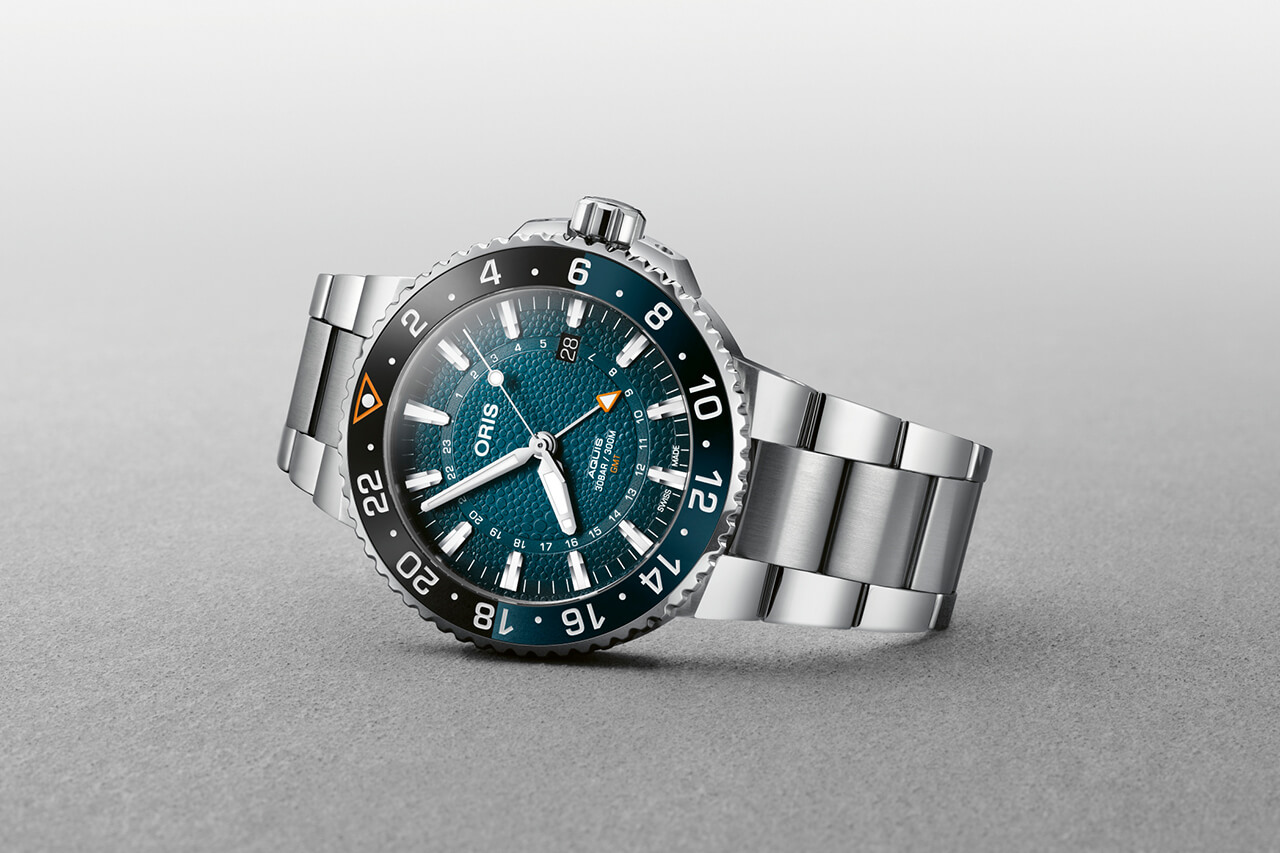 The Whale Shark has an engraved dial with a unique pattern presented in oceanic blue, it replicates the texture of the fish’s body and has an almost alien-like quality that reinforces how little we know about the world below the waves. It manages to capture the essence of sub-aquatic life incredibly well. As I mentioned previously, the bezel is the same as the original Aquis although the Whale Shark has a nice day-night colouring in blue and black, evoking the phenomenon of sunlight penetrating the depths. 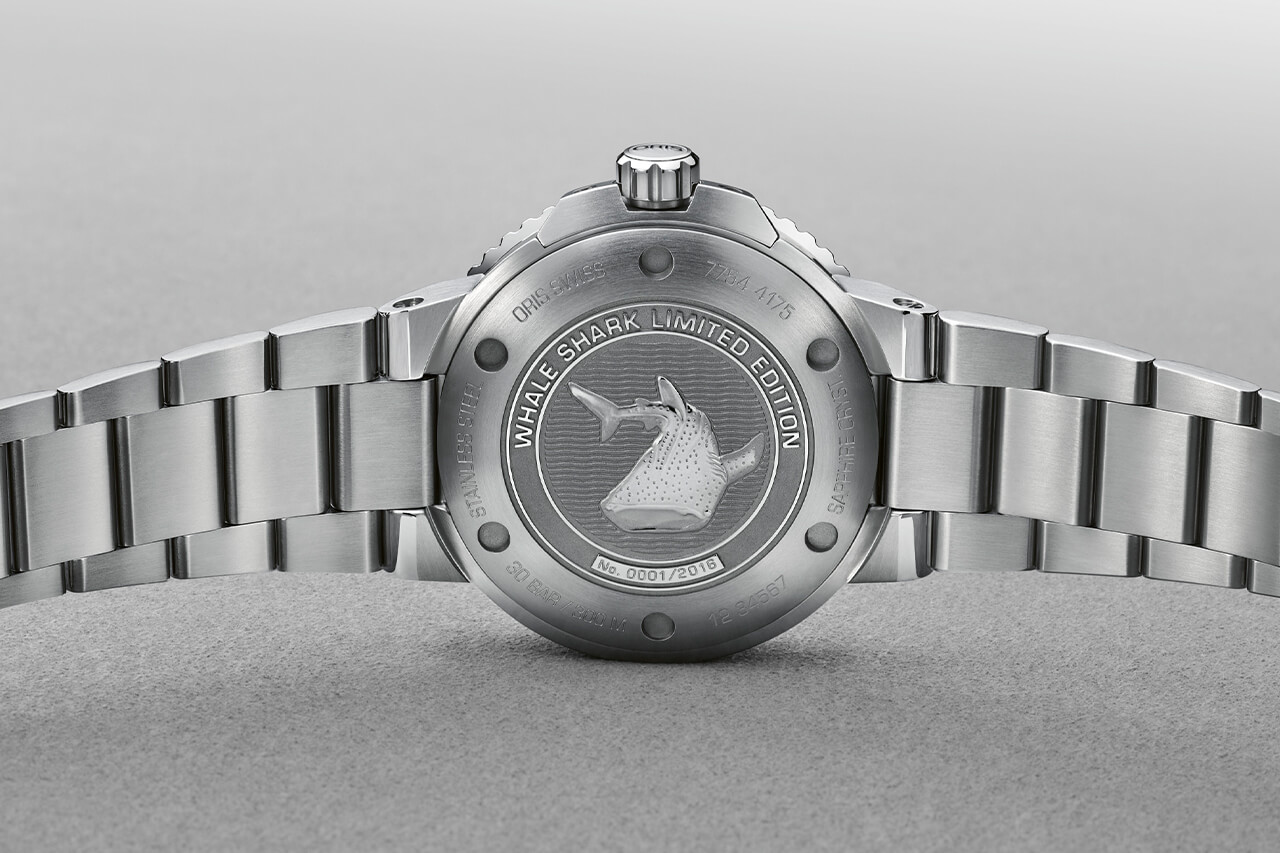 Appropriately, the Whale Shark Limited Edition has some solid diving capabilities, powered by the Oris 798 with 42-hour power reserve. It’s protected to 30 bar (300m water resistance) thanks to the screw-down crown, 43.5mm diameter stainless steel case and domed sapphire crystal. That case size does mean that this is a big watch but it’s still nowhere near the size of the 40-foot fish that’s engraved on the caseback.

Aesthetics aside, the outstanding feature of the Whale Shark is the message and story it represents. The whale shark is one of the most beautiful creatures in the ocean, their speckled skin gives them an almost magical quality as they fade into the dark sea around them. Despite being called a shark, they’re not actually violent, using their giant sieve-like mouths to filter tiny bits of food out of the water, providing an important service for our oceans. 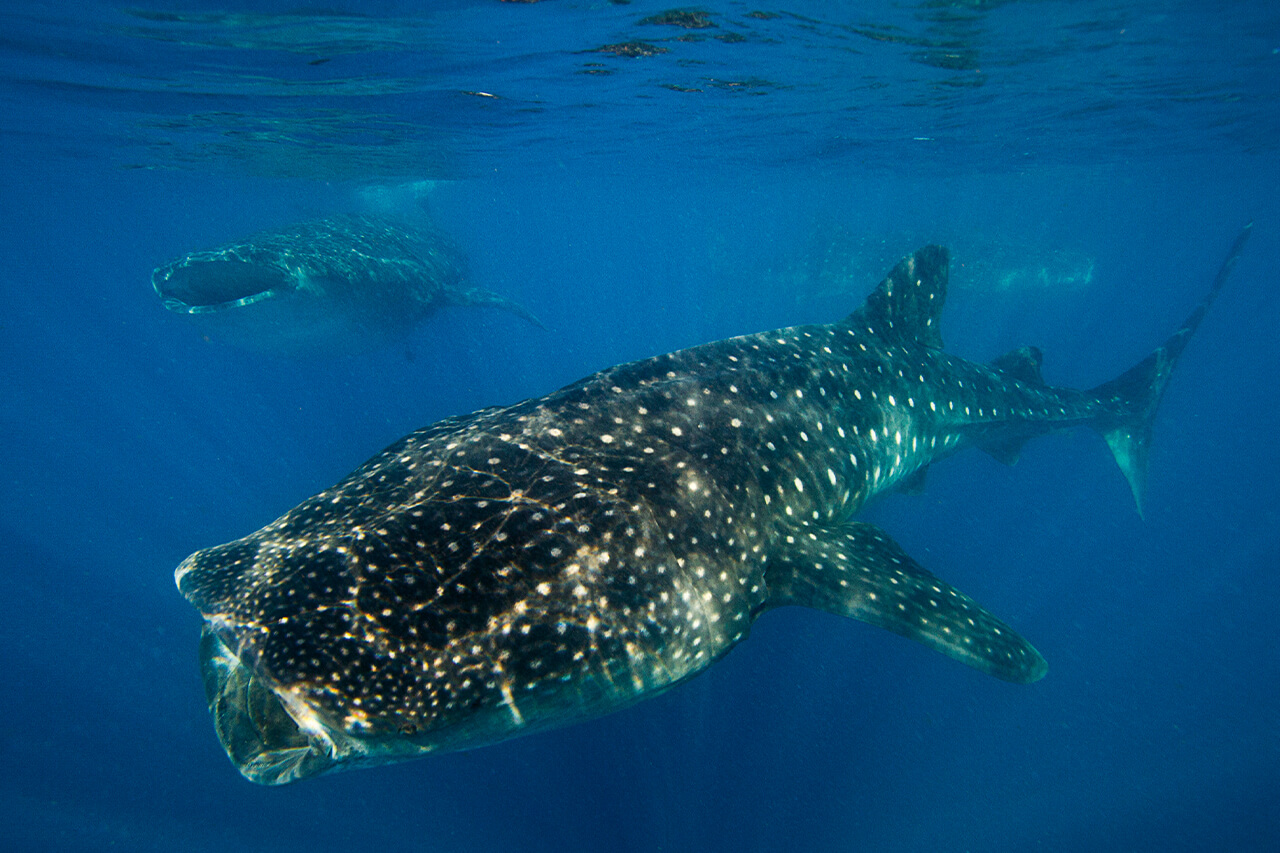 They are also on the endangered list because like most sharks they’re hunted for their fins and oil, which are used in traditional foods and medicines. Oris’ brand ambassador Gerardo del Villar has been tracking and photographing the creatures for over 15 years and has seen first-hand the threats they face. He believes that the best way to help conserve the animal is to educate people about the vital role they play in the ocean ecosystem, hence his collaboration with Oris to help spread the word. 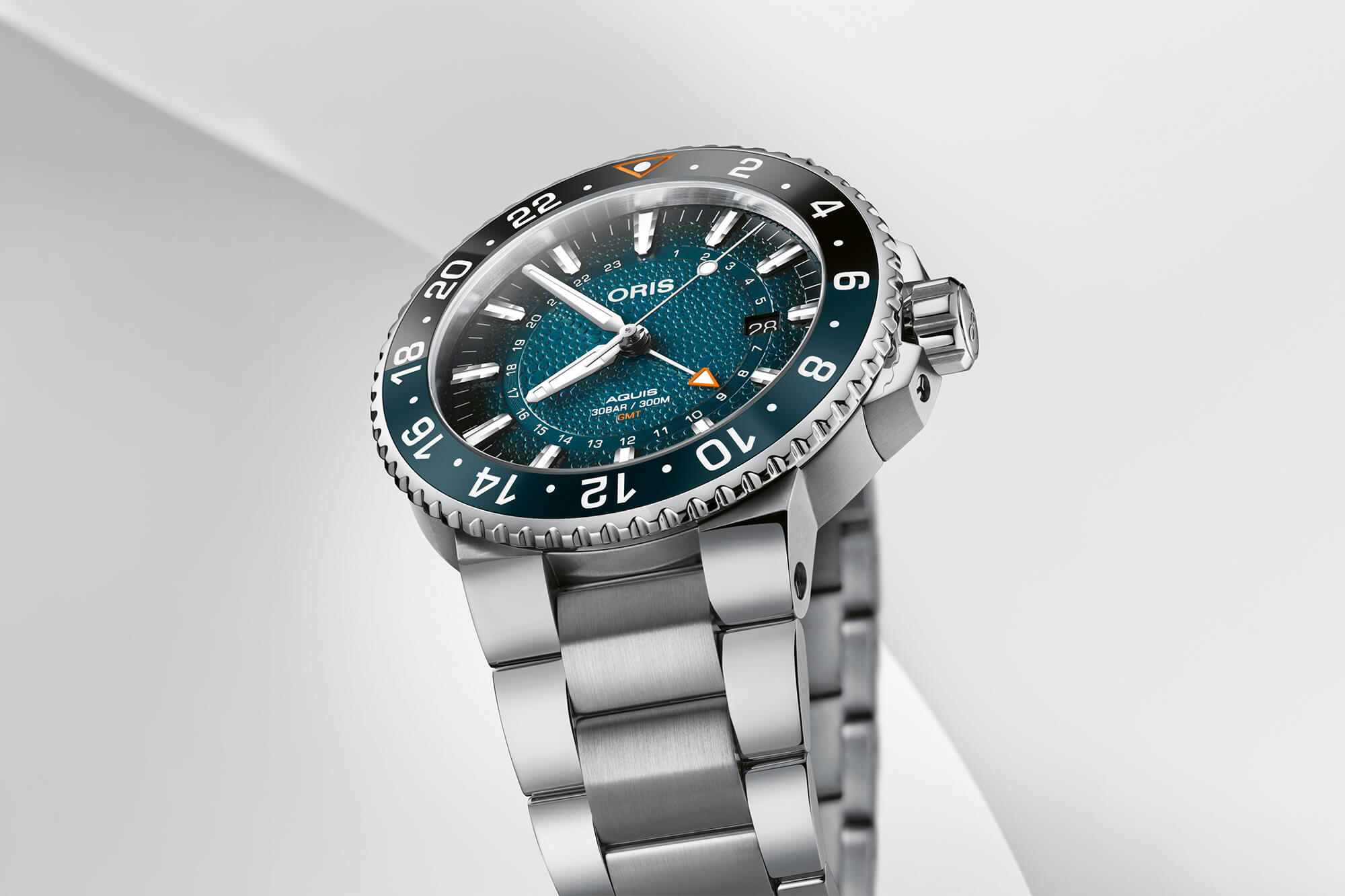 This watch is limited to 2016 pieces, which might seem like a lot for a limited run but it actually has hidden meaning. 2016 was the year that the International Union for Conservation of Nature (IUCN) made a landmark speech regarding the welfare of whale sharks, a moment in history Oris wants to commemorate.

They also want their message to be spread as far as possible so making this watch overly exclusive just doesn’t make sense, a fact that is also seen in the accessible price of £2,250.