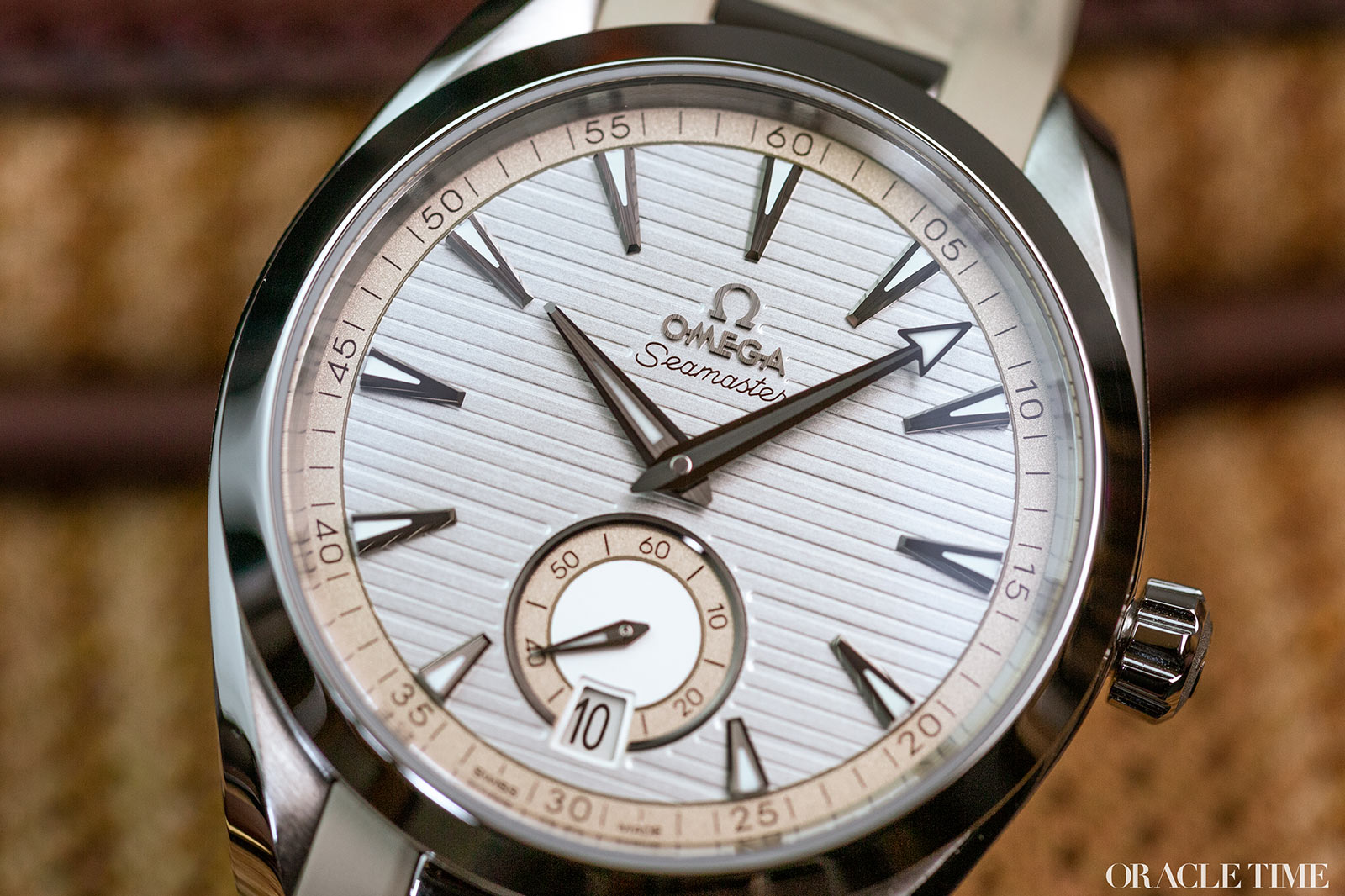 The Aqua Terra is a tricky watch to define, it has both ‘water’ and ‘land’ in its name, so it’s tempting to call it a dive watch but it patently isn’t and it’s also not quite a dress watch. It’s a fusion of both, turning it into something different entirely, something with a unique style. And now Omega have added a small seconds subdial for an additional burst of refinement.

Picking up the press prototype and looking at the case, which is the same as its predecessor’s, it’s a nice looking nautically themed piece. The 41mm stainless steel has a sleek look rather than rugged and there’s no rotating bezel and no dive timer, but then it isn’t a thoroughbred diver so you wouldn’t expect it to. The 150m water resistance is testament to that, yet it’s still perfectly adequate if you happen to take a spill off the side of a boat. 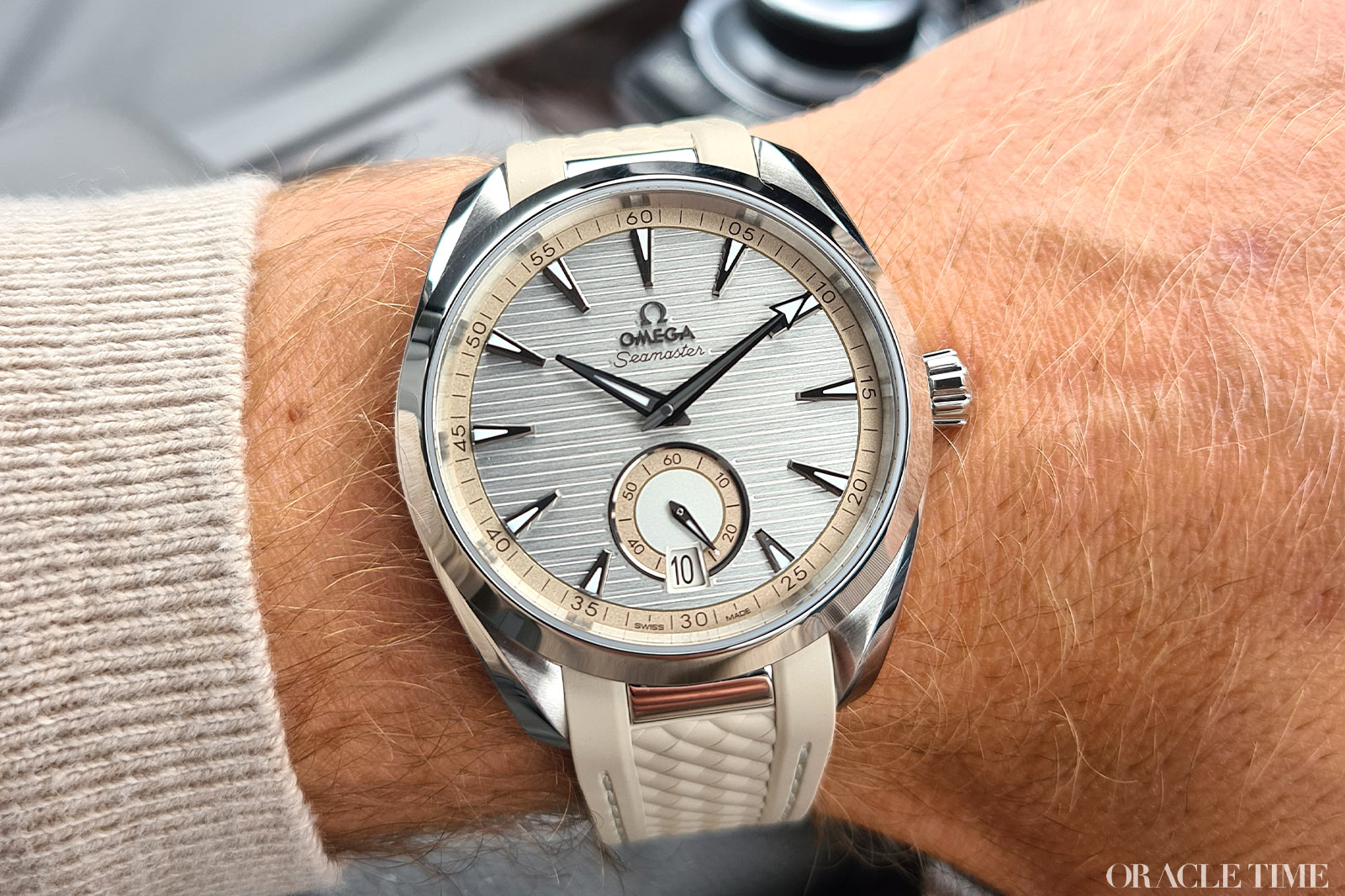 And boats are where this watch really comes into its own. The horizontally embossed (teak), silver dial reminds me of the planks of a ship and that nautical aesthetic is further emphasised by its cream colour scheme. If I had to categorise it, I’d call it a deck watch – ideal for skimming along on the top of waves in a luxury yacht enjoying a glass of fizz, or whatever it is that people do on luxury yachts. 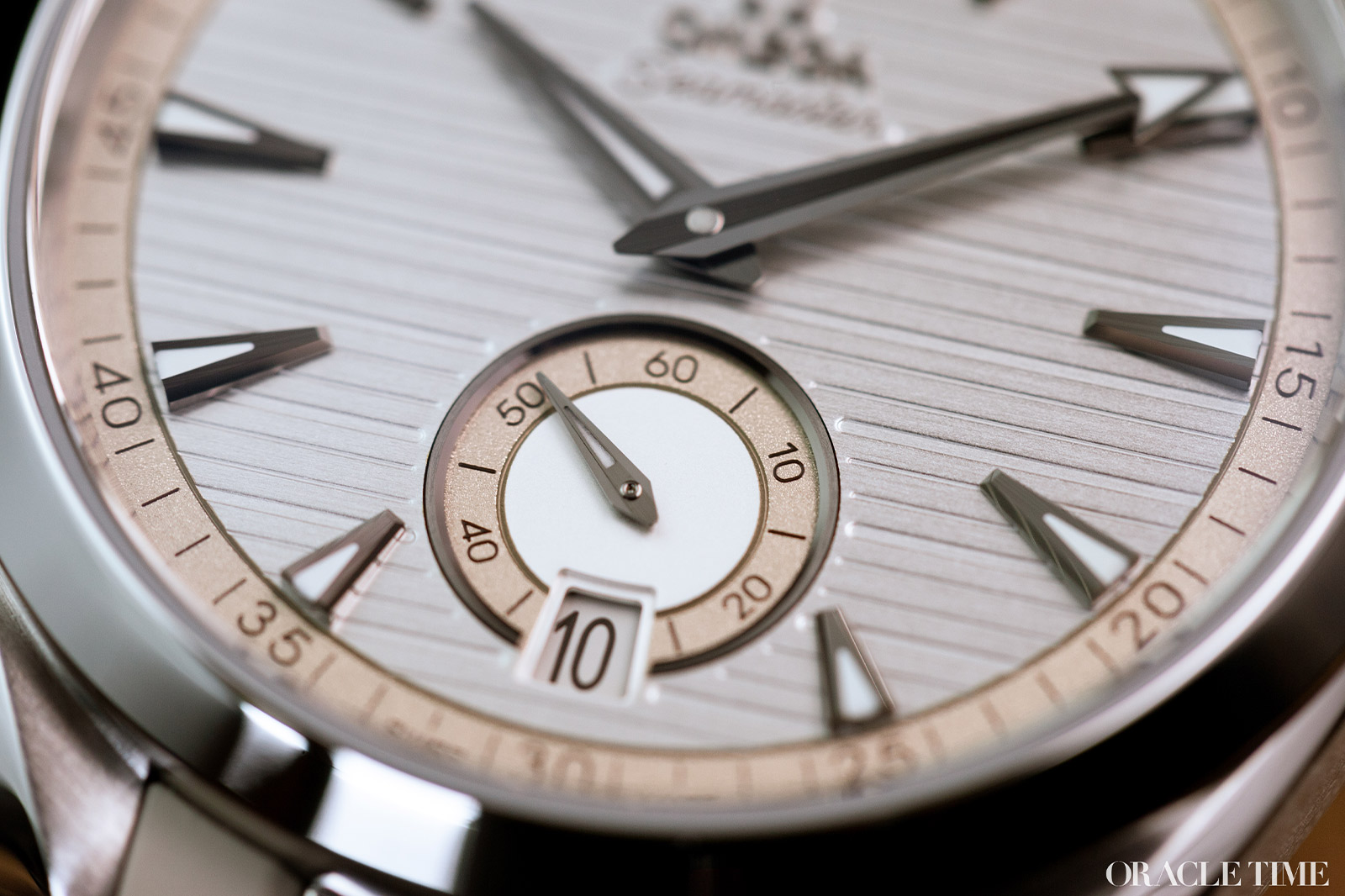 Of course, most of that is true of the standard Aqua Terra as well and what makes this version special is the addition of small seconds. The subdial occupies the lower third of the face, intersecting with the date aperture at 6 o’clock, with the seconds scale given a sandblasting finish to contrast with the dial. Classic divers typically feature as few complications as possible, to maximise legibility, so the inclusion of one here emphasises the fusion of styles – I think it’s quite attractive. 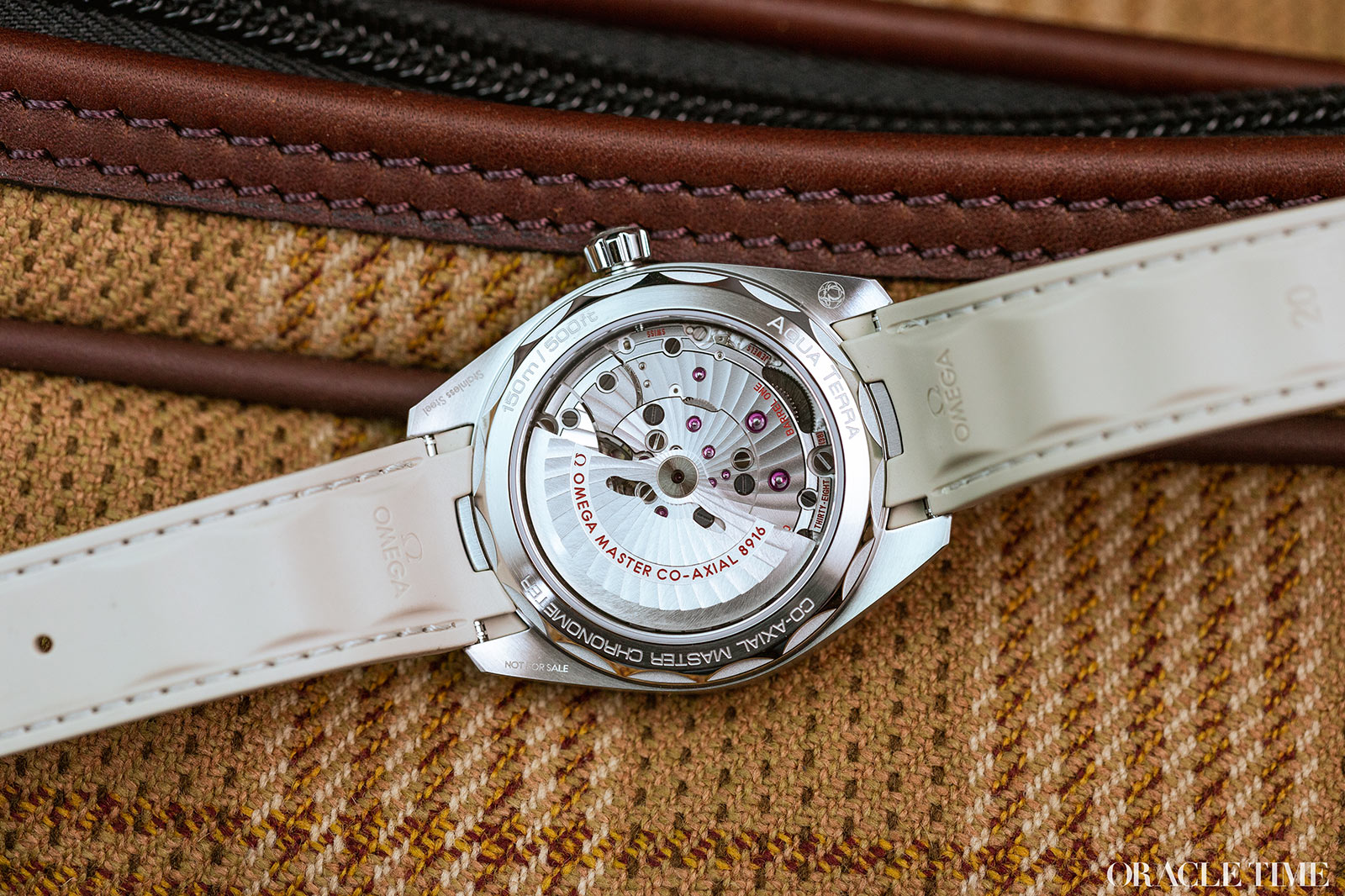 Introducing a new function to the range means a new calibre and Omega have given the Seamaster Aqua Terra Small Seconds their latest automatic co-axial master chronometer calibre, the 8916. Approved by METAS to the highest level, it not only has a 60-hour power reserve but also a magnetic resistance up to 15,000 gauss. Also, as I played around, I discovered that it’s capable of jumping the hour hand forward and backward, perfect for the globetrotter who needs to adjust their watch frequently and easily.

My last comment would be on the strap. The off-white, beigey rubber strap is cool and reinforces the boating aesthetic with its platted pattern. However, it has a combination buckle and deployment clasp, which I’m not the biggest fan of, they always feel slightly too over-engineered. Individually both are fine, why put them together? But in the grand scheme of things that’s a minor point. 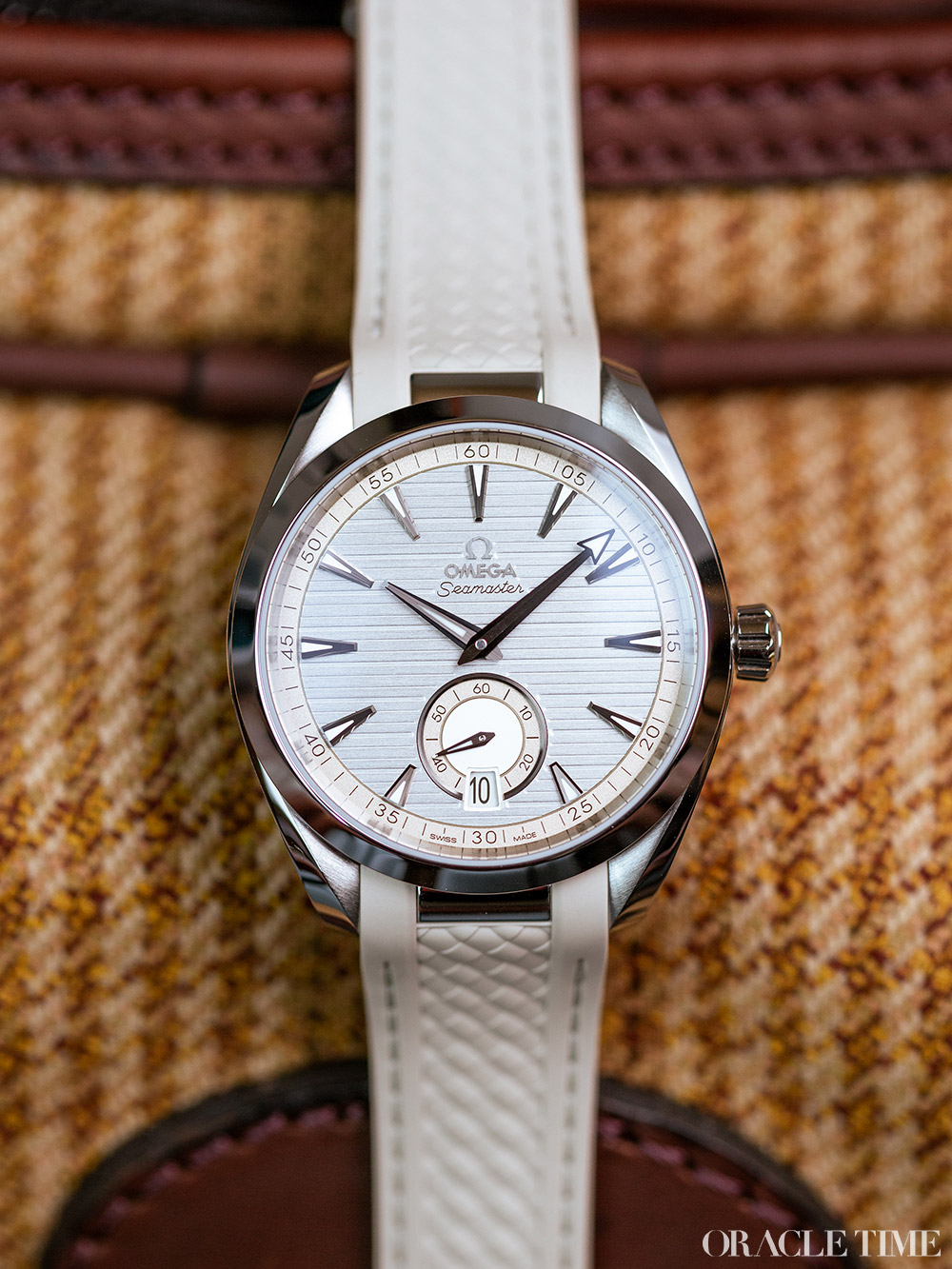 The Aqua Terra is by its nature a slightly strange watch because there are very few situations where I wouldn’t prefer to have a Seamaster Diver 300m or the heritage 300. But that doesn’t mean it isn’t a solid watch in its own right and in the right, niche circumstance (i.e. on a yacht) I can see the appeal of the dress-diving fusion. If it were more accessible than its counterparts then it would be tough to say no, but the £5,190 price tag puts it at a similar threshold. Overall, I certainly wouldn’t blink twice if you told me it was at the top of your what to buy next list.