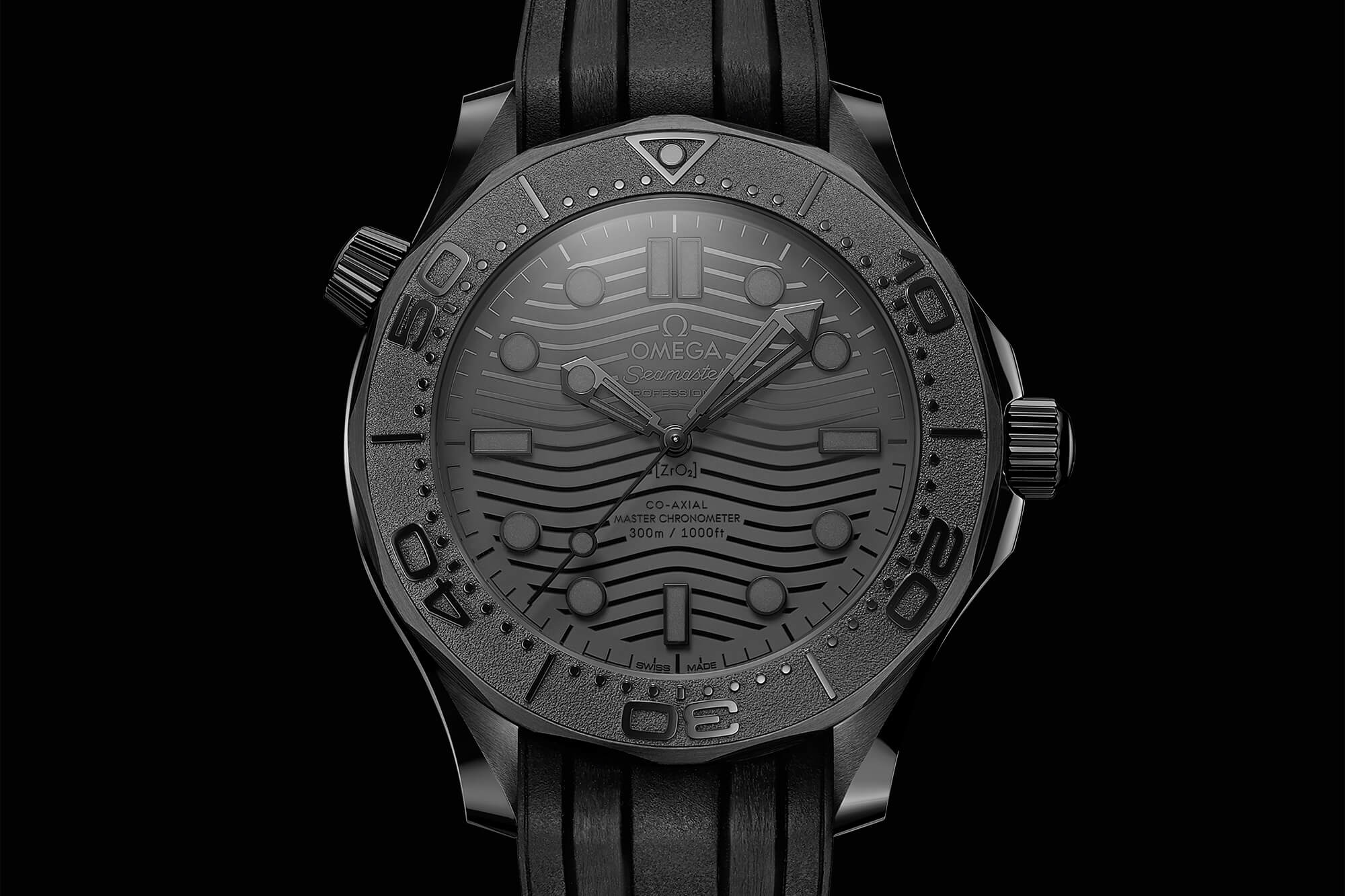 The Omega Seamaster Diver 300m Black Black is a stealthy addition to the Diver 300m range, in the same vein of watches as the Christopher Ward C60 Abyss. And a stealth version makes sense, this is the brand that makes James Bond’s watches – although the Bond editions can’t help but show off with a little flair and a flash of colour. With their latest release, Omega have introduced a true stealth piece that you’ll never see coming.

Immediately this watch has a more menacing attitude than the other timepieces in the collection. If the others are 007 with his martinis and poker, this is a Navy Seal on black ops, assassinating the leader of a small country on their yacht. ‘Black ops’ being the operative phrase as this timepiece is a blacked-out version of the Diver 300m that’s black on black… on black on black. 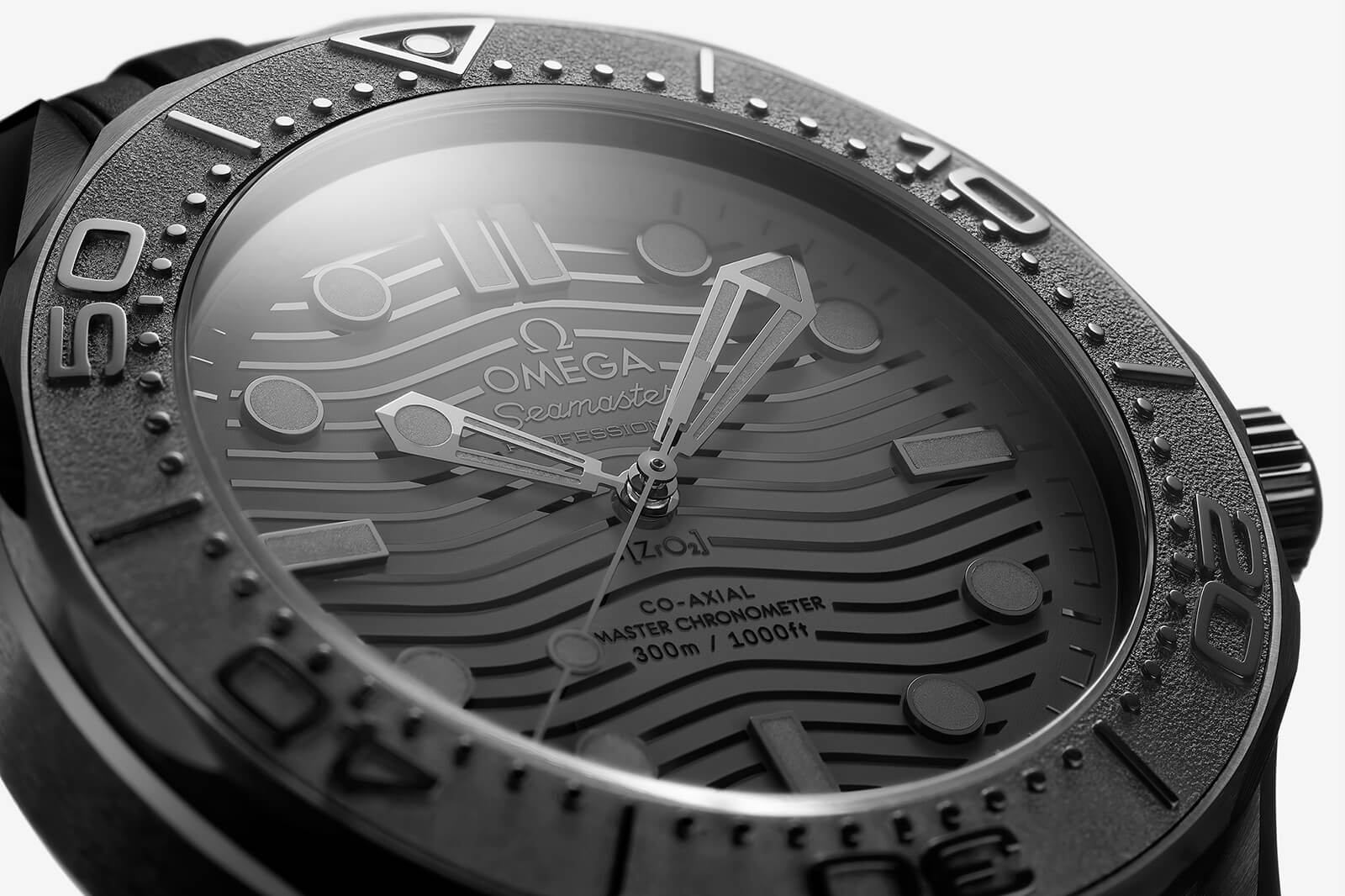 It has to be said that, at first glance, it appears to fail in one of the critical tenets of a diving watch: legibility. That is of course, until the lume kicks in. They’ve used a new anthracite superluminova on the skeletonised hands, black PVD indices and dive scale. The dark grey anthracite maintains the watch’s aesthetic in light conditions but glows with multiple distinct colours in darkness, allowing the essential markers to stand out. That’s a tick for design and a tick for practicality. Most likely it will struggle for legibility in comparison with other dive watches but it should be adequate enough when taken in isolation. 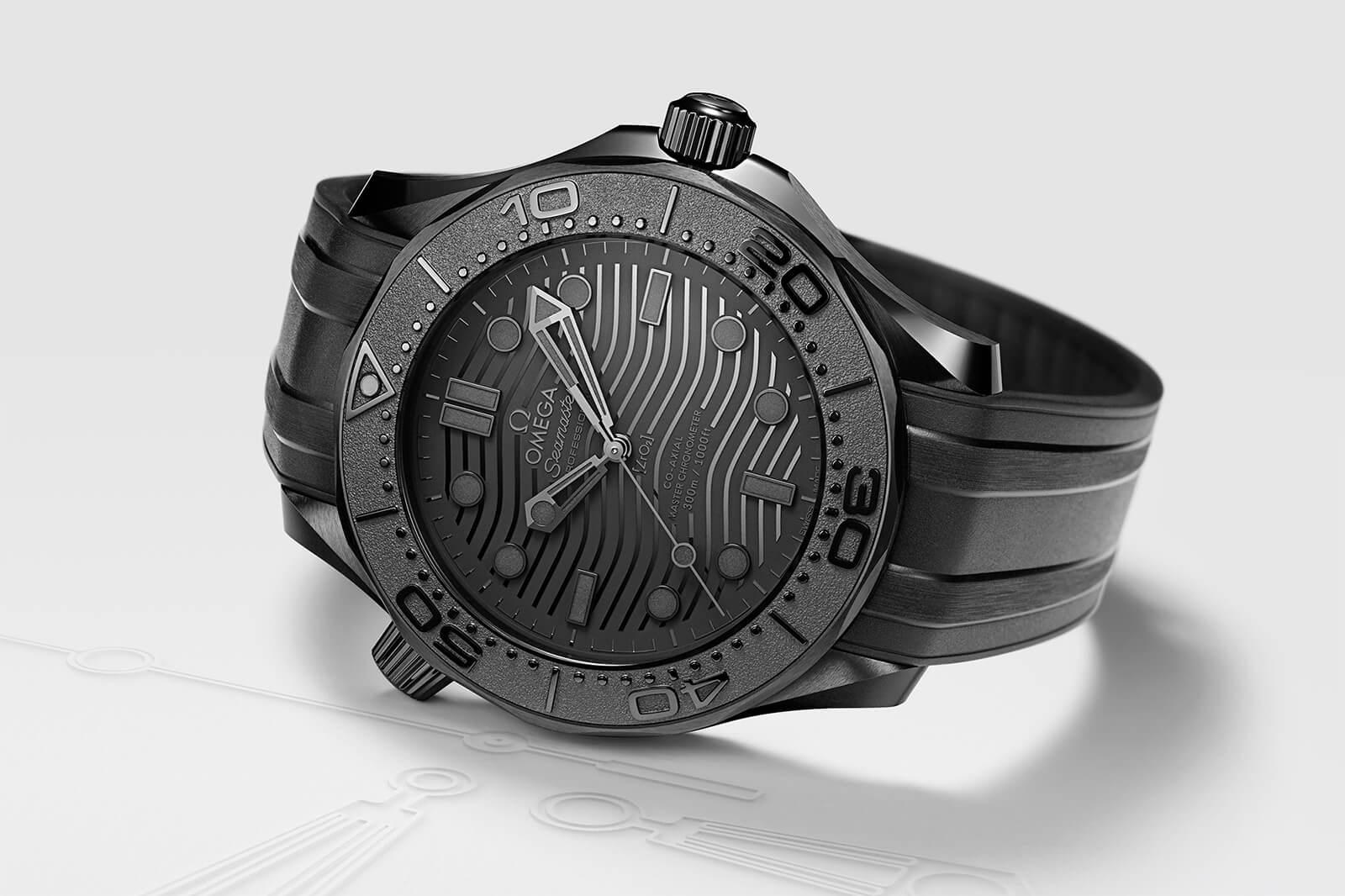 With that concern out of the way, let’s jump into the design. The Seamaster 300m Black Black is crafted from black ceramic with the case measuring 43.5mm in diameter, which is pretty average for a diver. Ceramic is also used for the bezel and the dial, where four different finishes have been used to create contrasting shades of black for added readability. 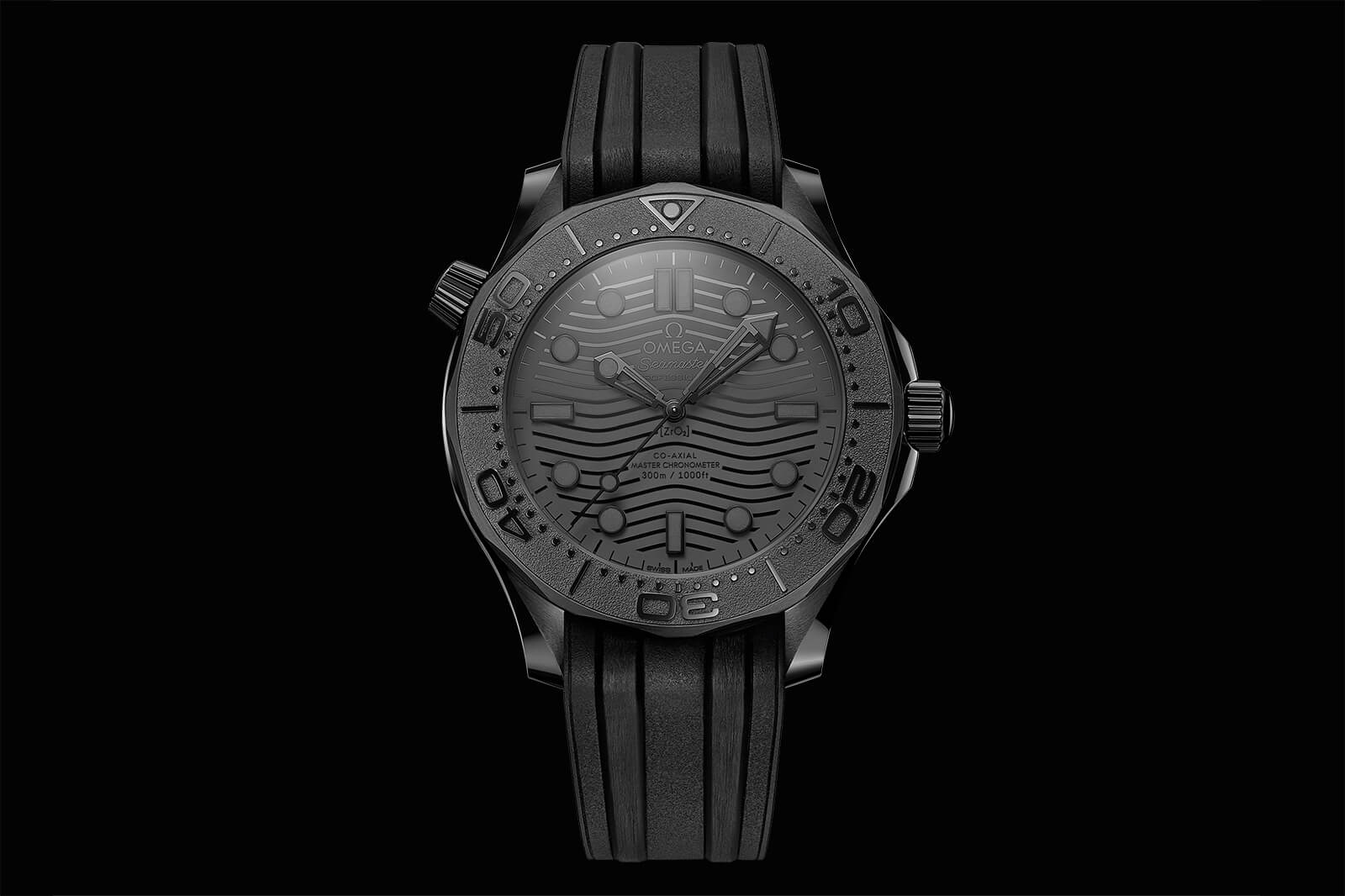 The most interesting technique Omega have used for the finishing is laser-ablation, which creates a positive relief of the wave design, minute track and script on the dial. It gives an almost sculptural look to everything as it uses a laser to mill the patterns from a single piece of material. It’s the first time Omega has used this technique extensively on a single watch. 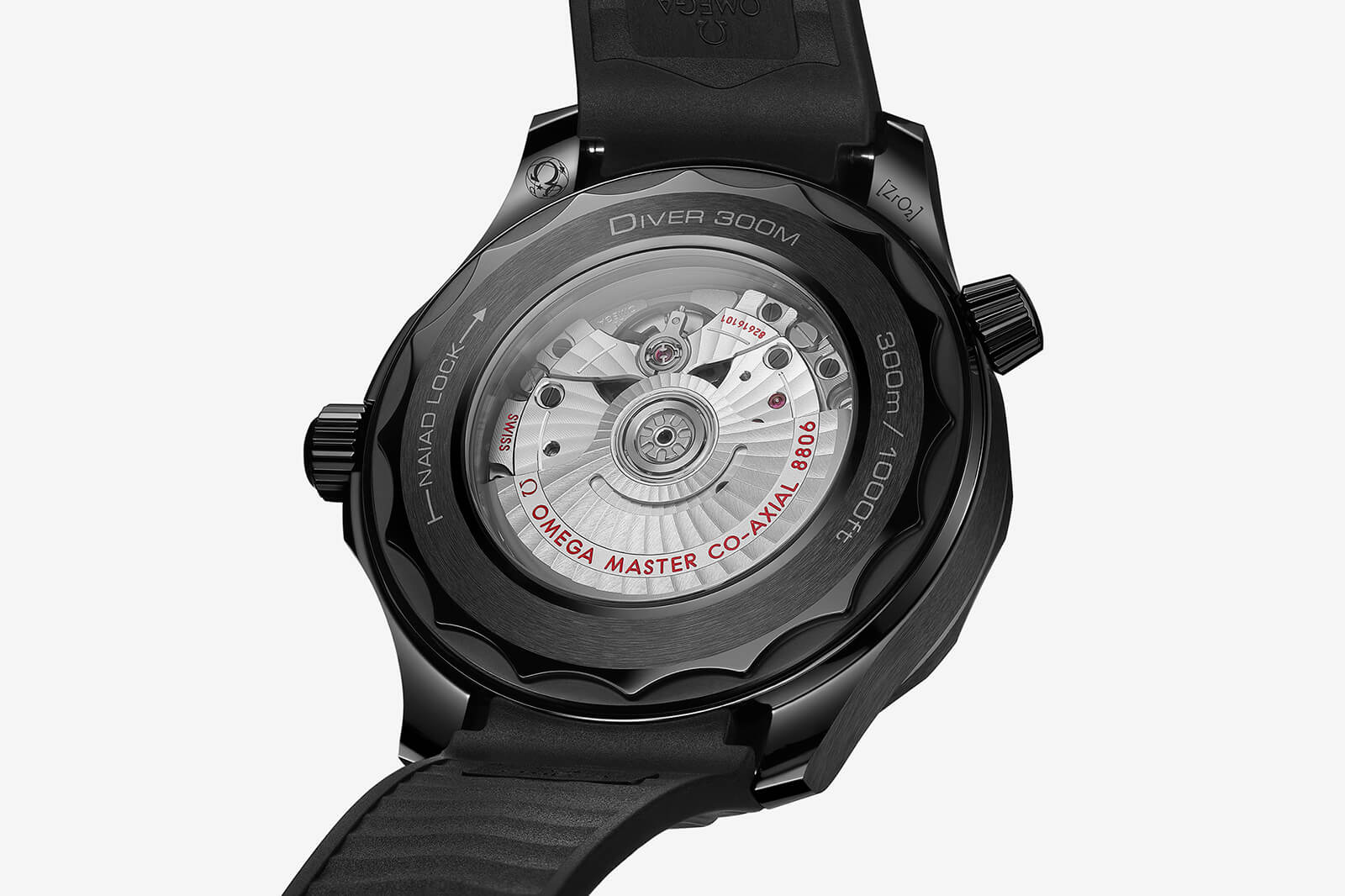 On the back of the watch you’ll find a sapphire crystal display caseback that shows off the internal movement. The Co-Axial Master Chronometer Calibre 8806 is certified by METAS and adheres to all the highest qualifications of a master chronometer, including great magnetic resistance and accuracy. The automatic piece has a 55-hour power-reserve, which is good but feels slightly off considering that the majority of the Omega releases announced at the same time have longer power-reserves and this is nominally the most rugged, endurance piece of the lot.

Ultimately though, it lives up to that rugged nature with 300m water resistance and an integrated rubber strap that is also, surprise surprise, black. The strap has the added durability of a ceramic buckle and the watch itself has a ceramic crown and a ceramic helium escape valve for the same reason.

Blacked-out divers have an undeniable air of mystery and coolness to them, with a hint of menace that makes them really popular. David Beckham is known for having an all-black Sea Dweller, which is particularly special not least for being a custom piece. The Omega Seamaster Diver 300m Black Black is a good way to add the same kind of feeling to your collection, without having to be an international superstar. We just wish they’d spent longer thinking of a name for it…